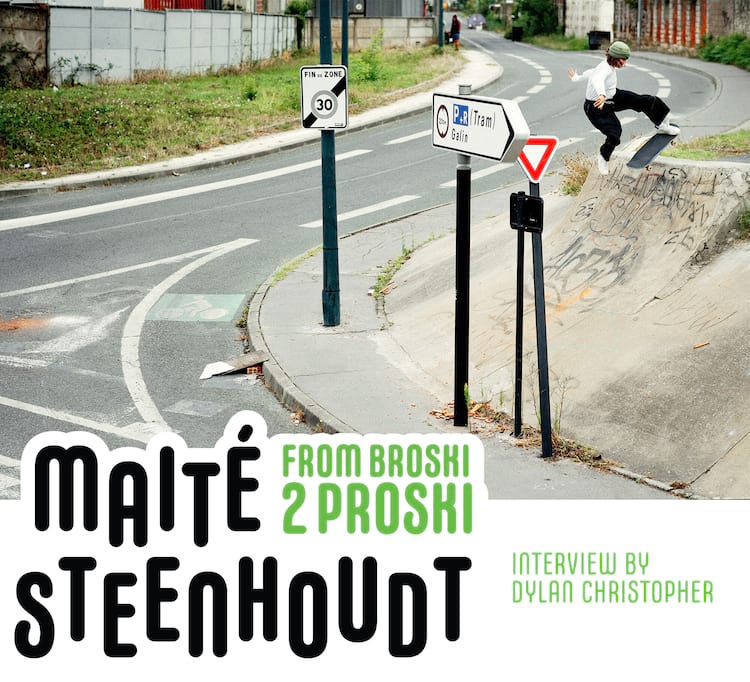 No-comply to disater on some French concrete     Photo: Perimony

After bursting onto the scene in 2019 with a full part of pure fun, Maité's been serving a steady stream of stoke with her Belgian hype squad. Catch up with the lovable landsledder as she navigates travel restrictions and finishes her debut part in the professional class.


Heavy sessions and surreal skits, Maité brings it all together in this imagination-expanding part

What’s up, Maité? How are you?
I’m good! The premiere yesterday went great.

Did you party hard?
Not really. I drank a lot of beers, but it was just chilling. I went to a friend’s house after; it was chill. 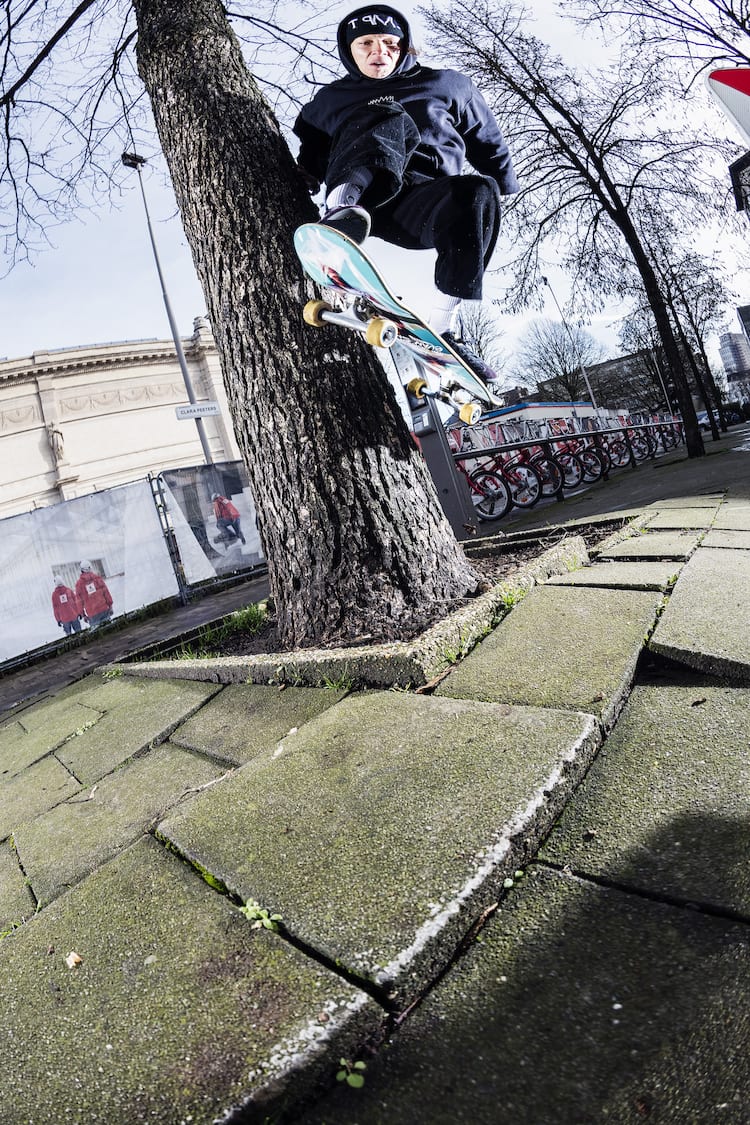 Wallie off the tree onto some truly awful ground     Photo: Pires

And how was the premiere?
It was really good. It played in time segments, so I saw the video like 50 times.

Because of COVID you had to go in small groups, right?
Yeah, we’d watch it for 15 minutes and then the next group comes in and we’d watch it again. So I saw it a bunch of times and I drank like a beer or two every time. So at the end I was like, Fuuuck. 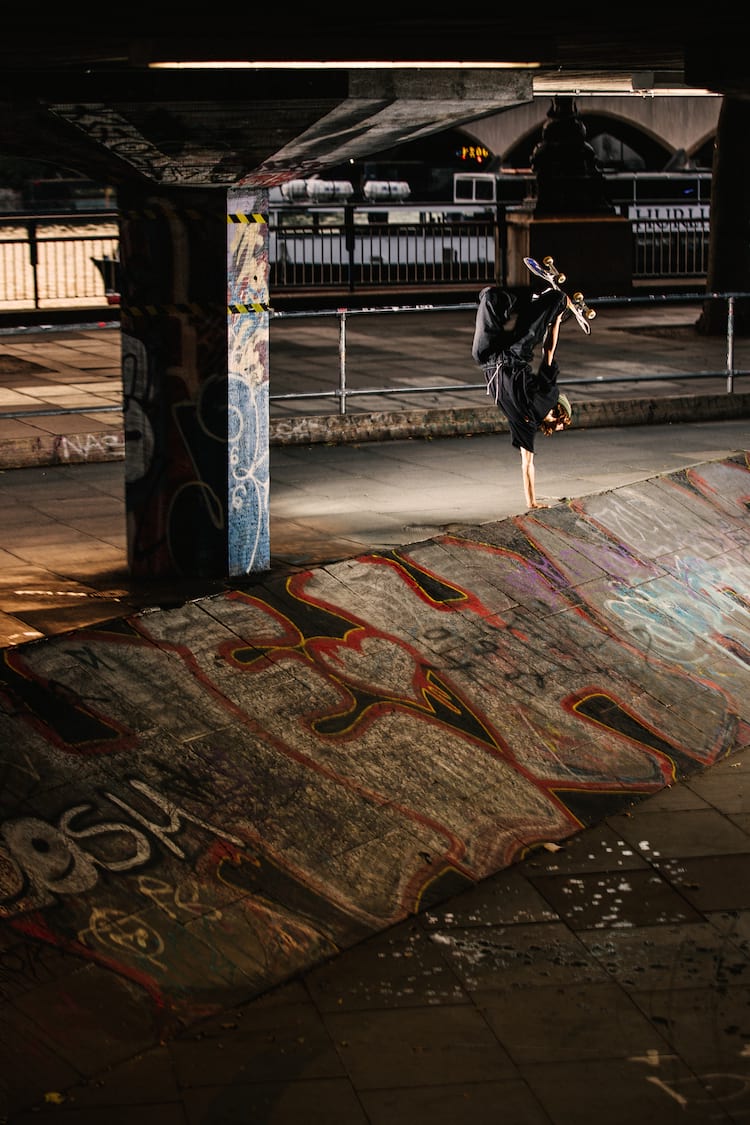 Where did it premiere?
At Lockwood skateshop in Antwerp, Belgium.

Are you from there?
Yeah, born and raised here. Let's go!

Tell me a little bit about the video. How was the filming process?
Fucking amazing. It’s pretty funny, because when we couldn’t skate we just filmed the sketches, so we always had something to do.

You incorporate skits into a lot of your video parts. Have you always liked acting?
Ah, it's just for a joke. I’m not trying to have an acting career. But this time I told Guillaume, “Fuck, we might hit Hollywood with this one.”

How was it working with Guillaume?
Oh, man, chill always. With Guillaume you know you’re making something good, you know? Plus, he’s just a good friend of mine from over the years, which makes it easy. I think I’ve known him for two years now and he’s become a good homie. 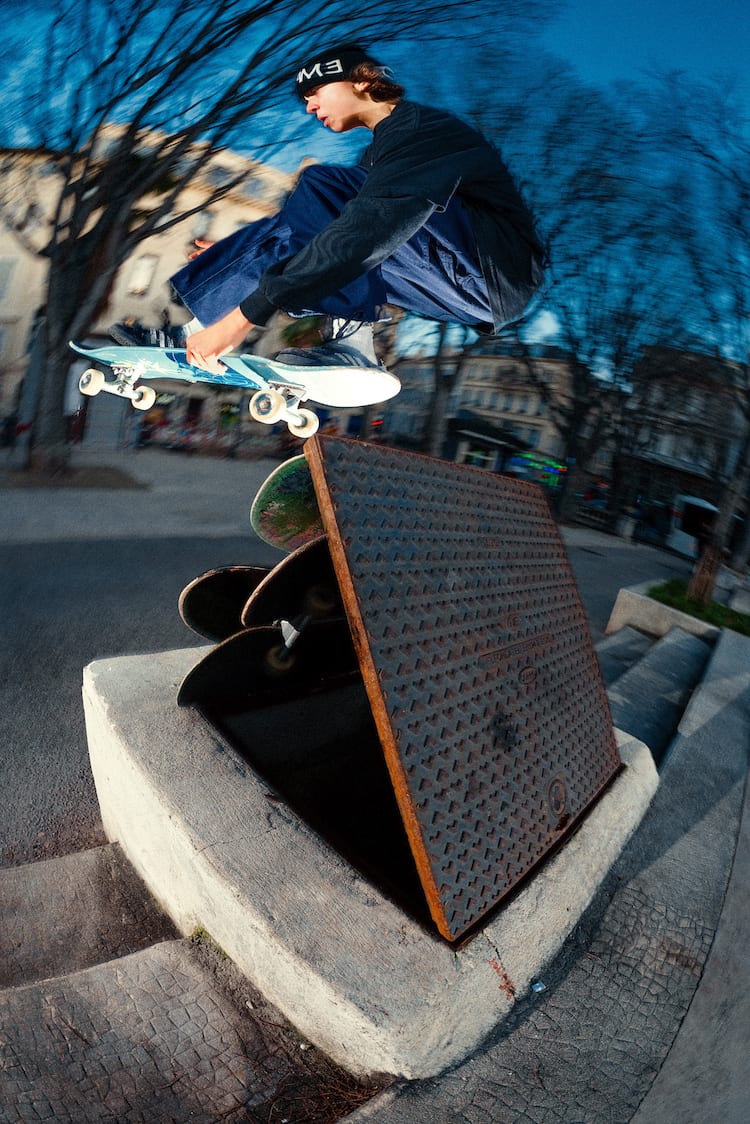 Wallie grab off the board-stack bump. Good thing she's got a lot of friends     Photo: Perimony

How long did you guys work on the video? Was it hard to travel and film during COVID?
We began around August, in London, and I think we filmed in total for like seven months, but we took the biggest break ever because of COVID. We didn’t end up taking that many trips, but there was a break in the middle. So I think in total we filmed only around three months. But it’s super easy to travel in Europe right now if you just take the train. The government definitely scares you and it’s kind of taboo to travel, you know? But you can fill out some forms and you’re good to go; they don’t ask questions. It’s kind of insane.

Yeah, I filled a paper out for you. Did that work?
Yeah! It worked perfect. Going to France is pretty easy, too. Marseille was the most insane for sure. Because right now in France they have a curfew at 6 PM. But in Marseille it just doesn’t exist—because it’s Marseille. Nobody gives a fuck and everyone will be outside still and the police don’t even care because everyone is doing it.

Wow. You guys had a little crew that you were with, right? This part is mainly you, but there’s a lot of cameos in it.
Yeah, we did a lot of doubles, too. I wanted to have the first half be doubles with all the homies, plus the homies that we met while filming. Donald has a big piece in it. Donald is my best friend here from Antwerp and he skates so good. When you see the sloth in the video, that's his part. But all the doubles were definitely what I was the most hyped about, I think.

So what are you calling this thing?
It’s called From Broski 2 Proski.

No-comply shove from poleski to roadski

Perfect. Speaking of Proski, you just turned pro! How did that happen?
I don’t know. You tell me! It happened so fast. Evan Smith sent me a message to see if I wanted to get on UMA and I was like, Uh, yeah, why not? That’s how I remember it, but it’s a bit hazy. It was a good day; the sun was shining; it went so fast.

Then we had all your friends at Lockwood surprise you with your boards one night. That was actually kind of hard. We had only just got the boards in and we wanted to surprise you before we launched the brand. I think maybe two boxes of boards got lost somewhere.
I heard a lot of boards went missing. Maybe some UPS guys have a garage skateshop with UMA boards somewhere?

Well, we definitely owe you a big party when we can come out and see you.
Let’s go!

You’ve also got a shoe you’ve been working on with adidas, right?
Yeah, It’s a Samba and it skates great. But I stepped in shit like five times already in it. Other than that it’s really great.

Wait, you only have one pair?
Well, no. But for the video I only skated one pair. I had fresh ones and I had the first sample that we got. The first sample ones looked good but didn’t skate that well. Then the second pair were so good, I couldn’t take them off.

When do those come out?
I think in March.

Damn, you’ve got a lot going on. All at the same time!
Yeah, it’s fucking insane.

How has it been skating with everyone at adidas and going on trips with Gonz?
It’s a dream. I was so stoked when they told me they were going to get me on a trip with Gonz. I was like, No way, you guys are just tripping. And then sure enough, I was on a trip with Gonz. It’s insane. You see him only in the skate videos and I never thought I’d get to skate with him ever in my life. 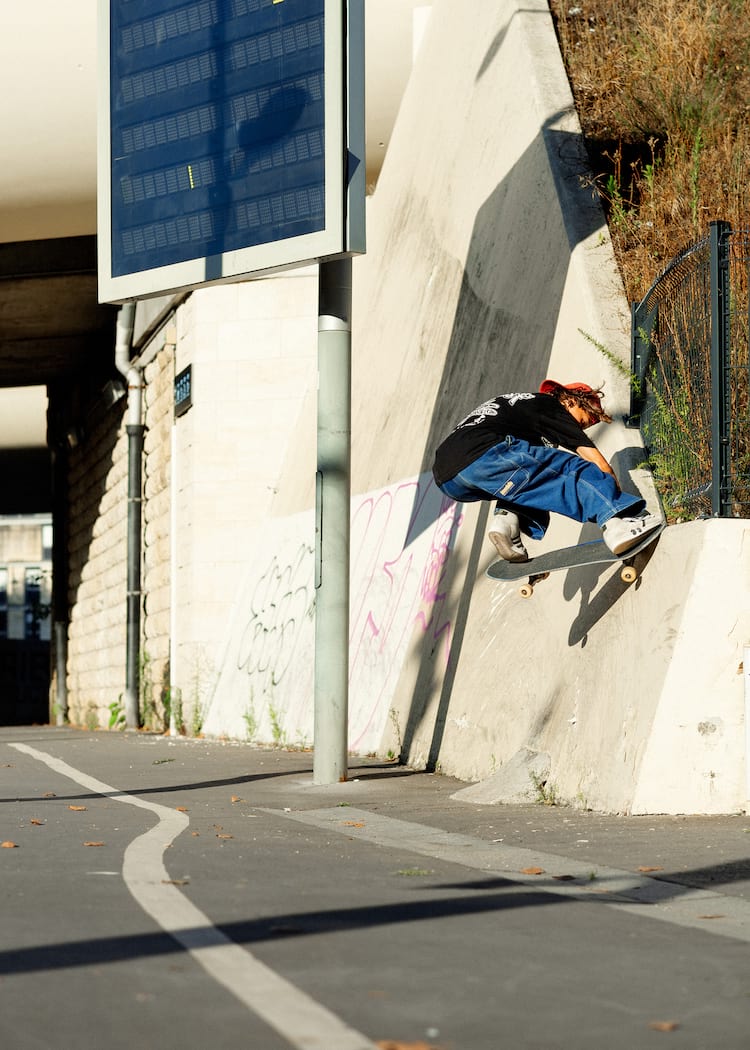 Skating with Gonz will help with the unique moves, like this steep ride to front nose     Photo: Perimony

That’s sick. You seem to vibe well together. You both are free with your skating and just having fun.
Yeah, I mean—I can’t compare myself to Gonz. He’s a legend.

Are there any women that you look up to in skateboarding?
Nora, of course, right from the start. It’s sick because now I know her. I still look up to her, but more as a friend now, like how I look up to all my friends. And of course Elissa Steamer. She’s a legend.

That’s a pretty good list. Hey, I always see people commenting about your pants. What’s up with that?
Oh, it’s insane. I’ve tried to respond on Instagram but now I’m like, Fuck, sorry, guys, this is too much. I don’t want to share my pants information anymore. It's a friend of mine who makes them—Loutre. I try to shout her out so maybe she can make some money. People can buy their own shit, man, or find it. It’s not so hard. We don’t want everyone wearing the same pants anyways. I mean, I don’t care, really. It’s funny. 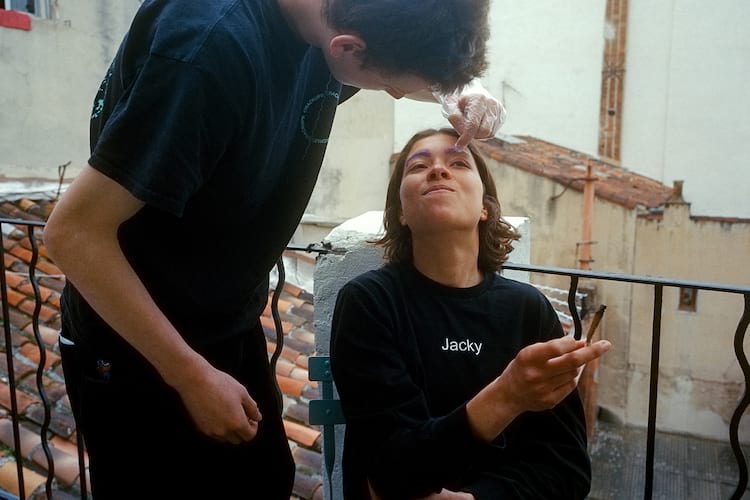 Well, you seem like you’re always having an amazingly awesome time. Has it always been like that for you?
Yeah. I mean, now it is a bit chiller because I don’t have to go to school. I finished it all. Now I can do what I want to do, so it’s a bit better than before, but I think I’ve always been a pretty happy person. If I can just skate, chill with my friends and go to amazing places, then I’m always having a good time, you know?

Well, I think we can all learn something from you. What are you most looking forward to when things get more back to normal?
Shit, meeting you guys in real life. That would be sick.

Yeah, we gotta figure out where we are going to go for that.
Yeah! Are you guys going to come to Europe?

I want to. I hope that’s not too boring for you, though, since you live there.
No, it’s good! Let’s go to Europe! I’m here already, so no jet lag for me. Maybe I can be a spot guide? Maybe Marseille? I’ve still got unfinished business there. 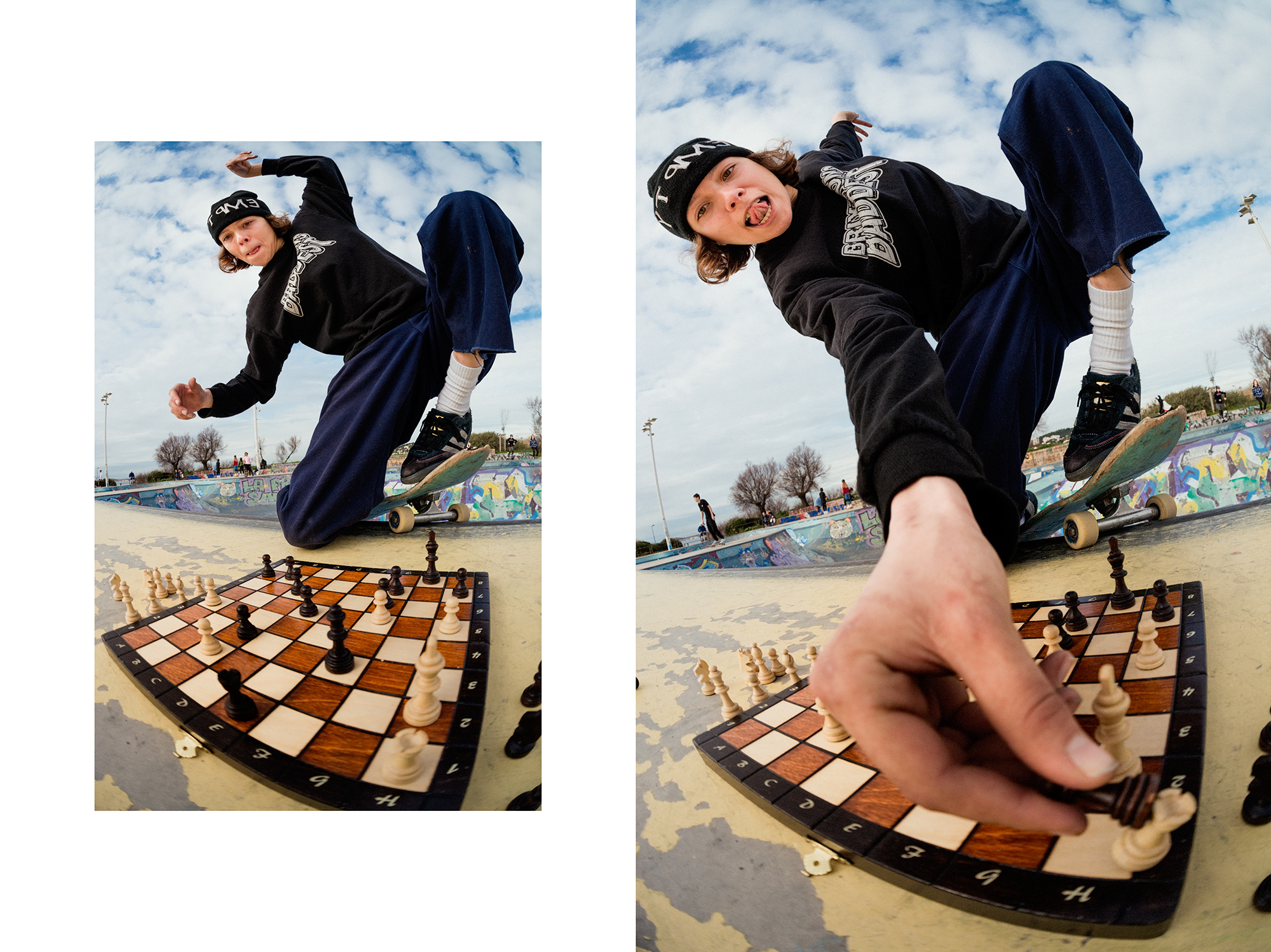