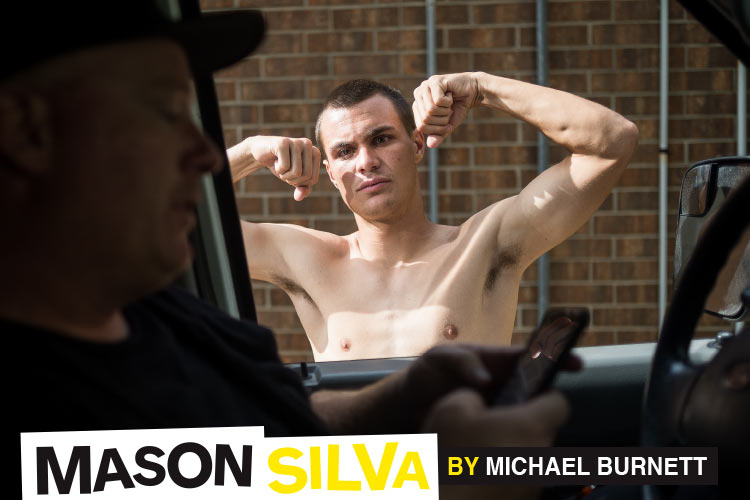 Of all the Scramblers, Mason Silva seems the most like an athlete. That’s not a bad thing; he’s just serious out there, with a hockey temper to match. But after the boards are broken and the hammers dropped you couldn’t get a more laid-back bro to hit the road with. Mason’s definitely pro material.

Twenty-four, 25, yep. You never know, there used to be a lot of 28-year-old ams. But not anymore, now that we got these kids out there.
Yeah, everyone’s hungry.

Were you offended at all at your Sponge Bob Square Head award?
No, not at all. I think that’s as lightly as it could have been put. I’ve actually never heard square head; it’s usually just big head.

On this trip one of the quotes I have from you was, “It’s really easy to feel like you suck on this trip.” What was the vibe like?
Really, really gnarly rails that have at least eight kinks in them. So if you’re not doing that you feel like you’re not keeping up.

If you’re not riding down gigantic kinked rails you may not have it. We had curved rails, we had rails against walls, kinked rails, bank to rails.
We pretty much skated every kind of rail there is.

We didn’t set out for this to be a rail trip or just to have rail skaters. I tried to get a good variety, but Jesus we went to some rails.
Yeah. I think it’s just the area we were in has a lot of rails. It was cool, though. 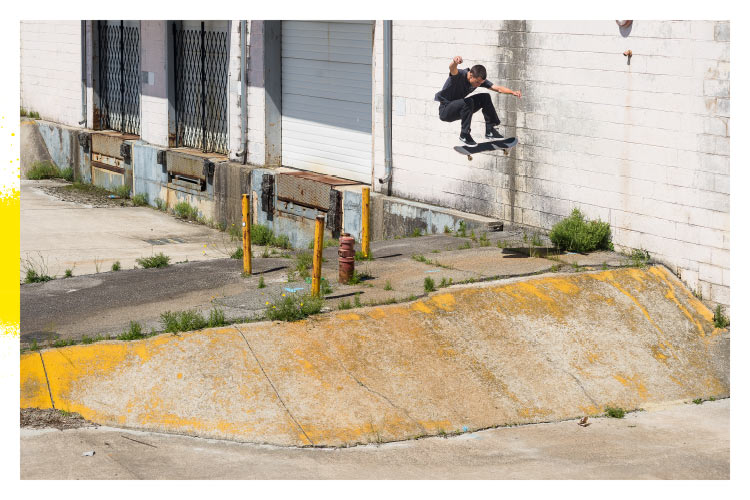 Two trips to Bojangles in one day? Mason would’ve never even got this frontside heelflip off the ground!

So you’re bros with a lot of these guys. Is there anybody on this trip that you didn’t know very well that you were stoked to get to meet?
Yeah, Winkowski. I had never met him or even seen him in person. Which was cool to see him, just the way he goes about skating. He pretty much doesn’t say a word all day but then will just do the gnarliest tricks and then he’ll disappear for an hour in the woods.  He’s definitely one of a kind.

Yeah, he felt like the grown up on the trip, like, “Ah, there’s a man.” That man in the back seat. He’s incredible. How are your handplants?
My handplants are very poor.

Yeah? Can you do them?
Nah, I can only stand on my hands for a second or two and then I’d probably go down. Winkowski’s shoulders are pretty gnarly looking. I think he’s pretty built for it.

Yeah, he’s a very physical person. So we went to that long-ass rail with no stairs. Was that the longest bluntslide of your life?
Yeah, for sure. I was just bailing into the grass and then one of them I just tried to act like it was a boardslide on my tail. Kind of just lean over straight.

That thing is like 12 feet longer than El Toro.
Is it really? I’ve never seen El Toro.

It’s not that long, but obviously El Toro’s got dangerous stairs. But yeah, that was quite a hold for a bluntslide.
Well thank you.

So on this trip, inadvertently, part of our voyage to the South was that we were constantly bumming out people at churches.
Yeah, we had a theme of just pushing matches. 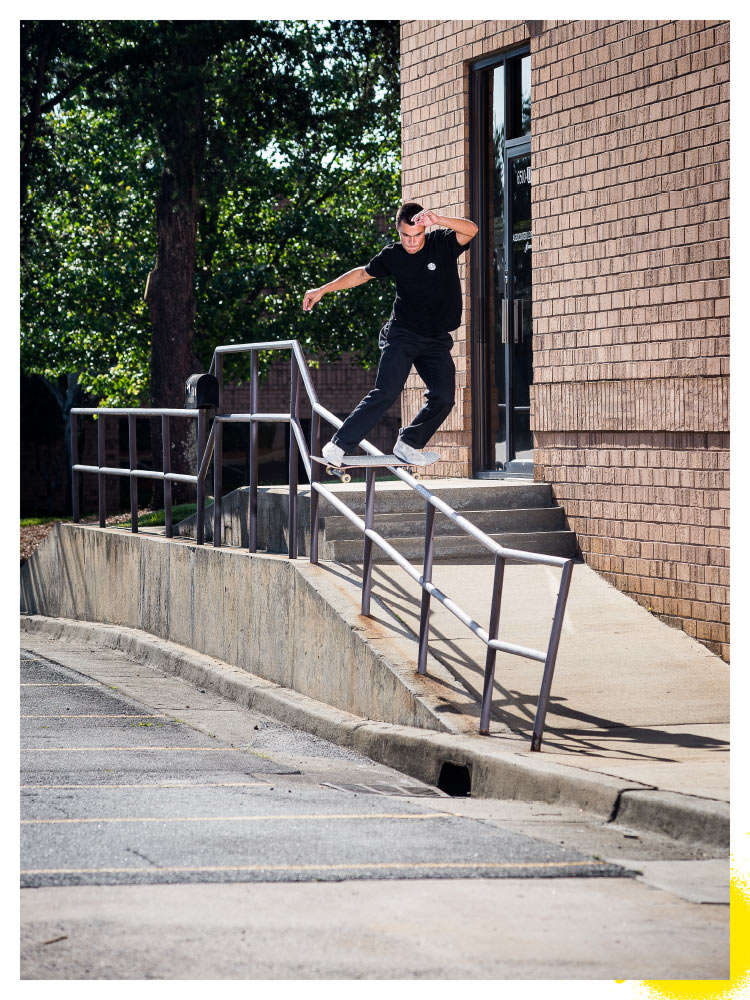 A theme of light shoving matches. Where do you draw the line as far as skating spots and bumming people out?
If you have to get physical with the person, like, if they want to stand in the way then it’s just, “Okay, we’re out of here.” But I’d say once you start pushing them I think you should probably get out of there. Which is what we did.

More or less. Except for when the janitor tried to arrest Jamie.
Shit, what was his name?

There seemed to be a real concern with law and order on this trip.
Yeah, and with the guy with the gun.

Yeah, we had a church guy with a gun, we had the arresting janitor and then we had that one really sad guy who was so disappointed when the cops came and they didn’t do anything.
He had the most confused look on his face when the cops said that we could leave.

He was, like, “Aren’t you gonna taze him or nothin’?”
Isn’t this what the police do? Yeah, that was my favorite one. Where nobody pushed anyone and it was just really funny to watch.

How would you rate Sinclair as a road manager?
Oh, he’s good. The one thing you gotta watch out for is eating too much chicken or something. He’s a great guy.

Yeah, some of the restaurants were fucking up the European guys. They didn’t know what hit them.
Yeah, and it was the exact same food every time. Or Bojangles’. Some of us didn’t even want to get out of the van.

What do you do when everything on the menu is khaki colored?
I had a full-on day of khaki meals.

Yeah, get that Whole Foods in and you got it.
Avocados and whatever you want, but just try to stay away from three khaki meals a day.

What was more shocking, Ducky taking it to the dome or filmer Jevans’ third nipple?
Dude, I never even got to see Jevans’ third nipple. I thought it was a rumor and these dudes were telling me about it and I didn’t want to ask him, but did someone see it? 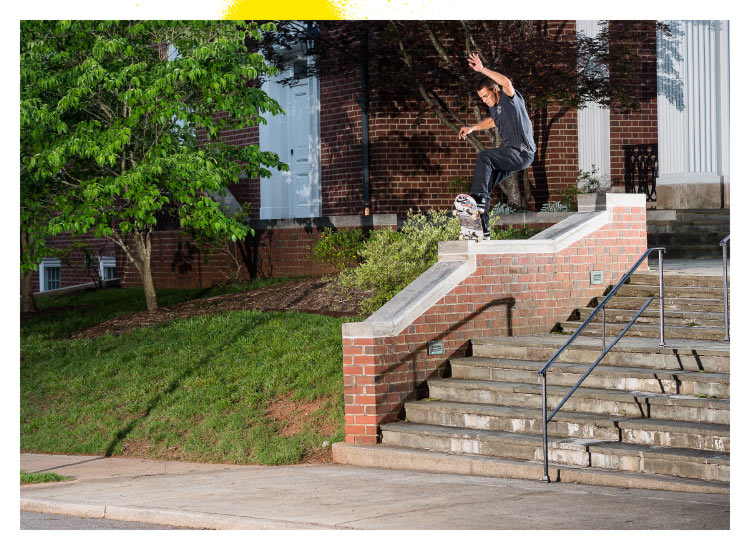 Five-O flyout and another pissed off church parishioner

Yeah, he showed it to us.
Dammit. I think what’s more shocking is that Jevans would not wear pants.

Yeah, Southern filming legend Jevans—only wears shorts and has a third nipple.
Yeah, it’ll be 30 degrees out and he’s wearing a big sweater and shorts.

Did you know Ducky before this trip?
I had skated contests with him a while ago and he kinda would slam at those too. I saw him sack a few rails at a contest, so I knew that was comin’.

How would you describe his approach to skateboarding to someone who had never heard of him?
I think he doesn’t even like to really look at the spot before he tries it. It’s kinda, like, “Okay, I’ll figure it out as I go.”

Dude.
He definitely blocks it out of his mind for sure.

He’s so gnarly. What went through your mind when you saw him trying that wooden rail at the end?
Oh yeah, I went to the gas station. I couldn’t watch. Sorry, Ducky, but that was too crazy for me to watch. I saw when he was sliding his board over it and there were nails sticking out and there was wood that was higher than other wood. I was just, like, “This is not a good first spot to go back to.”

He still had stitches, a broken collarbone, so he decides to do a giant rail made out of two by fours.
The craziest rail. I’ve never even seen a rail like that. It was so weird.

What went through your mind when Tyson came out of the thrift store in that mint-colored full suit?
That’s everyday for him, dude. In Long Beach, wherever he is he’s just, like, “Oh hey, I gotta go to the thrift store before I can skate today.” I think that might have been a mellow outfit for him. That’s just Tyson. He just loves it and it’s so sick to see him getting into it. 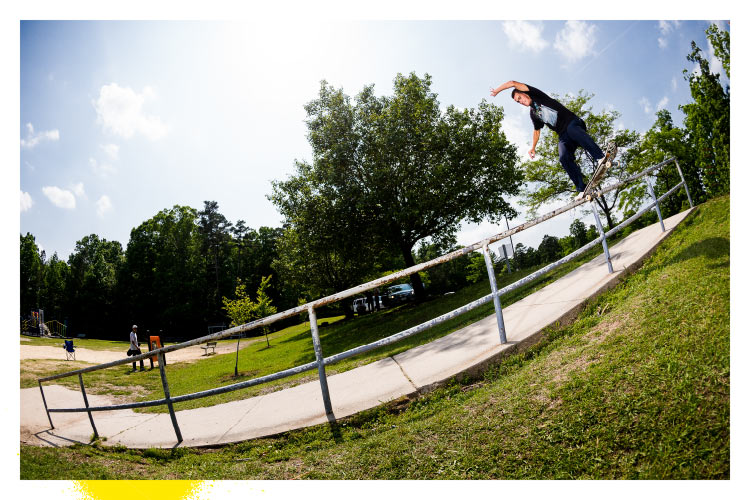 Bluntslide Hall of Fame, here he comes! Silva rides it like a boardslide

Do you think all of these guys are gonna be pro within the next year?
Yeah, I think you picked them pretty good ’cause being on that trip and watching them skate, it’s like all of these dudes know how to skateboard like a professional. It was a really amazing trip.

It was shocking.
Yeah.

What was the thing that’s gonna stick in your mind the most about this trip?
It might have been just that first day when everyone was at that long rail at the top in the smallest space possible, but everyone was doing the gnarliest tricks.

Oh, the triple-set rail? That’s the first photo in the article.
Yeah. That was, like, “Woah, this is gonna be a gnarly one.”