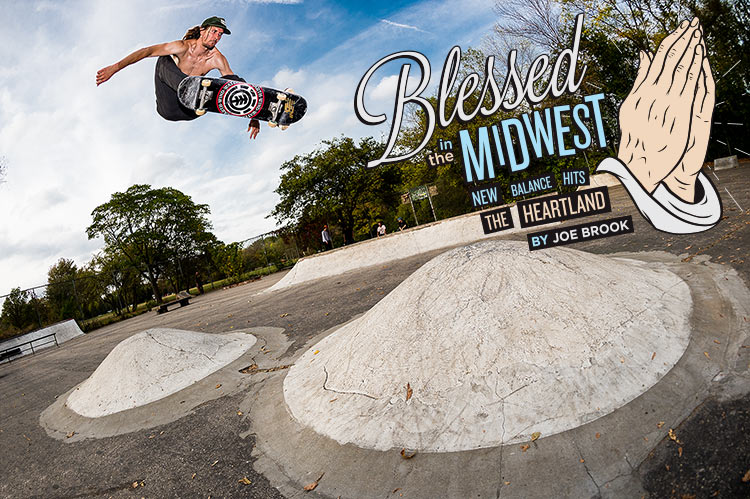 On our first day in Milwaukee, Franky Villani was taken to a crazy kinked rail. There was a huge four-inch crack in front of it and everything about the spot was insane. Franky ollied over the crack and the top of the rail, landing in a 50-50 and then body surfed down the bar like a Slip ‘N Slide. A few tries later he sprained his ankle really bad and decided to take a break. I thought he was surely done skating, but minutes later he went in for round two. Once again, he escaped some heavy slams but ended up spraining his other ankle. He was pissed and broke off. Then he went into Terminator mode and 50-50’d the rail perfectly—with two sprained ankles! We were all in awe and had ice waiting for him when he landed. As he sat on the sidewalk icing both ankles, the neighborhood kids were tripping. They couldn’t believe what they’d just witnessed. Skateboarding may be on every corner in California, but in America’s Rust Belt it can still be an oddity. 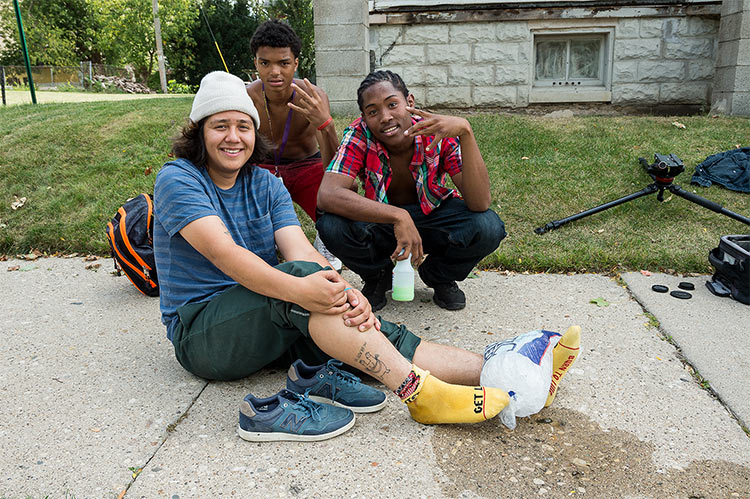 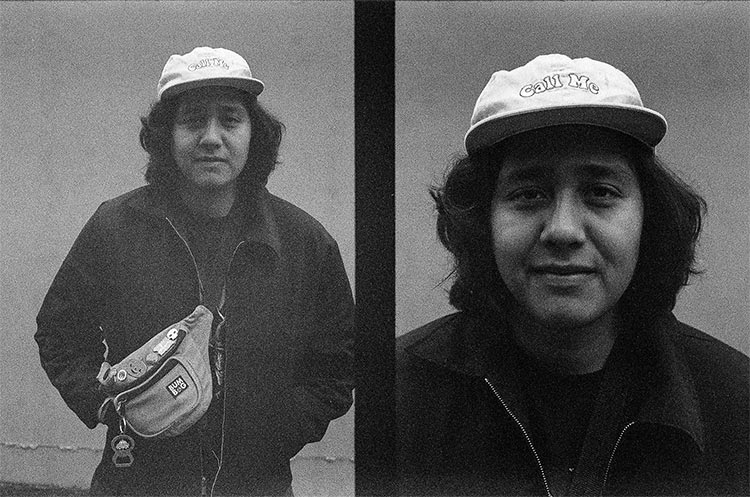 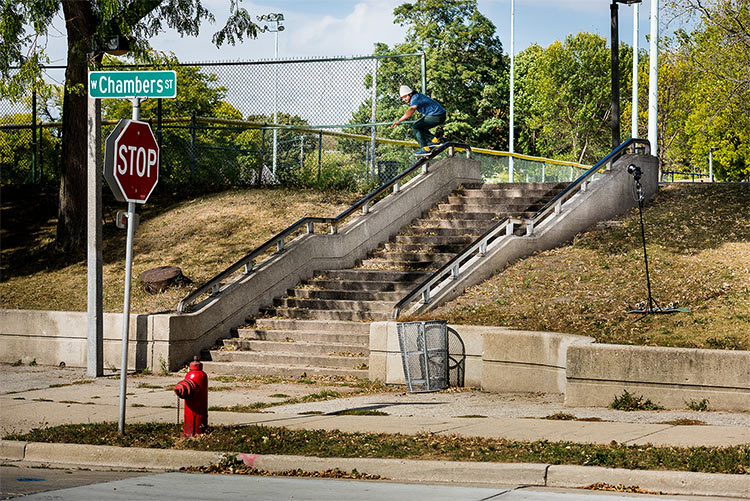 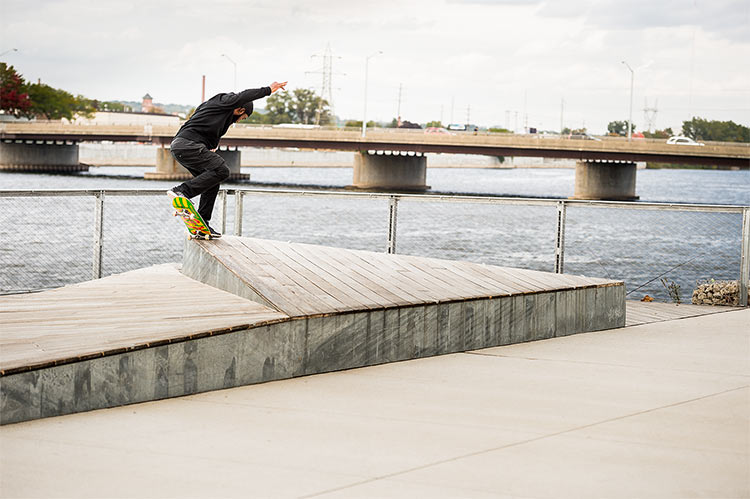 Kalis removed the skate stoppers and Marquise Henry replaced them with a front crooks pop out over the gap. DGK all the way 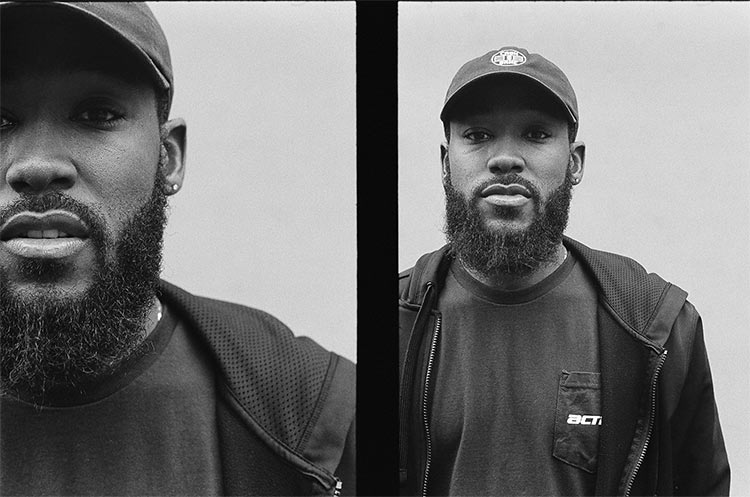 The Midwest holds a special place in my heart. In 1989, when I was 16 years old, I took my first real road trip with my friends from Detroit to Chicago to watch the Chicago Shootout contest. It was a six-hour drive and there was no digital navigation at the time. We used paper maps and called our hotel from a pay phone to find out what exit we needed to take off the freeway. When we pulled into the hotel parking lot, there, sitting on the curb, were some of our skateboarding heroes: Ray Barbee, Danny Way, Ron Allen, Tom Knox, Lance Mountain, Tommy Guerrero, Jim Thiebaud and Mike Vallely. It was surreal. At the contest we saw Jason Lee and Mark Gonzales. Mark’s hair was dyed red and Jason’s was dyed blue. They had just started a new skateboard company called Blind. All the pros practice runs were next level and rookie pro Tom Knox won the contest. While at the contest we met some local skaters and they took us to spots around Chicago. We had the city to ourselves back then. Marble plazas with perfect ledges and stair sets were just begging to be shredded. We skated some insane curb cuts called The Hips that were like small jump ramps. After our initial trip, we spent almost every other weekend driving to Chicago to skate. The floodgates were open and from there we traveled to Wisconsin, Ohio and other neighboring states to explore and discover new spots. To this day, I jump at the chance to travel back to the Midwest and revisit the places and people I hold so dear to my heart. 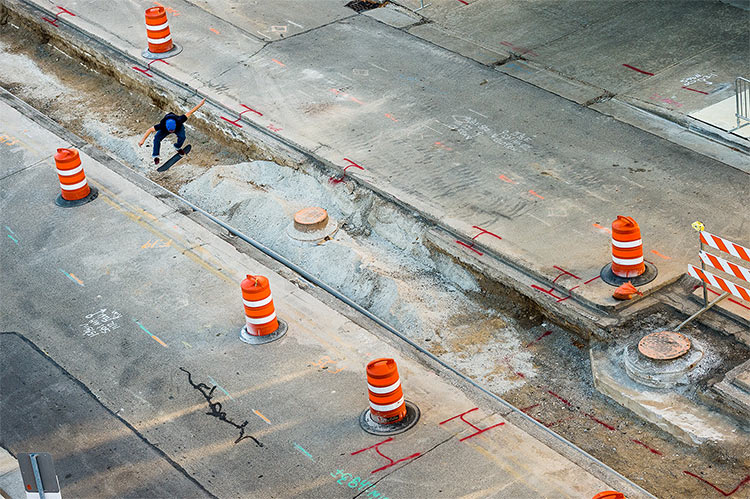 He’s from the Midwest so a little rubble is no trouble—Davis Torgerson, crusty kickflip

We started this New Balance trip in Minnesota where we met up with good friend and local legend Steve Nesser from Familia skate shop. He set us up with Pizza, a local filmer to help us out with spots. Pizza earned his nickname as it’s pretty much the only thing he eats. He was an epic tour guide, helping us clean out algae-filled fountains and pointing us in the direction of good restaurants, which of course always had pizza on the menu. Sam Hitz was starting Larbfest in MN the same weekend we were there, so we got to see a lot of the good homies that were in town for the event. It was complete metal mayhem. The sounds were dark and glorious, the vibes were high and the zine booth had lots of amazing visuals to gander at. Larbfest is a must do and I’m glad I finally got the opportunity to attend. 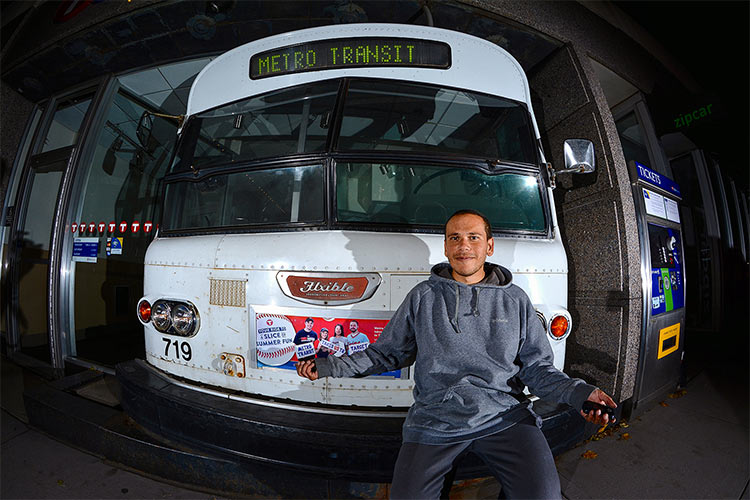 And who gave you the nickname Pizza?
My Mom, actually. It was the first food I ate after my parents adopted me in Colombia when I was nine months old. After that, all I ever wanted to eat was pizza.

What are your favorite pizza toppings?
Green peppers and black olives.

How about a favorite pizza place in Minnesota?
Cossetta’s pizza. 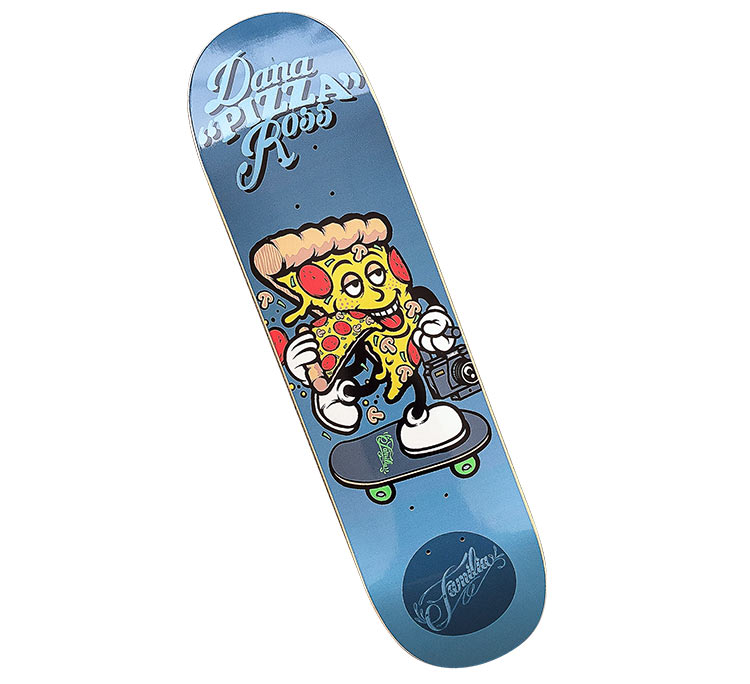 What else does Pizza like to eat other than pizza?
Veggie burritos.

How did you get into filming?
I was the guy in the crew that got stuck with the camera. But I liked filming.

Who’s your favorite filmer?
Dan Wolfe. I like his clean, simple filming style and his straight-to-the-point approach.

Who is your favorite pro skater?
Ricky Oyola.

Have you made any videos yourself?
Yeah, the one I made recently is the one that I’m most proud of. It’s called Autumn. The one before that was called The Last Slice. They’re both homie videos.

What’s up with the Pizza board that Familia gave you?
Familia does a thing called True Heads. It pays homage to skaters holding it down for the skate scene in Minnesota. Steve Nesser surprised me on my birthday when we premiered Autumn. They made me a board, a pizza box—with pizza in it of course—a t-shirt and stickers. Todd Bratrud drew the graphic of me as a piece of pizza filming. I was really honored. Thanks, Steve!

Any advice for filmers out here in the world?
Have fun with it and find out what works for you. 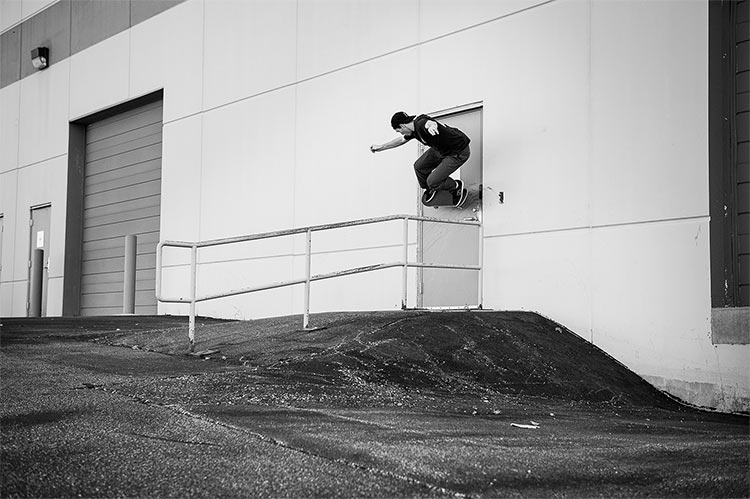 They say when one door opens, another closes, and then you ollie to wallride on it. Davis doesn’t disagree 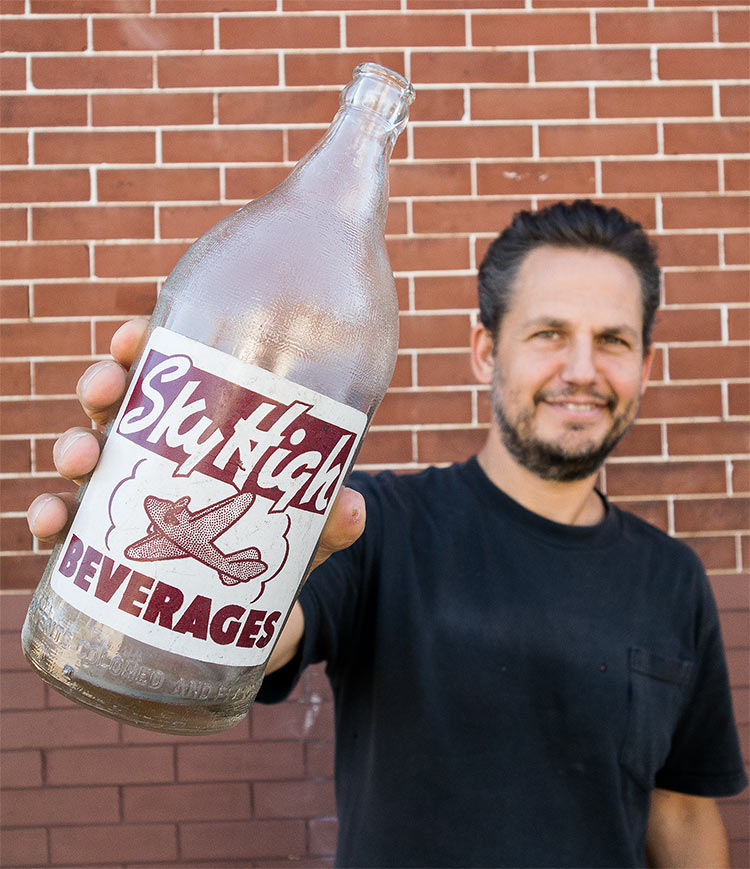 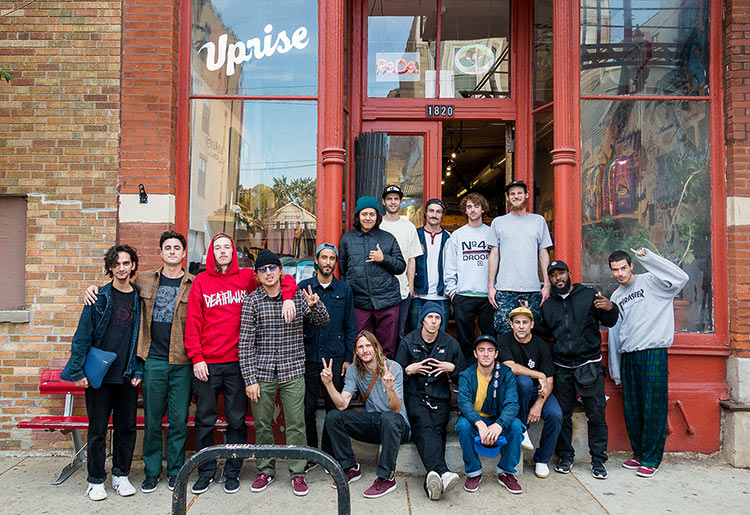 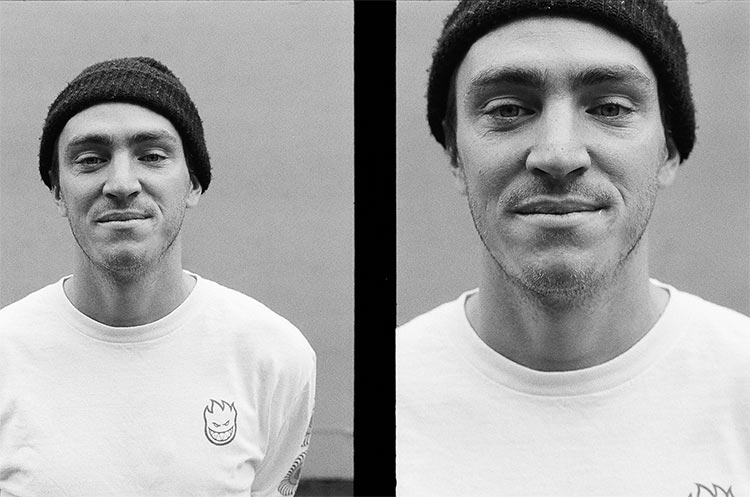 Milwaukee was our next stop: the land of cheese curds, meat sticks and beer. What’s not to love?! Aaron from Sky High skate shop hosted us. They’ve been in business for 30 years now, and I was so impressed with how much Aaron supports the local skate scene, including helping out with the Estabrook DIY. We stopped by and skated it and it was cool to see how many locals were there shredding. Skateboarding is alive in the Midwest because of shit like that. We heard that Explosions In The Sky were playing while we were in town. Levi Brown contacted our friend Jon Miner who knows the band and he lined up ten guest passes for us to see their show at the Pabst Theatre. I barged a renegade seat on the balcony and was ready. This was my first time seeing them perform live and it was amazing. Thanks, Jon and Explosions! 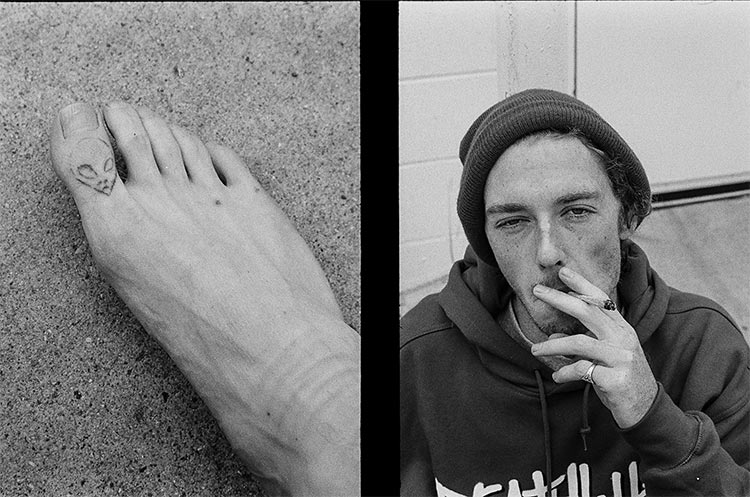 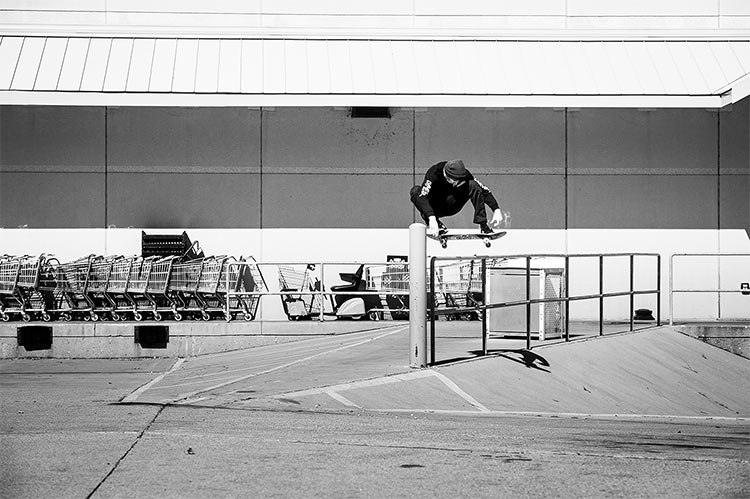 Toe tats and fat snaps, Jake Hayes has got ’em both

Chicago, one of my favorite cities to skate, was our next stop. Unfortunately, we were only there for one day so we had to make it count. This meant two things: first, we had to see the homies from Uprise: Uriah, Ken Keistler, Dave Ruta and Stevie Dread. I’ve been skating with these guys for over 20 years now. Second, we had to get our hands on some of that deep-dish post-skate-session pizza. This was non-negotiable. Chicago has a rich skate history and a solid scene. The Uprise locals hold it down hard for Chi-town and are always really helpful when teams come to town. As we were leaving town, Uriah told us Kalis was back in Grand Rapids and we should hit him up when we got there. Don’t gotta tell us twice.

Grand Rapids was our second to last stop. They, too, have a DIY park called Clemente, and Braydon Kavanagh and friends have put a lot of work into it. The locals all rip, were really cool and they showed us some good street spots to shred. Kalis arrived and he and the NB guys had a downhill flip-trick contest in a parking lot. The goal was to do as many flip tricks in a row until you imploded from speed. I don’t think anyone broke four flip tricks before speed wobbles took them out but we had a great time and it was the perfect way to end our day with Kalis. 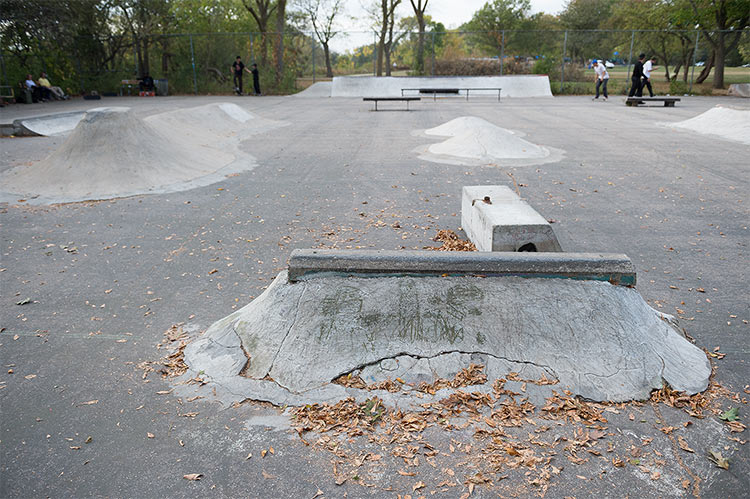 Founded: Early 2000s
Location: On the Estabrook Parkway between Hampton Avenue and Capital Drive
Who to know: Estababy and the Mayor
Rules: No painting and put your trash in the cans
Best feature: The Boomerang
Fun fact: A homeless guy lived at Estabrook one summer with his dog. He rode a BMX bike and built scrap ramps, using a rock as a hammer. 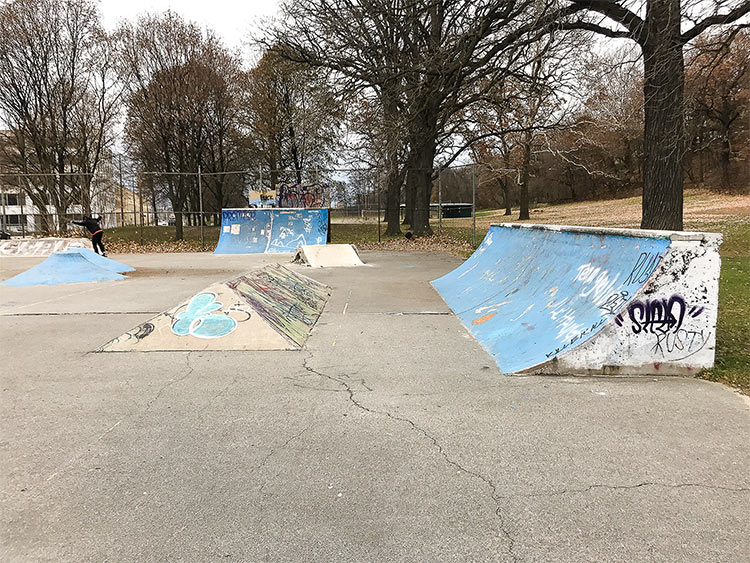 Founded: 2008
Location: On Godfrey Avenue SW between Martha and Rumsey Street
Who to know: Poole, Chris, Braydon, Joe, Josh, P and Hoag
Rules: Respect the spot, respect the people and clean up after yourself
Best feature: Slappy curbs
Fun fact: The first concrete obstacle at the park was a volcano poured around a tree stump pulled from nearby woods. The stump is still there today, buried under one of the boobs. 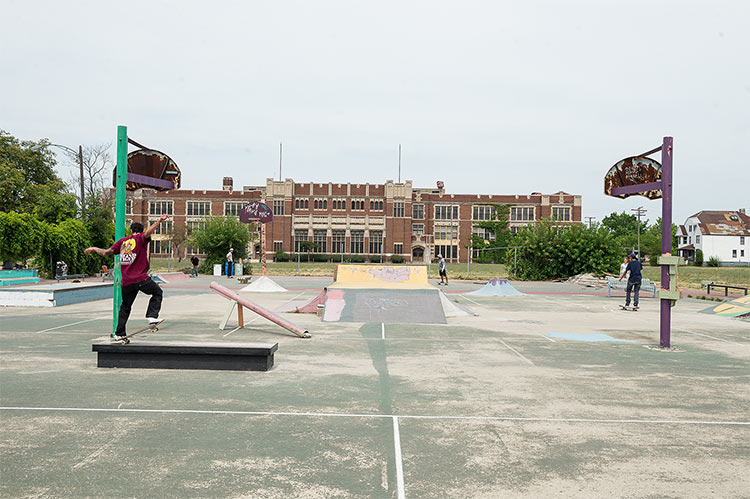 Founded: 2014
Location: Off The John C. Lodge service drive north of Martin Luther King BLVD
Who to know: Derrick Dykas; Amir and Rashad: the 11-year-old twins that live across the street
Rules: No jerks
Best feature: Hoe Check
Fun fact: The Wig has a “bag flow” sponsorship with Quikrete, getting pallets shipped out on demand. 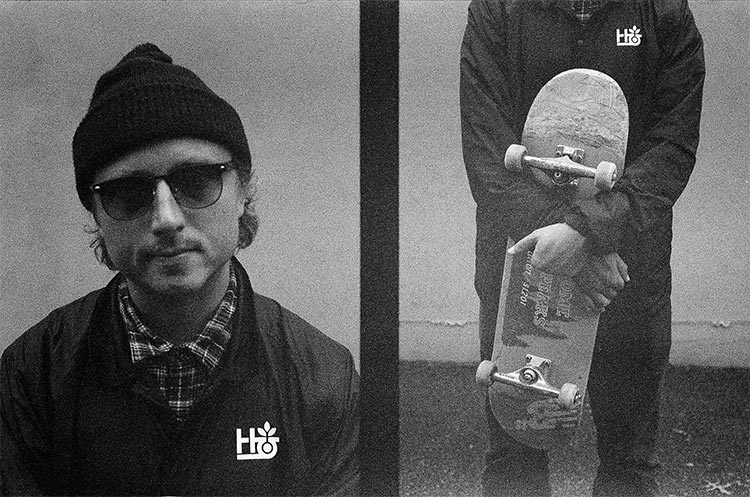 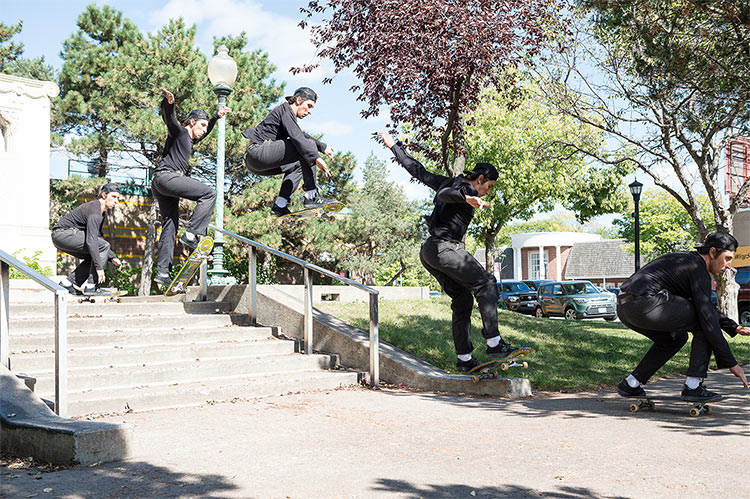 Over the rail to curb check, Tom K don’t play

The trip ended in my hometown of Detroit. We had Justin Bohl showing us around, and he’s one the best tour guides out there. Coincidentally, skate legend Ron Allen happened to be in town performing some music. I first saw Ron in 1989 at the Wind, Waves & Wheels skate demo in Grand Rapids. It was an H-Street/Shut demo. Sean Sheffey, Barker Barrett, Matt Hensley and Steve Ortega were there. Skateboarding was changing in front of our eyes. The skaters were doing so many new tricks we had never seen. It was mind-blowing. It was great catching up with Ron and reminiscing about our past. It’s crazy how things come full circle and this was one of those moments for me. Ron still kills it on a skateboard in his 50s! It’s really inspiring to see him doing what he loves and also MCing. 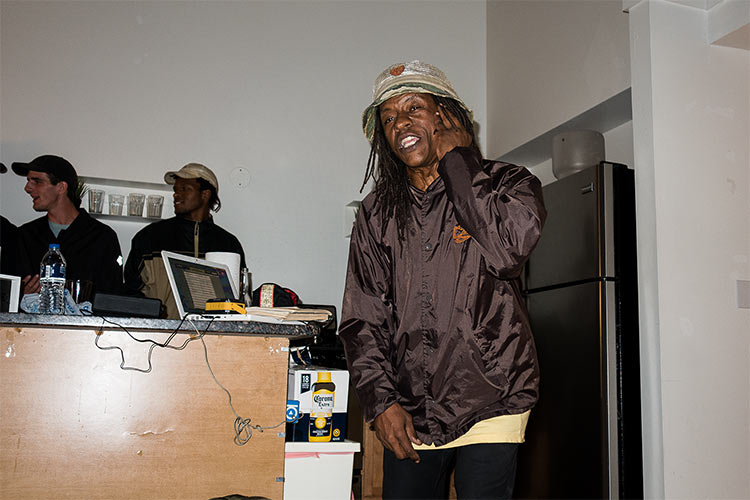 We asked if he would perform at the house we were staying at and he obliged. We had an old-school house party MC’d by legend Ron Allen, aka MC Intelligence. It was such an awesome way to end our skate trip, and Eminem himself would have been floored by the uplifting words Ron shed upon our squad. Thanks to all the brick-and-mortar shops out there supporting the scene, building DIYs and teaching the youth of skateboarding what’s up. Skateboarding would not be the same without you guys! And thanks to the Midwest skate fam for holding it down for the NB team. Big love for the Midwest. 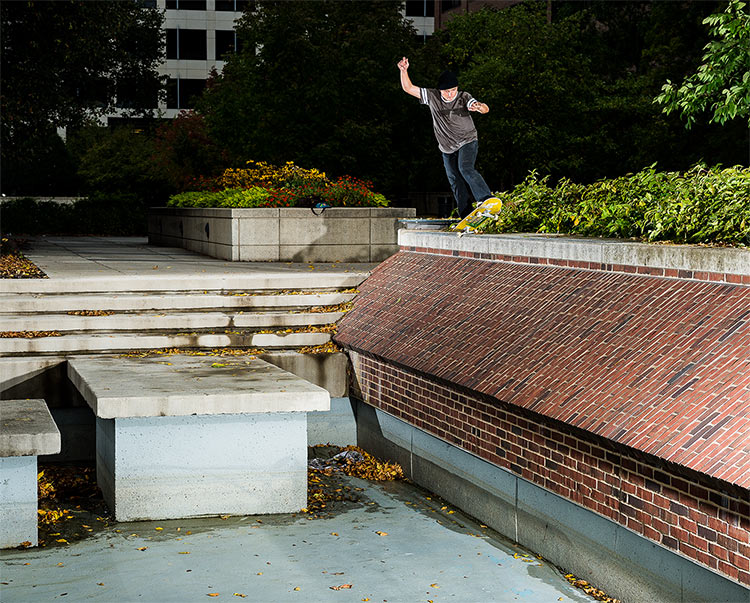 Pizza and his homie cleaned the algae out of this fountain so Marius could dive in with a backside 5-0. The Midwest really is the best!