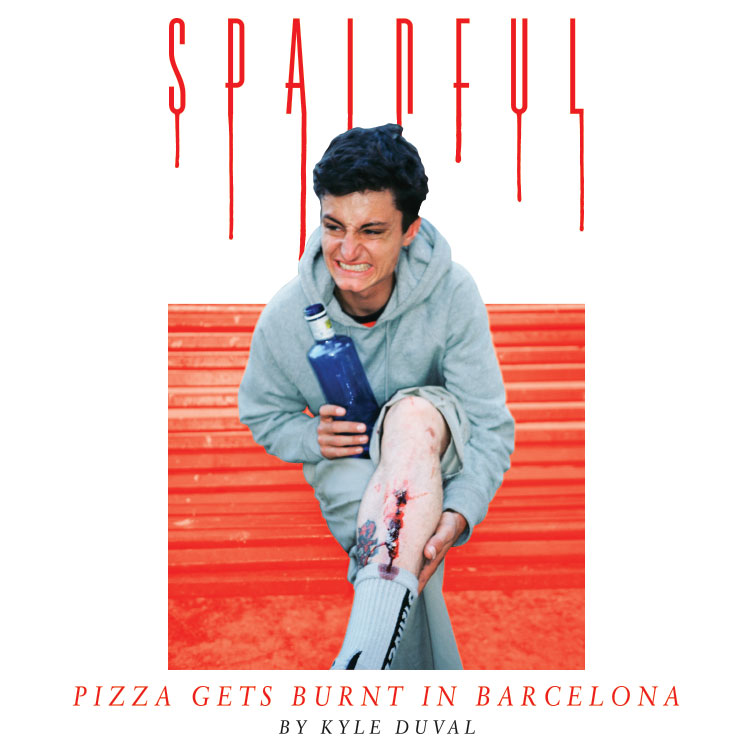 In addition to being one of the best skate cities on the planet, Barcelona is also a fucked-up fairytale land, full of mind-altering distractions and an inescapable nightlife vortex. And between Paca Reial, Jamboree, Betty Ford and street beers at MACBA, Spain brought the pain on this trip. Our mission wasn’t just plagued by alcohol-induced headaches, though. It seemed there was acloud of fucked-upedness following us every step of our journey. If you gotta pay to play, then we’re dead broke now. 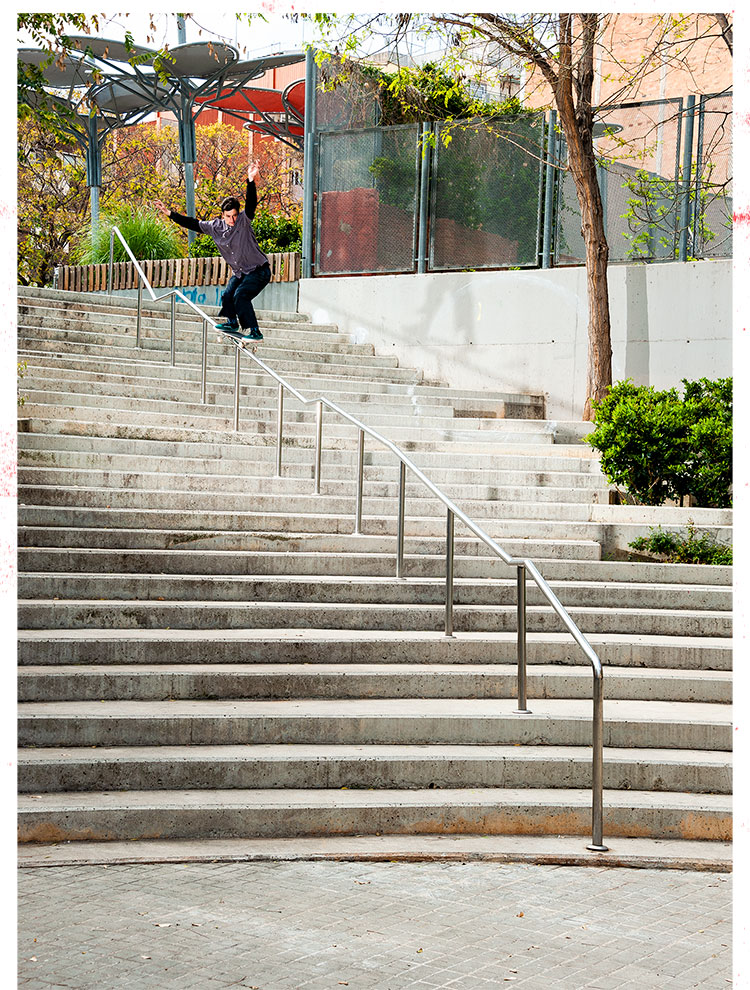 Ducky took a few hits to the dome before rolling away from this roller coaster of a backside 50-50. Trip MVP and reigning king of pain     Photo: Duval 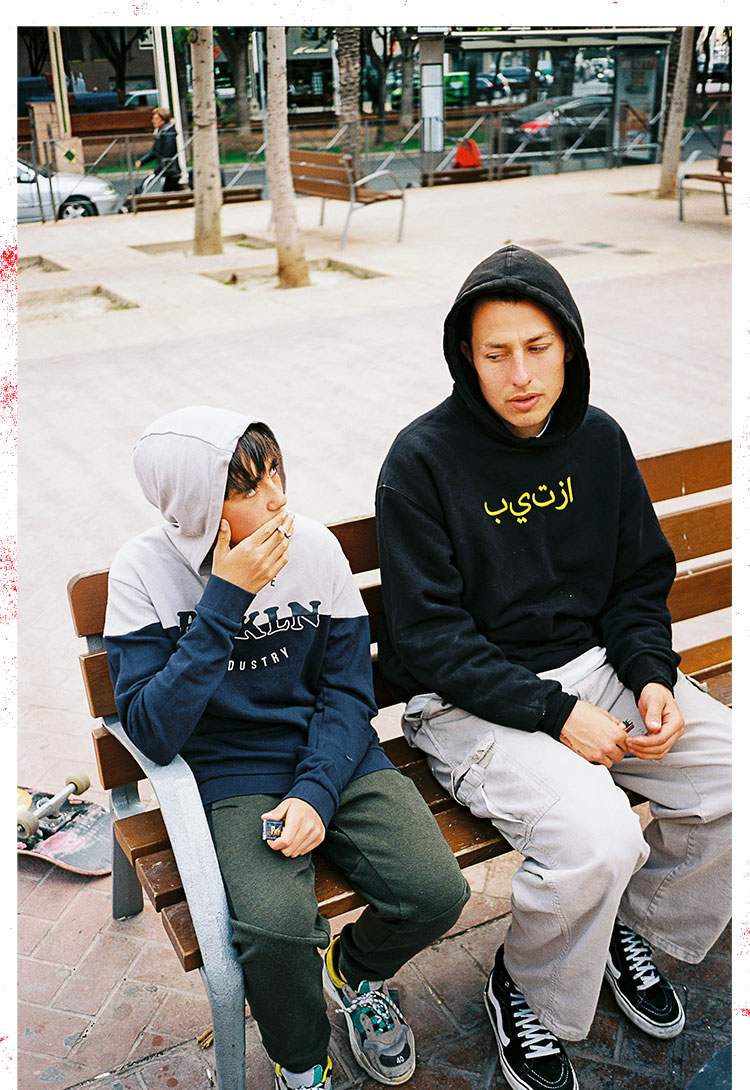 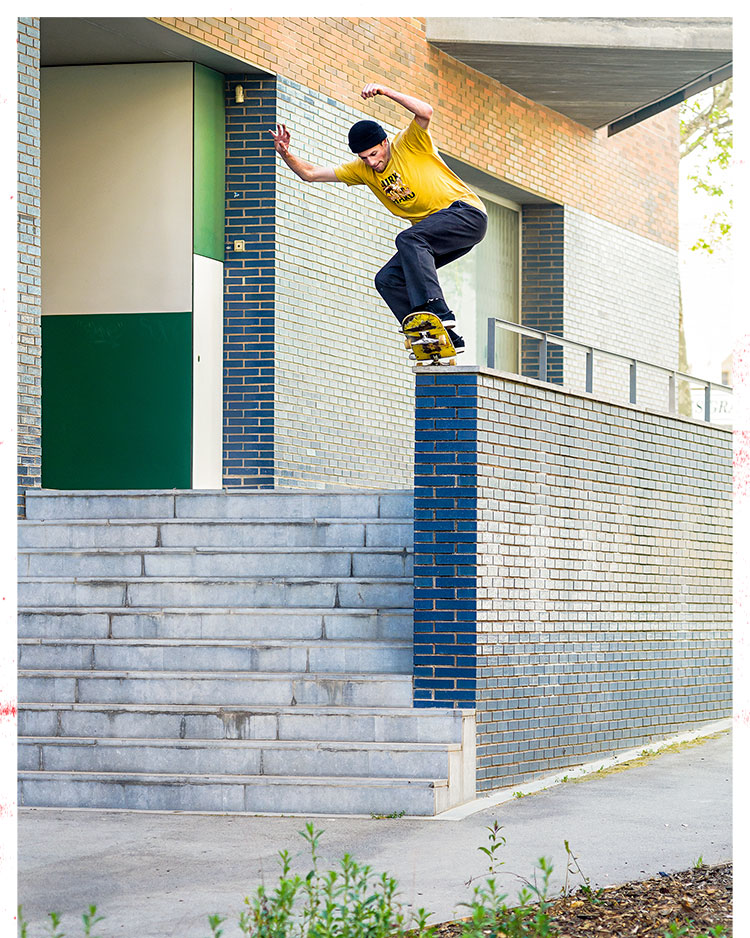 It’s easy to forget that the tech wizard can jump down shit too. Mike Pulizzi pinched this backside 5-0 and took the drop as casually as popping off a flatbar     Photo: Riera

When Ducky is really putting it down, he’s getting wrecked on the daily. There’s an ongoing joke that he’s been getting soft lately, but he skated through this entire trip with a shinner from hell, putting a rest to that rumor. He was fucking around on a rail he had no business skating and split his leg open. The skin was so raw that it was constantly oozing for the remainder of the trip. He had to do daily maintenance, cleaning and bandaging the wound so it wouldn’t get infected. Make no mistake—the Duck is definitely still hard! Chase fucked himself up pretty good, too, one day. He took a warm-up backside grind on a kinked rail straight to the face with a scorpion dismount. Luckily there was a hospital across the street. Five hours and eight stitches inside of his mouth later, he was good to go. Who needs booze when you got the streets to fuck you up? 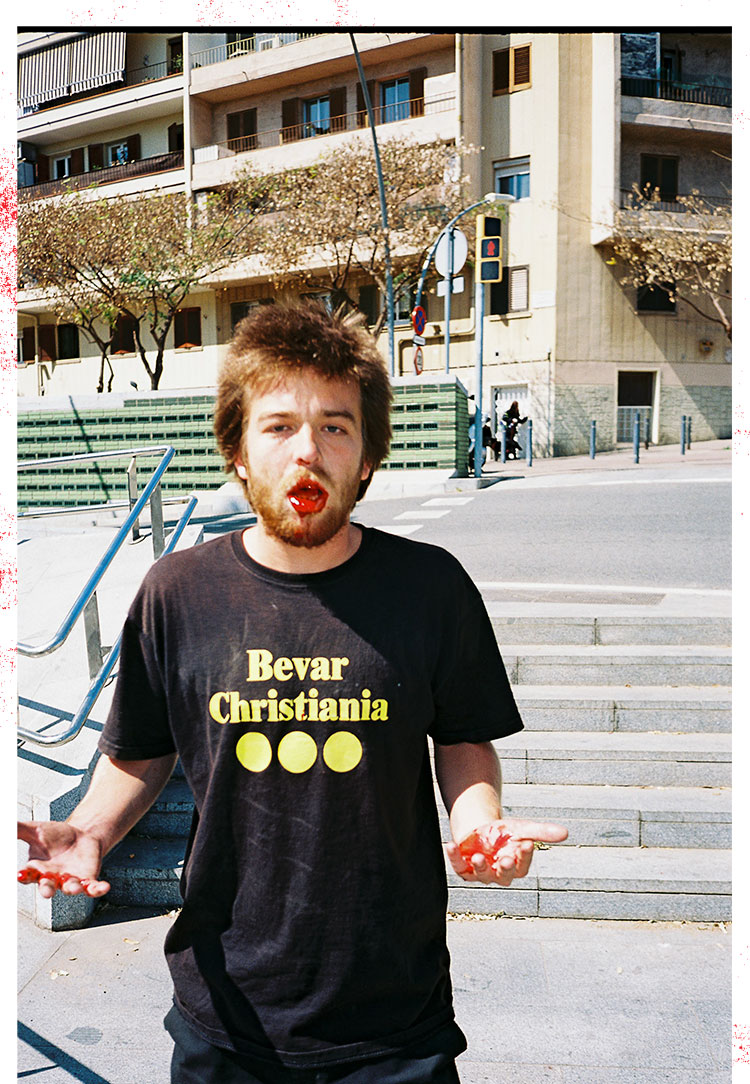 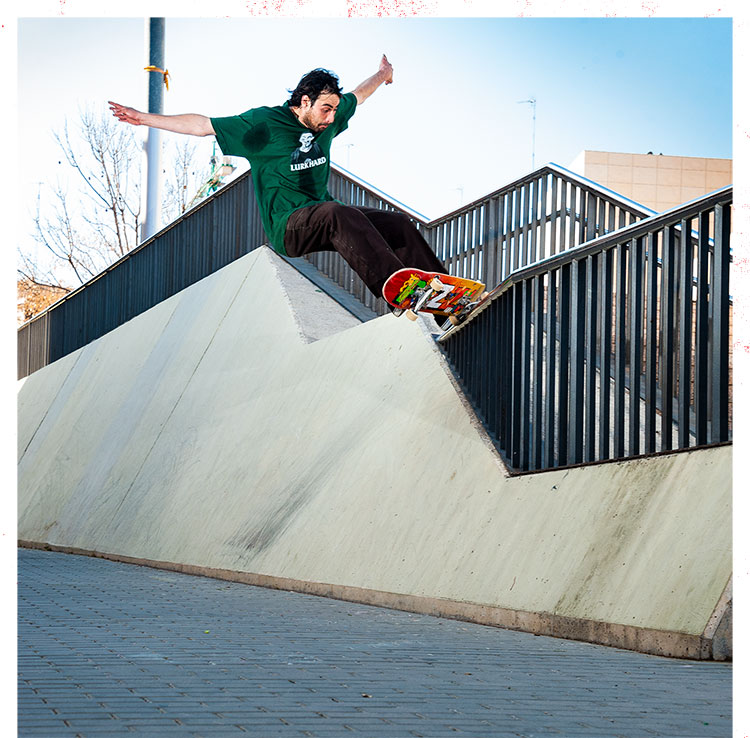 We all saw a wallride but Adam Taylor eyed the grind and took this 5-0 back into the bank. Joogy Mack delivers the goods     Photo: Duval 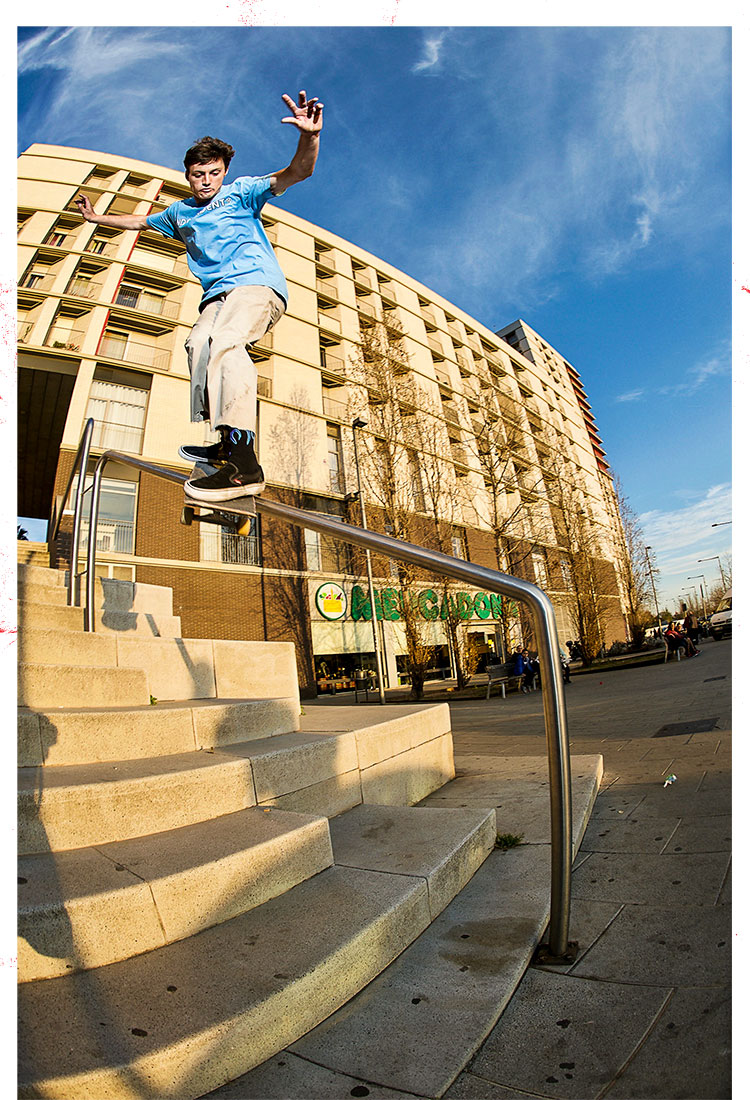 This back Smith only took a few tries but it felt like an hour because of Ducky’s pigeon obsession—he’d patiently wait for one to walk into the roll up or landing before he’d throw down, hoping it would be in the photo or footage. Birds of a feather…     Photo: Duval 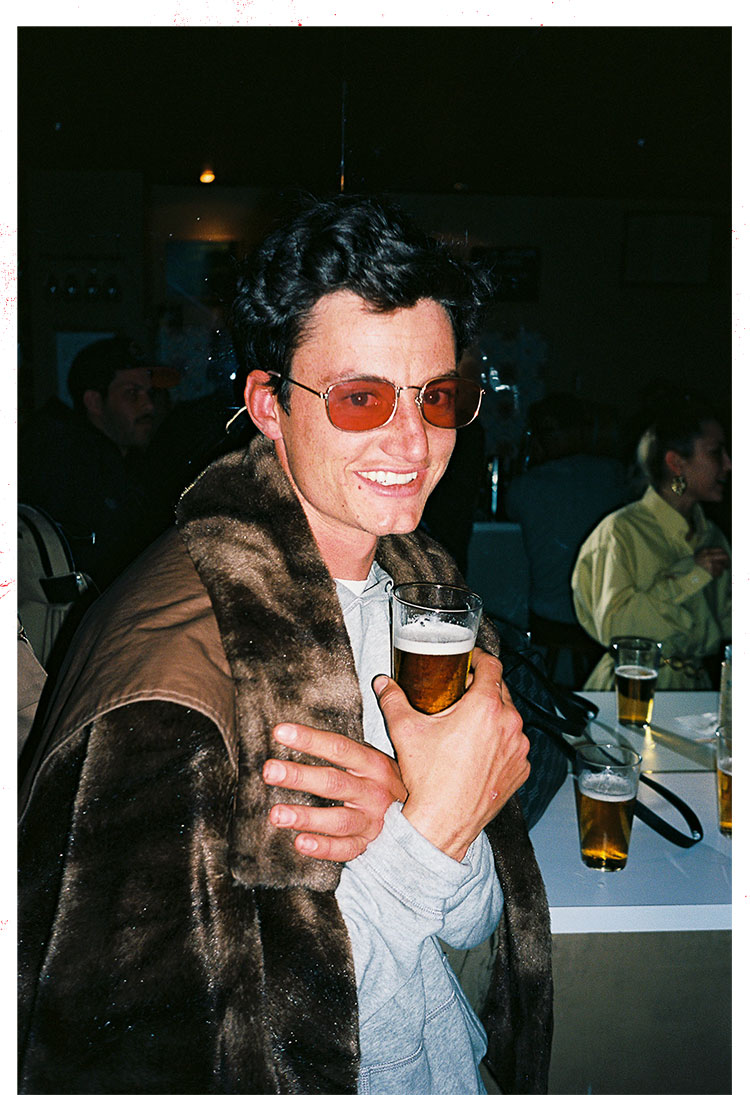 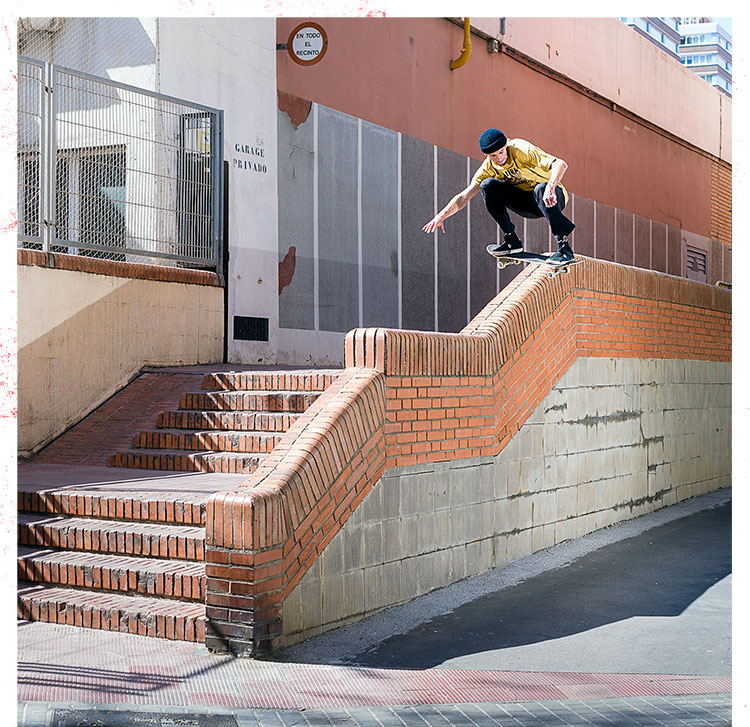 A lot of wallies are low impact but this one was bone-jarring. Pulizzi smashes over the hubba on another danger drop mission    Photo: Riera

Ducky managed to lose his phone at a gas station. Whoever found it is no doubt enjoying all of his illicit Tinder messages. Adam Taylor somehow cracked the screen of his phone while it was in his pocket. I almost made it to the end of the trip without joining the club but dropped my phone on the last day and shattered my screen, too. Guess we shoulda signed up for that AppleCare coverage after all. And not to be left out, Chase got his phone pickpocketed while he was cutting a rug on the dance floor at the Estrella Damm brewery one night. Maybe Wes Kremer is onto something with that flip phone of his. 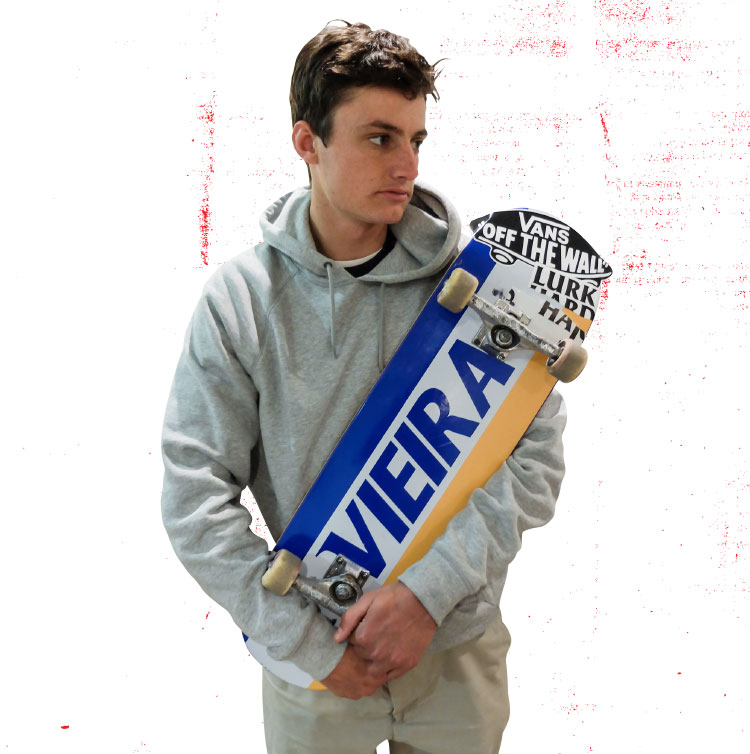 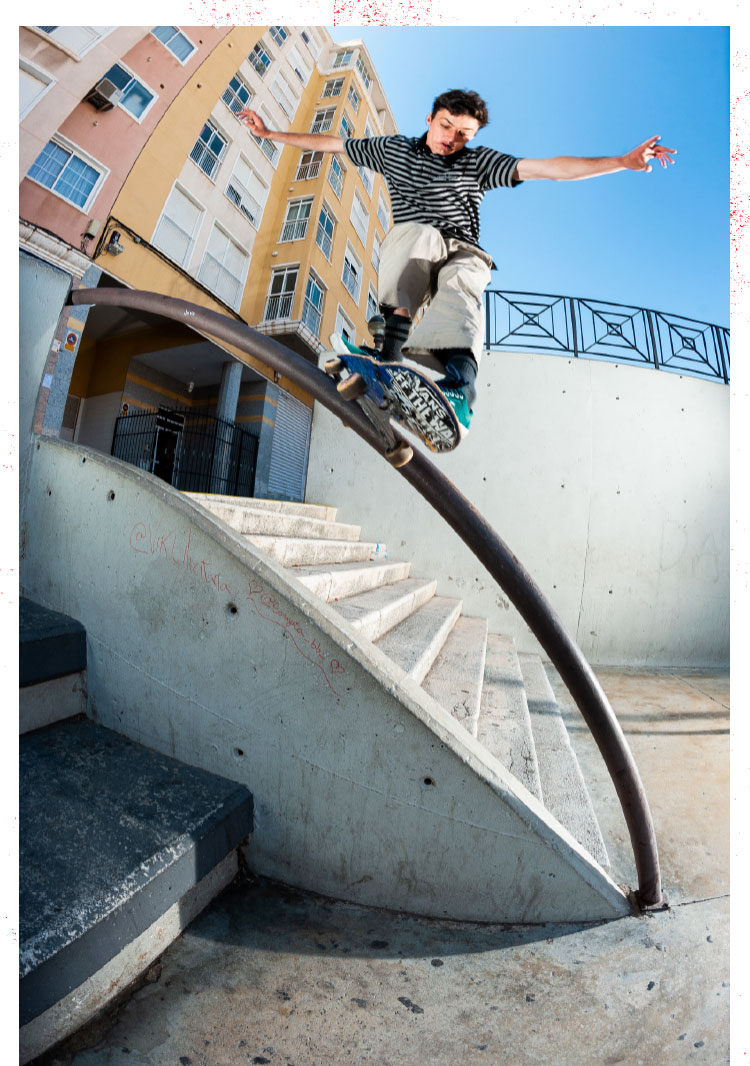 Ducky held this front feeble all the way to the ground. It made no sense whatsoever, but when a six-pack is on the line sometimes reality gets bent     Photo: Duval

Watching Pulizzi skate these drop-down ledges was like watching somebody unlock secret codes in a video game—tailslide to nosegrind 180 yank out. Hold L1 and press Circle, Right, Up, Down, Circle, Right, Up…     Seq: Duval 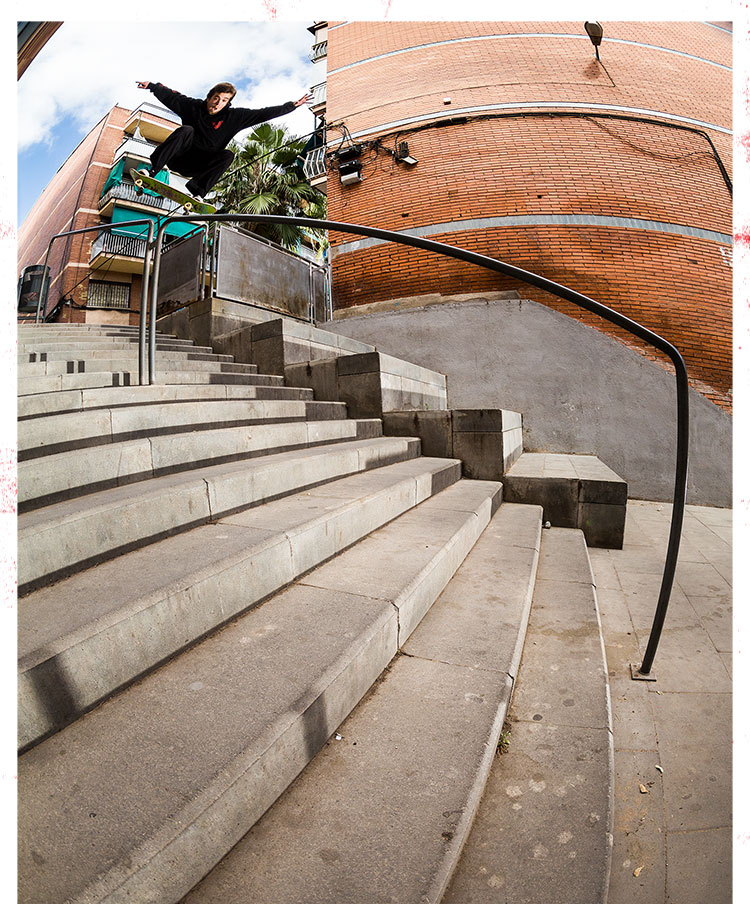 You can steal Chase’s phone but good luck copping his moves. Full-send gap to lip for the mayonnaise-haters club     Photo: Durso

One late night in Alicante, Ryan “Bonnors” Connors, being the genius that he is, took a shower and then threw his wet towel over a light in the bathroom. We all went to bed and woke up coughing. We found his towel on fire, filling the house with toxic fumes. The fire was immediately put out and our lives were spared. Everyone suffered some minor smoke-inhalation damage but that shit could have been WAY worse. Thanks for almost killing us, Bonnors! 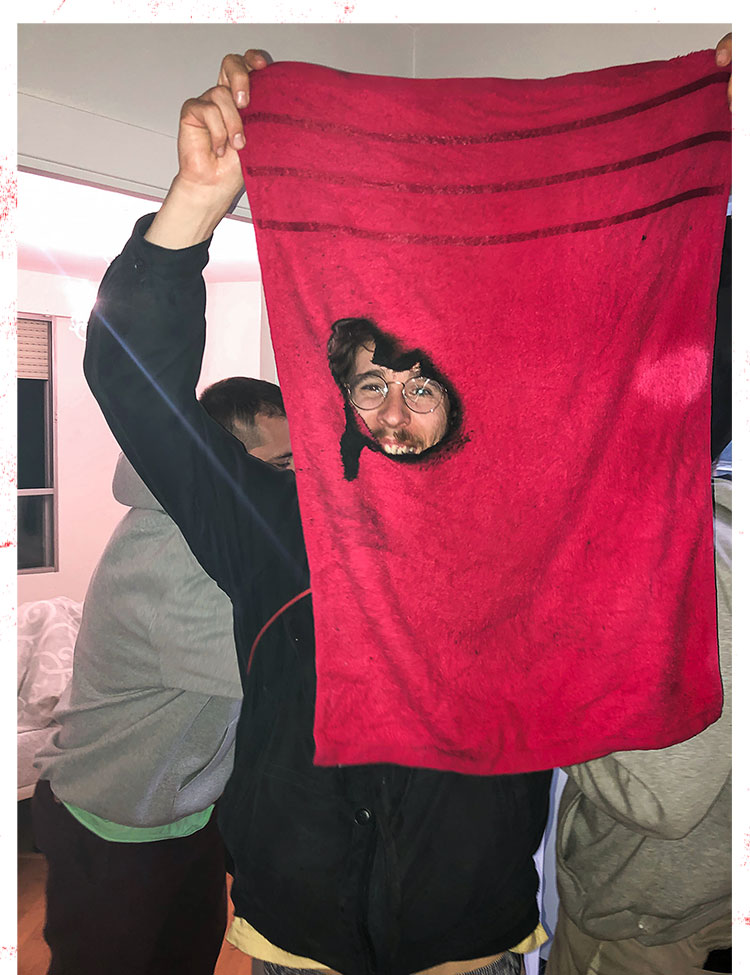 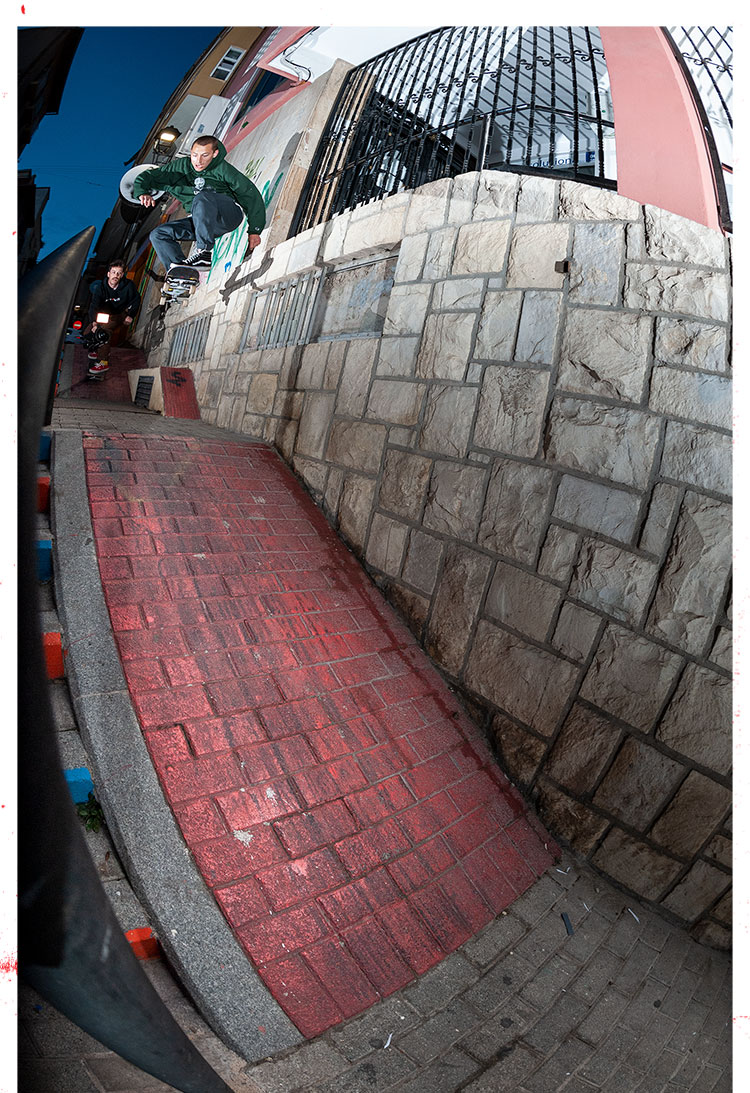 This spot was directly across the street from our Airbnb in Alicante. Bonnors threw his bags in the flat and got to work. Ride-on grind, ollie into the bank with Ref hot on his tail     Photos: Duval 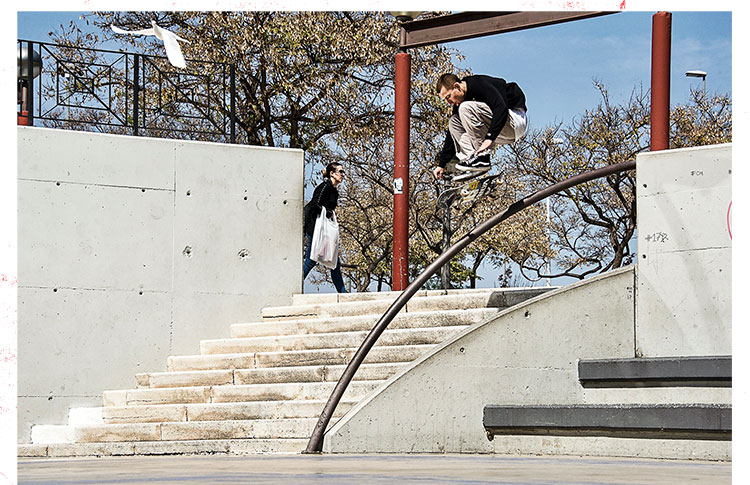 The Duck prays for pigeons but Bonnors summoned a seagull—flyin’ high with a varial heel over the rainbow     Photo: Duval

In addition to the bathroom, Ryan Connors set the spots on fire too—tailslide kickflip out, smokin’!     Seq: Duval 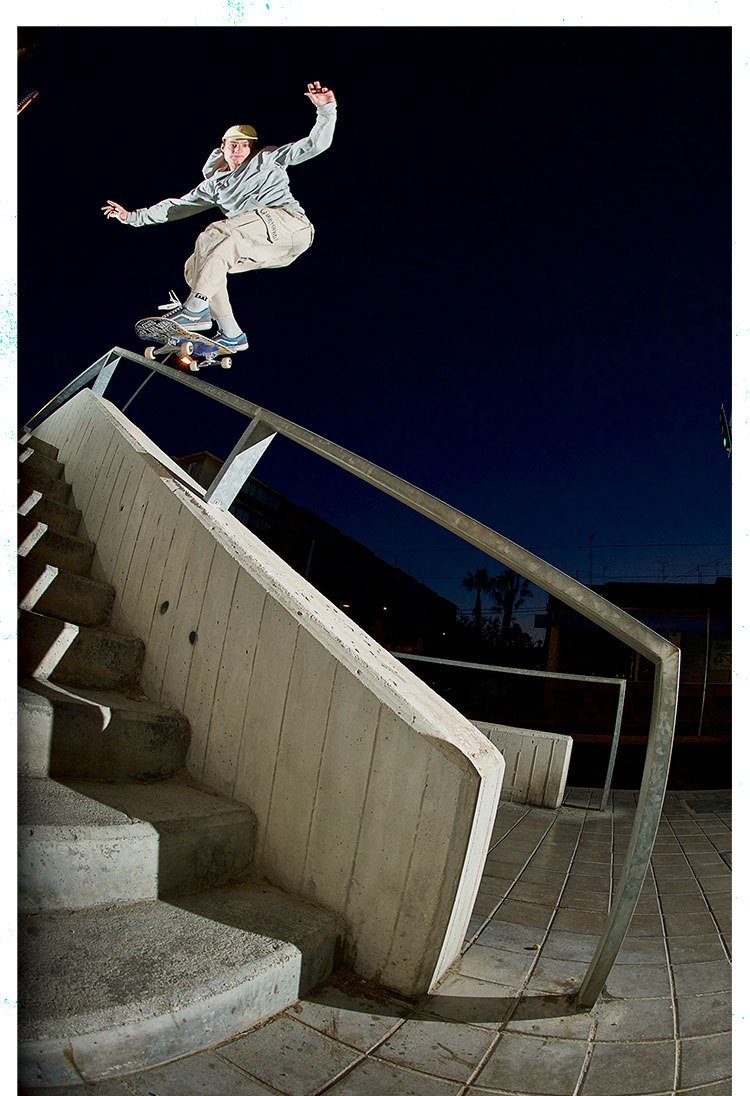 This rail is in a sketchy neighborhood in Alicante and we could sense the locals scoping our camera gear. Ducky warmed up with a 5-0 and then quickly dropped the back lip—two and through, thank you     Photo: Duval

The next day we headed back to Barcelona and as we pulled up to our Airbnb the owner was out in front. Two rental vans full of skaters poured out—way more than the agreed-upon tenants who were supposed to be staying at his property. He was definitely not feeling it. He followed us in, questioned us and then proceeded to lock two of the bedroom doors. We went from eight beds to four in a few seconds. All of the single guys immediately started swiping right on Tinder, hoping to find a welcoming bed for the night. Any safe port in a storm. 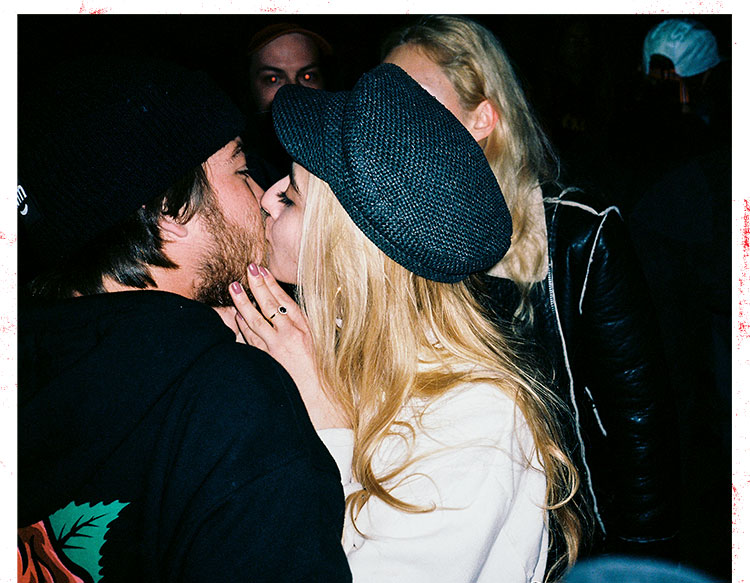 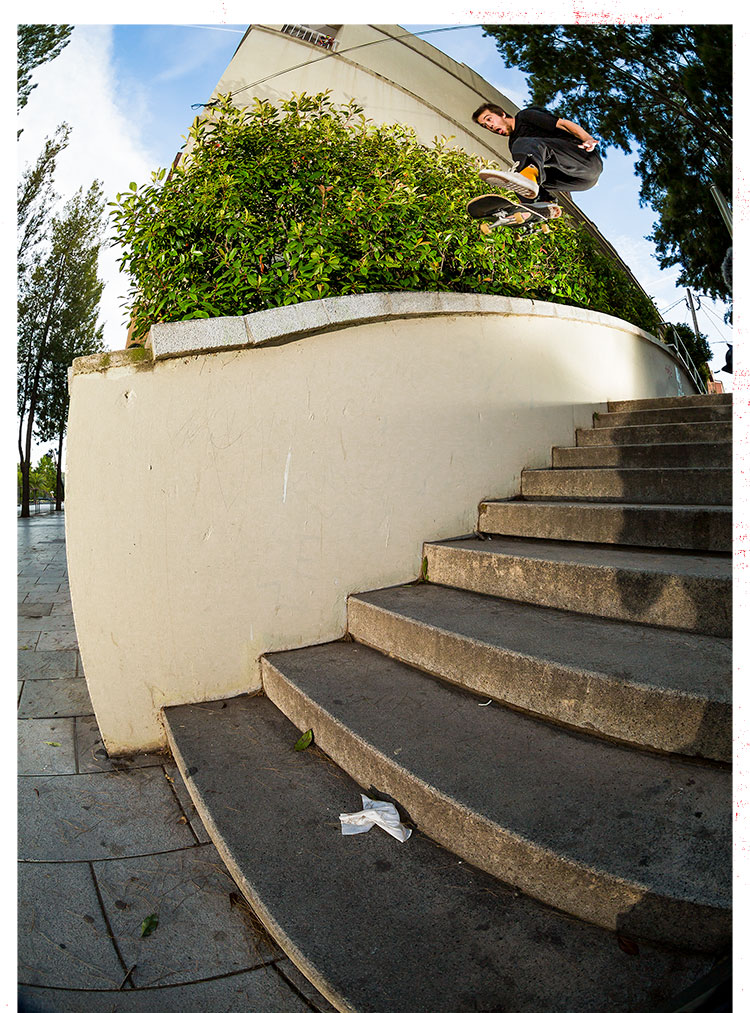 Look at that face! You can just feel the stoke! Chase kickflip 50-50s, avoiding any unnecessary pain (except the pain of his skate face). Sorry, Chase!     Photo: Durso

Bonnors woke up one morning after a Tinder date at the club with his debit card nowhere to be found. All his cash was gone, too. Bummer, B. Ducky lost all kinds of shit along the way. We went into a supermarket to get drinks, then came out and skated down the street. I looked back to see him chasing us on foot. He thought we’d grabbed his board as a joke, but for once nobody was pranking him. He ran back to the store to find his board had definitely been stolen. Zach’s a good sport, though, so he ran from spot to spot with us the rest of the day (no doubt feeling like a cabrón). Luckily, Ducky gets boards for free, so it didn’t take long to get another setup under his webbed feet. 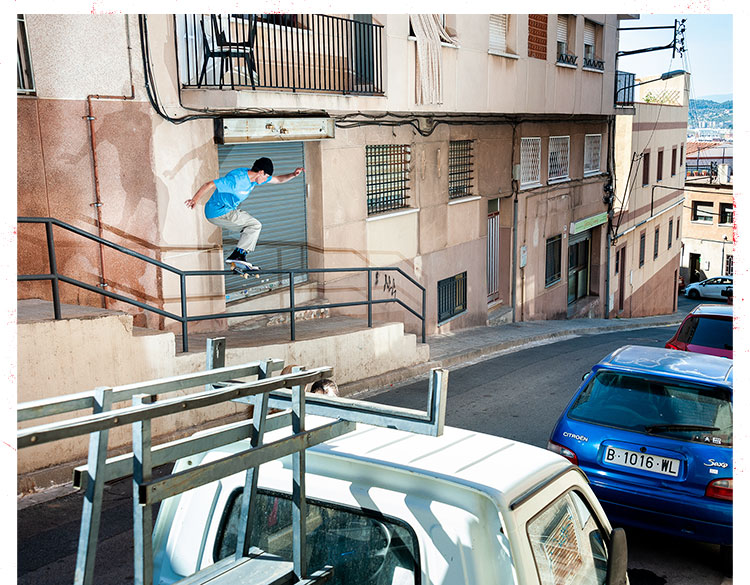 Ten Euros were on the line if Ducky could land this Smith in ten minutes or less. It took him 14 but we bought him a street beer as a consolation prize. It ain’t all bad     Photo: Duval 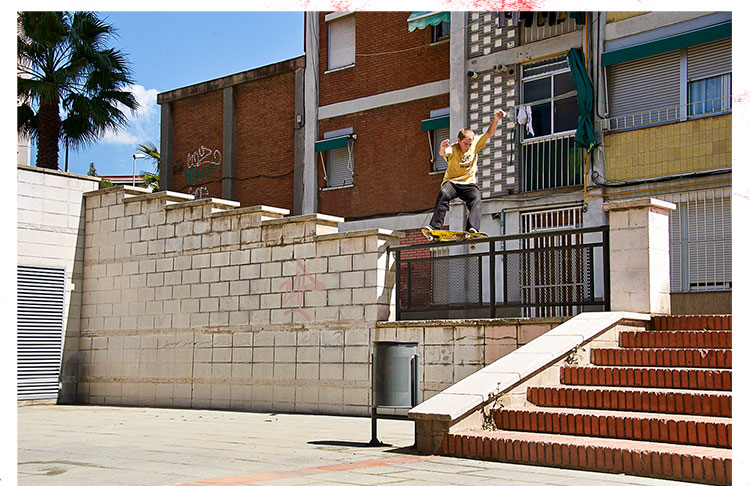 Six drops and a grind, Mike P handled this head scratcher with ease. I guess anything is a skate spot now 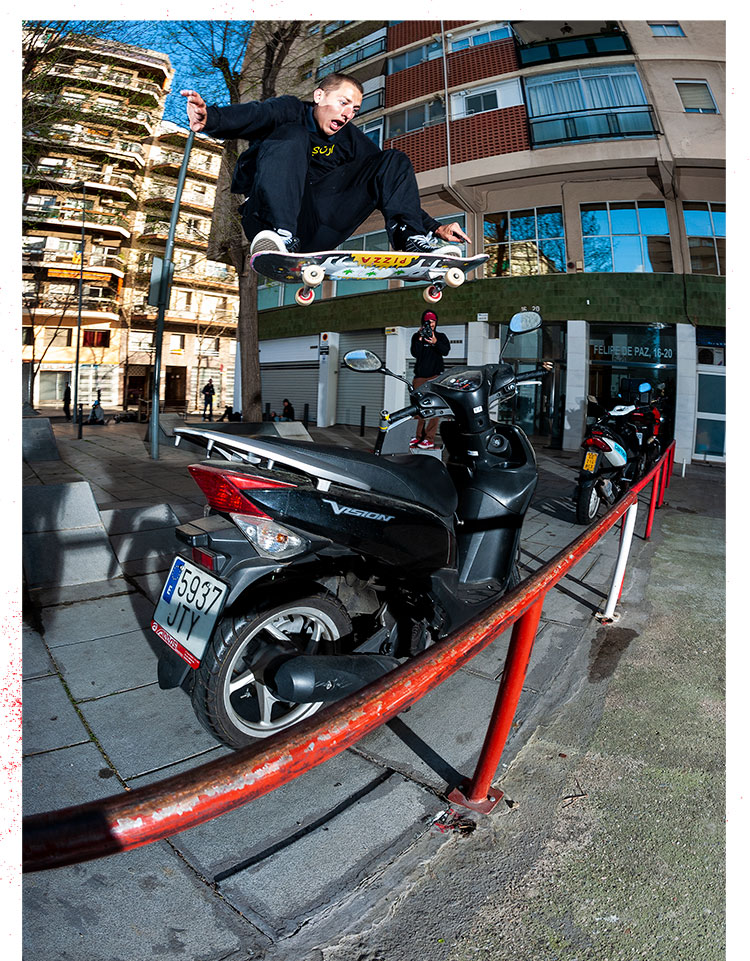 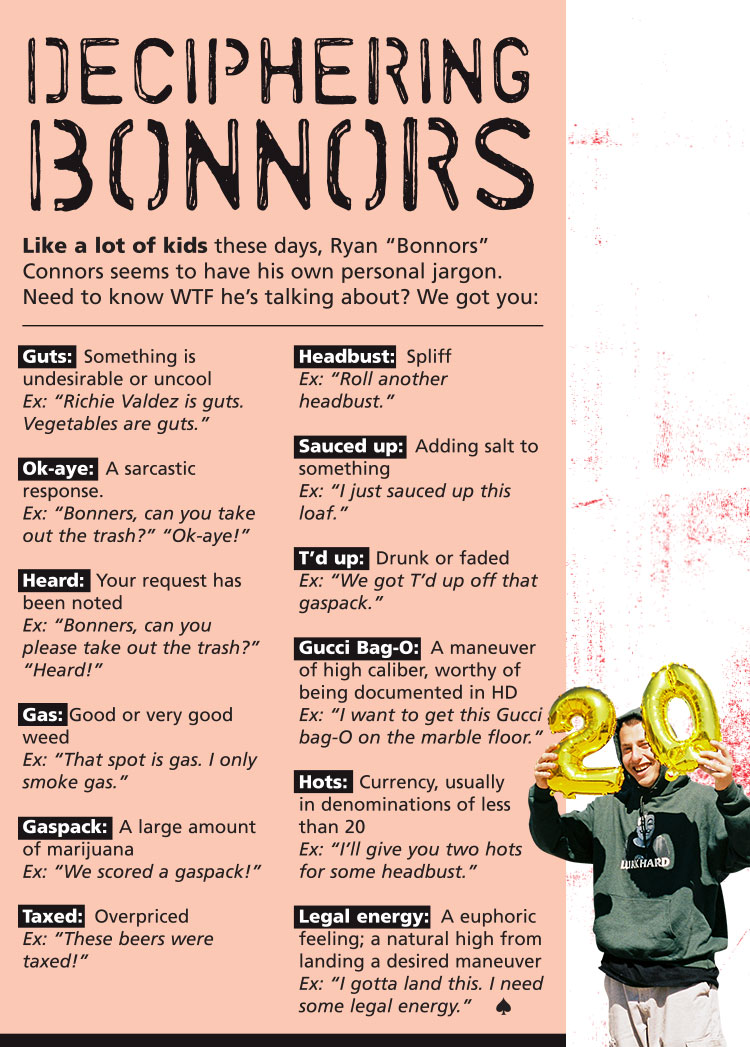 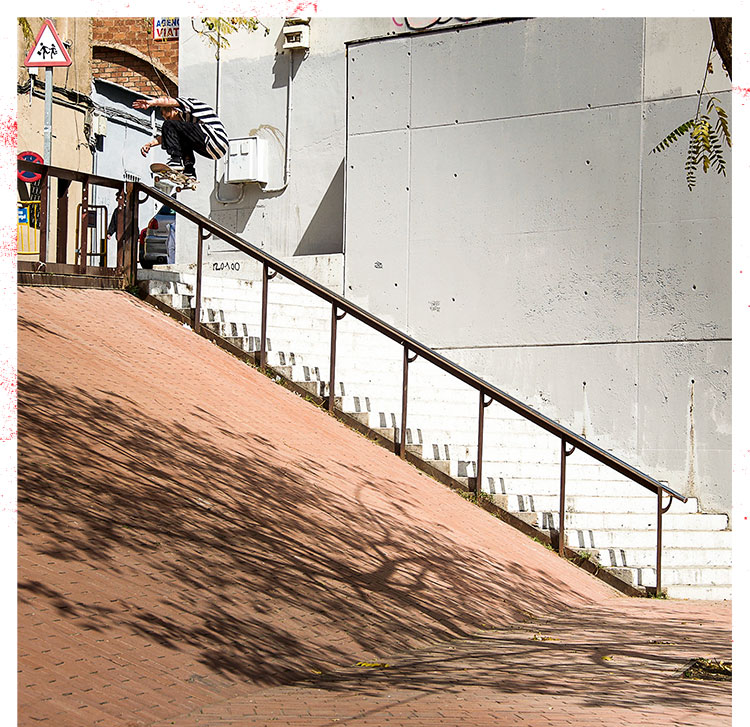 He was pretty dusted from his first trip to Europe, but Bonnors scored some legal energy with this backside 180 on the last day of filming. Gucci Bag-O!     Photo: Duval 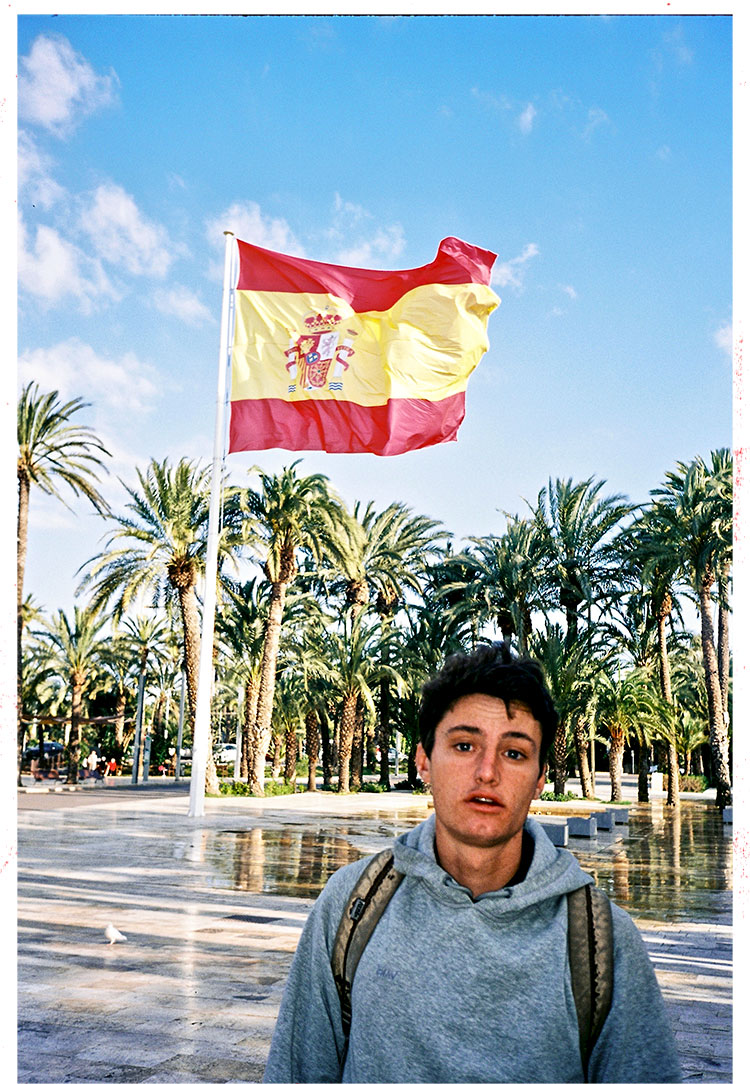 One alcohol-fueled night at Jamboree, in addition to getting shot down by numerous local girls who couldn’t understand his broken Spanish, Ducky managed to lose a set of our Airbnb keys. He stumbled back to the house, hit the buzzer and woke us up at 4 AM. Admitting to your TM that you lost the keys to the house while on a bender trying to get laid is not the best look. Good thing he redeemed himself the next day the streets. All is forgiven, young Duck. 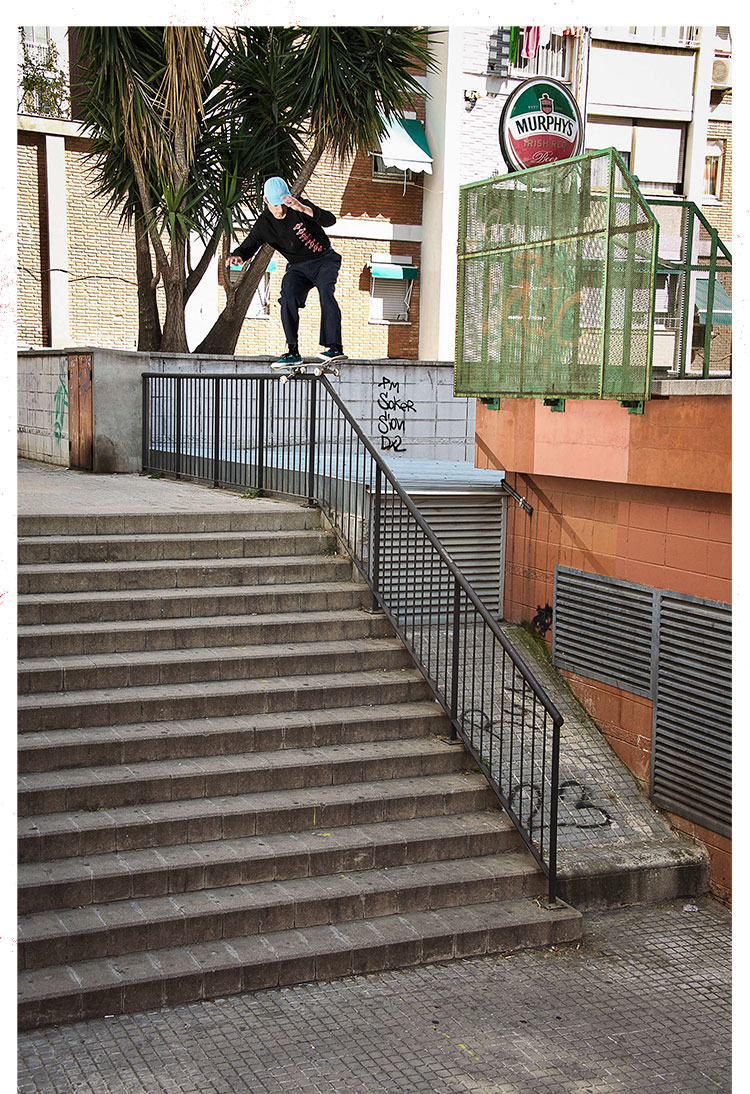 Three of us snuck into this courtyard while the rest of the crew watched our gear. With a ten-minute timer ticking, Ducky landed this roll-on grind (twice) just as a lady in an apartment above yelled that she was calling the policía     Photo: Duval 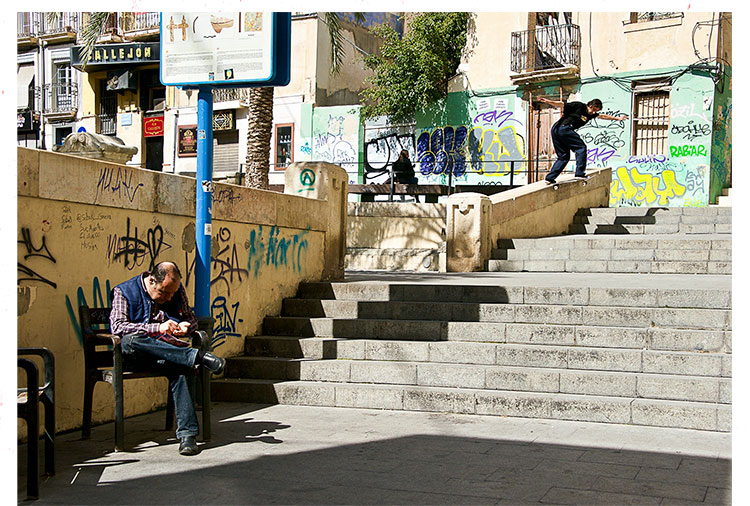 As a local twists one up at the bottom, Joogy sends this backtail to the end. Then he twisted one up of his own to celebrate     Photo: Duval

Despite the blood, stitches, smoke, stolen goods, lost shit, damaged phones, heartbreaks and hangovers, this Spanish mission was still productive. And you can’t appreciate the good times without living through some bad ones, so despite all the pain in Spain we can’t wait to come back. We might pack our own smoke detectors next time, though. Jesus, Bonnors… 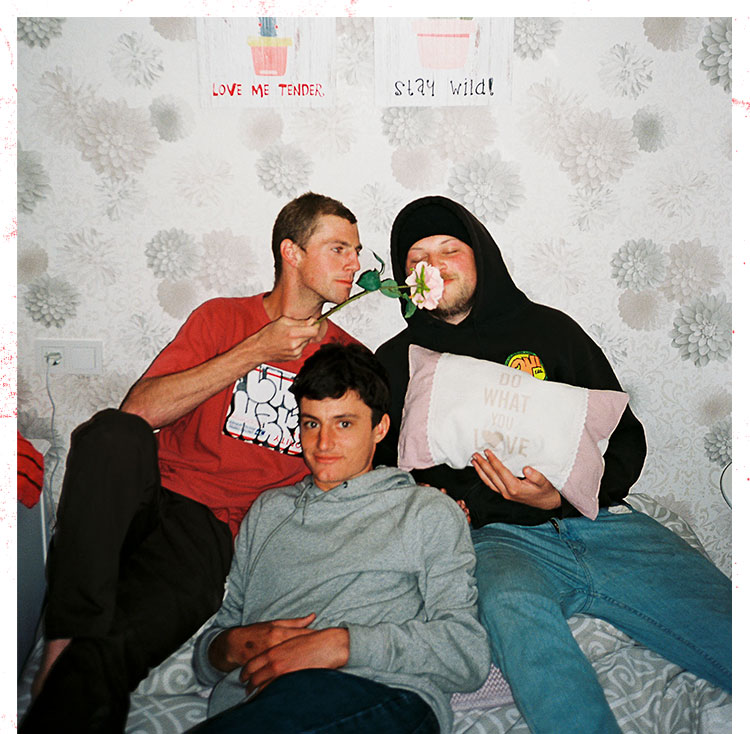 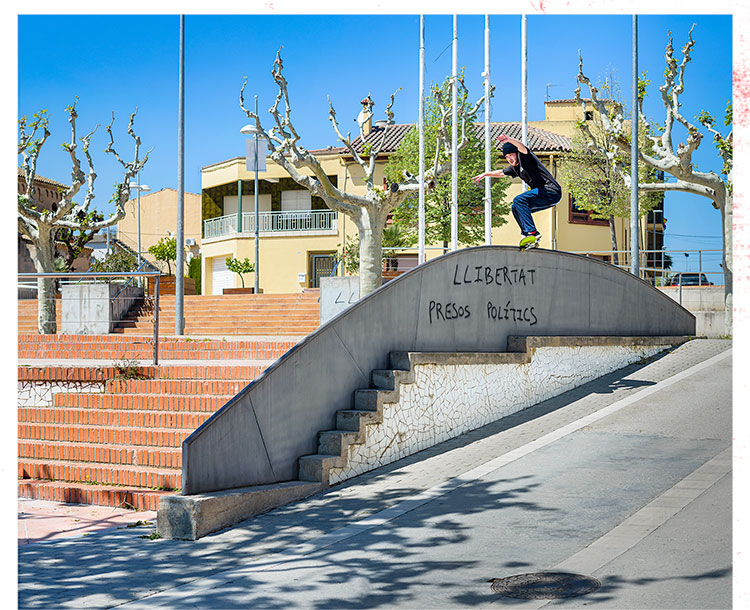 The writing may be on the walls but the grinding is on the rails. Chase, rainbow-chasing Smith with a high-sack factor. Glad you guys made it out alive!     Photo: Riera