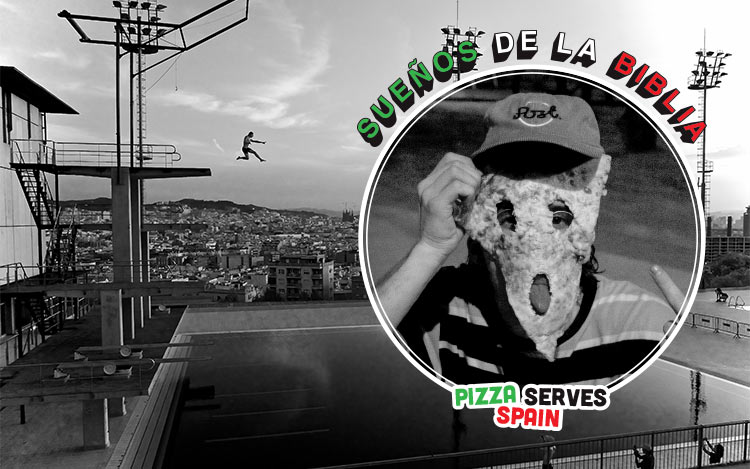 Emerging and thriving as a small board company is no easy task: from earning the respect of the industry bigwigs to maintaining board sales in order to keep afloat, it has its fair share of challenges. Somehow Pizza skateboards managed to sell enough decks to barge their second trip to Spain, proving that they must be doing something right. There’s no big-name pros on the team—no Street League contenders. However, the guys are young and scrappy, constantly pushing themselves to get a little shine and make a name for themselves. As we boarded this flight we were told that nothing was guaranteed: come home with a bunch of mediocre moves and this whole thing’s going straight to the ‘net. Come back with the goods and we had a shot of making it into the Bible. With that in mind, we collectively said our prayers and said adiós to America. 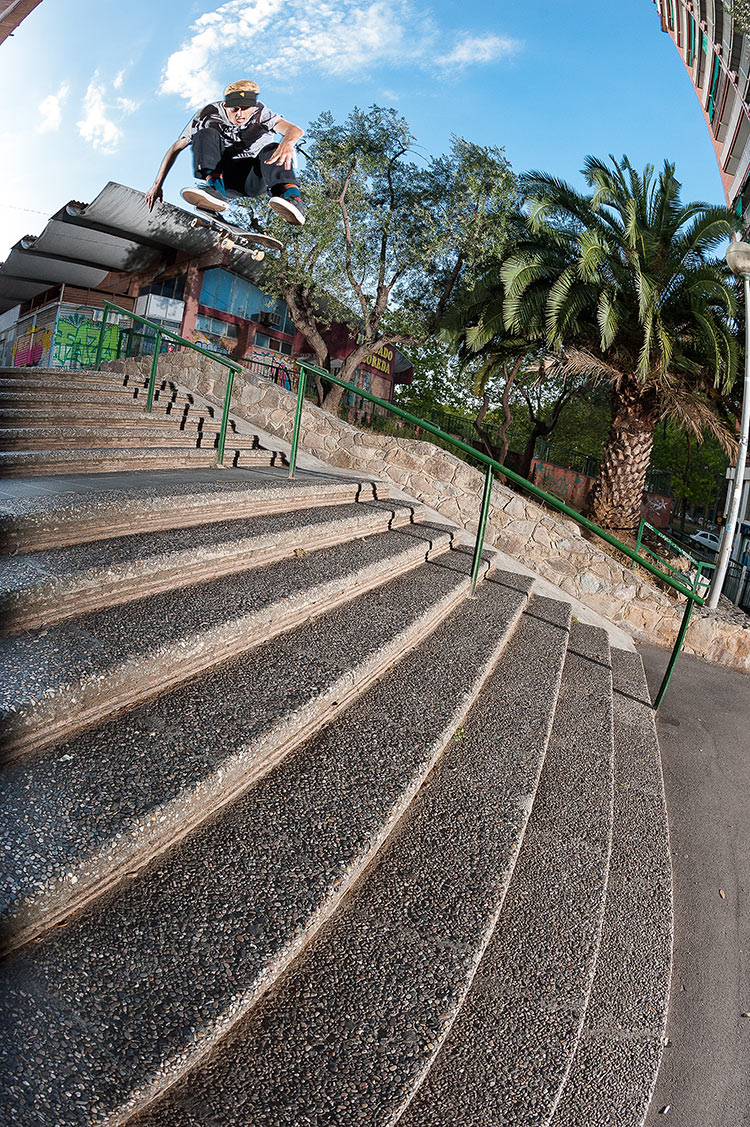 While navigating the green line back home we came across this double set. We were satisfied with the ollie but Ducky insisted he could kickflip it. He wasn’t lying

We spent the first week in Barcelona hitting up spots on the outskirts of skate paradise and getting acclimated to the slow-paced Spanish lifestyle. Although the Barca spots are never ending, so are the tourists in the summertime. Dodging the oblivious, sunburnt sightseers grew tiresome so we weighed our options for other cities to check out. We heard that during the month of August the majority of businesses in Madrid close, offering a window of opportunity to skate spots that are normally a bust. We thought it was worth checking out, so we rounded up some BCN Pizza affiliates to show us the ropes and headed west. 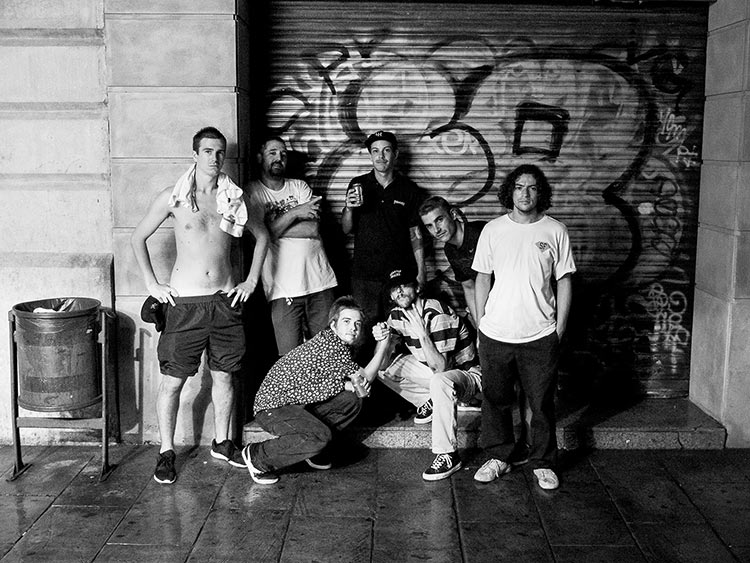 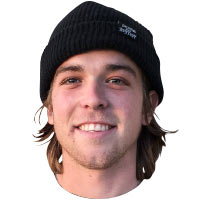 You’re the new guy on the team. What’s your take on the brand?
I’m stoked as fuck! It’s small, simple and everyone is like family. What more could you ask for?

How much international traveling experience do you have?
I would say I have been out of the country eight or nine times. Which is insane to think about considering four years ago was my first time leaving the country.

Barcelona or Madrid?
Barcelona! You have the beach and the metro system is all time!

You have been to Spain before with the privilege of a van. Which is easier getting around, hustling Metro lines all day or having wheels?
I would go with being on the metro. You can get way more done, I feel like, because Barcelona is a busy city: finding parking and dealing with traffic is too much. With Metro you just hop on and off and you always get to be rolling on your board.

What food did you survive off in Spain?
Pizza diet! I probably ate three or four slices a day to keep my stomach happy.

A lot of nights turned into mornings, what is the wildest shit you witnessed?
BJ alley!

Favorite trick of the trip?
Watching Ducky fucking fly down that huge double set! Kickflip to back foot dangle? Shit was absolutely insane! 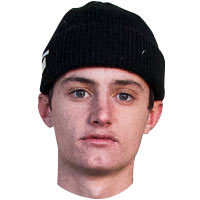 Was this your first trip to Spain?
I went to Spain with my dad and my grandmother when I was 17. I skated a little and went to a lot of museums. This trip was a little different than that one—

What did you think of Madrid?
The spots were so good and nobody was around during the day. La Latina celebrations were going on and we shared many a Botifarra and Mahous. Good times.

Tell me about the Cathedral kinker?
That was hectic, especially since Ref [Pizza filmer] almost broke his neck near the rail earlier on the trip. We skated the cathedral when it was open. It was a pretty big tourist attraction and there was a crowd of people watching. The police drove buy a few times, but they couldn’t really see what was going on because of the crowd. I took a few good slams but when a Desperado was put on the line for the make, I rolled away from it.

Did you read your girlfriend’s letter every night before bed?
Only one time. I probably would have read it more, but I left it on the table the first night and Ref read it and then I couldn’t find it. He probably still has it. My bad, Marisa.

What was it like growing up with Jesse and then sharing a room with him in Spain?
It was pretty crazy. It was rad sharing an experience like Spain with someone else who grew up skating in the Central Valley. Halfway through the trip he dropped his phone in the toilet so I let him borrow mine to FaceTime his chick. 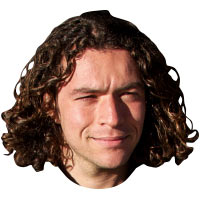 How did you get on Pizza?
My friend Geno gave me a board one day and said, “Go film some shit.”

This was your third trip to Spain. What did you learn this time?
How to take the trains for free. Ha!

Were you the chef of the trip?
I’m so broke, I cooked at the apartment almost every day. Which meant I ended up cooking for everyone, except Chase. He only eats quesadillas and pizza.

What happened to your phone on the trip?
First week in, I dropped it in the toilet at Stereo bar. Cabron.

Highlights from the trip?
Skating Madrid for the first time and La Paloma.

Any difficulties skating in Barcelona?
Almost every spot is so perfect and has been crushed so I am always looking for weird shit to skate. 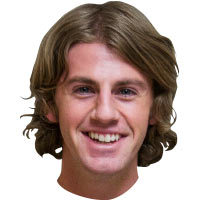 How did you get hooked up with Pizza?
It was over two years ago when I first started getting boards. I had been on Lurk Hard for a little while and eventually asked Geno about Pizza.

Do you have any international travel experience?
Yeah, I’ve been traveling a lot this year which has been so rad! It’s crazy because last year I had never really even left California.

How did you get hurt on this trip and how did you cope?
Just warming up in the morning and rolled my ankle. I didn’t think much of it at first. It felt like something small that I’d get over in a week. It got worse and not skating and trying to get around was shitty, but Xibecas and the beach are not so bad.

What did you miss out on most while being injured?
I missed out on so much. It was the worst being there and not being able to skate. It was hard to keep up on crutches with anyone unless we went somewhere close.

How was it cramming 8 dudes in a one bedroom apartment in Madrid?
It was pretty sick having everyone in that apartment, especially having Dani and Raul with us. Sleeping zones were a little tight but it was still fun!

So you’re healthy again. What’s on the agenda for you and Pizza in 2017?
Skate every day and do better than the last. 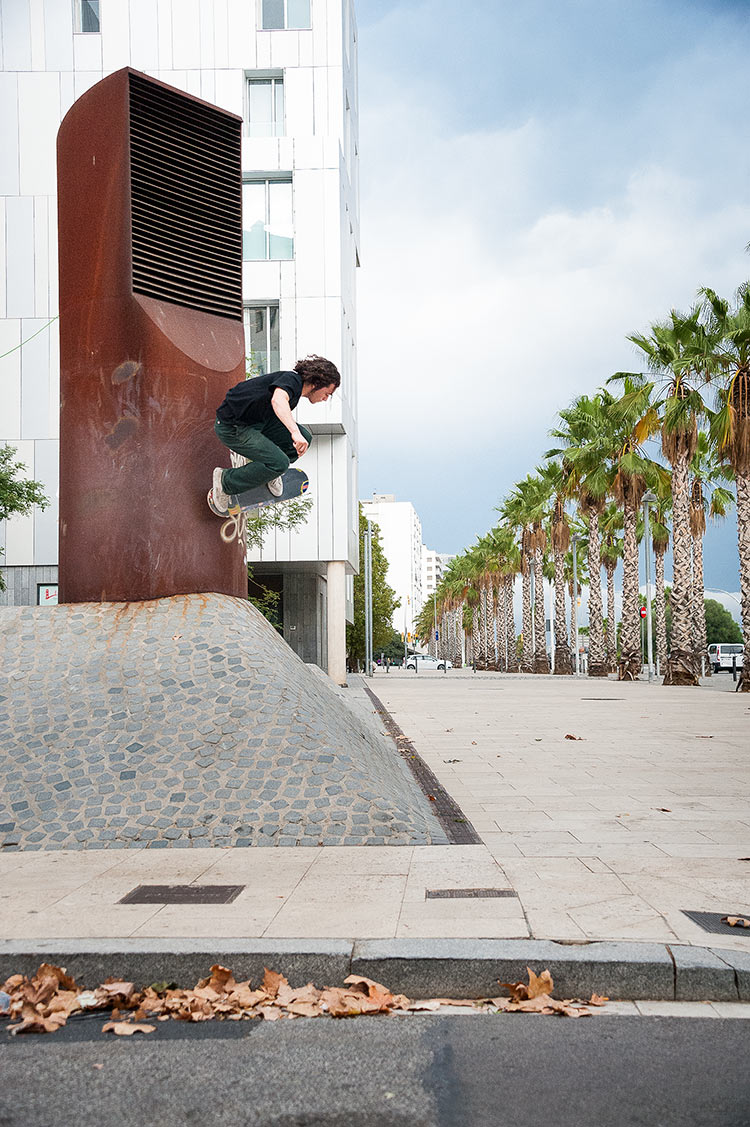 Getting lost in Barca is half the fun. There are spots around every corner, new or old. Jesse Vieira signed the lease at his new beachfront flat. Wallie over the hip 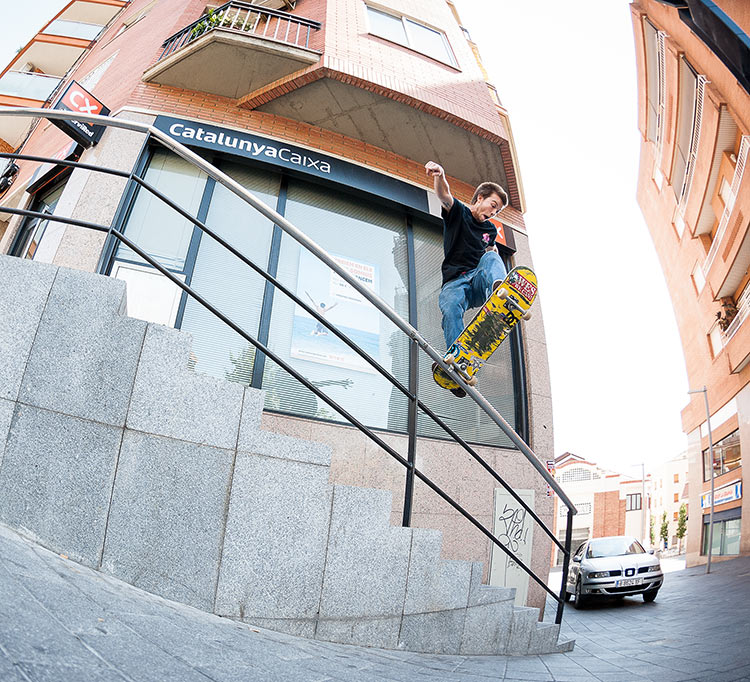 You would think Sunday during siesta would be a go at the Caixa. Fifteen minutes in and the neighboring business owner was watering down the runway and calling the cops. Chase handled this front blunt as quickly as any of his Spanish Tinder dates

In Madrid we crammed eight guys into a one-bedroom apartment. You learn a lot about your friends in a short period of time in such cramped quarters: who takes regular showers vs. who does not, who steals leftovers out of the fridge, who cleans up, who’s a slob. Tight sleeping arrangements like this inevitably create issues. We all had the choice of being a part of the problem or part of the solution. Some things you take away from an experience like this:

• If you’re about to sit down to a 45-minute numero dos in the bathroom, check with the crew to see if anybody needs to take a piss first.
• If you cook for the whole gang, somebody else is doing the damn cleaning.
• Ear plugs are a necessity to sleep through snoring and Snapchats.
• Power strips are crucial in order to keep everybody’s social-media devices charged up.
• If you run to the store to buy a beer, you better bring back eight.
• Toothbrushes and towels are never to be shared. Don’t even ask.
• Eight skaters can trash an Airbnb in about two hours. However, they can clean it in about the same amount of time if there’s no bitching about it.

Michael Pulizzi is no rookie to the Spanish life. He was on a roll until a fractured foot rudely interrupted his stay. Backtail to nose slide 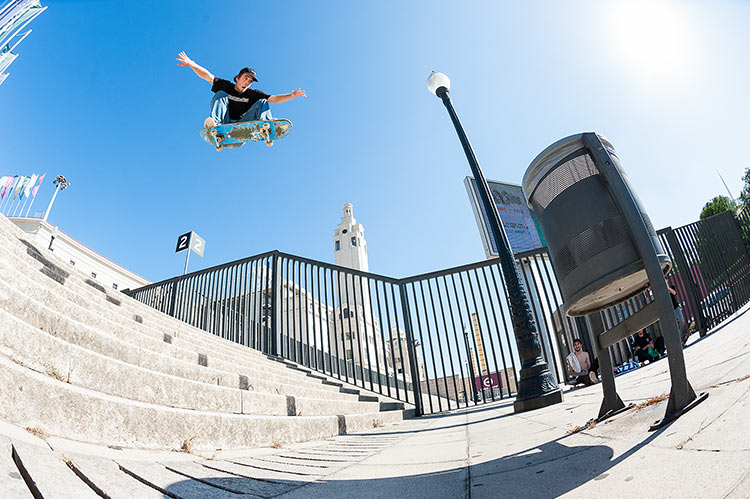 The Olympic stadium in Barcelona is like a martian landing pad. Chase ollied through dimensions to get over this trash can

We made it back to Barca for the tail end of the trip. After fully indulging in the leisurely Spanish lifestyle, nobody was in a rush to return to normal life back in the States. Nevertheless, one by one our crew got smaller, legs got sorer and hard drives reached their capacity. We did our best to cover as much remaining ground before saying “Hasta lluegos!” to our Spanish compadres. If you’re reading this, it means the dudes came through and we managed to slide a little bit of pizza into the Bible. Thanks for giving us a shot either way. Hope we didn’t blow it!

On the flight out, Chase Webb said he really wanted to go to Madrid, solely for this hubba. After landing a kickflip 50-50 and a kickflip 5-0, he nailed the 360 flip 50-50. Definitely worth the airfare 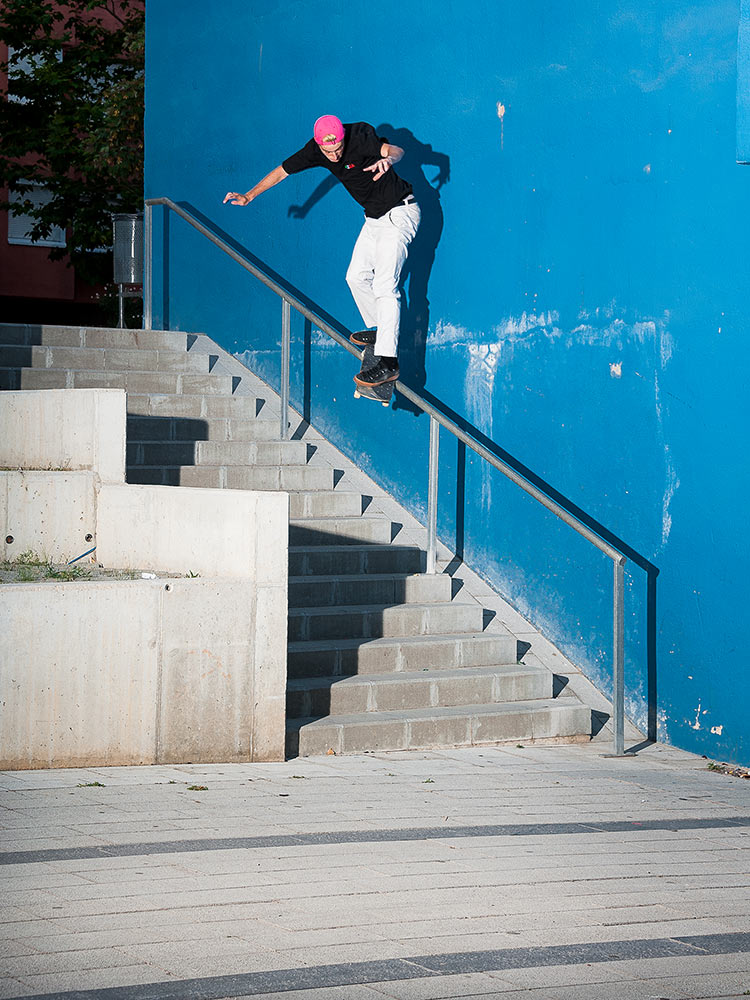 The locals at this remote spot are quick to zone in on a crew of traveling ‘boarders. Ducky Kovacs managed to back Smith this rail twice and then snuck away before being asked to sign any autographs