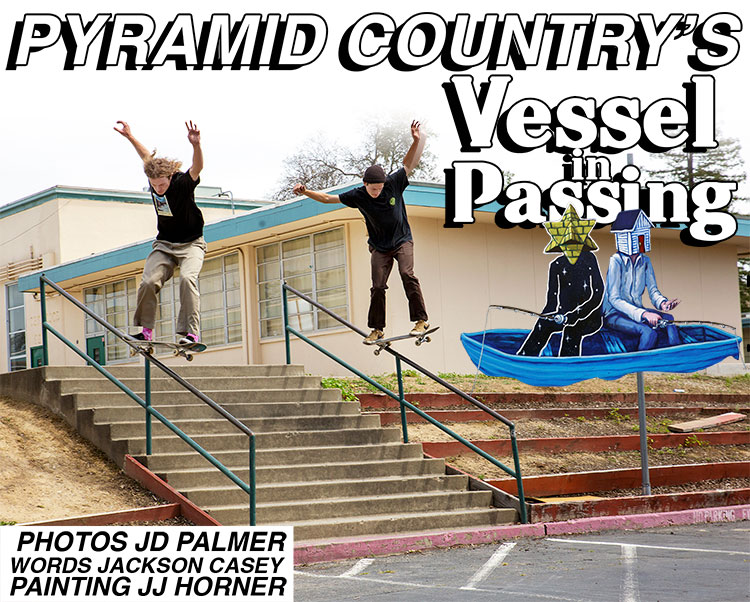 Klay Andersen and Rick Clark hitting this perfect rail from the front and backside at the same time. Careful, boys

Familiarity and the unknown: when you engulf yourself into a life experience full of the unknown, the unknown then becomes familiar. You then yearn for the warm coat on a chilly day that is the unknown, as it has now become a familiar face.

The Familiar:
One year ago, to the exact date, we did a ten-day trip to Sacramento to wrap up filming for a Pyramid Country video called Love & Gratitude. We also shot and wrote and accompanying article for the Thrasher ‘site. We decided to make the trip again this year, while finishing up our new video, Vessel in Passing. We traveled through Coachella traffic to get there both years (which is hell), we were shown around by the same group of people, we got drunk at the same bars, we even skated a lot of the same spots and half the crew was the same.

The Unknown:
We were supposed to be in Sacramento for ten days. Unfortunately, our Airbnb was accidentally booked for the first four days of the trip, so we stayed on Robbie Brockel, Jack Olson, Tim Fulton and Corey Millet’s floor for those days and we skated Los Angeles on a whim for that long weekend. Instead of just the van, we also had another car in tow, driven out from Arizona by our friend Pete Grannis (thank you, Pete!). Jonathan Pierce, Rick Clark, JJ Horner and Kevin Skutnik all came along this time. JD Palmer was with us to shoot our photos—his first Thrasher assignment! No Papke, no Braun and no Townley this time. Robbie Brockel decided he wanted to come with us at the last minute and also said he’d drive my van the entire time he was there—fine by me.
As familiar as the trip, the dates and the city were, it was also very different. Never stop searching for the unknown. Even if you’re looking for it in the familiar. We hope you like the photos and our new video. We’re really happy with how this one turned out. Cheers! 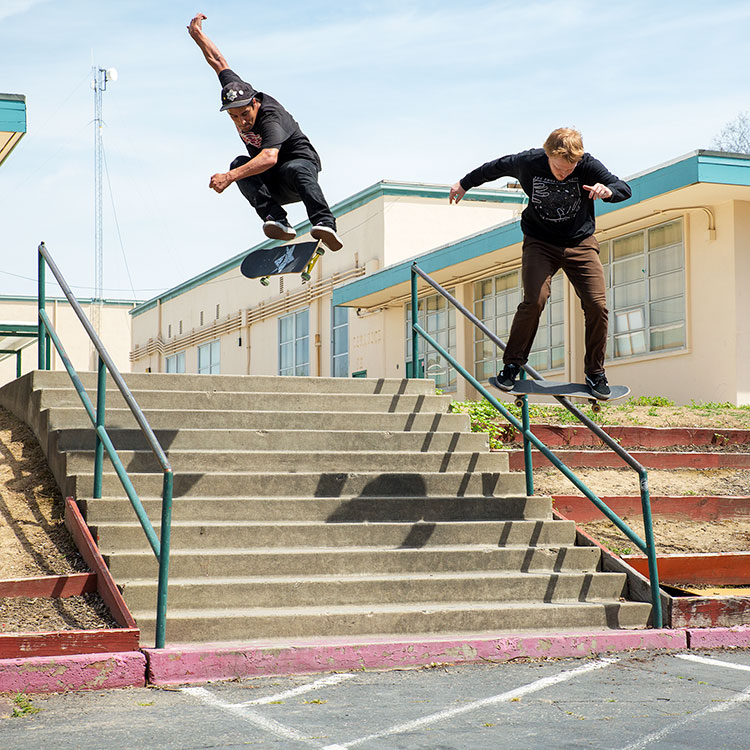 After seeing Klay and Rick get doubles, Jonathan Pierce and Jack Olson got hyped and ran a train of their own

After running those trains, everyone needed a blunt to wind down 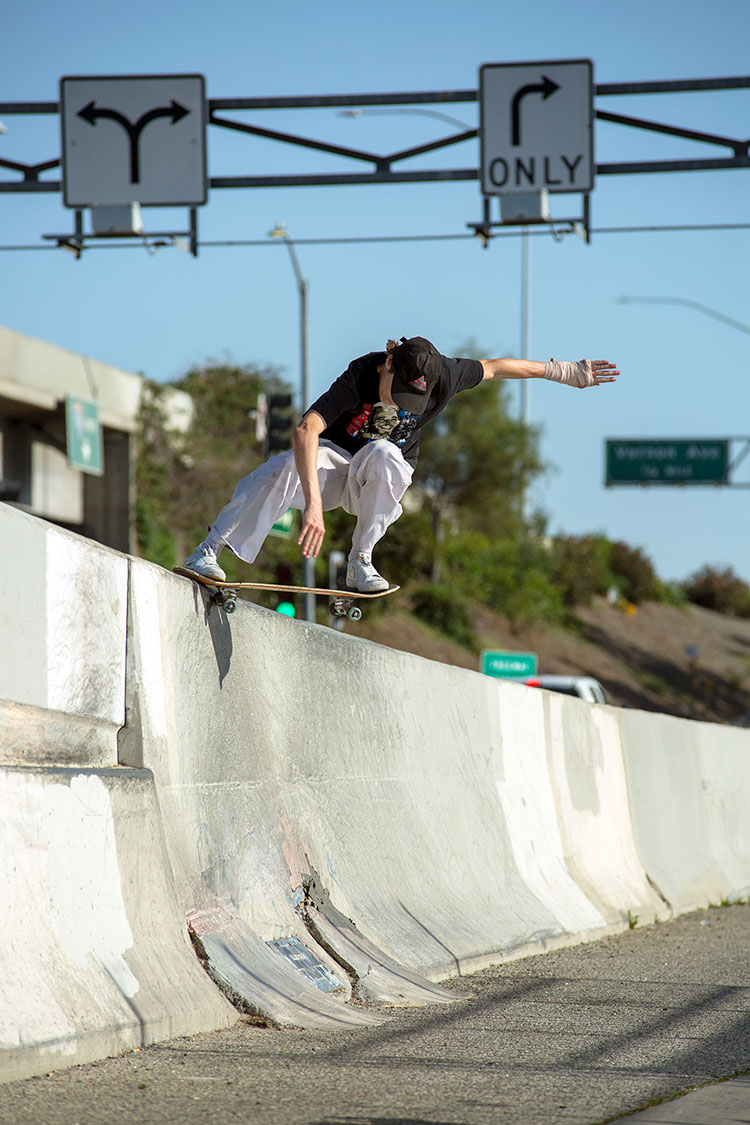 This spot’s fucked. Wait ’til you see what he did here in the video! Aaron Goure, noseslide 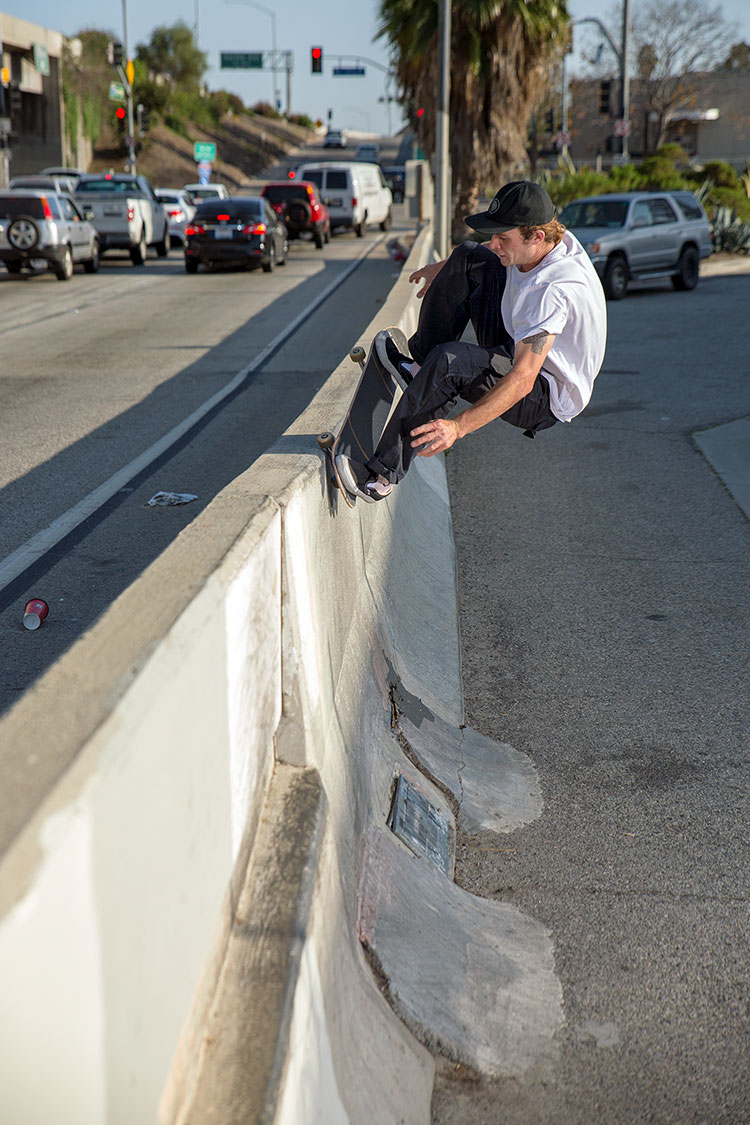 We saw that Mason Silva just did this, too. That’s tight. Klay Andersen, frontside nosegrind 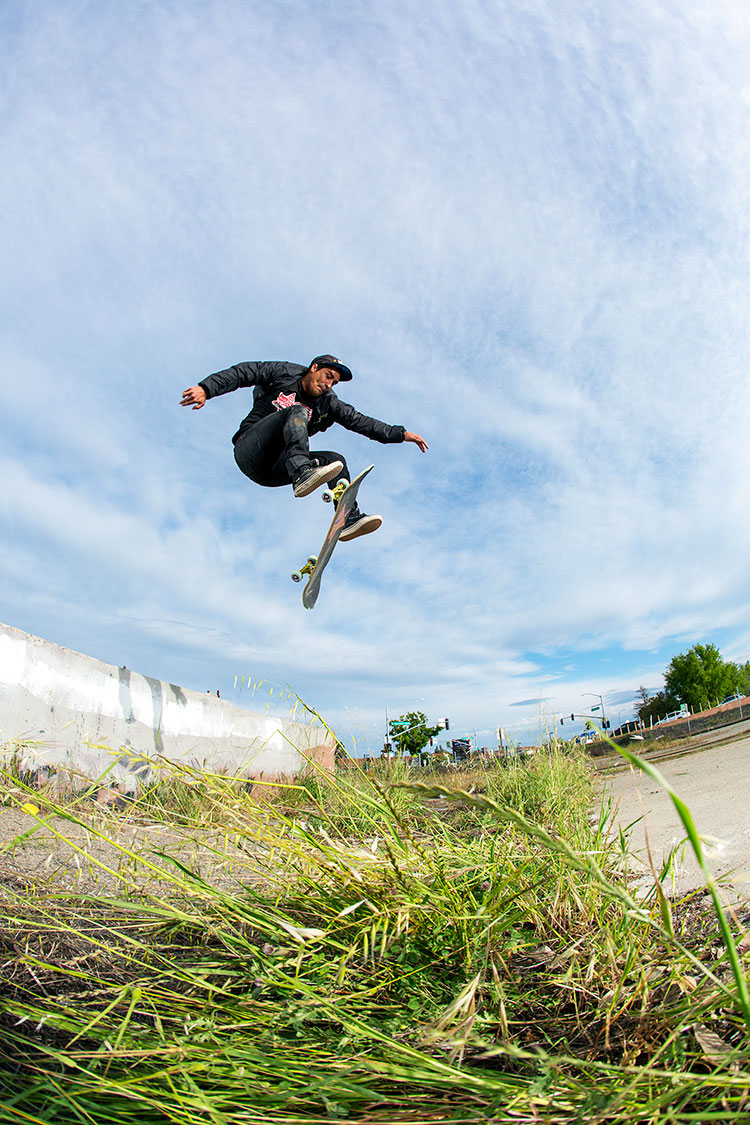 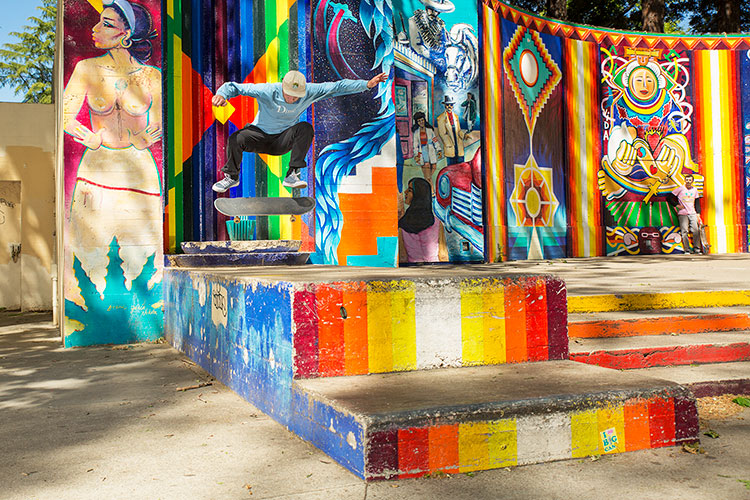 The familiar: Aric Blattner’s only photo on our last Sacramento trip was also a switch flip.
The unknown: New spot, new photographer—I guess a million other things, too 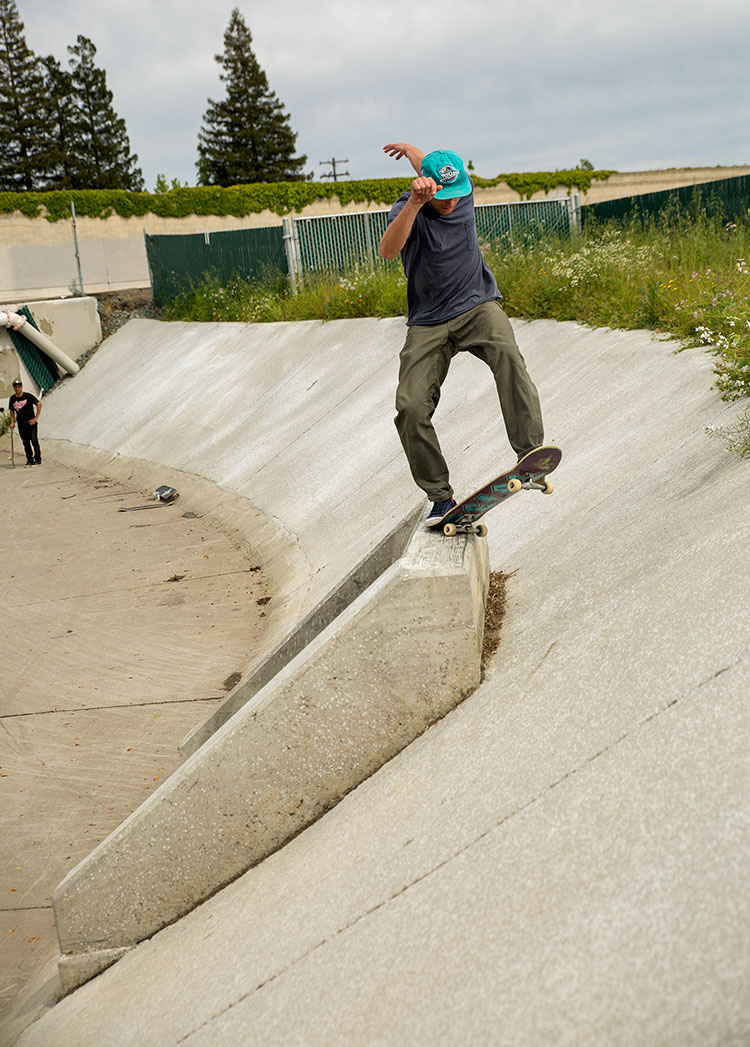 I got no clever caption for ya, Robbie. You suck at 2k. (Alley-oop frontside 180 nosegrind to forwards) 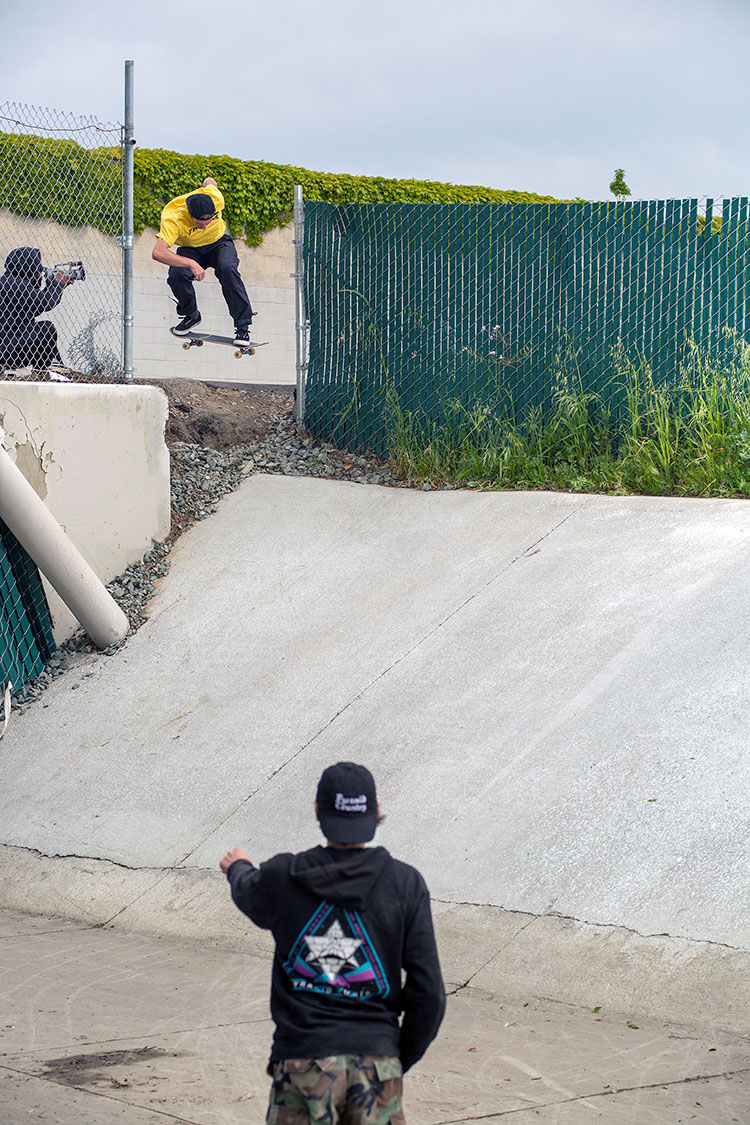 This half Cab was fucked! Aaron is at the bottom of the ditch trying to shoo two stray Pitbulls off that ran after Klay as he rolled away 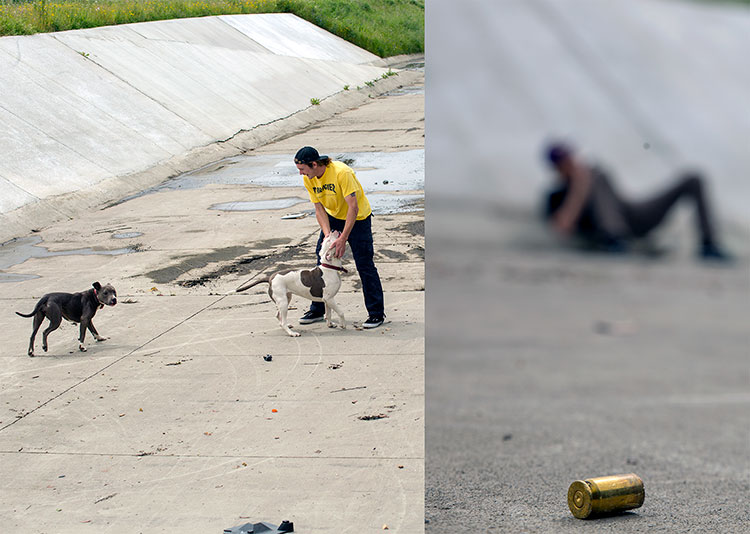 This spot was sketchy as hell—at least while we were there: There were bullets scattered around, stray Pitbulls, gnarly tricks, drug deals, dudes asking us how much our camera gear cost (us lying, saying we got everything at Goodwill—which you should do, too, if someone asks you how much your shit costs) and then more dudes rolling up later saying they’d heard we had cameras and to “give them up.” Fortunately, we’d just bagged everything up and told the dudes that the guys with cameras had already taken off. Woulda sucked to get robbed on day one of a seven-day trip 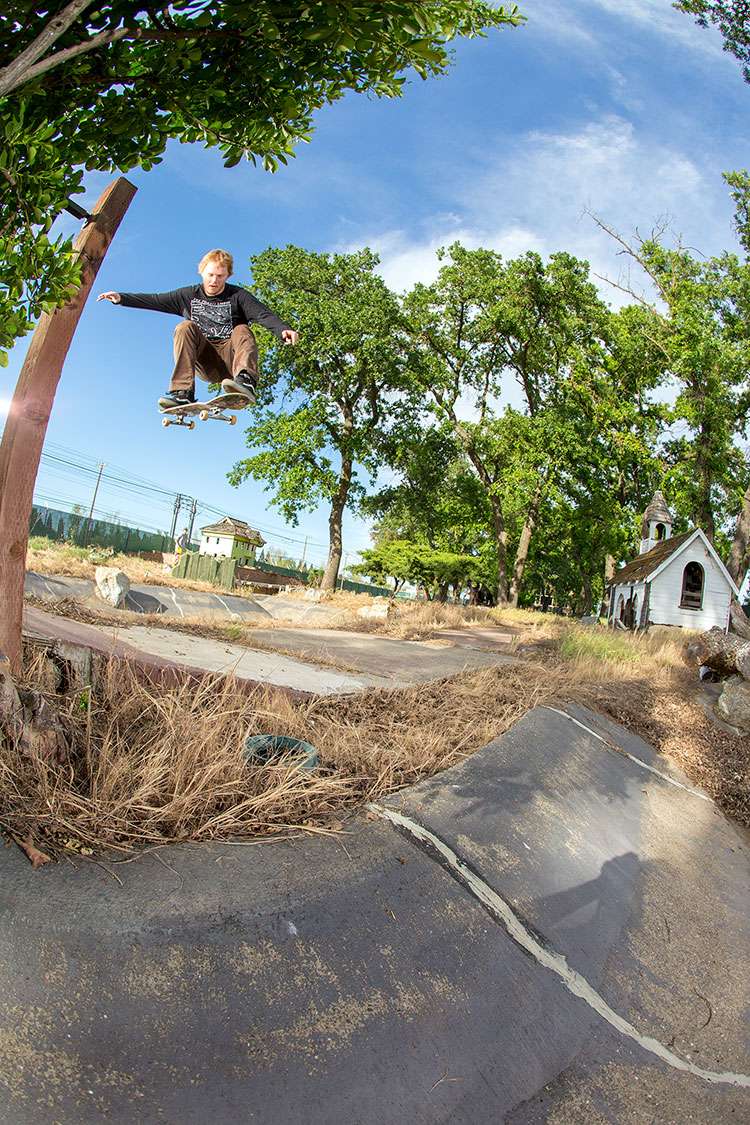 I love it when an ollie makes its way into a video or article—it’s becoming more and more uncommon with the direction skateboarding is moving in. This abandoned mini-golf-course was awesome 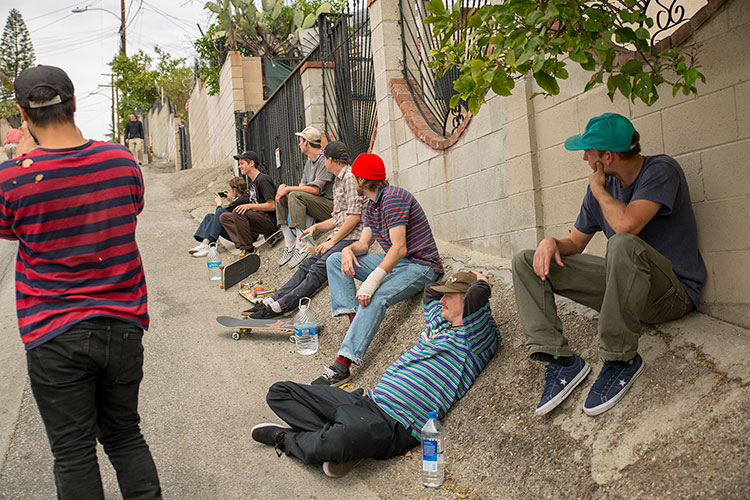 Bunch of piles laying in a an alleyway in LA 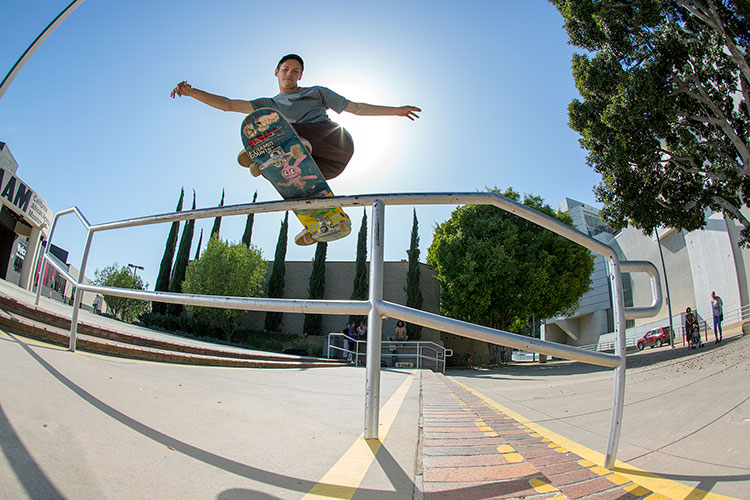 We forgot wax so we did the ol’ wax-paper-cup trick to get this rail to slide better. Rick Clark, front board 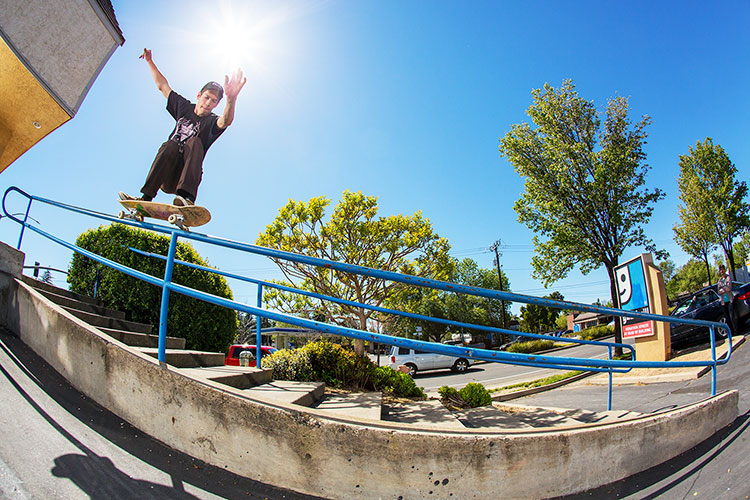 Goodwill was good to Rick. He got his ender with this 50-50 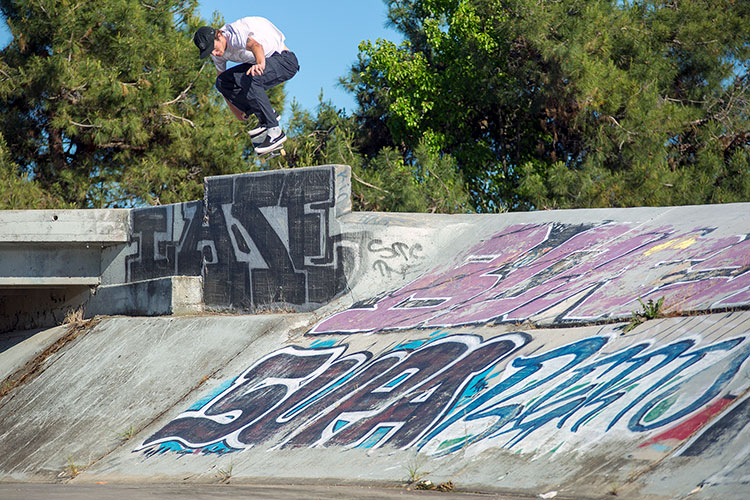 Klay got this ollie into the ditch first try. The hardest part about skating this spot, for him, was the insane hike we took to get there. We forgot to bring any water and there were tweakers and dogs running all over the place. Such is the ditch life 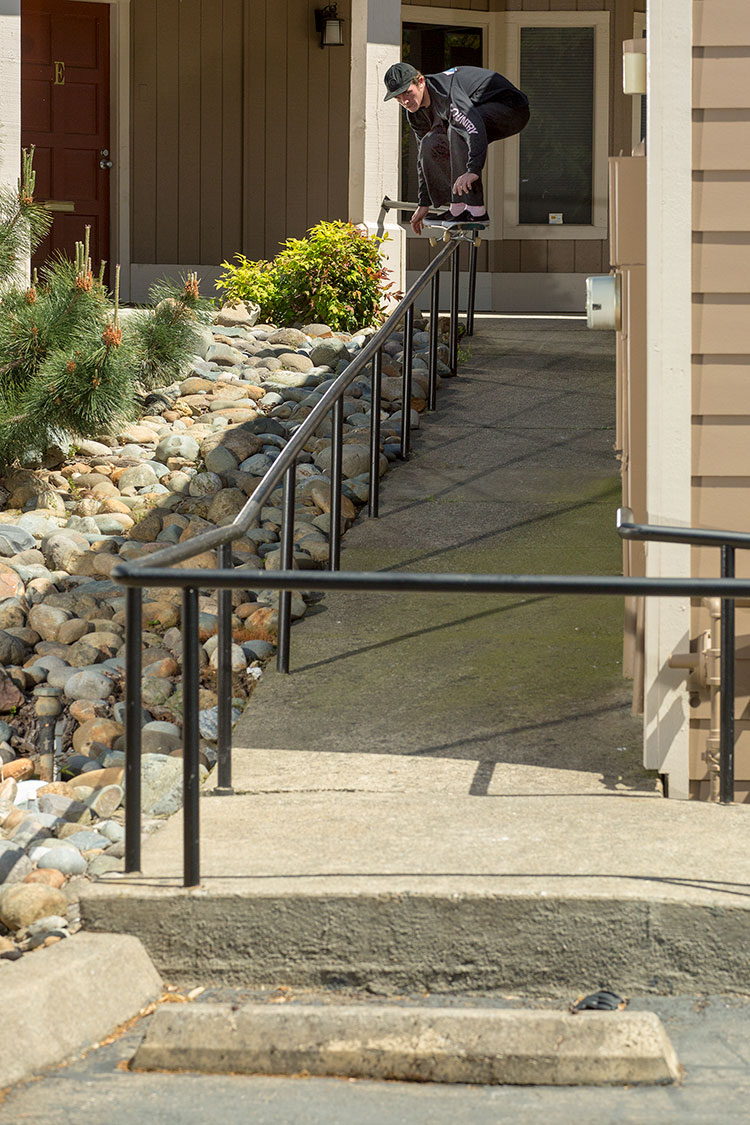 The familiar: Klay tried this 50-50 last year
The unknown: That one year later, he’d be rolling away from it and that Jack Olson would film it better than I did

We hope you enjoyed the article and our new video. See you out there in the unknown. We love you guys