Pyramid Country's "What Comes After The Passing" Article 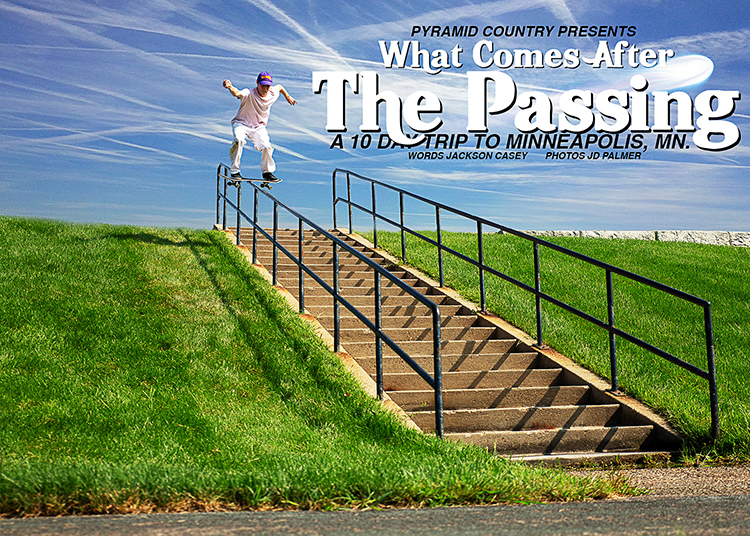 We finished our last video, Vessel in Passing, in mid June. After finishing a big project, the entire crew is always kind of like, What the fuck do we do with our time now? Starting from scratch on a new skate video can be a very daunting and intimidating task, especially as our bodies wither away. The majority of the Pyramid Country crew still lives in Phoenix, AZ, and since Vessel in Passing came out in June, we were fucked. There wasn’t shit to do. The forecast showed 115-degree days through September.

We began throwing around the idea of a skate trip along with the concept of creating shorter edits showcasing our travels, akin to the recent Atlantic Drift videos. But where to go? We considered Seattle, until we realized that Seattle is far as fuck from Arizona and much of that route is all too familiar with the crew. Then team rider Jack Olson hit me up and said, “You should just cruise to Minneapolis. I’ll be there and Robbie will be there, too.” I popped Minneapolis into the map app. and it was only 30 minutes further than Seattle. Our artist JJ Horner is also from Minnesota and much of our crew is initially from the Midwest, so it was a no-brainer. Off to Minneapolis we go! Big up to Tony Vitello and Thrasher for helping us out. It wouldn’t have been possible otherwise. And please check out the accompanying video if you’ve got time. Who are we kidding? You got time.

Davis Torgerson and Tanner Van Vark also happened to be in Minneapolis while we were there. As we’re all homies and those dudes are MPLS locals, they helped Jack and our pal Mitch Guth show us around. We were yelling, “Pull over!” literally every time we saw a spot, as someone in the crew would probably skate it. One thing we hit was on the shoulder of the highway. We pulled over—a fleet of four cars still running—and someone yelled out, “HOLY SHIT!” Without warning, Goure tried to caveman this mammoth rail and totally ate shit. I laughed, assuming he wouldn’t try it again based on how fucked it was. About five tries later, though, he’s riding away. We were celebrating and just as we climbed back into the van the cops pulled up. They asked if we were skating the rail. We said no and got out of there—ticket free. Nobody better show them this photo! 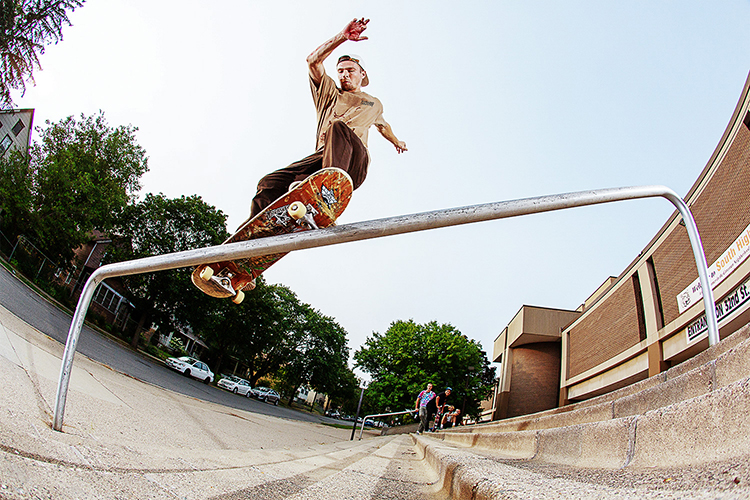 It’s easy to forget how fucking coarse and weather-worn the Midwest ground is. Blue paid the price when he rolled the dice on this switch Smith—note the blood all over his hands and shirt. I always wonder what it would be like to see someone like that out of context, like seeing Blue cruising through a grocery store with open wounds and blood all over himself. Regardless, it was an inspiring battle and he rode away from it despite the pain. 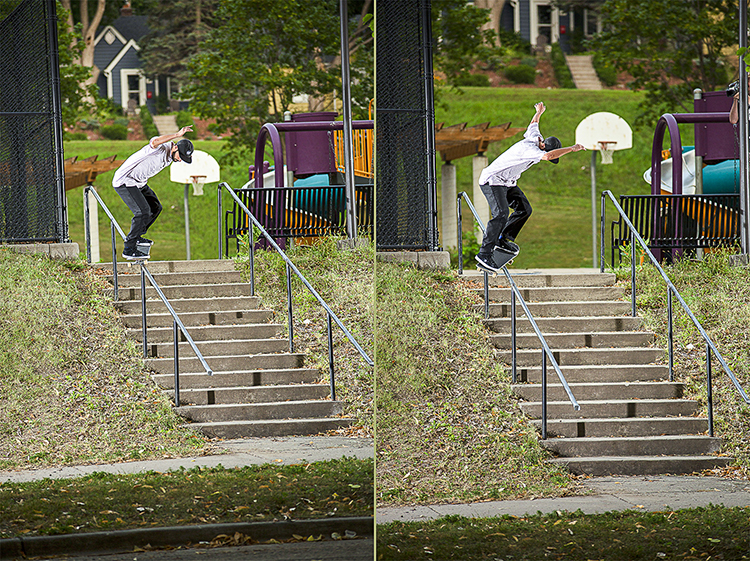 We were skating this bump over a trash can into a hill bomb. Kevin recently moved out to San Francisco, so naturally he was hot dogging his way down the hill, showing us flat-as-fuck-terrain desert dwellers the benefits of his new hill-laden lifestyle. Next thing you know, he’s cruising back up the hill, like, “Yo, theres a sick rail at the bottom of this thing. I wanna skate it if we’ve got a sign or Bondo.” We fixed up the crack and within five minutes Braun rode away from both of these tricks. Fun fact: he did both of these first try. 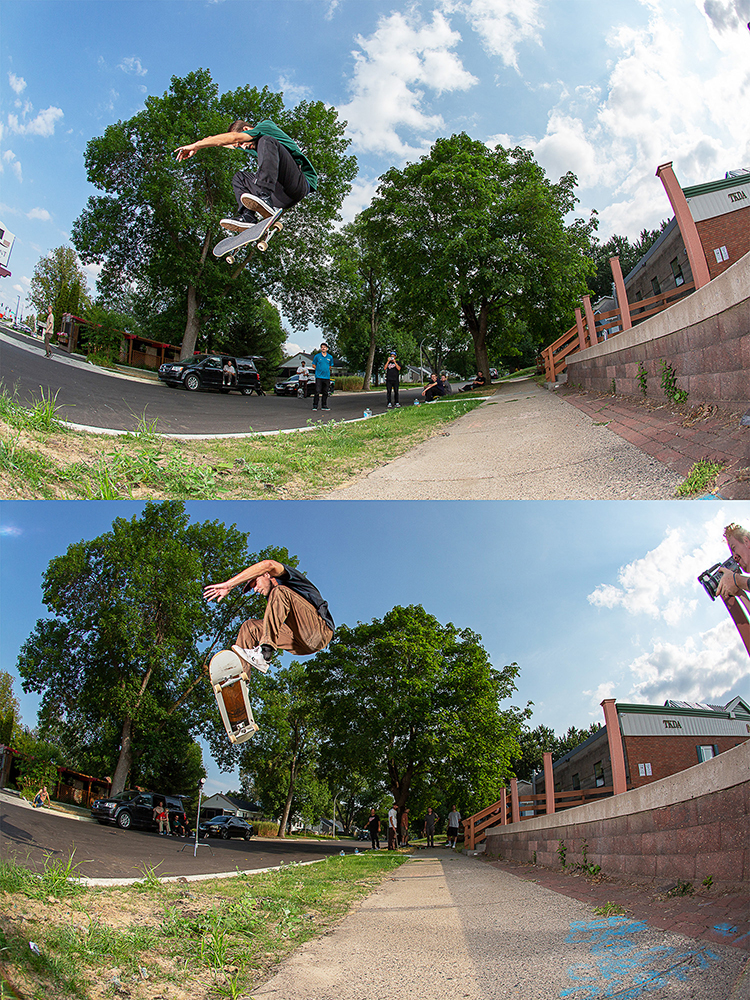 Our friend Pat Gallaher caught wind of a gap that had, “Only been ollied by Davis Torgerson.” That made it sound super fucked, but it turns out it was just brand new. Braun kickflipped it and switch flipped it—both second try. For some reason, everyone was more hyped on his kickflip. It’s not like he did the switch flip bad—he’s got one of the meanest switch flips in the industry—we just don’t see him flex a kickflip too often and it was rad to see. Brockel didn’t wanna skate the gap at first but we offered up enough tall cans and next thing you know this tré flip was easy money. Or easy tall cans. Something like that. 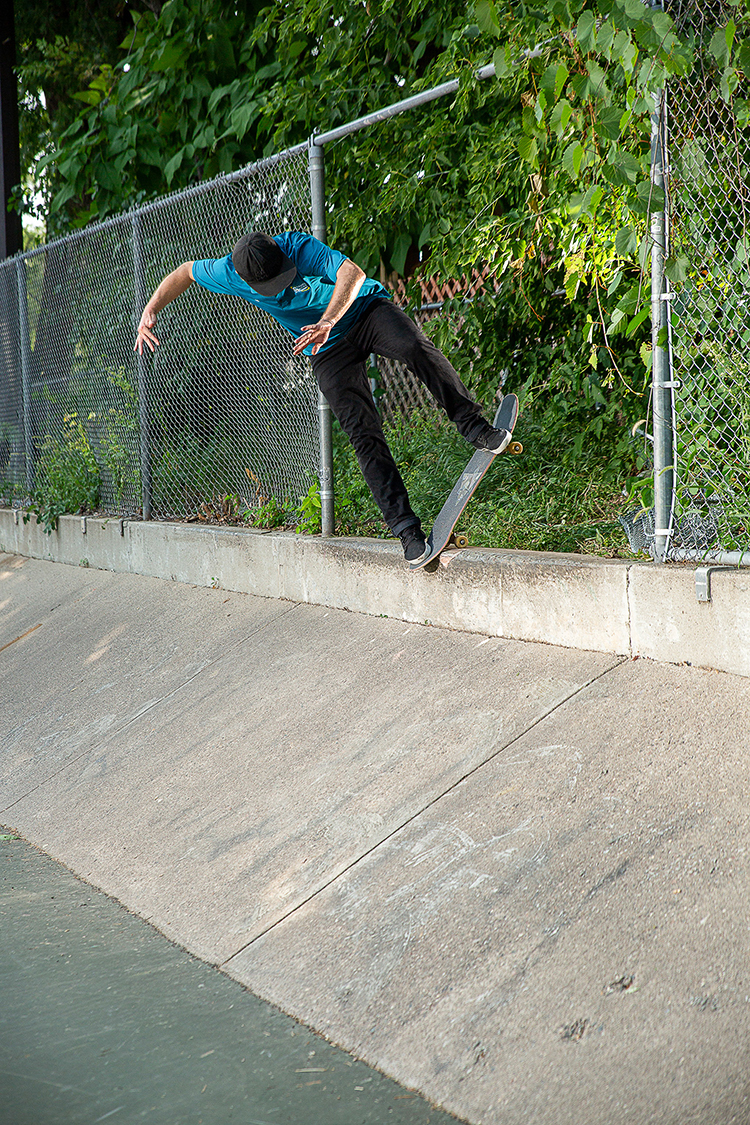 JJ, a Minnesota native and Pyramid Country’s very own artist and co-visionary, got the session fired up this day when he started up on this wallie blunt. It’s not every day the art dudes get video or photo love, so this was awesome to see. Everyone was hyped and the session went off at this spot. JJ told me he’d tried this trick eight years at a time when he was skating a lot more. Sometimes shit just goes that way—lil’ easier the next go ‘round! 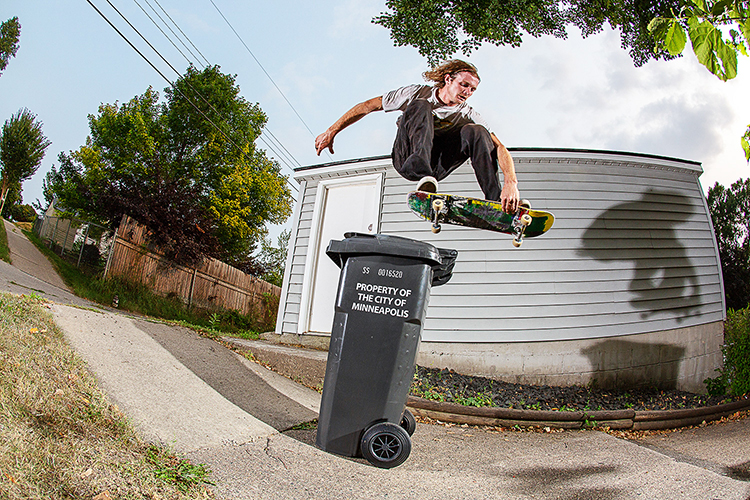 We rolled up on this sick ski jump to hill bomb and plopped a trash can in the middle of it. Klay flung a few ollies over it then out of nowhere he caught a Japan and flew down the hill 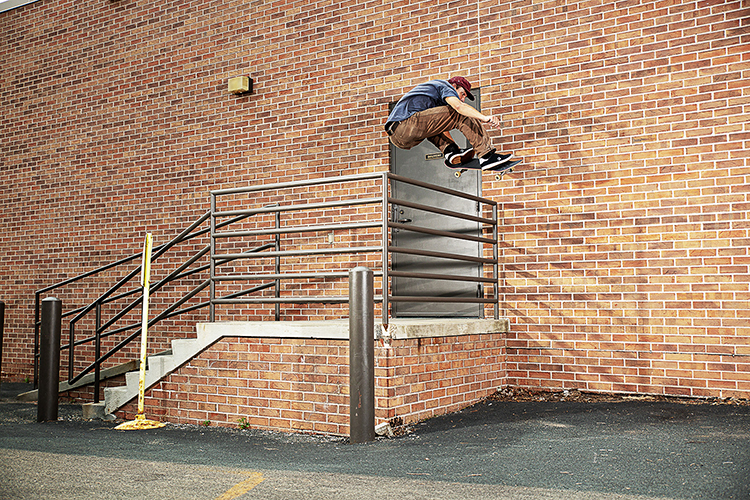 We heard about this bump to bar where you had to go on some covert ops shit to skate it. We found the spot, cruised around back, snuck the crew into a little nook and moved a big-ass trailer out of the way of the landing, then Robbie gave a nod and started sailing. Three or four tries later, we were back in the van and on the road. Robbie drove my van a lot on this trip. It was such a blessing after having driven all the way across the USA. If Nate Alton sees this and starts making you drive the DLX van, I apologize. 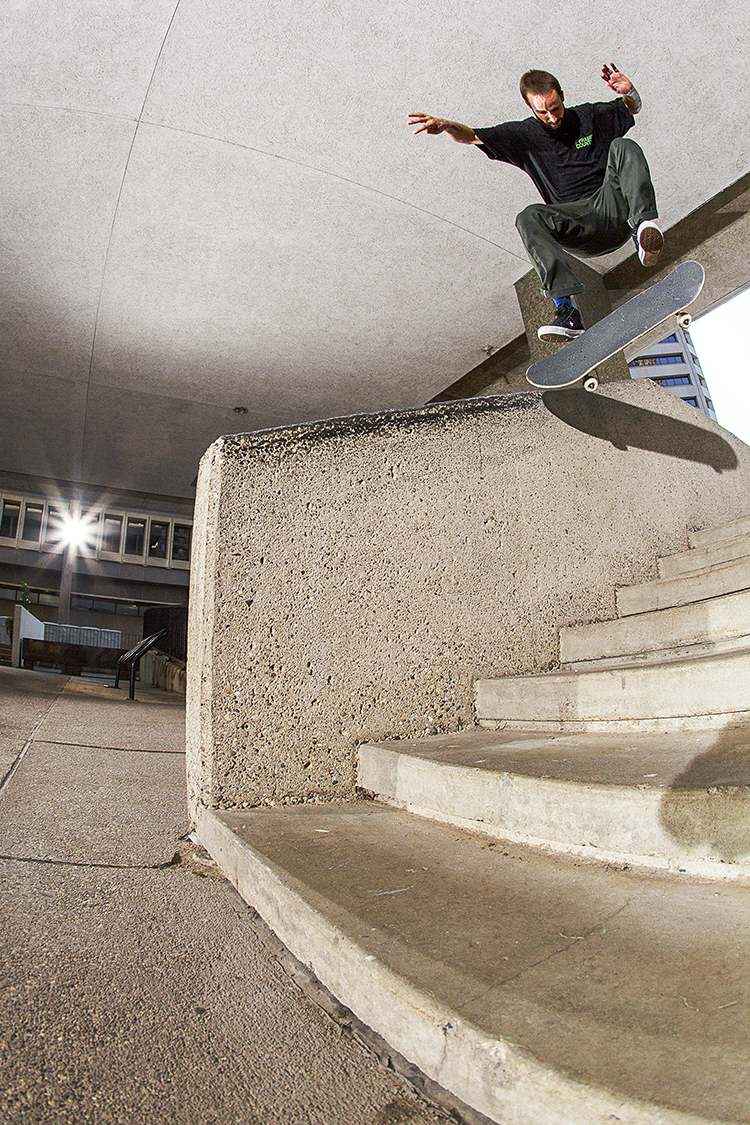 Pretty amazing spot here—pebble-tech ground and hubba, but still super good. You gotta ollie up a curb, which makes this nollie flip noseslide all the more impressive. The most shocking part about this trick, to me, was how Braun was able to ollie up the curb and essentially land already set up for a nollie flip. That’s some calculated mathematical skateboarding shit that’s second nature to him. You can see what I’m talking about from the top angle of this trick in the video. 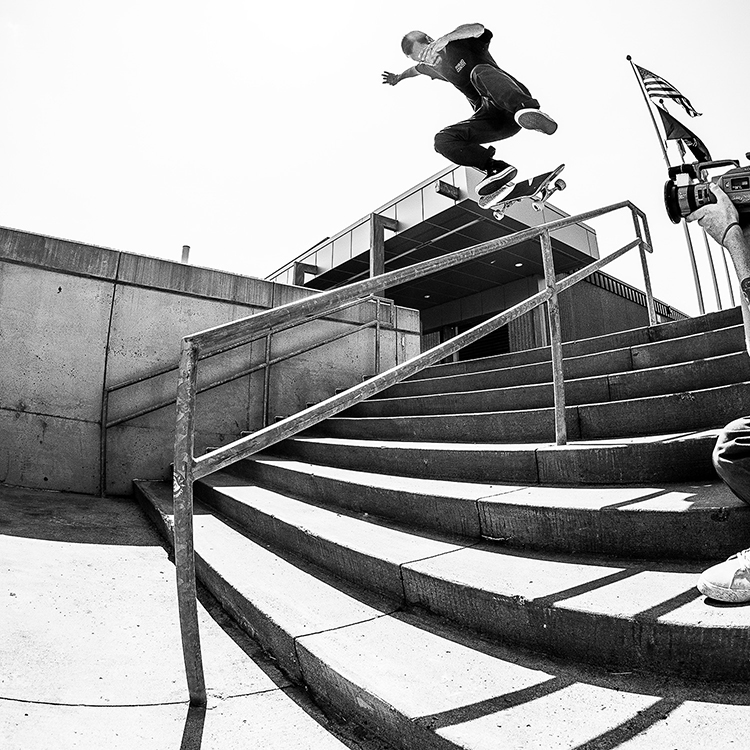 This rail is called “Perfect Rail” by the locals. The handrail in itself is pretty much perfect, however, the run up only allows you to hit it from one side and you gotta carve in pretty hard. Luckily, the angle was just right for Braun to get this switch flip boardslide. He landed this twice and I used both angles in the video (one fisheye, one long lens). 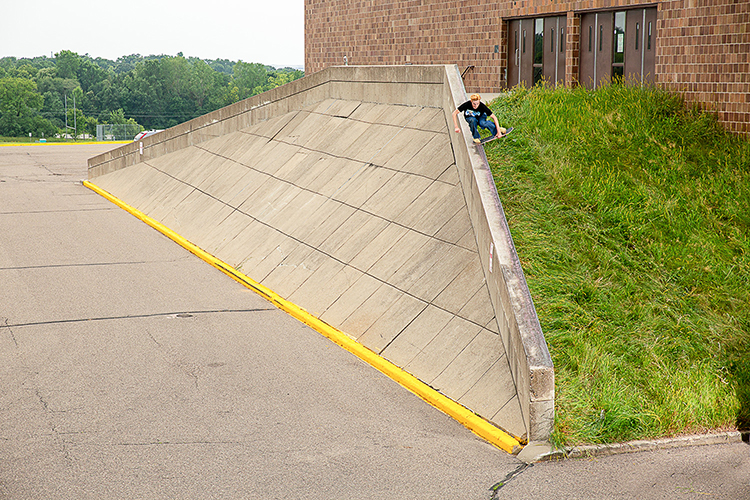 Just looking at this spot gives me a stomachache for multiple reasons: the majority of us took a little too much acid the night before and were still pretty fucked in the head when we got here. We were super out of it, as it was a fucking madhouse at our apartment the night before. We heard it was gonna rain the next day so we figured we’d take a night (and a day) to just pile out. Well, the rain didn’t happen and we lost our shit. Either way, I’m glad we forced the session and came out on top with some clips and photos! I’m also glad to be able to think clearly again. 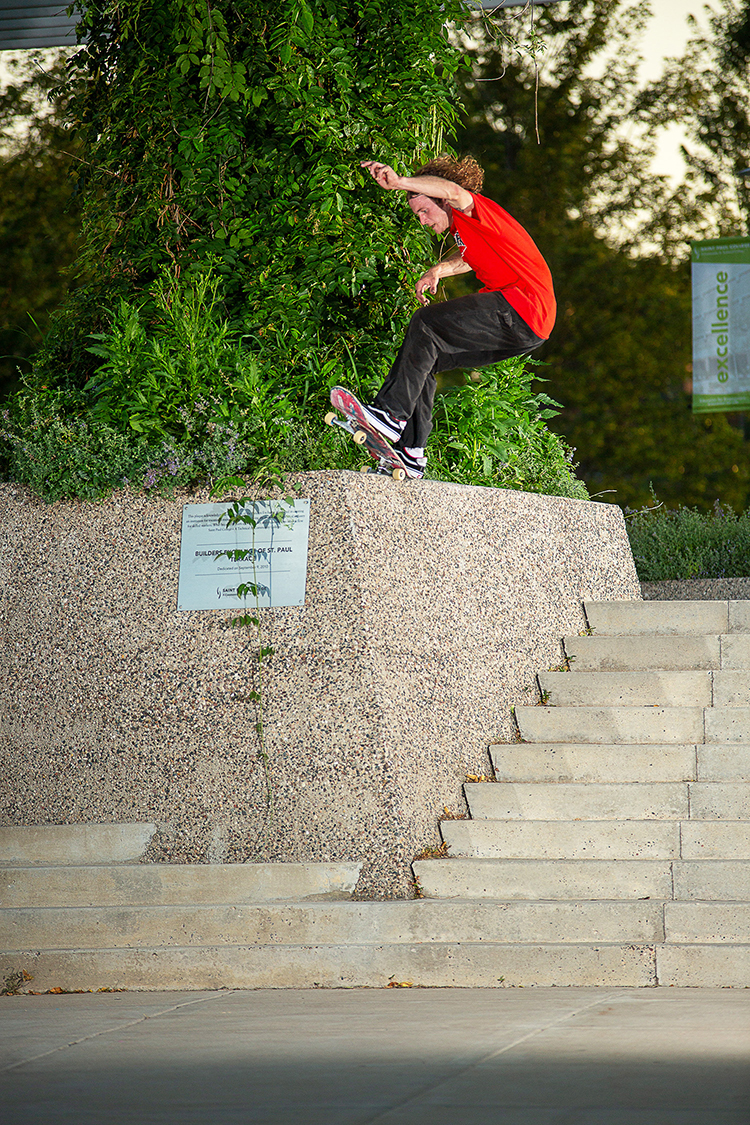 When we got to this spot I genuinely didn’t think anyone would skate it. The ledge is made of rocks—a kingpin’s worst enemy. I was scared as shit for Klay while he was trying this, but he bossed up his life a bit and handled this 5-0, no problem. We had a party in the grass as he rode away. Actually, we partied for quite awhile afterwards. 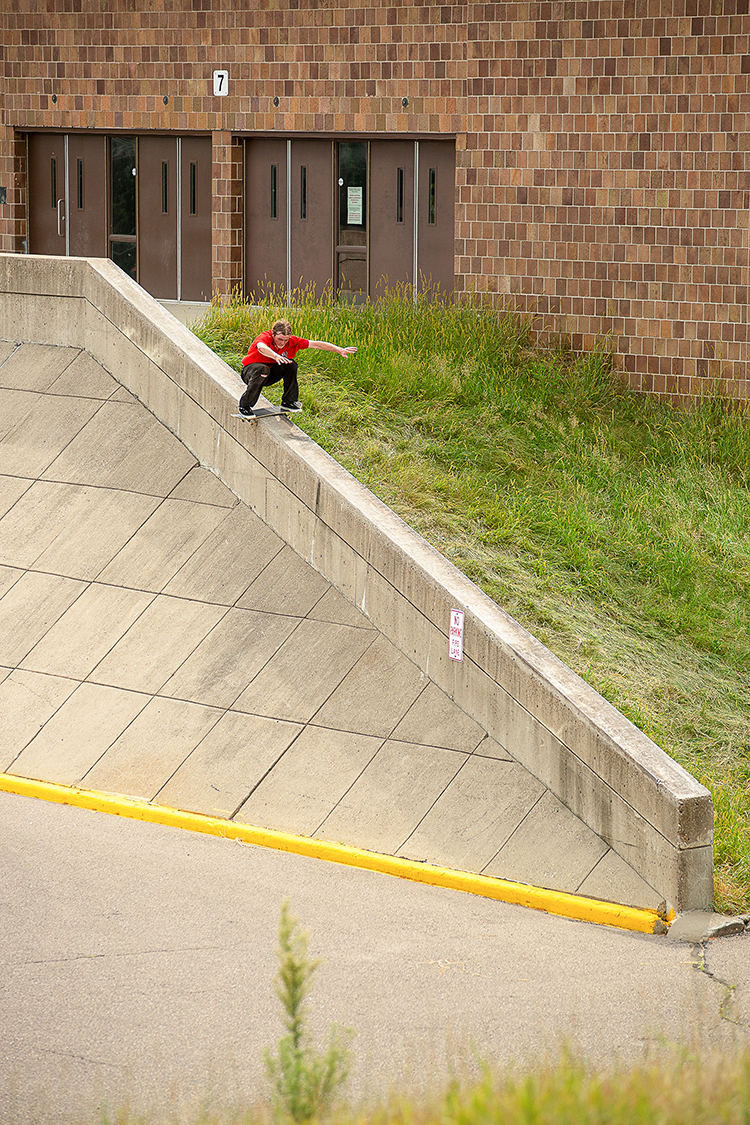 Return visit—This was on the very final day of the trip. The first time we were here we got kicked out by a good samaritan before Klay could get some. This was a super nice way to end the mission—a little retribution followed by a drive out to the lake we’d frequented all week long. I can’t wait to be on the road again. See you next time!

Also, on behalf of the entire Pyramid Country family, we love you all so much. Thanks for reading, viewing and watching.