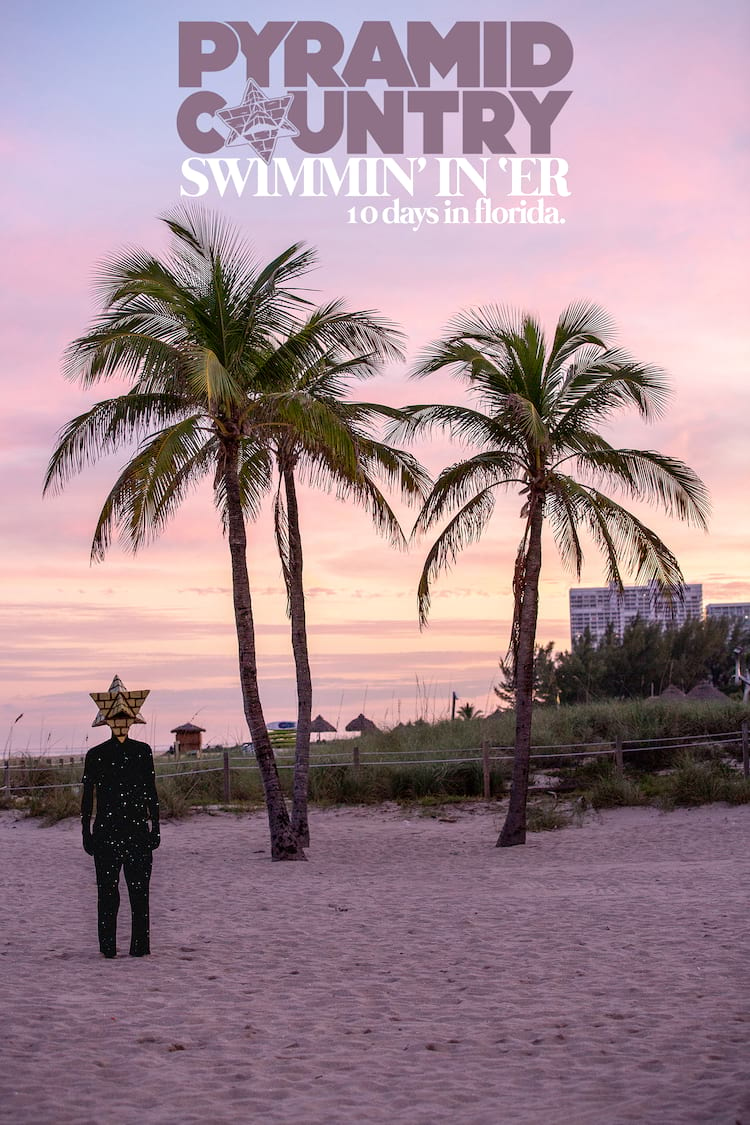 STUMPED ON WHERE TO TRAVEL WITHIN THE UNITED STATES FOR OUR NEXT TRIP, I began flipping through my Rolodex. Actually, I was scrolling the Contacts app in my phone, but you get me. Winter has its obvious limitations with regard to where you can go. I also generally think driving more than 24 hours to skate for ten days or less is not worth it. However, this time I figured, What better place to catch some warm winter weather than in the Sunshine State? And for some reason, a 40-hour drive from home didn't seem so long. So I hit up Blake Carpenter to see if he'd be obliged to show us around his homeland and he thankfully agreed. A few months later, we were on the long road to Florida from Arizona. We hopped on I-10 in Phoenix and drove on that one road the entire way to Tallahassee. Interestingly enough, this year Am Scramble had plotted a similar course as the PC van and we even ended up intersecting trips for a bit. That’s right, we had both the Pyramid Country boys and the Scramblers in Florida at the same time—quite the Thrasher medley! There must be some sort of skate siren singing from those gator-filled waterways. Glad we answered the call. —Jackson Casey 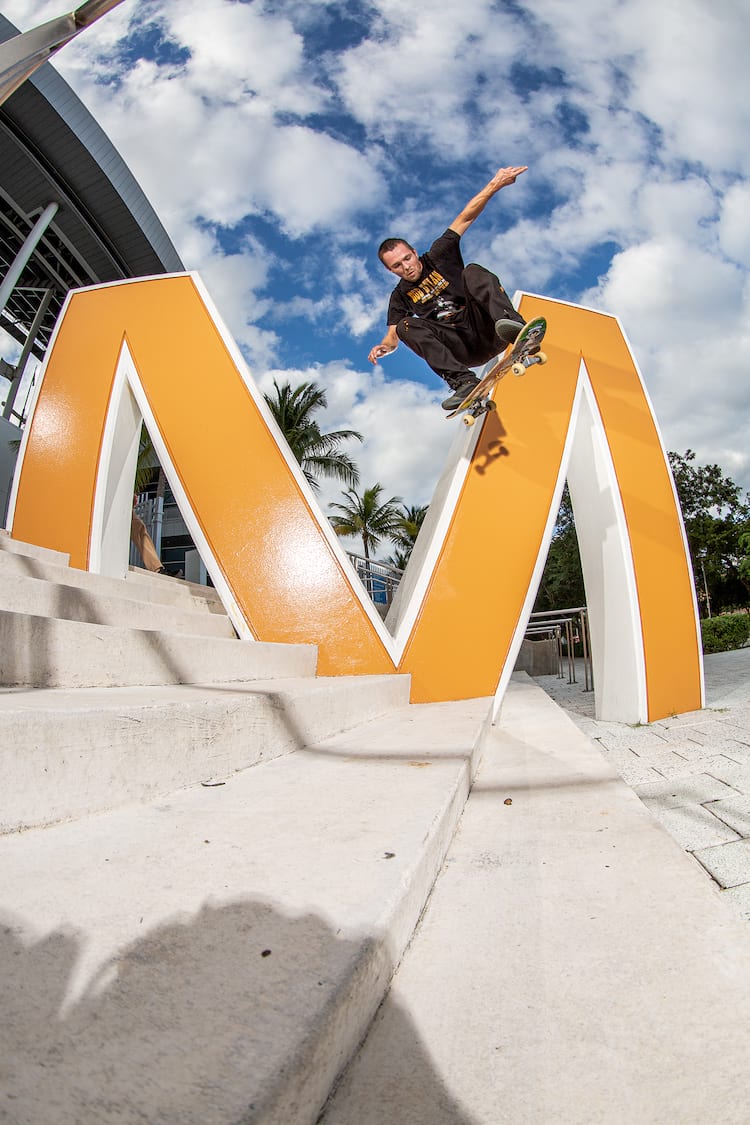 This spot was wild. It had huge skateable letters everywhere at the entrance of the Miami Marlin’s stadium. Somehow security didn’t kick us out, even though they were on the creep. Blue hits a home run heelflip on the metaphorical seventh inning stretch of our trip. 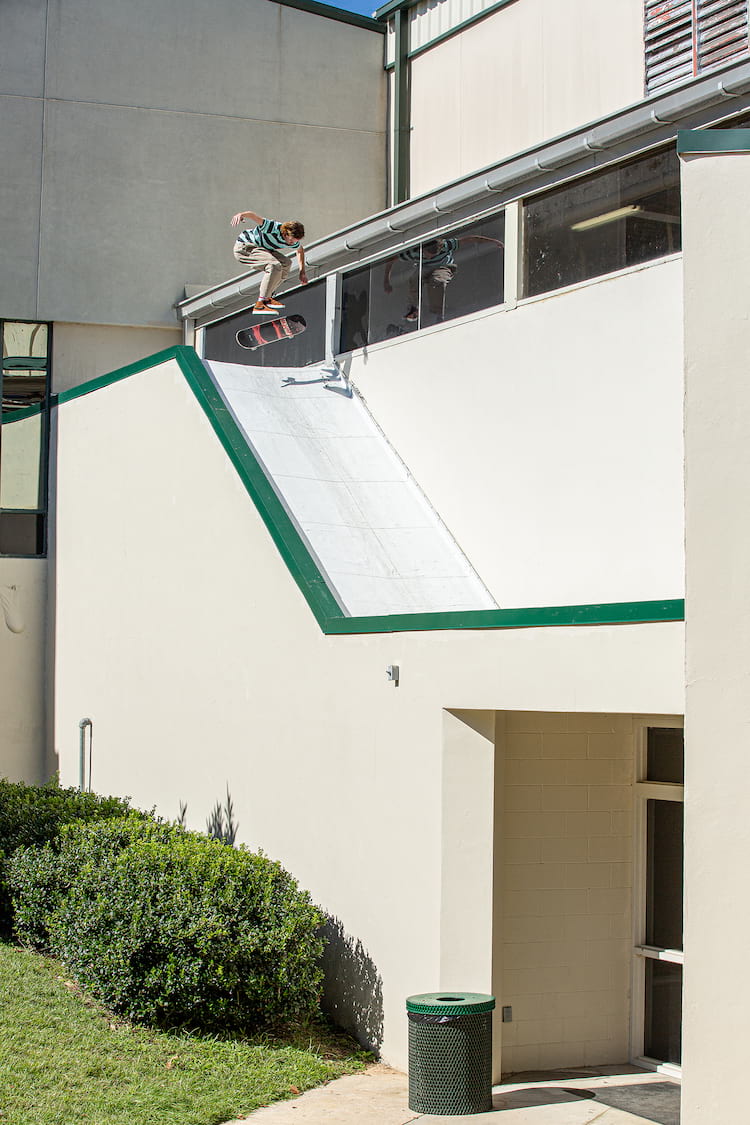 Aaron has a way with terrifying the boys while also laughing to himself. Needless to say, while we were praying for his safety, he thought this 360 flip was funny as hell. 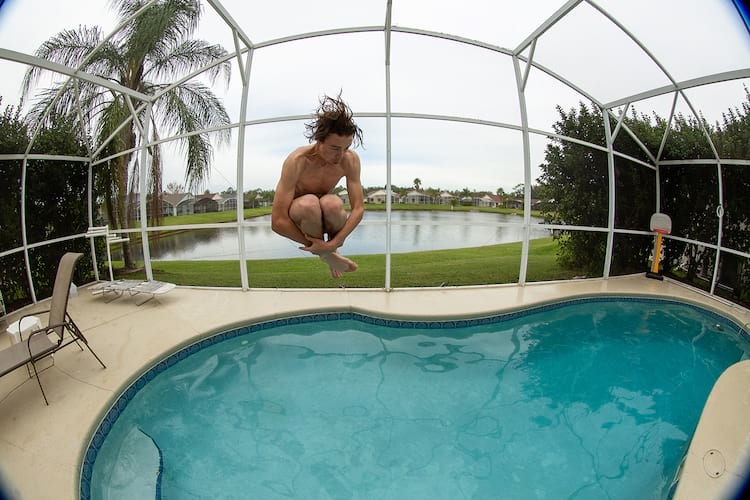 We pulled up to our Airbnb in Orlando and were pleasantly surprised by this indoor pool. Kind of a trip to be swimming in a pool, in a room, next to a lake. It was a nice amenity though, considering all those nearby gators are in a bad mood—they got all those teeth, but no toothbrush. We learned these rooms are called a lanai and are very common to have in Florida. If you’re buying a home in Florida with a lanai room, word to the wise: get one that faces north, so that the pool gets direct sun without heating up the entire room. Google, right?! 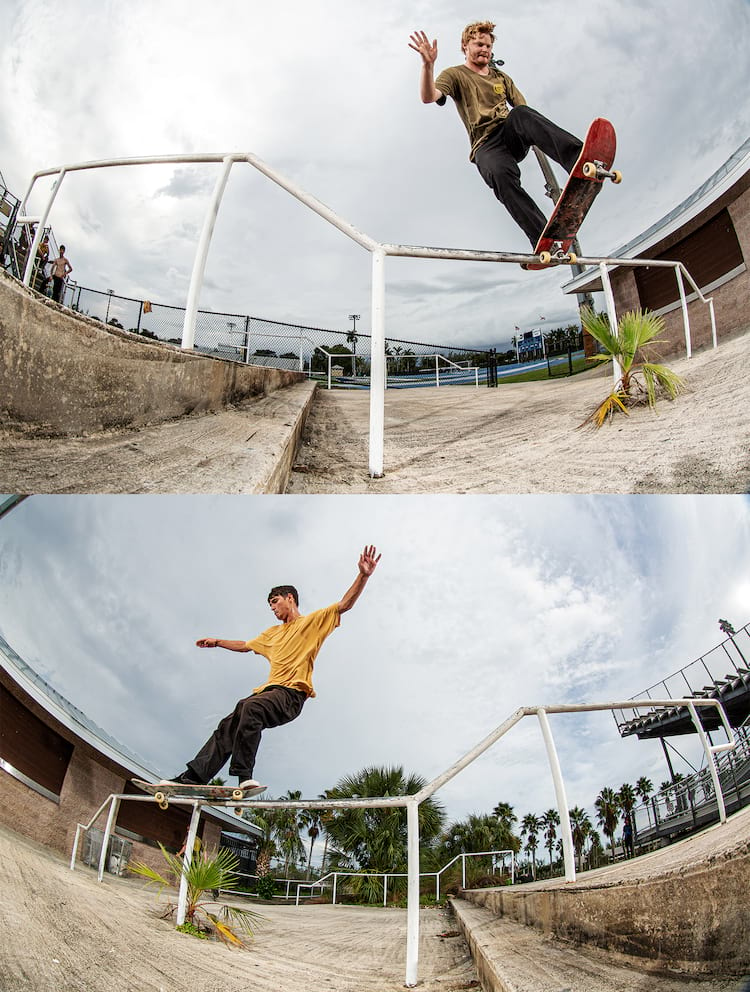 This was quite the tormenting spot. You had a harsh curve-in on the run up, then the dreaded out rail, followed by a very short landing space. Jack took a heavy slam on the front blunt after first getting one backside easy, but dusted himself off and pulled through. Gush handled this frontside feeble without any qualms. As if stacking two clips wasn’t enough to make this a worthwhile stop, we also saw an enormous iguana lounging nearby. 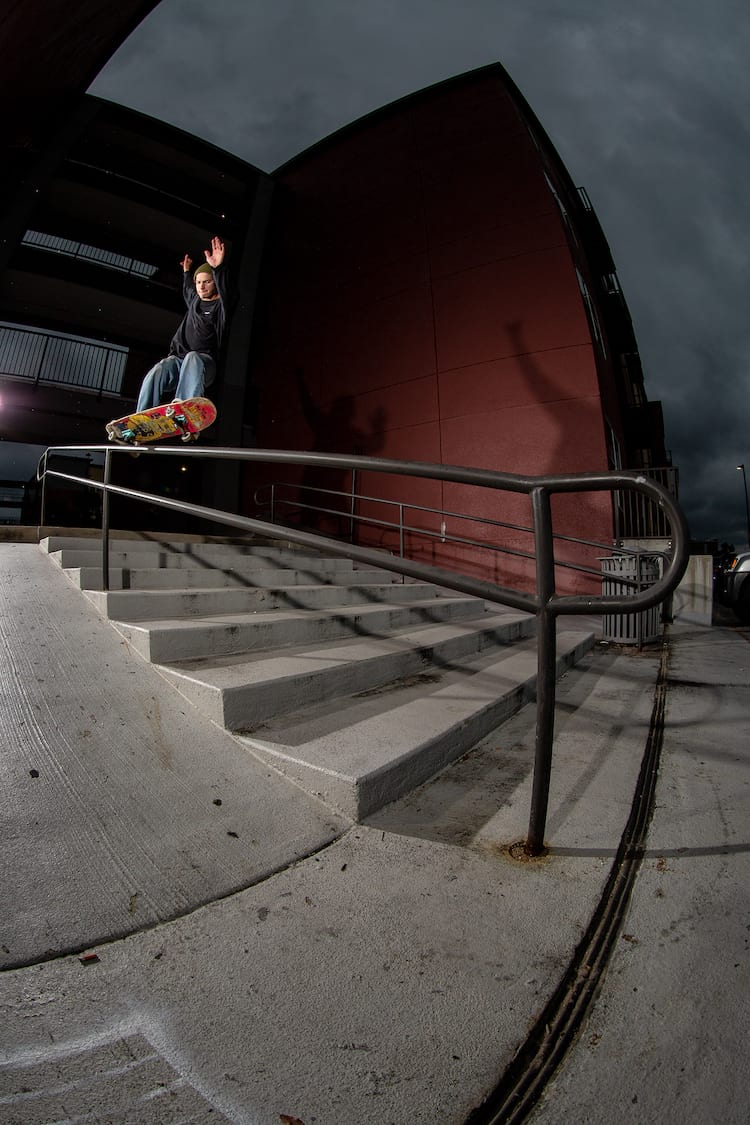 This was our very first day in Florida. We tried to find this spot on top of this parking garage for a good three hours before finally figuring it out. Upon finding this spot, where most people skate over the rail into the bank, it began raining. Look close and you can see some raindrops in the photo. The pressure was on but Rick wasn’t gonna let some precipitation slow him down. No problem for the Magnet Man. 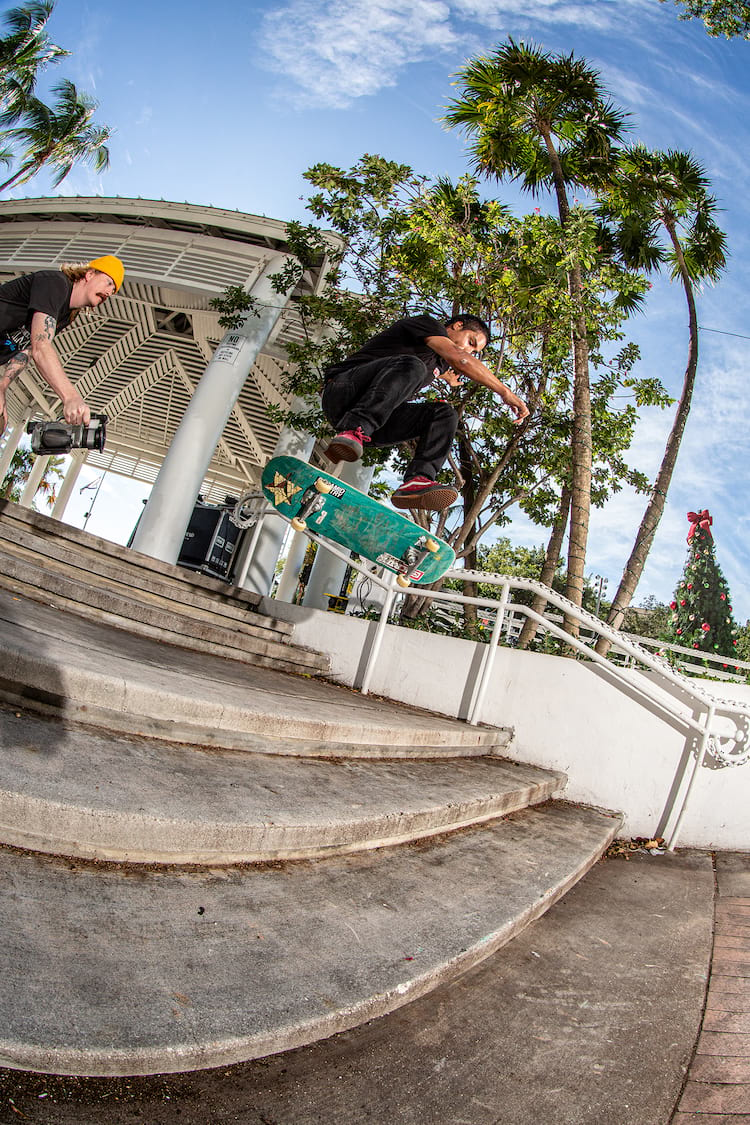 Last day of the trip, Jonathan could barely walk. While we waded in some shallow waters next to this spot in Fort Lauderdale, Jonathan somehow got the itch to get busy. It was utterly comical to see him walking up and down the steps in a similar fashion as the senior citizens slow-walking around this spot. Out of some age-defying miracle, however, he got enough pep in his step to roll away from this switch front heel. An older woman also scolded us for trying to photograph a turtle here, threatening to call the police. Just your usual Florida session. 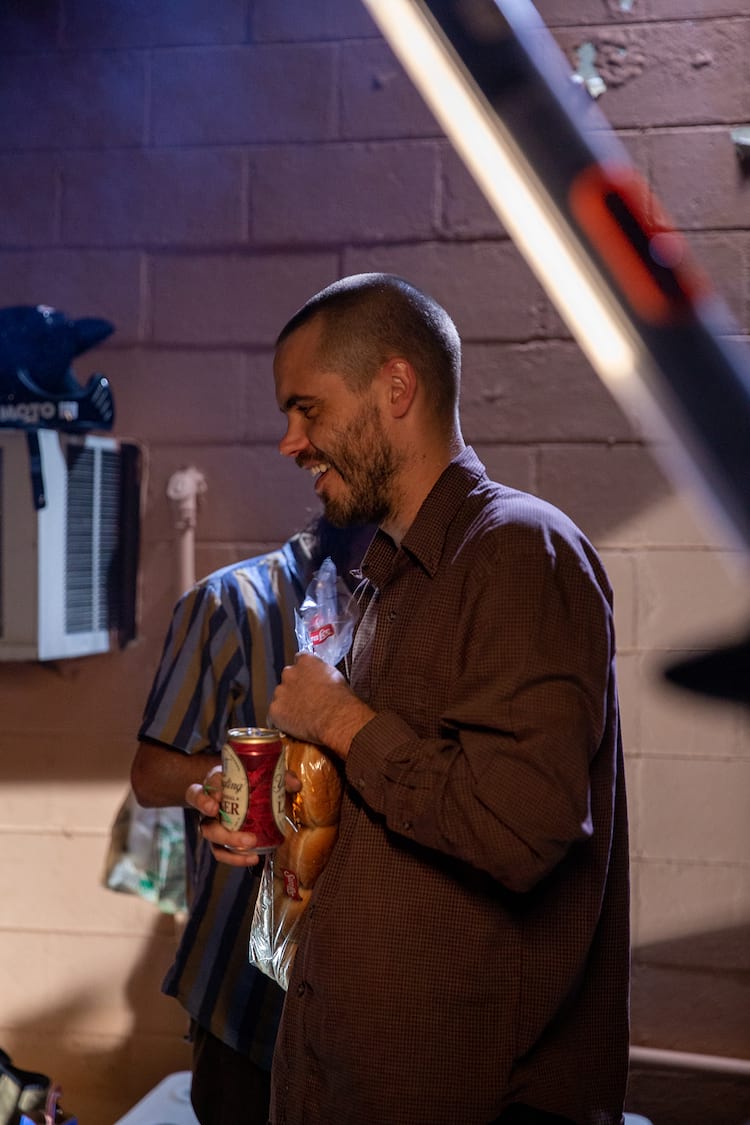 Here’s Keith Gibbs, one of the men behind the lovely Plus Skateshop in Orlando.Keith hosted us at Plus for a barbecue, meet-and-greet and art show. It wasn’t your average shop get-together. For one, the food was far superior to your average barbecue. They really went all out with the ultimate southern hospitality for us. Thanks again, Keith! 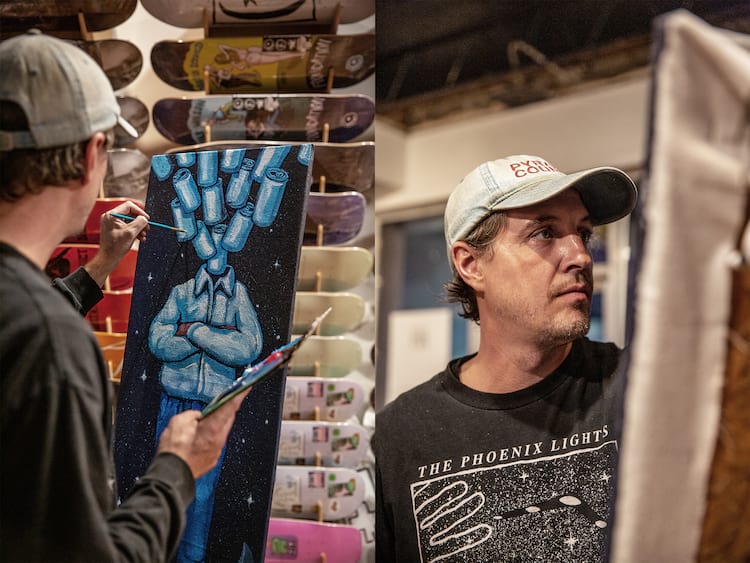 JJ Horner is the man behind the paintings, sculptures and storyboards you see in our work. Here he is live-painting at Plus Skateshop. It still amazes us what he can put together in just a few hours. 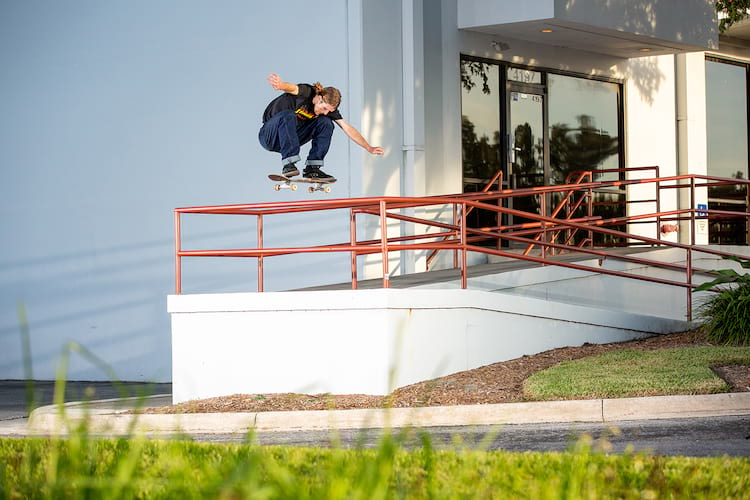 Dilo was a surprise guest on this trip for many of us. He just so happened to be in Florida at the same time and hopped in, then held it down. Nice havin’ ya, dawg! 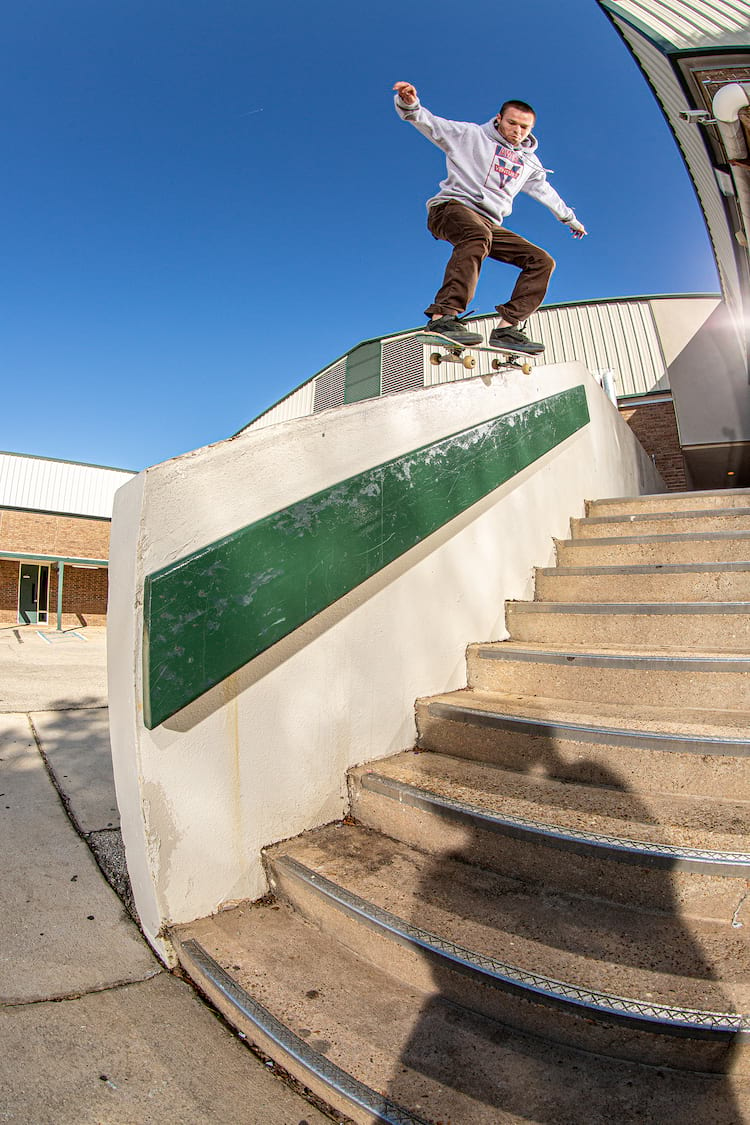 One of the scariest tricks to do on a curb, Blue takes to the next level without a problem. He actually ended up doing it twice, which might also be whole additional level. 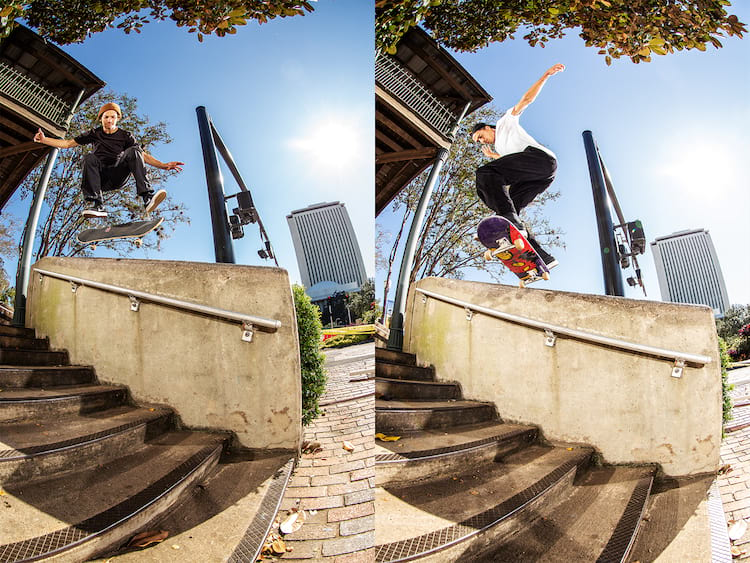 The Ricks were the only two that hopped on this hubba for any real action. Rick Clark kickflip backside grinded it with the trucks on the wrong side of the ledge. Then he cleaned it up a few tries later and Blake got his back shortly after with this massive switch back tail. They shared the exact same scabs on their palms from the same type of slam. They might actually be blood brothers after that session. 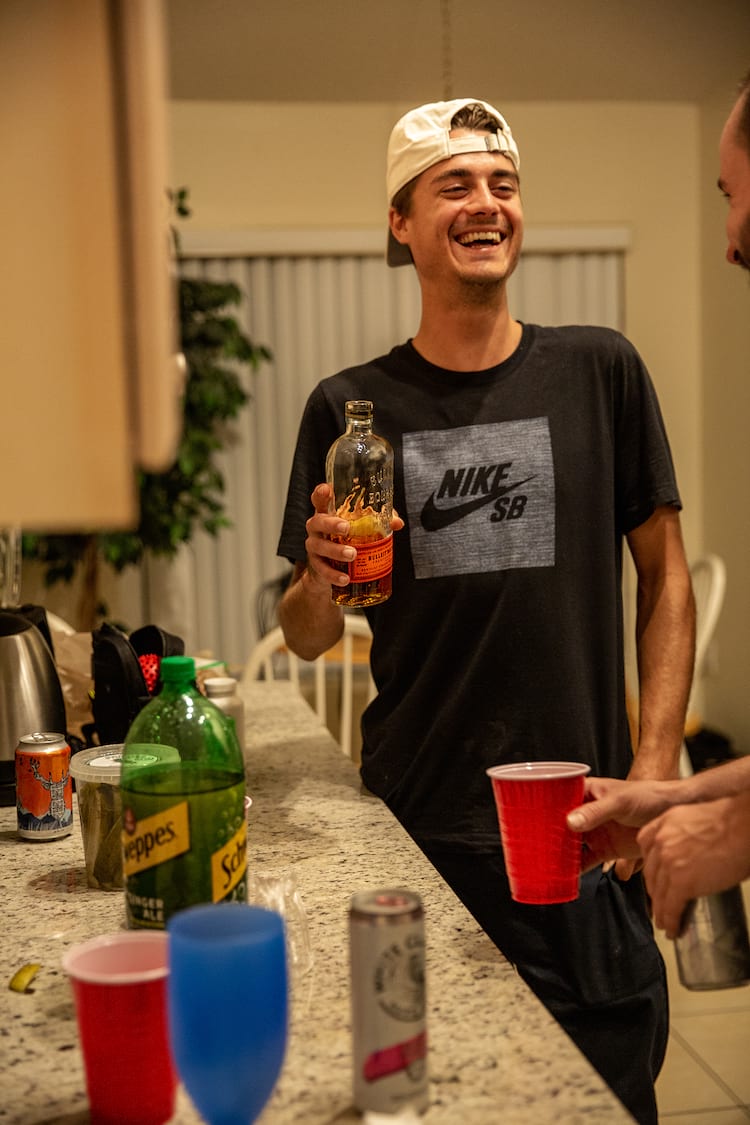 Blake Carbartender kept the spirits high by making sure all of our beverage needs were accounted for. 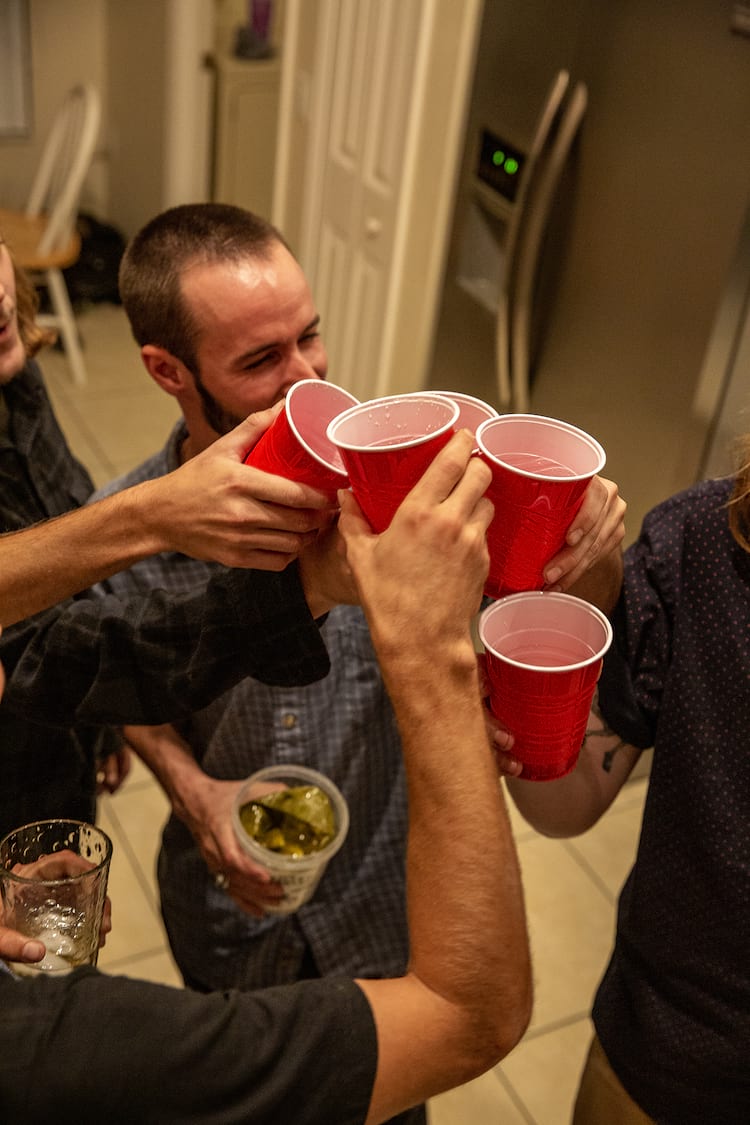 There's nothing like a cheers with the squad after a long, successful day of filming—l'chaim! 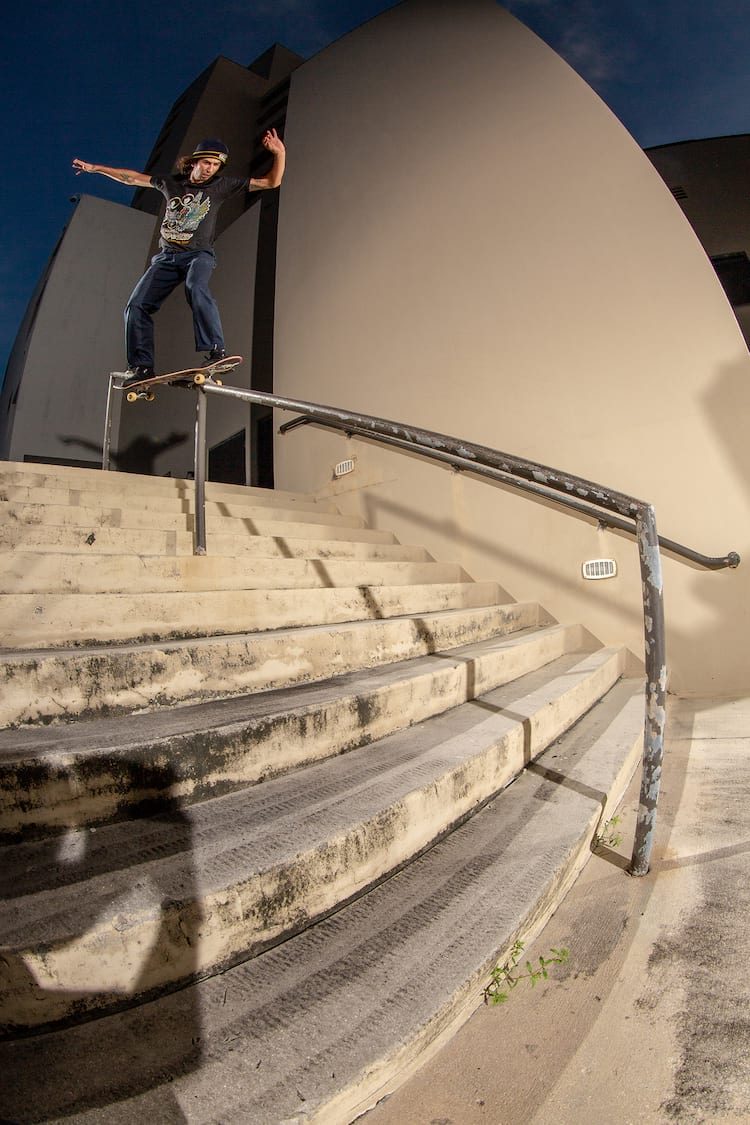 We started bringing Nicky on our trips to help me with filming. Nicky rips hard as hell on both sides of the lens. He came out victorious on this astronomically large and steep rail with a Willy grind for Patti. 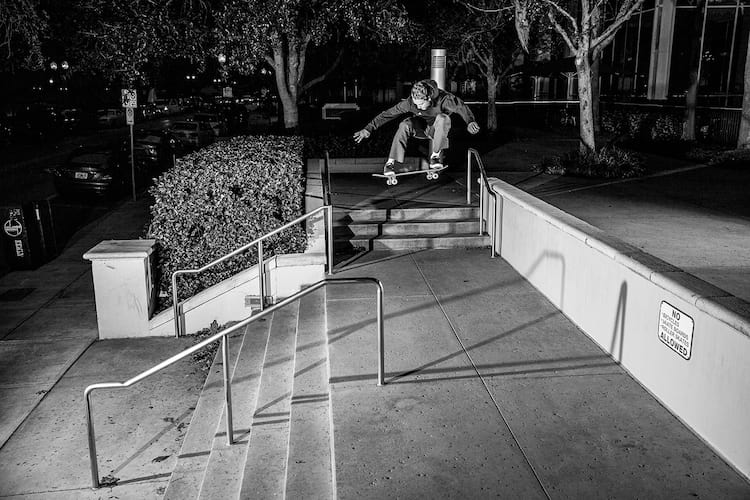 This ollie has been long-dreamed about in the Orlando skate scene. Everyone we ran into that had heard about it said, “Man, I didn’t know if that was possible! Finally!” It was rad to be there while local history was made. Thank you, Blake, for letting us share your skills with the rest of the world now. 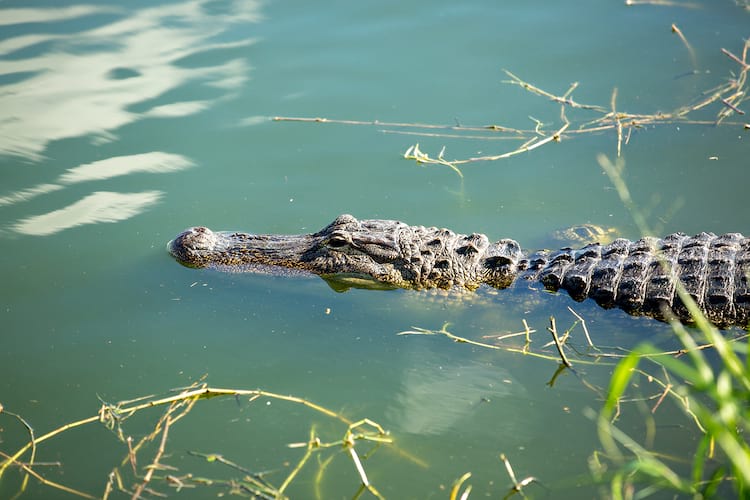 After a long search for the native swamp monsters in the wild, we finally decided to go to your favorite skater's favorite gator sanctuary on the last day of the trip. Thanks for the pin, Dilo. 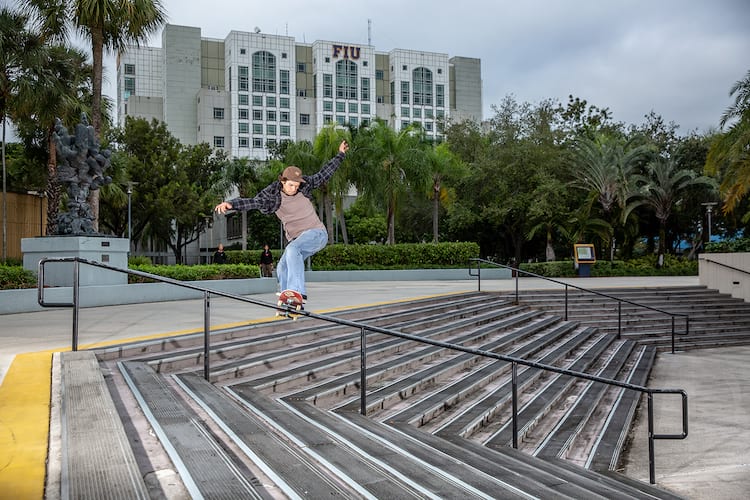 This is one of those spots you roll up to and say, Hmm…Keep it moving? But just a few minutes later, Rick was already on and off a front board through this mammoth of a corner pocket rail, riding away towards some victory pho. 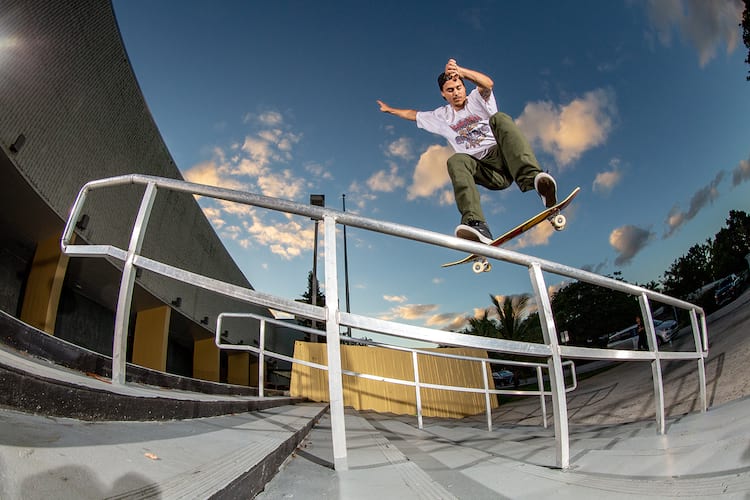 A unanimous “That was the craziest shit I’ve ever seen in real life” rang out from the group when we saw this. Blake handled the switch flip front board with some serious grace. Then it was back to bartending for a celebratory round. 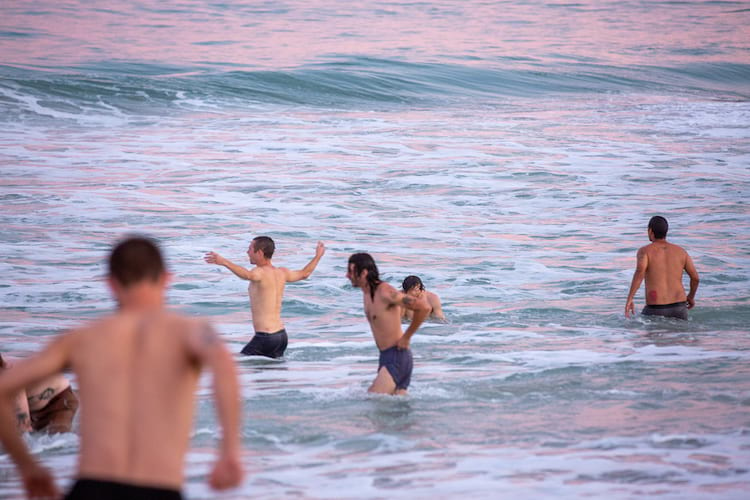 On the last evening of the trip, we were able to make it to the Atlantic Ocean. All of us had opted out of bringing swim suits that day, thinking it’d be impossible to make it there in time. I ran into the ocean in my khakis—went commando—and the rest of the boys hit the chonies. The water was warmer than the air and it was one of the best feelings ever to hit that ocean with the crew after a few weeks of hard work. We shot a few clips of our guy Exeter on the beach and got out of there with two weeks of memories in the books that’ll last forever. As always, thank you, Thrasher Magazine, Tony Vitello, Keith from Plus, all the Florida homies for holding us down and thank you, all, for tuning in. Till next time, we’ll be swimmin’ in ‘er.
© 1981–2023 High Speed Productions, Inc.