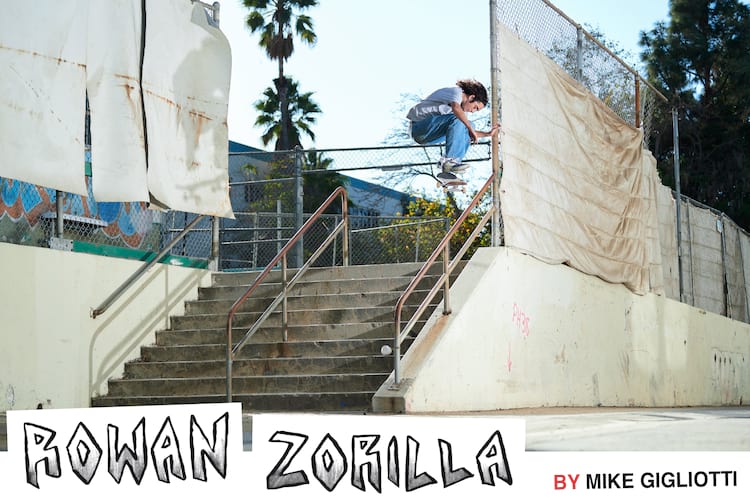 How did getting on Baker happen?

I was just skating with all my friends from San Diego—Shep Dawgs, that style. I was still in high school, just trying to do it whether it was gonna work out or not. Then for a while I had a fantasy—I was like, Oh, $lave. $lave’s from around here, maybe I could get on that company and was kind of thinking about that. That never happened. At the time I was getting Foundation boards but the way I got them was through Taylor Smith. T-Spliff hit me up and was like, “Hey, email this dude Mike Sinclair. He wants to send you boards.” So in my head I was like, Oh yeah, that dude works for Tum Yeto. Sick, I’m gonna get Toy Machine boards. Then I emailed him like, “Hey, what’s up? Taylor told me to email you to maybe get some boards.” Then the first box showed up and it was Foundation boards and I was like, Well yeah, that’s cool. It’s my first free thing I’ve ever got ever, so yeah, sick. Then I ran with that for a while. I would hit them up and try and go on trips but I’d feel like I was just bugging them. I’d be like, “Yo, I need some more boards but maybe next time you guys go on a trip it would be sick if I could tag along.” Then I would get no response and then three boards would show up at my house. So the message went through. I went on one trip and it was to Woodward. So Baker—I guess I was just making videos with those dudes, all my friends from down there—Riley, Kirby, Jacob, all those guys and Riley had just got on Baker maybe a year and a half before. When Riley got on Baker I was like, Dude, we made it! Our whole crew was like, Dude, you’re on fuckin’ Baker! Then Bake and Destroy came out and I went to the premiere with Riley. That’s when the fuckin’ riot happened. So that night I went and was like, Holy shit, this is insane. There’s a riot for this company. This is the sickest shit ever. I had a trick in Riley’s part and I’m through-the-roof ecstatic. Like, Dude, I had a trick in a Baker video. That’s insane. Then we drive back to SD, wake up the next day at Riley’s house and he’s like, “Hey, I just got a text from Reynolds. He wants to know if you want to skate Baker boards.” I was like, “Yeah, duh.” I called Sinclair that day and was like, “Yo, I don’t think anything’s going anywhere with this. My only trip was to Woodward. I’m gonna just run with this whether it works out or not. I’m gonna try this out.” Then I got Baker boards for mad long, just kept skating, kept filming and then I think what happened was Vans started taking me around seriously. When that happened Andrew and everyone was like, Oh shit, this isn’t just some kid that we should just flow. Vans is taking this kid seriously. Maybe we should give him a shot. Then I met everyone and it kind of just happened straight from there. 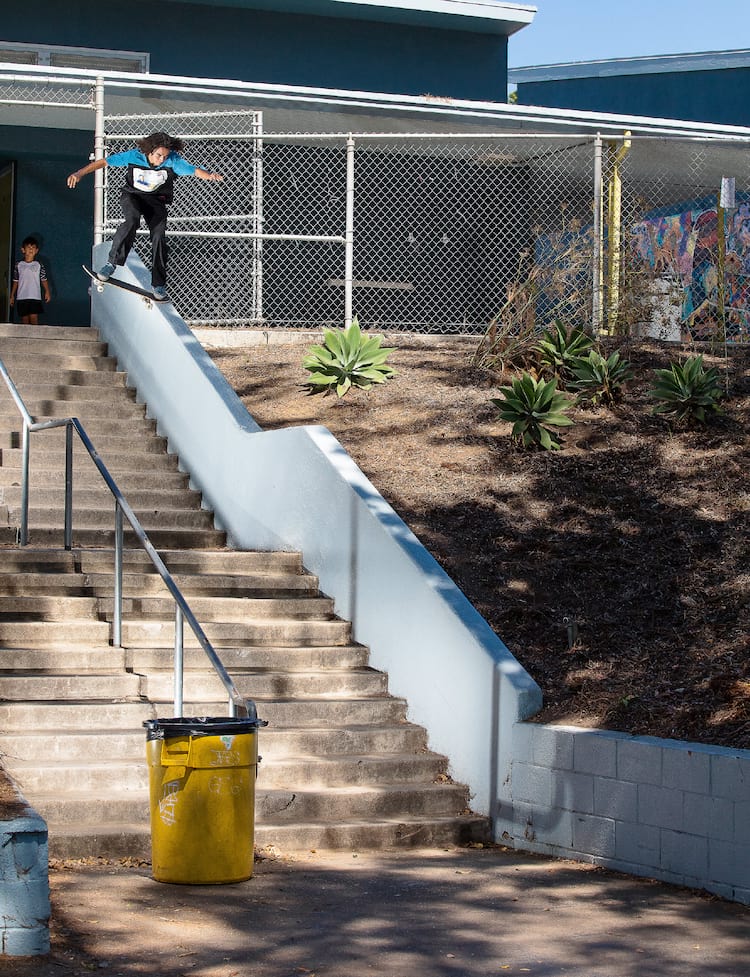 Rowan Zorilla kicks it off with a sketchy switch noseslide through the kink. Can’t wait to see how he got out of this one     Photo: Atiba

What it means to me is exactly why I’ve been trying as hard as I have for this video. ’Cause I’m like, When’s my next shot to be in a Baker video, when I’m fuckin’ 40? If another one doesn’t come out for 15 years from now I’ll be 40. I hope everyone’s stoked on everything that I put out. I don’t know if it’s the best footage I’ve ever put out but it’s the hardest I’ve ever worked and focused on a video. I’m proud of that in itself.

RoZo floats it back to the Summer of ’93 with a sailin’ pressure flip     Sequence: Karpinski

So there’s all this going on, a big Baker video coming out, but at the same time even since the idea came up there was a Vans video, a bunch of other projects you worked on including the Supreme video. And I just watched the footage from another Supreme thing, the Candyland one with all the SF stuff. Did you feel pressure? Was this something that was mellow or is the crunch time that’s happening now kind of hectic?

Well the Vans thing—not that I’m old now, but I was still so young. I was in high school maybe six months before the first trip I went on with Vans. After that I was just like, Dude, I’m not in a fucking classroom. I’m out in the world skating. This is the most insane thing ever. So that was really easy. Well, not easy—there’s definitely tricks I battled in that video, but I didn’t feel like I had to buckle down and focus because it was just like I got fuckin’ let out of the floodgates. I was just like, Oh my God, I’m going on all these trips. I can just skate all day. Before that I was skating spots where I lived. Going to somewhere across the fuckin’ state or across the country or across the world, I’m like, Oh, sick. This thing’s perfect. This is a sick ass-spot. So that came really naturally and I’d like to think most of my skating does, but the Supreme thing, you could only really film with a couple people. You could only film with Bill mainly or Johnny or Logan, ’cause it’s gotta look that way. So then it would be like, Oh, Johnny’s in town for two weeks. I’ll just focus on this for two weeks. But this Baker thing, I’ve never just sat and had plans for a week ahead of what I’m gonna do to get ready to try this, you know what I mean? Also, I’ve never got this much footage in LA before. I guess the Supreme thing there was some footage in LA but for the most part I do best on trips. But this video, probably over 50 percent, maybe like 60 percent is here. Getting tricks at home has always been a struggle for me but I’ve been buckling down.

Is it easier to get tricks on a trip just because there is pressure? Like, if you’re in LA and you’re chilling with Aidan is it easier to not be motivated to go out?

Yeah, it’s that and plenty of other things. But on a trip I feel like the main reason is because it’s like, okay, I’m skating all day. If I’m not skating what am I doing? Sitting? I think the most important thing or the biggest motivator is when you’re on a trip, if you see something you like or think you wanna skate you can’t just be like, Oh, sick spot. I’ll come back in fuckin’ four months and try it. You’re like, Okay cool, I’m gonna be in another town tomorrow. If I want to get at it I got to get at it today. It’s easy here, you know? I’ve got stuff in LA that I’ve claimed fuckin’ years ago that I’m like, Ah, I’m gonna do that one day. But it’s pretty easy to be like, Oh, not today. When you’re on a trip and you’re at the spot it’s fuckin’ fight or flight. 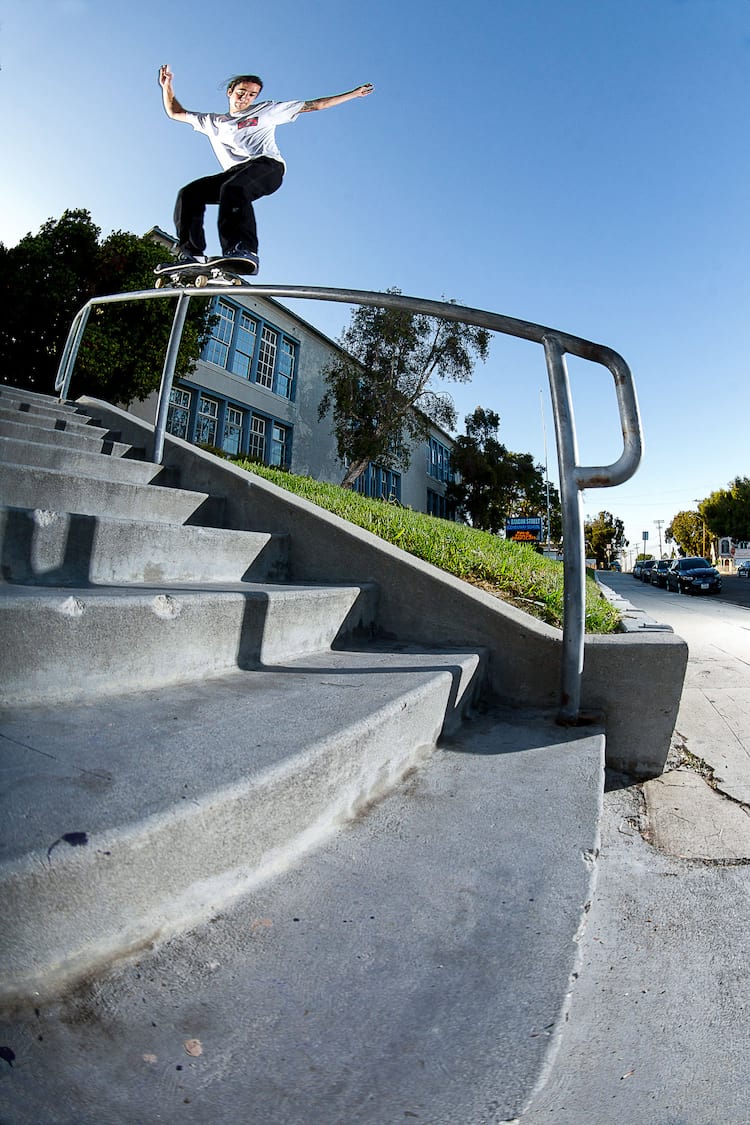 Do you have a roommate when you travel? Certain people have one person they always room with on trips. Have you ever roomed with Kader?

I haven’t roomed with Kader yet, but I also haven’t been on a trip with him since he’s become a stoner so I don’t know. On Vans trips me and Elijah room together a lot. Supreme trips I room with Aidan. I’m down to room with whoever. I went on Tyshawn’s SOTY trip and I roomed with Atiba for, like, 20 days straight. It was awesome. Twice my age or whatever, but yeah. 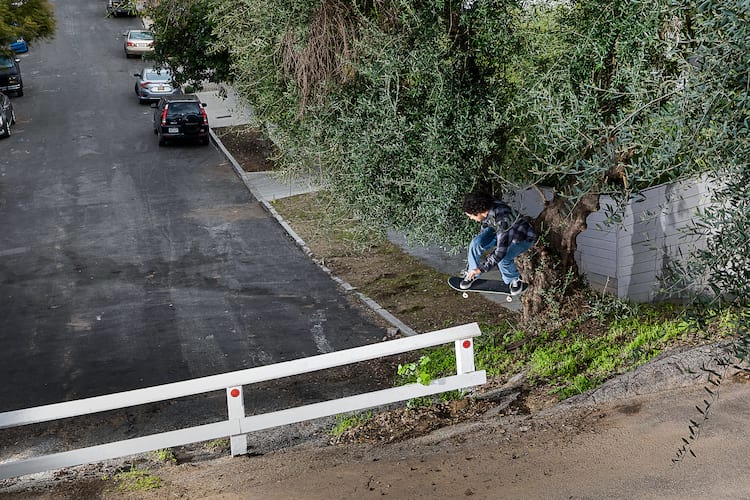 I think—again I’m not old, but with my age progressing the way it is—which I guess it won’t ever stop—I have maybe tried to slow it down day by day. Like, I’m not gonna drink four beers and then try a trick every day. Maybe on a trip you’ll have some beers just ’cause you’re on a fuckin’ trip. But the only time I stopped drinking completely was when I had a heel bruise that lasted two months. That’s the main time when I’m like, Okay, chill out, be as healthy as you possibly can be because you gotta fuckin’ heal. But also, if I don’t drink for a while and then get a trick, like, that night if I wanna have some drinks to be like, Cool, I deserve this because I got a trick that I’ve been stressing about and losing sleep over then yeah, I feel like that helps almost. 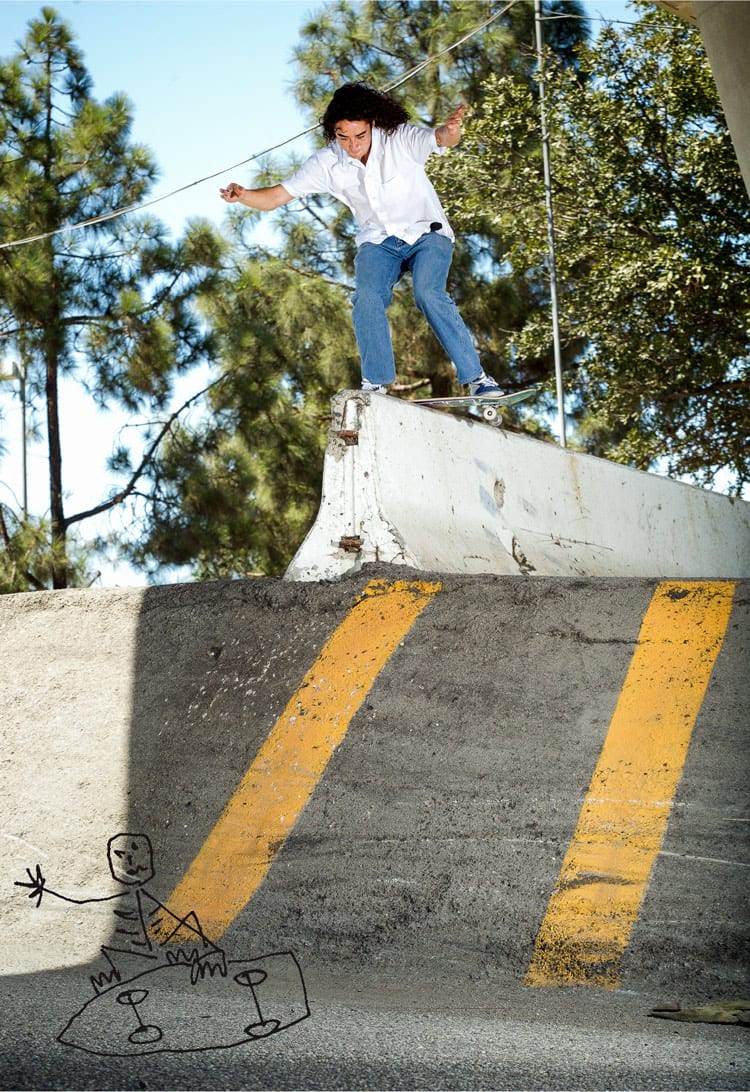 There are dudes who have been on Baker for a long time, since the beginning—people like Reynolds and Spanky, then there’s Jacopo, Zach, new people. Is there one person in particular or one part that you’re most excited about?

Dude, I’ve been hanging out with Andrew so much and I’ve seen a lot of the video so I guess there’s not too much that I’m—I mean, I’m excited for everything, but there’s not too much where I’m like, I can’t wait to see this ’cause I’ve seen a lot. But I am really fuckin’ excited to see the fuckin’ crowd when Sammy’s part comes on. The way Andrew’s got it right now, and it might change, it might not, but what I’ve seen and what I expect from it, I don’t think you even have to be a skater to watch Sammy’s part and be like, Wow, dude, this dude is a fuckin’ cool-ass dude.

Did he hit his nose this time?! Magical nollie 360 kickflip down the fastest double set on Earth     Sequence: Bram