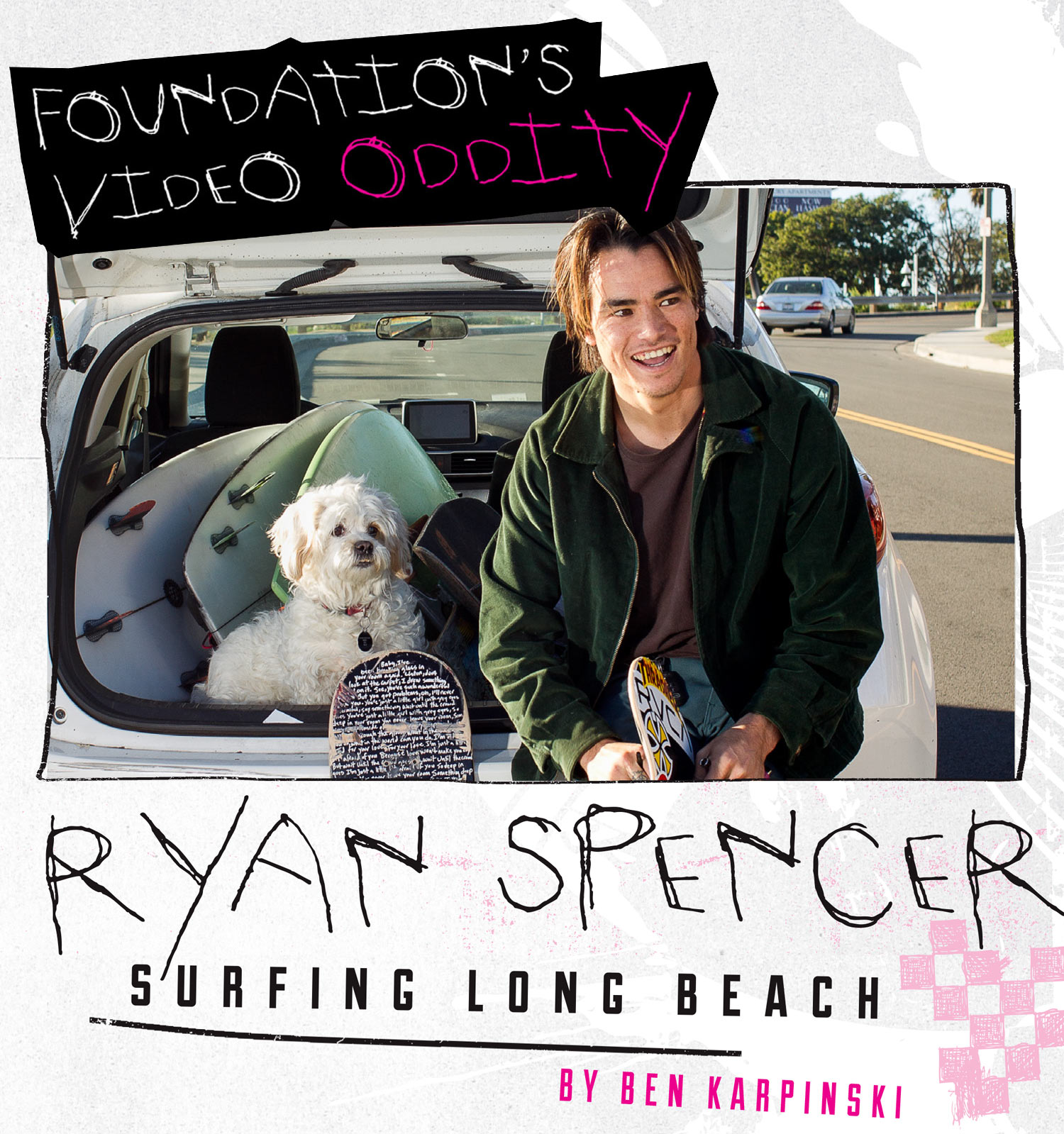 Last time we caught up with you was around the Dekline video. Obviously there have been a lot of big changes. Can you bring us up to speed?
Well, obviously Dekline went out of business so that was a pretty big bummer for everyone involved. We started filming for this video right after True Blue and since a lot of the Foundation guys rode for Dekline it seemed like a little speed bump at the beginning of this video when all of that was going down. I think once everyone got past that it was pretty cool, though, because it made everyone tighter and seemed like a reminder to all of us of why we really do this and that it really is all about just having fun and going skating with your friends.

Has your approach to filming for Oddity been any different than then Dekline video or even your WTF part?
It’s been a little harder to film without going on so many trips like the last two videos, but at the same time it is sort of freeing. This team skates a lot of handrails and it is not like I don’t like rails or won’t skate them, but sometimes it feels like I had to put myself in a really weird mental state to jump down some of the stuff those guys skate. Like, just almost wanting to eat shit. Sort of a self-loathing thing. So that gets to be real draining when you are doing that for a few years straight. So I’ve sort of had a head change and have just been skating how I want to skate and have been enjoying the freedom a bit. There are definitely more ways to push yourself on a skateboard than just adding a few more stairs to each video part. 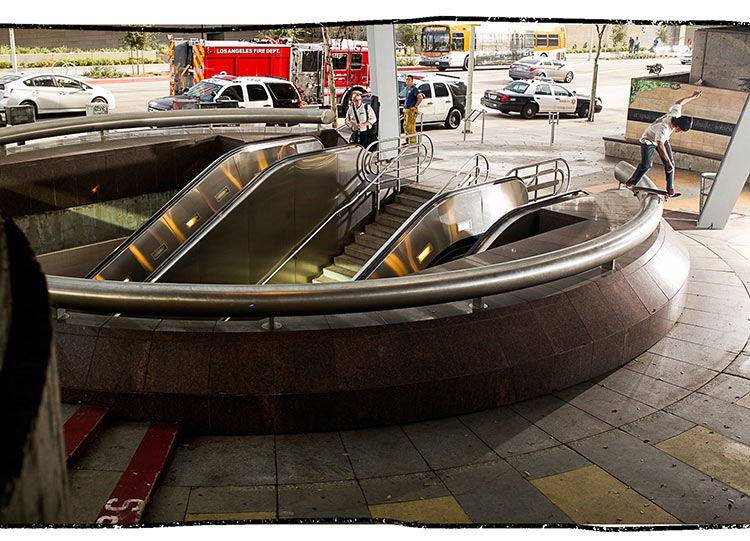 Enjoying the freedom of a front board popover, no stair count necessary     Photo: Karpinski

I know you have been juggling a lot of odd jobs while filming this part. What have you been doing to make money?
When everything went down with Dekline I was stressing out over how I was going to pay my rent and a buddy of mine hooked it up with a job being a valet. It was cool because it wasn’t a set schedule and I would just get thrown into a group text asking if I wanted to work whenever events would pop up, so it still made it easy to go skate. But it was a pretty shitty job as far as just standing around all night and hoping that a person leaves you a few bucks for just bringing their car across the street. That job didn’t last too long, though, so after that I started relying on my photography degree a little bit and have been assisting at my friend’s studio or shooting little jobs here and there for different companies. I was also a surf instructor for a bit but that ended once summer was over.

Working in a photo studio, do you ever roll your eyes or second guess any skate photographers’ lighting choices while they are shooting you?
Not really. I am more worried about trying the trick than worried about what they are doing. I do have a funny story, though. I will leave the photographer’s name out, but one time we were on a trip and Don was filming fisheye and the photographer was complaining about him being in the shot, so I told him to just shoot it on a tripod and to take a photo for a plate—which is a common thing I have seen photographers do—but for some reason this photographer didn’t know how to use Photoshop and I had to talk him though it and then edit Don out of the photo myself that night in the hotel. It all worked, though, and the photo wound up being a Foundation ad a month later.

I saw the David Bowie tribute board you made recently and had to ask if you had anything to do with naming the video Oddity and if that was David Bowie related as well?
No, I’m not sure who thought of Oddity. I think it is just a rad coincidence. It’s kind of funny because I just wrote those lyrics on my board listening to his Low album after he had passed away and wound up posting a photo of my board on Insta and Sinclair went ahead and copied it for a board, so I had no clue that it was coming out. 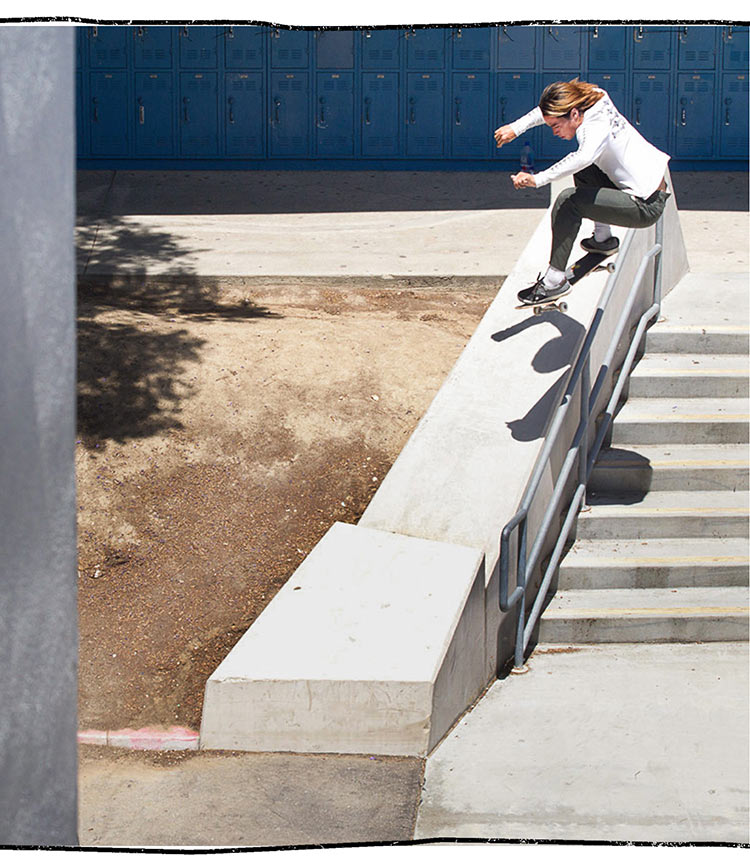 Sinclair can be sneaky like that. I have noticed between you and Cole Wilson there seems to always be at least one lap dog on your guys’ sesh.
The dogs love it, though, when we bring them into schoolyards. They get to run around off the leash and they are having a great ol’ time.

They are a lot easier to get over a fence than a pit bull as well.
Oh, totally.

I’ve looked over and caught you watching surf videos in the car on numerous occasions while we are out skating. What do you think you watch more of these days, surfing or skating?
I watch both but I think with skating and especially trying to skate at a professional level the past few years I have flooded my brain with so much crazy skateboarding footage on a daily basis that at this point it might be doing more harm than good. I always just felt obligated to watch every little thing that came out, even knowing going into it if it would be something I wouldn’t be into. I still watch a lot of skate videos but I am just a little pickier lately.

Be honest: what is the first website you check in the morning?
Well, to be honest neither skating or surfing. It’s probably Instagram but I still check the Thrasher site every morning. Stab magazine and the surf report are always in a constant rotation as well.

How long have you been surfing?
Well, I was born and raised in Hawaii so I was getting pushed into waves by my dad as soon as I was old enough to go to the beach.

You ever catch any other skaters out in the water?
Chad Tim Tim and I surf a lot together. Tom K comes out quite a bit. I have seen Danny Montoya out there before too. 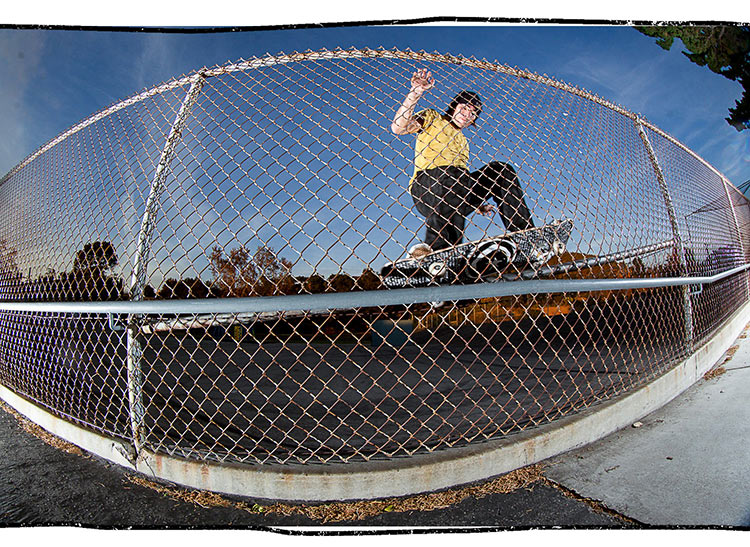 Skate Patrol Report: Winds are light and southerly for some blacktop bank breaks. Fence coping in the region is hitting thigh/waist high and the switch 50-50s are firing. Overall the skating is looking great     Photo: Karpinski

Do you think Long Beach should knock out the break wall to get waves at our beaches?
That would be pretty cool but I don’t think we would be able to afford to live here anymore because rent would go up too much so I am fine with driving to Huntington.

I once saw a bumper sticker that said “Long Beach: No waves, No kooks.”
That is true. The kooks would come in and take over.

How often do you go back to Hawaii?
Usually just once a year for the holidays but this year I actually went a few times. My grandpa passed away earlier this year so I went back to spend time with my family and then I also went back to surprise my girlfriend and ask her to marry me.

Safely out of the kook zone with a kickflip front board to fakie on a concrete break     Photo: Karpinski

That’s huge! Congratulations. How long have you two been together?
Thank you. We are going on 11 years so it has been a while now. She has always been my best friend growing up so the years really flew by. It has been really cool to spend over a decade with someone and to watch each other grow as people but still have the constant reminder of who you were, who you are and who you want to become.

How did you and Sandi wind up posing nude for Deanna Templeton’s new swimming-pool book?
She just asked us if we’d be down to swim for her for her book. She explained the concept to us and we both thought it was rad so we were down.

You have been making some zines and photo books yourself, right?
Yeah, I came out with my zine Living in a Loophole a few months ago. The whole zine was all film photos from the past couple years of traveling and having fun and getting into weird situations with all of my friends skateboarding. I think it will be cool for all of us in the zine to look back on it one day. 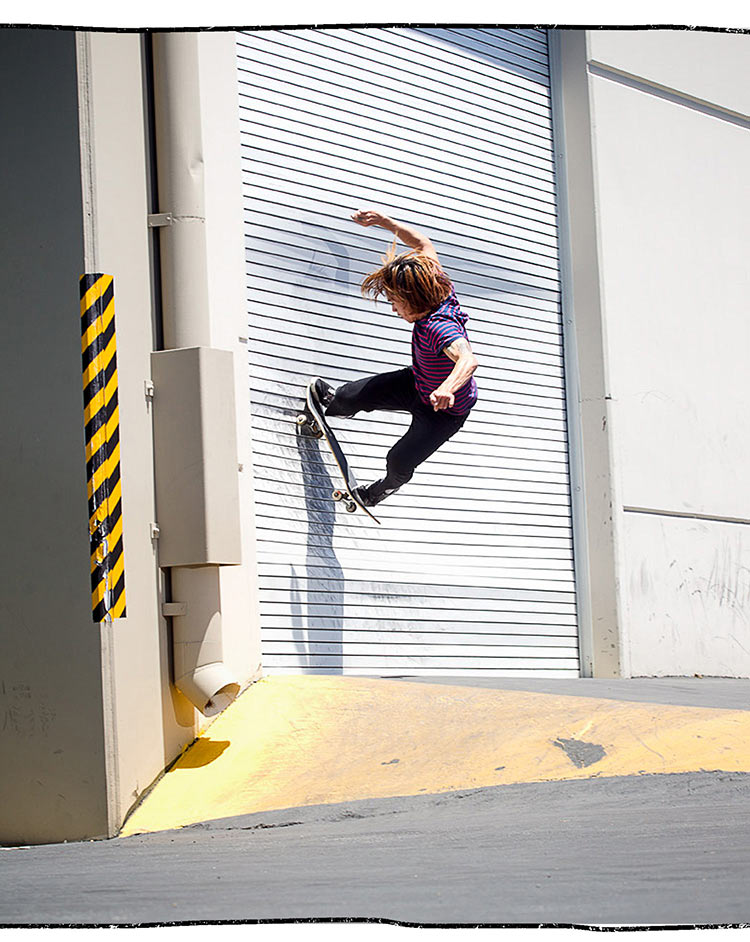 It's definitely gonna be cool to look back on this 270 to wall crawl someday. Actually, it's pretty badass to look at it right now. Some stoke is timeless     Photo: Karpinski

Have you still been making your photo journals?
I kind of slowed down a bit when I was working on the zine but I just bought a printer because I found out it was cheaper to just buy a printer and make our own wedding invitations then it was just to buy invitations so I am excited to start using that for the journal and just print photos and glue them right in.

So what does 2017 have in store for Ryan Spencer?
Unknown at this point. We got the premiere in February then I’m sure it will be business as usual. Wake up early, go surf then meet up with the bros and see where we are skating. Well, that and getting married.