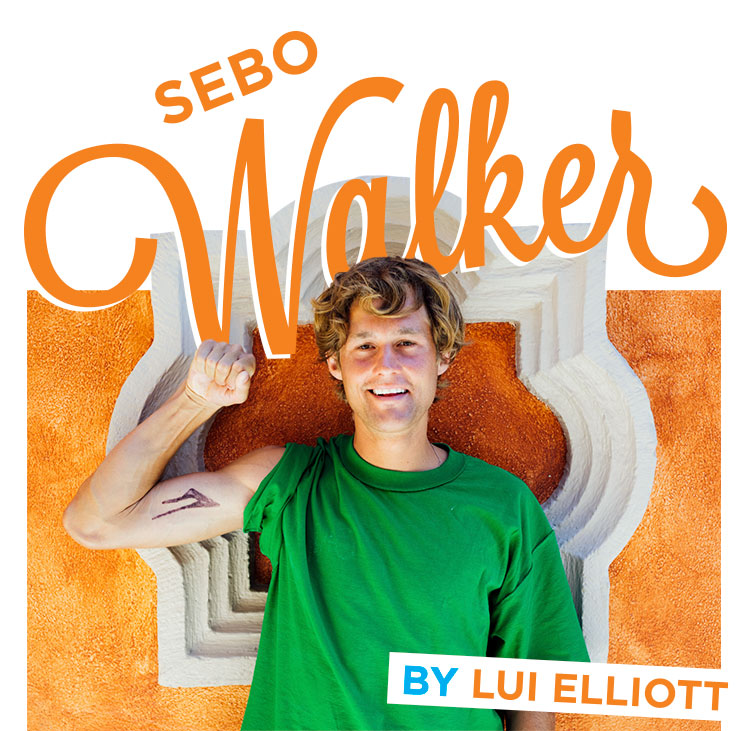 What’s up, Sebo? What are you doing right now?

Just walking back from a coffee shop. I usually start the morning painting. I got back to LA from the East Coast yesterday, so I’m just chillin’.

Is Sebo short for Sebastian?
Yessir.

Why do you go by Sebo?
I’ve been getting Sebo my whole life. I think it was a nickname that my parents gave me and it just stuck. Every year that passed, more people just knew me as that. I’m pretty sure a lot of people don’t know my real name is Sebastian, but at what point do you change to your real name after you’ve had a nickname for the past 25 years? Close friends will call me by Sebastian but Sebo just stuck. 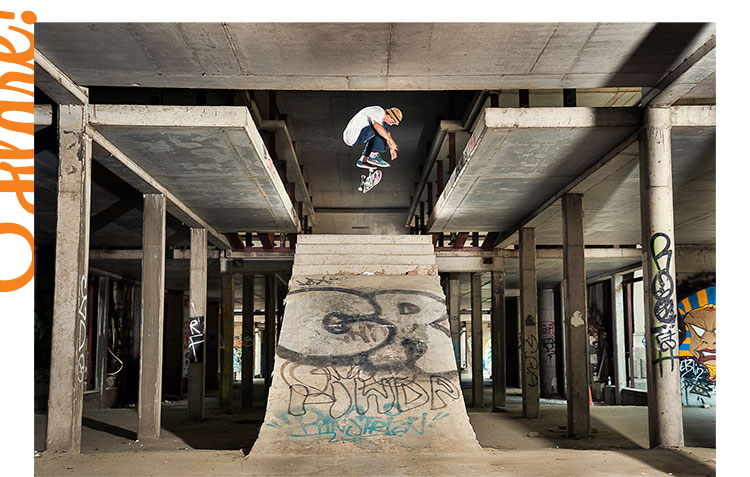 Get outta the van and into the dungeon! Sebo, second-story nollie flip Photo: Muller

How’s the van life? Are you still in it?

No, I’m not. I'd still like to have the van because it was nice to not pay rent, but it was just really old. I lived in it for four years. It was a 1994 Chrysler Town & Country, so it has seen its days. I kept putting money into it and it started to be no longer worth it. Problem after problem came up and I was traveling as well in between, so it would just sit. With cars that are really old, things just happen—anything from the battery being dead or the tire being flat. At some point I told myself that if I turned pro I would allow myself to get a place. Things worked out and my fiancé moved here, so we share a studio over in Venice now. I do miss the freedom of living in a van, though.

Do you still have it?

I don’t. I donated it a couple months ago to a breast cancer charity. They picked it up, took it apart and sold all of the parts in an auction. It seemed like the right thing to do. I couldn’t sell it; it was just sitting here taking up space. 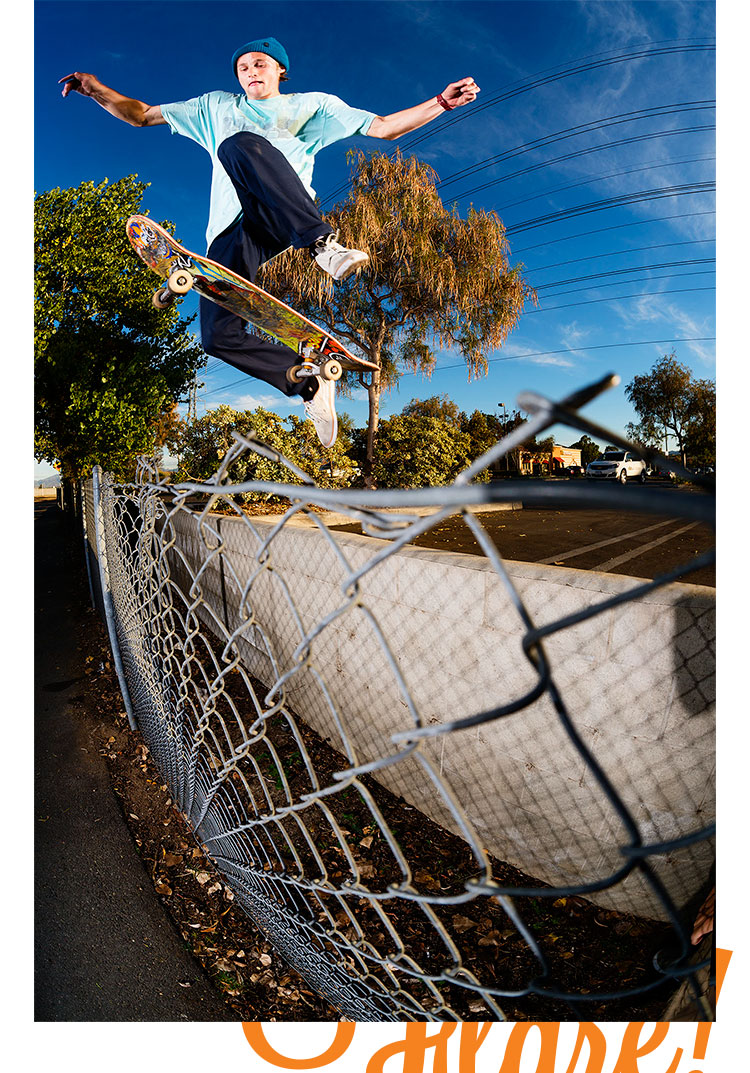 The no comply double flip needs a good nickname. How about the Blastin' Sebastian?

How long have you been pro?

It’s been a little over a year and a half. I turned pro January 7, 2016. I turned pro in a bowling alley. It was a dream come true to go pro for Krooked.

And how did you get on Lakai?

I used to get shoes from a rep through the shop I rode for in Oregon, Exit Real World. I took a ride to California about ten years ago with just a backpack, putting off going to college to chase the dream. When I was down here, I was running out of shoes and I didn’t have very much money. I was just roughing it, trying to make it happen. I remembered trying to get those promo shoes and making the connection. I’m pretty sure it was this girl named Anne that worked at Podium that I got in contact with and told her my situation. They thought it was cool that I made the effort to come down here and make something happen, so they started sending me shoes directly. Federico happened to be the TM at the time and he started hooking me up. Him and Roger Bagley were trying to get me out with the crew. They really looked out for me.

So how does it feel to be one of the older veterans now?
It’s funny—all of a sudden a bunch of time has passed. I had to sacrifice a lot and close a bunch of doors, like going to college. I just hope I can be a positive influence on the new guys.

When you're on the road, are you in the party van or the chill van?

I’m usually in the chill van because a lot of time on trips, there’s sessions I really want to be on point for. I’m hard on myself if I’m not filming or being productive. I’m all about getting the trick, then celebrating afterwards. I’ve been in both vans and I’m not super particular about either, but I’m mostly in the mellow one.

Who's your road dog?

It’s changed a lot over time because the Lakai team has changed quite a bit. But it bounces around. I used to room with Daniel Espinoza or Jon Sciano quite a bit. I’ve roomed with Carroll a couple times. It just depends on the trip. Some people are in more of a party mode and others are in a go-to-bed-early mode. Everyone is on a similar page so you know where you’re going to be. But I always try to room with somebody different. That way you get to know your teammates better.

You had a full part in Lakai’s The Flare. How long did you film for it?
For a long time: three-and-a-half years. There was a lot of changes with the team, so it took a bit longer than we hoped for. At the same time, we’re happy with it; it came out pretty solid.

Is this your first part in a major video?
I guess for a major video. I’ve had something like 15 video parts, but most of them were before the Internet age. It wasn’t like nowadays where a part comes out immediately.

When they sat everyone down and informed you guys that they were making a video, were you stressing?
No, I was super stoked. 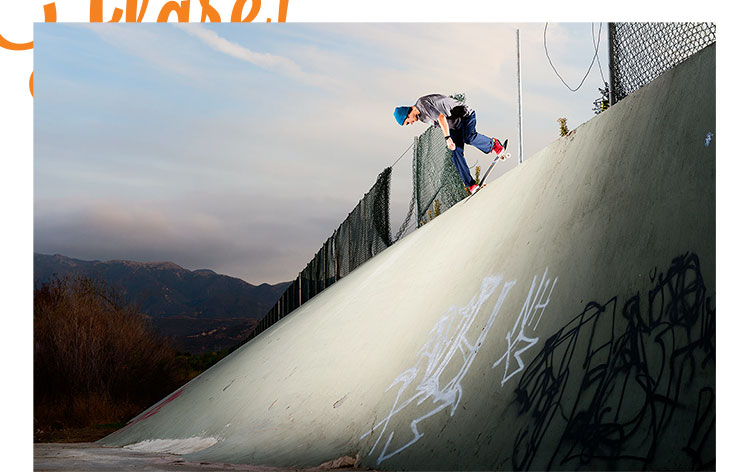 It ain't Firestone but still looks pretty tough. Backside noseblunt with a view

How did you approach filming for the video?

I always come up with a list of tricks and spots. Personally, I like to film in a small chunk of time so it feels fresh. I felt a lot of my part was old and I could do better, but everyone is their own worst critic. But again, I’m still really happy with how it came out.

Did they designate who was and wasn’t getting full parts or did you automatically get one if you filmed enough?
They told us they were making a video, so after a while they checked back to see how much footage we had. They didn’t say who was going to have their own part or share one. it was just based on how much footage you had.

Did you choose your song?
Federico and I were keeping in touch, sending songs to each other. We were listening to a lot of old hip-hop. At some point he was riding his Vespa and De La Soul came on. I wanted something along those lines, and he pictured it. I came over, saw my part with the song and we were collectively stoked on it.

'Sup with the redneck kit in a few of the clips, the bandana and speedies?
The first clip was a couple years ago before the speed shades got popular. We were at a gas station and I tried that kit on. Federico was just laughing super hard and I think he bought it for me. We were at a spot and I was just joking around, wearing that kit. Federico loved it and told me to land a trick and then beam the camera. It was a joke but it was super funny and we put it in the part.

What was the hardest trick for you to land?
The backside noseblunt at Firestone, just 'cause of how hard that spot is to skate. I was coming from the higher side, the tranny was hard to get used to and I was pushing to it. That was a four-or-five-hour battle.

Anything get away from you?
Yeah, a lot. I tried to nollie backside flip the Santa Monica triple set. I landed on it every try, but I would slip out or stick and get bodied to the point where I couldn’t keep going. I walked away from it extremely sore with cut-up hands. I went back seven times trying to get it.

What was your favorite trip filming for the video?
I went on a lot, but my favorite was the Berlin/Poland trip. We had a really good crew, productive days and amazing weather. I'd never been there before and there were tons of unique spots.

What kind of art are you doing these days?
I’ve been doing grip-tape art, which has become really popular these days, with colorful grip and all that. I hand paint all of them. I gotta figure out a better way to mass produce or sell it or something. I enjoy doing it, but it’s a lot of work. If I could come up with ideas and print a ton, that would be pretty cool. I get to connect with a ton of kids. They can tell me exactly what they want. 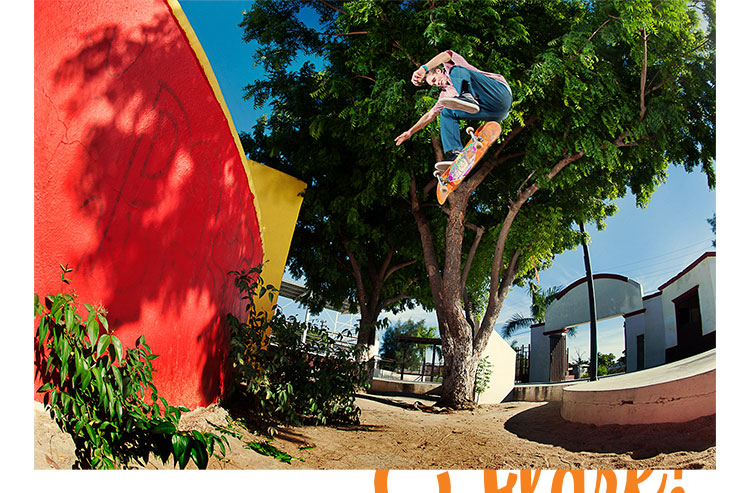 College can wait, but this nollie back heel? Yeah, we're gonna need that now   Photo: Muller

Do you turn a profit from grip art or does it just even out with the cost of materials?

It’s a little bit of both. I think there is profit but I run it through Paypal and it only pays for so much—little things add up here and there. Luckily I get hooked but by Boardstix, which is a paint-pen company and by Mob, who’s been my grip sponsor forever. If it was on a bigger scale I would be able to make a lot more from it, but at the same time, I can directly communicate with kids that request grip. If I go to a random place, someone can tell me, “You did grip for me,” and have this connection outside of skating in terms of art. I don’t really keep track of how much profit I make, though.

What’s next now that the The Flare is done?

I think I’m just going to keep working on stuff with Krooked. It’s getting towards the end of the filming for the Pump on This video with Sk8rats. We’re thinking about putting out a Walker video with Kyle, Dominick, Walker Ryan and myself. We’ve been talking about that one forever, maybe get it in the works. I’d like to try to do more one-minute parts, every month or so. I want to be more productive.