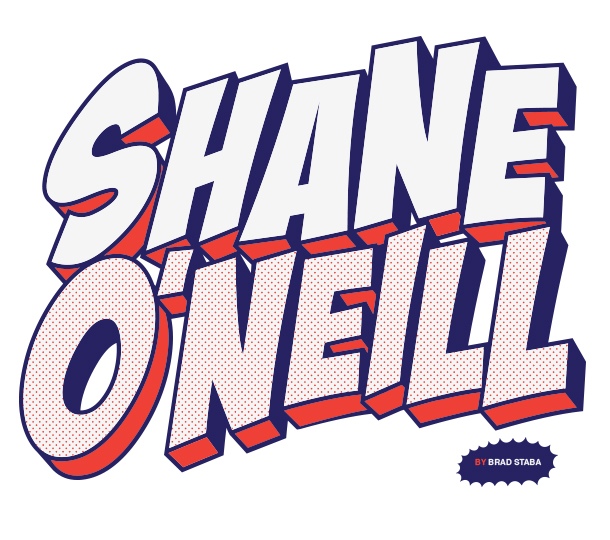 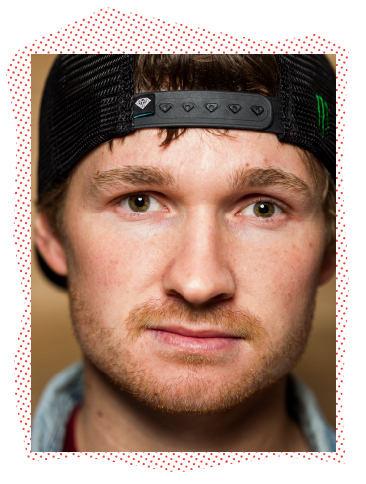 Nugget? Shane?
Brad, what up?

Why weren’t you answering my calls? What the fuck?
I was getting in my car, dude.

Alright, well, you ready to do this interview?
Yeah, let’s do it.

Okay, tell the people what you do during the day, besides skate.
Besides skate?

Yeah, besides skating.
I mean, at the moment all I’m doing is working on my house and getting all the landscaping done. Kinda just working out more to do with life because I haven’t done that shit since I was in Australia. All I’ve been doing is skating every single day for the last fuckin’ five years.

Makes sense.
So I’m just trying to figure out life a little more.

Yep. You’re going to be trying to figure it out for a while, dude. It’s gonna be fun.
Yeah. It’s something else, man.

I personally think it’s pretty amazing that people compare you to a video-game character, because they’re supposed to be able to do anything, right? So to me it seems like a pretty awesome compliment, and I wish they still made skate games so that I could take a photo of you playing yourself for an ad; that’d be pretty good. How do you feel about that? That compliment?
I mean, that’s a pretty good compliment because we all grew up—at least my generation—playing those video games. I don’t think it really relates to anything about me besides—fuckin’ I don’t know.

That you’re fuckin’ good?
I see kids write that about a lot of people. It’s not just like one fucking person. It’s a whole bunch of pro skaters who are somewhat consistent or can be labeled that, I guess.

Yeah. How long you been filming for your part that’s coming out?
I’ve been filming for the part for about a year. As soon as the Nike video finished, I wanted to get straight back into it and I’ve only been filming with Jensen, who’s my friend from Australia. It’s a project for you guys—for Skate Mental—but also for myself. It’s, like, I get to do whatever I want for the video. It’s not like I gotta go on a certain trip to get footage because it’s fucking needed. You’ve just let me do whatever I wanted.

Why all VX?
Because it’s on the Internet and what’s the point of doing it high quality if everyone’s watching it on their little phone anyway? And I personally like the sound and the look of the VX. Also, my friend James is the master at that camera, in my mind. So I thought I would just bring it together. I feel like a lot of kids have a lot to say about it. Like, “I hate VX,” or, “I hate HD.” But I don’t understand why it matters at all. Let’s say Koston’s bringing out a new part—the last thing I’m thinking is, “What the fuck camera is he using?” you know? But I guess that’s how people are these days, so whatever.

So you’ve got twenty minutes of footage and then what? You’re gonna use four minutes or something? Who’s getting the fuckin’ scraps? Where’s the rest of this shit going?
I mean, honestly, it’s all just whatever footage. James films everything and we’ll end up picking some stuff. The main goal, at the moment, is for this part to just have a variety of skating instead of just ledge or stair skating. I just wanted to go on trips to different places and fucking skate different things. I don’t know what people expect—if they’re trying to look for tricks that no one’s ever done or whatever the cool thing is these days—but I’m really just trying to just skate, you know? 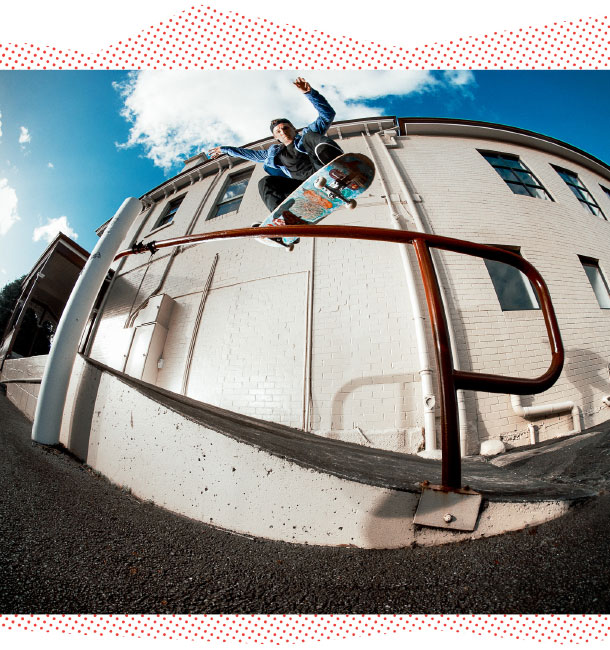 Switch flip front board then mow the lawn. Photo: Morey

What do you miss about Australia?
People there are pretty lazy and the people I’m around here are down to do stuff and get out there—help people and help friends, you know? I’m just trying to live here so I can bring my homies out and hopefully get them into some kind of fuckin’ life plan or some shit. Because I just kind of fell into living here and it’s all working out.

That’s rad.
I miss going home, but when I’m there — it’s fun and we go to bars and skate whatever spots I skated when I was younger, but after a week I’m, like, “Fuck. I want to go do stuff now!” I don’t want to be just sitting there; I’d rather get stuff done.

Do you know how much Aaron Meza likes Tim Tams?
I do. I went on a Fourstar trip with him and he had Tim Tams and Kettle chips with him the whole trip.

Tim Tams are good, huh?
I mean, they’re the best biscuits you can ever have, yeah.

What about this idea, dude: you’ve got to set up two boards for Street League, right? What if you set up one of your boards with the trucks on backwards so if someone breaks a board and asks if they can use yours, you give them the one with backwards trucks so they can’t land shit. You’re gonna do that next time, right?
So you mean if Nyjah asks me for my board next time I’ll give him one that doesn’t work? Is that what you’re trying to say?

Yeah. Besides skateboarding—obviously skateboarding is the most important thing in your life—but what comes next? Is there anything else you can immediately think of that you connect to as much as skateboarding—or almost as much?
I mean, as far as the connection goes, no. Because at this point in my life all I’m doing is skating and helping my family back home in Australia. I have quite the different family situation, I guess you would call it, but I just keep that personal, you know what I mean?

Yeah.
I keep shit to myself. You know that.

Yep, I know.
I don’t need to be some outspoken pro skater that has to fuckin’ act cool and say certain things to make people laugh just to keep relevant. I’m just trying to skate and that’s it.


He keeps his personal shit to himself but has no problem sharing his switch bigflips with the world. Sequence: Morey

Personally, I think your skating does most of the talking. So when I think of the word professional skateboarder—as dumb as that sounds—I obviously think about you. Your face pops in my brain. Your fuckin’ face. Should we just end it with your fuckin’ face?
My fuckin’ face? Well, it’s not that I’m going for that — the perfect fucking professional, you know what I mean? It’s nothing like that. I feel like the funny thing in my situation is, I’ll hear that people are commenting, like, “You’re fucking too robotic,” or, “Why are you wearing that?” If those are the kind of things that I have to get hated on for, then …

That’s awesome.
My job is done. If you don’t have anything to say about the skating, then I don’t really care what you have to say, you know what I mean?

Yeah, I know what you mean. I think it’s cool, you know. I don’t think it’s bad to be a professional. What people don’t understand is that it’s fun and stuff, but it’s also a job—and obviously how people survive and set themselves up for their lives. I think it’s good. You just skate and then everything else just kind of falls  in place.
Yeah. I don’t really think of it as a job so much or feel like the professionalism has to be a certain thing. But I’m not gonna go around being some oddball and fucking ruining relationships just trying to be cool, because at the end of the day I have a whole family that I have to support in Australia. Again, I’m not really speaking on my situation because I don’t give a fuck what people know, but I don’t have a rich family to where whatever I do doesn’t matter. I have to have a job, you know what I mean? Like, I have to support people and I can’t just be acting like a fucking idiot just so I can seem cooler to people.


Skipping the vodka, Shane knocks back a biggie back lip fakie, straight up. Sequence: Morey

I grew up the same way. I didn’t come from a super-awesome, rich family. It was always a hustle, so it’s definitely good for people to know that.
What I meant by that was that I don’t have a family to fall back on. I have to just do what I can. I don’t want to be that dude that’s in every single photo drinking shots of vodka or acting like an idiot. Well, not even acting like an idiot, just acting more crazy and drunk and doing whatever. I don’t need to do that to ruin things with sponsors. I’m just trying to skate and help my family and help my friends and fuckin’—you know. You get it; you do the same thing. You do what Brad wants to do and it works. Who cares about whatever?

But then I also get fucked up and shit, too. Well, actually I don’t anymore.
People don’t need to see that all the time. You know what I do.

I agree. I don’t think people need to see that. So I’d like to say thanks for riding for my company. Maybe tell people how awesome it is to ride for Skate Mental.
I would think it would seem obvious to people why I ride for Skate Mental— because it’s a skateboard company and we can do whatever we want and you let me do what I need to do and you do what you need to do. It’s not like you’re fuckin’ dragging me out to all this bullshit for no reason just to try and sell a fucking extra T-shirt a month or something, you know? We’re just doing what we gotta do and that’s why I love it. And obviously you make the best graphics and have some crazy mindset which no one else has. 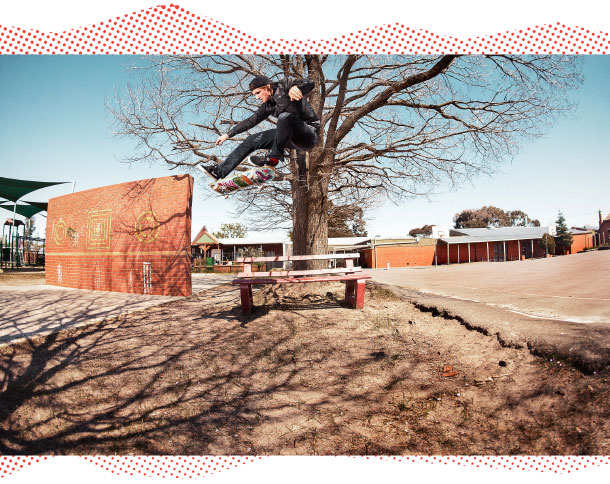 I’m stoked, dude. I think this next year is gonna be a really good year for everybody. I’m super excited about your part coming out, and just, like, new shit you know—just being able to keep doing fun stuff. It’s super exciting. Alright, I’m going to go back to my life. You wanna go back to yours?
Yeah, I’m trying to fucking install a gas line to my barbecue so that I don’t need to get tanks. It’s a bit of a mission.

Oh, it’s just the natural gas, like a gas line, right?
Yeah, but I have to connect it through the front of my house instead of getting tanks of gas every summer.

So do you have to trench it out? Like, cut through concrete and stuff to get there?
No, because my yard is still dirt, so I’m good on that.

You should trench it. I could do that for you. Well, fuck, man. Put a shrimp on the barbie, mate. Stoops.
Alright, man.

Talk to you later, dude.


Back Smith kickflip to nose wheelie. Uzi does it. Sequence: Broach