May 4-6th, 2018, marked the 9th annual Wheels of Fortune skateboarding showcase in Seattle, WA, hosted by Seattle-based non-profit Skate Like a Girl. Skaters from around the globe descended upon the Emerald City to participate in a jam-packed weekend of activities, culminating in a competition at All Together Skatepark, specifically highlighting female-identified, trans and non-binary individuals. Hundreds of rippers and fans showed up to take part in the action on Sunday. The parking lot outside boasted a bazaar of small women-led skate brands such as AllezOop, The Skate Witches, NEFS, and A Positive Seed, as well as everyone’s favorite: hot dogs and ice cream. Inside, the park was packed with what felt like a Ripley’s-Believe-It-or-Not amount of non-dude skaters, solidifying that this event is a far cry from your average contest. Many highlights made WOF 9 special, including an all-female judges panel, multiple impromptu dance parties and the entire crowd singing along to “What’s Up” by 4 Non Blondes. All day long, skaters of all ages and ability levels shredded the course to earn prizes and glory, battling their tricks and the Bikram Yoga-esque temperature of the park. In the end, three international up-and-coming skaters took the top spots: Florida’s Meagan Guy in 3rd, Colombia’s Ana Rendon in 2nd, and Japan’s Nanaka Fujisawa in 1st, with Jenn Soto taking home best trick with a kickflip backlip down the rail. See you next year May 3-5th, 2019! 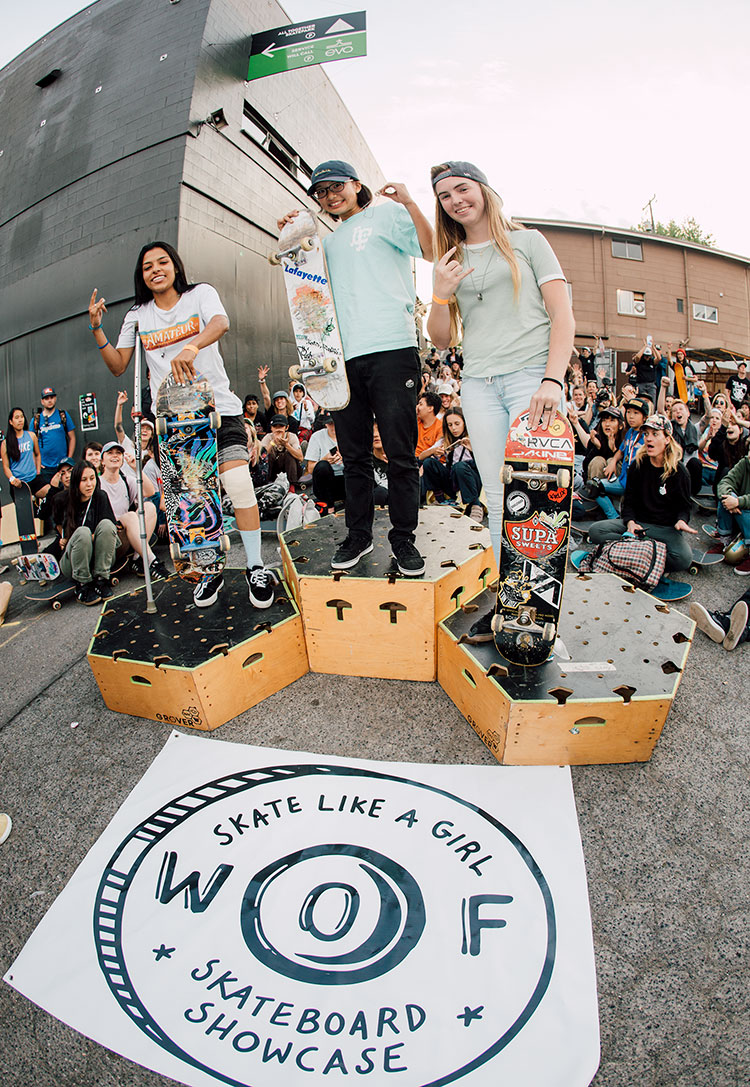 An international trio of up-and-coming rippers rocked their way to the top spots at Wheels of Fortune 9: Florida’s Meagan Guy in 3rd, Colombia’s Ana Rendon in 2nd, and Japan’s Nanaka Fujisawa in 1st Photo: Zorah Olivia 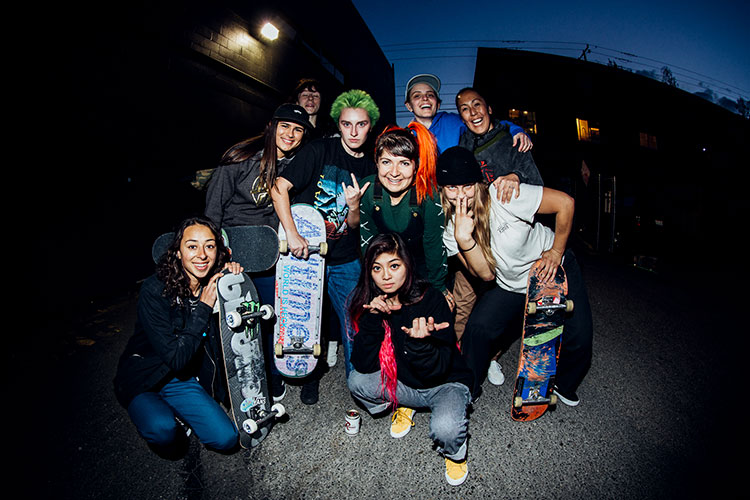 The inclusive vibe of Wheels of Fortune brought together mall grabbers, rockers and nosepickers alike. Solidarity is the new black Photo: Ollie Gagnon 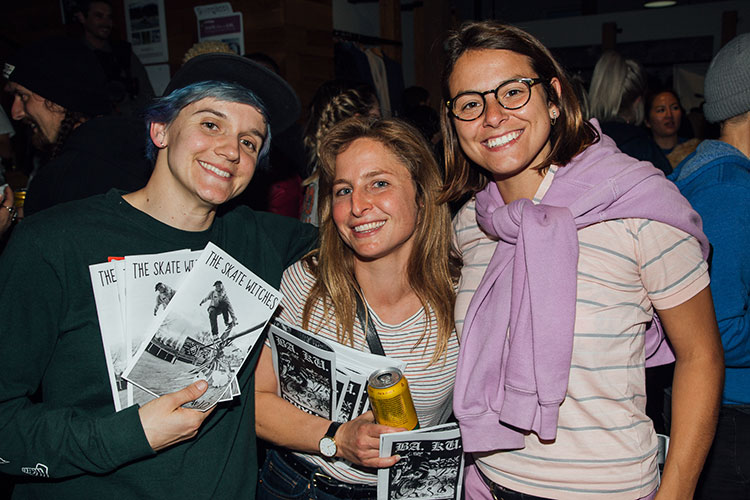 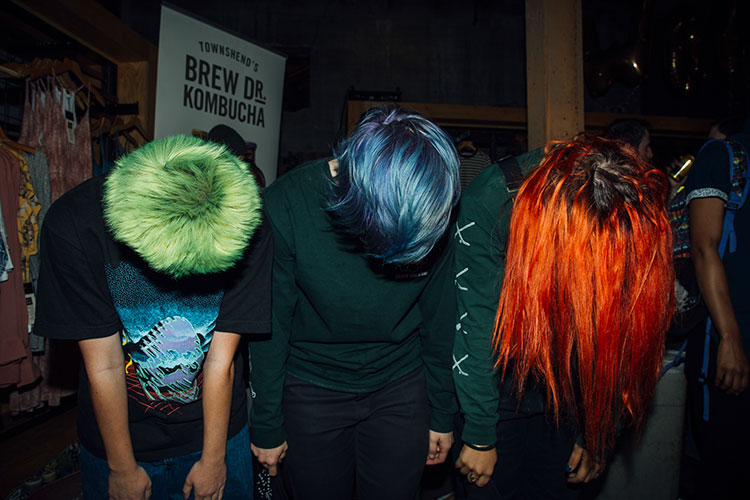 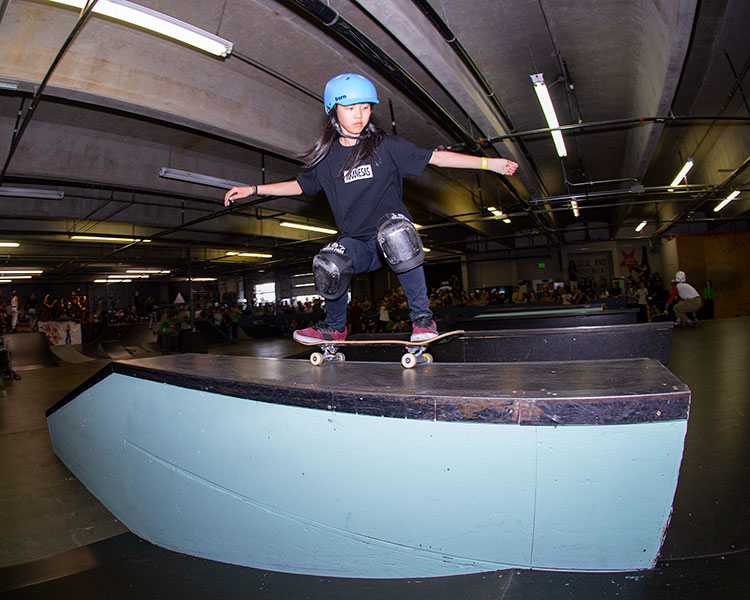 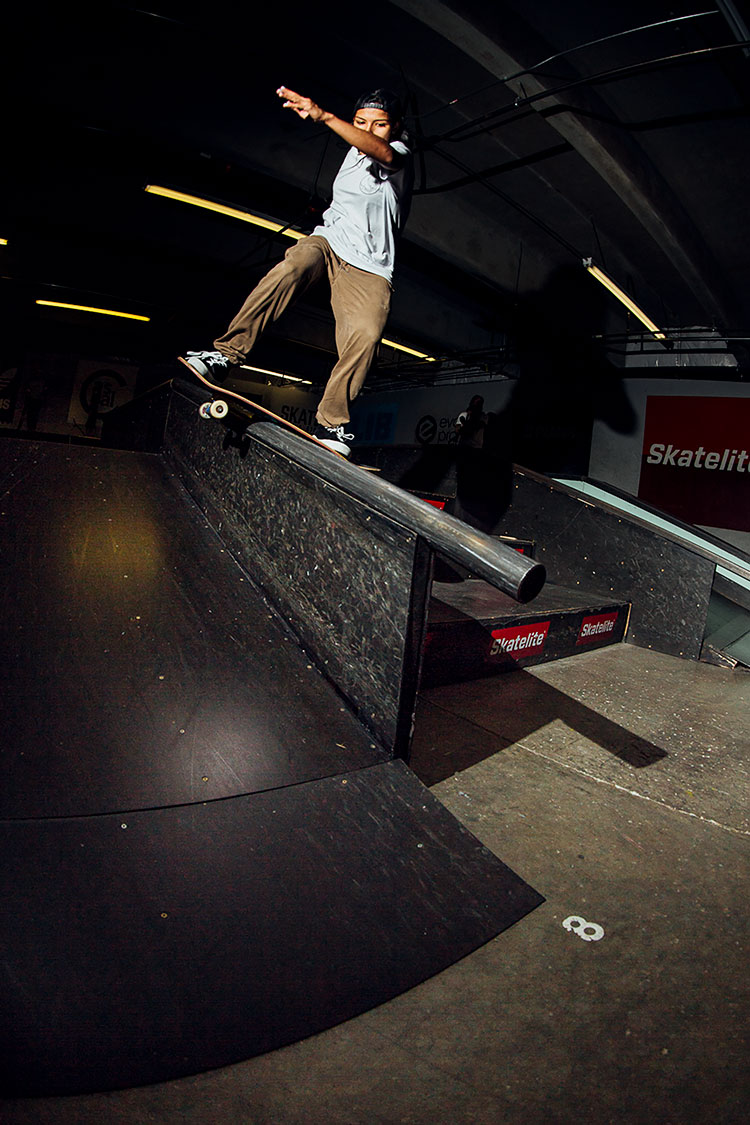 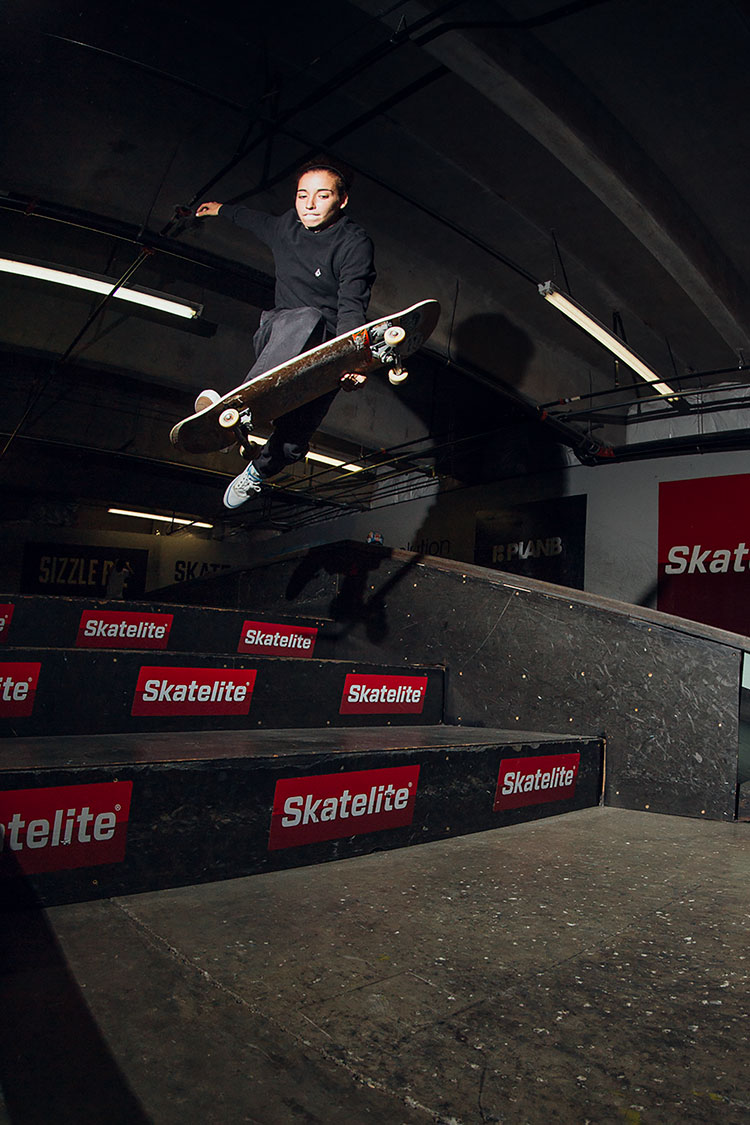 Florida is home to some incredible skateboarders: Elissa Steamer, Fabiana Delfino and Sam Narvaez to name a few. Miami’s Clara Solar kept the legacy alive with boosted beanplants like these! Photo: Norma Ibarra 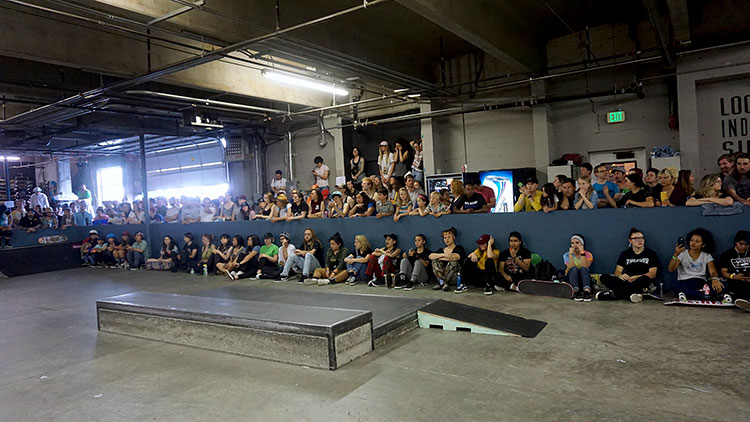 A full house on Sunday, May 6th kept the skaters pumped, and also brought the room to hot yoga temperatures Photo: Olga Aguilar 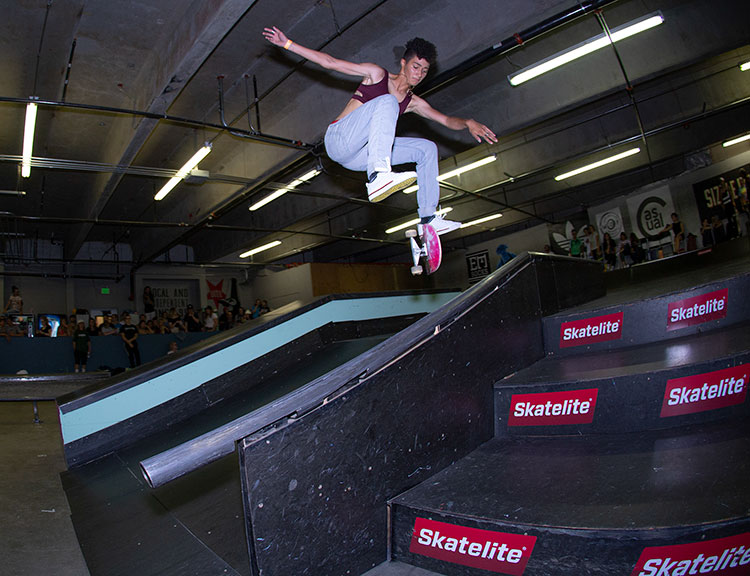 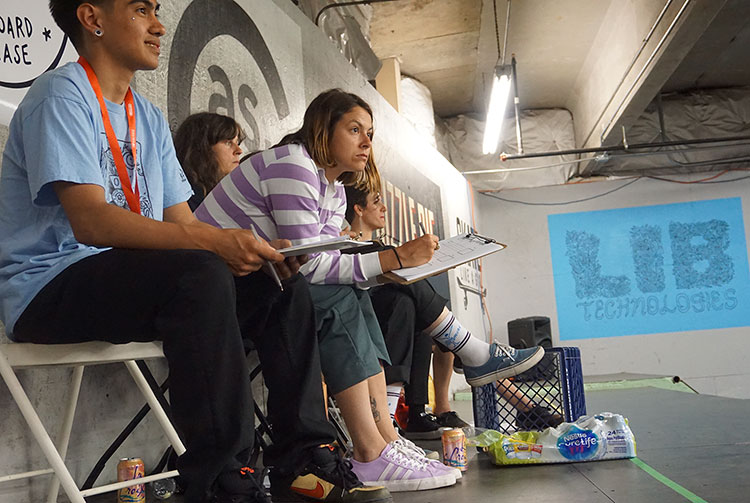 Nora, focused on judging the rippers of Wheels of Fortune 9 Photo: Olga Aguilar 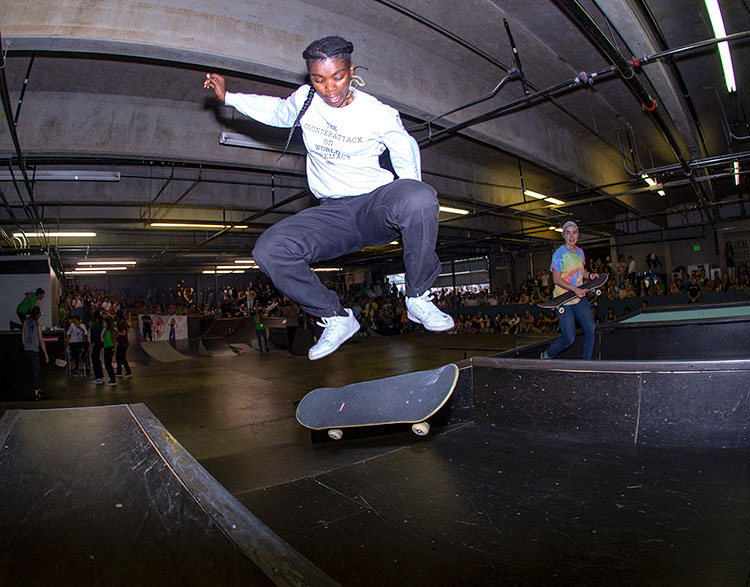 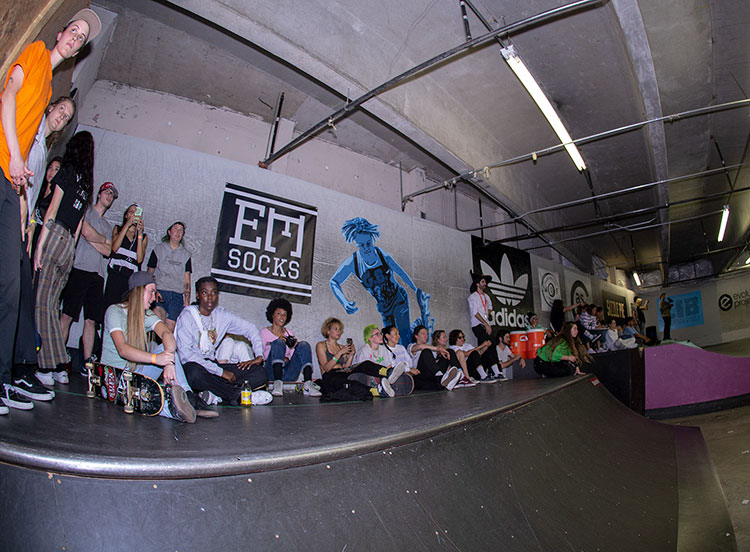 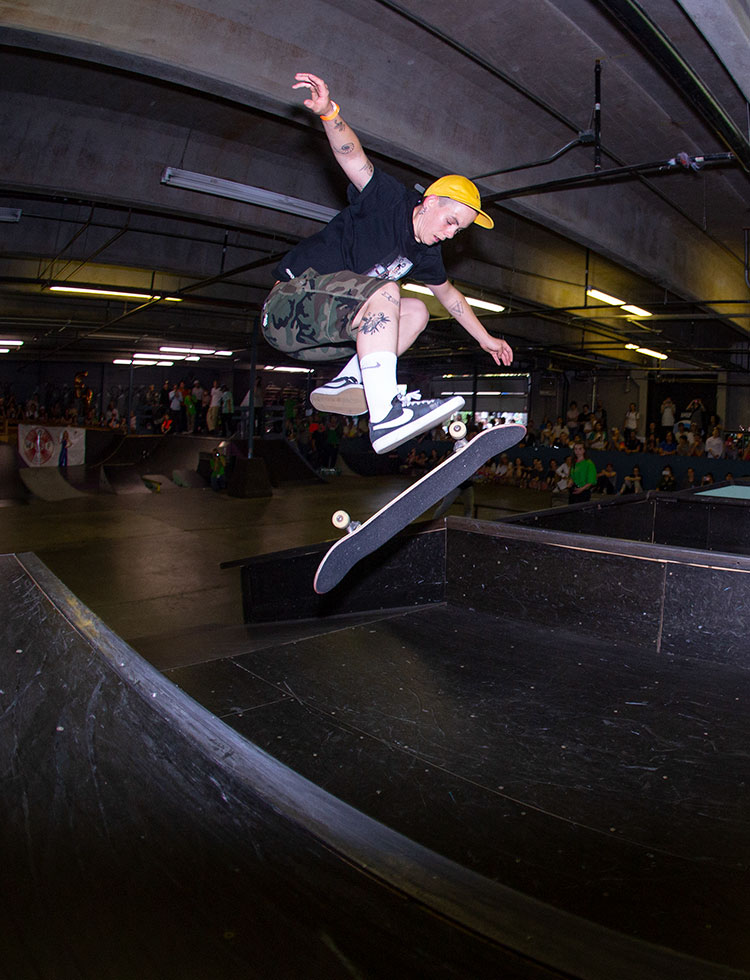 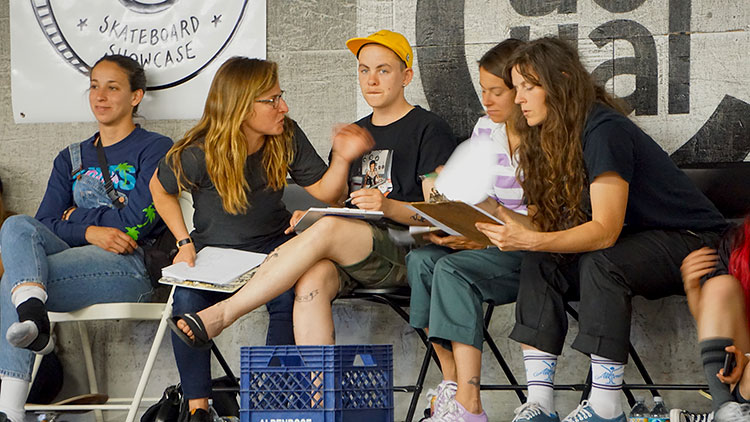 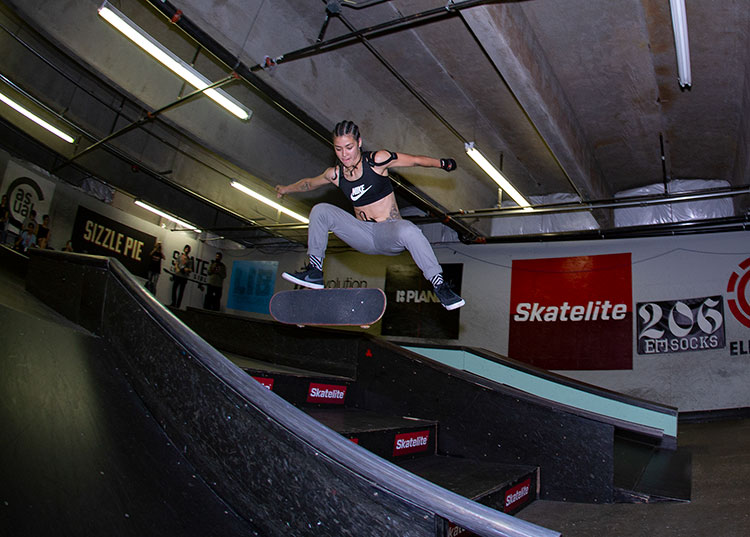 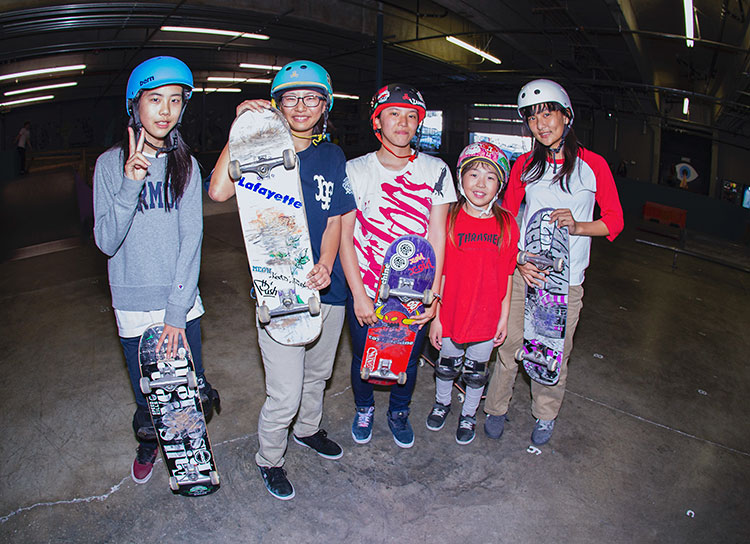 Japan was definitely in the house this year! Photo: Olga Aguilar 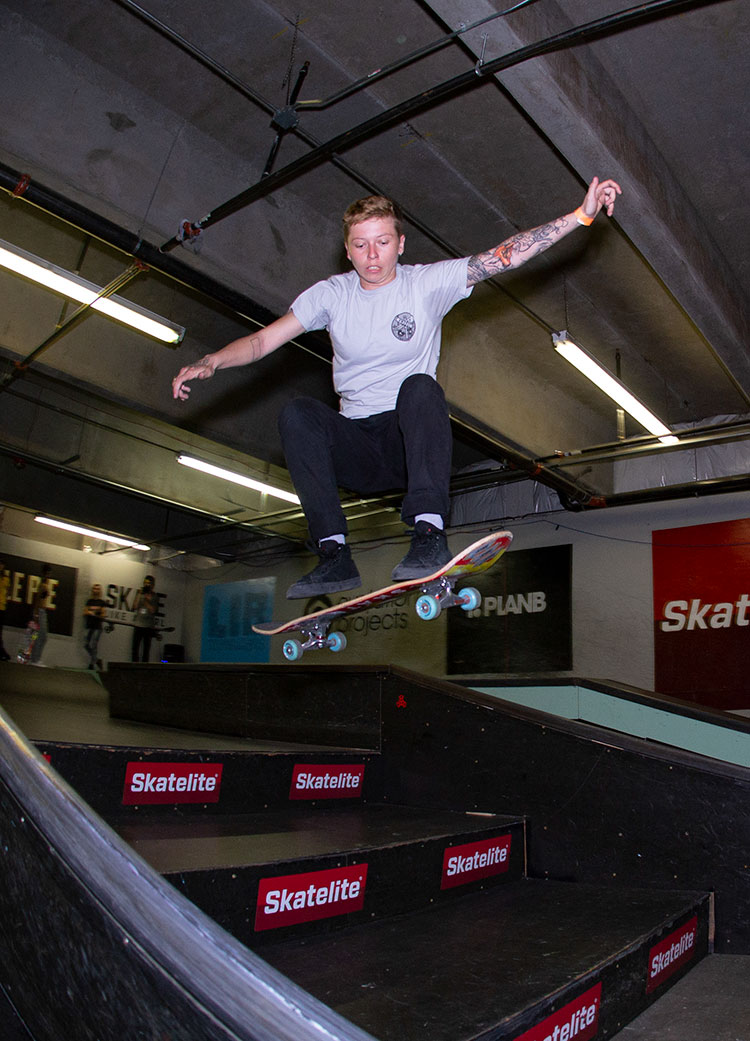 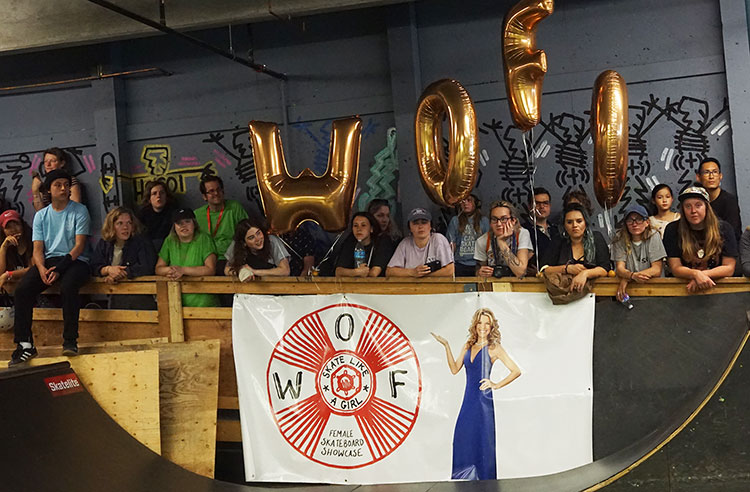 A giant crowd and giant festive balloons packed all 7,000 square feet of Seattle’s All Together Skatepark Photo: Olga Aguilar 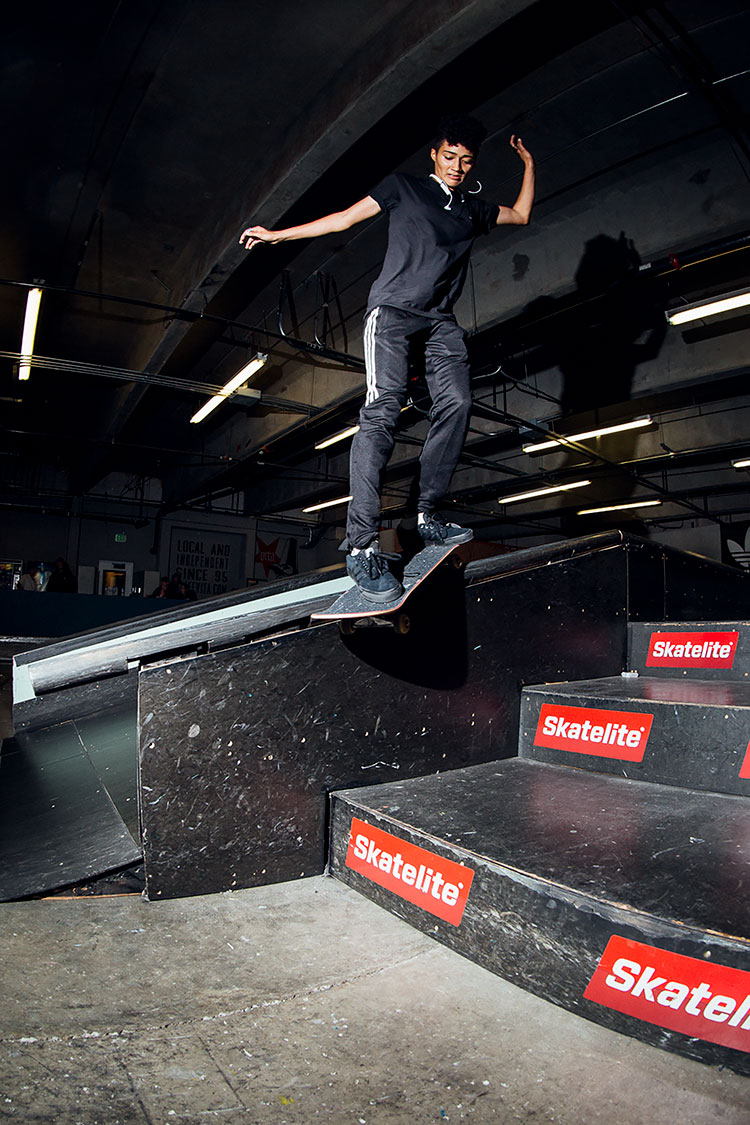 A murdered-out Jenn Soto murdered the down rail with this steezy back Smith Photo: Norma Ibarra 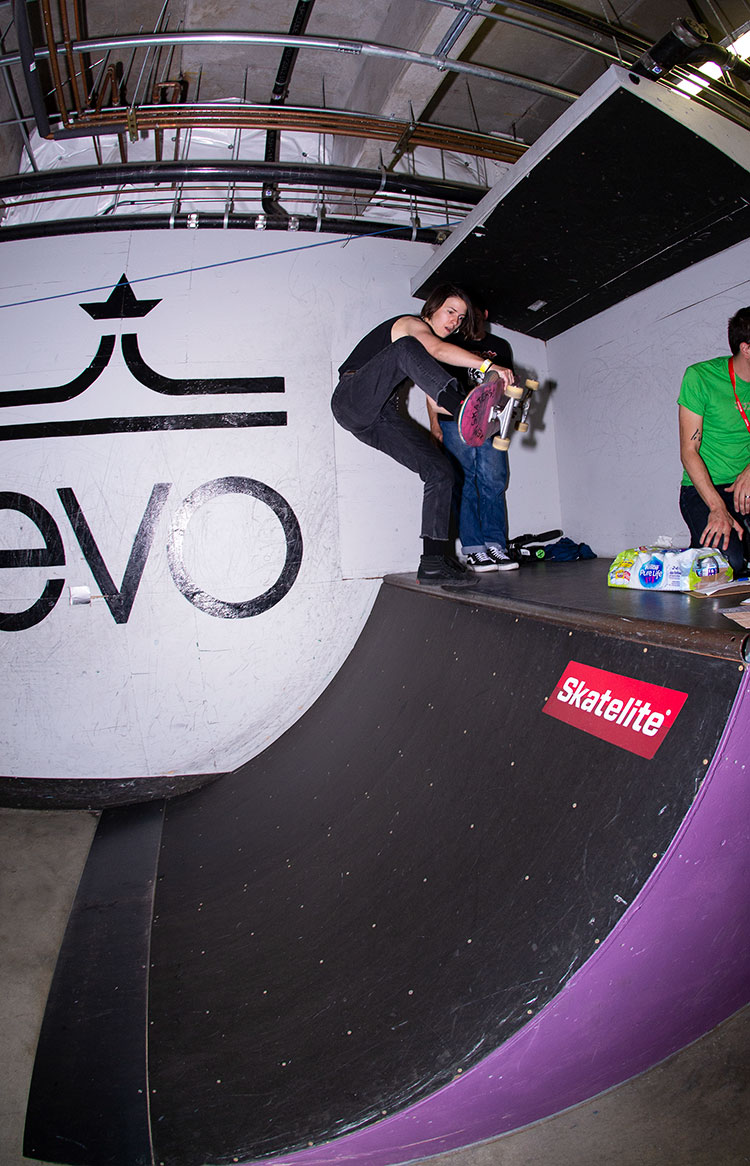 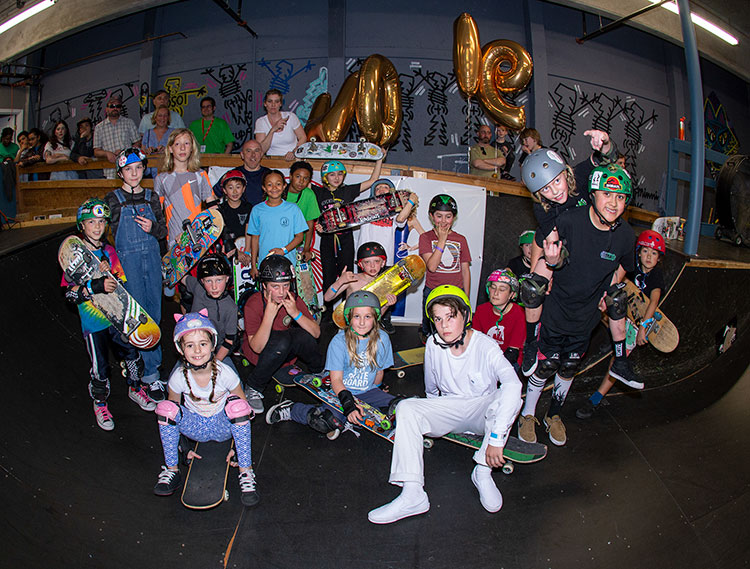 From kickturns to kickflips, the next generation is ripping—they even know how to pose for group photos! Photo: Olga Aguilar 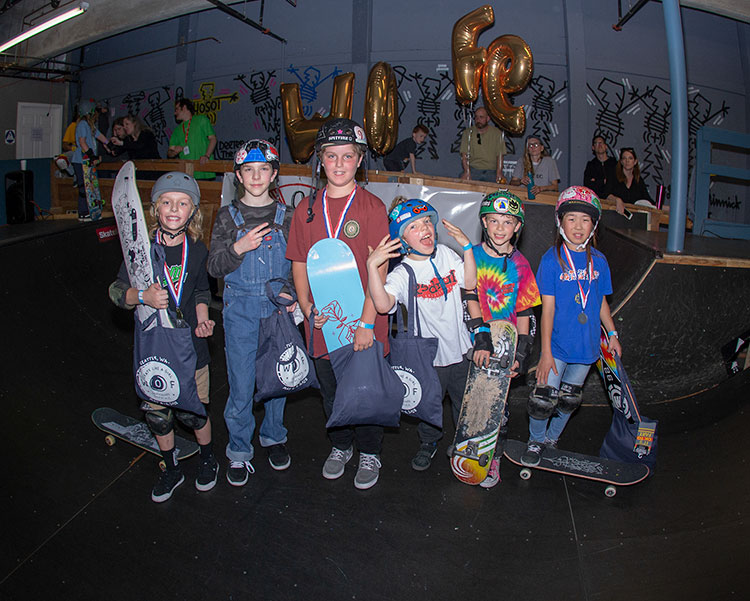 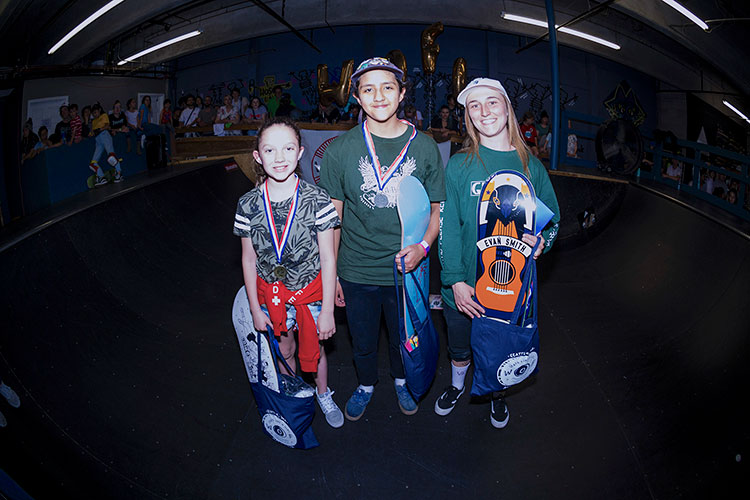 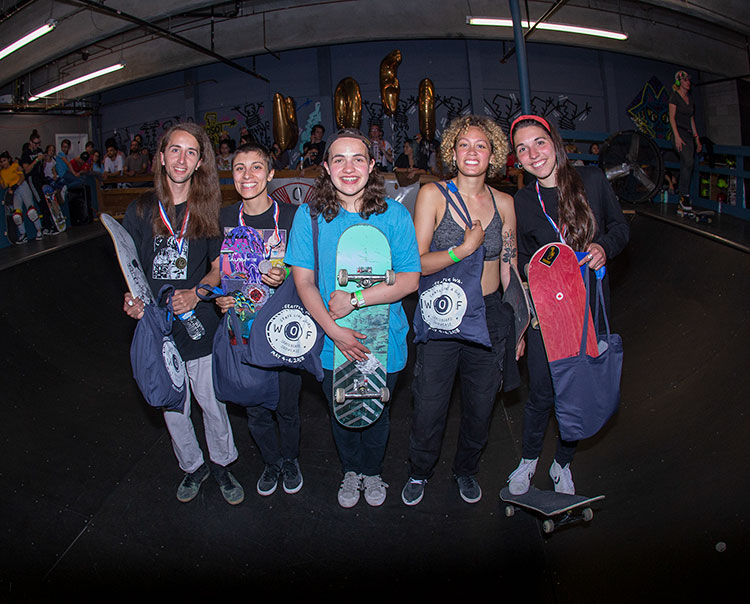 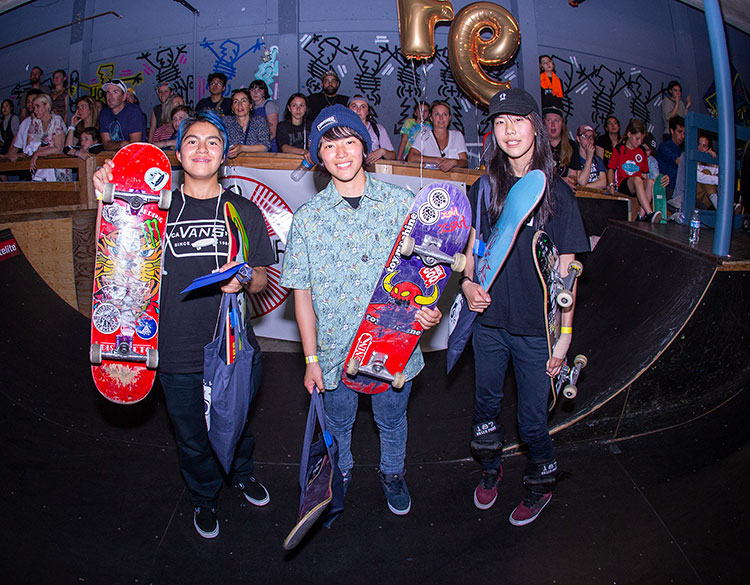 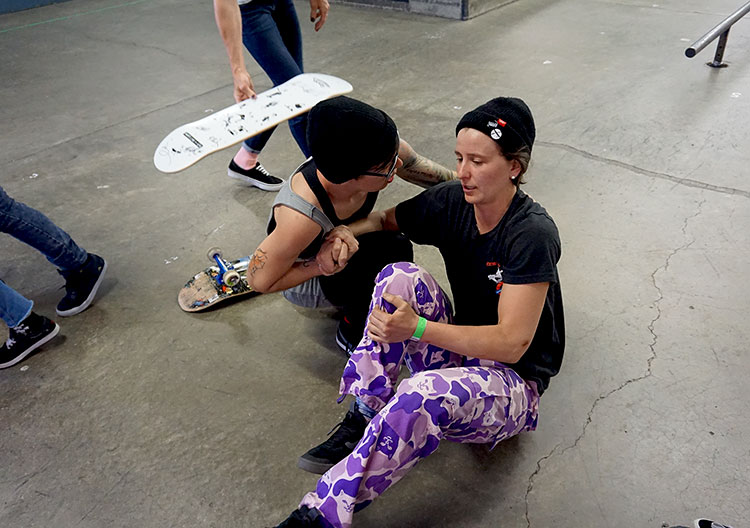 Friendship is helping your friends up when they fall. These Canadian rippers, Bil and Ellyn, know the drill Photo: Olga Aguilar 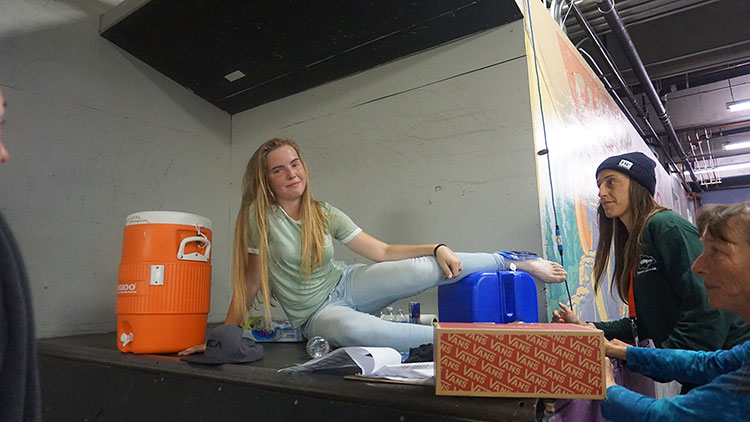 Despite wrecking her ankle in the last ten seconds of the final jam, Meagan Guy still came away with 3rd place in the Pro Division. Those 540 flips will be back in no time! Photo: Olga Aguilar 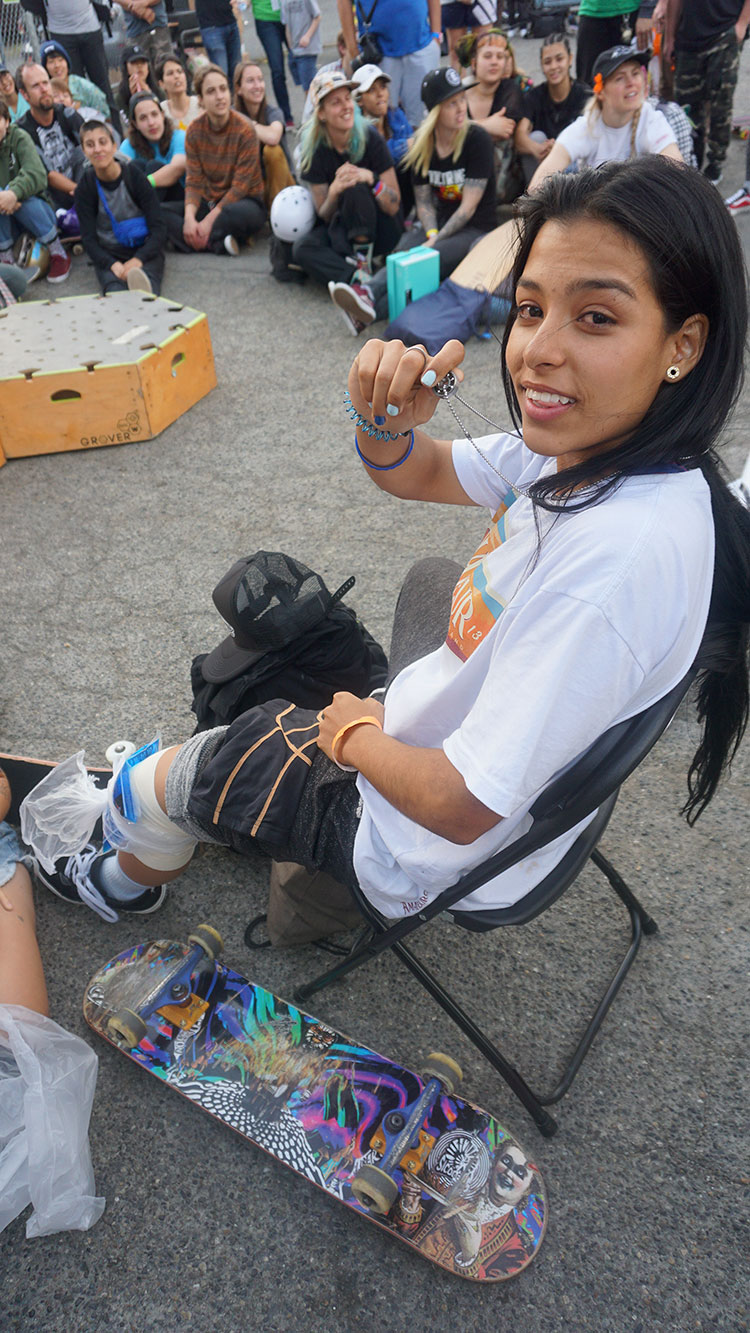 Colombia’s Ana Rendon jacked her knee during the last moments of the Pro Final, but not before earning her 2nd place spot on the podium. Heal up soon, bud! Photo: Olga Aguilar 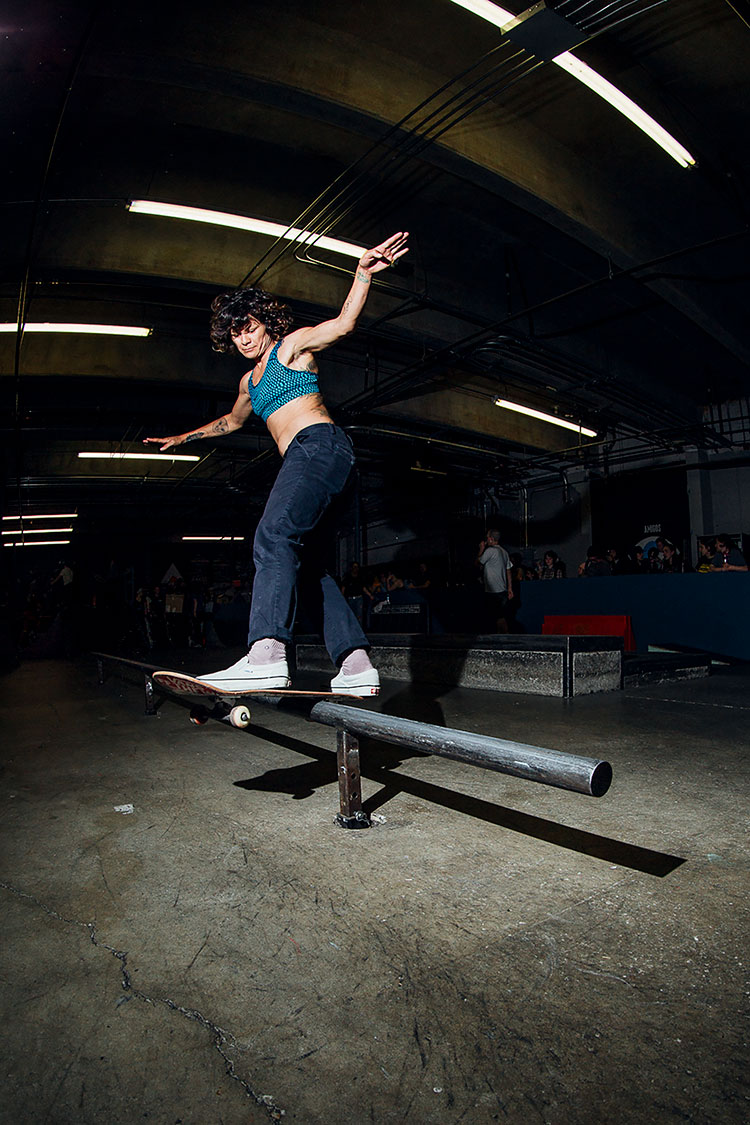 It was no shirt, no problem for skateboarding legend Vanessa Torres Photo: Norma Ibarra 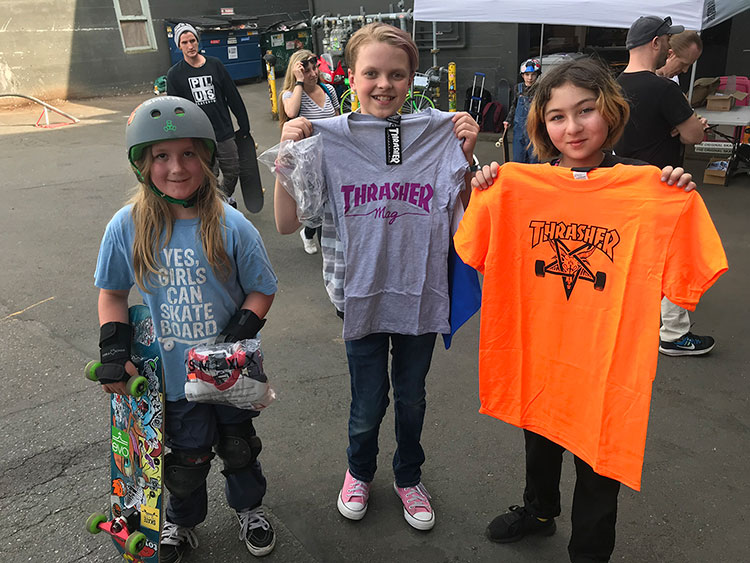 PSA: Thrasher is for the children Photo: Kristin Ebeling