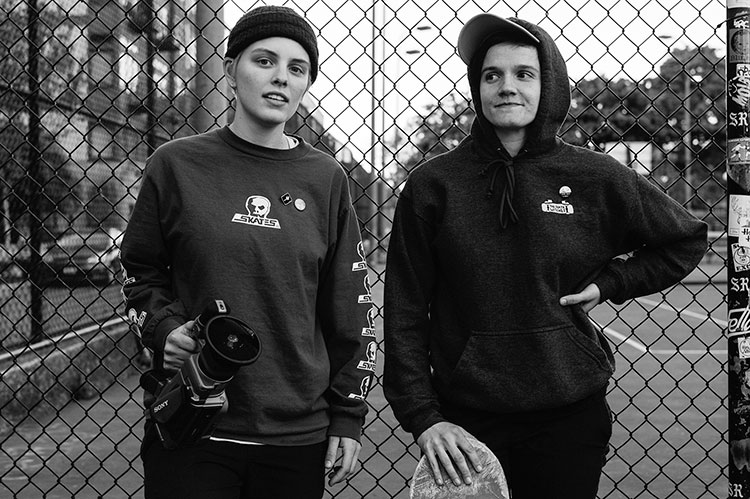 You might not know this, but Seattle is home to one of the world’s only skate contests for women, Wheels of Fortune (WOF), now in its ninth year. The contest is run by Skate Like a Girl, a nonprofit that works to make skateboarding a slightly less toxically-masculine place by getting more women on boards. Kristin Ebeling, Skate Like a Girl’s executive director, founded WOF because she was frustrated that, at every mainstream contest she attended, the women’s events were pushed off to the side, with super early start times and tiny prize purses. WOF is a competition for women, by women and has grown to include some of your favorite female pros. This year, Nora Vasconcellos is judging it and Stella Reynolds is skating in it, so you know it’s a big deal. It’s also grown into a weekend-long event, and in 2016, Ebeling, and her coven-mate from Vancouver, Shari White, launched a King-of-the-Road-inspired pre-contest contest called Witch Hunt. They realized that women from all over were flocking to Seattle for the Sunday contest, so they wanted to get everyone together and get the stoke started a day early. The Witch Hunt is a Saturday of non-stop skateboarding insanity, with teams of girl skaters running all over Seattle to complete challenges and win points. The challenges involve lots of skating, a bit of not skating and a ton of hilarity. It’s all ages, so there’s no pee or making out with strangers, but let’s just say that more than one of your favorite female pro skaters have left the hunt with a fresh Skate Witches tattoo. Read their interview, peep the vid and get stoked! —Tobias Coughlin-Bogue

Tell the world a bit about Skate Like a Girl. What is the organization and why did you start it?
Kristen Ebeling: Dang, I wish I could take credit for starting this organization but I can’t! Skate Like a Girl was founded in 2000 by Holly Sheehan and Fleur Larsen, with a goal of getting more women into skateboarding and creating a scene for us non-bros. Throughout the years, we’ve evolved into a three- chapter (Seattle, Portland, SF Bay Area) organization serving over 10,000 people of all genders annually. I started volunteering as a teenager 11 years ago and helped with everything from teaching little kids to skate to planning skate tours. About five years ago I decided to make what I did with Skate Like a Girl my career because my job at the time wasn’t exactly what I wanted to do with my life. I currently serve as the Executive Director of Skate Like a Girl.

And you launched Wheels of Fortune as part of that effort?
KE: I started Wheels of Fortune back in 2008 when I was 19. I had been to some of the major contests like Maloof Money Cup and saw that the women’s event was more or less a side show. The fingerboarding course had more people watching than the women’s event. Other times we were forced to skate at nine in the morning. I wanted to start something that was for us, by us. No bullshit. Even if it was tiny and no one cared, at least it was ours, you know? 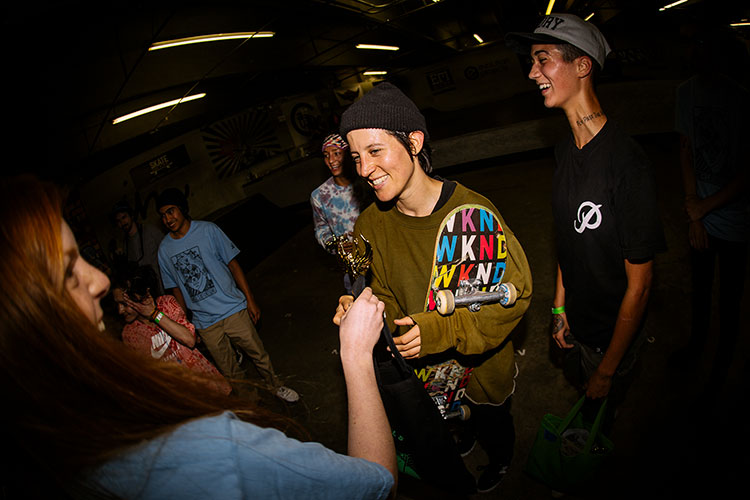 Alexis Sablone had a great Wheels of Fortune WKND in 2017    Photo: Norma Ibarra

Was it hard getting people interested at first? It’s year nine and you’ve got female pros from all over the world coming, but I’d imagine it was kind of an uphill battle in the beginning.
KE: It was definitely really small in the beginning. I think the first year we had maybe 30 girls total? But it definitely has snowballed thanks to longtime support from my friends Vanessa Torres, Alex White, Amy Caron and so many more people I can’t remember off of the top of my head! Speaking selfishly, this event is how I make new friends. It’s my Instagram feed in real life.

It was just the one day at first, but now you guys do stuff all weekend. What are some of your favorite extracurricular activities? I know you’re premiering that Elissa Steamer documentary this year.
KE: This year is pretty jam packed! Friday night we have a welcome party at the evo store with folks displaying art, womens skate films, free beer and kombucha and raffles. It’s a good way for everyone from the weirdos to the wallflowers to say hi and hang out. Saturday morning starts with everyone linking up at the Lower Woodland Skate Park before embarking on the Witch Hunt for a few hours of wildness. That evening we will meet up on Capitol Hill for a memorial Junk Jam in honor of our dear friend Sage Williams with a Gnarhunters pop-up shop at 35th North Skate Shop. The evening wraps with a screening of Timeless Areas, which is a documentary on Elissa Steamer produced by Beth O’Rourke of SeaLevelTV. Sunday is the contest, which arguably is the least cool part of the weekend! Ha!

For the uninitiated, what the hell is the Witch Hunt?
KE: Witch Hunt got started a couple years ago. We host a big girls skateboarding event here in Seattle called Wheels of Fortune and we needed something fun to do the day before. We wanted to do something that was inclusive but silly, and something that everyone could kind of laugh at or be a part of. We thought a scavenger hunt would be really fun. 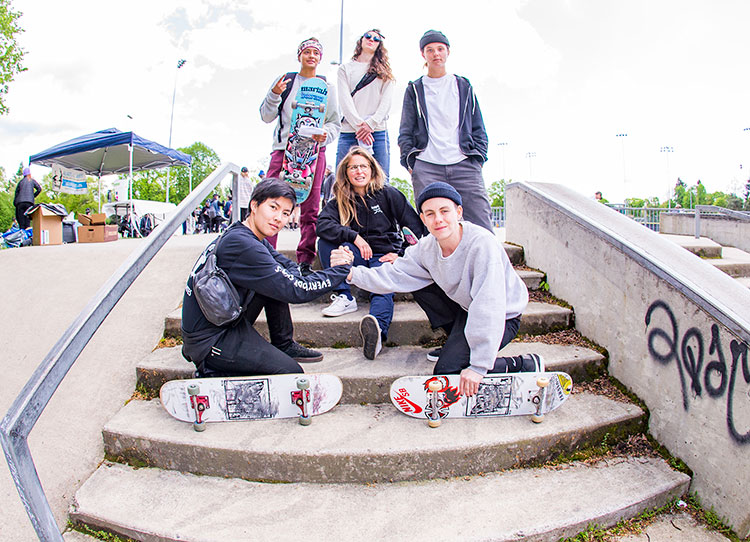 What exactly happens on the Witch Hunt?
Shari White: Well, you make a group with your friends—old friends and new friends! And you complete challenges for points, film it and then you share them with other people.

What do you win?
SW: Witch Hunt is sponsored by the Skate Witches. All the prizes last year were Skate Witches gear. This year, we have some bigger prizes and more glory. Stay tuned.

What are the Skate Witches?
SW: The Skate Witches was first our All City Showdown team name in 2014. We started the zine as a side project, something else to do in skateboarding, contributing not just participating, but also because we felt like girls weren’t being featured in magazines, so instead of complaining about why we’re not in the mags, it made more sense to put our energy into our own project. To have a book that’s tangible, to open it up and actually see all the girls skateboarding that you wanna see in one place.
KE: We try to feature all different ability levels. We care more about the quality of the photo and that it’s at a street spot, not necessarily the trick. There’s not a high bar. Like, we’ve put in photos of girls doing frontside rock ’n’ rolls or ollies or whatever, and I think that’s important also, because the majority of girls that skate are not top-ten best in the world. It’s definitely about showcasing the existing community instead of looking through this mainstream lens of, “It has to be good enough.”
SW: But also like, “I can do that trick, and she made it look really cool the way that photo was shot and the spot that she chose.” So even though I’m not super good at skateboarding, I can do this trick and I can make what I do look cool. And I can be a part of it. 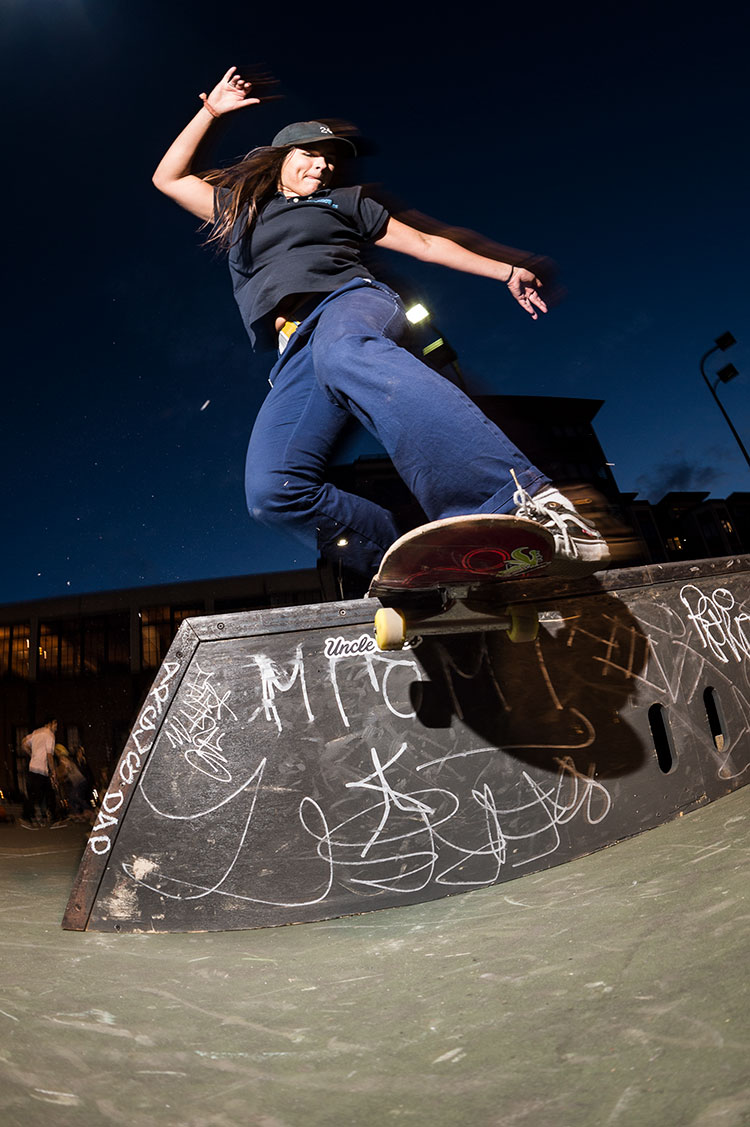 Yeah, one of the raddest parts about WOF weekend is seeing how many girls you’ve gotten into skating. I feel like a lot of that starts with just seeing other girls out there doing it. Speaking of doing it, what are some of the craziest Witch Hunt challenges? What’s your favorite challenge?
KE: One of the funniest ones was to tell a boy at the skatepark that he’s too cute to skate. One of my favorites was teaching a guy to skate. Our friend Kat matched with a dude on Tinder, met up with him and taught him how to skate. That was hilarious.
SW: Cake to the face. I got caked really bad!
KE: She didn’t know! We plotted against her.

What’s kind of exciting challenges do you have in store for this year?
SW: The Britney challenge: Shave your head.
KE: You have to have hair that’s shoulder length or longer, though.
SW: We’re DQed from that one! We already went full Britney.
KE: What are some of the celebrity ones we have?
SW: Leticia Bufoni—do ten pushups in your bra and then a tré flip.
KE: Speaking of bras, we also have one where your whole team burns their bras together.

Sick!
KE: We definitely have a lot of skate-related ones and spot-related ones. Like, doing a flatground trick inside 35th North, nosesliding the Gasworks ledge, wallriding Garfield. Just kind of getting those iconic Seattle spots in there.

It seems like a lot of the challenges are poking fun at stereotypes of women in skateboarding? Like, “Oh, we’re all gonna burn our bras, because we’re all crazy feminists!”
KE: Oh, totally. I would describe it as a fun way to smash the patriarchy. One of the challenges I just remembered was to tell a guy skating that it’s really good to see them out here and that you’ve never seen a guy skate in real life. Basically we took our lived experience and just flipped the pronouns! 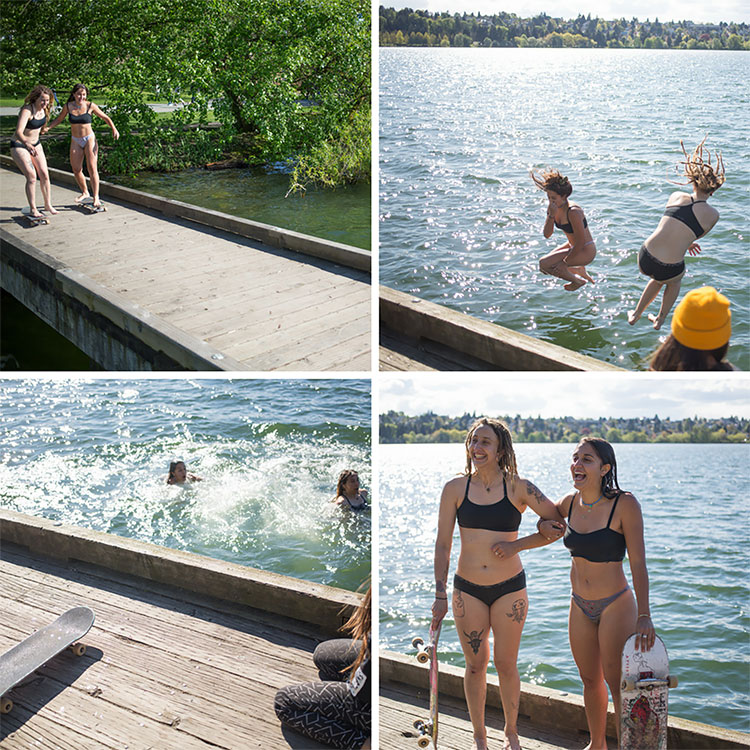 Does anyone have to make out with their double?
KE: There’s no making out with strangers. We keep it pretty wholesome.

Which famous female pros have gone on the Witch Hunt?
Both: Lacey Baker, Vanessa Torres, Jenn Soto, Mariah Duran, and Alysha Le. A bunch of girls from all over the world, too. Kate Shengeliya from Russia absolutely murdered the last two years. Ana Rendón from Colombia, Una Ferrar and Breeana Geering from B.C. 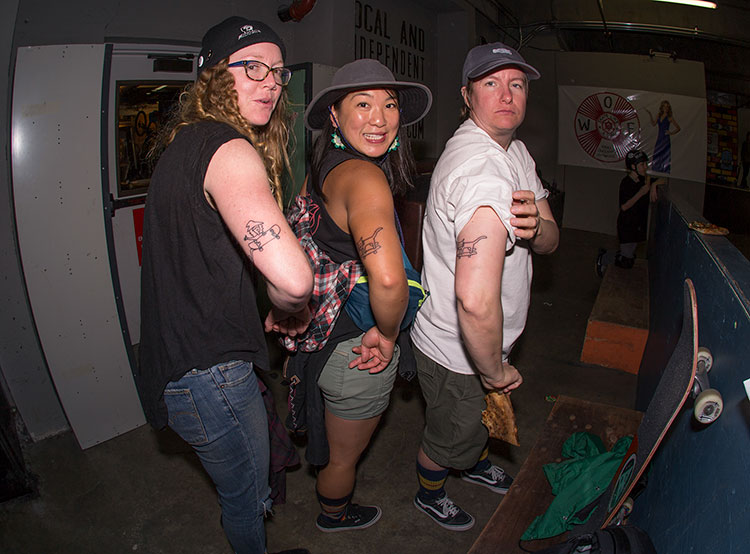 Sick. Any last words?
KE: I would definitely encourage anyone that’s feeling isolated in their little town, like they don’t really have a community and they wanna get inspired and meet people—they basically wanna live their Instagram feed in real life—come to Wheels of Fortune!

You’ll have a good time?
KE: You’ll definitely have a good time. There are girls from all over that come to Seattle to participate and make friends. And they’re all so inspired. It’s kind of like what Thrasher is to someone in rural Oklahoma, it gets them inspired to keep skating, right? I feel like we’re trying to do the same thing, just for girls skateboarding because it’s still so small. Trying to bring the community together.

And hit them in the face with cake?
Both: Ha! Exactly! 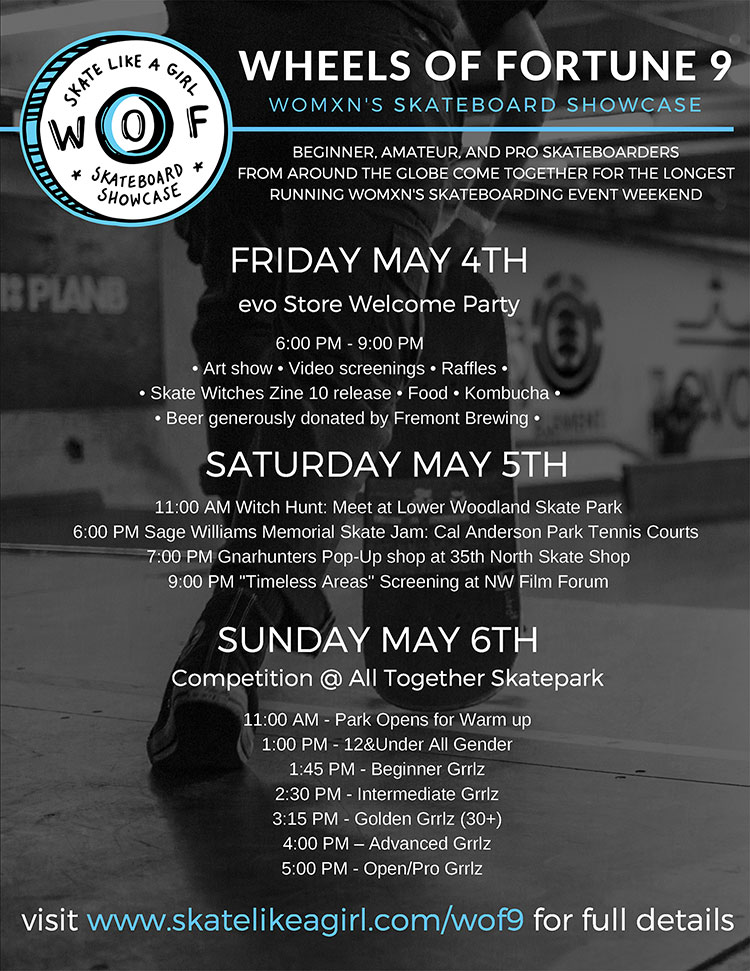