Spanky's "From Pro to Flow to Pro" Interview 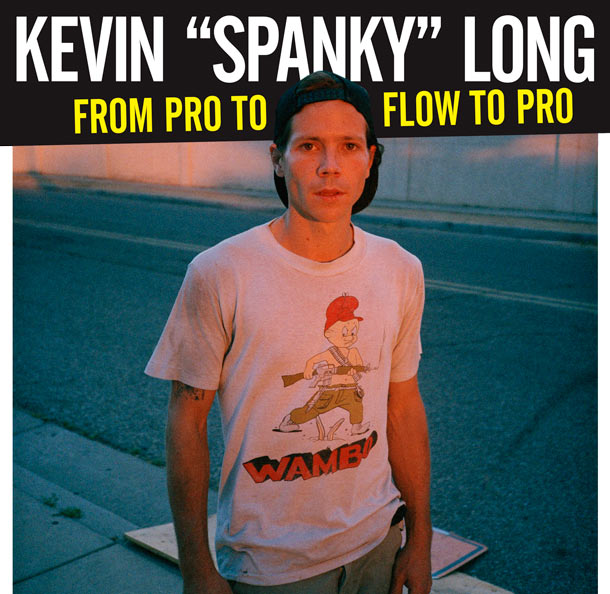 So congratulations, Kevin! You’ve done the impossible. You’re back on the team. What was worse: having your friend set you on fire or having your friends take away your career?
Probably taking away my career because I was responsible for that.

Yeah, I was gonna ask, what went through your mind when the news came down?
What that my board had been taken away?

Yeah.
Actually, just total acceptance. I kinda knew it was coming. I wasn’t doing shit. I wasn’t gonna, like, plead for six more months to start killing it or something. I just wasn’t. I don’t know. I just wasn’t really being a pro skater. 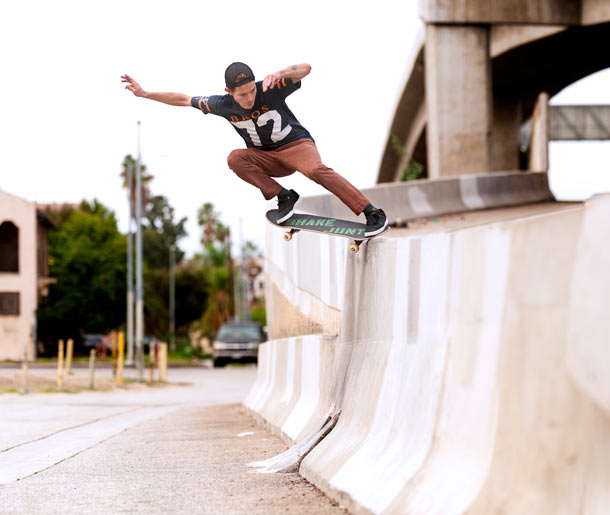 Looking back, did you feel like you deserved it? To have your board taken away?
Yeah, I mean, I don’t think everyone’s entitled to have a board forever. I wasn’t pulling my weight. I wasn’t out there and I wasn’t holding up my end of the bargain.

So what happened? Did you lose your mojo for skating? Did you just get excited about other things? What led to this situation?
It was a gradual thing. It was definitely not a decision. I just kind of, I don’t know, I lost some faith in my potential and just took the lazy route and kind of fell out of love, not for skateboarding, but for going out and taking it serious and I just got overwhelmed by a whole bunch of things and just kinda didn’t see a lot of value in what I was doing on the board. And I was wrapped up in partying and all the luxuries of not having a nine-to-five job. So I just lost my ability to be diligent or have any sort of focus, I guess.

That’s a good point because it’s a very loose schedule, this pro skateboarding thing. You kind of make your own schedule. There are certain demands, but otherwise you kind of have to be a self-starter.
And it takes a varying degree of discipline and I’m not the type of skater where I can rely straight up off of my God-given talent. I’m a skateboarder who needs discipline. I lost my will to discipline myself and push myself, I think. 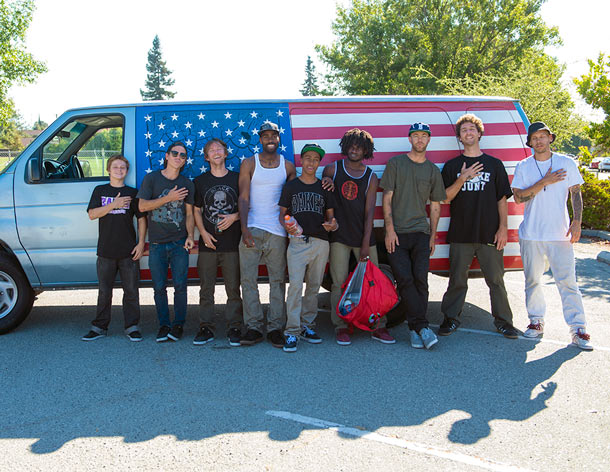 Looking back, what was your most self-indulgent, non-serious thing that you were doing? Buying leather jackets for all of your friends and going to Hawaii?
No, I don’t know. There was never anything like that. I can’t think of any specific flashy, self-indulgent, anti-skating thing. I was just, like, skating curbs and getting drunk.

Did you have that Slash FOMO? Were you out every single night?
No. Not at all. I wasn’t out clubbing and doing blow off stripper’s tits or nothing. I was sitting at home drawing and trying to figure out what’s next. But being, like, very unproductive.

So the news coming down fell within a series of kind of harsh things in your life right, besides getting set on fire?
Yeah, there were a couple of years where there was a lot of crazy shit happening. Yeah, my
mom passed away, basically lost all my sponsors, got married. 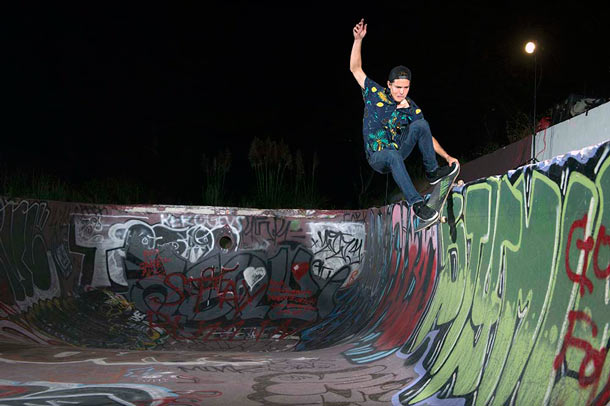 Okay, let’s cut to the happy ending then. So you lose your board, they took your name off of the Emerica ads, some dicks wrote lame shit about you in the magazines. How did that spark this fire in you to come charging back? How’d you pull this off?
That was also a semi-gradual thing, but what happened was first I started just looking at this opportunity differently and wanting to do something about it—not necessarily get my sponsors back or anything like that, but some super-close friends were like, “Dude, why don’t you try not drinking, see if that helps. Figure out what the next step is and give skateboarding a real go.” So I was, like, “Sure, that’s no problem,” thinking that it was just gonna be some casual-like experiment. And basically, for one reason or another, I re-found my passion for skateboarding and realized that my body wasn’t as bad as I thought and that I had actually just been torturing it and kicking it while it was down! So I started skateboarding every day and I really just fell back into being out there and decided that my potential was much different than I thought. I just started wanting to chase my own potential. And that snowballed into being accountable, being present, being out there and having a blast and getting healthy and skating with the guys and re-forming relationships and, yeah, things have just been slowly coming back together. 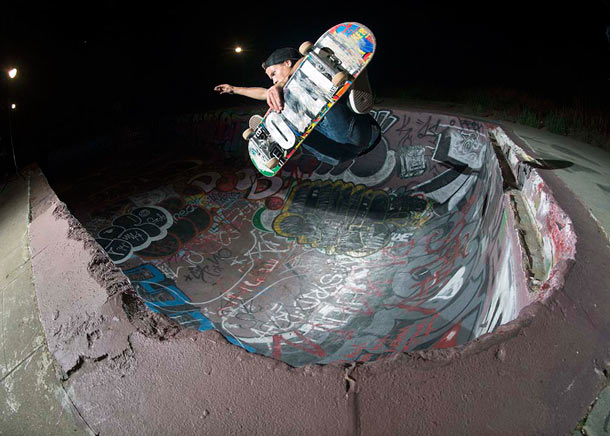 So you made a rational decision to try something healthier with your life? That’s so simple but amazing because it happens so rarely.
Yeah well, it kind of happened on accident. If I had to sit there and make the decision it probably would have been too much pressure and I probably wouldn’t have done it, but I accidentally experienced a taste of what it’s like to try and get your shit together and then it was, like, impossible for me to turn back. For me, skating for twenty years, it feels like it would be impossible to hold the level of obsession to go out and do it every day and push yourself every single day like when you were a little kid. And kind of losing skateboarding for a little while and getting wrapped up in that other shit I feel like I have this fortunate perspective. It’s like falling back in love is almost more powerful than when I fell in love with skating in the first place because I see all the good times and what it feels like to push yourself and love it. And then I felt what it’s like without it. It’s just different this time around. I really appreciate it; being able to do something I love so much. I might sound sappy and maybe a little too serious but it’s just how I feel. 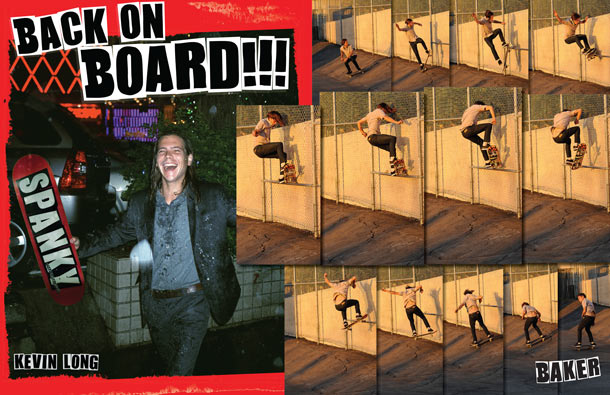 What do you want to do as a pro skater part two?
Basically, I just want to, for the first time maybe since I was a little kid, try and reach my full potential, whatever that is. Maybe that’s a video part, maybe something I could be proud of. And you know, your potential always changes, but I’d just be happy to look at something and know that I gave it my all and wasn’t distracted by other things or taking anything for granted.

Too bad.
I don’t know how else to describe what happened, you know? I feel like skateboarding doesn’t need to be taken this seriously, but it can also be a source of something fuckin’ true. It can be a super-powerful tool and I’m just grateful for all the things that skateboarding has provided in my life and friends around me.