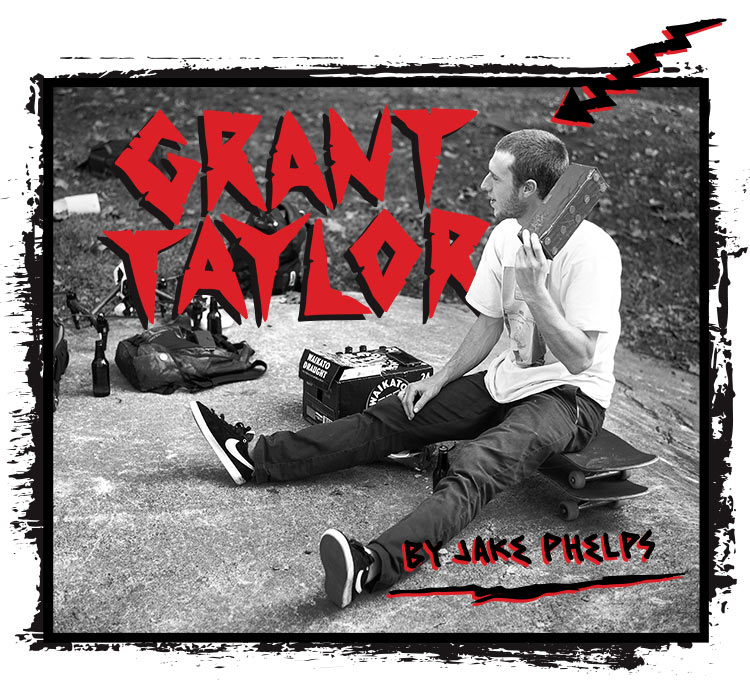 Yo, Grant, what’s up? How are things going in Atlanta?
Pretty good. Springtime weather. Getting some spring cleaning going.

You’re cleaning out your house? Your cave? What are you doing?
I’m just cleaning up the yard and shit, draining the bowl, getting a bunch of shit out of here. 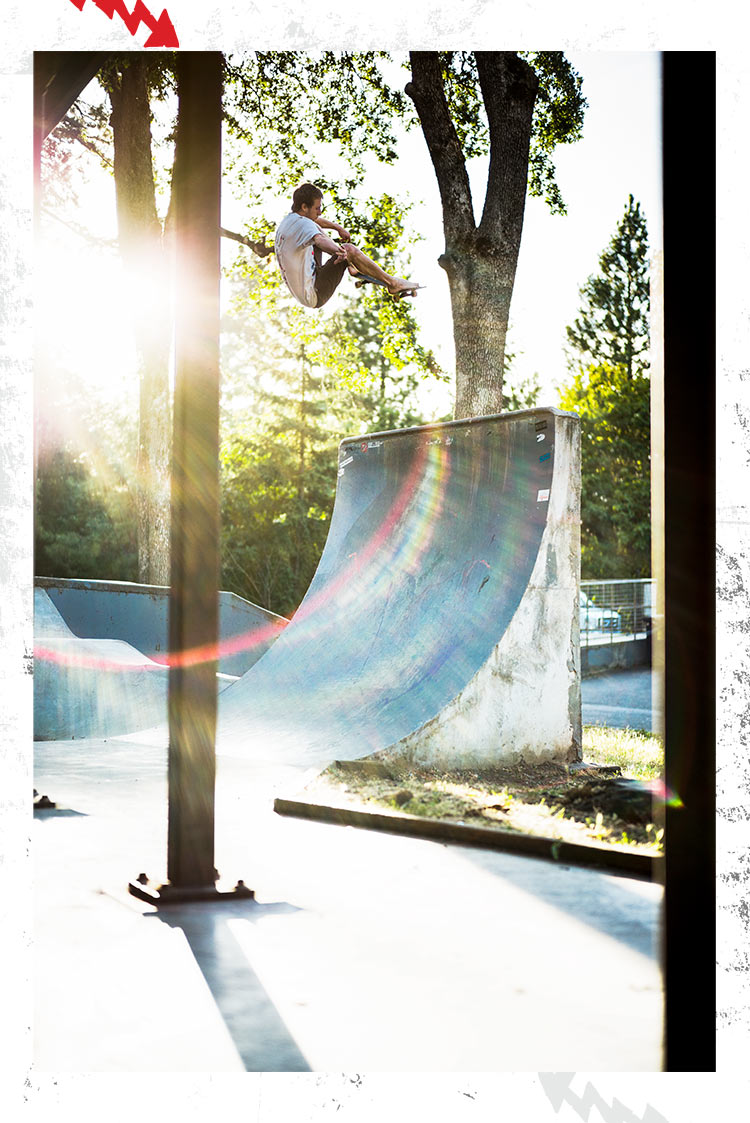 How old were you when they built that bowl?
Fourteen? Fifteen? Yeah, around then.

But you weren’t as big as you are now, so it was a lot bigger when you were a little sprout, right?
Yeah, definitely. It’s, like, a seven-foot wall but it seemed big at the time.

Did you take some heinous hits when you first started kicking it in there?
Of course. Trying to learn Madonnas one day—nope.

You thought you did. No such luck.
Yeah, some of my friends came over and I was, like, “Check it out. I just learned Madonnas.” Hung it out to dry. Big time.

Grant, we’ve been running pretty hot, you and me together since, like, 2010.  Six years deep. We just got back from South America, man. What a ride, huh?
What a ride.

It’s far from over, right?
Exactly.

They’ve been going through this Volcom video; it’s two years in the making. Are you hyped on this Voltron experience?
Yeah. It’s been a fuckin’ sick ride. A lot of gnarly shit’s gone down and I guess you can’t film forever, so time to drop it.

You can’t film forever. Especially nowadays where everybody’s so quick on stacking clips on the ‘gram. It’s pretty hard to make a full-length vid. We went to fuckin’ Argentina twice this year—
I was gonna say, two hits in South America already.

Right? We’re hitting and running. When you were starting out as a little kid did you ever ride for, like, Twigs? Or was it your dad’s company first? Was Stratosphere first and then Torque? How’d it go?
Yeah, it was Torque. When I was young he was doing that company. I guess I was riding whatever boards I could get at the time, flow for companies here and there. 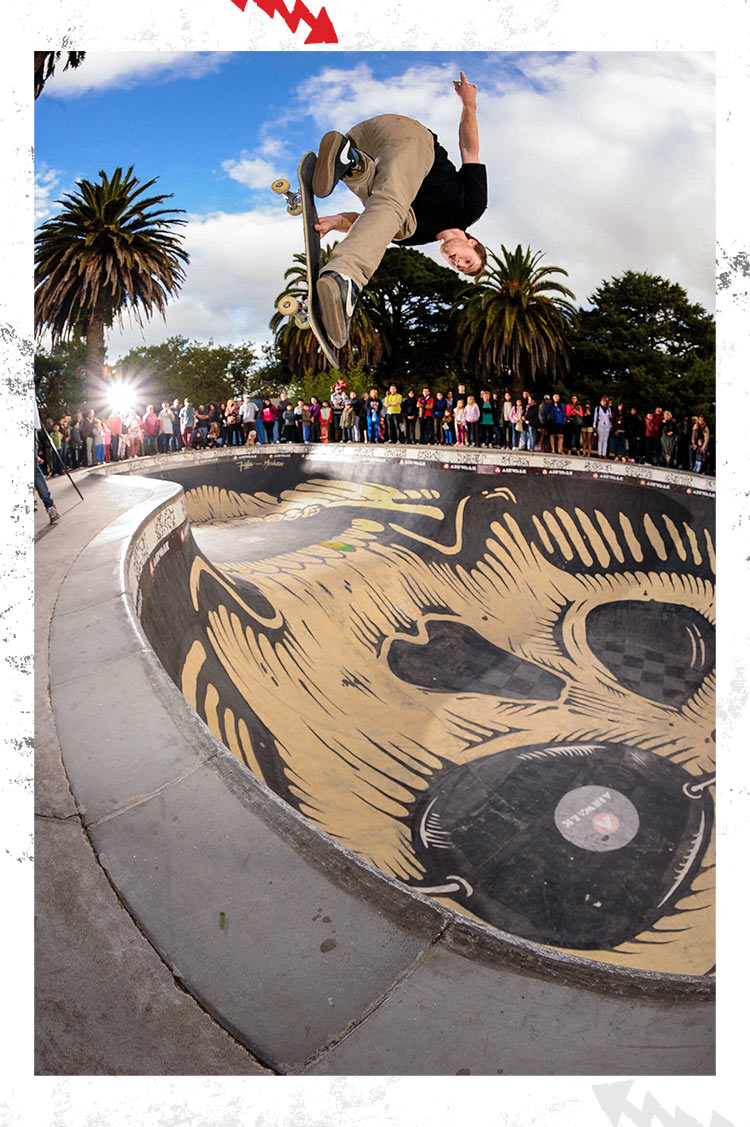 And then Alien hooked you up. Who hooked you up on Alien?
That was through Tony Heitz who was the TM at the time. He put me on the squad. I was a young gun.

Well, you showed me you were kickfliping 14 at 14. That’s pretty big, right?
Yeah. Kickflipping the big shit.

Like what Figgy always says, “You best learn them kickflips, son.”
How’s your kickflip going?

Oh, lazer flip, dude. Big lazer heel. No, big walrus double walrus. That’s how I’m running it now. So how come you didn’t go to Australia for the Vans contest? Why’d you pull out on that? I thought you were already pre-qualified. I thought they were paying you to go.
I was ready to hit it but I’ve had a fucked-up ankle since January and we’ve been trying to finish up this video and whatnot, so I’ve just been hitting it without any time off to let it heal properly. So now that this shit’s done, I’m just going to take a break for a minute. It feels good to be home.

Well, you put your body on the line diving into empty pools in Africa. That was pretty rough. What are you going to do this summer? Are you guys going to do a worldwide tour for this video? I mean, obviously this is gonna be one of the last videos coming up. You got Nike shit coming up? What else you got to do?
No big video projects as of yet. Just hitting those Vans contests, I guess. Staying ready for whatever else.

I told you; you gotta get that shoulder worked on. You gotta figure that out because once you take that slam you’ll be, like, “Fuck yeah, Jake, I’m back.”
Well, I’m gonna have to take that shit soon because the shoulder ain’t getting any better. 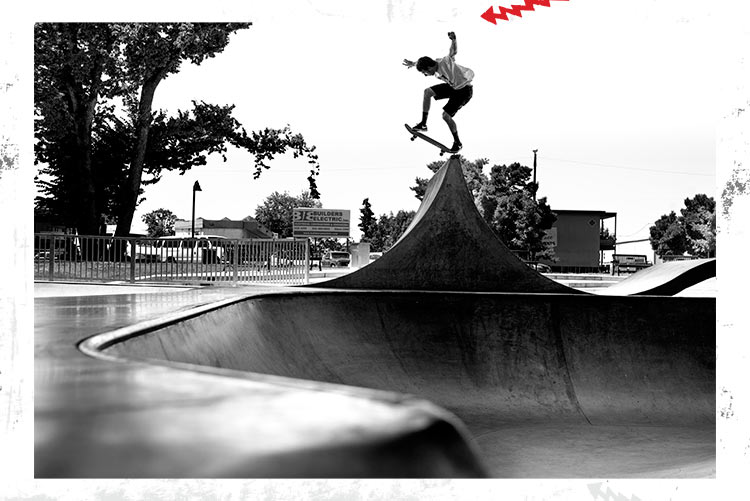 Diver Down, Taylor Up—to back tail in Eugene     Photo: Arto

No, especially ‘cause you’re only 24 years old now—
Especially when I’m falling into fuckin’ pools, like you said.

No, diving into empty pools. How many people can say that?
Straight diving. Diver down.

Diver Down, the best record. You gotta look at that album cover. When you think about back in the old days, you were a little kid when you started hitting the road and shit. Was it just, like, blowing up toilets and eating candy and shit? What kind of shit did you do for hijinks?
Shit got kind of wild a bunch, you know? As a little kid you’re always looking for something to fuck with. I got really into burning shit. I still am but I was a little pyro, I guess. At skate spots when someone would be trying a trick, I would just start a fire in the corner and next thing you know we’re getting kicked out. Not ‘cause of skating but because of the fire I made.

So when you look back on those days, who were the skaters you looked up to when you were a little gherkin?
I’d say obviously Cards and maybe some hometowns: I skated a lot with like Graham Bickerstaff, Sean Stockton, Jason Guthrie, my old man, you know.

Well, how’d you break your arm? How old were you when you broke your left arm where you’ve got that one gnarly scar?
That was skating the back of a pickup truck with, like, a jump ramp to the tailgate, skating it with Justin Brock. I went for a lipslide and my wheels got caught up and I just went arms first. Snapped it, got up and was just, like, “Alright, fuckin’ lets go.”

Hospital.
Yeah, the hozzy was just across the street. Jump ramp right into the hozzy.

When Alien went out of business did you get any kind of inkling that it was going down the drain? What happened? The shit just kind of went sour?
That was actually crazy. A lot of people had left the team already and I was feeling the itch, so I had left. Then maybe not even a year later, Chad Bowers called me up and he’s all, “Yeah, Alien’s completely done.” And I guess those guys didn’t even have a warning. It was kind of just paycheck time came and there were no paychecks—nothing. They said, “We’re bankrupt and we’re shutting down the office. Doors are closed.” I felt bad for those dudes because they just got left cold shoulder: all the workers, employees, the riders, everyone was just—

Straight out of luck. You got a good ride. You got the call up to the big 1-8 right off the bat. We were, like, “Hey, this is the guy. We gotta get this.”
Yeah, thanks to Grosso sending me all of the subliminal messages all of the time trying to get me on there. 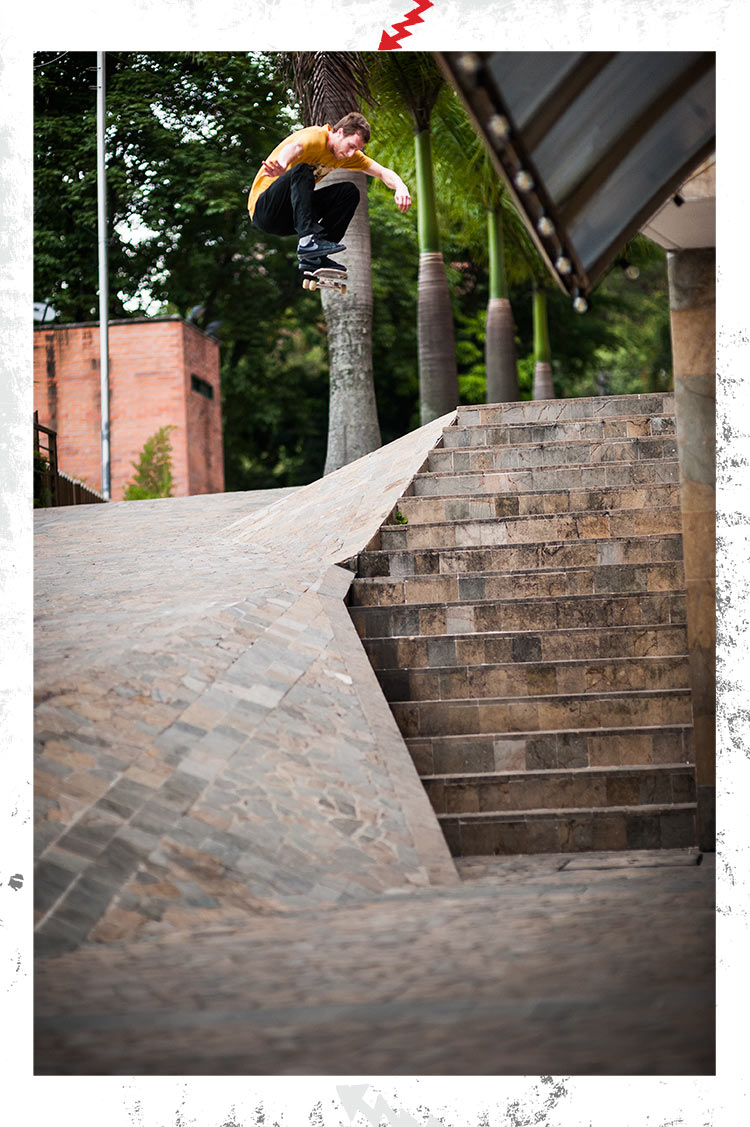 Bank to bank, with a lot of kick flipping air time in between    Photo: Remy

Good. Because I remember we were in Paris and I was, like, “You’ve got to ride for the 1-8,” and you were, like—you gave me the finger with the Alien tattoo and I was, like, “Fuck you. We’ll break it off.”
Yeah, you did say that.

What do you do every day now when you wake up? You’re still working on the bridge. When’s the bridge gonna be finished? Or is it a work in progress forever?
There’s some light at the end of the tunnel for a finished project. It’s gonna be a while. It’s gonna stay that way. It’s good to have a project to work on.

Yeah, you gotta build that barbeque for P-Stone. Nothing worse than that, no place to Q.
No, he likes the mini Weber in the dirt. As close to the dirt as possible so everyone’s walking around it. Get all of those flavor nuggets. Flavor blisters all over the fucking shit.

When we saw that soapy thing in that creek we were, like, “Yeah, look, Preston, natural hot tub.”And he’s, like, “That’s perfect.”
Yeah, he cooked up some live lobster down there too.

Was it for your birthday or was this something different?
I think we were just doing it. We went to the super market and he saw live lobsters and he was, like, “I got it.”

When you look back on all the history of—I mean, you’re only 24 now, you’re gonna be skating for the rest of your life.
I think I’m 25. 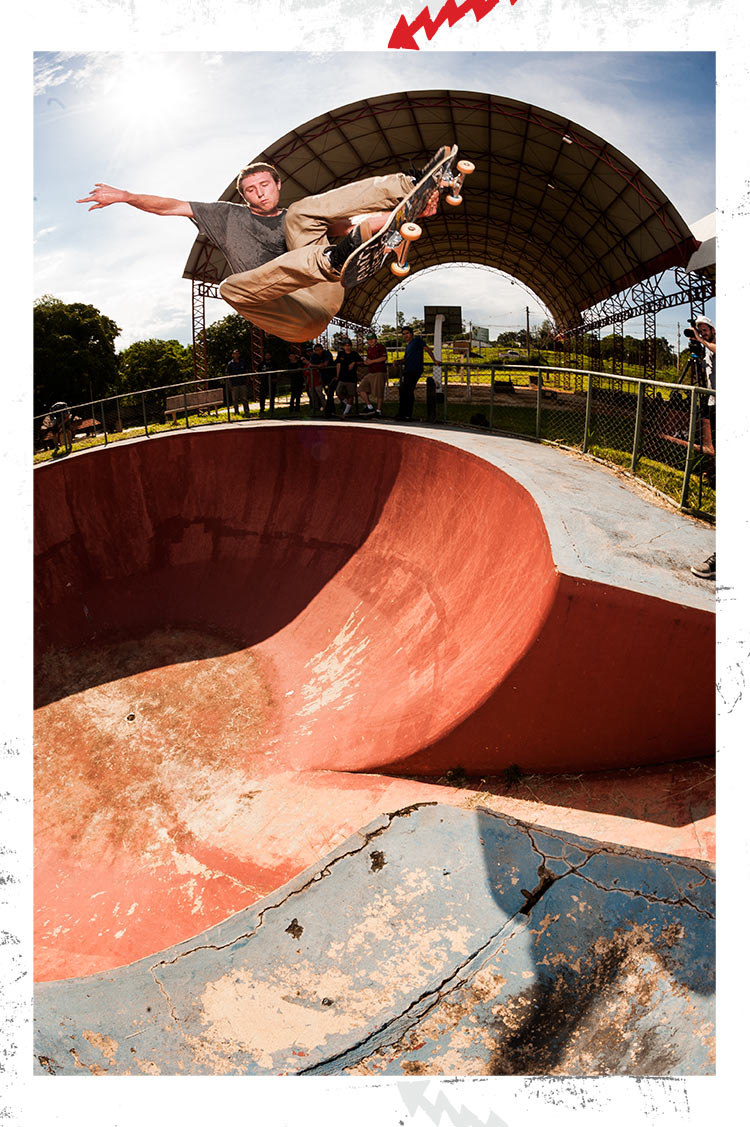 Isn’t it funny that you and Ishod were born within the same week of the same year? Isn’t that crazy or what?
That is trippy. Is he 24 as well?

Well, I do believe if I just said, “within the same week of the same year,” he’s gonna be 25 too.
I don’t know, man. I stopped doing math in the sixth grade, so—

Did you quit school or did you graduate?
I dropped out.

Good for you.
Yeah, best move I ever made. No regrets.

No regrets. Are you getting ready for Patlanta’s wedding?
We sure are. I actually got fuckin’ fitted for a suit today. 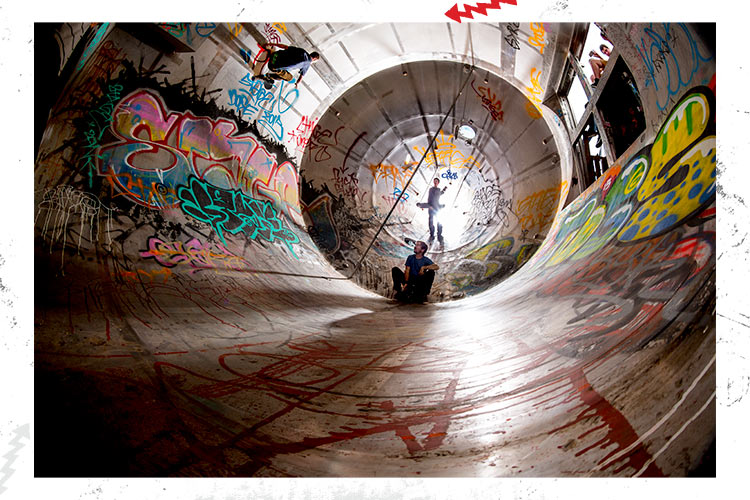 Ta-da! Little Grant’s gonna be fully grown. Are you gonna be the bridesmaid? What are you gonna be?
I think. Yeah, I’m the best man, actually. I think he just gave me that honor so that I could plan his fuckin’ bachelor party or whatnot.

So you’re gonna go to the Caymans and get ridiculous?
Fuck no. We’re going to the worst strip clubs in Atlanta.

Gold diggers? What’s it called?
And that’s what he’s getting. We’re going to Goosebumps, Tattletales and The Pink Pony. That’ll be that.

It’s what tells you what’s up and what’s wrong and what’s weak. This is it, right?
Pretty much. 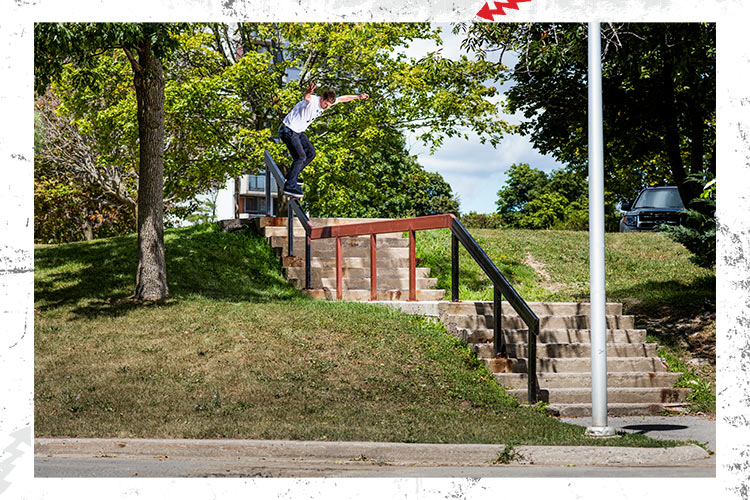 Pretty much, dude. I just want to get on some more Volcom trips. Now that Remy’s back in the fix we gotta make sure that he takes us on the road  some more.
Yeah, he’s back in the driver’s seat, for sure.

You know, I’m hyped on that because that took a long time, took a lot of dudes named Hans and Grüber that were just fucking up the program, so I’m glad we’ve got Remilator back on track.
It’ll be good to have you back in the van on the Voltron, Phelper.

Grant, when it all comes down to it, age and experience always pays off. Trust me. It’s been good talking to you. I’ll be in touch with you. You know I’ll see you.
Alright, Jake, talk to you soon.

Love you, kid.
Love you too, brother. Later. 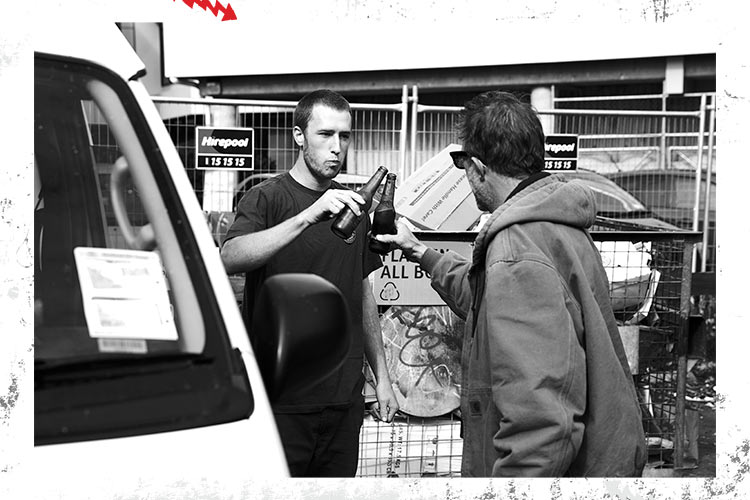