If you were lucky enough to have been skateboarding during the late 90s, you would have been blessed by one of the true classics of the 411VM series: a certain issue number 30. The issue opened with an unforgettable DC road trip segment entitled the “Euro Supertour,” in which each of the DC team riders sported matching blue and orange jerseys as they pillaged across Europe murdering demo after demo like some color coordinated gang. Among the mob was none other than “ollie pop lord” Keith Hufnagel. Fast forward nearly 15 years later and, now the godfather of his own footwear brand HUF, Keith decided to bless today’s generation by conspiring with Thrasher on his own version of the tour: the HUF Stoops Euro Tour. It was a 28 day trip with 9 different stops in Europe. Check out some different angles and some tricks that didn’t get used in the article that’s on stands now. 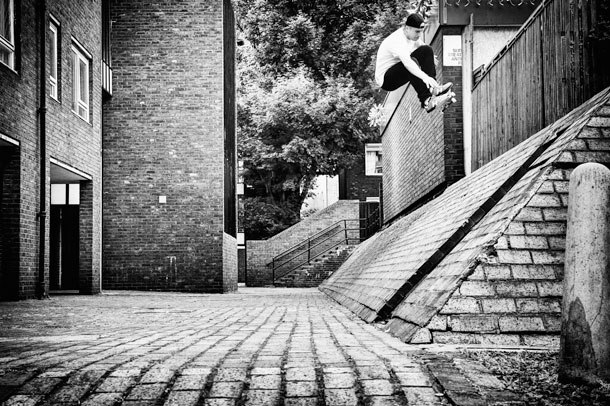 Not to many company owners still get tricks for the article these days. Jamie is the Chief, Renyolds is the Boss. They call Keith Dad, but I bet your dad can't Ollie like this! Another Staple Huf Ollie in a 25 year string of 'em. 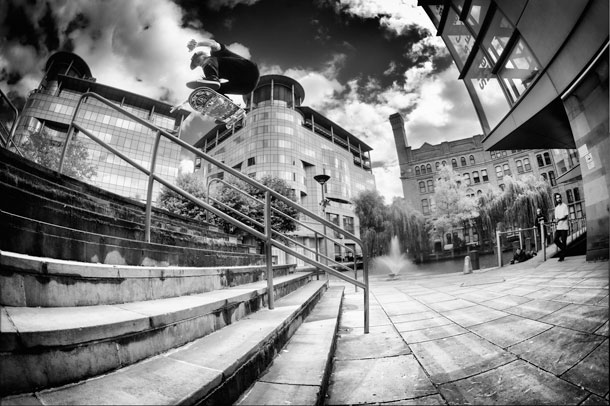 In a city known more for slow depressing 80s and 90s music like Joy Division and Blur than skate spots. Pete put down this uplifting back heel with a quickness.


This is one way to skate a four block. Josh drops a bomb on Ze Germans with this blunt to drop in Berlin. 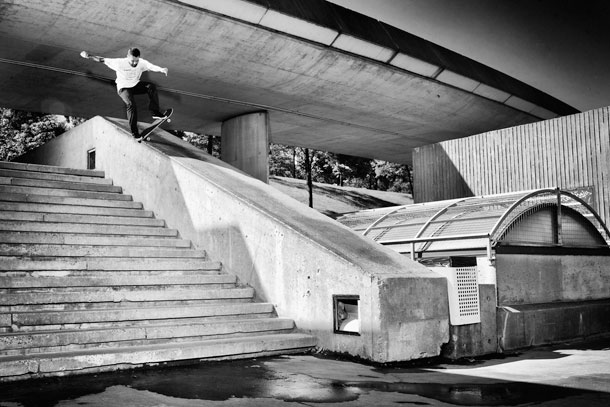 26 days later whooped by life on the road. On the last day at the last spot Plunket ends the trip with a bang with this massive blunt in Montreal. 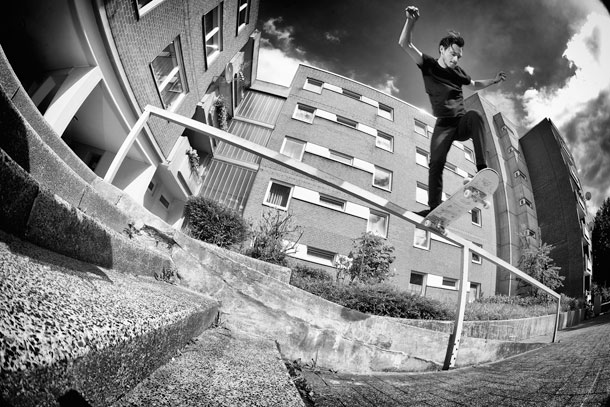 Straight from fashion week in Berlin, after perfecting his blue steel Austyn "Zoolander" Gillette. known for a left turn weakness. Turns right into this back tail. 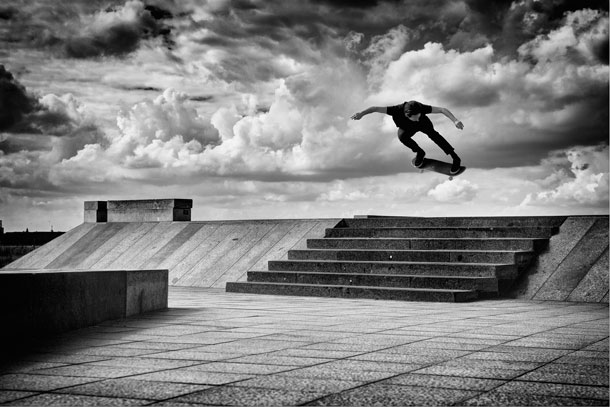 The set of stairs that Austyn Ollied is on an old airport runway in Berlin. It's now a park where people fly kites and hang out. Once upon a time it was Hitlers personal airport. Kind of a creepy spot. 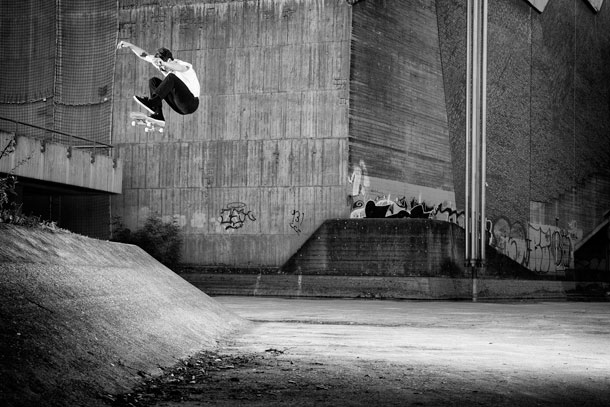 OMG. Don't know where Austyn’s pop comes from. Don't really need to say anything else but, "WOOOW" and insert the 'O' mouth face emoticon. 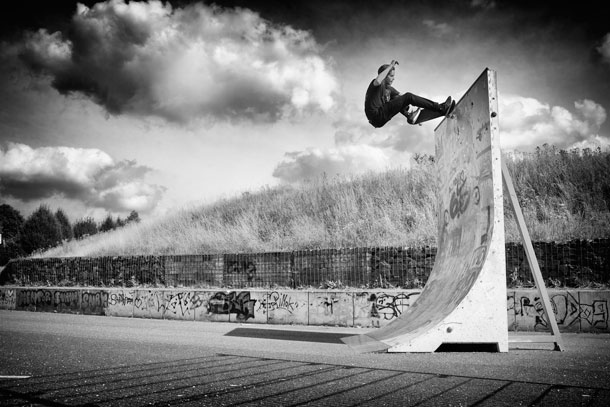 Dylan made something out of nothing with this nose pick on a very awkward and hard to skate metal park in Cologne Germany. 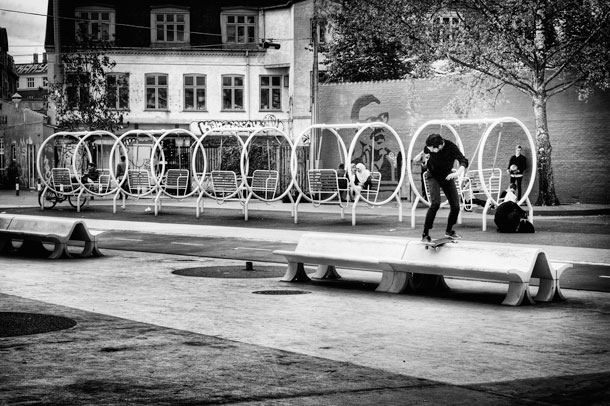 The Copenhagen city planers have started to incorporate skate spots into public areas. Making spots that are not parks but that will hold up to the abuse of boards. Dylan gets a quick back lip on one of these city planed non-skate...skate spots. 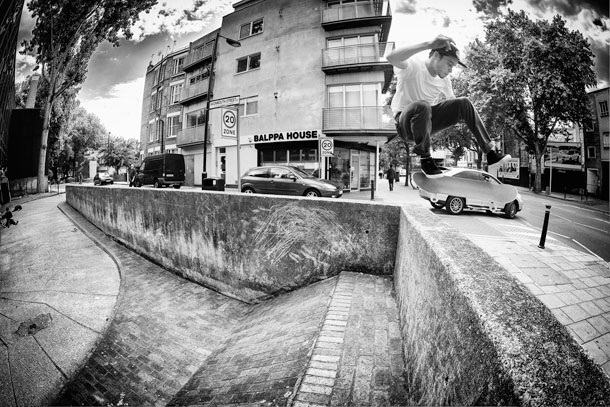 It's not to often you stumble across a natural euro gap, epically in Europe! Brad got to kickflip up and over this London brick lined runway euro gap. 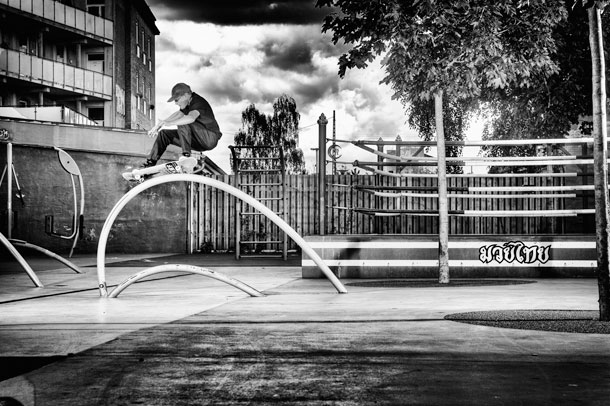 Copenhagen city planers strike again. Where else are you going to find a pole jam rainbow rail without skate stoppers? Not sure if this spot was made for skating but it certainly was made for Kevin to pole jam up up and over. 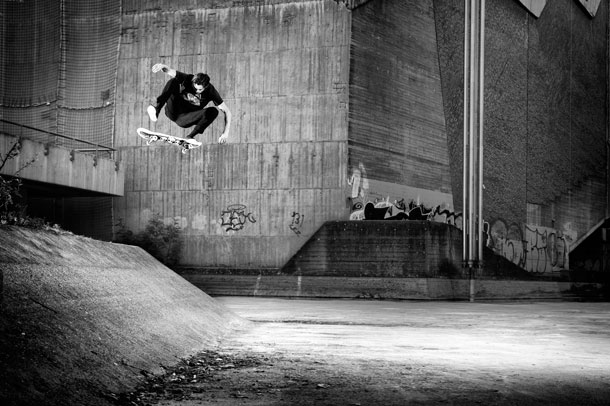 Up, up, and away. Frontside heel in Cologne, Germany. 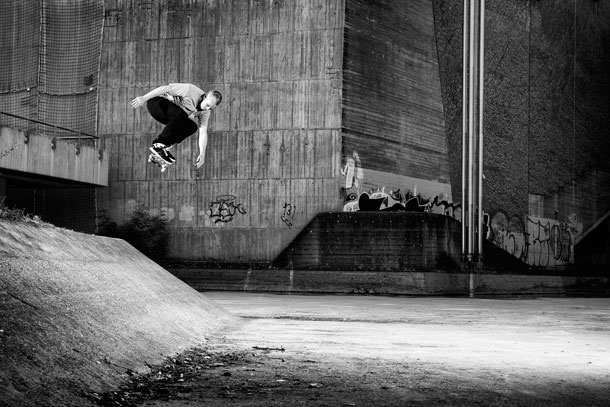 If it aint broke don’t fix it. Huf ollie in Cologne, Germany 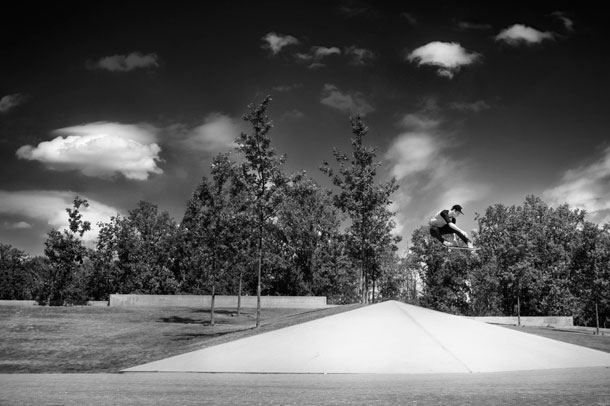 I’m pretty sure Brad Cromer is the guy who gets asked all the time by photo nerds to “do a trick over there” because he makes things look rad. Pretty much what happened on this hip in Rotterdamn. 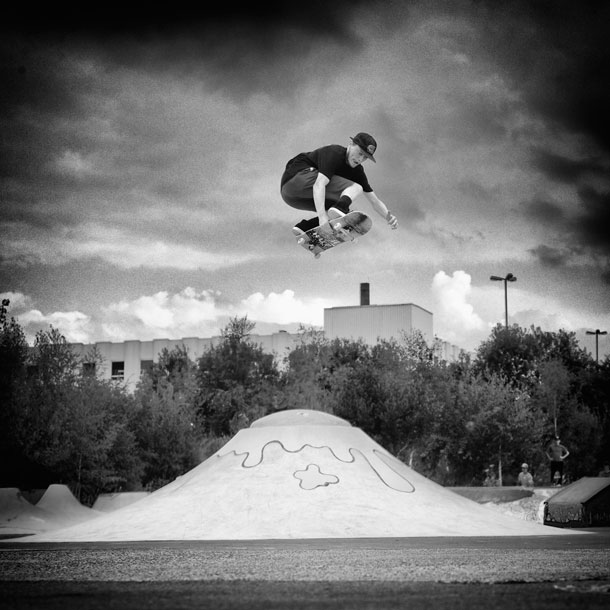 On the way to Berlin from Cologn we stopped and skated a DIY where Kevin got to Melon over some volcano. 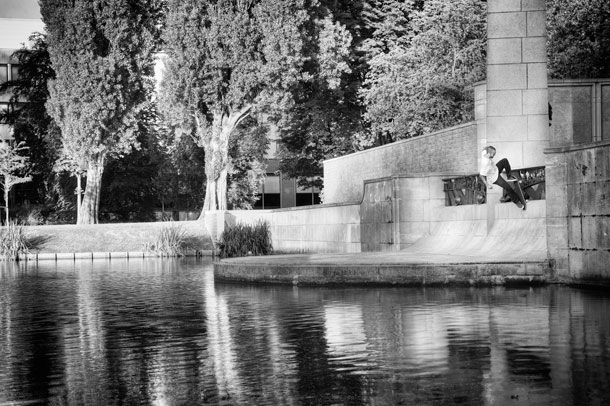 Dan gets blunted to fakie all by himself on a little island in Rotterdamn. 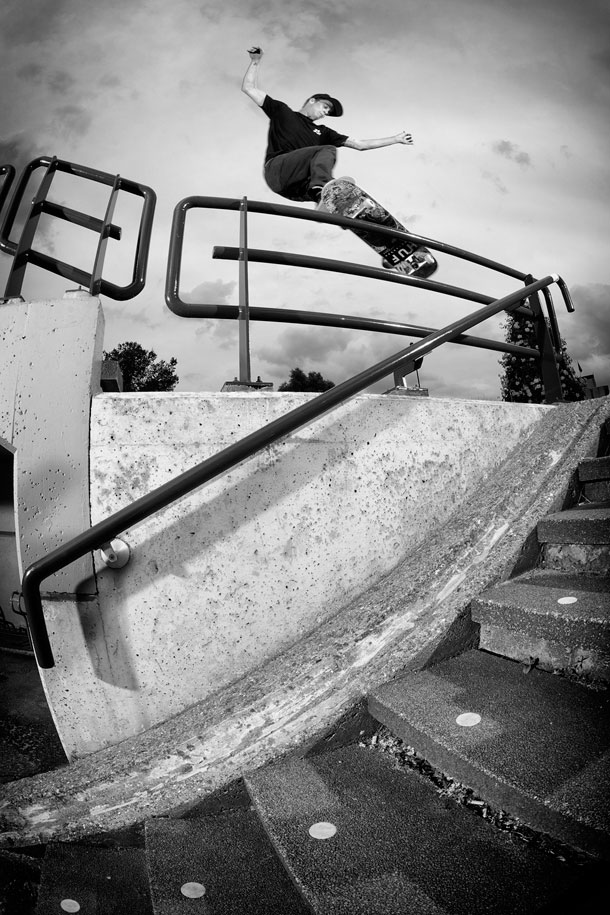 Outside of Amsterdamn Brad gets a smith. 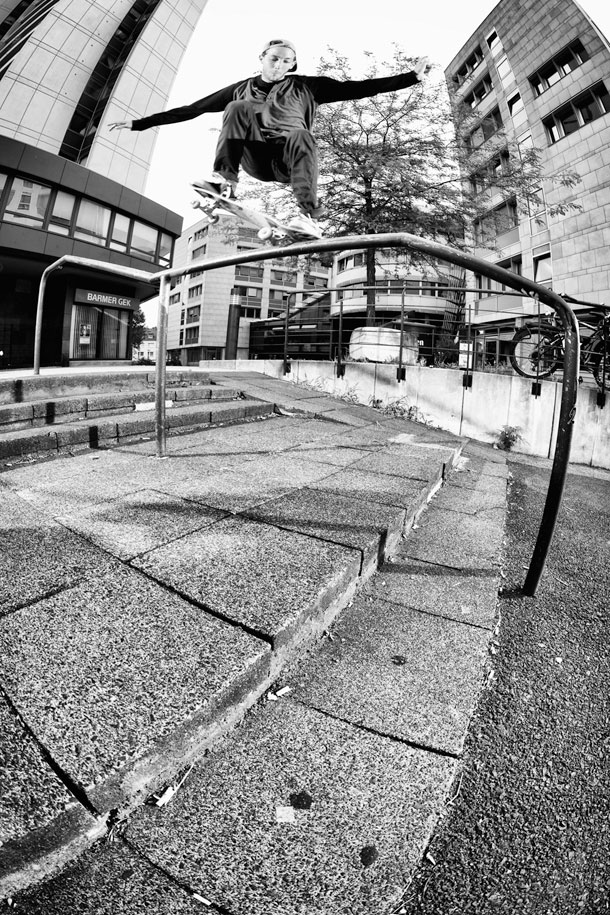 One of two rails we skated on this trip. The Zero team would not of had much fun on the stoops euro tour! Ryan Lay with a nose grind in Berlin (I think) 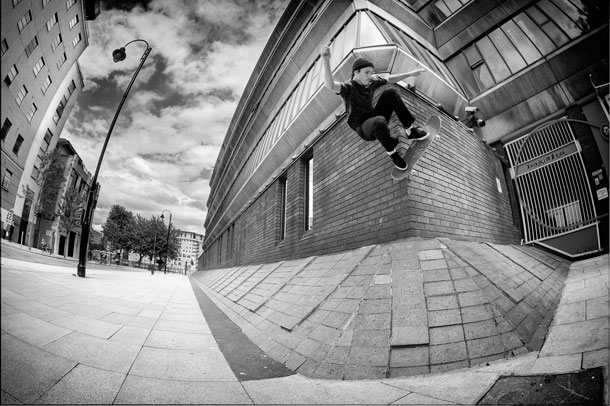 Joey Pepper in Manchester with a hairball wallie around the corner.