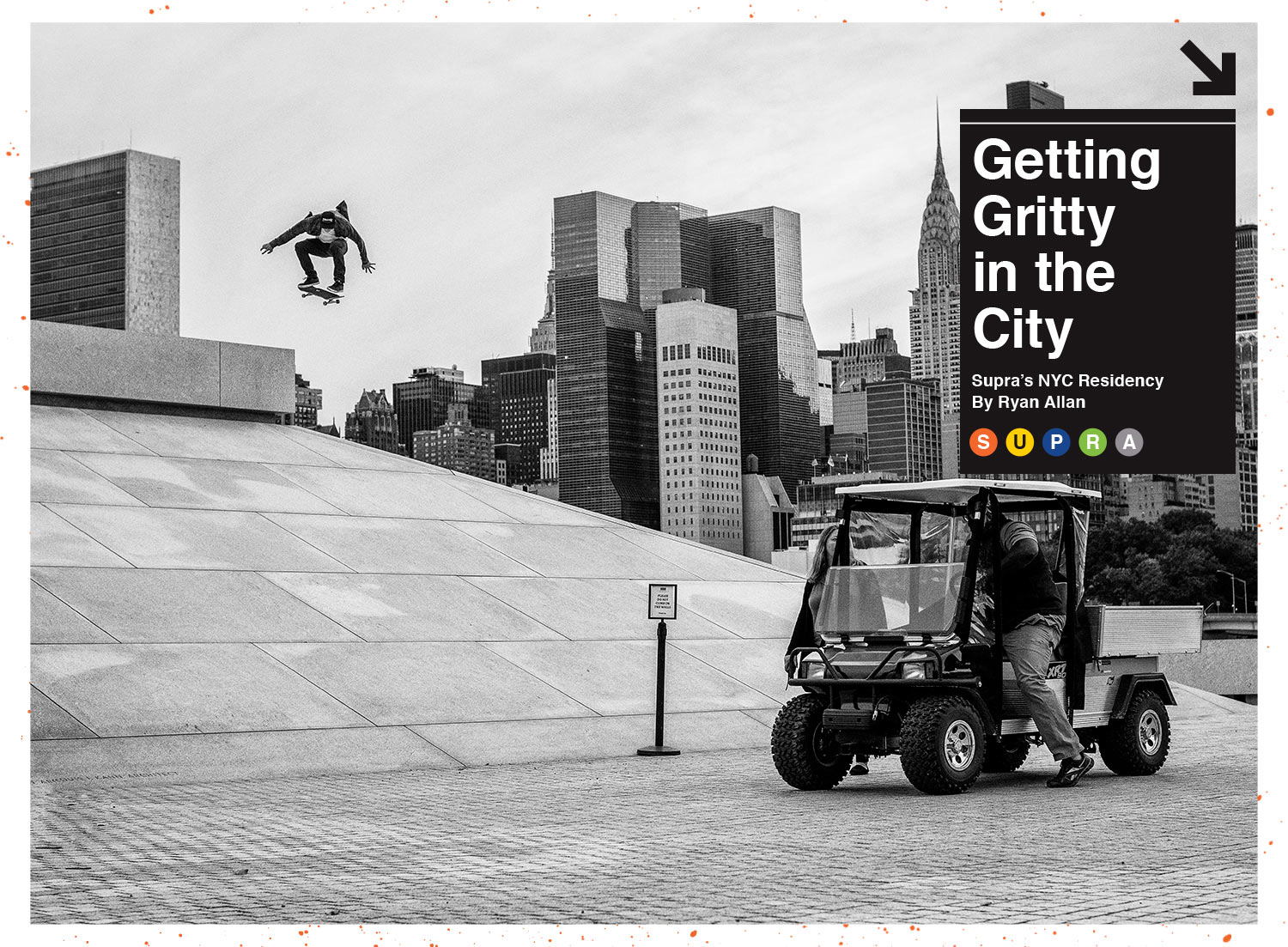 The aftermath of Sascha Daley’s kickflip was chaos. We had barged past the entrance to this monument with a slew of confusing stories for the ticket lady, distracting her as a couple of the guys charged to get their tricks. Police were called and soon the sky was filled with ghetto birds. Seemed like a lot of firepower for some dudes skateboarding. Turns out, the Pope was also in NYC and had just passed by on the other side of the river. We escaped with a half-hearted warning from a very unconcerned cop 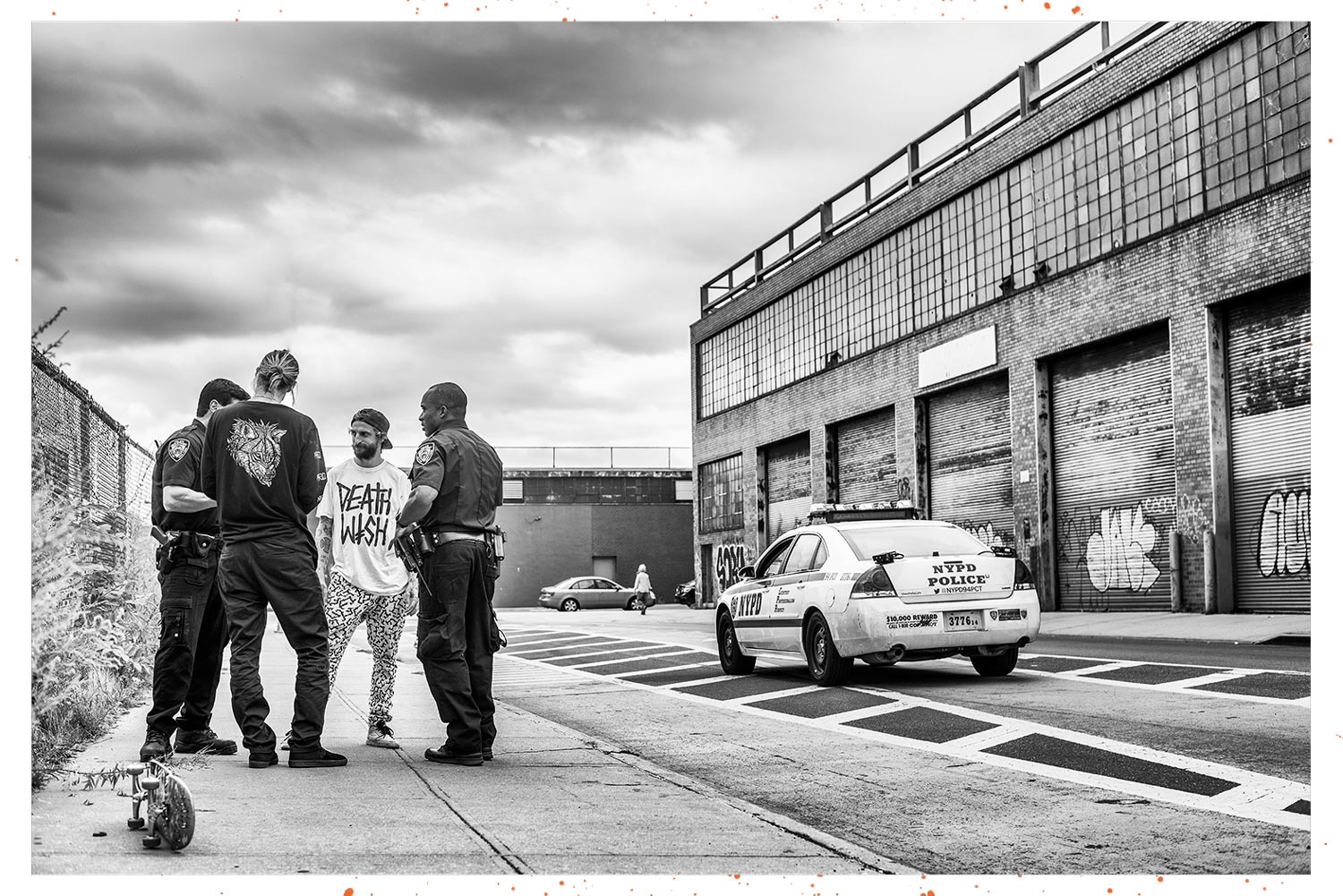 A horn honks, another one follows, then another. Soon every bit of my auditory senses are filled with that horrible and aggressive sound. I step into a deli and wait patiently in line. No one asks what I would like; no one even looks my way. “Bagel with egg and cheese and a coffee—black!” I yell to no one in particular. A voice, thick with an Italian accent, booms back from behind the meat-filled counter, “You got it, buddy!” Walking down the streets of New York City with my tinfoil-wrapped bagel and hot-as-a-motherfucker coffee, I pause and take in the surface beneath my feet: grimy, haggard, beat down by years of snowplows and bad weather. Occasionally I see cobblestone buried deep below the layers of asphalt. Think of the history these avenues posess; the shit they have seen. Sure, these days it’s mostly hipster wives pushing baby strollers, but before all the Starbucks and artisan-chocolate shops opened, this place had stories. Perhaps that’s what makes skating in New York unlike any other place in the world. As you push through this metropolis, you have to look around and appreciate the antiquities you’re surrounded by. Anyone that comes to NYC and complains about the spots being too rugged needs to move on. It’s somewhat of a right of passage for any real skateboarder to get tricks in the Big Apple. Supra was down to get gritty in the City. 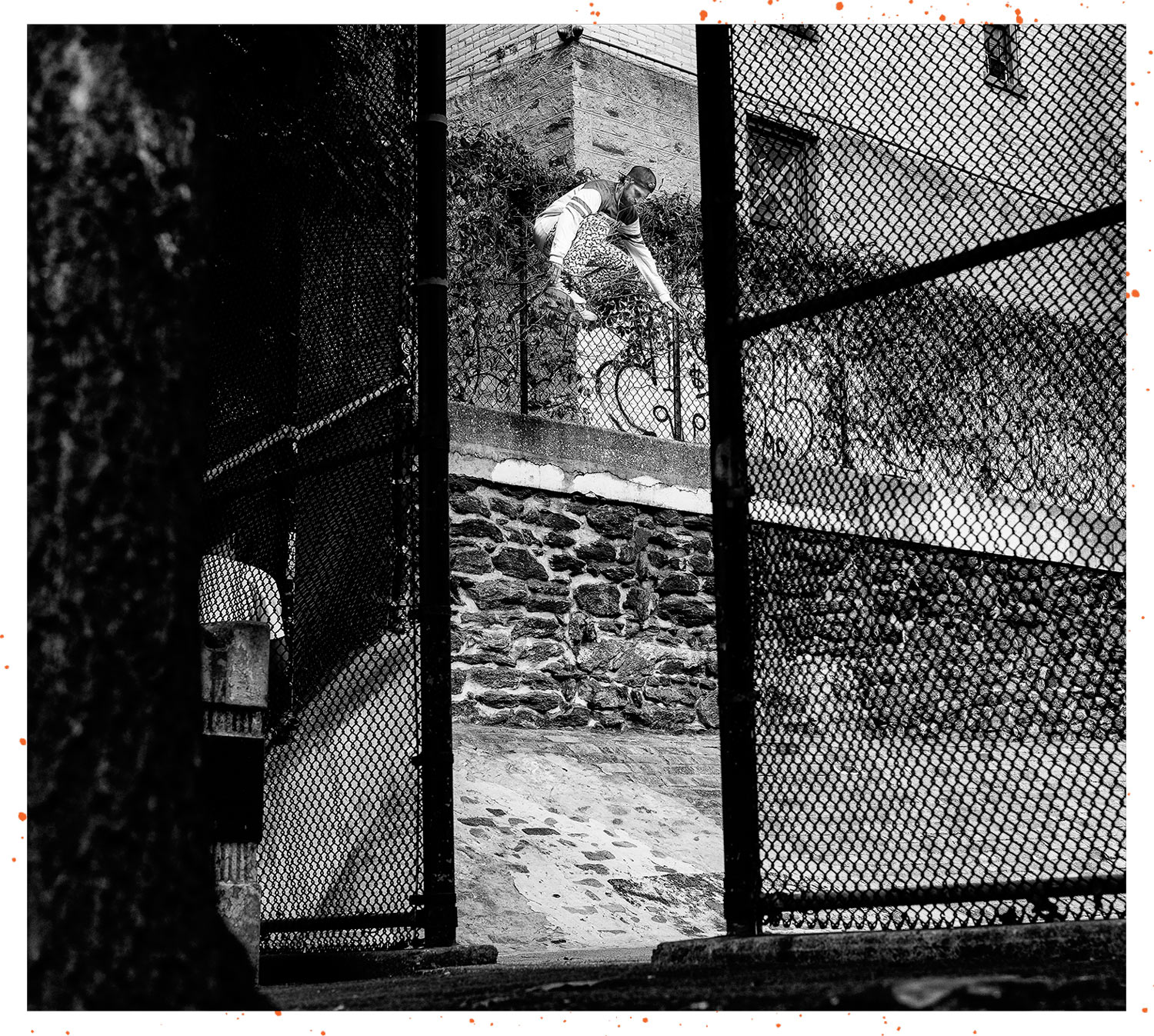 This handball court in the Bronx is packed on the weekends. Lizard knew it would be a nightmare trying to navigate the spot amidst the chaos of kids playing and corner boys hustling, so we went super early on a Sunday. The night before, Oscar Candon and I put back a bottle of bourbon while shit talking at a bar. The van ride that next morning was painful and fuzzy. Luckily, all I had to do once we got there was push a button. Lizard, however, had some serious work to do. Ollie into the crust 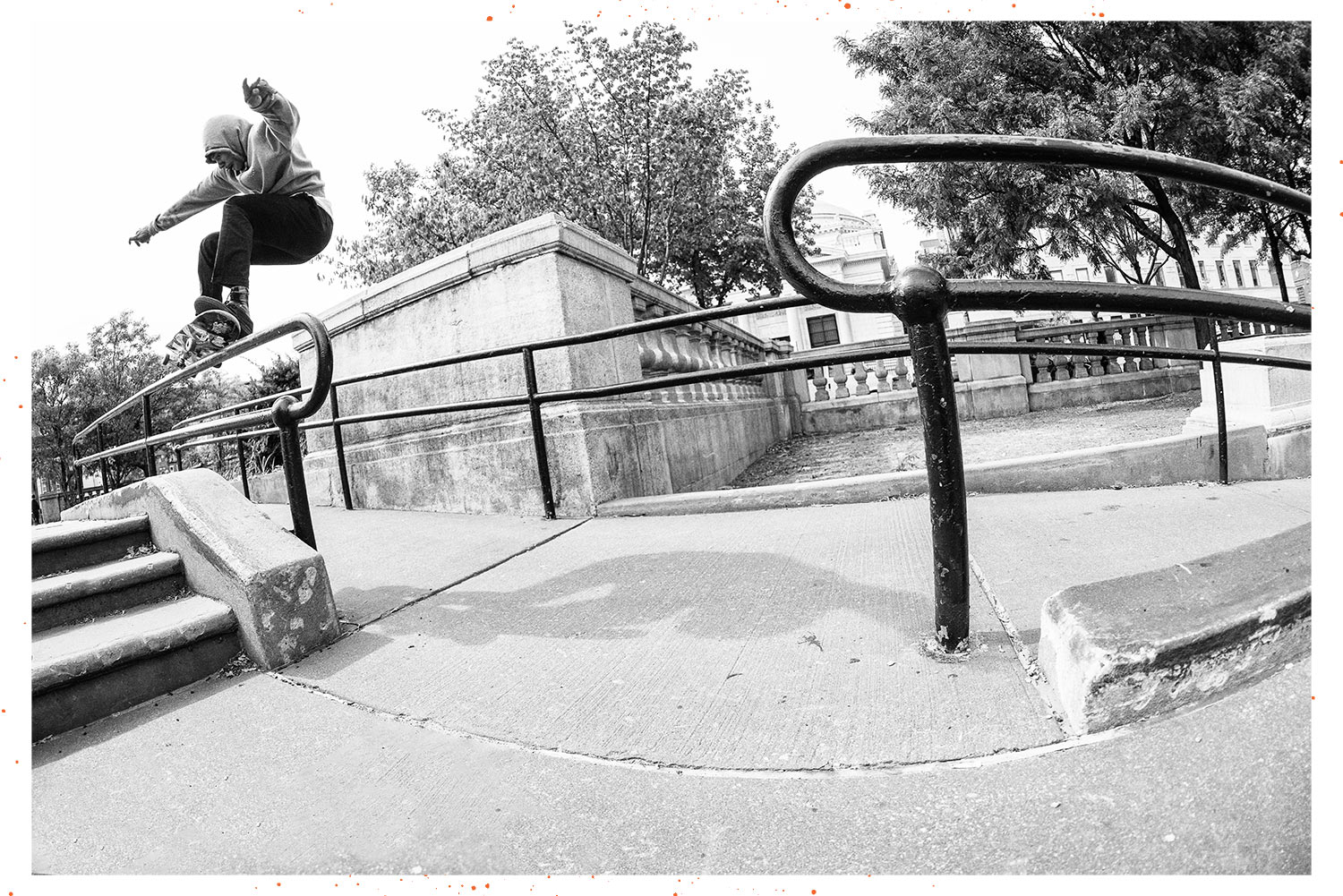 It’s easy to get stuck at this plaza in Williamsburg, so I wasn’t too excited to hit it on this particular morning. But I had no idea that Boo was considering grinding up this rail versus the usual gap-down option. The kid really knows how to get up there and he took the 50-50 all the way to the end. We were still there too long, though 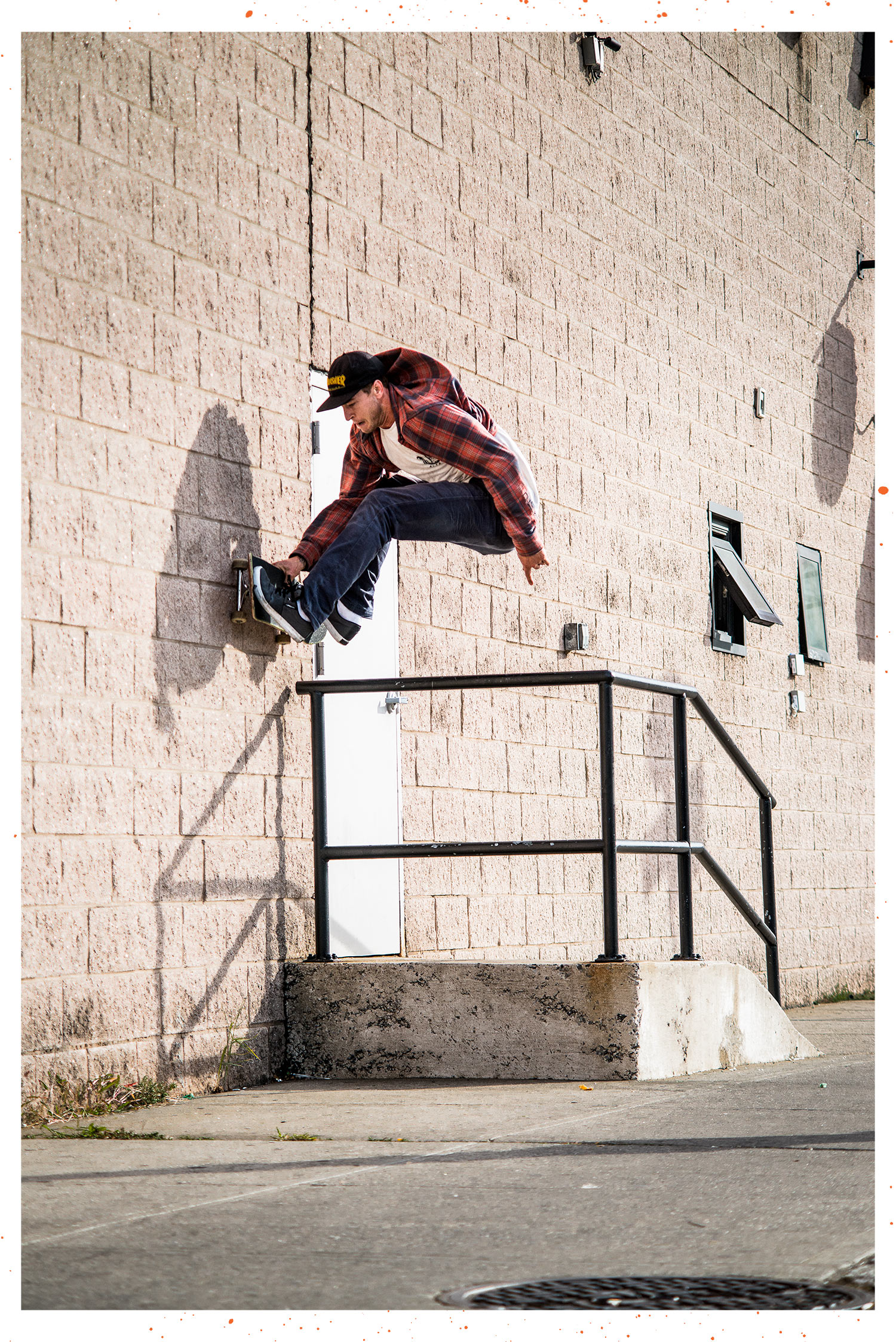 This bump to bar is conveniently located near a coffee shop. I wasn’t even able to finish my vanilla latte before Sascha rolled away from this wallride yank out. Ah, the real life struggles of a modern skate photographer

There was a wild scene going on when we pulled up to this spot in the Bronx: out-of-control kids were running around everywhere, unsavory lurker types were abound and an older guy with a full velour outfit and a booming sound system was blasting hip-hop and funk jams. Oscar started sizing up a switch frontside bigspin and I’m not sure if the guy was fucking with us since it was a predominately white crew, but he threw on Eminem’s “Lose Yourself” at full volume. Oscar, who apparently knows the song by heart, says to him, “Okay, this try. You only get one shot!” and lands the trick that try. Thanks, Marshall 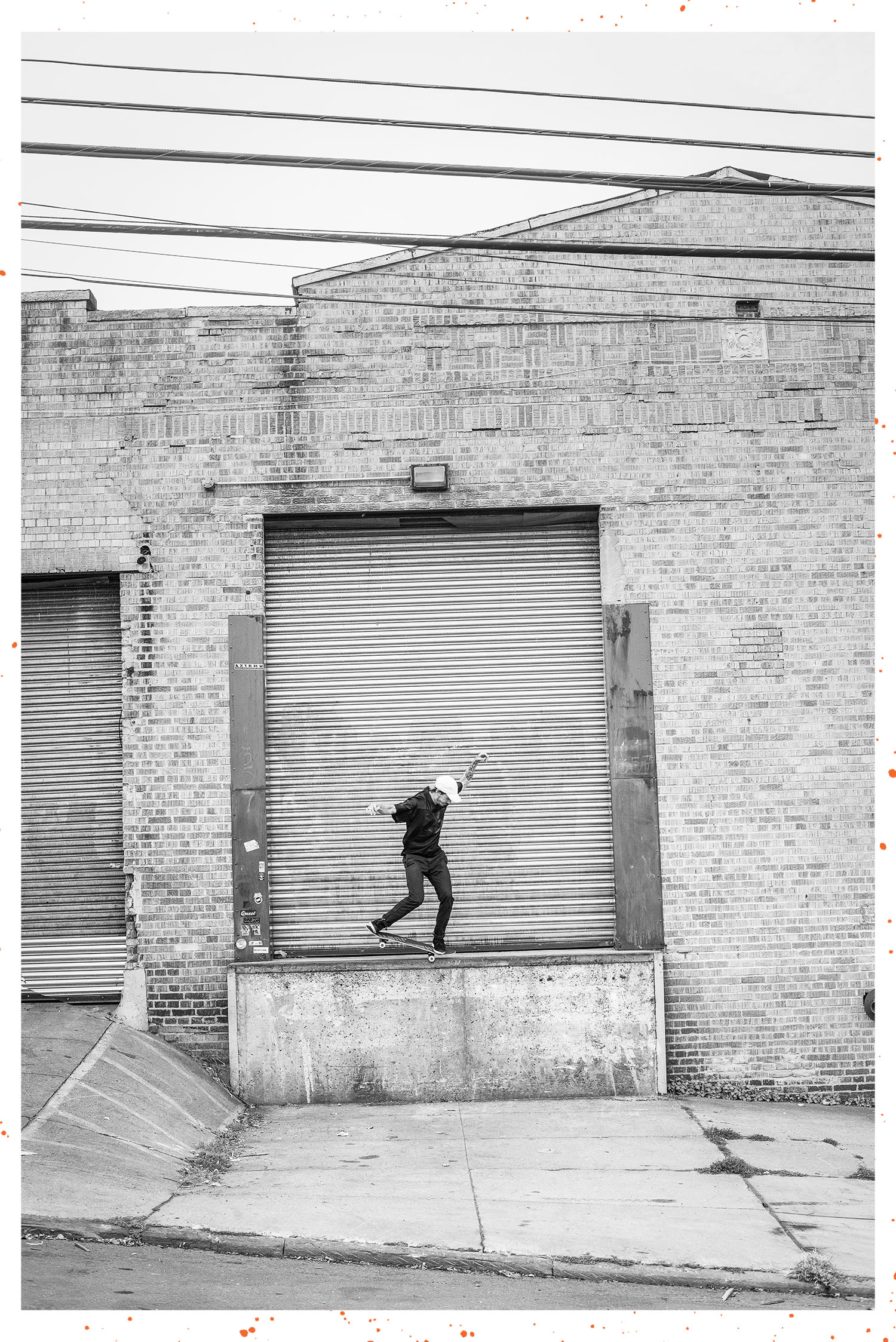 Dane Vaughn’s gap to nosegrind on this loading-dock ledge was scary to watch. You can’t tell from the photo but the spot is on a pretty steep hill and just watching him roll up was sketchy. So sketchy, in fact, that a passing driver, who was more focused on watching Dane than the road, jumped the median and jacked up his ride. “Those damn skaters distracted me!” we heard him tell a gawking pedestrian 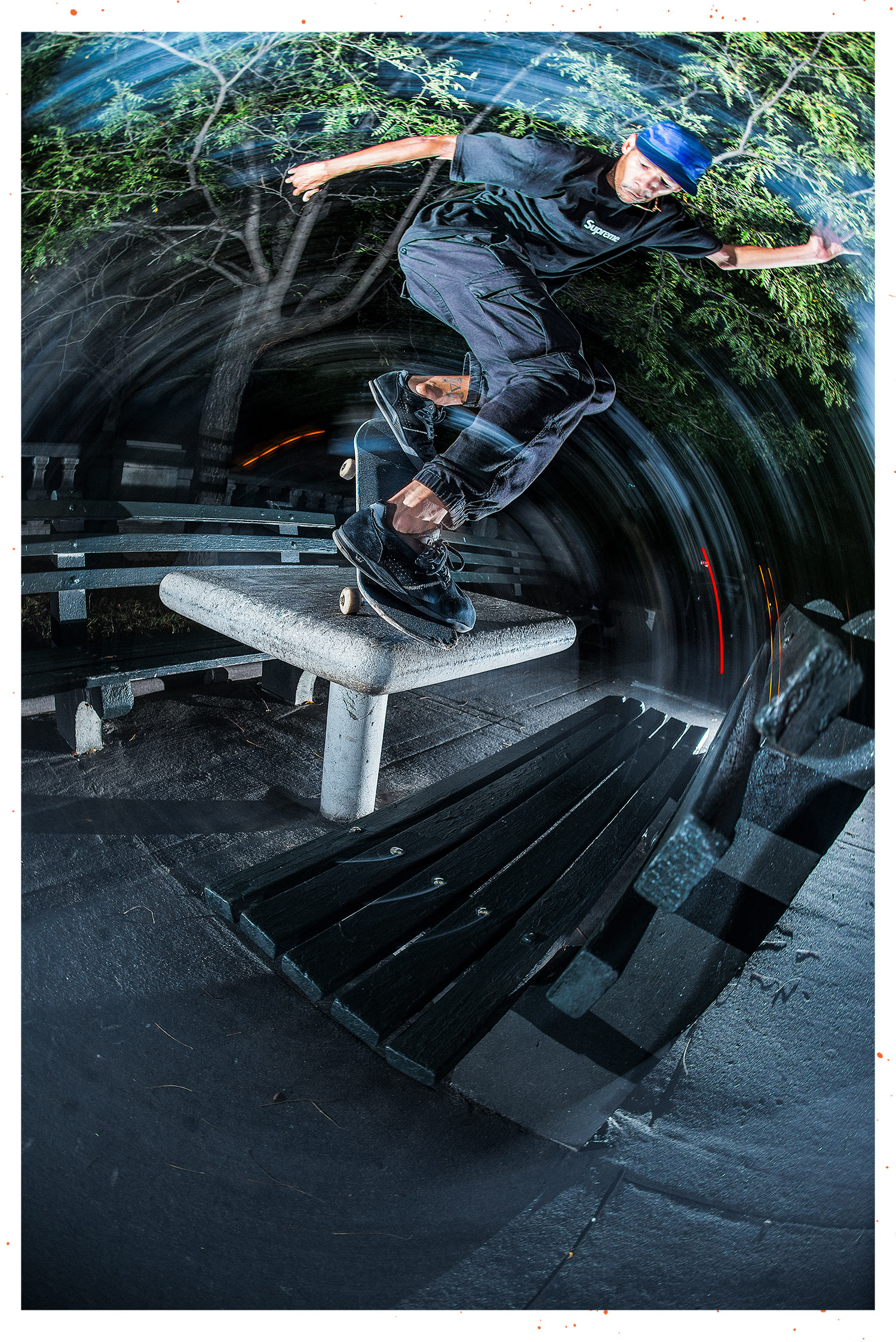 See? Here we are back at the same damn park as Boo’s gap to 50-50. You just can’t escape this place. Lucien Clarke wanted to pay homage to The Muska’s legendary noseblunts, but he put his own twist on it and went backside. I meant to ask him if the cargo pants were also part of the homage

Remember those artisan-chocolate shops I mentioned? Well this gap’s landing is directly in front of one: Mast Brothers Chocolate. I love the stuff and when one of the owners was leaving for the day, he mentioned how impressed he was with the guy’s tricks. I told him I was impressed with his chocolate. He went back in the store and grabbed a bar, handed it to me and said to give it to whoever made the next trick. Dane might not have gotten the treat but he did get this nollie tré. Not a bad consolation prize 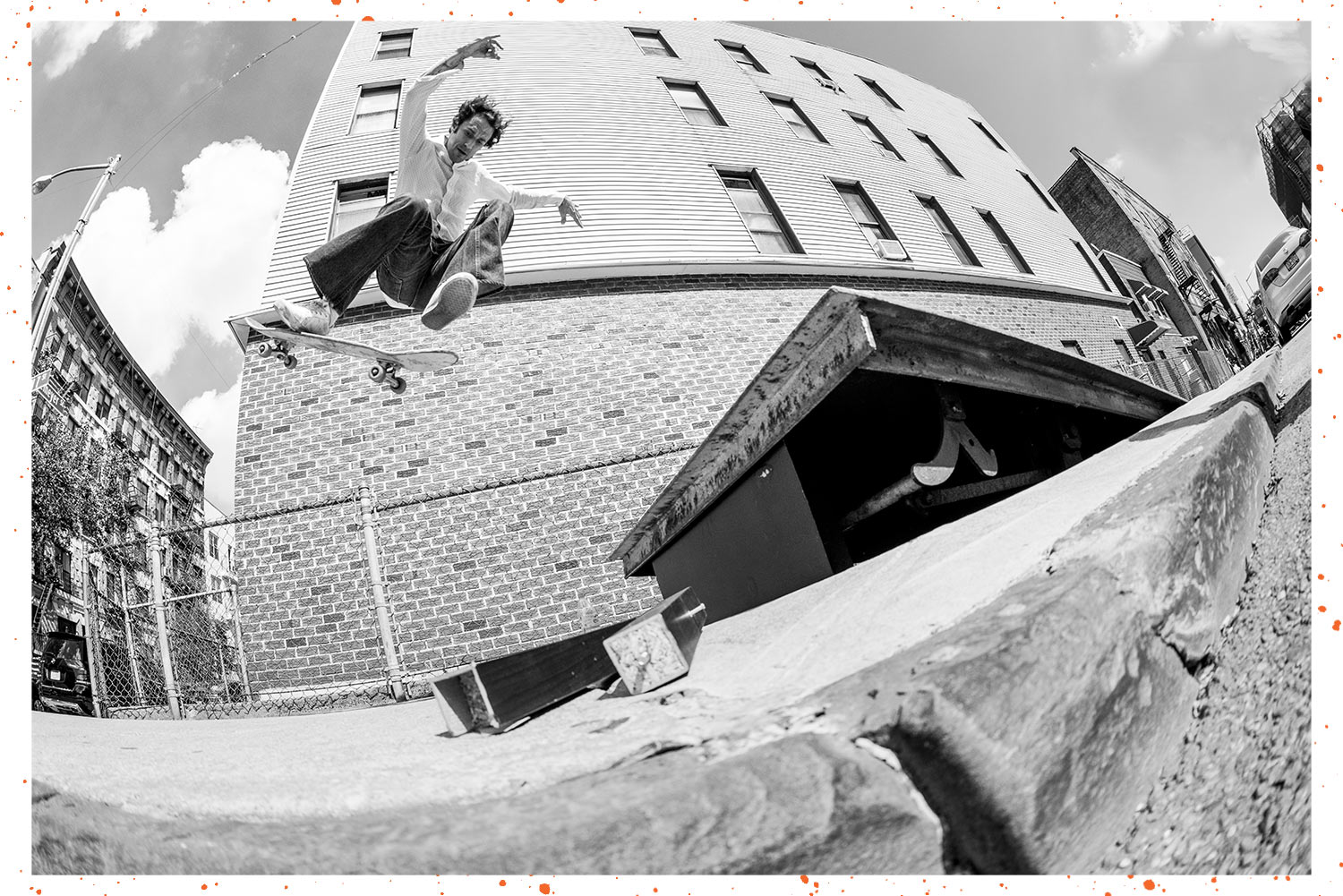 Jim Greco owns varying degrees of bell bottoms that he brings out for different occasions. On this backside 360 he felt the “moderate bells” would best assist him with a smooth rotation and wouldn’t engulf his shoes (which might distract him). I think they picked up just the right amount of wind, too. Good choice, Jim 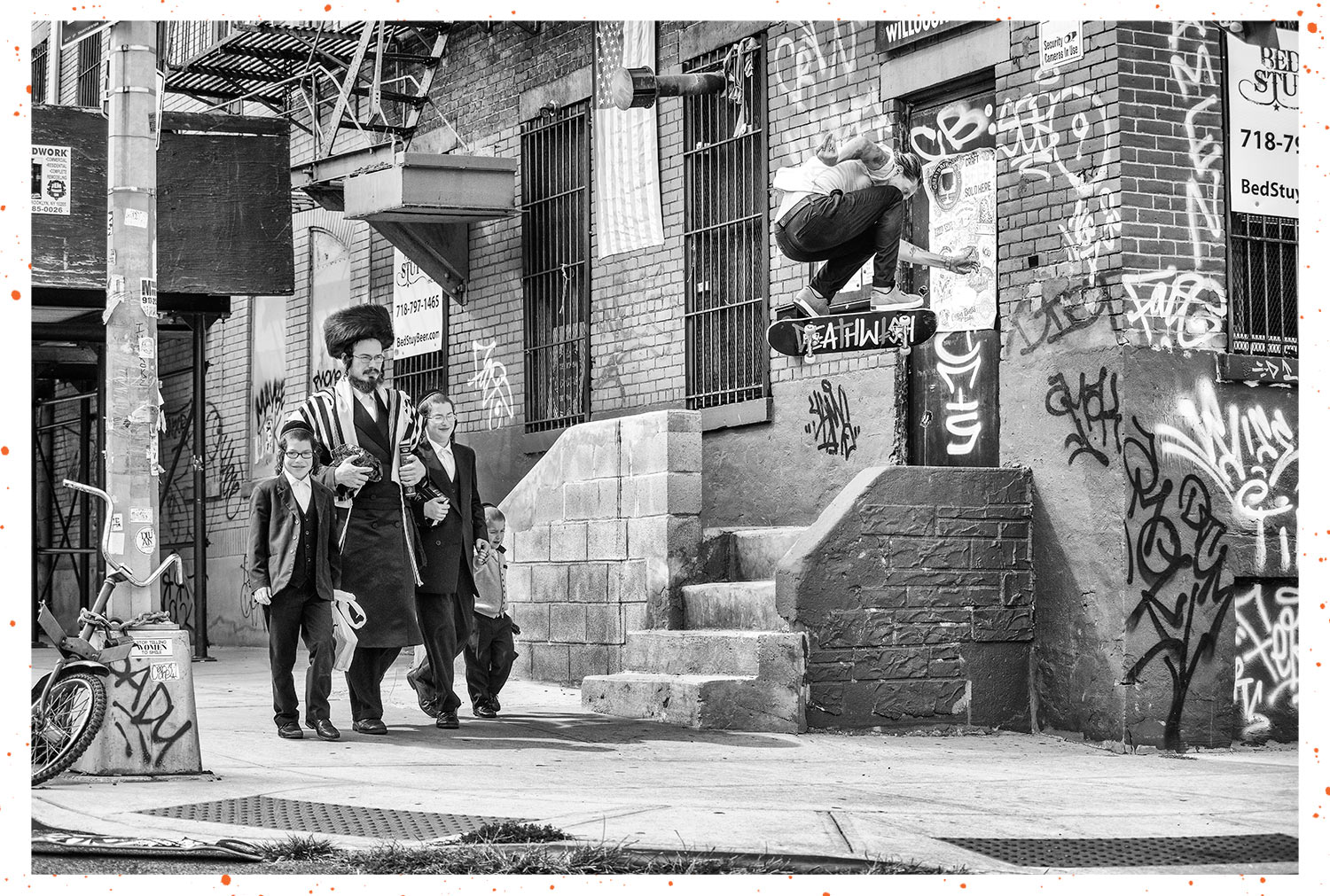 This amazing spot that Ellington is hardflipping is in a Hasidic neighborhood in Bed-Stuy. As a photographer, I get really excited to shoot photos in this area because you might get an image like this. Maybe it’s exploitive, but you can’t deny that a shtreimel (traditional Jewish hat) can really spice up a skate photo. To top it off, this building is a beer store and the owner has a brother that skates. He was stoked on us and told us when we could ride hassle free. We repaid his kindness by making numerous purchases from his establishment—although we probably would have done so anyway 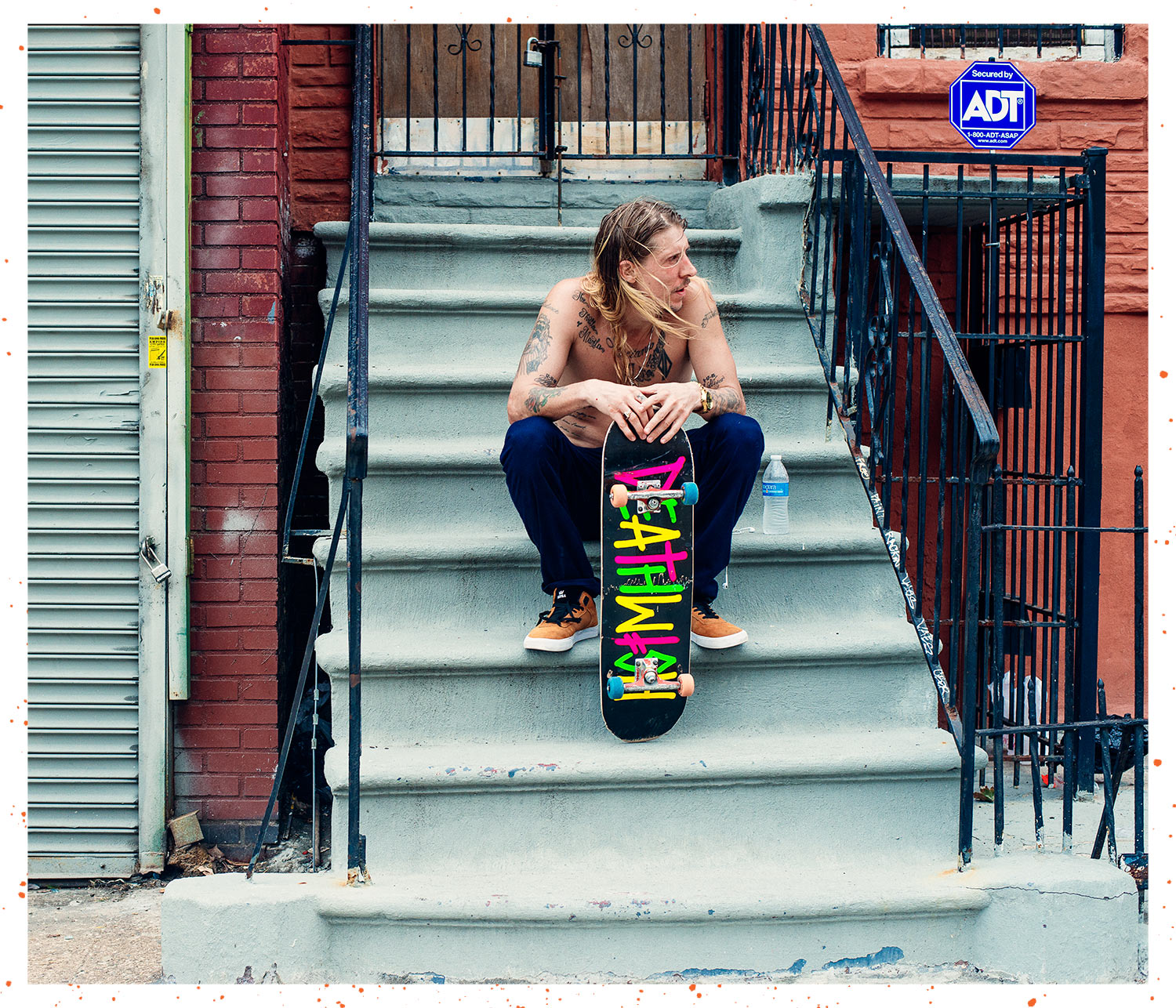