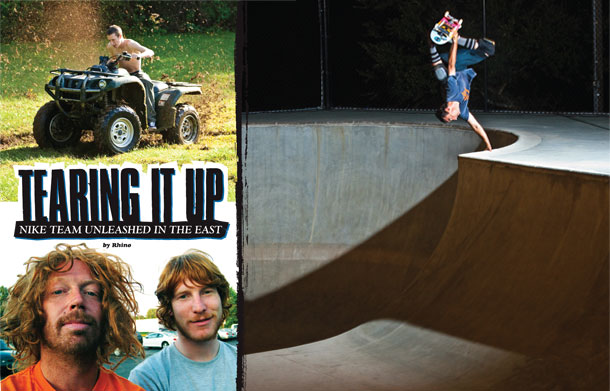 It all began in Philadelphia, the second half of the tour for a new video that Nike just finished up. Nike trips are like winning the lottery, at least the skate version of it. Four-star-plus hotels, room service whenever, bar tabs billed to your room—or anyone’s room, for that matter—and surf and turf on the menu. If you want two, feel free. But know how to take care of business. The demos were packed with 1,000-plus spectators, ripping by the whole team, and poster-signing lines that lasted for three hours. Two vans and a trailer for the equipment, and skating going down in the street until the crack of dawn.


This banked landing can eat you alive. Cory Kennedy comes out unscathed after a bigflip

Koston, Childress, Justin Brock, Elissa Steamer, Lance Mountain, Grant Taylor, Wieger Van Wageningen, Lewis Marnell, Dan Murphy, Shane O’Neill, Daryl Angel, Dan Plunkett, Ishod Wair, Cory Kennedy, David Clark, Todd Jordan, Danny Supa, Clark Hassler, and John Motta were on my leg of the trip. Oh, and let’s not forget Indy, Dan Murphy’s counterpart. I think Indy even got his own bed and per diem. Philadelphia, down to hot Miami, and up to Houston, TX. Two weeks, a lot of skaters, and a lot of miles. Somehow my bar tab was $375 in Miami one night, but it could have been Childress’. I don’t remember. 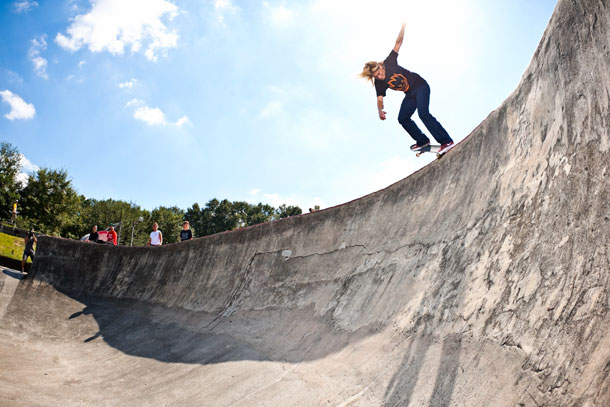 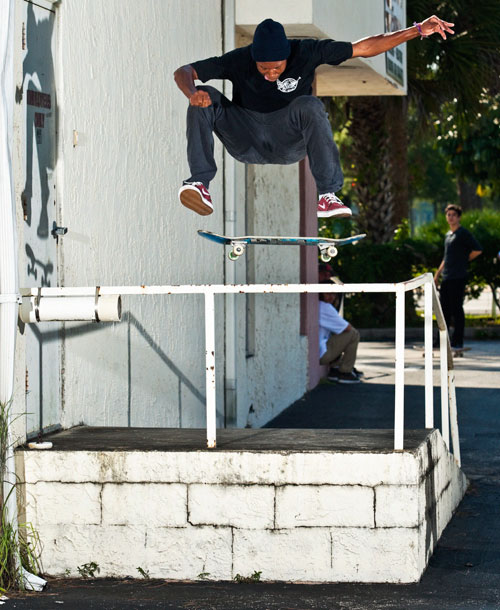 We checked into a Virginia hotel, and a few guys left for a night on the town. Next thing I know Childress is waking me up saying the police want us out of there. What could possibly be going on? We’d crashed out at about midnight after a few beers. I guess Justin and a few others came back to the hotel kind of hot, wrestling in the hallway—whatever. Some guy came out of his room with his chick and told them to chill out. The thing is, he had a box cutter in his hand and was swearing at them. Justin was telling him to put the box cutter away and go back to his room. It was pretty loud, and the next thing you know the police showed up and were trying to get the story straight. The hotel guest hid the box cutter and denied the whole thing, so the cops focused on Justin. I wasn’t there, but according to Wieger, Justin bumped the cop on accident when the cop was telling him to take his hands out of his pockets. When that happened, the cop arrested him for assault on a police officer. Bullshit. Wieger had the whole confrontation filmed on his iPhone with the box cutter showing, but the police arrested Justin regardless. Damn, you’ve got to look out in those small Southern towns. Justin wasn’t supposed to leave the state after being released on bail, but next thing we know Justin’s with us driving through North and South Carolina, Georgia, and even down to Miami. He didn’t skip a beat, still ripping and having a good time.

Making half-Cab bluntslides look like a breeze, Justin Brock shows how it's done

Five Things You Should Know About Indy

1. Dan doesn’t bring dog food on trips. It’s all table scraps and what’s on the floor of the van.
2. Indy’s traveled on hundreds of flights. Next year he’ll be traveling to Spain, since they allow dogs without a long quarantine.
3. When checking into a hotel that isn’t dog-friendly or costs extra for pets, Dan has a gym bag that Indy rides in. Dan walks right into the hotel as if he were carrying his luggage.
4. Also, when traveling on airplanes, Dan will sometimes avoid the high cost of an extra ticket (about $75 to $150 for Indy) by just barging it as if he did have one. Once on the plane, Indy chills in the carrier by his feet for the whole trip. He gets caught one out of five times.
5. No leash, no fleas, no complaints, no problems. Indy’s easier to travel with than some skaters. He might even get more coverage, too. 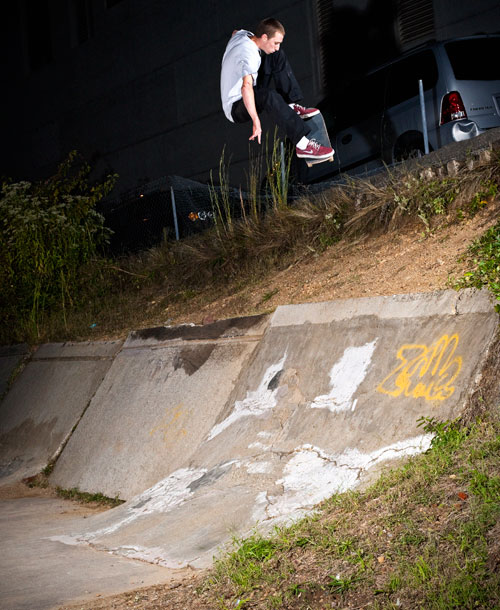 Like surprises? Wait until you hear that this Grant Taylor mega-floater is a noseblunt. We're just as amazed as you are

On one of the rainy days in Philly we decided to go to Bam’s compound, because we’d heard he had a new indoor skate facility on his property. And you never know what’s going on over there—some crazy party, naked chicks, tons of beer, or maybe some midget skating the mega-mini in the rain. Who knows? We rallied about an hour outside of Philly into the countryside. 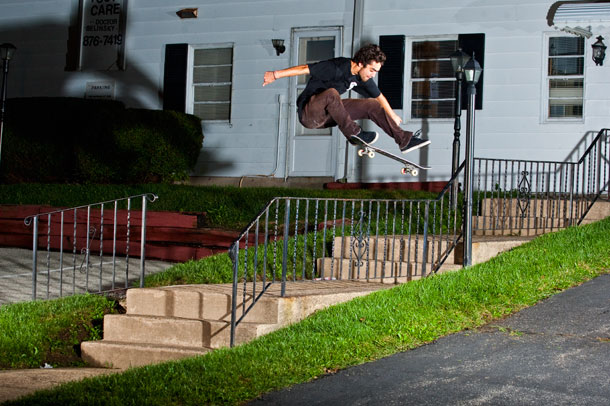 An underground favorite, Dan Plunkett is on the rise. Frontside kickflip involving a bumb, bar, and two parking lots

As we arrived, the gate to his property opened, we pulled in, and there was a new warehouse with a full indoor TF that Bam and a few of his friends were skating already. The Nike crew started hitting it up and having a good time. A few of us cruised around the property and opened a few doors to the garage for a look at the cars. We checked the bar by the pool for some cold brews, walked around on the mega-mini, and wished it was dry out. Bam even gave Childress permission to enter the house and take a deuce without anyone accompanying him. Imagine, would you want Luda Crooks up in your crib solo? Didn’t think so. 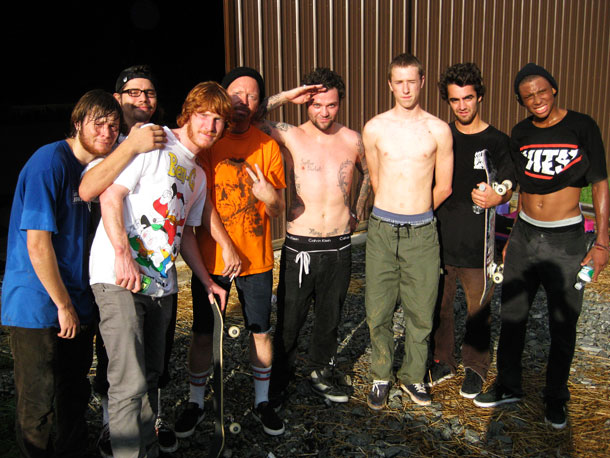 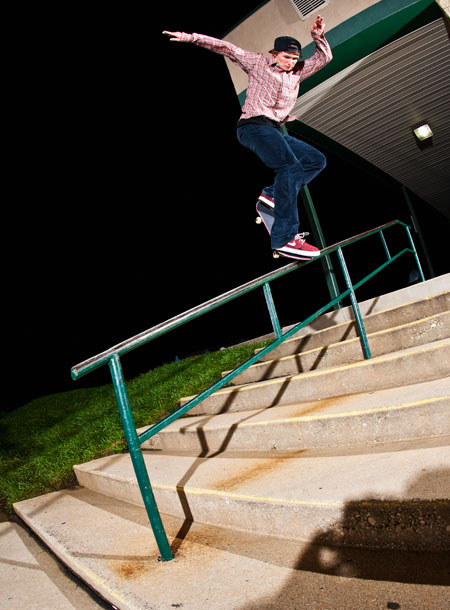 A millisecond before contact, Shane O'Neill hovers above an eye-pleasing backside noseblunt

Grant Taylor was ripping the TF when he spotted a four-wheel off-road quad. I guess he’s been riding dirt bikes back home a bit, so he asked Bam if he could take it for a spin. Grant’s apparently a natural on pretty much anything that has to do with speed and danger, as you can tell by the way he skates. The whole backyard of Bam’s crib got torn up. Bam was skating the whole time and didn’t notice, but the wet, freshly-mowed grass was looking like some army tanks drove around on it. I doubt that Bam even cared when he finally did take a look at it—we all know he’s done worse things himself. My whole plan was to get Childress to ride the quad into his swimming pool and blame it on his crooked arm, but the wager wasn’t high enough. Now that I look back, I should have ran it by Grant for a six-pack.