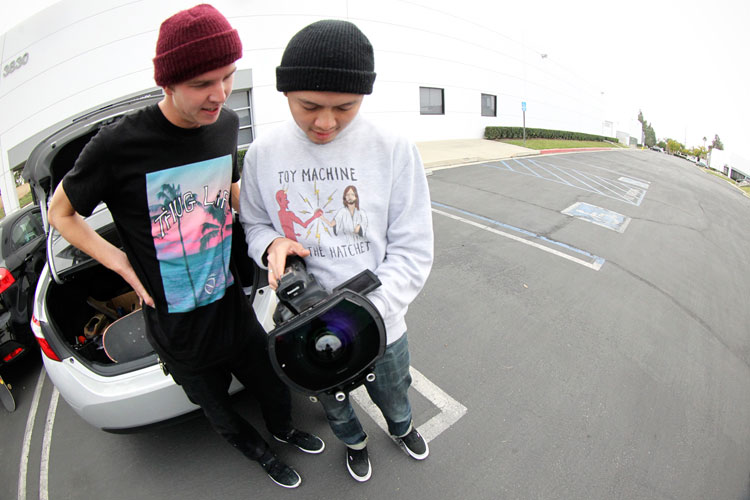 With a name like Braxton Powers, he was either meant to be a stunt man or a James Bond villain. Judging by how natural he looks on a handrail I don’t think he's going to be giving Bond problems any time soon. We caught up with Braxton to discuss all things Extra Crispy. —Ben Karpinski

How old are you and where are you from?
I’m 25 years old and I'm from Riverside, California.

Where are you living these days?
I live in Highland California. Right at the base of Big Bear. 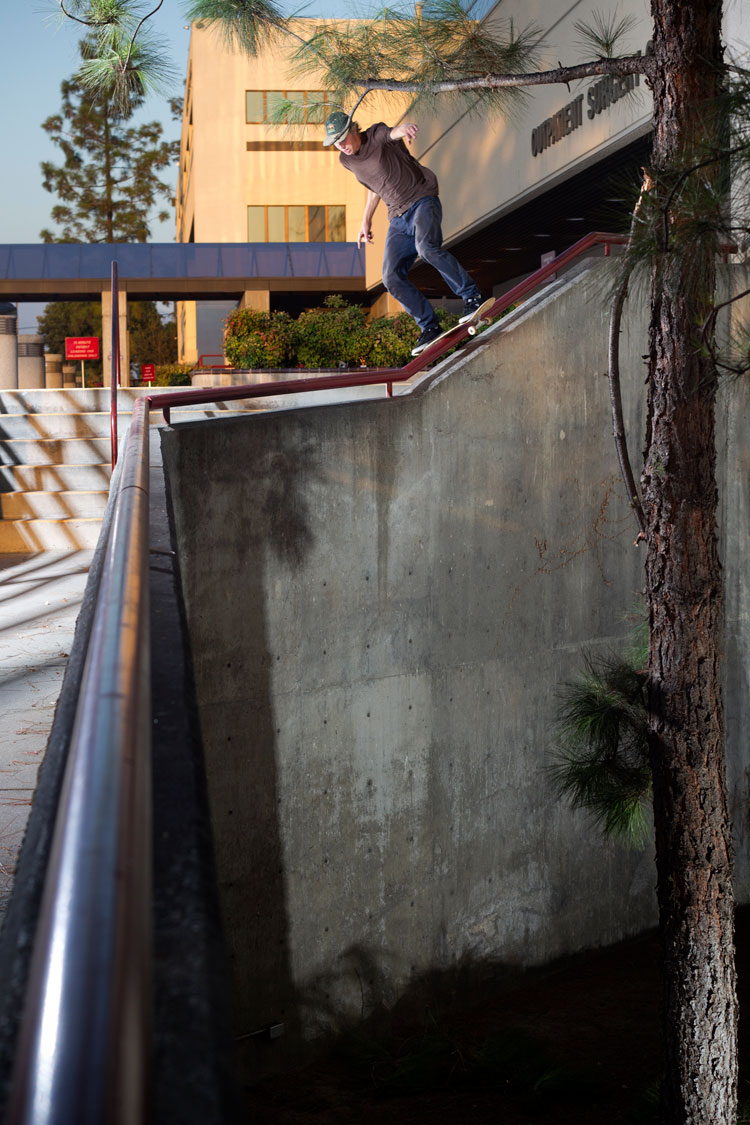 What type of name is Powers?
I’m not too sure. But my parents told me we have a bloodline that somehow ties into the Queen of England.

Any relation to the New York skater who hates lobsters?
No, not at all. 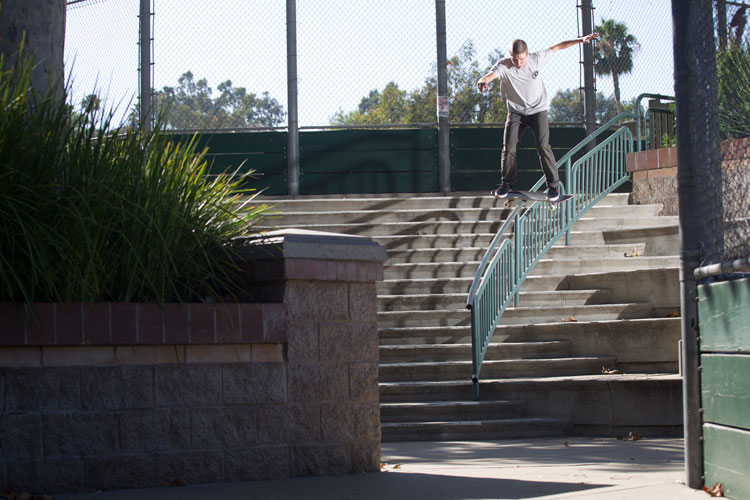 Boardslide through the curve the hard way   Photo: Karpinski

How do you find all your spots? Google maps? Friends? Secret, private skate-spot Instagram accounts?
Not secret Instagram accounts. I mean, some people post their spots right on Instagram and, well, thanks for that, guys. But mostly it is just taking different routes home and always being on the lookout.

You seem to be sort of the guy people hit up looking for spots in the Inland Empire. Do random teams ever hit you up?
I wouldn’t say teams, just a lot of different groups of friends. As long as people are cool I don’t mind showing anyone spots. 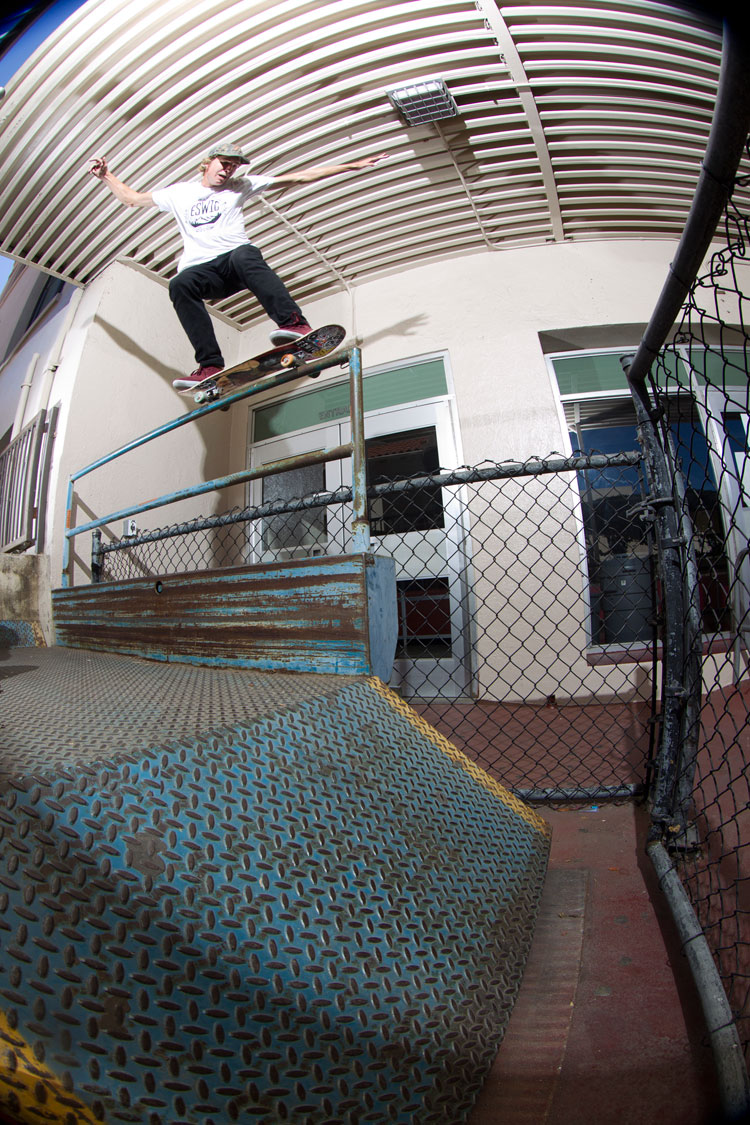 You know Anthony Clarvall used to make good money charging teams to Sherpa them around China. You ever think of doing something like that?
Seriously?

Yup.
Wow. I have to look into that one.

Why do some of the guys call you Craig?
I met up with some of the guys in Palm Springs while they were staying for the weekend for a Neff photo shoot and wound up drinking a bunch and somehow my middle name came up and it just stuck. 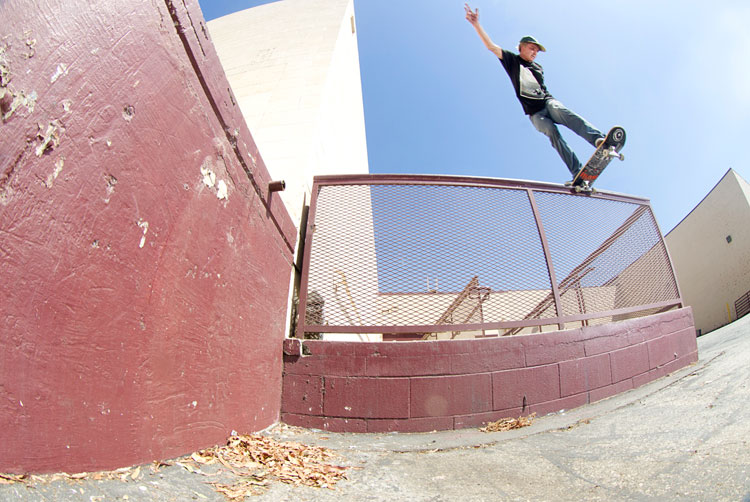 You thought the Hall of Meat was the end? Braxton hits back with a back tail   Photo: Karpinski

Is this your first part in a company video?
Yeah, first time.

Straight to last part. Not bad.
Ha! Thanks. 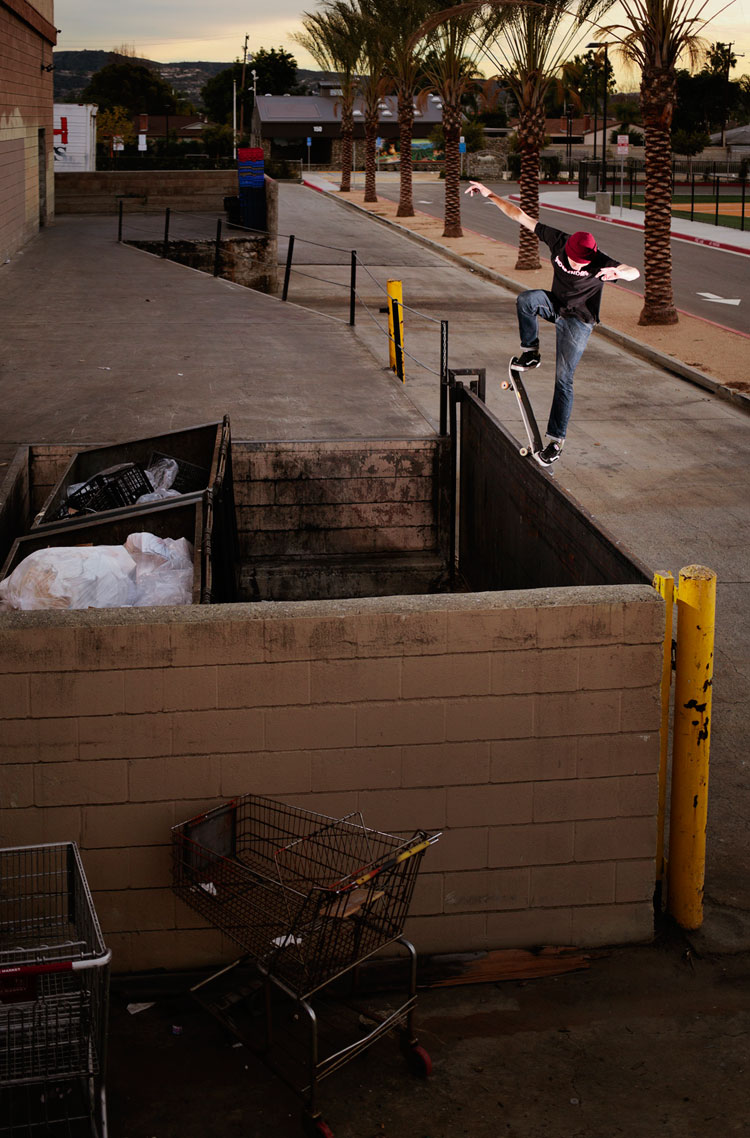 How long did you film for it?
Like, three years? I didn’t know about the video until about six months ago, though, but it is about three years' worth of footage.

What was the hardest trick in the video for you?
Probably the back 5-0 on the Brooklyn 16. I told Don I wanted to try it but was a little nervous, so I went to do it on the 11 and just missed the rail and died. Then I went to try it again and the same thing happened, so I figured if I am taking these slams I should just try it on the big one. 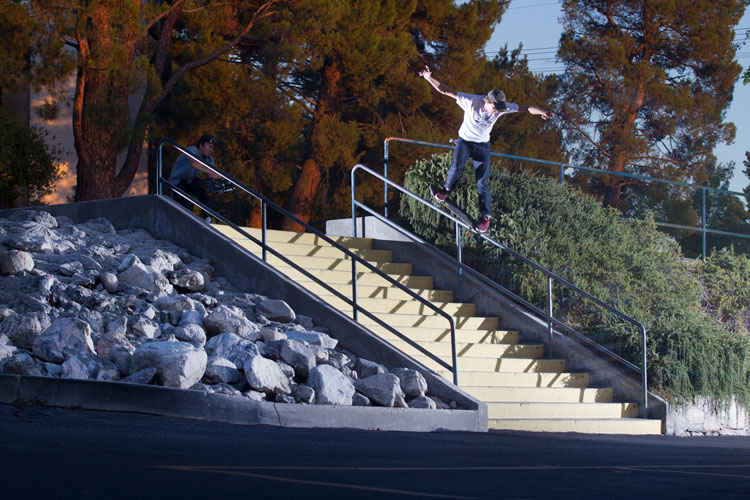 Did you pick the song you skated to?
Yeah, Dr. Dog. They are my favorite band.

Are you still doing the after-school skate lessons?
Well, the school got rid of the skateboarding program so I don’t get to do that anymore but now I am a special-education assistant at an elementary school. 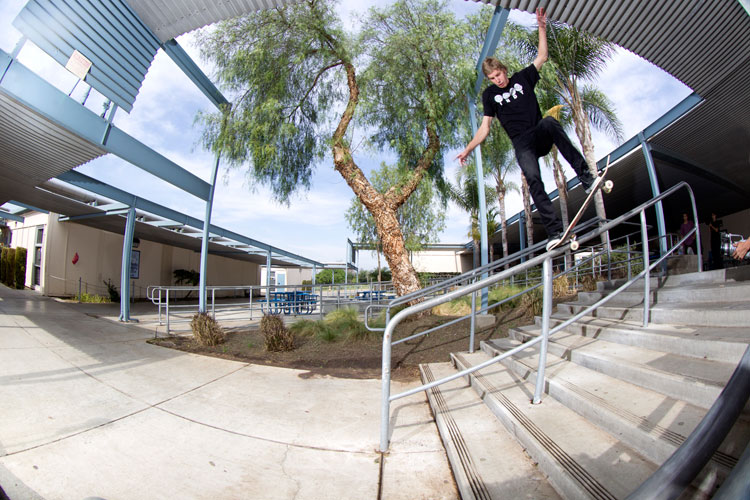 So that only leaves the weekends to film?
Yeah, I just have to try extra hard on the weekends. I try to get at least one trick a weekend.

How did you get hooked up with Tum Yeto?
I got Sinclair’s email off Jeremy Leabres and Mike started to send me boards through Agency Boardshop. I just kept sending him footage and eventually he just started flowing me boards directly. 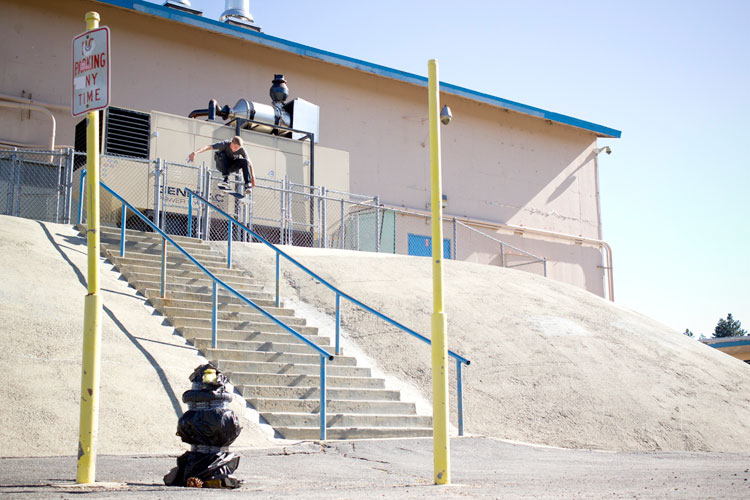 Kickflip into a mountain in the mountains   Photo: Karpinski

Why do you think there are so many Yeto riders from the Inland Empire?
I don’t know. I guess they are just bred out there. I know the I.E. backs Yeto super hard.

I talked about this with Austin Stephens at the premiere and he thinks it is because Ed lived in Corona before moving to Huntington when he was younger.
It is pretty crazy how big the list is. 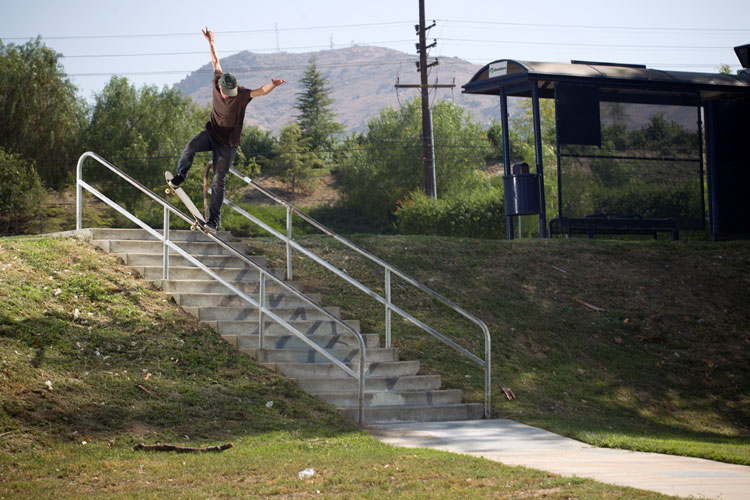 Who is you’re favorite skater to come out of the I.E.?
That one is tough. I’m going to have to go with Forrest, though.

Is he really that crazy or do you think he just gets a bad rap?
He is just really misunderstood. He is a super nice guy and one of the hardest-working skateboarders I have ever seen. 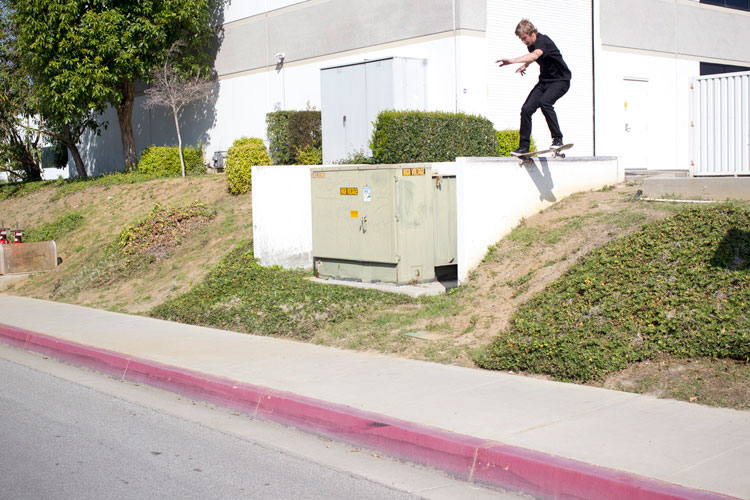 I saw Leo took you on a Brostyle trip recently.
It was the best. The funniest trip ever. Not my words.

Where did you go?
We went to Denver. We skated a ton but got to do all sorts of other stuff too. We went to the Coors factory out in Golden. They show you how all the Banquets are made and then you even get three free beers at the end. We even got to see Built to Spill while we were out there. 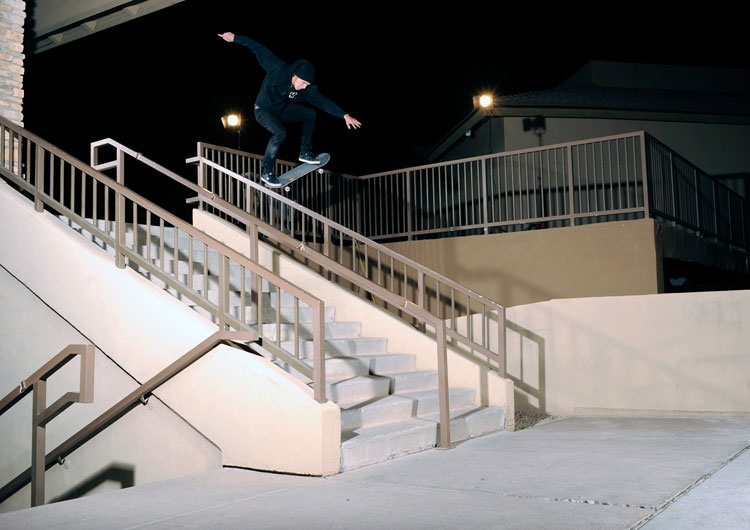 What is you’re favorite Foundation video?
That’s Life. That’s the one I grew up with. They are all great, though.

What was the first video you ever saw?
The first videos I had were Misled Youth, Yeah Right and the Lakai Euro tour. 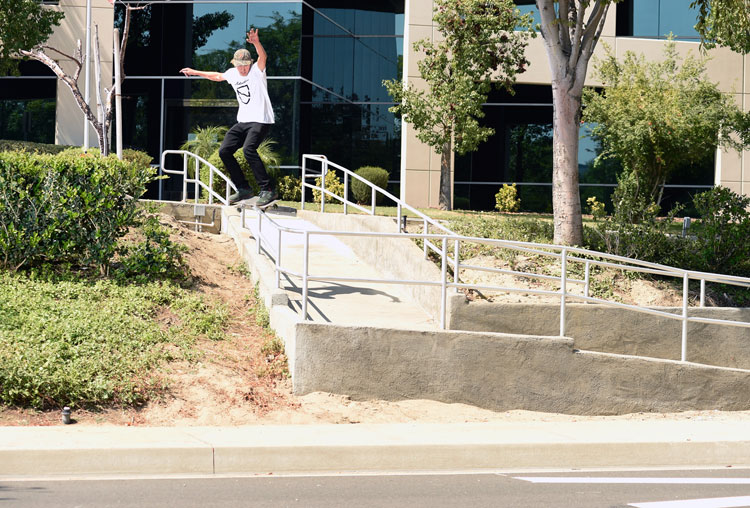 I heard you helped build that new T Street DIY Park.
Funny story: the cops showed up when we were in the middle of building. We were are all standing there with cement on our hands and they asked what we were doing. So we tell them we are trying to build a quarter pipe and they make us all sit down and we hear them whispering back and forth, like, “Well, they’re not tagging—” Then they told us we might get fined and it was all up to the water department. So a few minutes later the water guy shows up and just started giving us tips on how to make the cement better. Ha! So that’s how T Street got started.

Do you skate there often?
It’s really fun but it’s pretty hot there now that it is summer time. I have just been skating Hunt Park lately. 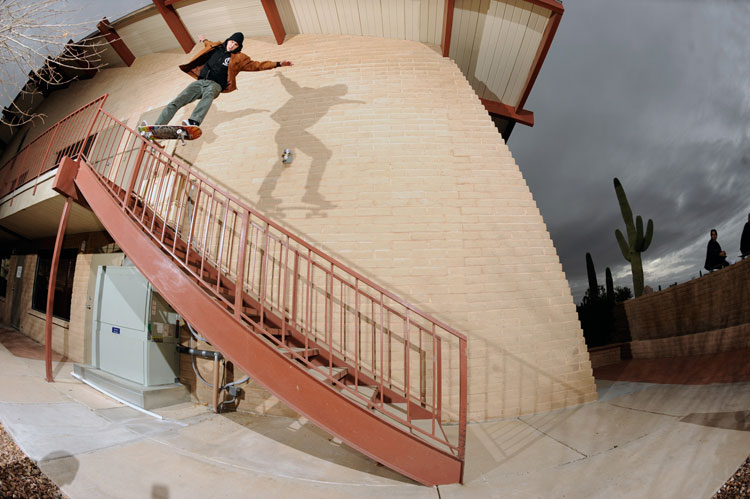 Who do you usually skate with when you are home?
Tre, Forrest, Nolan Miskell, Ruben and Raymond Reyes and my buddy Ivan.

What are your plans after the Pig video? Any new projects?
We were going to make a homie video with all of our Riverside friends. I still have some footage that didn’t get used so I was just going to put that towards another part. I think Tre is going to be in the video too.

Thank yous?
My parents, Edna, Mike Sinclair, Don and all the Yeto bros, Agency Boardshop, Forrest, Tre and all the Riverside homies.