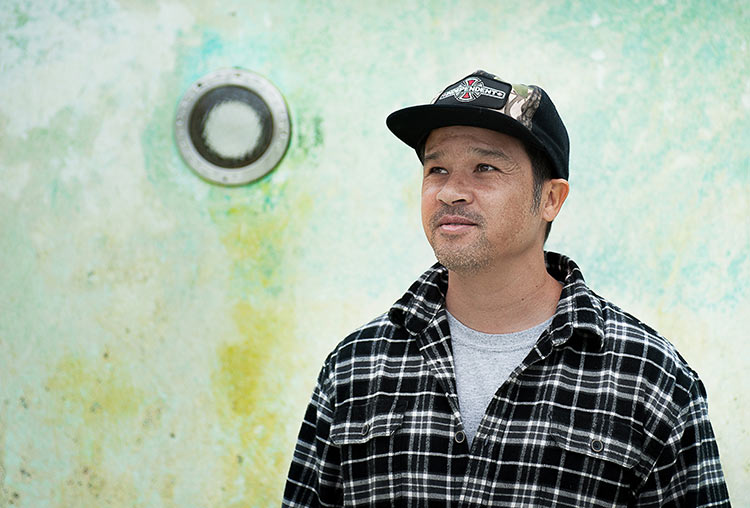 A legend of Arizona skateboarding, Chris Livingston came on strong in the late 1980s and turned pro for H-Street in 1991 when the team was at the forefront of innovative skating. His vert parts in Shackle Me Not and Next Generation were mind blowing—he did head-high airs to disaster and was an early adopter of taking street tricks to vert. Ramp skating, however, was dying and Livi kept getting hurt. After years of battling some nagging injuries Chris has remained healthy and done some next-level shit in the backyard pools of Phoenix and elsewhere. Vagrant Skateboards released a new part a couple weeks ago as well as a Chris Livingston board, and it couldn’t have happened to a nicer and more humble absolute shredder. Cheers, Livi! —Wez Lundry
  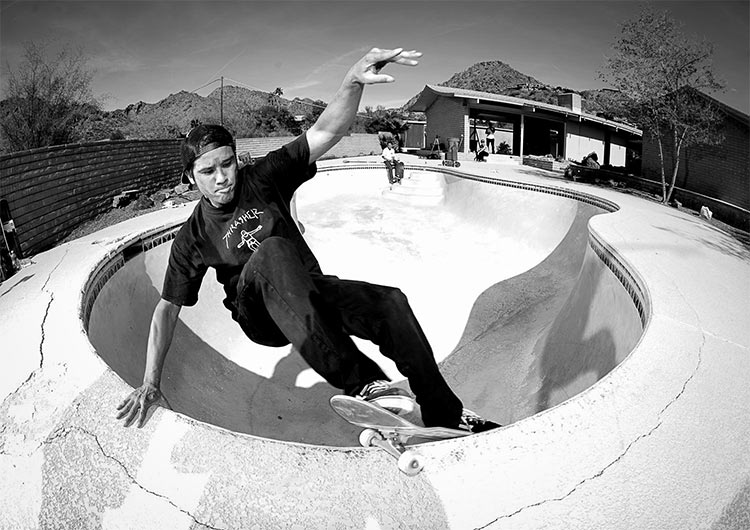 Chris Livingston, laid back on a square edge     Photo: Rhino

Those must have been heady days, but times were tough for vert. How did you hold it together?
I didn’t! Really, I turned pro in ’91 and vert skating was dying and street was developing, so it just kinda died for us. No one was making money. I hurt my knee pretty bad and came back to AZ and went to school. And I partied a lot. I got my knee fixed and started skating again in 1997 or so, back in Tempe.

You have been healthy for a few years, but there were a couple years there where you seemed to be on and off. What was going on?
I’ve been plagued with injuries and never had insurance. Injuries that other people could take care of in a week or a month plagued me for years. I didn’t have a way to get things handled. That was kind of the story there. I just had lots of injuries that have been long term since I was a make-it or take-it guy, just willing to take the slam or make the trick. My body paid the price for it, but lately I’ve been taking it a little slower and just skating for fun and letting things come instead of reaching for it.

You take good care of yourself now.
Yeah, other than the A-Team nights, but those are getting fewer and farther between now that the fire pit is gone. If I’m not skating I’m hanging with the kids and wife. We eat healthy. And I rehab the micro injuries of skating and take care of them. Riding a bike, that has helped in that regard.
  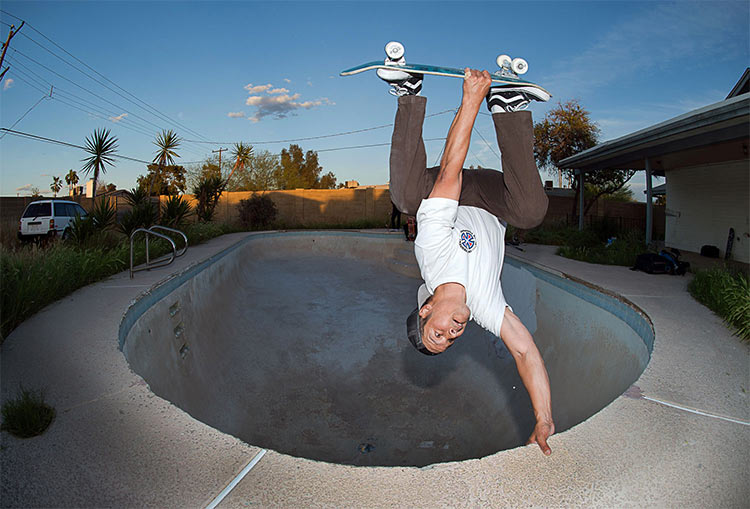 No Razors, no pad nannies. Livingston plants it like a grown man     Photo: Rhino

What is the A-Team?
You, me, Courtman and Dixon, Joe Dirt, Sizzler, Jereme; it’s the AZ pool crew. We are the guys who go out and find and skate the pools here. And Hoss. And Brad. I hate to forget people. Slawdog. And on and on—and all the other guys. Shaggy, Punker Matt, McNair, Jimmy Moore—all the guys who come here but don’t live here. We take them out and we have a good time.

Phoenix seems to have a pretty good scene for pool riding and skating despite being nowhere near the skate industry.
I think that’s why it’s good—there is no industry. Nobody is trying to do anything with it. It happens organically. Nobody is trying too hard, or we wouldn’t be here in Phoenix. As far as pool riding, I did a little research and Phoenix has the most pools per capita. We have a lot of people here, five million or something, we’re a big city so there are a lot of pools. I would say right now we have between 20 and 30 that we could just go skate. Since I’ve been back from a little shoulder injury, I’ve been out eight times or so and skated at least 15 pools, only two or three that I’ve skated before. Now that Joe is back in town and Court is on it, we’ve got tons of stuff to ride.
  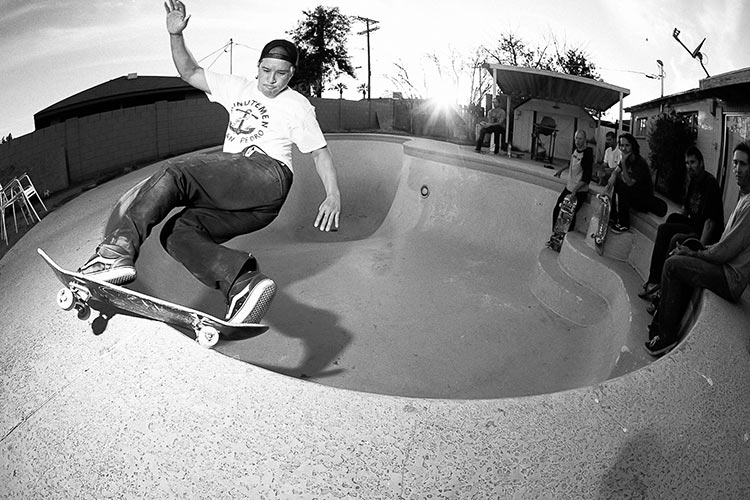 Tricks are for kids, so Livi does “maneuvers.” Frontside ‘cane in the shallow. Wow!     Photo: Westcott

It seems like pool riding had a renaissance a few years ago and everyone wanted to get a pool photo in the mag, but things have died down a little. There are plenty of pools out there in some spots, but it seems like people just don’t want to put in the effort.
Yeah, I think people want to get tricks, but the people who really want to ride pools want to ride them because every one is unique. Every lip is different. We’re interested in finding lines and the newness of it all, not necessarily to get tricks—it’s lines, not tricks. Every once in a while you get a pool that you just have to do tricks in, but it’s more looking for lines. It goes back to the beginning of skating—surfing on natural terrain that wasn’t meant to be skated. The guys who come through Phoenix who we skate with, that might be a good 80 percent of the hardcore pool skaters of the world, since we have so many pools.
  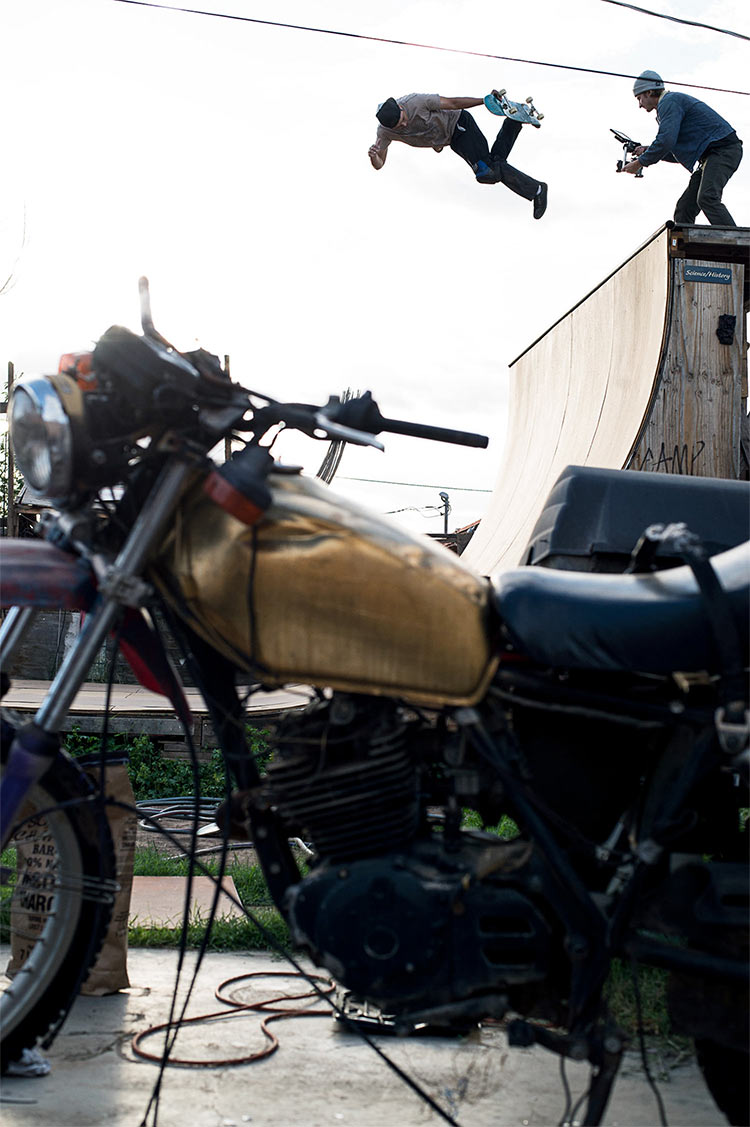 What else have you been riding?
Honestly, for the past eight years or so just pools 99 percent of the time. That’s what’s fun. That’s what our friends do, and it’s just us. You don’t have to go to a park and deal with Razor scooters and little kids. I’ve been craving to skate some vert and Mike Lovell just built that bowl for Mia so I want to skate that. I skated in Colorado, the Team Pain stuff, and Washington and Oregon, the Grindline stuff. Rest in Peace, Hubbard. And P-Stone!

Shouts out or goodbyes?
My wife Tiffany, my kids, Ava and Ella, Independent trucks and Rhino, the A-Team, Rob Washburn and Michael Furukawa at Bones bearings and wheels, Jason Carney at Slappy’s Garage, Coburn for editing and filming and Steve Van Doren who sends me shoes. And Mike at Vagrant and all the homies!
© 1981–2022 High Speed Productions, Inc.