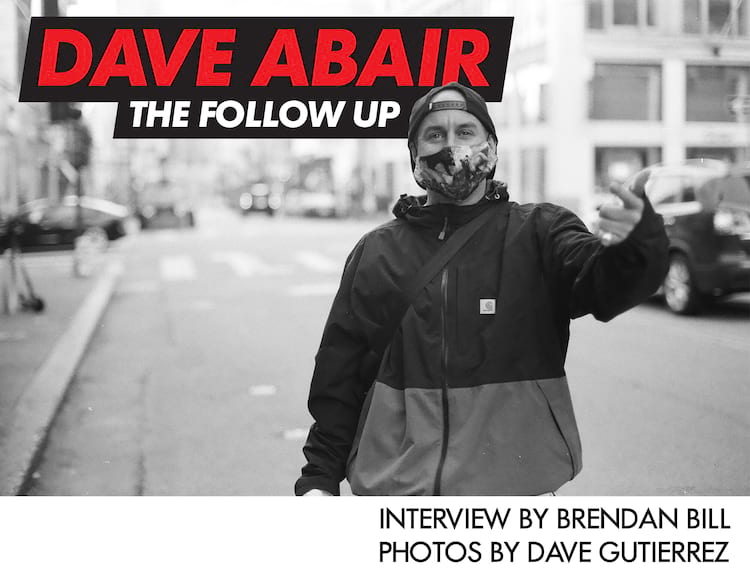 Since moving out to SF, Dave’s established himself as an underground hero of the hills. We talk to the man himself to learn how The City vibes with his East-Coast sensibilities, sobriety and his undeterred work ethic.

What’s up, Dave? You were just in Vermont for three months. How is it being back in SF?
It’s nice because there’s no snow on the ground, it isn’t 12 degrees out and it doesn’t get dark at 4:30 every day. But I did get to skate there the first couple of months that I went back. I got to skate with some friends that I grew up with, so that was super fun.

Who are your sponsors?
I skate for Scumco & Sons skateboards, Independent trucks, Satori wheels, Old Friends clothing and accessories and Toebock.

What’s it like riding for Scumco?
Being from the East Coast originally, I’ve always wanted to stick to my roots. I got an opportunity to ride for Scumco years ago. Brian Downey, one of my old teammates from Yellow Brand and Satori wheels, hit me up about it. Once I talked to the owner Nick, I thought he was super rad and then I looked into the company more and liked what they were doing. It just felt right at the time. Since then it’s just grown and I’m proud to be a part of it. 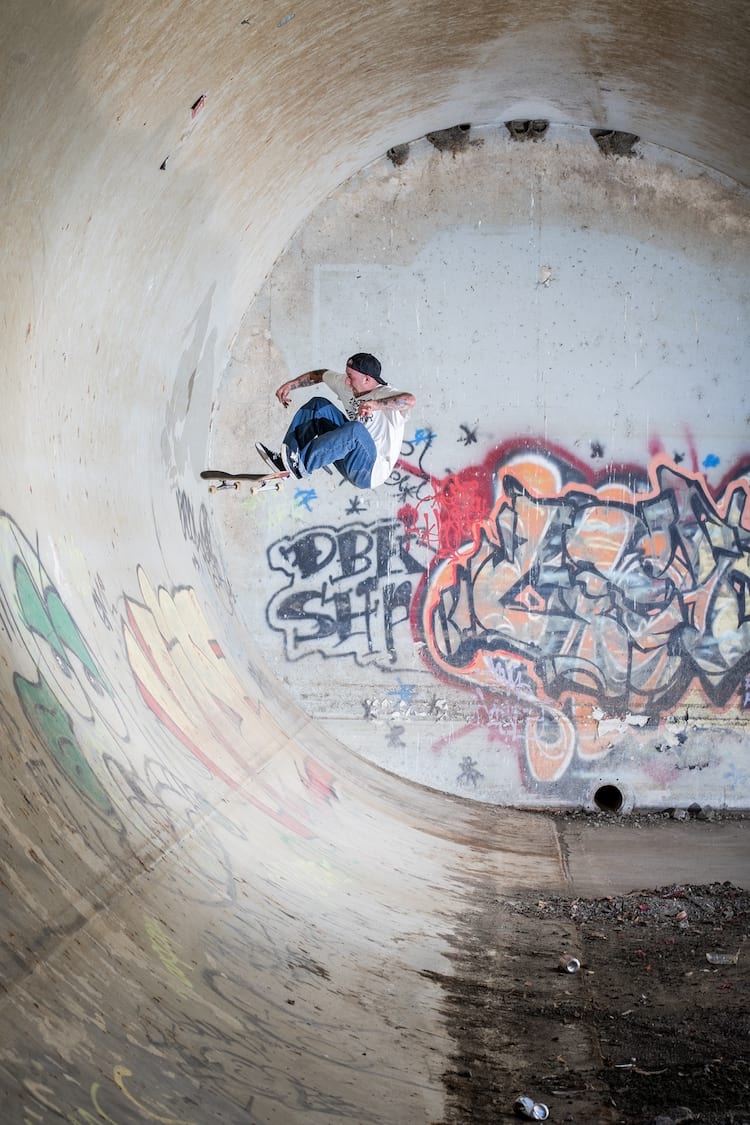 Nollie frontside flip on The Hook

You’ve been living here in SF for a while now. What sparked you to move out here?
I moved out here about 13 years ago. The inspiration was probably Penal Code, the FTC video. I grew up watching that. I think San Francisco and Northern California are the closest things to the East Coast. I had tried San Diego and LA and just wasn’t feeling it as much. When I got to SF it just fit like a glove. I love skating hills, so being here was like a giant cement playground.

You’ve bombed a ton of hills here over the years and always put them in your video parts. That wasn’t always so popular back then. What do you think about how popular hill bombing is now? Milton is doing one for his latest Indy ad.
The hill bombing sort of comes and goes in waves. At one point everyone is jumping on it and wanting to do it and then the next moment it's kind of fading away. You have a lot of kids moving out here specifically to charge down hills. If you like doing that, you will always continue to do it. I know people here in The City who will always be bombing hills whether it’s a cool thing to do or not because they just love the rush. It can be a trendy thing to do at times. One person does a hill and instantly everyone wants to go hit that same hill. I think if you really enjoy doing it, though, you will always do it no matter what’s cool in skateboarding.

Kickflip into a stacked hill, gettin' risky will always be in style

You’ve always been good about picking spots that end in a hill bomb or finding ways to incorporate them into your parts.
One of my favorite skaters is Dennis Busenitz. Seeing him do lines in the middle of hills is what made me want to do that. Hill skating in general, especially if you’re doing lines, just looks better to me—wallride over here, powerslide in the street, hit a ledge on the other side of the street or vice versa, that's just the best feeling. And obviously if you get the last trick in the line then you get the satisfying ride away down the hill. Riding away from a trick on a hill is more satisfying than anywhere else or any other spot.

You’ve filmed a lot of parts here in SF. How does that factor in to what you choose to film? Does it make it difficult to come up with ideas? How do you keep it interesting?
I think I’ve filmed at least five parts here. I guess I’m just always looking for different routes. I like to put on my headphones and just walk up and down neighborhoods, or take the bus out to somewhere that I haven’t explored. That’s how I keep it interesting. The spots are out there; you just have to hunt for them.

How has your connection to The City changed from when you first moved here?
I feel like The City has changed drastically in the last four years or so—the skate scene as well. It’s just different. I’ll always love it. As it changes. though, so do my feelings about it. It’s a home base for me, though. Vermont and SF are still my favorite places in the world. It’s crazy how much money it takes to live here, though. If you don’t have a job or a side hustle, I don’t see it working. I work at a dog hotel called the Hound Lounge and I always work overnight shifts. That’s how I’ve managed to make money and still skateboard every day.

How did this part come about?
I had just finished filming the part for the Old Friends video Novia. I was talking with you at the premiere and I was still so fired up from filming for that. I think we just started talking about the idea of doing another VX part. I just wanted to jump right into another project. We had filmed that last hill bomb in Novia where I hit my head, and I just wanted to keep charging like that. 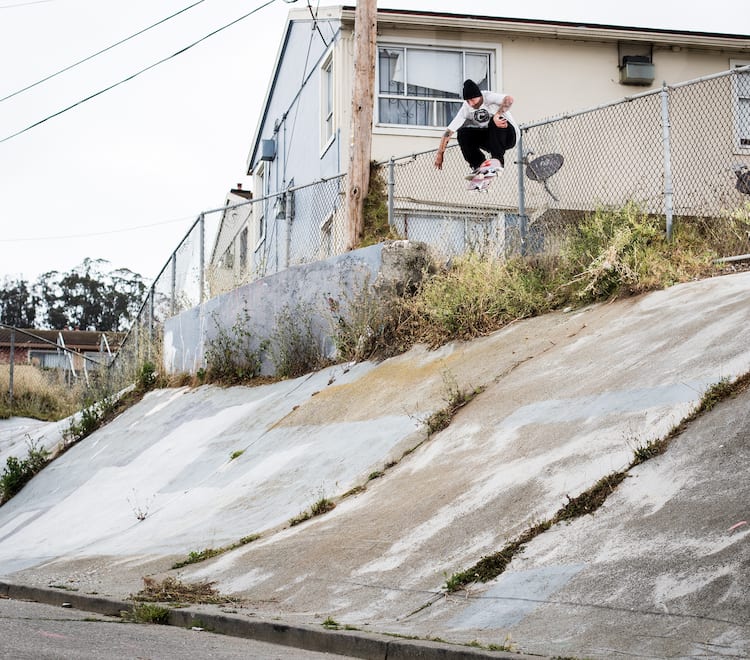 The hunt bears fruit in a crusty corner of SF. Frontside shove

Almost every clip for this project was just you and me with maybe one other homie in the car looking for spots. What’s the advantage of that versus skating with a crew?
The advantage of that is just that there’s so much focus on what we’re trying to do. There are less distractions. If we’re combing neighborhoods and I see something, it’s easy to just stop and check out a spot. You have the camera right there. If we manage to get something without getting kicked out, then we just jump back in the car and move on. It’s on the timeline. It works for me. It’s much harder when you’re rolling around with a larger group. That can be fun, but it’s just generally harder to get things done.

Walker Ryan has some guest clips in this part. What’s your connection to him?
Walker is one of my dearest and best friends. I met him years ago back in San Diego and immediately clicked with him. After knowing him for just a few days he offered for me to stay in his dorm at UCSD. We’re just similar and he just has such a good head on his shoulders. He's also one of the most amazing skateboarders I’ve ever seen. He’s just been a solid, constant friend in my life and always been there for me through thick and thin. He’s always included me in his videos, too. Check The Shuffl Video and Novia. 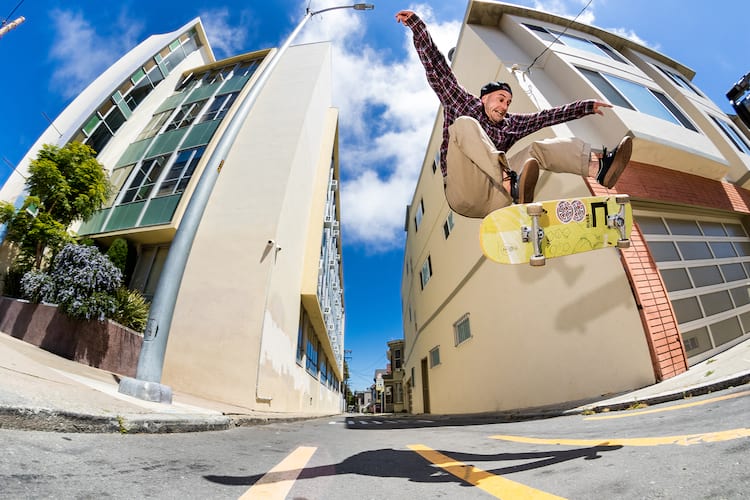 Soaring from concrete to concrete, Dave hucks a hefty heelflip

This part is called This One’s For You. What is the meaning behind that name?
The name is for my best friend Sean Stem who is no longer with us. A way that I like to have him with me is by wearing a shirt or sweatshirt with his name on it. It makes me feel like he’s still on the session. He would have been proud. We always talked about what it would be like to film a part for Thrasher growing up. Getting the opportunity made me think about him a lot. The part is for him.

You were sober for the entire filming of this project. What sparked that?
I’ve had a hard time with alcohol. What started the sober streak was the opportunity to film the part for Novia with Walker. Most of that part is sober, too. I just started having so much more energy when I stopped drinking. I woke up every day and I just felt super motivated and clearheaded. I feel that I skate better when I’m sober. You can go skating consecutive days in a row—no hangover, no jittery legs, no cloudy judgement—just ready to go every day. Even after being super sore you can still push yourself to roll around. I just felt more like myself on the board than ever.
What’s the most memorable trick from this part?
Well, it’s not a trick; it’s a line. Actually, it’s an entire day—one of my favorite days of skating ever. Thanks for sticking with me through that. We started with the manual heelflip, ollie over the median line up in Diamond Heights. After that we went over by the Cow Palace and got that narrow run with the front shove into the big bank. That spot is scary and takes a lot of energy to skate. I remember after that I was pretty tired and wanted to call it, but we decided to go down to EMB and skate around. We ended up trying another line. The day was already half over and I was stressing about getting to work by 4 PM. I was just struggling with the line. I stuck and slammed on the nollie frontside flip down the six at least ten times. My legs were so shot by the time I got to it that I had no energy to stand up. Somehow I managed to roll away and I just collapsed after that—no time to celebrate. We got in the car and you took me to work. No shower, I just went straight into a 12-hour shift. it's still one of my favorite days of skating ever and those are a few of my favorite clips in the part. 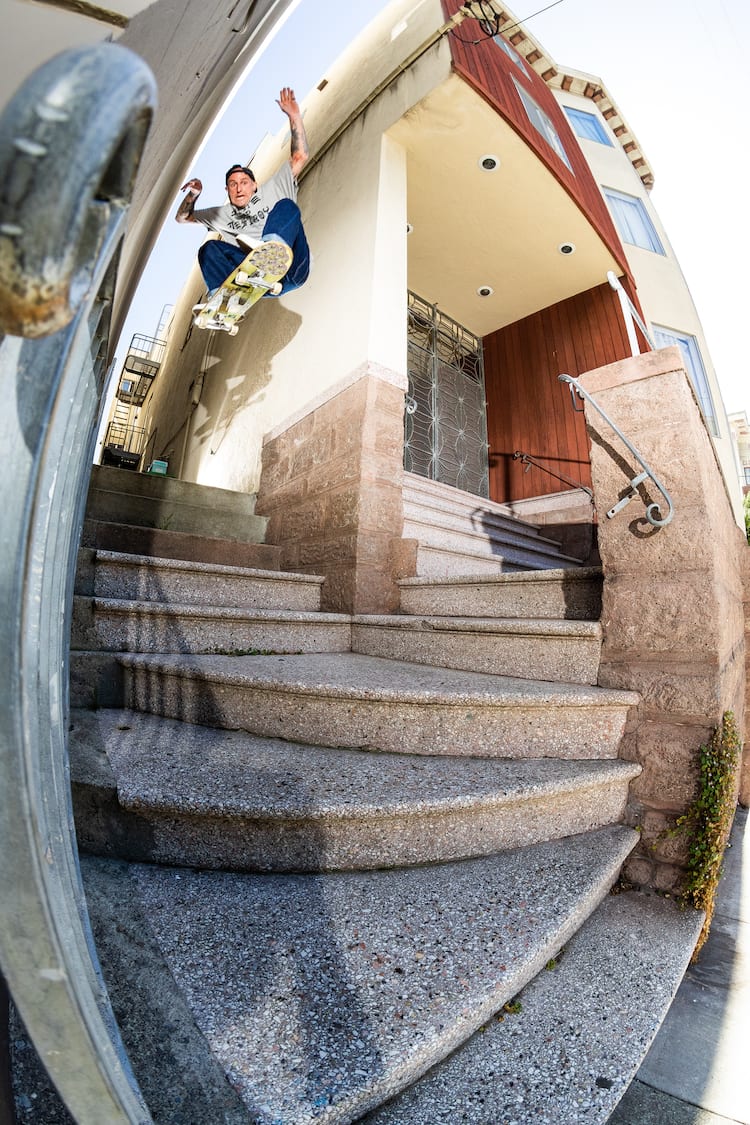 Keeping cool with a clear head, Dave cracks a claustrophobic ollie out to the sidewalk

In my opinion this is one of your best parts, considering the spots, tricks and music. What do you want to do next?
I would like to maybe film one more short and sweet part in SF. After that, it’s time to figure out the next step—maybe get a big-boy job. I’ve worked with dogs for the last eight years and I have a huge interest and passion for that. I’ve thought about going into that industry, maybe starting my own dog-walking company. Something where I could still skateboard, too. I’ve also looked into commercial fishing and crabbing seasonally with my friend in Alaska. No matter what I’m doing, though, I’ll always be skateboarding for as long as I can. 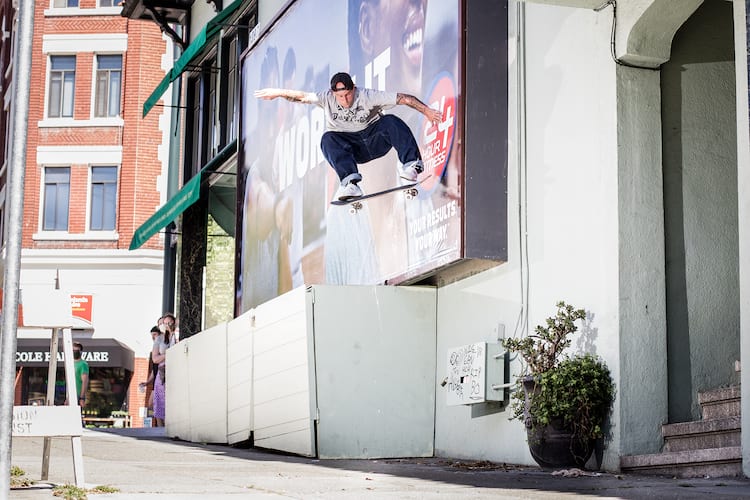 Abair gets results with a wallie, no membership required
© 1981–2022 High Speed Productions, Inc.