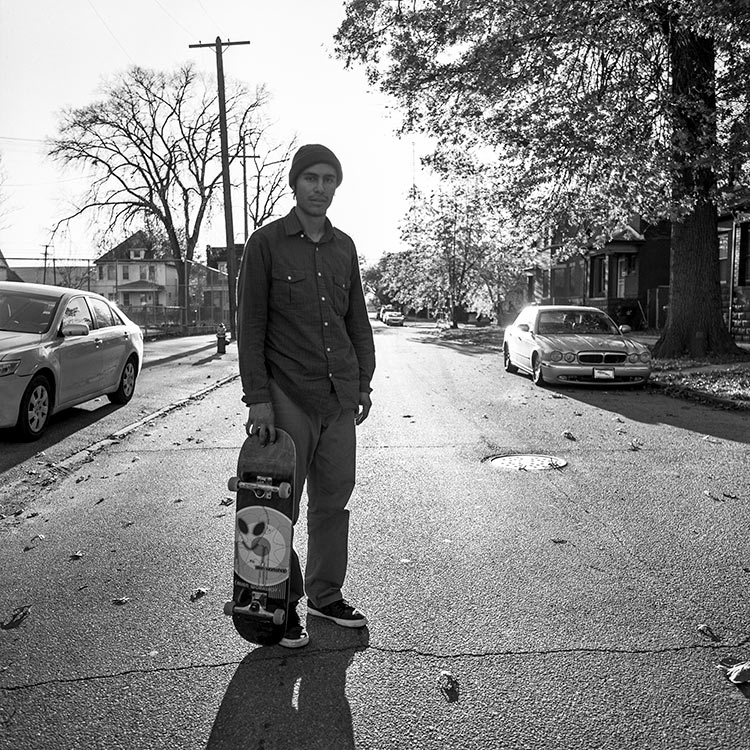 I love it when Joey comes to visit. He is a skate rat in its purest, most humble form. He gets me out skating all day and watching old skate videos all night. With the most critical eyes of the skate world on Alien Workshop since its rebirth, I can't think of a better dude to represent the company. He brings style, grace, and spot selection along with a bag of classic tricks to a company that built itself on such qualities and aesthetics. I recently got to catch up with Joey about turning pro for Alien, filming for Pyramid of the Sun, Detroit and what's next for him. –Justin Bohl

What’s up, Joey?! Congratulations on getting the boost from Alien! I feel like it’s been a long time coming. How is life as a pro skater treating you?
Thanks! It’s been good. Not much has changed, although I did treat myself with a new moped to cruise around on. It’s been keeping me occupied in the mornings.

How did you celebrate your new status?
The homies over at Atlas skateshop threw me a party for my board and video release. It was a fun night! 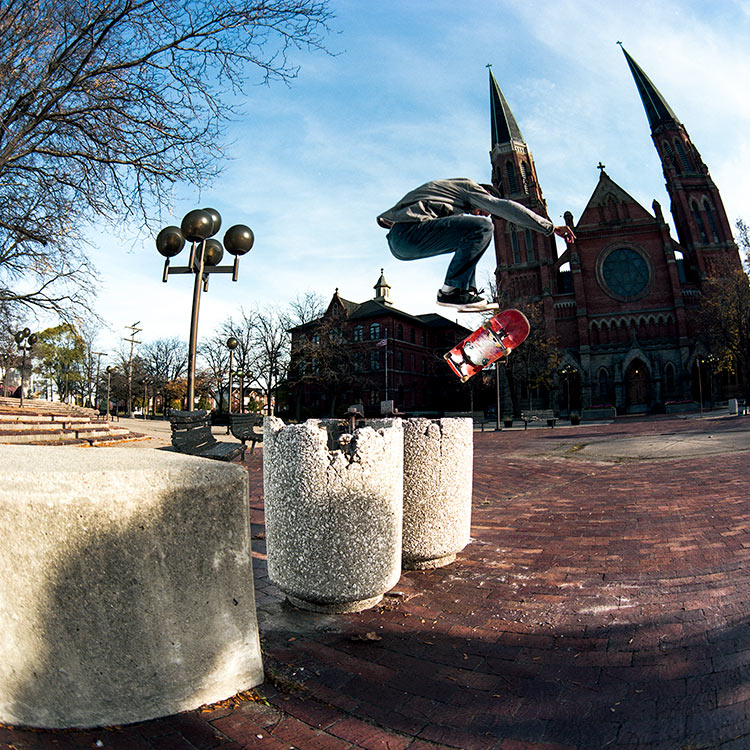 In crust we trust. 360 flip over some rubbish receptacles    Photo: Ching 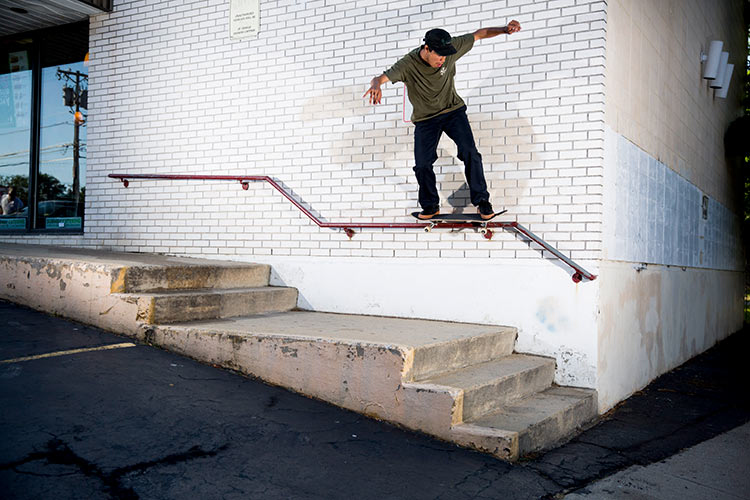 Did your mom put your board up in the house yet?
Ha! Not yet. They are sitting in her room next to the bed. The family's stoked, though.

Tell me about your first graphics. Who made them and did you have any role or say in their creation?
I pretty much told Mike Hill that I like owls and he hit me back with a couple mockups. I ended up choosing one and it was pretty much the way I imagined it. Then we came up with some nice toned colors. And for the second graphic, my girlfriend drew it and Hill touched it up. I am really hyped on that one. It was inspired from a recent trip to Mexico City where we traveled out to a vast Mexican archaeological complex, which is known as Teotihuacan: Pyramid of the Moon and Pyramid of the Sun.

You just came out with your first pro part, Pyramid of the Sun, on Thrasher. Other recent Alien Workshop projects have been filmed in HD. What motivated you guys to bring out the VX for this part?
I’m actually not really sure. I think it was just around the time when Miguel Valle found a minty VX on Craigslist and he wanted to use it. So we just started filming around town then did a couple trips outside of SJ. 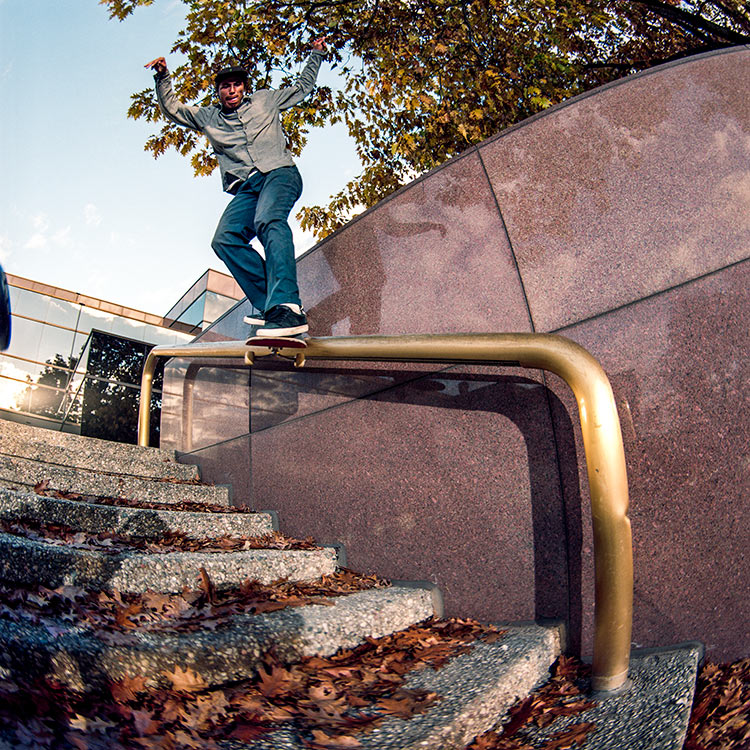 Cheek squeaking back Smith for the gold     Photo: Ching 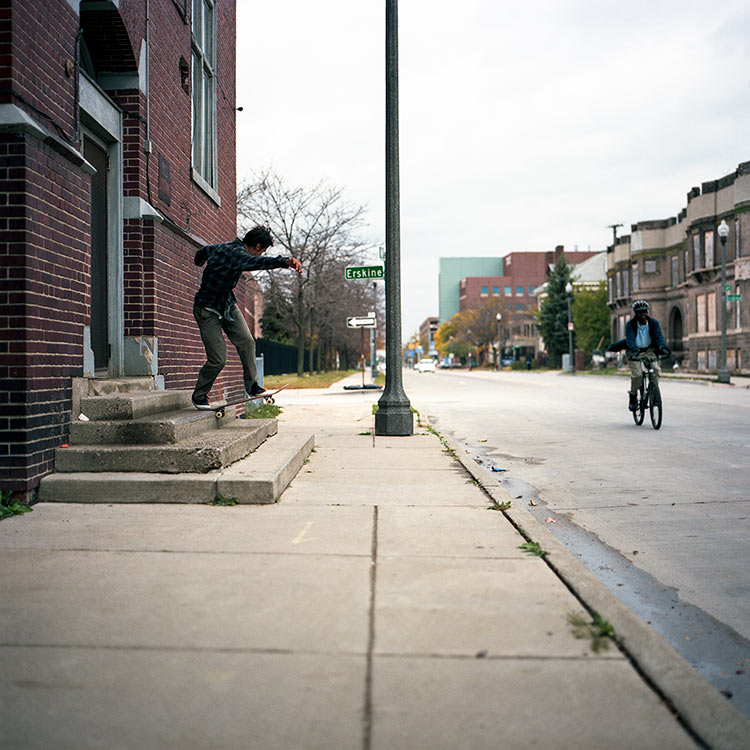 Those stairs look like a Pyramid of the Fun. Back tail shove it     Photo: Ching

Is there a certain clip you are most stoked on?
Probably the clips from our cross-country trip. I love how all the spots look out East.

The first minute of your part was all filmed in Detroit. Did you live there for a bit or just have a really productive trip?
Just had a really productive trip. Nah, just playin'. We’ve done a lot of trips out there and there's never enough time to hit all the spots. You hooked us up with a really good spot book, so we got to pick out exactly what we wanted to skate. A lot of the spots were pretty much a go anytime of the day so we got to do a lot in one day. It was pretty much Yaje and I skating so it was easy to agree on spots.

Skaters here in Detroit were stoked! It was really dope to see a non local release a major video part containing that much footage from here as well as spots that had never even been skated. That’s never happened before. What led to your decision to group all of the Detroit footage together like that rather than spread it throughout the part?
That was all Miguel. I think it just seemed right to put all the footage in order from the different trips and cities we skated. 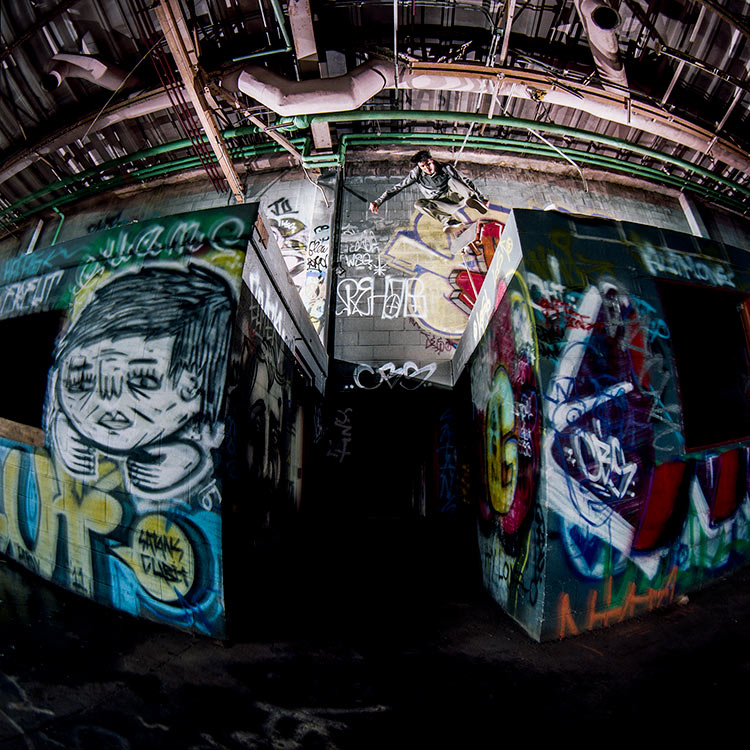 A beauty of a backside flip in the graffiti grotto     Photo: Ching 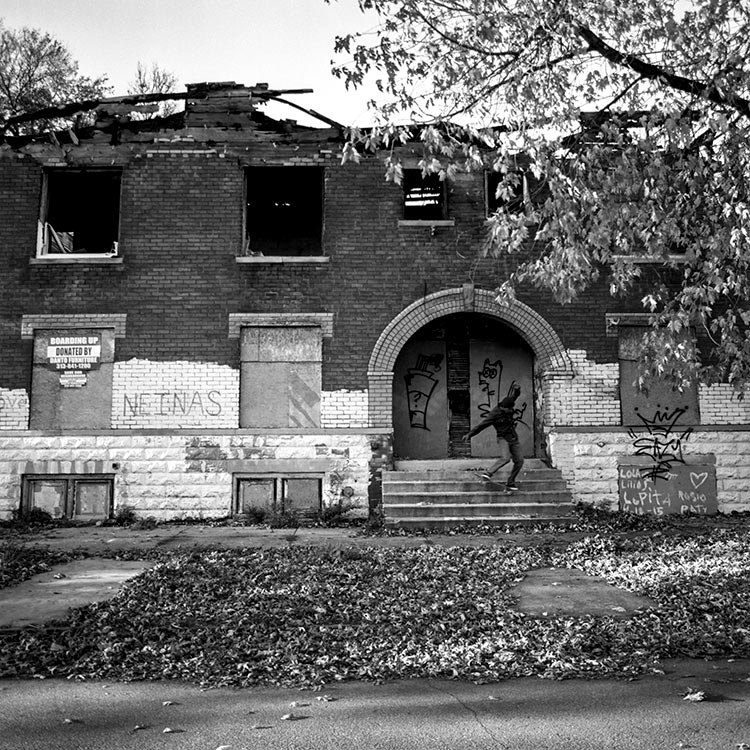 Would you ever skate to a song by Detroit artist Sixto Rodriguez?
I would love to. I feel like most of the upbeat ones have already been skated to already, though. But he’s the man!

You had several clips from Mexico in your part too. What took you down there?
My buddy Coung took us out there. We would just cruise out to San Diego to skate and do little day trips to Tijuana and Ensenada. They are really close to SD.

Tell me about these secret hot springs and prime nature spots you go to on your cross-country skate trips. Do you guys just wander around the desert and woods until you find something cool or do you know about them beforehand?
I think we’ve just done these cross-country trips so many times that we are familiar with what all the different states have to offer. Yellowstone area is by far the funnest route to take home.

What's the most memorable event from your travels since riding for Alien?
I can’t think of just one, but I would say the one and only Workshop trip we’ve done where we skated Detroit, Pittsburgh, New Jersey and Toronto. Every city we went was amazing, but it just felt good to be with the dudes. 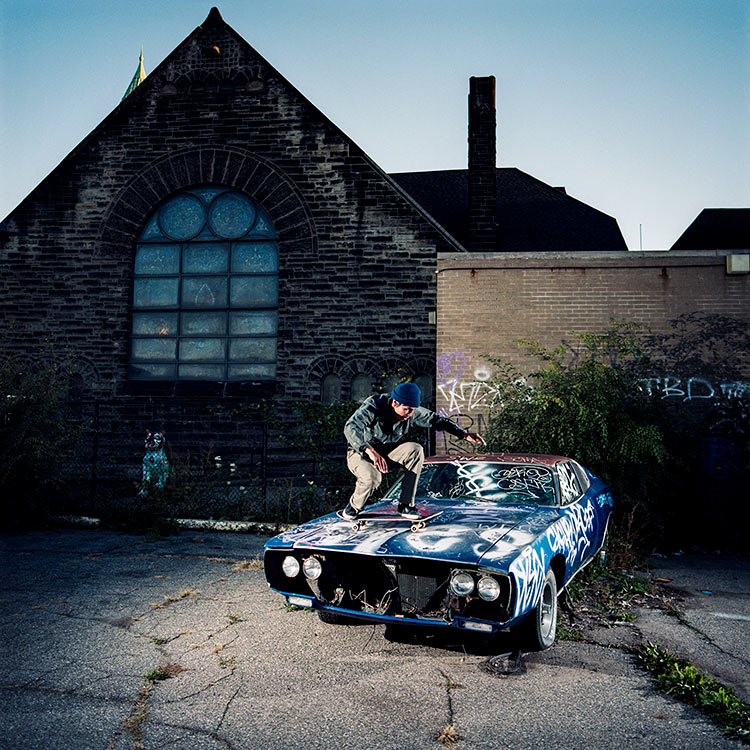 Rolling through the hood? Nah, rolling on the hood. Ollie to car cruise     Photo: Ching 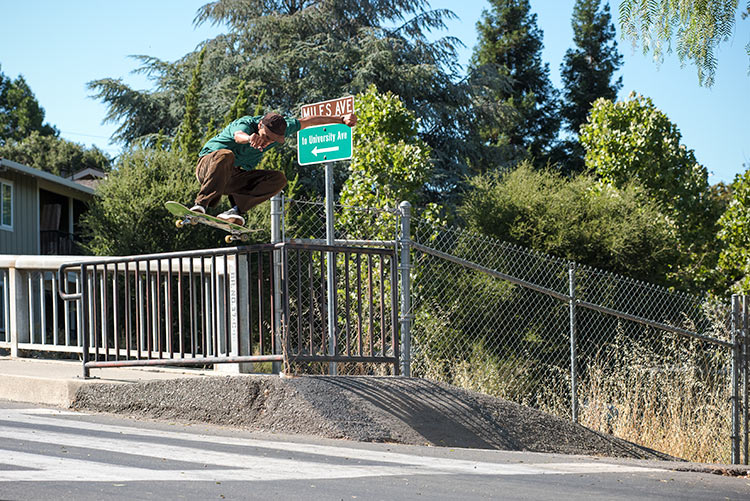 Looking for University Ave. or huge switch ollies? That green sign can hook you up    Photo: Robles

You and filmer Miguel Valle are quite the productive duo. I’ve always thought some of the best video parts result from a skater/filmer combo, people that grew up in the same hometown skating together that are on the same wavelength as far as likes and dislikes in skating. Did Miguel play a big role in helping make this new part happen? Will he be filming and editing more stuff for Alien in the future?
Yeah, for sure. I think we are both inspired by the same old videos and when it comes to a spot, we can agree on if it looks good or what would be a good trick for it. Yeah, Miguel pretty much filmed the whole part. I think he’s working on a couple new projects with Alien. I can’t wait to see them.

How many times have you seen Miguel do a switch 360 flip while holding his VX?
Ha! too many. He’s got that one on lock. I’m quite jealous.

Are you San Jose for life? Could you ever move away from Red Park and Cinebar?
I can see myself moving out East because I really like the way everything looks and it’s all new to me. It gets so repetitive going to the same spots in San Jose. Although I am blessed to have so many homies here. It would be tough to leave that. 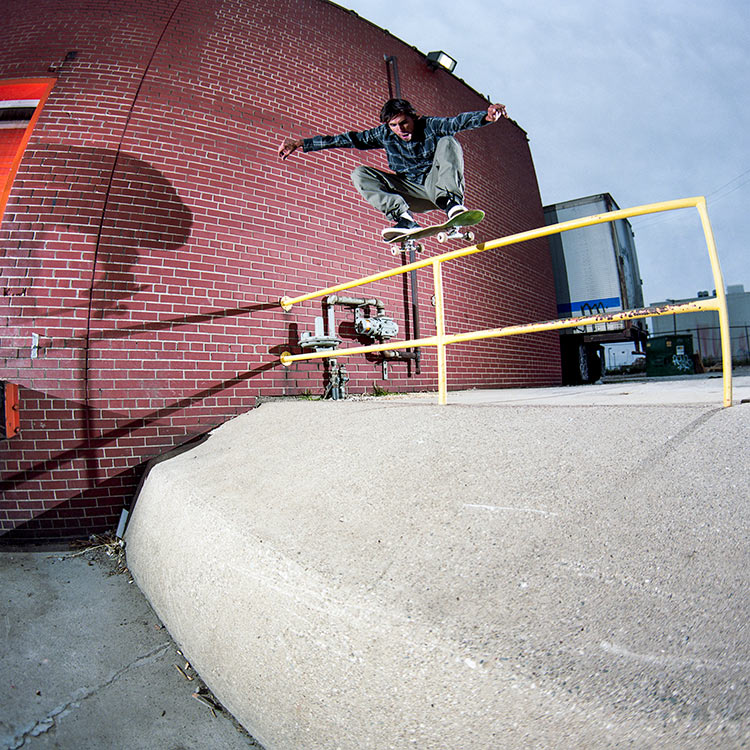 Frontside 180 nollie into the bank and out of the am ranks. Congrats, Joey!     Photo: Ching

Any recent transmissions or happenings from the Alien bunker in Ohio we should know about?
Nothing too much. I think Mike is starting to work on some new graphics for the next season down the road. It’s pretty rad how everything is coming out of the bunker now. Seems to be going good.

So what’s up next? You still going to be out regularly filming and driving cross country on skate trips? Does the Honda Element have a few more trips left in her?
Yeah, just been skating around downtown San Jose a lot. We have quite a bit of footage, so Miguel and I are working on another part that should come out around May. I ended up selling the Element! So this year we are working out a Barcelona trip to change things up.

Any last words before we end this?
Thanks, Justin! Hope to see you soon.