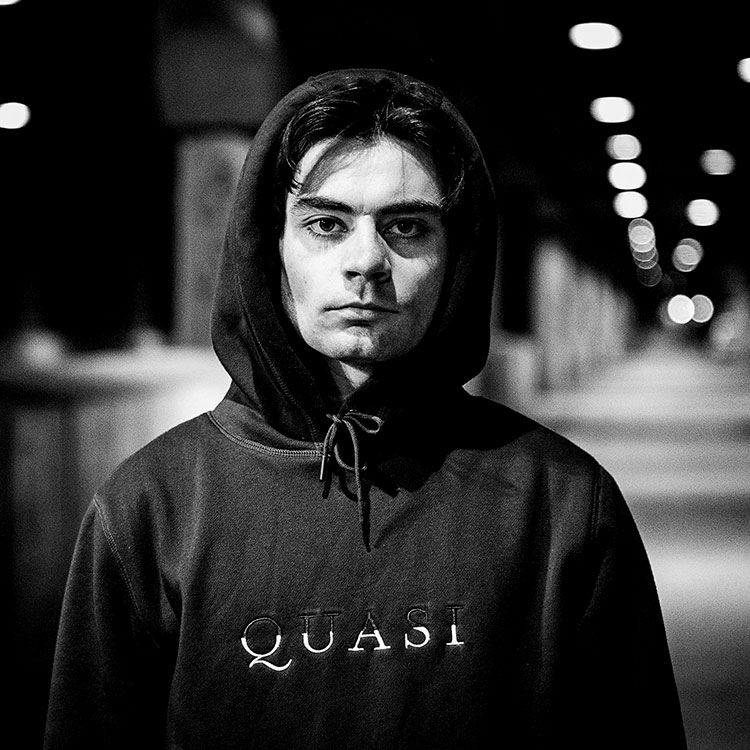 Hey, Nick, what are you up to?
Not much. Just got back from skating. I’m feeding the dog.

What are you feeding him?
Bananas. 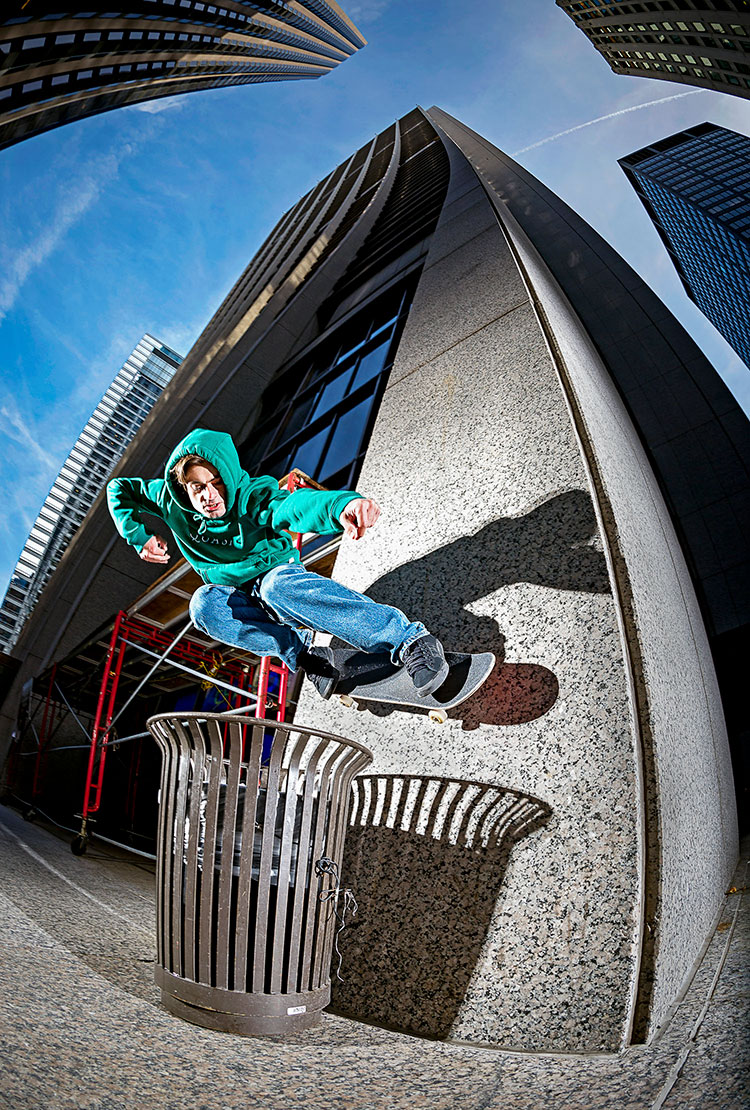 How was skating today?
Pretty good. The Quasi guys are in town. We went to Gary, Indiana.

Gary, Indiana? That place is gnarly!
Yeah, they wanted to check it out. There’s some spots there.

When there are teams in town that you’re showing around, especially one that you’re getting flowed from, do you feel extra pressure to be a good guide and show them a good time?
I think most understand it can be hectic showing people around, especially here in Chicago. There’s really only so many weekday spots and even less when rolling with a pretty big crew, but everyone’s cool and mellow. They know how it goes. I feel like 90 percent of the good, cool-looking spots are in the downtown loop area, so once it’s the weekend it’ll be a different story; even then it can be a bust but will be better just because a lot less people will be walking around as downtown can be pretty dead during the weekend. But yes, I feel a little pressure to make sure they have a good time at least.

Weather is finally getting better out there, yeah?
Yeah, but this winter seemed like it went on forever and it’s still cooler for this time of year. Here in the Chicago area this past winter we had what’s considered a polar vortex where it was like negative-25 degrees and a negative-50 wind chill. There were warnings to stay inside or your eyes could freeze! If you threw a boiling pot of water into the air it would just freeze instantly.

Did you go outside at all during that time?
Maybe just for a second to go to the store, but it wasn’t that bad; I was bundled up. I did see on the news a video of a guy delivering pizzas in shorts on one of those days. I don’t know how that was even possible.
  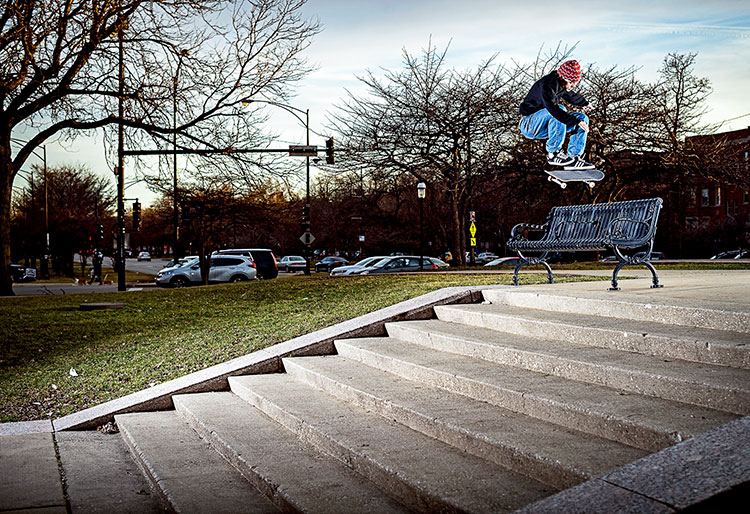 I have a hard time remembering and recognizing all the up-and-comers in skateboarding these days. Do you think kids these days have any idea who you are?
Ha! I don’t know. I don’t think so.

Where are you originally from?
Born and raised in Naperville, Illinois. Besides a couple stints in California I’ve been here most of my life.

There are some other known skateboarders from that town, yeah?
Yeah, Josh Harmony and Kevin Braun. Kevin went to the same middle school as me so we used to skate sometimes back in the day.

Were you trying to live in California at one time?
Well, I would visit periodically in high school during breaks and stuff and then after high school I moved to LA for a couple years. I didn’t have a ton of friends out there and I missed my friends and family back here. In addition to that I was more hyped on skating back here in the Midwest so it’s, like, what was the point of living there, you know? 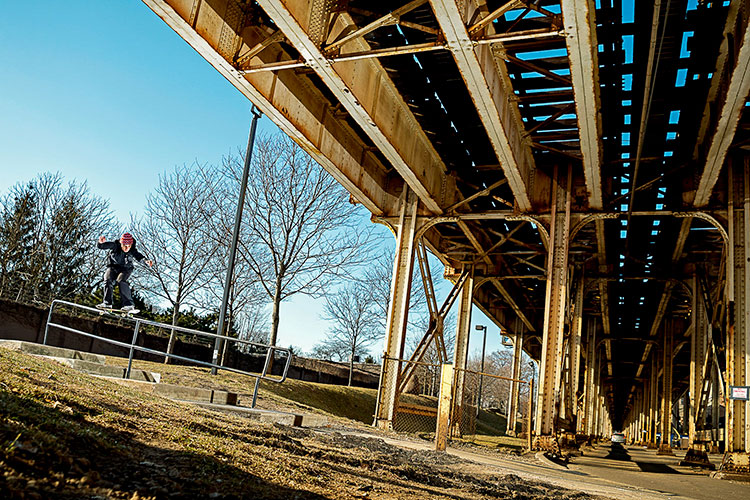 Skating and spots can be kinda of bland in the LA area sometimes?
Yeah, but don’t get me wrong—I still like to visit and there’s definitely interesting untapped stuff to skate there. It’s just a lot harder to seek out, whereas here there’s still so much fun and obscure stuff to be easily discovered.

During the end of your time in SoCal you were living in Long Beach. So many skateboarders live in Long Beach and they seem to love it, but you didn’t seem that hyped. What was your issue?
I’m not hating on LB, but before that I was living in Koreatown, closer to Downtown LA, so Long Beach just seemed a little too mellow, for better or worse. Plus, instead of being conveniently right in the city, I was driving into gnarly traffic almost every day to go skate in DTLA. Also, like I said, I just didn’t have a lot of friends there in general and even less in Long Beach.

You seem like one of those kids that started skating when you were, like, two. When and how did you get into skating?
I did start pretty early, probably about eight. My older brother Blake started skating first and I just kind of followed in his footsteps. I had a Looney Tunes board and then eventually my parents took me to pick out a legit setup for my birthday or Christmas or something. I remember it pretty well—I got it at RQ Boardshop, the local shop in Naperville at the time, and this white Rasta guy named Ray that worked there helped me pick it out. It was an Alien board with Spitfires and Indys. 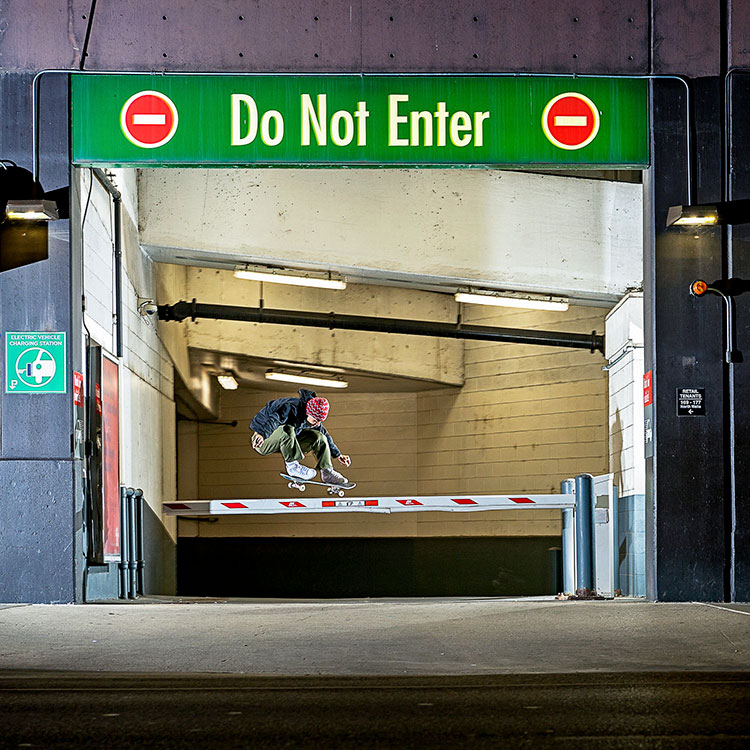 Where’d you mainly learn to skate?
Lots of skating in the driveway, like, every day. Our parents bought us some of those Ten-Eighty ramps that we would skate, then they opened up a pretty big park in downtown Naperville that we would skate all the time. Once I got a bit older we would roll around and skate street, too.

Were you a quick learner?
Not really. I feel like it took me awhile to learn how to kickflip. I distinctly remember the first one I ever landed was right before baseball practice. I had a baseball uniform and cleats on.

Oh yeah? Were you into other sports or activities as a kid before or during skating?
I played baseball and hockey sometime up into middle school. My brother was skating but was also playing hockey all through high school as well.

So by high school you were a full-on skate rat?
Yeah, more so by mid-middle school even. Aound that time my brother and I had access to my parents Handycam so we were filming around town and stuff. Also, not too long after that Krush skatepark opened in Tinley Park, another Chicago suburb. Krush was probably the first thing that felt like a sponsor. They let me skate for free and hooked me up with some stuff.

Yeah, that’s the first place I ever saw you when you were a little kid. What else did you get hooked up with after that and how did you go about it?
I was a pretty proactive little kid; I had no shame. I would just send footage to companies through Facebook and Myspace. That’s how I ended up getting shoes from Adio and boards from Shorty’s, kind of during the tail-end of those companies. 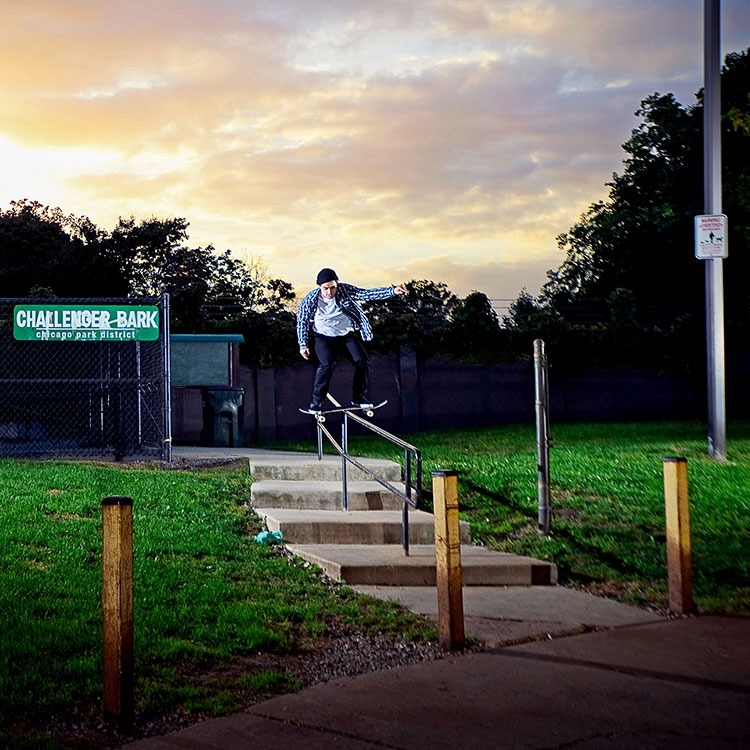 Nick got off Myspace long enough to boardslide this rail

So you were using social media to your advantage early on?
Ha! Yeah, I guess so.

What skateboarders at that time inspired you?
Locally it would’ve been the RQ Boardshop and Uprise videos—locals like Steve Perdue, Marisa Dal Santo, Timothy Johnson, Dave Ruta and just anybody with good style that got me psyched. As for stuff on a larger, broader level I liked Alien Workshop and all the Crailtap companies—big fan of Mike Carroll. Still am.

You eventually got flowed by Crailtap companies for a bit, right?
Yeah, my friend gave my footage to the Crail filmer Federico and he gave it to Sam Smyth and they were down to flow me some stuff. I was so hyped.

Then after being on that program for a couple of years you switched it up a bit, right?
Pretty much. I can’t remember exactly what happened but I think that was a social-media/Internet thing too. Bram De Martelaere, the TM for Krooked and Venture, saw my footage somewhere and offered to hook me up. I was down. Also, it was Bram that put in the word for me at adidas and they started flowing me shoes. I was really stoked on adidas, so I was hyped on that one, for sure. 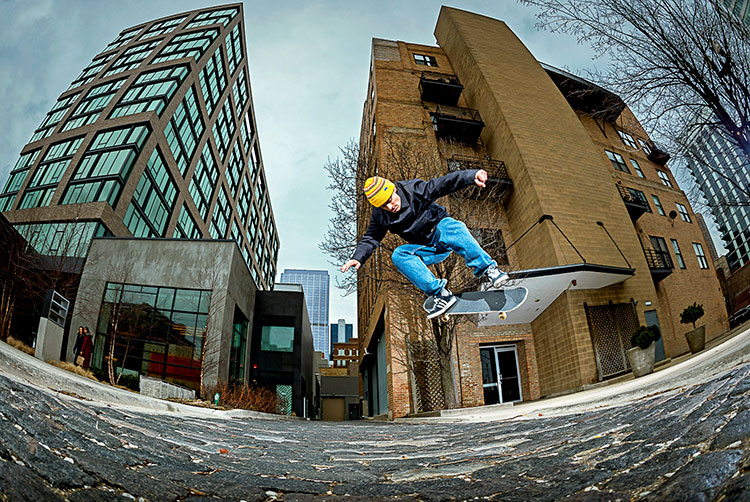 And you’re currently getting boards from Quasi. How’d that come about?
Honestly I was just really stoked on Quasi being kind of a Midwest-based company and their whole vibe, so I asked my friend Jeff Dickson to give my footage to Chad Bowers that runs Quasi.

So I know your brother Blake has always skated, too, but as you were progressing at skating, he became more interested and focused on the filming aspect of things. Did he film most of this part that just came out?
Yeah, mainly. Matt Bublitz, Tyler Cichy and Trevor Owens filmed some of it, too.

How long did you film for this part?
Probably for, like, the last six months, and then maybe there’s a few clips close to a year old or so. 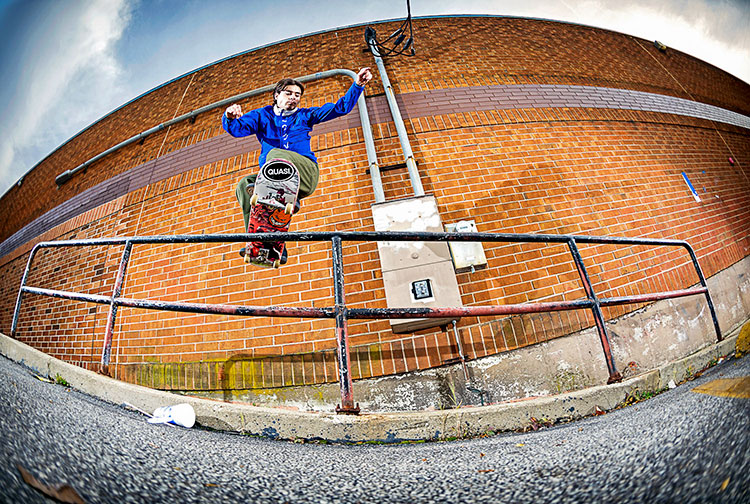 Nick front boards while his brother gets the clip. Teamwork!

Was it filmed mostly in Chicago?
My brother and I took a trip to New York for a week or so. I think I have a few clips in Ohio maybe, and I spent about a month out in LA to escape the winter. But other than that, yeah, all Chicago for the most part.

I remember years ago your brother made that video Ideal Humans that you had a part in, and then a couple years ago you had that Venture part, but other than that would you consider this to be one of your first solid parts as a semi-adult man?
Ha! Yeah, besides the Venture part this is the only part I’ve ever had where I feel like I kinda know what I’m doing.

Did your big bro edit the part, too?
Yeah, I mean, I collaborated with him, but I kind of just trusted him to do his thing.

No brotherly rivalry?!
No, not really. It was pretty smooth and easy. We’re like-minded. We both agreed on the song, no problem. There were maybe a couple clips I wanted in there that he said wouldn’t work, but he knows how to edit and make things flow so I completely understood.
  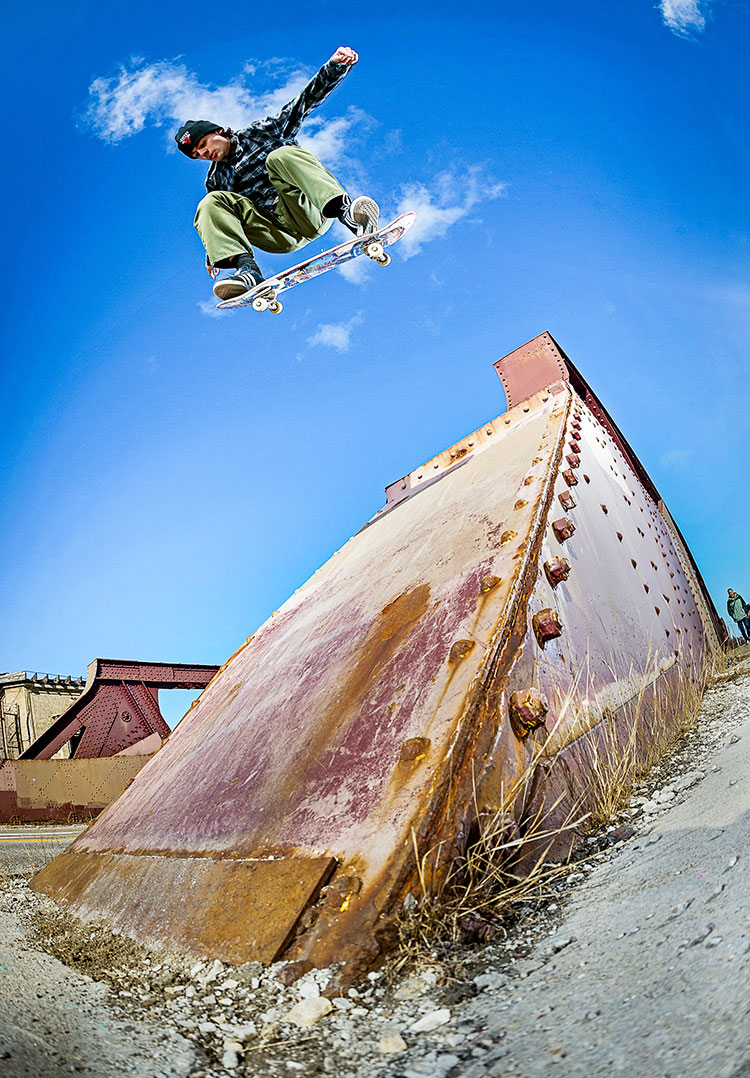 Frontside half Cab flip, in rust and crust we trust

Any specific clips in the part that you’re particularly hyped on?
I’m glad I got the backside noseblunt on the sign. I wanted to do it for awhile but was sort of scared and doubting myself. I just backlipped it originally, but one day we ended up back at that spot and I was kind of randomly feeling it, I guess, and it worked out.

Nice! So what’s next after this?
The weather here in Chicago is just getting good again so we’re pretty motivated to get out and skate. I might have another little part for Uprise skateshop come out soon. I like skating in New York a lot so probably take some trips out there this summer. I’m not opposed to skating anywhere new, but as far as being left to my own resources I’m pretty happy mostly skating in Chicago right now. 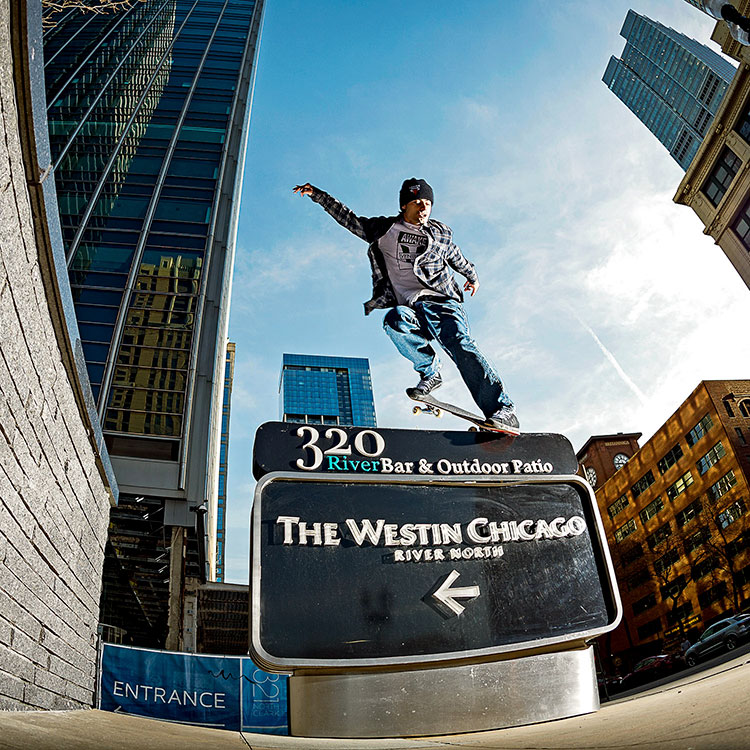 We’re hyped on this backside noseblunt, too. Good work, Nick!