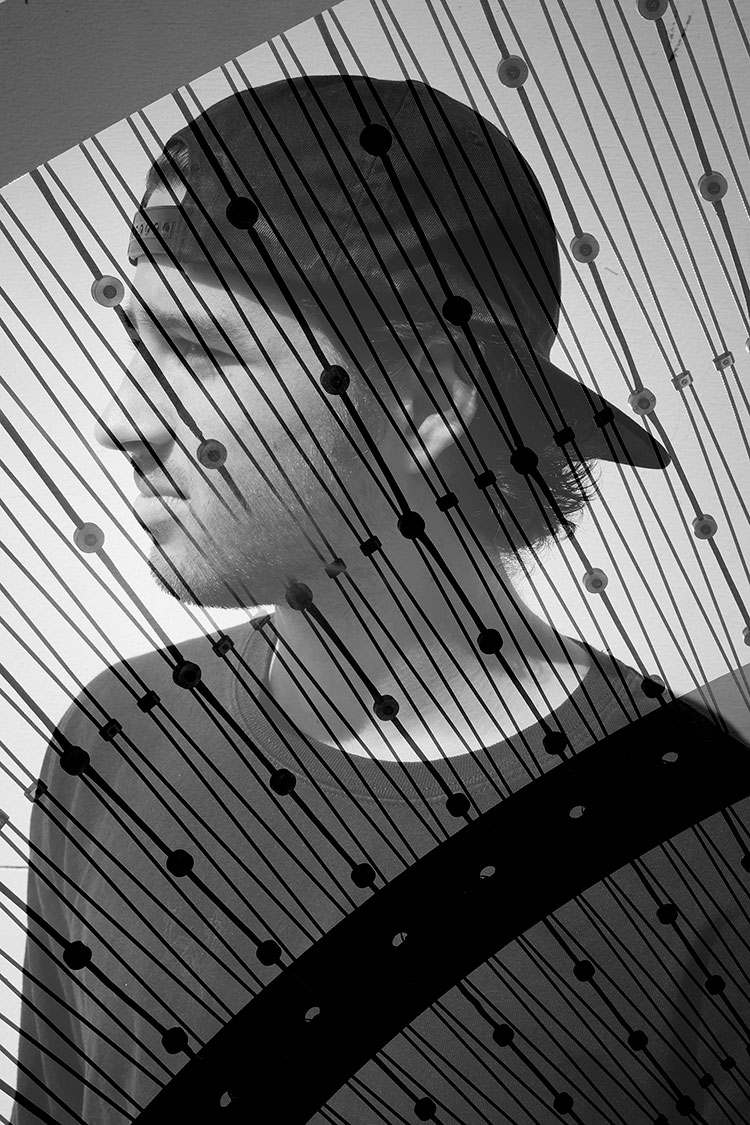 By Jamie Foy
 
Start it off with your name, age and where you’re from.
I’m Pedro Delfino, 23 from Boca Raton, Florida.

What age did you start skating?
I started skating when I was nine years old. I was in third grade.

And you have a sister that’s great at skating, too. Did she start skating when you started?
Yeah, she rips. I guess she started skating when I started, but we never really skated together. She was kinda just in my peripheral doing her own thing. 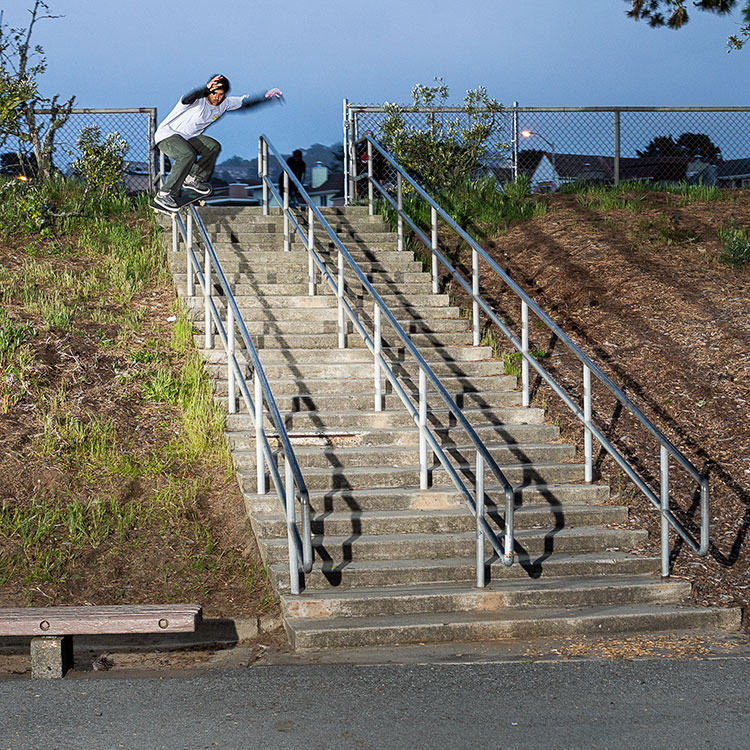 Pinch and hold—lengthy feeble down a thick stack    Photo: Morford

I always noticed you guys have always been on your own thing the whole time. She’s been doing her and you’ve been doing you. What’s it been like recently seeing her around and both talking about the same thing. Has it been cool?
Yeah, it’s been sick. She’s getting really good now and we can just skate together at any time or spot. It’s not like she’s holding anyone back or anything. It’s been really cool, actually.

She’s still in Florida and it’s sick she can hang. When I’m back I miss sessions with you being there but not if you’re in California. That’s the dream. We need that. What was it like growing up skating Boca Raton park?
Damn, skating that park was tight. It was actually a pretty big and vibrant scene growing up, so I didn’t know much around Florida besides that park. The park was designed by a rollerblader so it had big-ass rails, a really big kinked rail, a double set, a kinked hubba and a bunch of hips. It had a horseshoe-shaped bowl, so it was really well rounded but also not built to scale for skateboarders.
 

Do you think that park made it more comfortable for you to skate that kinda stuff in the streets?
I would just watch all of the older kids skate. They would huck down that shit. Michael Hodgman would skate that big-ass handrail right next to the incline. You remember that?

Yeah, it’s called the death rail, right?
Yeah, I think he tried to front board that shit.

That shit was crazy. I think it’s pretty obvious that it has played into your skating a lot. I grew up going there and I would always think it was a really crazy park because it was was so different than the shit I was used to. The main thing you see when you walk in is the double bank with the big ol’ kinked rail. I remember back in the day you tried to skate it. What happened?
There was this little contest going on and I was trying to hold it off for my ender. My banger trick, you know? I went to boardslide the rail and the first one I got on I was leaning too far back and slipped out and went straight to my back. I tried it again and just sacked the middle of the kinked rail—in front of everyone!

Was that the first one you tried?
I had boardslid it before, but it was my first kinked rail and I just sacked the shit out of it. 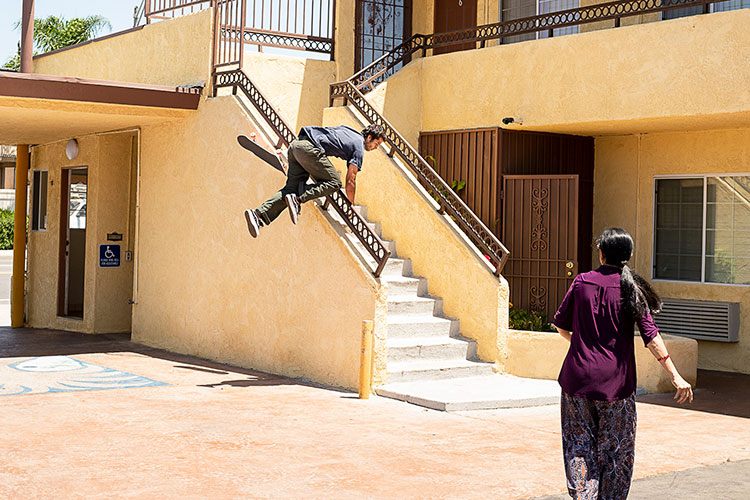 Roof to rib ride for the ladies    Photo: Rhino

That was before I had ever thought of doing a kinked rail and you were handling it. I remember going one time and thinking, Damn, Pedro boardslid this thing? That’s insane! But yeah, we kind of met each other through Island Water Sports. We had the same shop sponsor. I would always see you when it was raining at Ramp 48. You would go there a lot, right?
Yeah, I would go down there and skate with you guys, skate with Josh, Nikolai, Race, all of you dudes. Ramp 48 was kind of the spot because they had a really sick bowl in there. Whenever it rained I would always go there and practice my vert shit. Sometimes I would just have my own little corner.

It’s kinda crazy, as you’re leaving they throw a new vert ramp in there. That thing is pretty perfect.
Tell me about it, man. That thing looks sick. I kinda wish I was home for that right now.

Hey, man, me too. California is tight, but it ain’t nothing like Florida.
Oh yeah.

But how’s it been in California? Stuff is starting to happen for you. What do you feel like was your tipping point to turn a snowball into an avalanche?
Well, the Thrasher cover really helped me get my foot in the door with some of these trips and stuff, but lately I’ve been trying to send it on big shit and that’s been the catalyst, at least for my own skating—getting used to big handrails and just having fun.

But you’ve been sending it on big stuff. I’ve know you for a long time, man. It’s not just now.
I just don’t really think about it. I just see something and just skate at it. I don’t really read it precisely; I just skate at it. Sometimes I land shit and other times I get broke off. That’s kind of just how I’ve always skated. Just send it—don’t even think twice.
  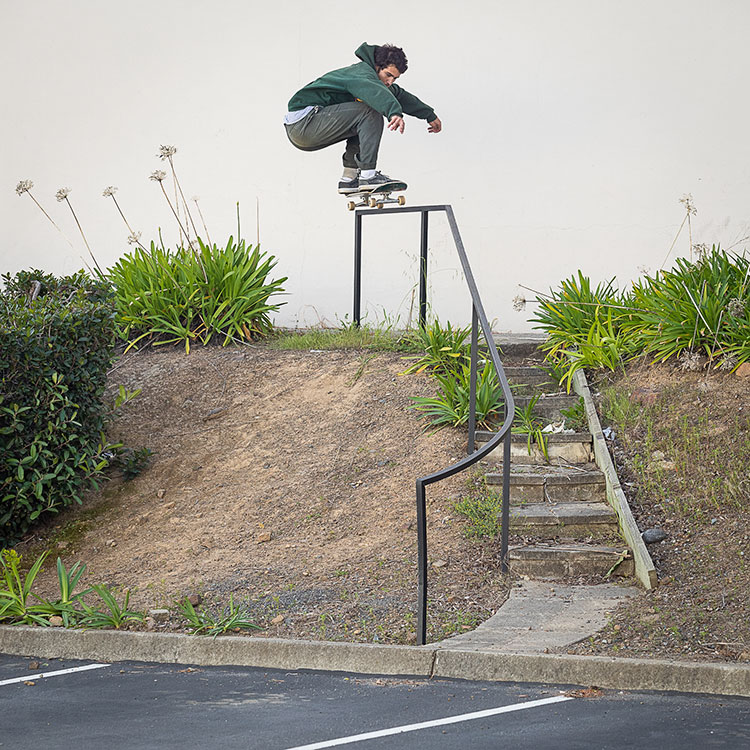 Nah, I know, dude. Just growing up skating with you, you always liked to send it. That’s how I knew you were destined for greatness. I would always think, Damn, this guy’s nuts. I don’t know if you know—everyone else does—but you’re one of my favorite skaters, obviously. What’s it been like going on some of these Vans trips. You were just in China, right?
Yeah, we just went to China for a little residency video type thing that this dude Tommy is filming. It was tight. Being able to travel has been beyond a blessing and has kinda added this new element to skating that makes it a lot more fun. Just seeing the world and different spots in different zones is unreal. It’s unreal how big this world is and how many actual things there are to skate.

What was the craziest culture shock that you got from China?
The craziest thing I saw were that the menus were nuts. Dude, I had fucking goose head! Marinated goose head, like, you know, a duck? They just serve that shit on a plate. I swear I might have gotten sick from it. I had the brain and everything. It coulda had some brain worm.

Never been to China myself but I’ve definitely heard crazy things about it.
You wouldn’t fuck with it.

I mean, shit—they got Pizza Hut, right?
I heard the KFC is bomb there.

Shit’s always bomb. Backtracking a little bit, what do you remember about getting the Thrasher cover? How’d it all happen and how’d you find out? What all went through your head?
It was a mix of emotions when I got that cover. It was definitely unexpected. I remember earlier that day I was skating at the park and I was having such a shitty day. I couldn’t have fun on my board. I was just throwing my board and shit, acting a fool. I was driving home just thinking Fuck it, whatever. Then I got the call from you. I just remember thinking, Well, fuck, I got that thing. I still don’t even know how I feel about it. It just happened; it was fucked. 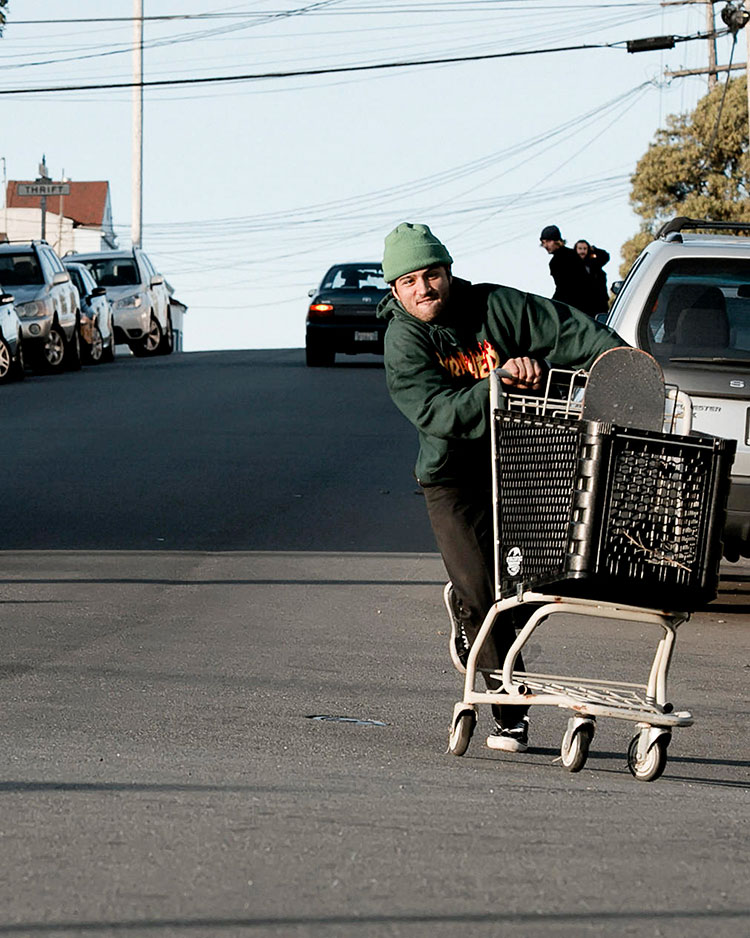 Well, it was completely out of nowhere. I remember first thing I tried to call you, and you didn’t answer your phone. So I called Jon Spitzer who shot it. He was freaking out, and as I was on the phone you called me back so I had to hang up on him to tell you. I really wanted to be the first one to tell you. I just remember you were like, What?! What’s happening?! I’m driving right now! I don’t know what to do! I think I might have told you to pull over and cool down for a second.
Straight up. I was freaking out.

It’s crazy—your day went from being bad to being one of the greatest so far.
Dude, that play of emotions is gnarly.

Yeah, and to me, I thought it was insane because we got back-to-back covers at the beginning of 2018.
That was fuckin’ sick.

Florida dogs! So I know how it happened, but tell the world how the whole Deathwish thing got started. A lot of people saw you were riding Antihero boards for awhile.
I was getting flow from DLX and I went on your SOTY trip to Australia. The first day or second day Lizard just came up to me, all forward, and was, like, “You wanna be on the team?” He was just pushing me the entire time we were there. Then on the flight back we landed at baggage claim at LAX and I told him that I was down.
  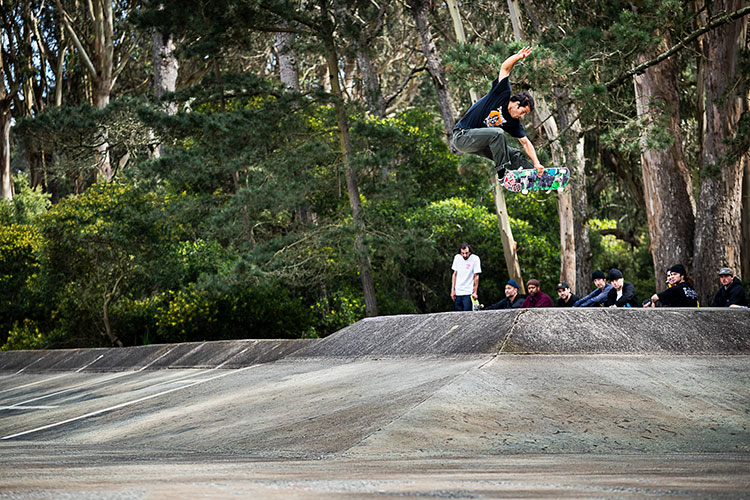 Gerwer stares while Pedro airst Bone it; own it    Photo: Morford

I remember Lizard was just being Lizard, pushing you the whole time, always asking, “What’s it gonna be?” He was really straight up. He asked me what I thought, he asked Kirby what he thought, then he texted the group chat and everyone was into it. So then it got the point where it was just down to you, and I remember right before we got on the flight he was, like, “How long is this shit, 13 hours? Alright, Pedro, you got 13 hours to think about it.” What was going through your head on that flight?
Dude, so much was going through my head. That flight was so long. I was just thinking of my options, dog. But nah, it was tight. It’s sick getting to skate with all you guys and Lizard was so friendly to me; Kirby is so fun to skate with; you’re fun to skate with, obviously. You get me to jump on some big-ass rails and I like that. It brings out a certain type of skating in me. I appreciate it.

That’s why I love skating with you—you’re my dog. We feed off of each other. I’m hyped that you’re on Deathwish now. We’ll start hitting the road together with the whole team, going on our trips. I can’t wait to be back in Florida with you soon.
Oh yeah, Florida trip next month! Oh shit, it’s this month. That shit’s gonna be tight, man—Deahtwish Florida tour.

Yep! Get ready people. Is there anyone that you wanna thank?
Damn, there’s a lot of people to thank. I don’t even know. I just wanna thank everyone. Thanks to my family, Dan Lundy, Kaylanne Diaz, Jamie Foy and everyone from back home, really. Those are my biggest inspirations. 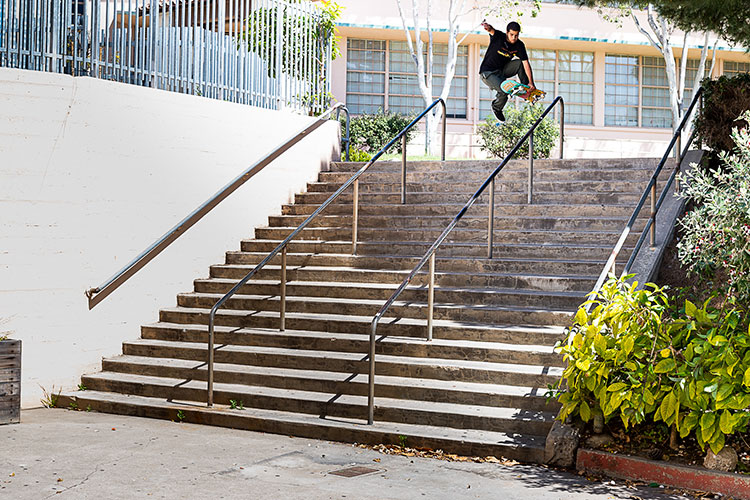 Pedro manhandled this lipslide—no bones about it. You better believe Delfino has a Deathwish!    Photo: Rhino