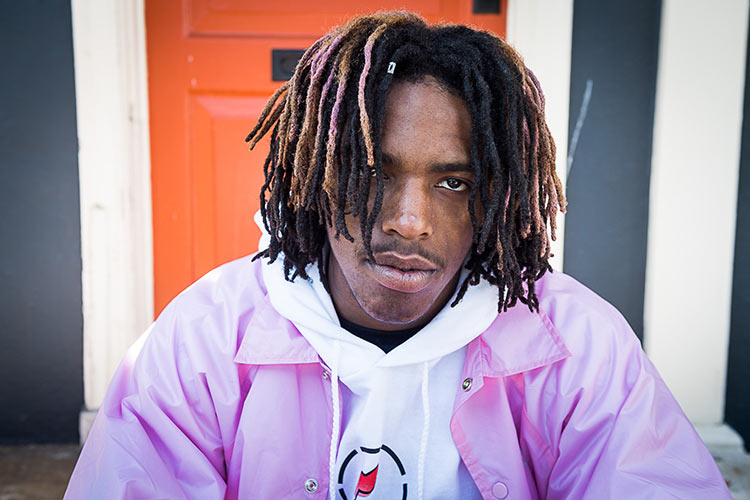 Poohrail came out of the woodwork with a hellacious part and an interesting nickname.  I caught up with him after the release of his Brute part to get to the bottom of his alias and find out what makes him tick. Read on and enjoy some photographic evidence from his recent offering. —Dan Zaslavsky

What’s your real name?
My real name is Terrell Newell.

But you don’t go by that.
Nope.

What do you go by?
Poohrail.

Let’s explain that one just for those of us who aren’t enlightened yet.
It actually came from watching Winnie the Pooh. My big brother gave me that name because I used to love that show. So he just started calling me Poohrail 'cause my name is Terrell and he just put Pooh right in from of it and ever since then I moved to Richmond and everyone started calling me Poohrail. Then I moved to Oakland and nobody knew about it and I just brought it back up again. 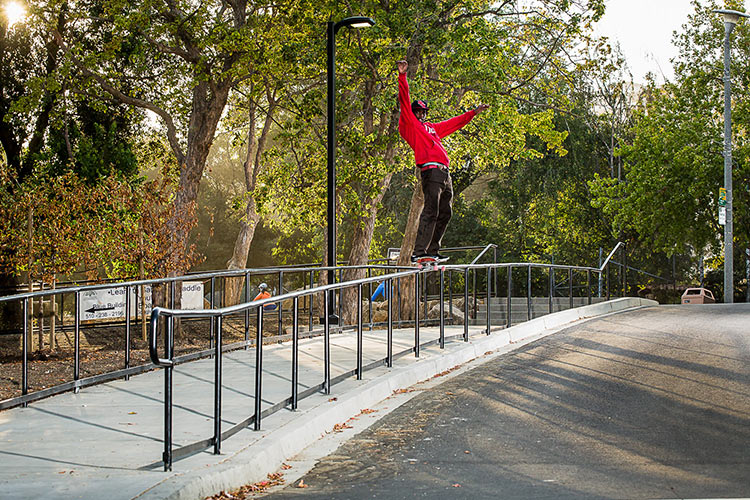 What about the rail part? Was that already kind of a mix of what you were into: Winnie the Pooh and skating?
Honestly, at first it was Poohrel and then after a while I started skating flat bars and people started calling me rail.

How old were you when your brother started calling you that?
When I was four, a little kid.

So it'd been going on for a while and then it transitioned into Poohrail. I always thought it was because you shit on rails.
I mean, that's what everyone would assume. I don’t want to be cocky. I do do my thing on the rails but it's not what I come from. 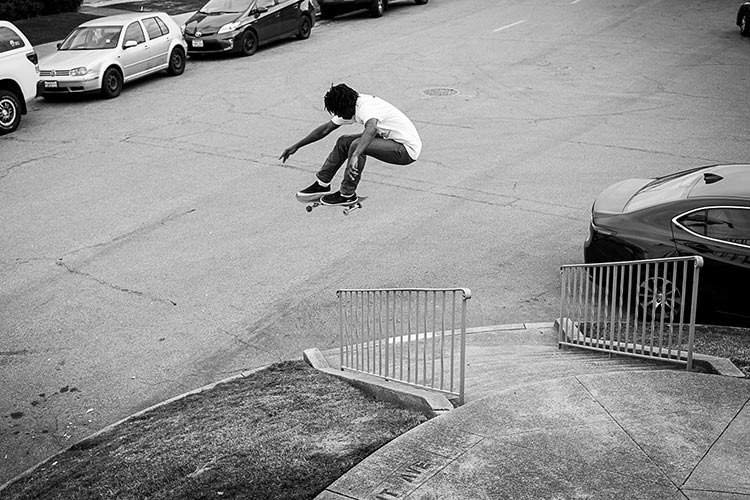 He’s not only jumping on them, but over too. Kickflip     Photo: Carabarin

Your new part has a lot of rails too.
Mmm hmm.

I heard that all your friends and family call you Poohrail, your mom, girls on the street.
Yeah, thats the name. Don’t wear it out.

When do you use your real name?
When I meet new people, only on accident. Like, I try to introduce myself as Poohrail, but I slip and I say Terrell and then I’m like, fuck, and I say Poohrail to their friend and Terrell to this other friend and they’re, like, "Wait. What?"

Who are some of your favorite skaters that go by nicknames? Like Catfish, Lizard King, Furby—
My favorite skater is TK, Terry Kennedy.  Moose go crazy to me. And Furby go crazy too. I fucks with P-Rod as well. 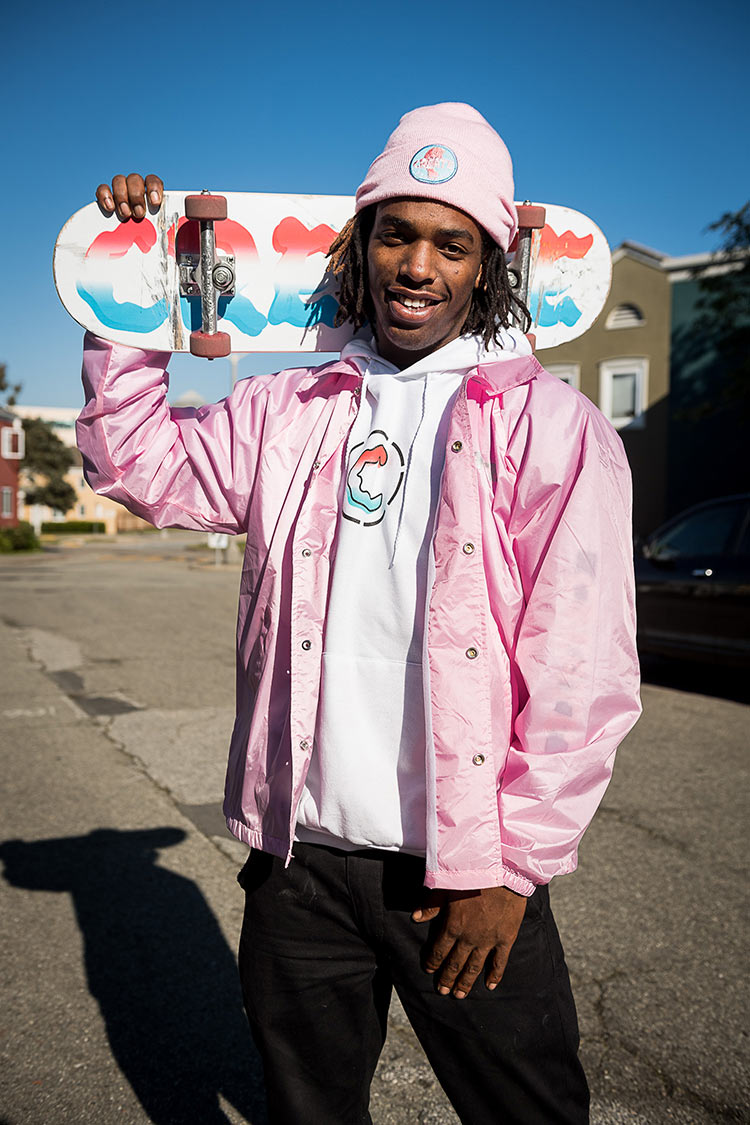 Where are you from?
I’m originally from Oakland, California, but I'm well known all over the whole Bay Area.

Representing the whole Bay, you don’t discriminate. Where you staying right now?
San Francisco, up in the Fillmore with my partners.

What's up with the SF crew right now? A lot of it is the Create dudes but you're not on Create.
Um, yeah, I actually am. I just got on.

Congrats.
Thank you. Just got on pretty much and, yeah, we’re all trying to come up with one big family.

Yeah, 'cause those are the dudes who are really kind of taking over the city right now. There's no one really doing it.
Exactly, and I want to be a part of that and so I hopped on the boards real quick. 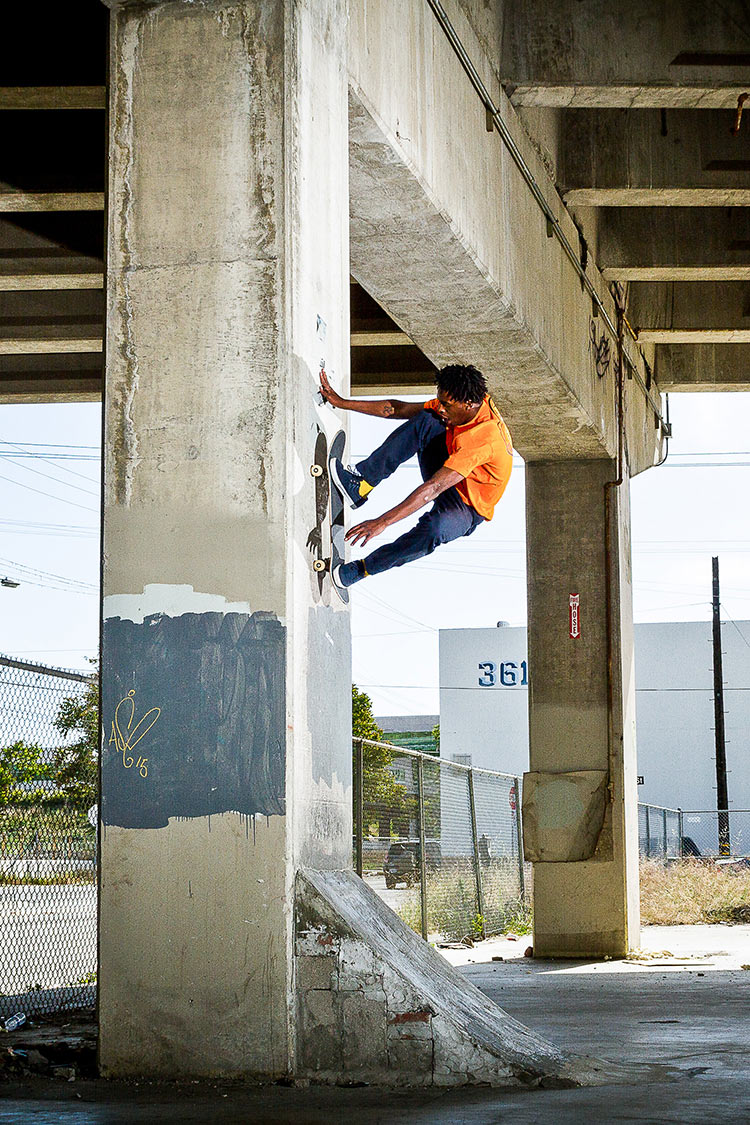 You were on DGK before that?
Yes, I was.

Getting some flow.
It was sick. Definitely it was a dream come true to be a DGK because I always looked up to them as a little kid. I always wanted to be a Dirty Ghetto Kid. Riding for them is sick but I have to make more moves and handle my business, you feel me.

How old were you when you started skating?
Four years old. 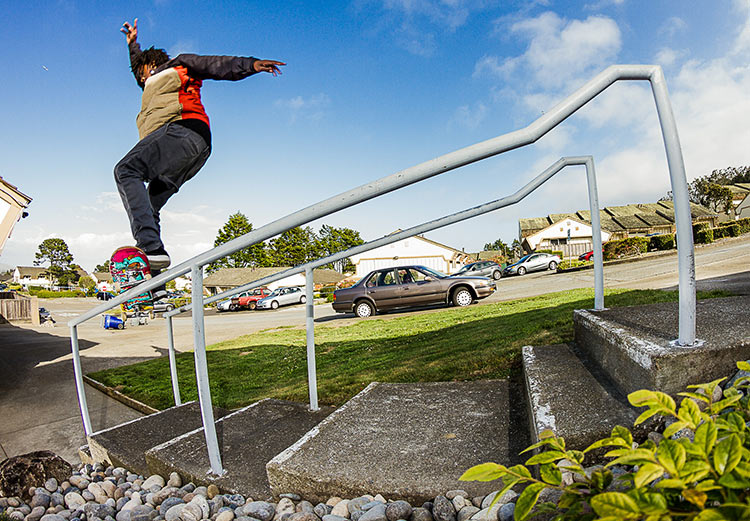 What was skating like for you back then? Like, "We got a black dude skating." What was that like?
Honestly, when I first started to go skate, all the little hood rat dudes they were, like, "You gonna bust your ass." They were telling me that you're not supposed to be on a skateboard. I was having fun. I was just a little kid.

It's kind of different now because everyone skates but back then it was, like, maybe considered a white kid’s thing.
Honestly, I didn’t care what anyone thought. I was just having fun; that’s all that matters to me.

Did you have other black friends who skated?
Not at the time. When I first started to skate it was really just my big brothers and I skating. All my brothers that I grew up with. I have brothers on both sides of my family, but the ones that I grew up, all three of them skated but they all stopped now.

So that’s how you got into it?
Yeah, I saw them skating and then Tony Hawk's Proving Ground and Underground games, the Thrasher game, the X Games game. Literally all those games got me motivated. I was, like, "This shit's sick.” 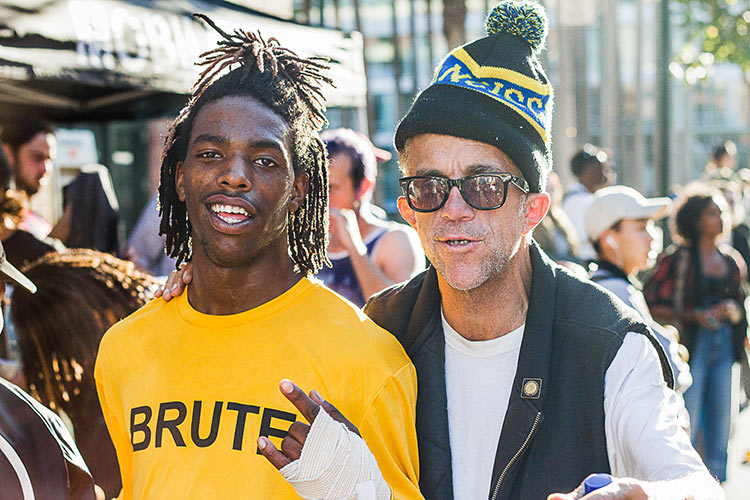 What does brute mean to you?
Brutal. But more than that: Get buckled, get buck, go big, don’t go home, just don’t buckle, go big.

Who came up with that?
Sam Chao but, damn, our whole little group.

What's up with the ladies in your life?
Man, its looking sorry. I just had a GF for two years, literally. It was cool but, man—

Now you on the rebound?
Shit yeah, you know it. All the ladies, what’s up?

So the ladies, they call you Poohrail too?
Yeah, they do. They all—I don’t want to say it, but yeah, they love me. I’m a lovable type of guy. 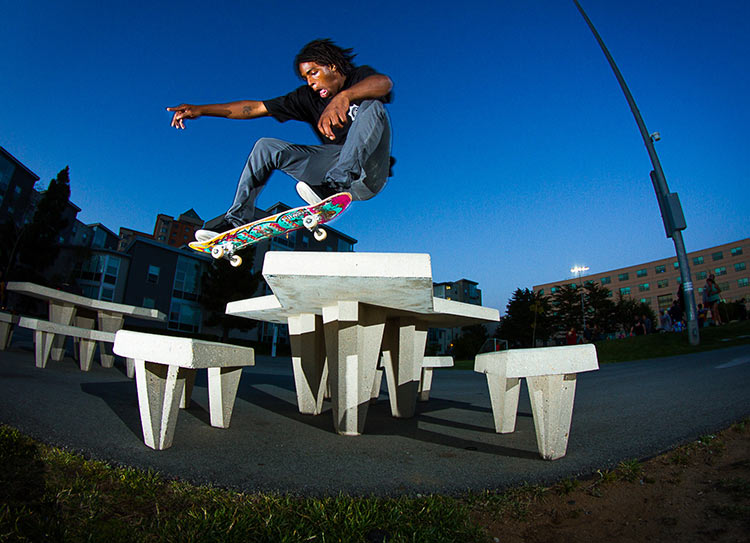 I heard you like big girls.
Ha! I actually do like 'em thick, you know. Thicker than a Snicker. More cushion for a pushin', you feel me?

White girls, Black girls, Hispanic, Asian?
My ex is white, but honestly I have no type, so I like 'em all.

I heard that sometimes you drool on them.
Ha! Only when I’m off the lazies, man. Nah, I’m just playing. I don’t drool on 'em, but actually I did drool on this one girl and I was, like, really, really exhausted and we were up cuddling watching some show and I was trying to stay up, trying to make a move, and then I was too tired and I started drooling on her head. 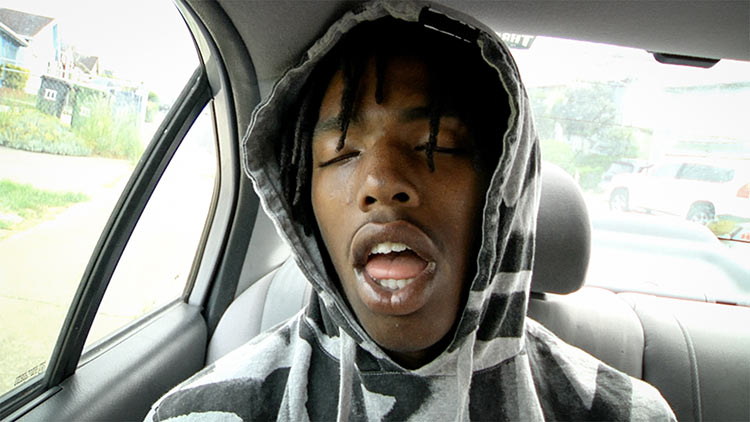 I heard you have a tendency to fall asleep in certain places often just sitting straight up.
I ain't gonna front; I almost fell asleep on the bus ride here. I can literally sleep anywhere.

Thats better than having sleeping problems where you can’t fall asleep.
Yeah, exactly. I’m glad I can sleep anywhere. I’m glad, but it kinda sucks because I have the worst sleeping face. If you ever see my sleeping videos or any pictures, it's the worst, snoring and everything. I’m asking for it to get drenched, straight up.

Why you say you’re "from this Earth"?
Basically, me and the homies John, Sam and Jordan were out in LA in the middle of traffic and this random guy comes out and is just staring at John and says, "Do we have a problem?" I was just so confused, like,  "I don’t get why you so mad, bro," and he just started to press us and he was, like, "Get closer to the car so we can cut your fingers." He had a fat-ass blade, like, five inches long—that crazy shit. He asked me where I’m from and I told him, "I’m from East Oakland," and he was, like, "You not even from Oakland. I got family in Oakland." He said, "You ain't even from nowhere," and I’m, like, "Bro, I’m from this Earth and not trying to argue with you or do anything with you or make you have a bad day. I did nothing; you came up to us tripping.” 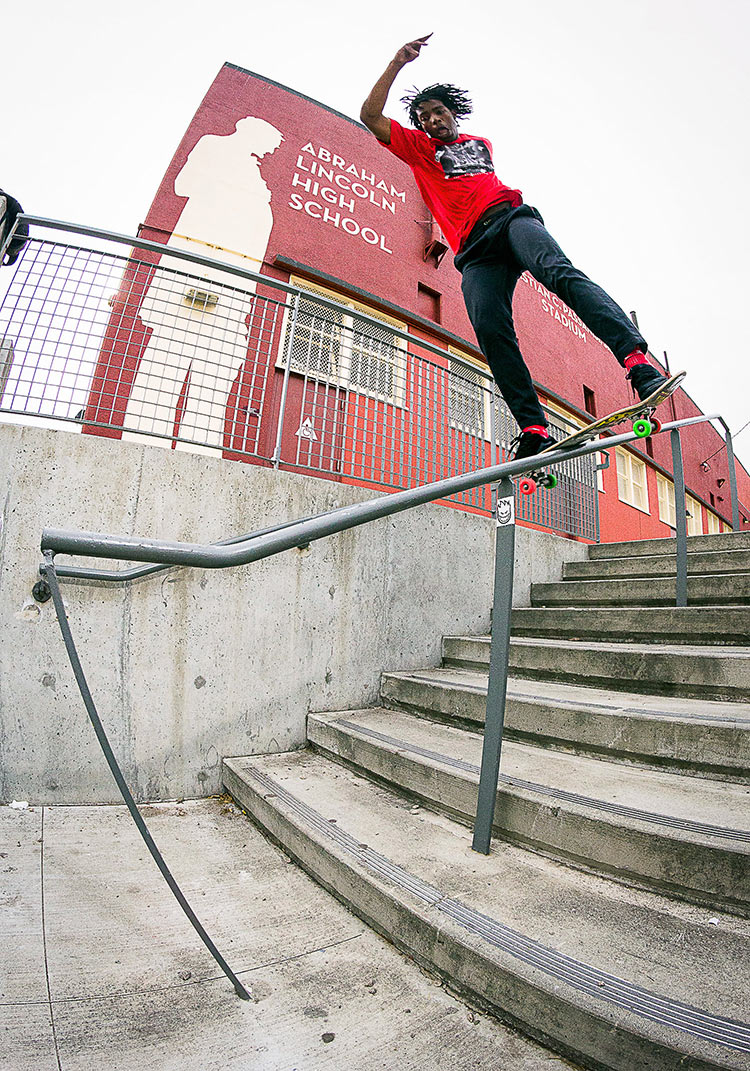 What you get for Christmas?
Ah, my mom, she hooked it up. She came through. She lives all the way in Ohio. She made me a homemade beanie and she bought me this bomb-ass fucking caramel popcorn that we used to always eat when I was a little kid and she got me a GoPro with all the accessories and shit. 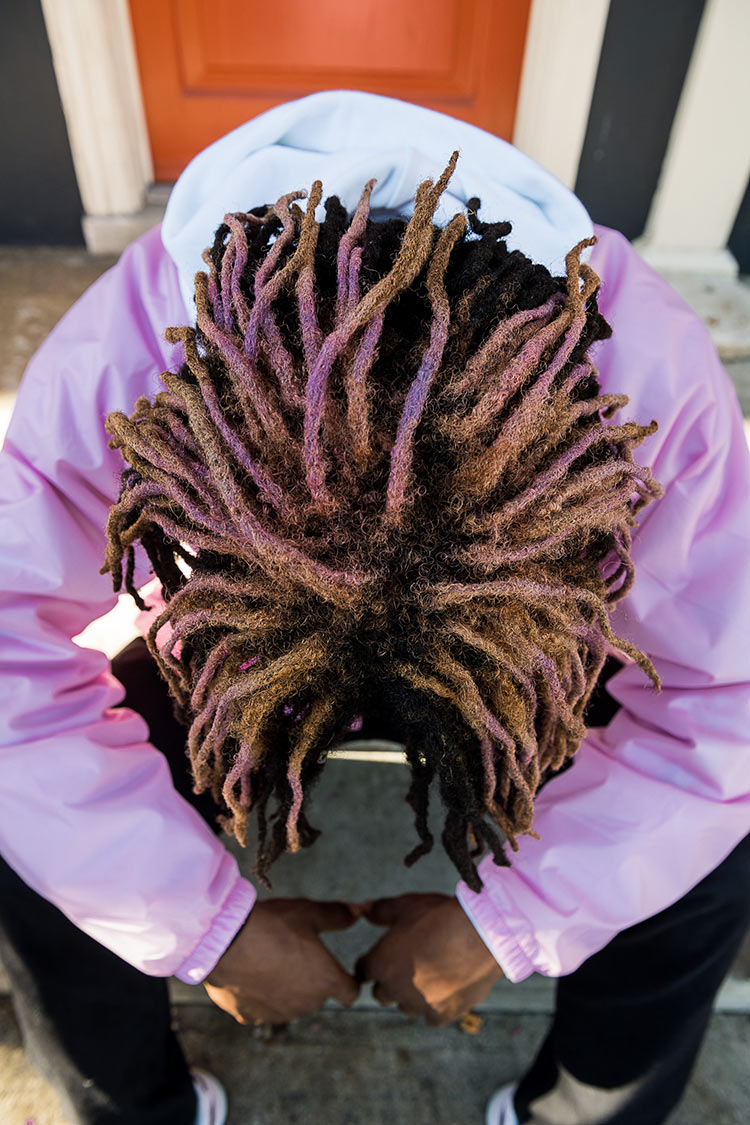 What about the love for your dogs?
Oh, man, I miss my dogs so much. They’re with my ex girlfriend and I can’t even go see 'em right now, but I was just talking to my homies the other day and reminiscing about my dog Peaches and Chopper too.  Miss him too. That's my baby girl, I swear.

You won’t be able to go see 'em?
No, its fucking rough.

Whats up with your hair?
I dyed it lavender first and then, like, washing my hair it just faded to pink and then to brown, like, golden brown and now it's kind of a rose gold. But I was kickin' it with hella girls and they were, like, "Let's dye it rose gold," and I’m, like, "Alright, yeah. That's a sick color."

I heard you got rapping skills.
Uh, kind of. I don’t really be rapping. It's only really after the session after everything is over with when we're kicking it or we at a party and it's dry. We start just going in a circle rapping. 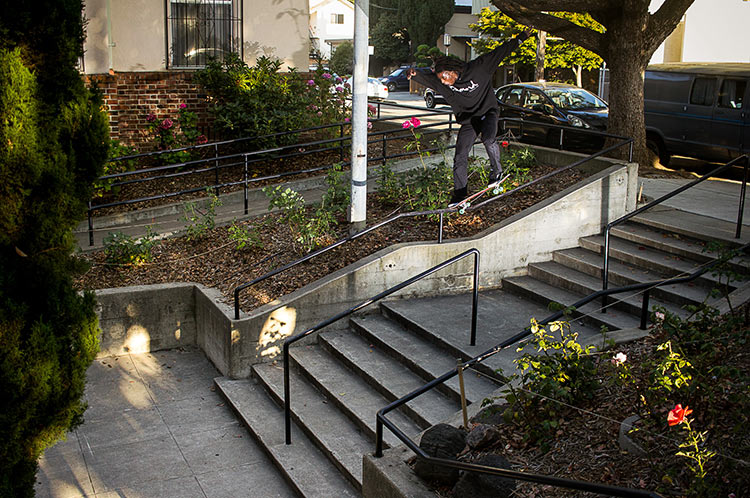 What do you do with all the cash?
Splurge. Spend it all on food or whatever I need to spend it on.

Whats up for 2017?
I got some new stuff coming out for Create in January. We coming out with a lot more moves, more ads, a lot more everything coming soon.

Getting some mayonnaise.
Mayonnaise, fat bitches, anything.