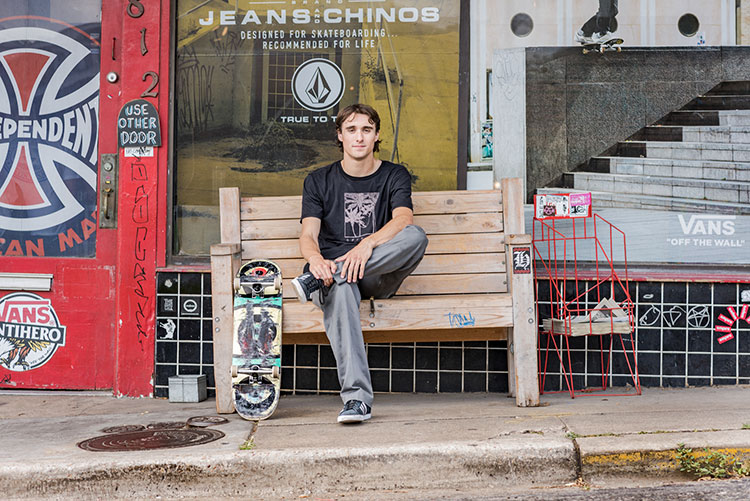 So run me through filming for this Ryan, Brian and Mark part. Because of school, can you really only film Friday afternoon through Sunday mid-day?
Yeah, Monday through Friday afternoon is school time. Sometimes I’ll skate with my friend Miguel during the week at this skatepark in Seguin, TX, just to get a skate fix in and relieve some stress.

You know I grew up in Seguin, right?
I think you told me one time, but it’s hard to imagine how you got so involved with skateboarding being from there. That park seems misplaced, but I'm sure it's a welcome addition for the skaters in town. 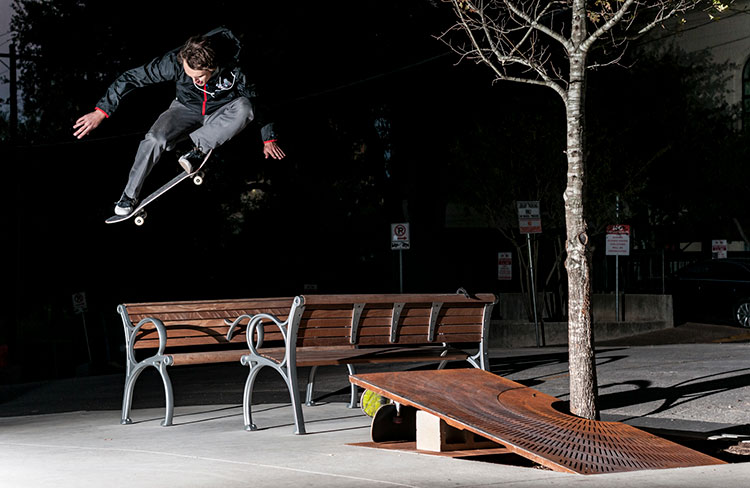 Did you ever entertain the idea of skipping college and moving to California to be a skateboard star?
It’s hard to pass up the idea of traveling the world and getting paid to skate, but I never planned on skipping college. I had hoped to someday turn pro and take online classes, then fully commit to school when skating ran south. That plan didn't pan out, so here I am still in Texas, close to family and in college full time.

Why do you still live in Texas? You're old enough to move.
I’m old enough to move, but Texas is where my family is, Houston specifically. Austin isn’t that far. It’s home to numerous semi-conductor companies and it’s tight.

Do you think the dream of a sustainable skateboard career is unattainable for most who seek it out?
I think you have to run a risk/benefit analysis before considering a pro career. For me, the risk was too high for the reward, therefore making it unsustainable.

Are your parents supportive of your skating?
Not anymore. Here’s the most recent text my dad sent to me, “You need to get an internship on top of your classes and stop playing around on the weekends.” Regardless, I wouldn't be anywhere near what I am without his early support in skating.

Did you really grow up in a skatepark?
Ha! No, but my dad built one for me and turned it into a business for a few years. Just like any skatepark who rents their property, it failed within a few years. We developed a small skateboard culture in Katy, TX, with unforgettable times, though. 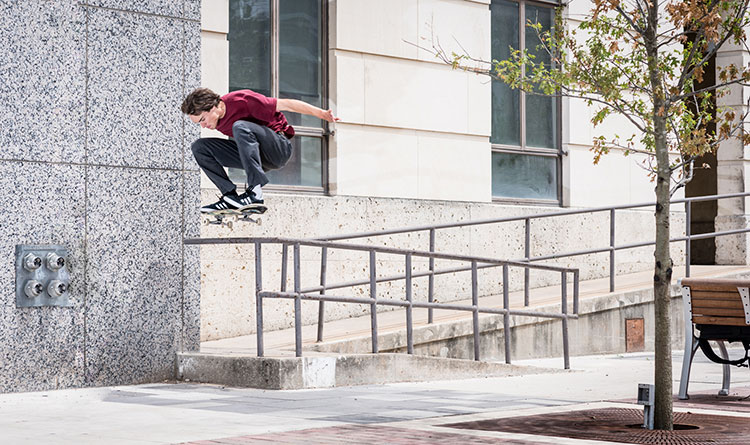 Unlike his private skatepark, this frontside nollie was a total success

What was the park called? Did any notable skaters hang out there?
Adrenaline Skatepark. Ben Raybourn came over quite a bit, but we were longtime friends before that. Another big name that lived in Katy for a minute was Ben Hatchell. He just destroyed all our contests that we put on, so it was more a contest for second place when he entered. Ben was always super friendly. Also, Todd Falcon went there quite a few times and held some concerts with his wife. Ben Raybourn and I actually skated for Falcon Skates and did demos at random middle-of-nowhere parks.

What was hanging out with Todd Falcon like? Did he ever ask you to be in one of his movies? Did your parents think he was strange?
He’s a kind and funny dude. I think he invited me to join in on a zombie skateboard movie he was working on at the skatepark in Humble, Texas. If I remember correctly, I was too scared of zombies, so I couldn’t join in. We all thought he was strange, but skaters are strange. Todd was just really strange. I loved it and had fun as a helmet/elbow-pad-clad warrior on the team.

You're pretty adamant about filming complete parts with only one videographer. Explain that dynamic.
I only shoot with filmers and photographers I trust and I like working on one project at a time. It also becomes much easier to manage what’s been shot. Plus, it’s nice to enjoy a single group of friends on the weekends. Small groups create closer friendships and are more productive.

How long did you and Calvin Millar work on this video part?
Less than a year. We filmed on the weekends during the semester. I also filmed quite a few clips with Chase Walker during the week since he goes to Texas State with me. Some clips were from my bro-cam brother Kyle. 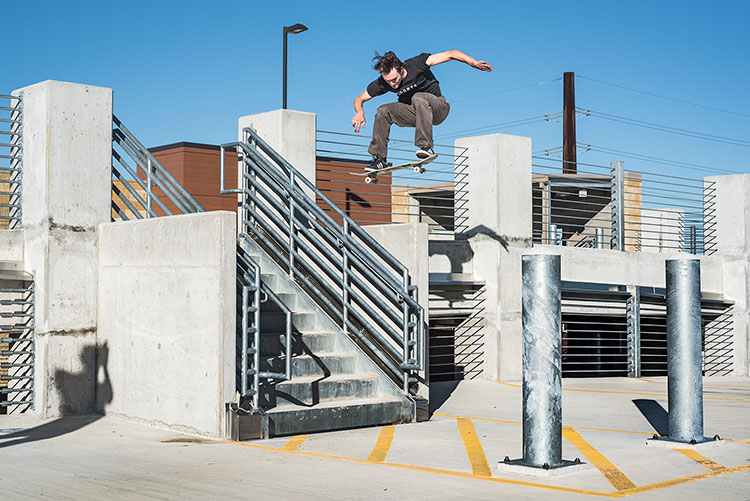 What's your favorite trick in the video that's not one of yours?
It’s a tie between Brian’s drop-down nose manual and Mark’s kickflip sex change. I don't understand either one.

What was the most fun trick that you filmed for this thing?
It’s a tie between the noseslide, the ollie through the gate and the downhill nollie heel. I like the ollie because the poor guard couldn’t help but get hyped, the noseslide because noseslides are the coolest, and the nollie heel because it was the first one I've ever filmed—which might have been obvious—regardless of having skated for 16 years. But who am I kidding—all of them were so much fun; that’s why I did them. 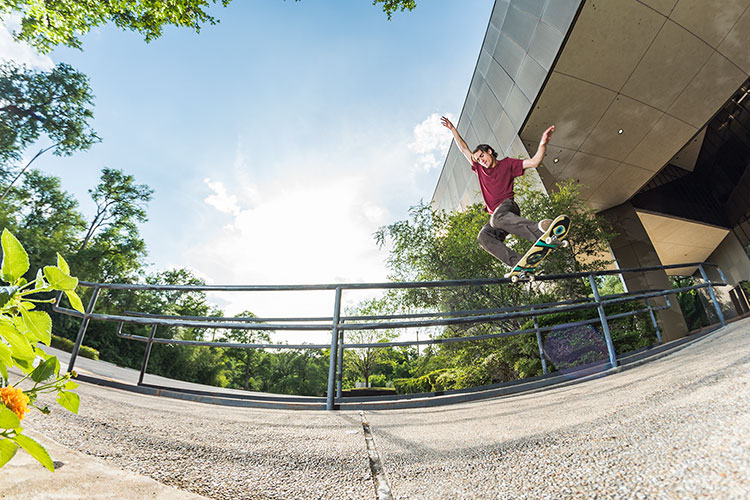 This is your second full part that you've put out this year. Are you gonna go for three?
I’m definitely going to be skating for some project. It might not be a typical part, though. Calvin has some cool stuff in mind and Program has some cool concepts, too.

Speaking of which, why in the hell did you decide to skate for Program when you could have easily gotten on a larger, more high-profile company?
I feel like I belong with Program. The people that run it are right, the art direction is tight and it's close by. I also like to have a hand in decisions.

In your opinion, is there anything about Texas skateboarding that makes it different from other skate scenes in the world?
The skateboard-culture diversity is what makes Texas unique. LA, London, NYC and SF can all be characterized. I dare you to take a handful of skaters from Texas and say they all skate alike. We also have a we’re-from-Texas attitude, which isn’t the coolest by any means, but it kinda represents the independent styles. 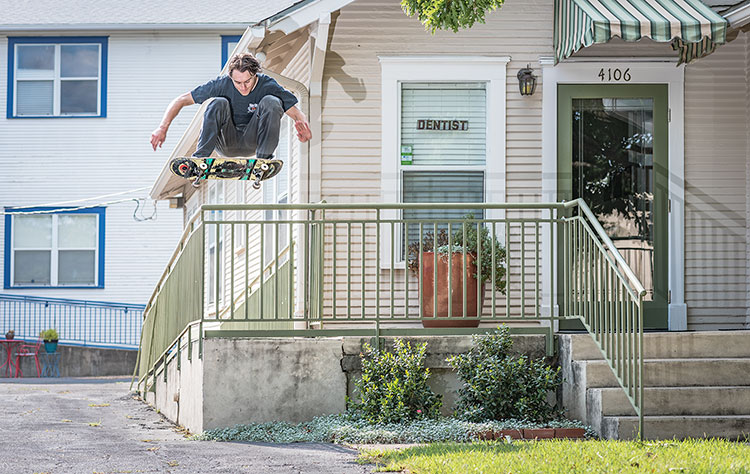 A novocaine down the rail would have been easier to caption. Still a good frontside 180, though

You go to London to skate every summer, right? What's so good about Europe?
Every summer for the past five years I've gone to London for the culture shock and to check out the architecture. I’ve only been to London, though. I want to go to other countries out there, but something always whispers in my ear, “Stay here, Ryan. Stay here where theres a free place to stay, where you’re guaranteed to be productive and where your best friends are.” I run into crazy situations while I’m there anyway. I’ll go to other countries in Europe eventually.

You've got a pretty explosive skate style. What's your take on low-impact shuffleboard style skating that seems so popular right now?
I just prefer explosive and spontaneous skating. Shuffling and no-comply shove its are tight, though. I also prefer Ella Fitzgerald and Nat King Cole, but think Slayer is great, artistically, if that helps gage my range of acceptance.

Did you really grow up skating with Kyle Walker? Are you still homies?
It's nuts how far back we go, like, elbow pads and knee pads far back. He'd drive down from Oklahoma and we'd skate contests together. We got him snowboarding and went to Six Flags together, which was fun as hell. When he came down to skate, my mom would take us to Tranquility Park with our helmets to “street skate.” I miss the times we had. At somewhere around ten-to-15 years old we kind of separated and never spoke to each other again. I still wonder why, but I'm sure it has to do with the maturity gap between us. I'd still like to keep in touch if it was up to me. 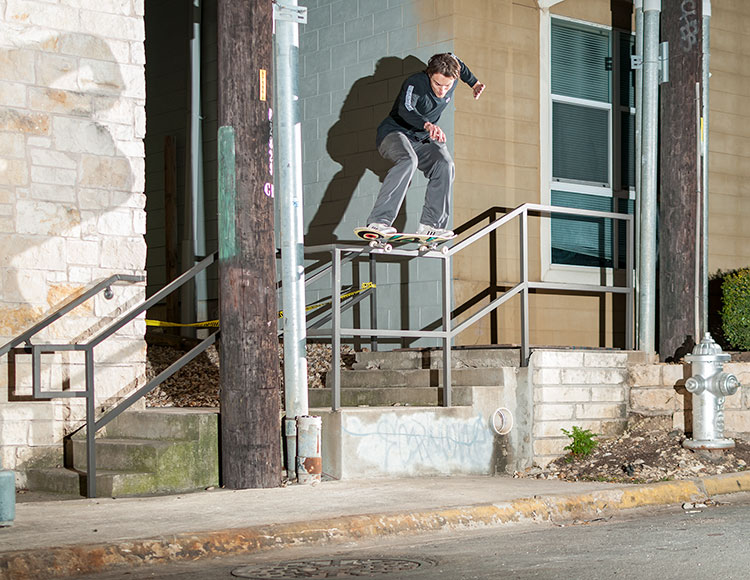 Get in where you fit in. Tight-squeeze 50-50 transfer

Do you romanticize your youth at all?
I constantly think about the times I had before high school, playing all the sports and games a kid could play.

How old were you when you started skating? Did you continue to play other sports or did skating steal you away from them?
I started skating when I was six, so over 15 years ago. I played sports the entire time I was skating, and still do today. If you can think of a popular American team sport, I’ve played it and loved it. But skateboarding has always been number one. It’s just nice to be multilingual. It’s easier to enjoy people outside of skateboarding that way. 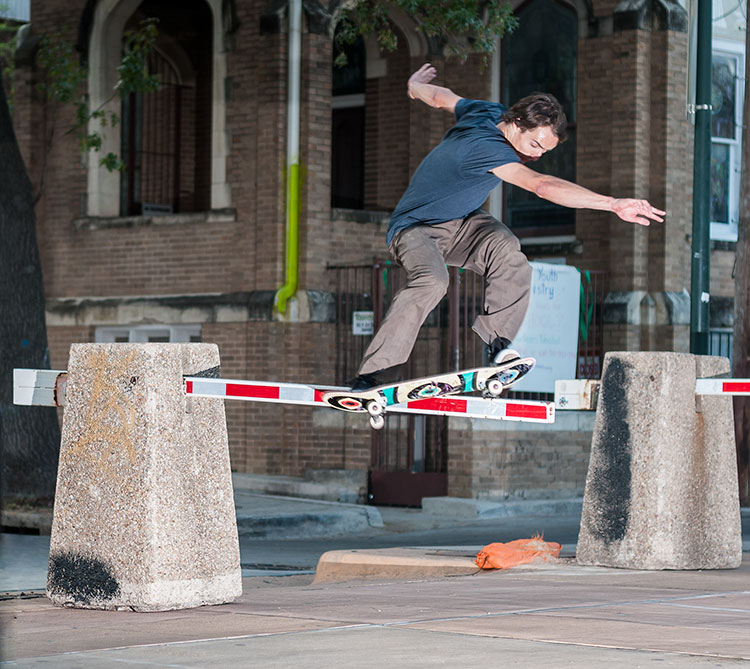 You're pretty silent on social media. What's your problem? Don't you want to share everything all the time?
Ha! Everything is wrong with me! But seriously, I just don’t like sharing stuff unless it has a good purpose. Either I promote others to have fun or promote the companies that support me. Most of the time I’m not skating; I’m building imaginary computer systems or working on school work. I know that stuff doesn't appeal to many, so I don't post often. I'm also a bit to myself.

If you could have named yourself instead of your parents naming you, what would I be calling you right now?
Sweet Lou.

I think that's Louie Barletta's nickname. Wanna take another shot at it?
Dammit. Dustin Knight will do. 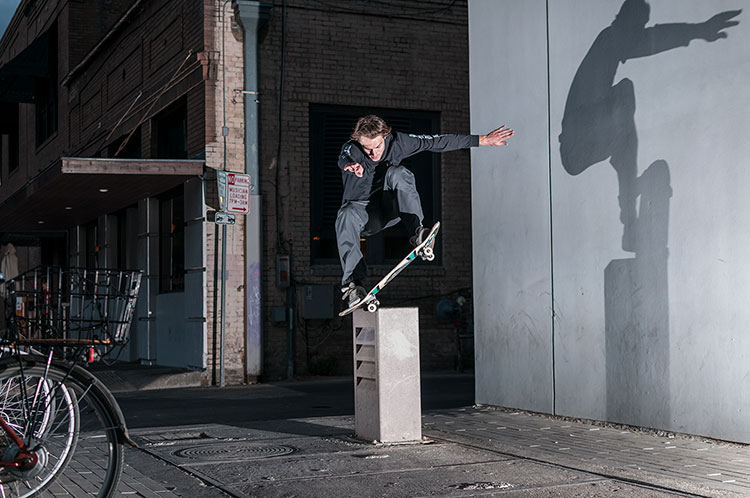 Dustin Knight prowls the night, 180 nosegrind on a bonk box

Do you keep up with all the skate blogs and the videos? Do you care or do you just want to shred?
Nope. I'm on all the PC building forums you can think of, though.

So you're most likely going to be an engineer. That being said, what are your skate goals since you're not concerned with making a living from rolling around?
I just want to enjoy skating and encourage others to do the same. I'd like to be able to promote it, too. It's the best stress relief I can find and it's great for one’s wellbeing.

Do you have a favorite skateboarder?
Kyle Cielencki, hands down. My style originated from his and his scholastic work ethic rubbed off on me.

How about a favorite video?
Excluding videos that my friends have made, probably Atlantic Drift: Episode 2, the one at St. Paul's. Holy hell that video made me want to skate. 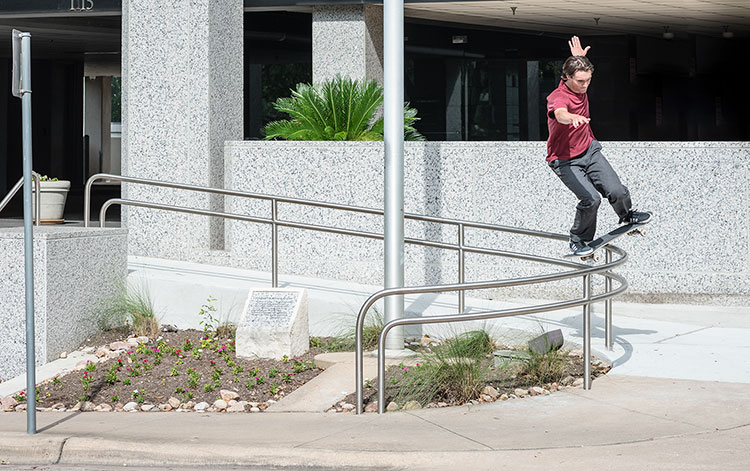 And… curtains! Curved boardslide to close out the vid. Good job, Mr. Thompson. Now get back to class!

What are you working on next?
I’m working on microprocessors and workstations. The IEEE Texas State robotics team and I are gonna kill it this year. I also work as an event videographer to afford stuff like traveling, so I’m keeping busy. And I'm ready to work on whatever skate projects my sponsors want me to take care of.

Who are your other sponsors?
I’m flowed by adidas, Bones, and FKD. I still have a wee bit of hope for an invite on an adidas trip one day. It’d be nice to break the college or skate divide.

You got any closing words?
Remember that nobody is cool and skateboarding is supposed to be a game of trying dumb stuff to see what sticks.