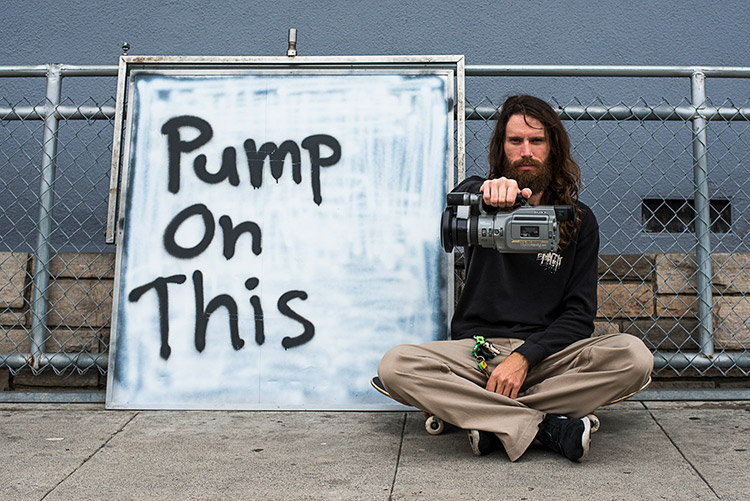 Shane Aukland, the man behind it all

What’s up, Shane? Let’s get right into it. How did SK8RATS first get started?
It all pretty much began back in 2004 when I was in eight grade and my friend Jake’s dad would call us skate rats. I made my first little full-length video and called it SK8RATS Volume 1, and then when YouTube came about I made my account and called it Sk8rat and it just all stuck from there. After I quit working for the Berrics in 2013 I started making some gear and getting my business license and got the trademark for SK8RATS and we’ve been pumping ever since. 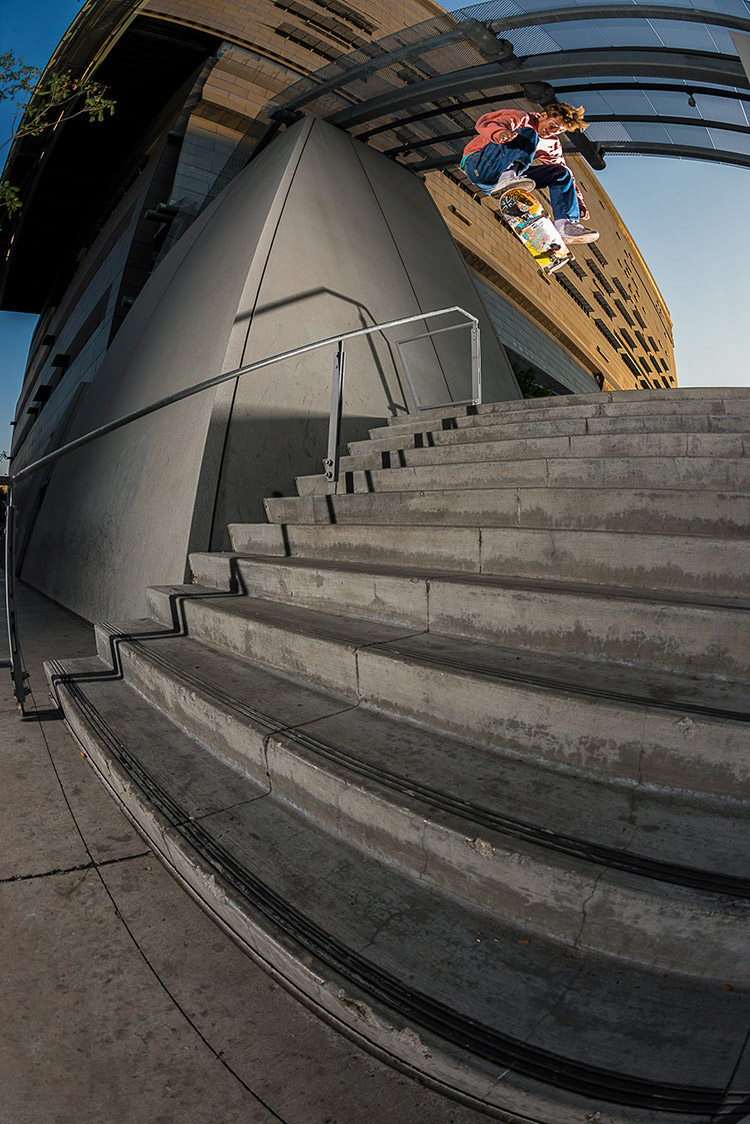 Speaking of pumping, what sparked the idea for Pump On This? Who has parts in the video and how long did it take to film?
After our last SK8RATS full-length Rat Poison in 2014, I took a year or two off from really working on anything or saving clips for another video. But eventually you kinda get back in the rhythm of filming with a group of people and you just start saving footage and you got a new one in the works. The name of the video came from Jesse Alba’s intro in Rat Poison. We had this security guard kicking us out and we just kept asking him if we could “get one more pump” over and over seeing if he would say it and he did. Ha! He hit us with, “No pumps on this,” and Pump On This was born! We got full parts from Travis Harrison, Kristin Ebeling, Rob Wootton, Chris Blake, Shari White, Brett Sube, Brian Baca, Cory Kennedy and Sebo Walker. 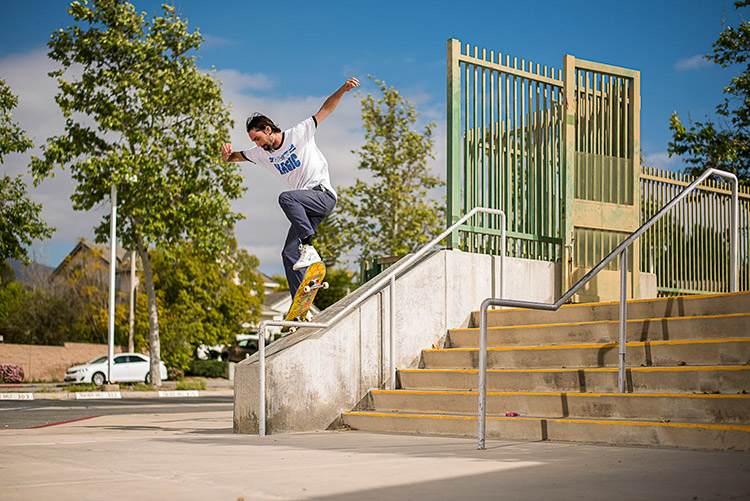 Chris Blake channels some magic, ollie over to noseblunt

That’s a heavy line up. It seemed like not everyone got to film for the whole time, though. No skate video ever comes out on time, but the setbacks for Pump on This just seemed to keep coming. Run us through some of the injuries and complications during the filming process.
So very true—there’s always gonna be some setbacks when it comes to skateboarding. Some of the main challenges were that half of us lived out of California. Cory and Kristin live Washington, Shari lives in Vancouver BC, Rob and Chris live in Florida, so filming with them was few and far between. I had my camera bag stolen out of my car with my VX, Super-8, and laptop. Kristin had an ankle injury. Travis tore his ACL. Cory had his accident. I also ended up breaking my collarbone twice, once from skating and the second time I slammed filming and sacrificed my collarbone to save the VX. 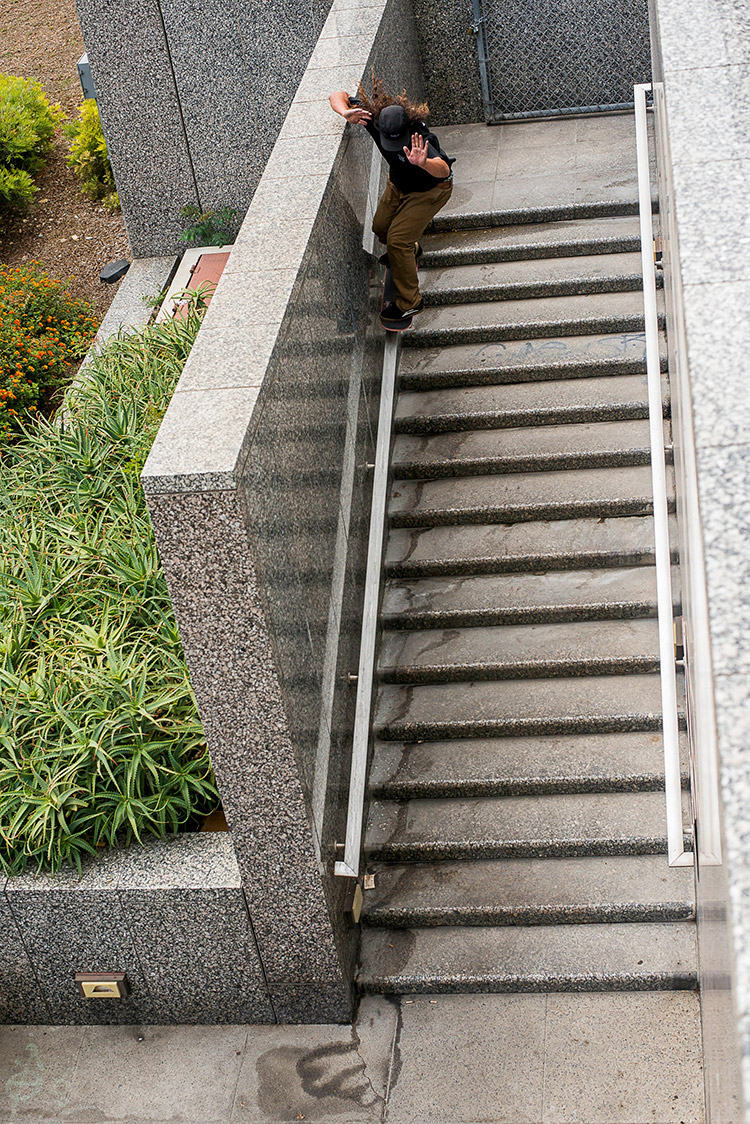 Get in where you fit in—Brett Sube, frontside 50-50

That’s quite the price to pay to save the camera, but I know you’re a lifelong advocate of the VX1000. What’s the best and worst thing about filming with one?
Long live the VX! Nothing compares to the VX1000 audio, and the MK1 is just way to good for capturing skateboarding. Filming VX won’t give you arthritis in one day of filming either. That’s a trick question, though—there is no worst thing about filming VX! 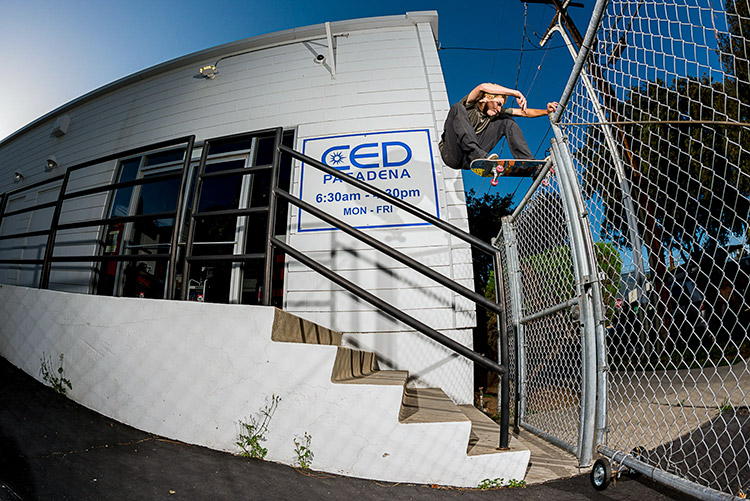 I’d say the worst part is tape glitches, but besides that it’s perfect! What skate videos or filmmakers inspired you growing up?
I grew up way out in the woods in a small town called Machias, Washington. YouTube didn’t really come about until I was a senior in high school, so getting any knowledge from skate videos and magazines was very slim for me at first. Luckily my friend and neighbor Jordan had Yeah Right! and I got a copy of Menikmati, so definitely Ty, Spike, and French Fred had a big influence on me. Then getting older and getting my license and leaving the woods I got to learn more and see more and there’s nothing like Jason Hernandez’s filming and editing, that’s for sure. 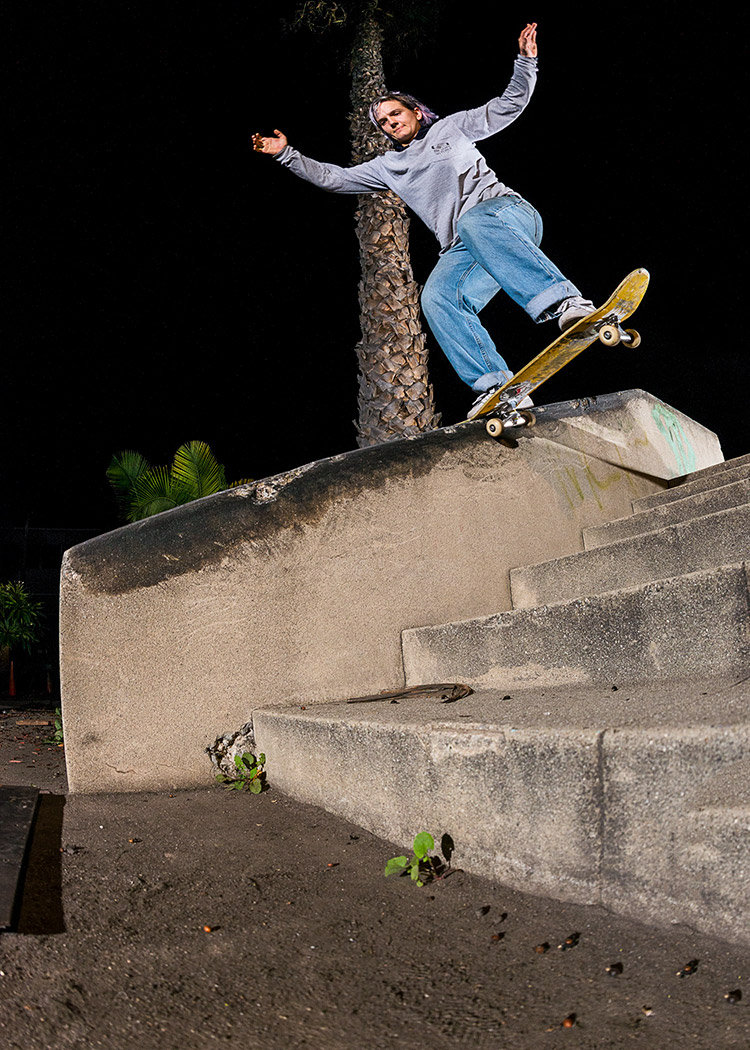 Kristin Ebeling keeps her toes on the nose

I’d say Ty and Jason definitely paved the way for the modern skate video, not only with their filming and editing but their work ethic in general. Similar to those guys you’re no stranger to fixing up spots. I think you have just about every tool I can think of in the van. What’s one of your favorite spots you made skateable for the video?
One spot that somehow ended up working out was this wooden hubba out in the canyons of Malibu at some park. I hadn’t been to that thing in years but we went back out there to check it for Brett Sube to get a clip. When we showed up the whole building was burnt to a crisp from the wildfires a while back. There was practically nothing left to work with. The entire building was burnt down but about half the hubba was still standing. We busted out all the tools and I had a seven-foot strip of recyclable plastic in the van and managed to build it somewhat back together piece by piece. Brett tested it out and it was a go. I’m still surprised it held up. 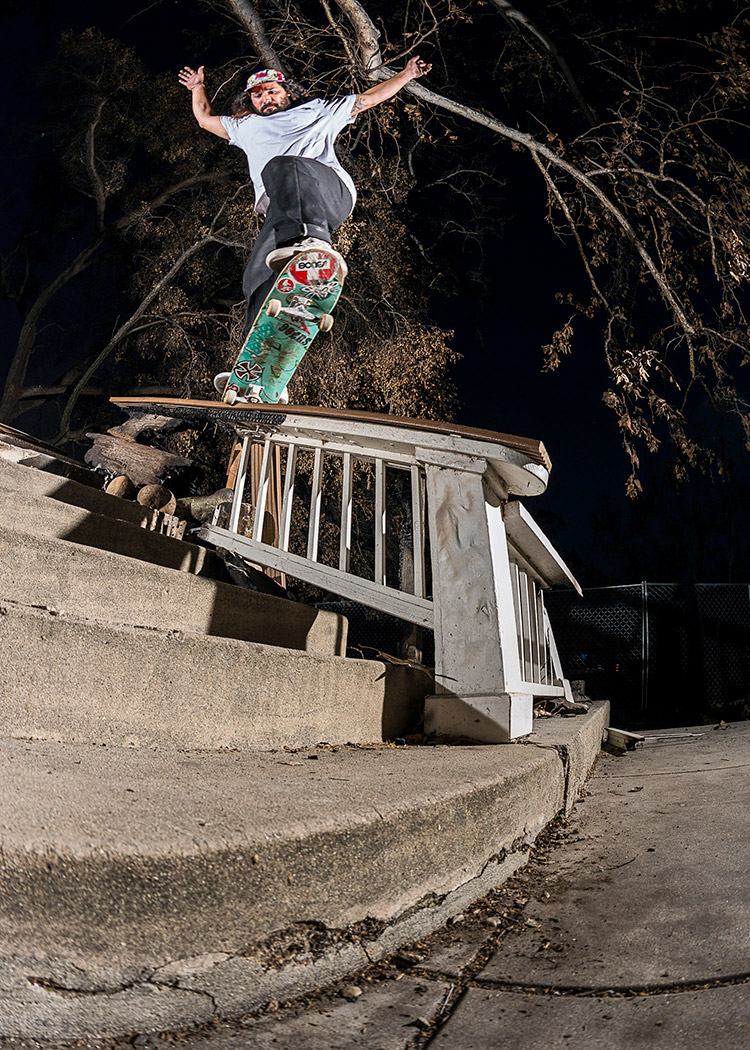 I can’t believe we salvaged that thing! Not only do you have lots of tools, but I also noticed you have a “Manual Swear Jar” in the van. What’s that all about?
That thing helps pay for gas! That all started from the @pumpermemes account on instagram. Every filmer and photographer knows the battles that the manual tricks will create and making fun of manuals is just too easy. Towards the end of the video it was hammer time so if anyone threw out the “M” word you had to put some money in the jar. No more manuals! It’s banger season! Unless you are Sebo—he can seriously combine the two and you will see that in the video. 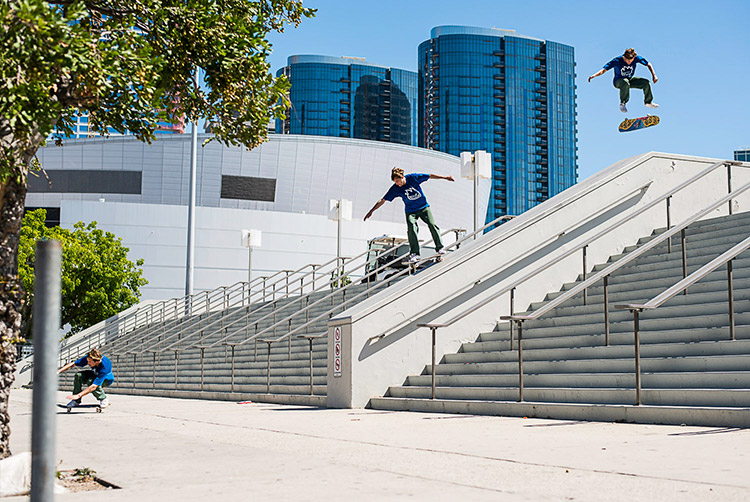 Nollie flip manual. That’s a dollar in the jar, Sebo!

During the filming process you took multiple trips back home to Washington. What are the advantages of filming there versus filming in Southern California? Do you have a preference?
It’s always nice to get a mix of the two. Washington spots are always very scenic and there’s a lot of spots that not too many people have skated unlike Southern California. But Cali makes it so much easier to film with perfect weather 24/7 and if you look hard enough you can find a new spot practically everywhere. Getting a clip in WA feels like it has more credability to it with the incredibly rough ground and the nasty weather. It takes a little more effort and skill to get clips in WA, very different from the perfect ground here in LA. 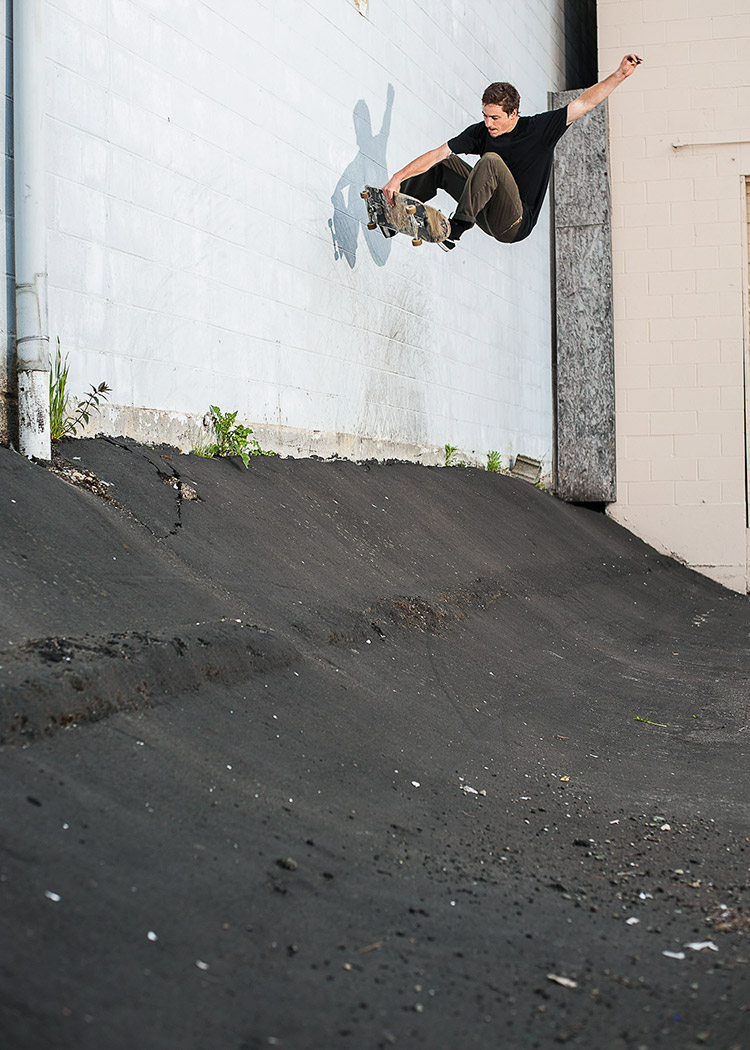 Cory has no problem with the crust of WA. Wallride yank into the blacktop wave

Earlier you mentioned Cory’s accident. The message boards love to speculate, but I feel like nobody knows exactly what’s going on with him. I know you’ve visited him multiple times. How is he doing and when can we expect him out?
Cory is one of my closet friends and always will be. People love to judge and make assumptions. If only we lived in a culture where people showed more compassion and understanding and asked questions. Cory is doing good, though. He has one of the strongest minds I’ve ever known. He’s still smiling, still laughing and finding the positives in the negatives. He’s gonna come out of this shredding harder than ever. He recently got transferred to a more mellow prison. Hopefully by spring of next year he will be out on work release—fingers crossed. The prison system is incredibly broken, so we’ll see. 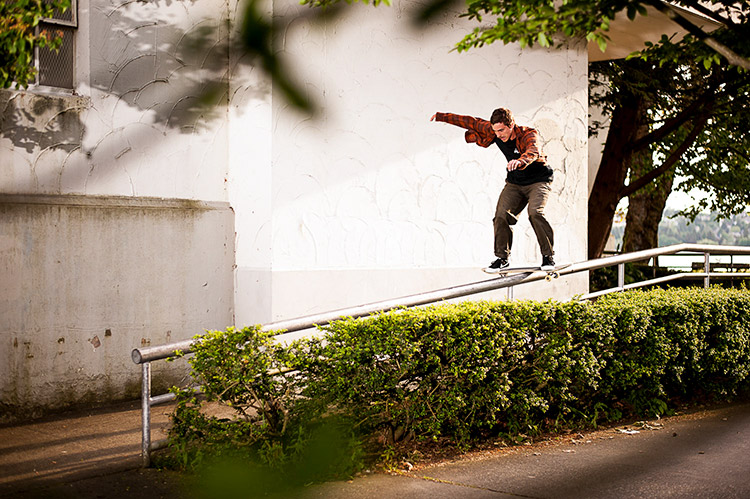 I think everyone is looking forward to that. For all the fans out there, what’s the best way to reach out to him?
You can send Cory some love by using this address:
Cory Kennedy
410614
Olympic
PO Box 37
Littlerock, WA 98556-0037
You can also download the JPay app for free and send him some love via email through the app. 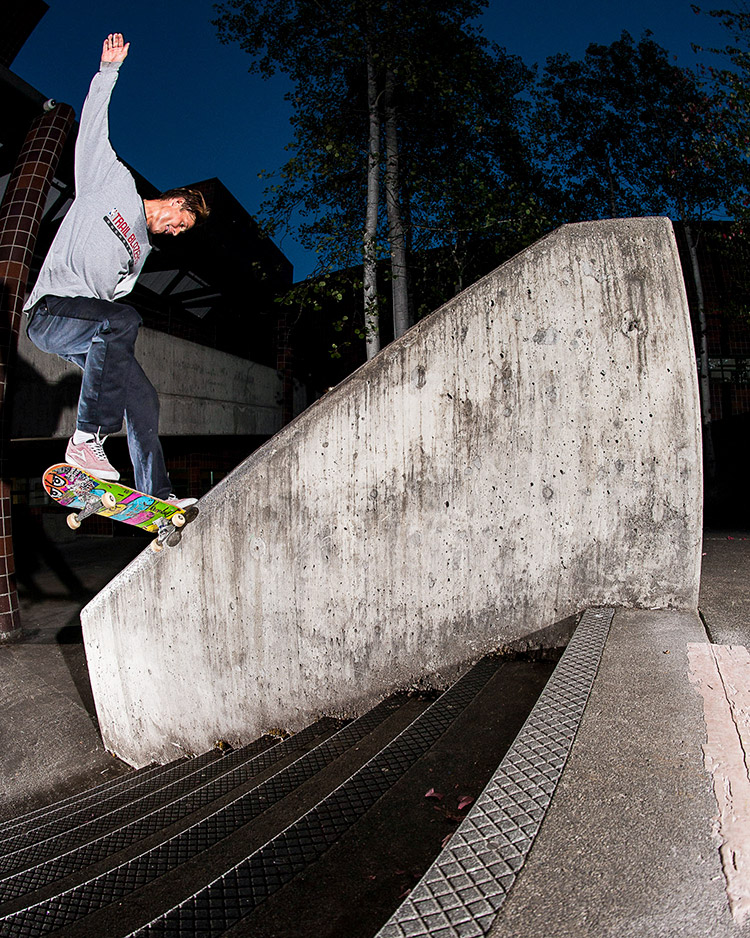 What’s the hardest part about putting out a full length in 2019?
I would say one of the hardest things would have to be trying to break even. I’ve poured all of my money into this video. I’ve worked three jobs while running SK8RATS and filming for this video. The hustle is real. I’ve easily spent thousands of dollars in gas, plus van maintenance and breakdowns, injuries, camera repairs, the list goes on. You would hope with so much time and money put into a product for a profitable return, but in this day and age with social media and people expecting everything for free, making a full length is a very sketchy move. So anyone out there reading this, buy a DVD and help us stay afloat! Hopefully I won’t die from eating too much Top Ramen. 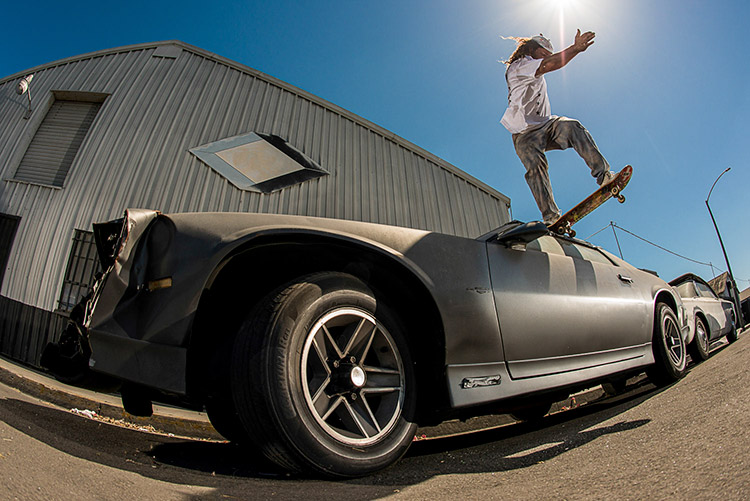 Ollie up, wallie the windshield and back tail the roof, Brett understands the vibe of skating cars

Never enough top ramen. Where can people purchase the video?
DVDs and other gear are for sale on our website, SK8RATS.COM/STORE and we’ll be getting DVDs into local skateshops as well. 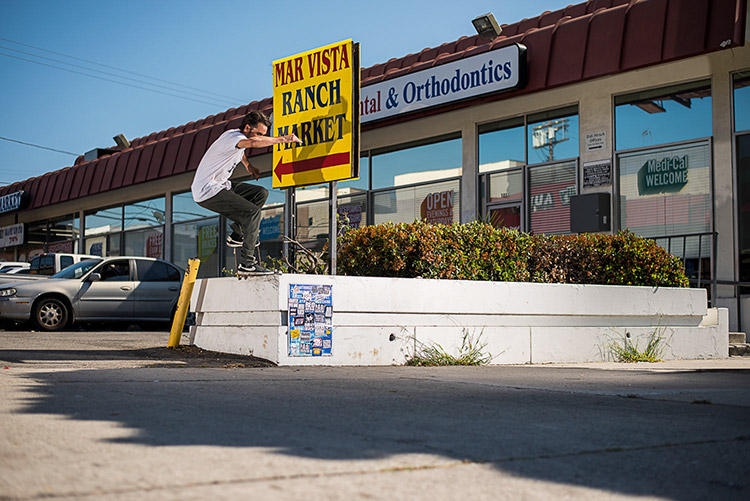 If you smack your mouth on the sign, at least the dentist is nearby. Chris Black, pole jam to nosegrind

What’s next for SK8RATS?
I’ll probably take a break from saving footy for another video and get back to focusing on more SK8RATS Gear. We haven’t been making much product lately, just been really focusing on finishing the video. It’s pretty much just me over here running the whole show, so kinda gotta keep it one thing at a time so I don’t lose my mind. So keep your eyes out for more SK8RATS gear popping up on the online store soon! Also be on the look out for our Roof Rats edit hopefully coming sooner rather than later.

Hell yeah, thanks for the insight, Shane! Any last words?
Never stop pumping! 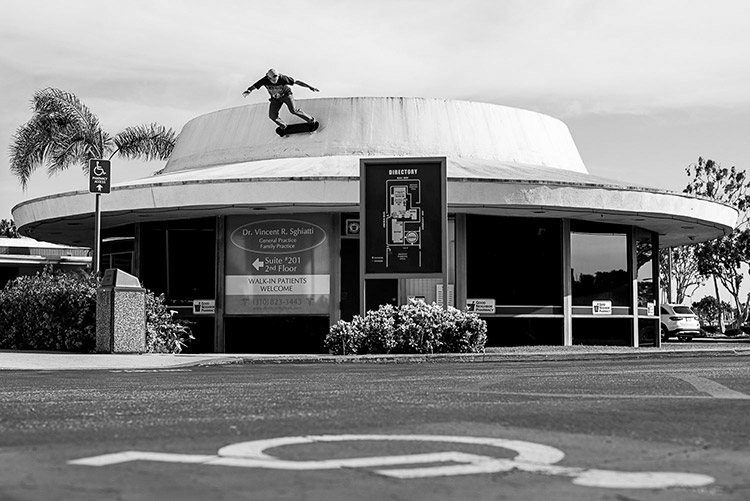 Save it for Roof Rats! Brian Baca, wallride to drop. Pump on that