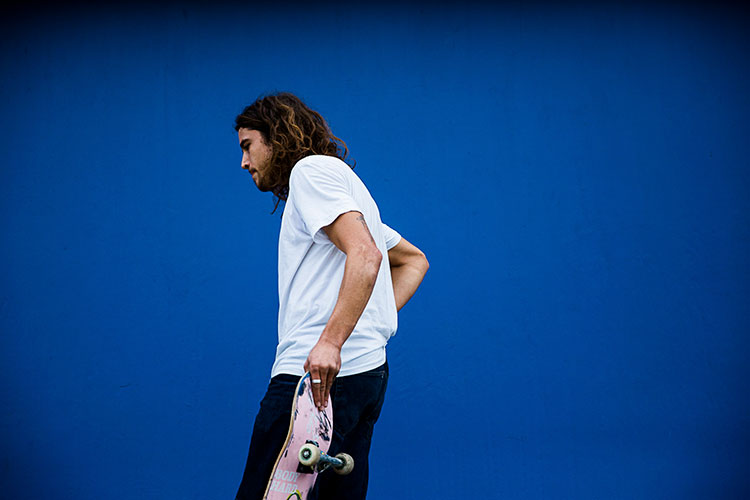 Words and Photos by Justin Ching
 
I met Yaje in San Jose right before he disappeared to Brazil to avoid knee surgery and reassess skateboarding. A couple years later our paths crossed again through friends and traveling, and it’s been great to watch him progress as a skateboarder and an artist. I caught up with him to talk about his most recent video part, Brick, and to see what drives his mosh-pit mentality.

Yaje, what have you been up to? How was that NY winter?
I’m finally learning to love winter. Being a warm-blooded Brazilian, I always need sun, but I have grown to appreciate the seasons. It’s what makes New York City Hardbody. It’s tough to be out skating in the freezing cold knowing that everyone else is hiding, but you have the city to yourself.
  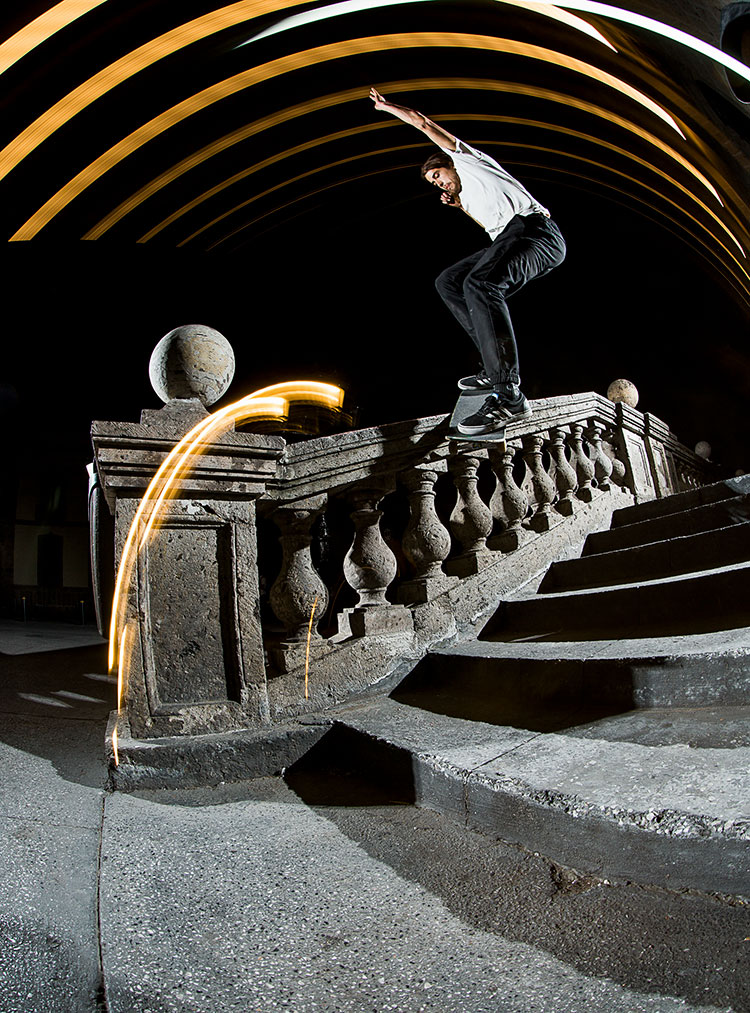 Cold-blooded Smith grind pop out by the warm-blooded Brazilian

Yeah, skating in that cold weather is no joke! And nice reference there. So what is Hardbody?
Hardbody is our homie company based out of the Lower East Side of Manhattan. It’s inspired by New York City’s urban vernacular.

Always rad to put the word out for the homie brands! You’ve channeled some of your energy towards painting and photography. This must make the winter more entertaining, right?
Yeah, shooting photos in the snow is great. There is something poetic about East Coast in the winter. We get used to those cozy grey days. It's the best time to paint, undisturbed by the calling of day. It’s easier for me to get in the zone.

You’ve been shooting a lot more film on your trips, right? What inspired you to start shooting more?
I’ve been shooting film for a long time but never really did anything with the photos. I couldn't really afford to pay for film to get developed all the time so I stopped shooting for years. I had so many rolls that I only recently got developed. You guys shoot so many photos on these Alien trips, I guess I got re-inspired.
  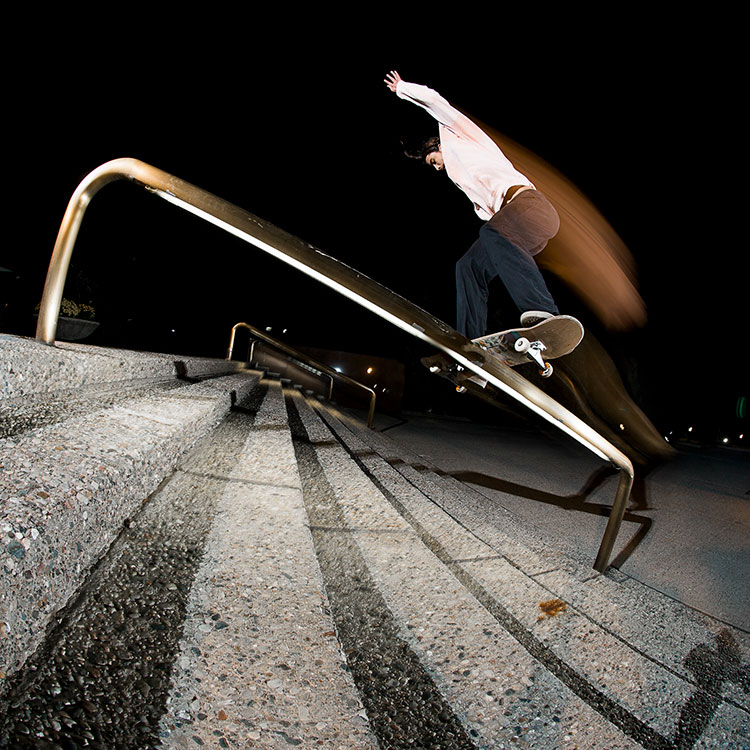 Film definitely burns a hole in your wallet, but it’s nice to have something outside of skateboarding that keeps one productive and creative.
It’s nice to have other loves and outlets. Skating was all I knew for so long that I guess you could say I’m finally enjoying life off the board. I see right through this whole "pro" status, but at least I finally have the validation for my family to leave me be. Skating shouldn’t be the only medium or else you’ll get burned out, like I did before moving to Brazil. Plus, I feel like I get better at skating from afar when I progress in other areas of my life and gain perspective. That’s when I feel even more in tune when I return to my board.

You’ve moved away from the avocado craze and designed that Brazil Abduct board with Mike Hill. What’s the story on that one?
I didn't really design it. One morning at my house on a New York filming trip, Chris Thiessen was flipping through one of my mom’s esoteric magazines and found that little cartoon of a UFO abducting the tropics. We thought it would work perfect as an Alien graphic so we sent a photo over to Mike Hill and he mocked up that cool design in minutes. That process has been my favorite part about going pro.
  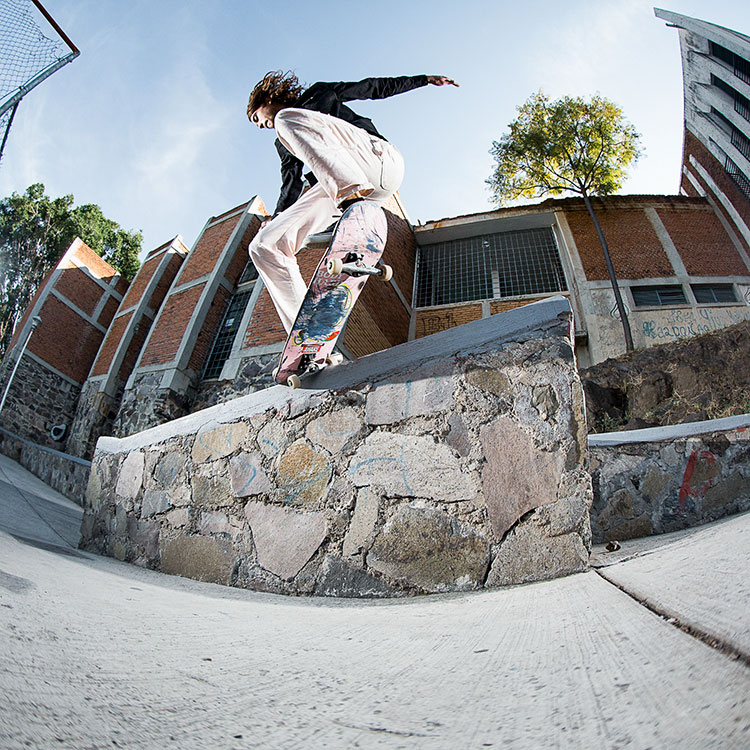 So how have your travels been this past year?
I had a girlfriend all of last year that made it really hard to travel, but it’s been a blessing to visit all these beautiful countries. It’s pretty much easier to skate anywhere other than America.

Spain was amazing. You and all the crew got some good stuff. What was your favorite part about that trip?
Skatopia or what?! Barcelona was made for street skating. My favorite part was stumbling upon the endless skate spots. There is so much to skate in Spain, absolutely no shortage of spots. But its kind of a curse because we end up walking by some of the best spots in the world only looking for more. Id like to live there for a bit.
  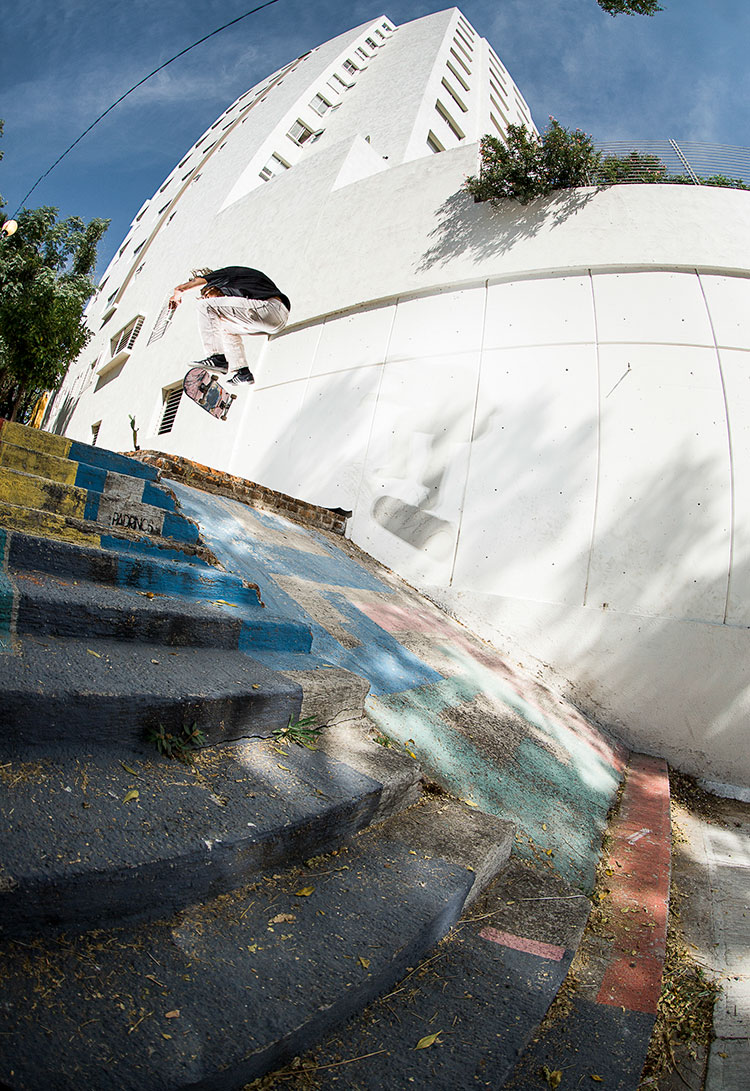 Barcelona on the brain, switch backside flip on the feet

Living there would be the perfect way to experience everything. You should do it! So how has your knee been?
It's pretty much constant maintenance. It keeps me in check, but my love for skating is stronger than the pain. I have always skated through it; it has helped me become aware of my body.

Coming from your time back in Brazil, what’s your typical regimen for keeping your body healthy and strong?
My health secret is hot baths, but I’m always stretching. Healing is a lifestyle by now. I don’t have to try to eat healthy foods. I struggle with regimen but my body craves exercise. Circulation is key. 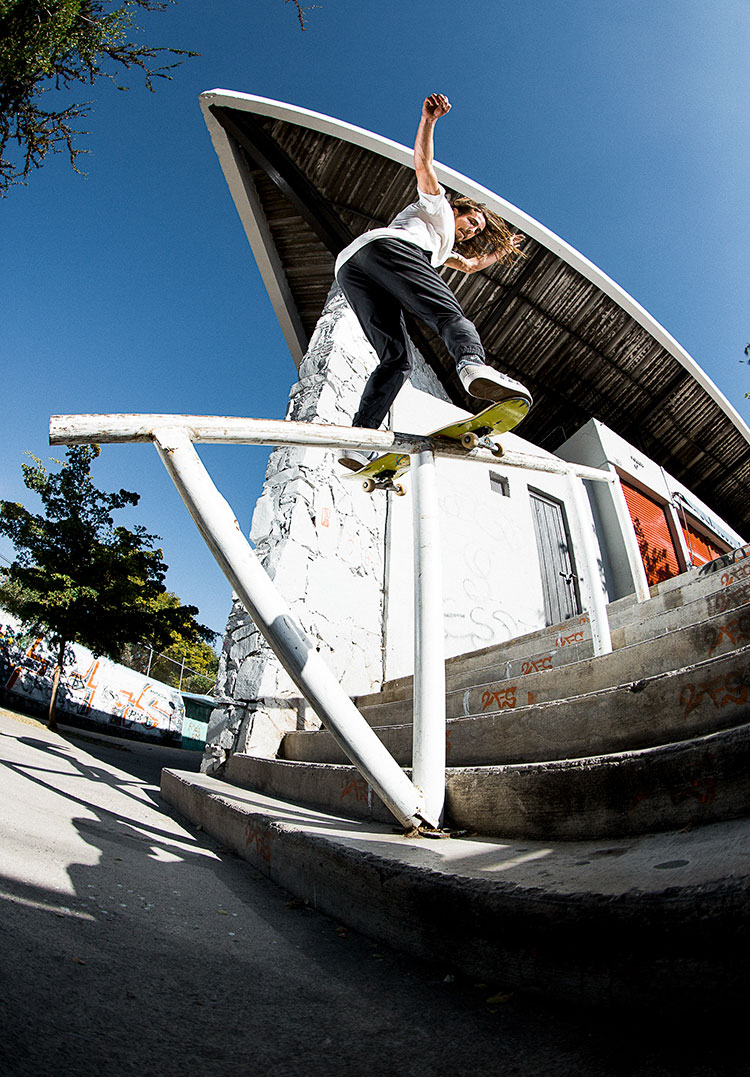 Yaje says this healthy fakie front board was a struggle too

You take some crazy slams sometimes. How do you deal with that? I remember you saying that sometimes you just need to slam so you can get motivated.
Skateboarding is so mental that sometimes all you need is to slam in order to rid yourself of that shakiness. I've embraced it as method. You become almost masochistic in order to reach that state of fearlessness you need to get your trick. It feels like a mosh pit when you are rolling around on the floor fighting a trick, which is kind of the energy I want to portray in this video part. Coming from a semi-broken home, there was always a lot of drama. Brazilians are known to be very loud. It could have very well sounded like this song in the household. So with this hardcore track I’m recalling my main inspiration, what got me skating in the first place. This intensity, this frustration and escape of society, childhood, family, school, work, to be able to say fuck everything; I’m going skating, is what has kept me going. The spirit of skateboarding is punk rock. The movements resemble that attitude. They may appear loud or disturbing but there is greater meaning to it all—that of protest and the fight for freedom.
  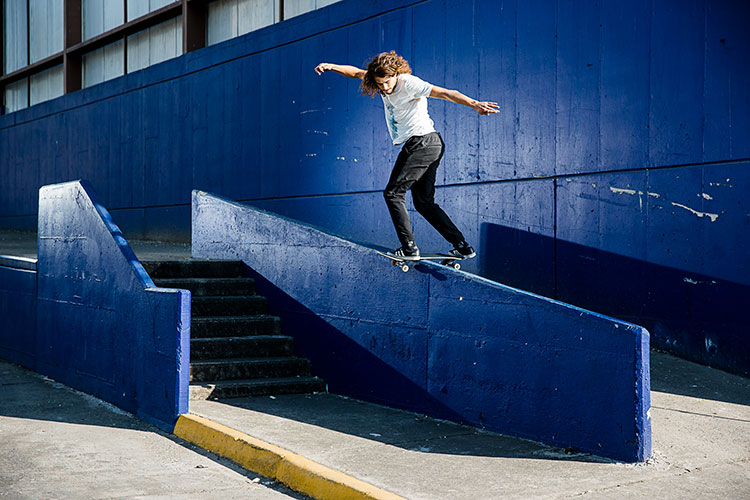 Egoless back lip in Guadalajara

That back lip bail in Guadalajara was one of those heart-skipping moments for us to watch. What went through your mind?
Everything rises to the surface when you are trying a scary trick. You are suddenly faced with your mind, which is why I think skating is such a meditation. There is so much focus and repetition involved. I try tricks for so long that by the time I roll away I don't even want it anymore, but it's as soon as I let go that I can have it. You try tricks until eventually the mind turns off and you lose all expectation—until skateboarding humbles you enough to be here now, rather than having any preconceptions before rolling up. I feel like I have to be egoless in order to perform.
   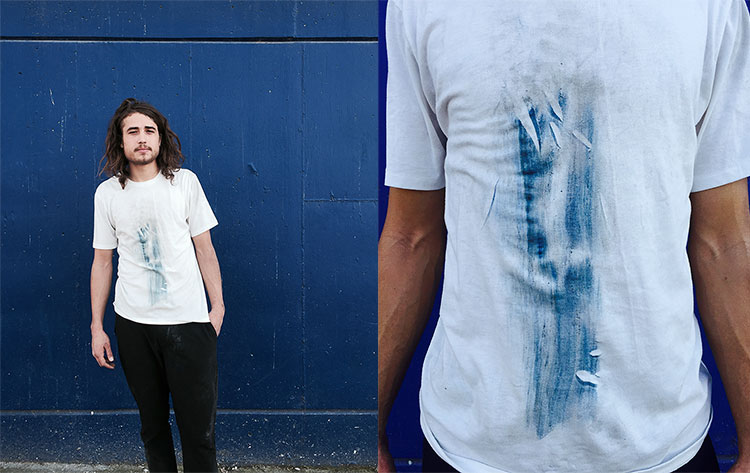 So how did this part come to be?
I had a great time working with Chris Thiessen on the last video project, so we decided to keep the momentum and stay filming together. We had a bunch of leftover footage that I didn't want go to waste so we decided on a little Alien solo part. I wanted it to be short, fast and to end out of nowhere, kinda like what she did to me. Thanks to Thrasher for supporting a personal project. 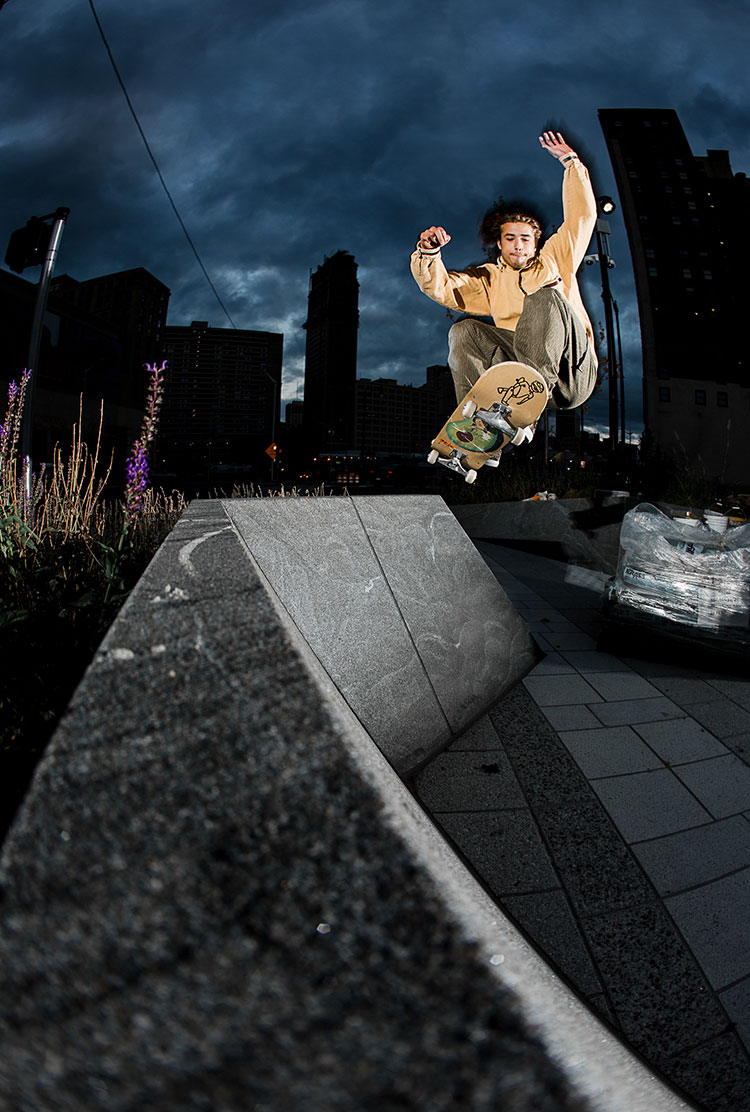 Before we wrap this up, do you have any traveling plans in the near future?
We all still love filming VX with Thiessen so I think there are already some Spain travels underway with the Alien ams, Max Garson and Darius King.