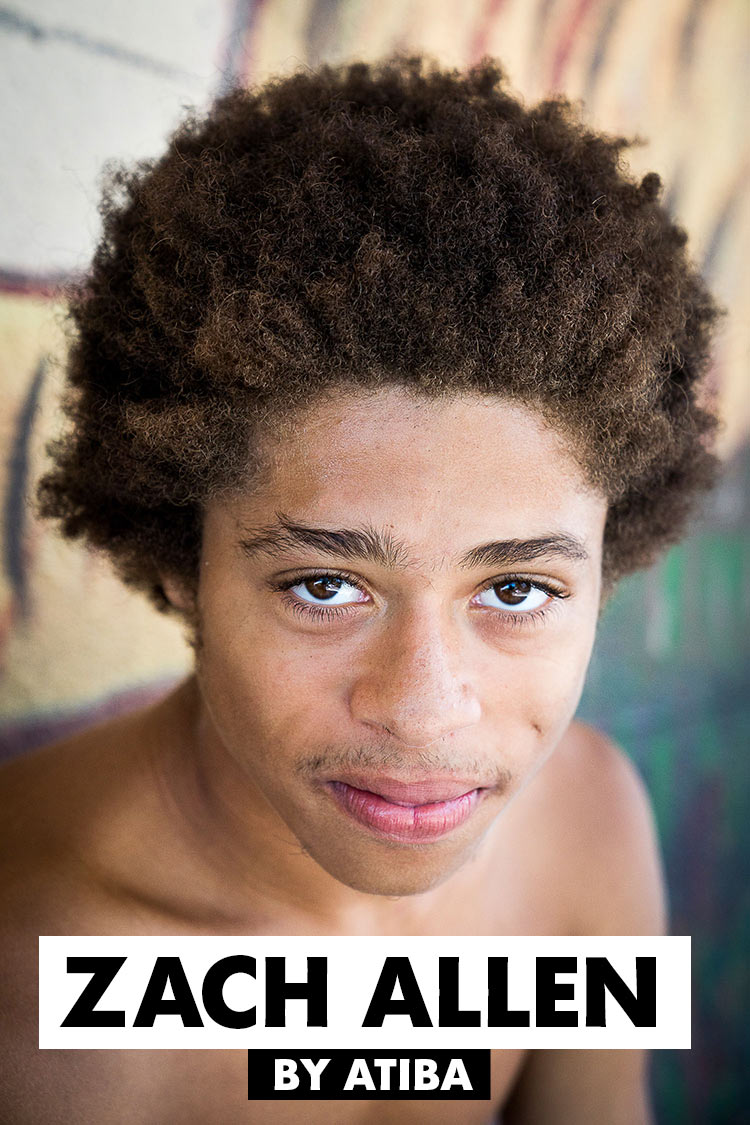 What you been up to?
Chillin, skating. I’m on a Baker trip right now.

What’s up with your phone?
It's fucking broken. I broke it skating. I gotta buy a new one.

How long has it been?
A month, maybe a month and a half.

Holy smokes; that’s a while.
Yeah, I got a burner that works on WiFi only.

Where are you from?
Panoramo City. It’s in the Valley. 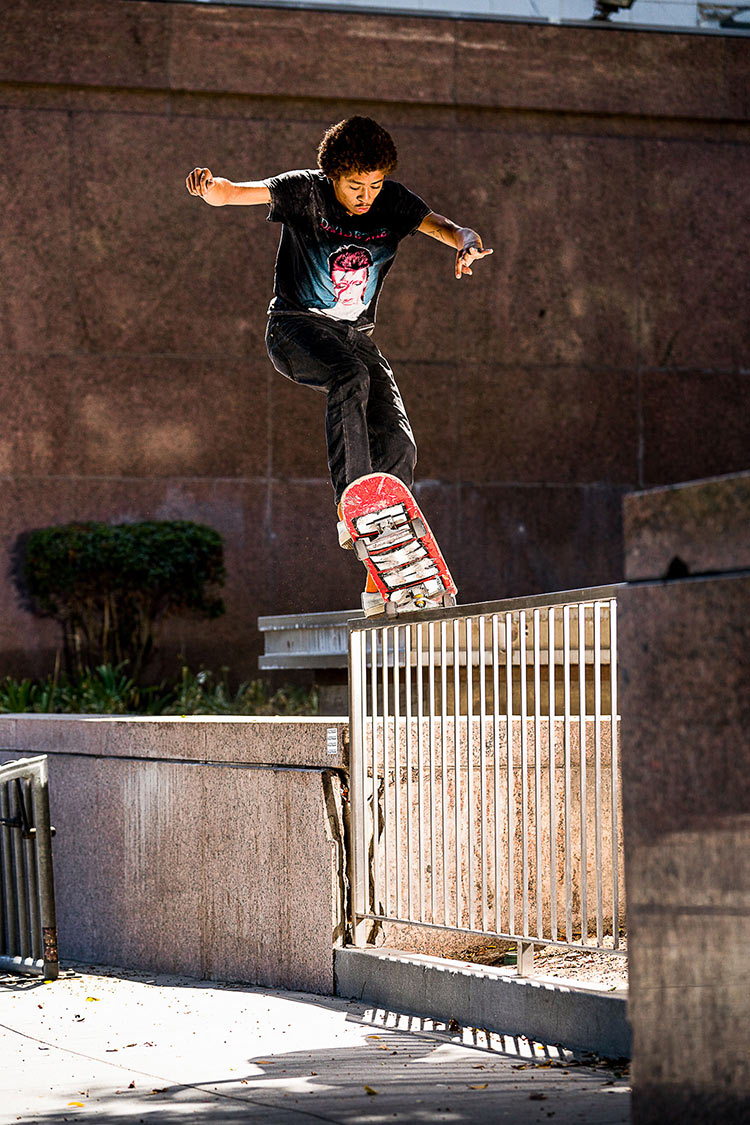 This is Major Tom to Ground Control, I'm floating in a most peculiar way, and the 5-0 180s out look very beautiful today     Photo: Atiba

How long you been skating for?
Since I was six and I’m 18 now.

How’d you get into it?
My mom got me a board because I didn’t know how to ride bikes with training wheels, so I got a board instead.

Did you ever learn how to ride a bike?
Yeah, but skateboarding is way easier.

How did you get on Emerica?
Through Andrew. I was riding for Lakai before and then I got on Baker and Andrew wanted to see if I wanted to ride for Emerica.

Is this your first video part? Your first real one, would you say?
Yeah, real as in more than a minute.

How do you feel about that?
I’m stoked.

Is there pressure to come through?
Kinda. But I was just kind of having fun a lot of the time.

What was your filming process for this video?
I was filming with Bucky Gonzalez and a filmer named Felix Soto that films for Baker. We had another project we were gonna do but we ended up giving it all to Emerica for the video.

What was the project you and Felix were working on?
We were just gonna try to get a little Thrasher part but instead we gave all of the footage to Emerica.

What trick gave you the most trouble?
Two weekends ago we skated this gap at a school in Valencia and I tried to back heel a gap.

Did you get it?
Yeah, but it didn’t even make it into the video part. It was an uphill gap so it just made it hard. 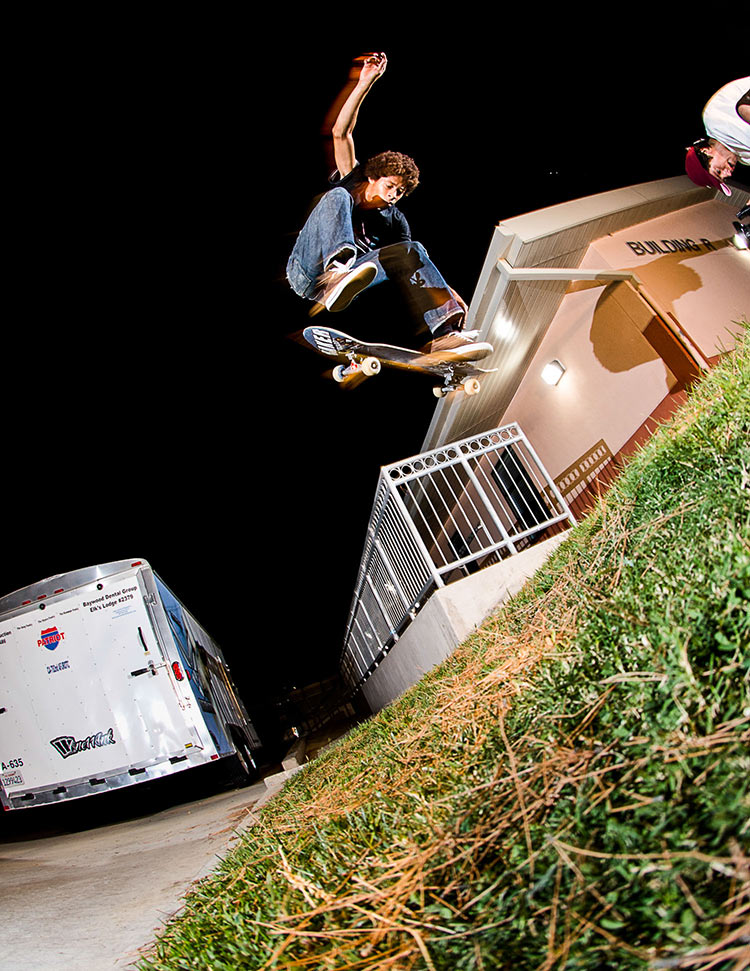 Uphill back heel for the love, not the video     Photo: Hammeke

What about the one foot.
That was, like, five minutes.

Super easy.
It wasn’t that easy. It was just like jumping off a building so you want to get it quick. 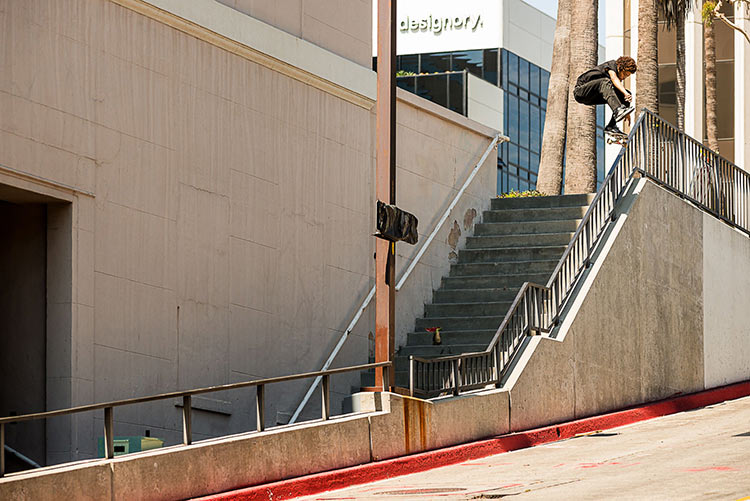 One foot? Nah, gotta be at least ten-to-twelve. Jump off a building, indeed!     Photo: Seidler

Did you travel for this video much?
A few trips. We went to the Pacific Northwest, like, Seattle and Portland and then we went to Arizona and SD a little. And to SF, like, The Bay with Felix and stuff

Who’s your roommate on these trips?
Victor and the little guys like Kader and Patrick and Seven. Those flow dudes.

You like that it’s a lot of your friends?
Yeah. The whole am team, we all know each other.

So you feel like you’re just hanging with your homies?
Yeah, I’m comfortable. 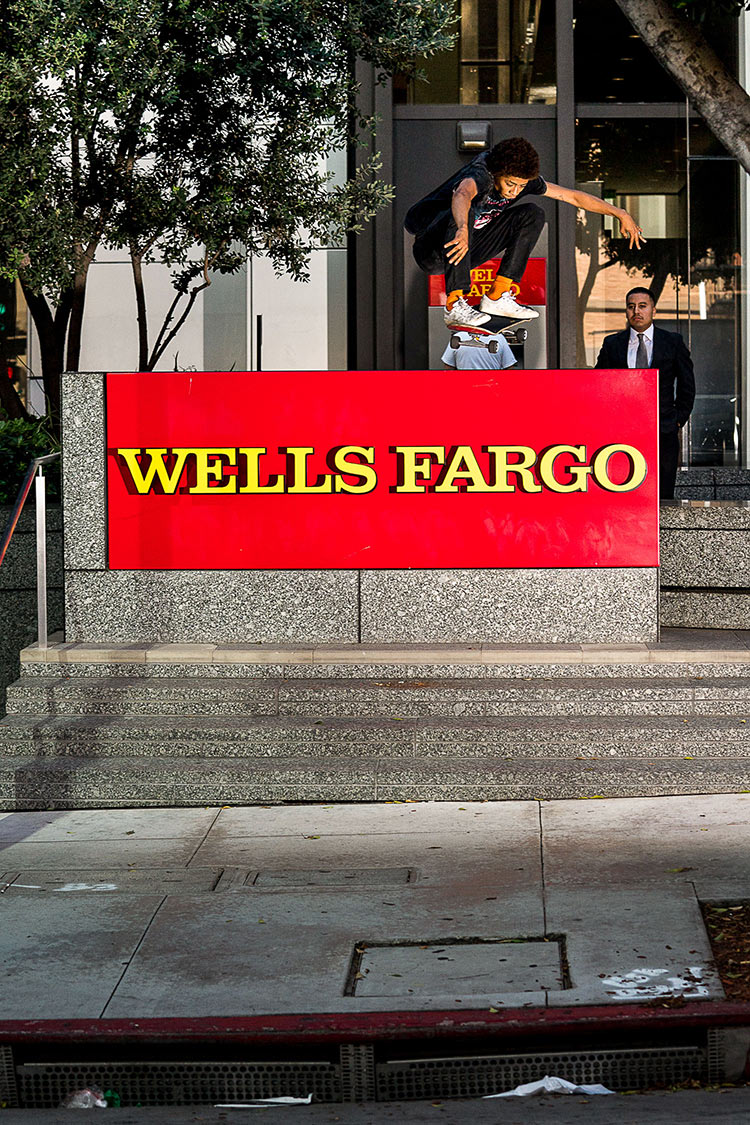 Security lurks while Zach works—ollie for the Fargos     Photo: Atiba

What was your favorite trip?
Probably all the SF stuff that’s in there. I like that the most.

Just 'cause it’s SF?
And because that was the best trip I ever went on. There’s two SF trips that contribute to the part and both of those trips were the best trips, not only chilling-wise but skating-wise.

What was it like for Andrew to put you on the team?
It was amazing.

Did you look up to him?
Yeah, dude. Baker 3 was my first video ever.

So you were psyched?
Yeah, I was super psyched.

Is he one of your favorite skaters?
Yeah.

Channeling his inner Reynolds, Zach Cabs into a front board. Can't wait for Baker 4     Sequence: Hammeke

Whose part in the video are you most stoked to see?
Victor’s part. It’s insane.

Do you think he’ll have the last part?
Oh yeah, for sure.

But you guys haven’t seen the video, right?
We’ve seen some little parts of it. We’ve seen rough edits. Bucky will show it to us to hype us up to do a trick that we don’t want to do.

So seeing that stuff motivates you.
Yeah, especially for Kader. Kader’s the most stoked to do everything.

Yeah his part’ll be good. I’ll bet you’ll see his progression in the part. How long have you known Victor?
I've known him since we were ten or 11, but I started becoming friends with him when we were like 12 or 13. 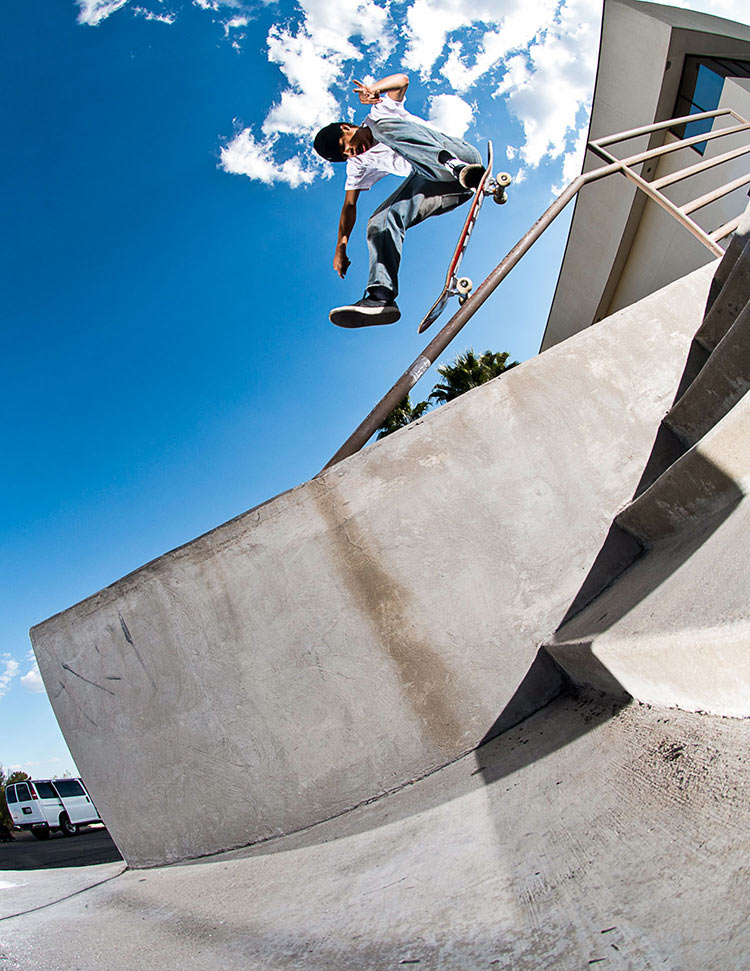 And how old are you now?
Eighteen.

Whoa, so you’ve know him for most of your life.
Yeah. We’ve known Kader for most of his life, too. He was eight or nine and used to go to Skate Lab and Pedlow a bunch.

Was he annoying?
Kind of, but he was the sickest one of the little kids.

Do you beat him in SKATE?
Yeah, but he beat me at Pedlow on the halfpipe.

What are you working on next?
The Baker 4 video but hopefully a Thrasher part, too. I’m gonna get a car soon so hopefully start driving to SF a bunch. 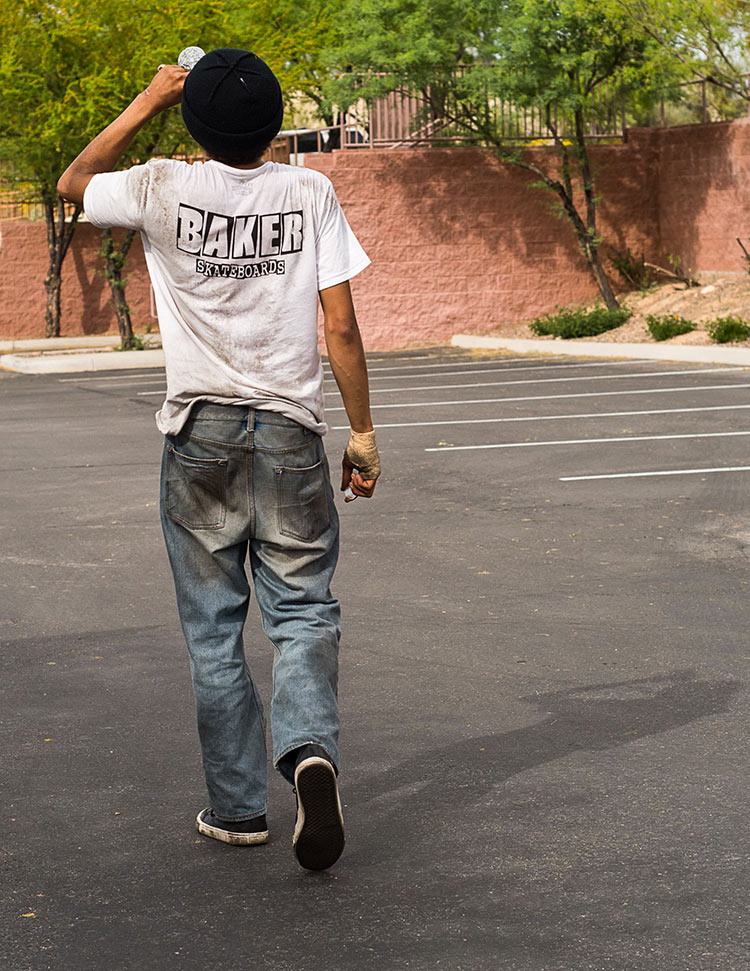