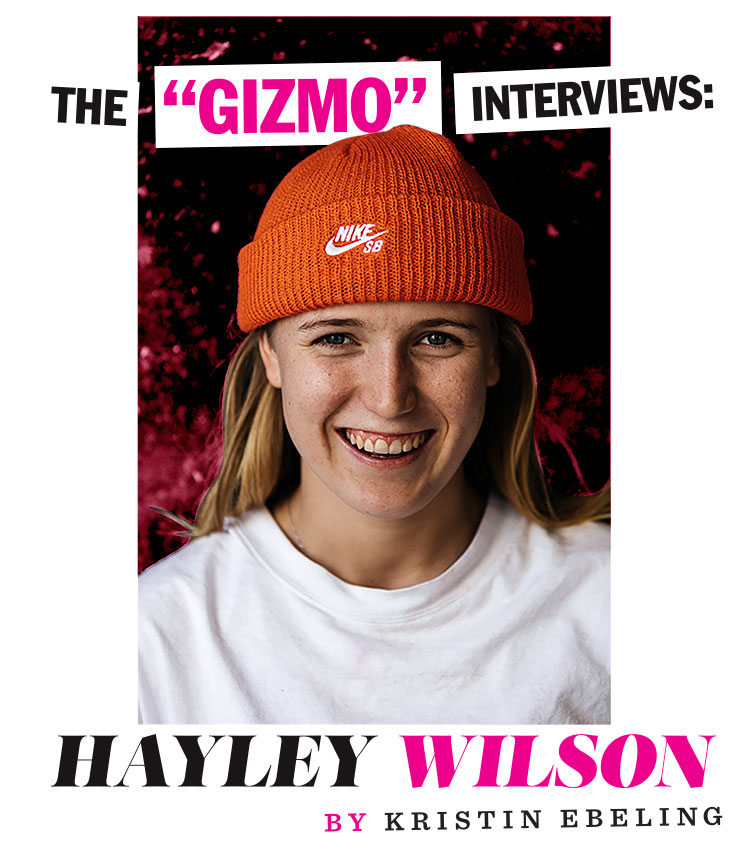 Hayley Wilson is part of a fresh crop of freakishly good and level-headed ladies of shred on the scene these days. Coming from the land Down Under, she’s recently finished high school and moved to Melbourne to pursue skateboarding full time, and her upcoming Gizmo part might just be the launching point she’s looking for.

So I heard you have a busted arm. What happened?
I was trying a noseslide on a bomber ledge for my video part and slipped out back onto my arm.

Wait, what’s a bomber ledge?
A ledge that goes straight out and drops off high.

What did you break?
My scaphoid bone in my wrist.

Oh, I had the same thing. It sucks so much!
It was so painful! It didn’t hurt that much at first, but after the surgery it was so bad.

So how much longer are you in the cast?
Only another week or so and then I get a molded wrist guard type of thing. You can take it off and have showers so that will be nice.

Have you been skating lately even with that broken wing?
I haven’t been filming, just rolling around trying to get back into it. 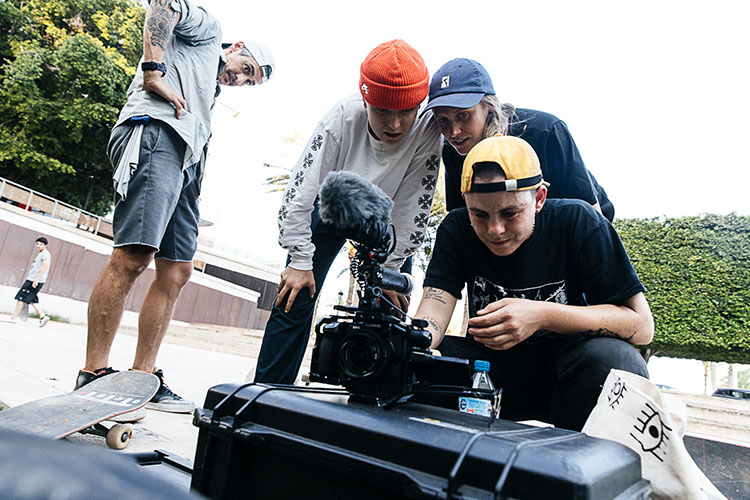 So where did you grow up skating? What got you into it?
I grew up in Mansfield, which is a small town two hours from Melbourne, the main city of Victoria. It has a really small skatepark, pretty crappy, nothing to it, just a few ramps, a ledge and a flatbar. That’s all I had so I had to make do. But then I would travel to contests and then I got to skate different parks. I moved to Melbourne last year to get a better experience with the city and to skate more.

Melbourne has such rad spots. Did you move there alone?
No, my brother and I live here. He’s a dancer. Outside of Melbourne I get to travel a lot so I get to experience different cities. When you see the spots in videos and then you’re there—it’s so cool to see the spots in person.

What was it like growing up skating with the all the dudes? Aussies have a rap for being harsh. Did you gain some thick skin as a result?
Where I grew up I only skated with the dudes for the first two-to-three years until they all grew up and moved away, so then I skated mostly on my own. But when I was first starting out they took me in as one of their own and were so humble and nice so I was never intimidated by dudes when I went skating. It’s the same when I moved to Melbourne—they were all so welcoming.

Was it a totally different vibe going from the Medley project with all the guys to an all-women’s squad for Gizmo?
Totally different vibes. Up until the first trip in Spain with the girls, I only knew what the guys’ van was like and being the only girl, too. I loved being with all the dudes, though—always good vibes. Being in the van with girls, it’s a lot more mellow and chilled out but I’m into that vibe. It’s nice to be with all the girls.

What was it like at the spots? Did everyone stick around and encourage each other to get their tricks?
Everyone is super encouraging when someone is trying a trick. We all usually stayed and hyped them up. 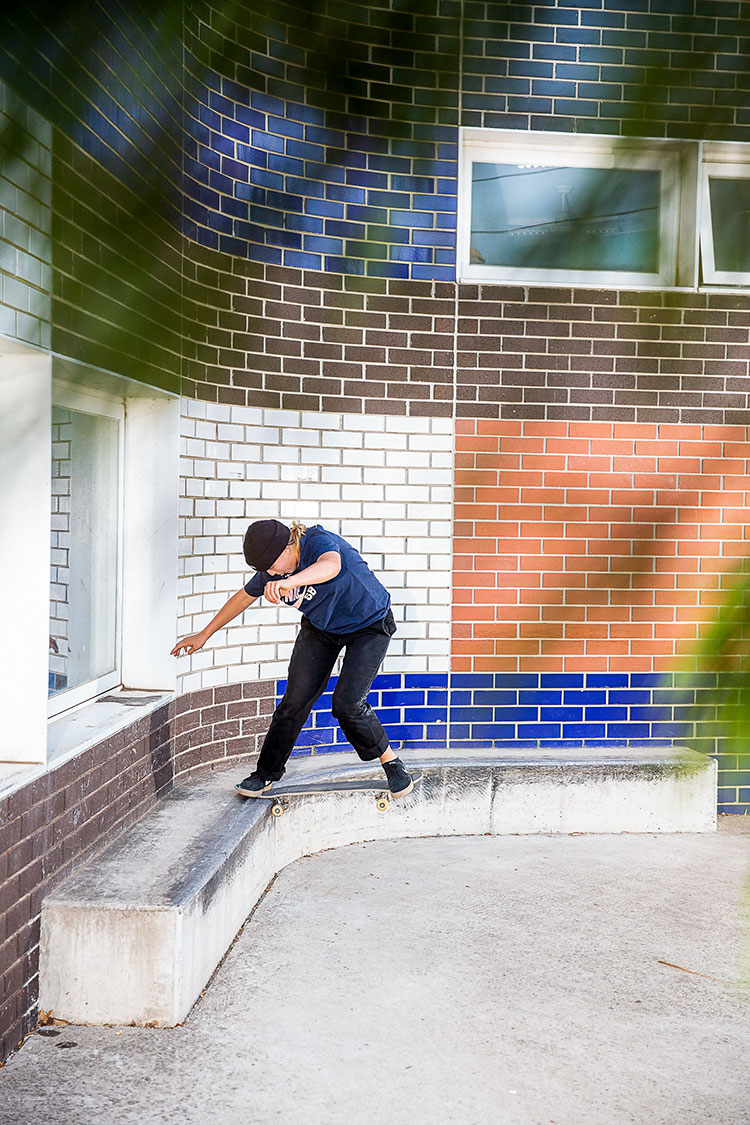 Front nose, through the corner pocket

What’s your favorite terrain to skate?
I like ledges and hubbas; they’re my two favorite things to skate. I’d love to be able to get into skating handrails.

With this video part you’re putting out, do you feel like you were able to find the right spots to get your best tricks in the short amount of time you had?
We started in June of last year. I’ve been able to find the spots in Melbourne that I’ve wanted to get tricks on because I have the time to look at different spots here. When I’m on a trip, I see a photo of a spot and I would try to think of a trick for it. If the trick doesn’t work, I try another one or just go to another spot.

You started filming in June. Is that right when you got on Nike? How did that all happen?
I got on Nike December, 2016. I was pretty late to the video. I didn’t know about it until about a week before I left for our trip to Spain. I’ve been on Nike Australia for just over two years now.

How did you get the offer to get a part in this project?
I got a phone call from Chris and he just said Nike wanted to take me to Spain. I didn’t expect a whole lot. I didn’t really know I was filming a part until maybe four months ago. I was kind of just filming anyways—a whatever-happens-happens type of thing.

How were the spots over there?
They were so good. There’s some really rough spots, like, really crusty ones. Then some ledge spots with perfect ground, perfect ledges. It was really cool. The dudes were there on that trip, too, including Stefan, which was really cool because I had never skated with any of them before. It was a super sick experience. 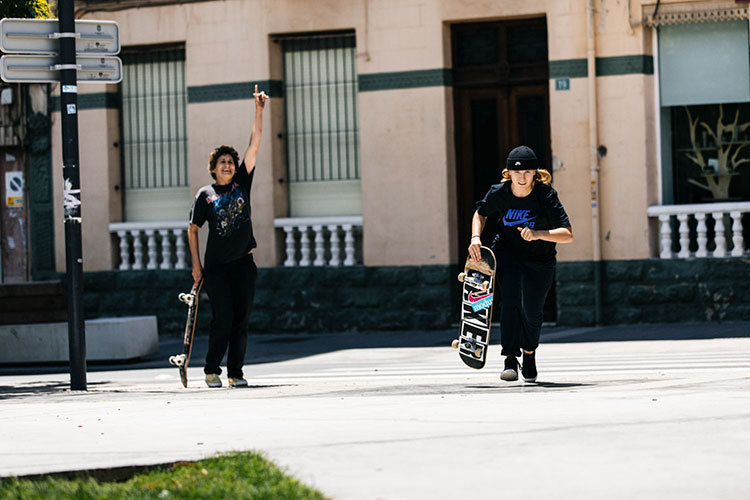 So jealous! I used to doodle him on the sides of my homework doing switch flips.
Such a good switch flip!

Dude, best in the game, from a dude. I mean, Alexis Sablone probably has the best of all time.
Oh yeah, her! Alexis’ is probably the best switch flip, now that I think of it.

What do you feel like your top influences are for your skating? What has given you your style?
I used to skate a lot of transition—vert and bowls as a kid. We had to travel hours to get to skate any of that stuff. I started watching skaters like Lacey and Leticia and that’s how I got into street skating. I used to be a park skater and then I kind of grew out of that.

Who’s your favorite skater?
Guy Mariano is probably my favorite—and Lacey Baker. The skater I’ve always admired and aspired to be like the most would have to be Guy, though, because he’s got a sick style and films some pretty insane tricks. I always watch his Pretty Sweet part before I go street skating to get hyped.

Who’s an Australian skater we should be on the lookout for?
There are many skaters here in Australia that are killing it, filming and coming out with some amazing stuff. I’m sure you guys know who he is, but Jack O’Grady—he’s on one at the moment. He recently won Australian SOTY; he’s always being productive with filming and shooting photos, getting covers on many of the Australian magazines. He’s come out with some insane shit in the past few years and that’s just the beginning.

What are your top-three tips for twirling out of a noseslide?
When I do them, as I’m getting into the noseslide or am locked in, my body is already rotated or starting to rotate so when you get to the end of the ledge you can just twist out. 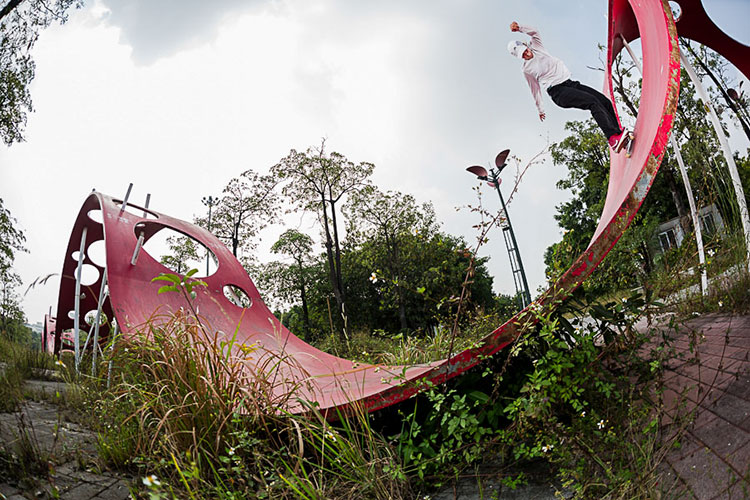 So this Nike video is a big deal. It’s pretty cool to see all these amazing skaters in one video. Is this your first full-length video part?
I had footage in Medley last year, but that was kind of just a minute or so. I was so hyped on that—being in the Nike video with all the dudes. And now that there’s an all-women’s video it’s so cool to see everyone out skating together and getting to go on trips. To have a full-length part, it’s always been a dream, and to be with all my idols as well in the same video.

So, you’re a teenager. Are you the youngest person in this video?
Yeah, I think so. I’m 17. I think Aori Nishimura is a little bit older than me.

Are you still in high school?
I’m not in school any more. I’m just focusing on skating while I can because it’s an opportunity so I might as well take it. If I want to go to school later in a few years I can go back.

What’s it like going out with the whole crew, like Lacey, Elissa and Leticia? Did you jive with everyone?
When I first got to Spain, I was a little bit intimidated. I’d skated with them before, but never been on a trip with them. After a few days, they kind of take you in. It’s really cool to be able to hang out and gel with them.

What kind of music was bumping in the van?
There was some Gaga, some Whitney Houston.

Blink 182 maybe?
Hit it with the Blink! Lacey loves that!

A real Blinkhead, indeed. So aside from this whole video part, what other skate stuff is up next for you?
A lot of contests like Street League in London, LA and New Mexico, so probably focusing on those. There’s little ones in Australia, too, that are happening. And then the Olympics next year, which will be a cool experience. It’ll be fun to see how it all turns out. Skating has never been in the Olympics so no one really know what the deal is or what will happen after. I hope skating will blow up after it, but I guess we’ll see what happens!

Are you on the Australian Olympic team?
Well, they haven’t announced it yet, like they’ve done in the US. There will be qualifiers. Nothing has been released, but it’s coming up really quick. There will be contests in Australia where you can qualify and then that will send people to Street League and it will be based off of ranking.

Would you be psyched to be a part of it?
Yeah, of course! 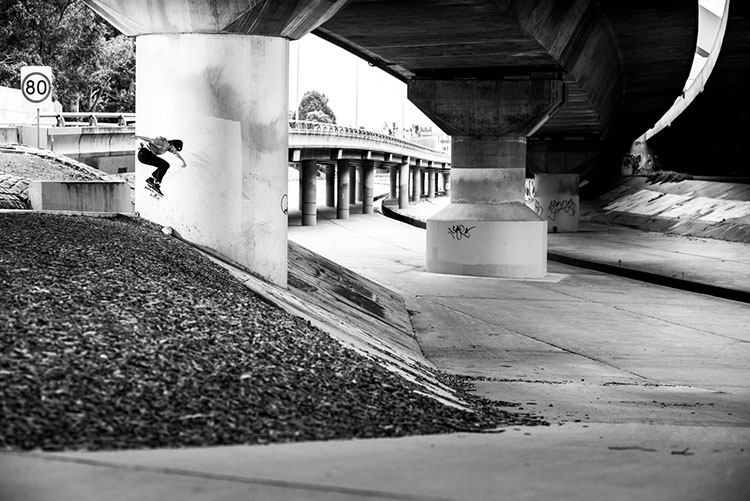 Half Cab into the bank. Can’t wait to see that Thrasher part, Hayley!     Photo: Golder

It kind of seems like you came up at a really good time in skating. There’s such a huge scene of women skating, at least that’s what it feels like where I’m at. Is it like that in Australia? Do you go to the park and see lots of women?
Yeah, there’s a girls’ scene in Melbourne at the moment, which is amazing. When I grew up I didn’t have any girls around until I started doing contests. These days, there’s always at least one or two girls at the park, having a roll.

Has it been hard to balance the street skating with the contests? It’s gnarly out there in the streets, but with contest you probably have to work out a lot to stay in shape with how hard skating is on the knees and ankles.
It was hard at first. Last year was so hard. I had just moved to Melbourne and trying to balance the gym and contests—and I had just started filming for the Medley video, learning how to do that. Now I’ve figured it out a little bit, but it’s still hard to know when to stop filming to get ready for a contest. That’s the hard part.

What are your hopes for the future?
Contest-wise, make it to the finals of Street League. That would be a big accomplishment for me. After the Olympics, I want to start filming my own part, like Lacey did with Thrasher.

Well, dreams start by talking about them, right? So you know we’re getting it out there.
Exactly! 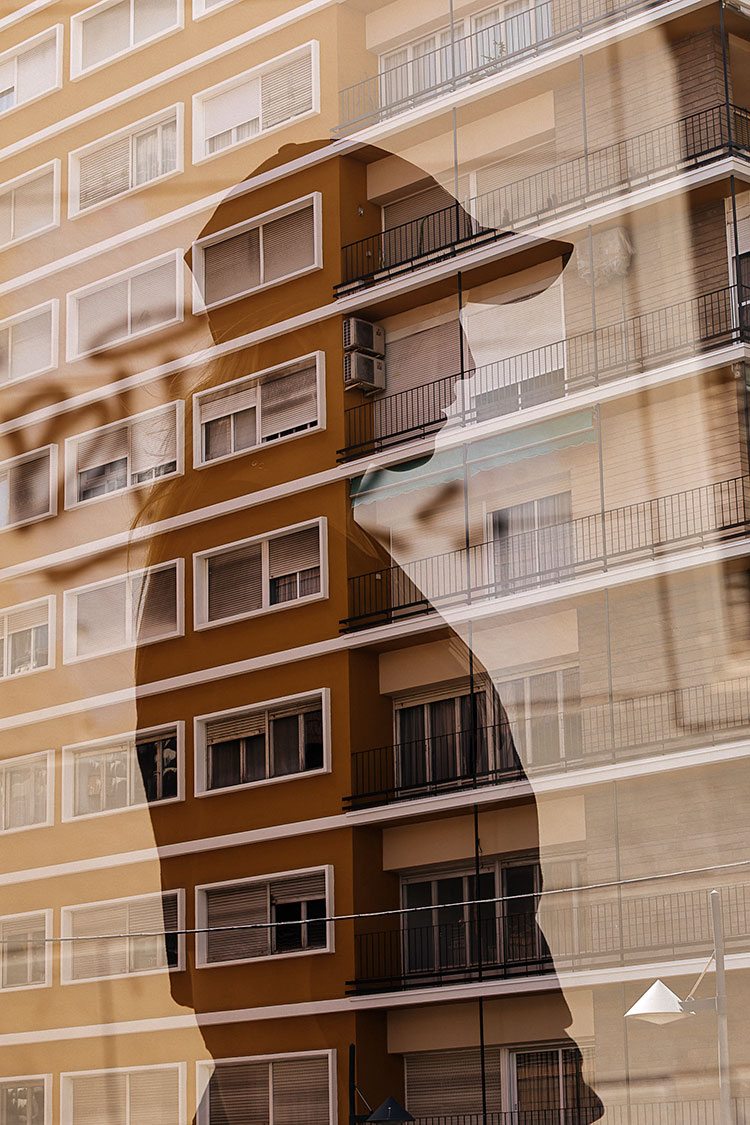