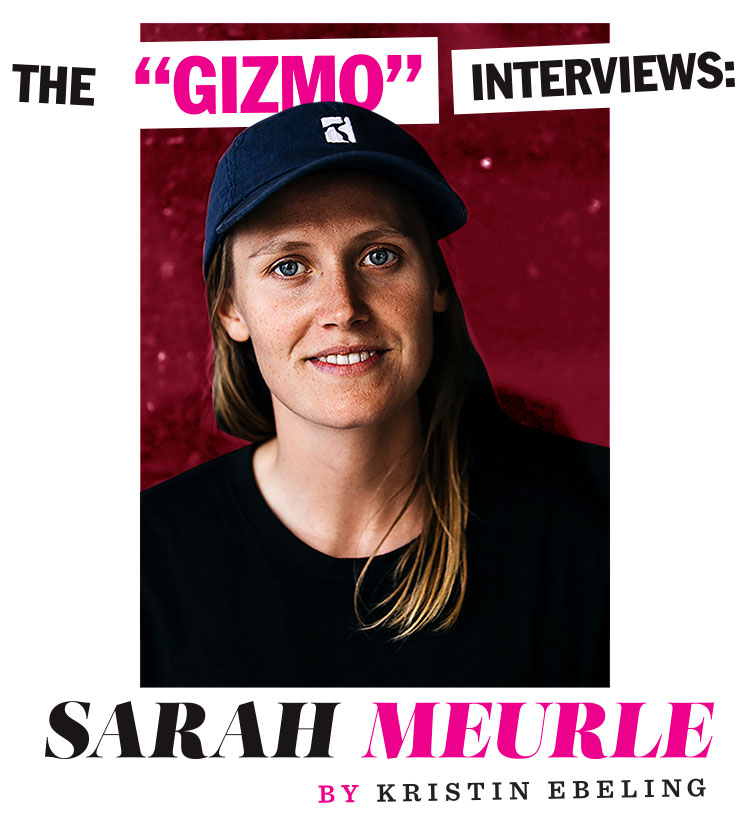 Sarah Meurle has been ripping for years, while simultaneously traveling, pursuing art and finishing a post-secondary education. She grew up skating the streets of Malmö and was part of the first graduating class of Bryggeriet, a skateboarding high school (which you might remember from Post Radical). This two-time European Skater of the Year isn’t new to skateboarding, but she has definitely been experiencing some well-earned shine lately.

What was it like growing up skating in Sweden?
The attic of my parents’ house, that’s where I skated a lot when I was 13 to 14. It was too far to walk to any of my friends’ houses—you had to drive and there was no asphalt close by. So I skated there a lot by myself. This little crew of us, we would go into Malmö on the weekends. It’s about a 45-minute drive. Our parents would drop us off at 11 AM and pick us up at 8 PM. That was super fun, and for me Malmö was a really big city because I’m from a small town. When I was 16, I started going to Bryggeriet, the skate high school. That opened up the same year I turned 16, so my class was the first. We were the trial students. Some things were super great already, but it was also super easy to get in. You didn’t need any grades, so there were lots of non-skate students going to the school that didn’t want to be in there. For me, it worked out great because I had a lot of freedom. I studied media and skateboarding was my passion. When I was 17 I was able to go to Barcelona. I used having an internship in photography there so I could go and skate for three weeks and my school was fine with it. I wouldn’t have been able to do that at any other high school.

Were you the only woman going to school there?
No, so my friend my Magnussen, I got to know her through a girls skate camp. I told her to move to Malmö from Gothenburg. She was one year older than me, so she re-did one year of high school to join my class. We hung out every day. And there were some more in the years younger than us. It’s been going in waves. 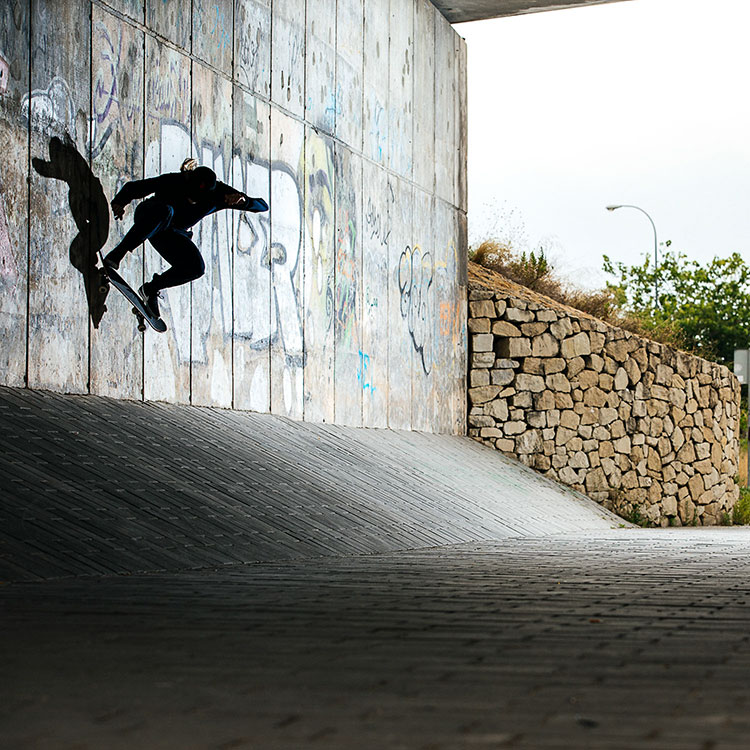 From the attic to the streets! Wallride nose press     Photo: McGuire

What kind of grade did you get in skateboarding class?
Ha! I got the good one, I think! They give grades based on your progress. It doesn’t matter how good you are, it’s just on your personal progress. So that’s good. It was rad. John, the main skate teacher, somehow incorporated skateboarding into different classes. We had nutrition and how to take care of yourself after injuries. We had skate history and we watched old skate videos. It’s pretty funny when I think back on it.

That’s pretty cool, though! So how was this Nike video similar or different than parts you’ve put together before for Poetic Collective and others?
It was really different. Before, it was more friends on a mission trying to budget living somewhere, trying to get together stuff on smaller trips and with Nike it was really concentrated on these trips that we did. I wasn’t really able to film back home because you need a certain type of camera, so it was really all on the trips. Like, the first ones we went on to Spain and then China and then LA—that was really motivating, knowing you couldn’t come back to get your trick. Everyone was really professional. You know the clip was going to look good, because the filmer was on point. I’ve been filming with good filmers before, but this just felt really professional. It was motivating skating with these super great skaters.


Do you feel like you pushed yourself harder this time around because of the environment?
Yeah, I would say so. And trying within this group to find what I can do. What’s my vision of the spot? How do I use what I can do in the best way? It was really cool, and I think especially filming in LA because we had a bit more time. We could look at a spot, sleep on it and then come back and try something. 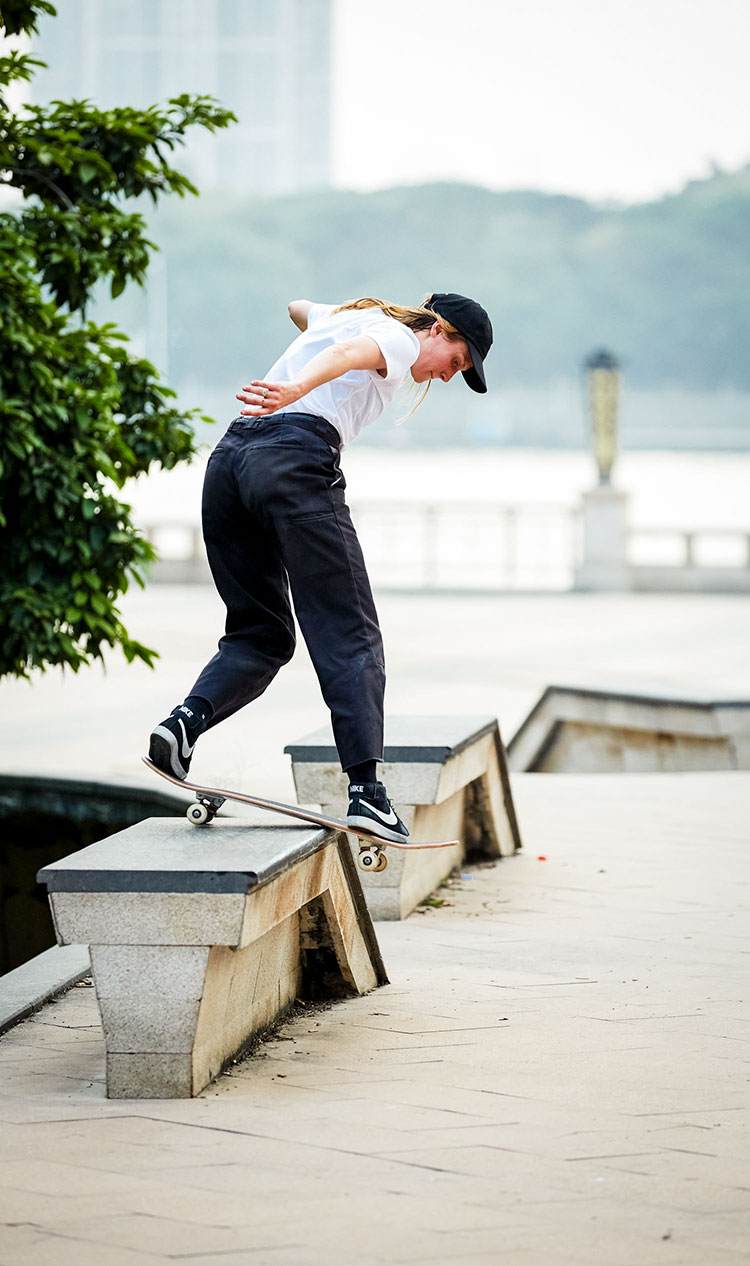 Classically trained wallie back lip to fakie. Bryggeriet paid off!

Did you have guides when you visited Spain and China?
We had a guide in China. His name is Johnny. He’s from Toronto and his mom is from China and he’s been living back and forth. He speaks the language and showed us around. Without him, we’d have been super lost. In Spain, we had Diego the Butcher. He was our TM, too, driving us around. He knew all the spots. We were really well taken care of.

How was it to film with Jason Hernandez?
He was really cool when we were in Spain and China, but when we came to LA, where he’s from, I felt it was something really different. I’ve never experienced such a motivational filmer before. He’s been filming there forever. You’d mention a trick and he’d find you a perfect spot. In the back of his truck he’s got concrete—he can fix any spot for you. He’s like MacGyver. He fixed up a lot of spots for us. That was really motivating. Having Tyler with us was also great. He’s really talented and got all the second angles.

The crew in this video is eclectic. Did you get to go out with everyone? What was that like?
It’s definitely a big mix of people. It was cool to get to know everyone. We were all together in China. For most of us, it was our first time there. It was a very interesting place. We are all super different, but through skating you can get along with anyone. You find unique things in everyone and it’s a really cool experience. And sharing a room with somebody, you get to see their little things they do when no one is watching. 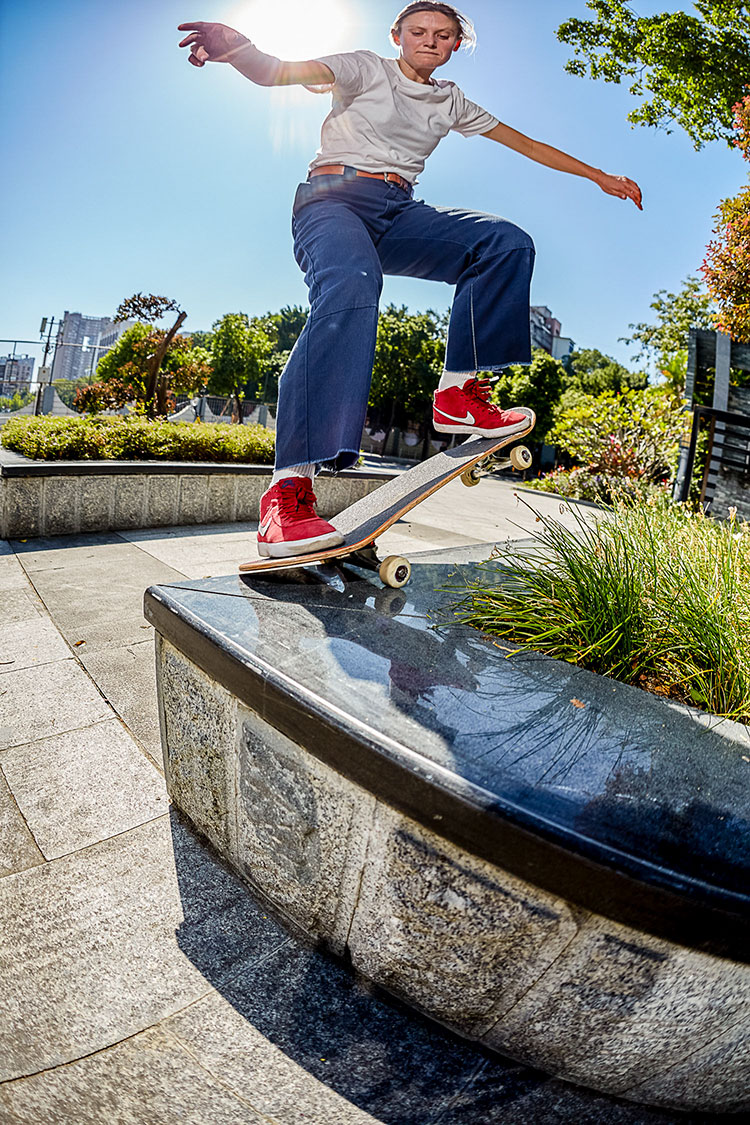 Sun’s out, fun’s out—frontside nosegrind on some marvelous marble

Any quirks you want to share?
I think I learned a lot. Before this I hadn’t been a full-time professional skater, like many of the others. I was learning how to use the foam roller, gym routines, how to do this little trick to make your legs or hips hurt less. Everyone has their own morning routine. When we were in LA, every morning Elissa would wake up early and come back with extra coffee saying, “Hey, I got your coffee.” That was so lovely. She does a lot of coffee in the mornings. In China I was sharing a room with Leticia and one morning I came out of the shower. I opened the door and she was wearing a horse mask while dancing! I got super scared and laughed a lot.

What influenced the tricks and lines you put together for this part?
A part of my influence is that I come from Malmö and the skate scene out here—growing up skating rougher spots. Even though China was a really cool experience, I really preferred skating the streets of LA instead of the perfect spots in China. They were just too perfect.

Yeah, you grew up in a crusty city because it rains and snows a lot. That makes sense.
Yeah, and I’m also more excited by the look of crustier spots. I get really influenced by the friends who you skate with, too. We inspire each other. 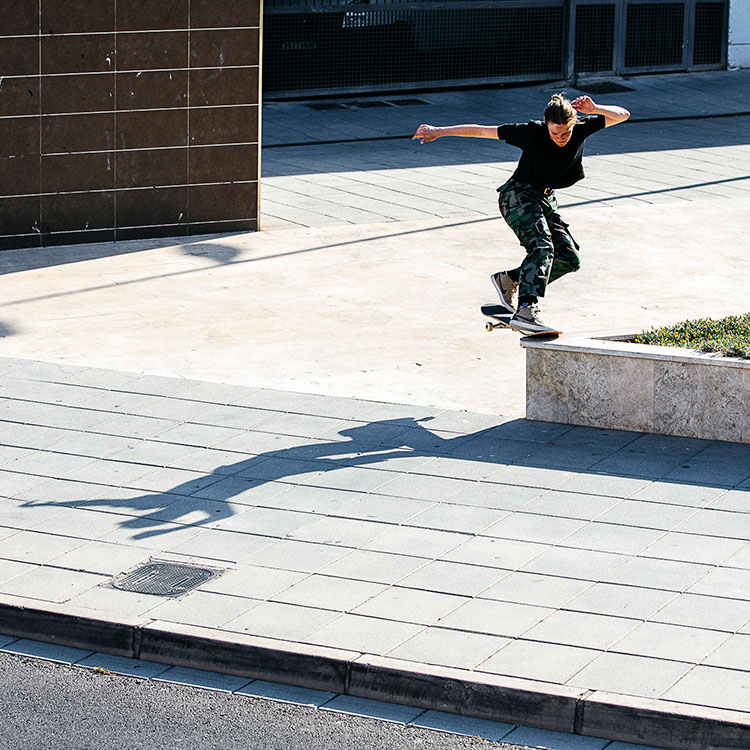 Who are your favorite skaters right now?
I just recently watched a part from Heitor Da Silva. I’m not sure how old he is, but he recently graduated from the skate high school, as well. He’s super inspiring to watch because he looks like he’s just playing around having fun but he’s doing unbelievable stuff. On Instagram, I like watching Nika Washington. It’s always exciting to see her clips; she’s got great style.

What are your hopes for the impact this video will have on a global scale?
I hope that it’s a part of pushing female skateboarding into a good direction, into being respected and being a part of the scene like it should be—not being its own thing on the side. I hope it pushes the level of what you can do as well—showing inspiration to people. It’s a big thing and it’s really cool to be a part of it. It’s almost unbelievable to be a part of it, actually. It’s going to be crazy to see it come out. 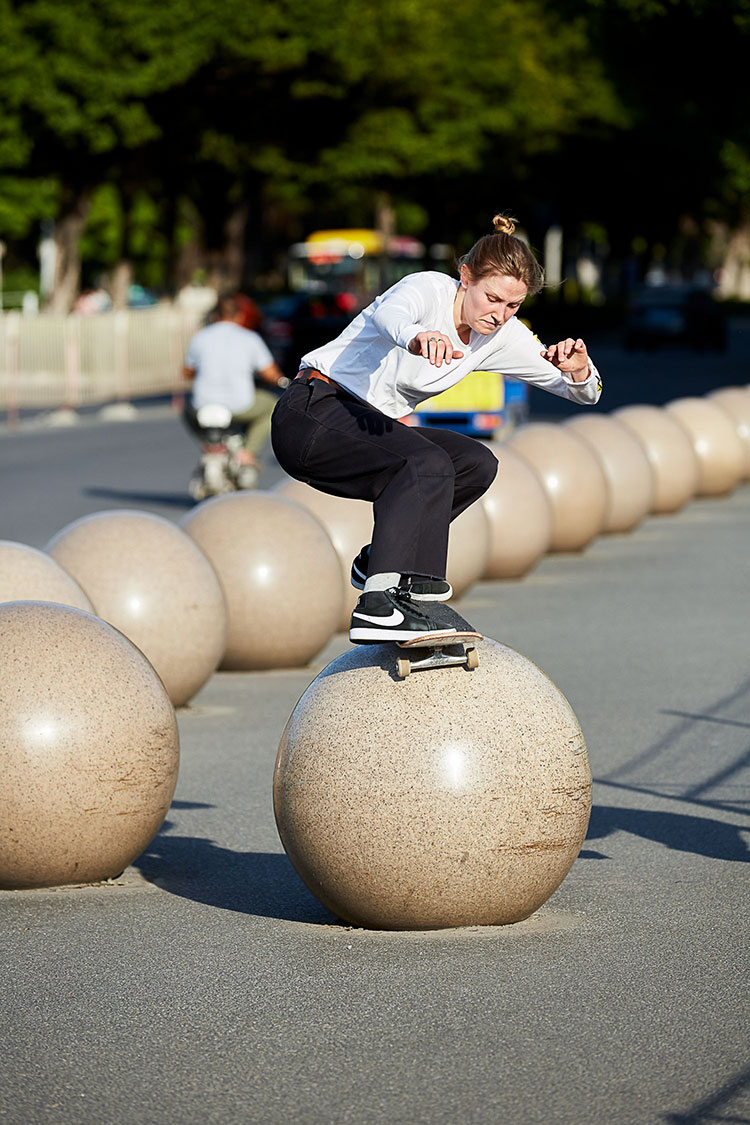 I’m so excited. It’s all my favorite skaters! Other than this video project, what’s on the horizon for you?
Filming for this video really sparked my feelings to film more. I just want to keep on filming now and try to get things I didn’t do yet to keep it up. When you’re in this motion of going out every day trying to film, trying to get a clip, I really love that kind of motion and I’m going to try to keep it going and not stop just because there’s not a certain project for it. We’re always doing stuff for Poetic Collective. I’ll be doing stuff locally and also some trips to Paris to film there. I’m actually coming to Wheels of Fortune!

What?! No way!
Yeah, we will be there! We are going to do something with the Nike team in Seattle first and I’ll also be there with the Swedes.

Sick, see you there. I had no idea you were coming! Any last thoughts or thank yous?
I’m super honored to be a part of this. Thank you for the interview! Shout out to the folks of Nike Europe, Colin, Vaughan, most especially to Danijel Stankovic for always believing in me—and the whole Poetic Collective team, Shout out to my boyfriend and best friend Sebastian and my family! 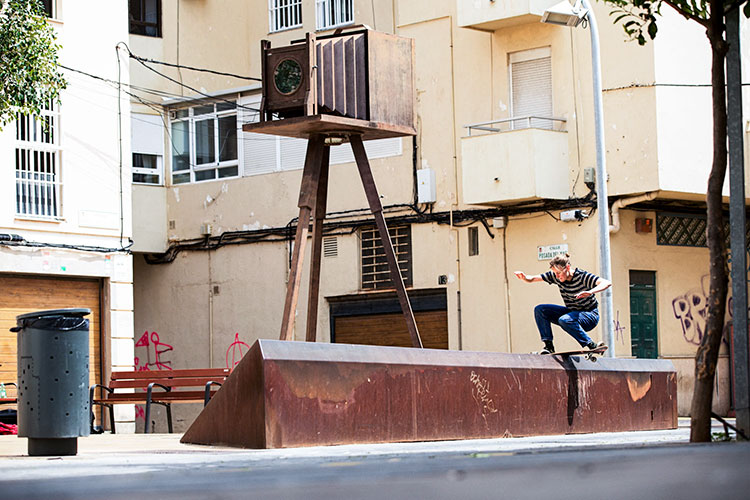