The Mom Who Skated 9-Months Pregnant 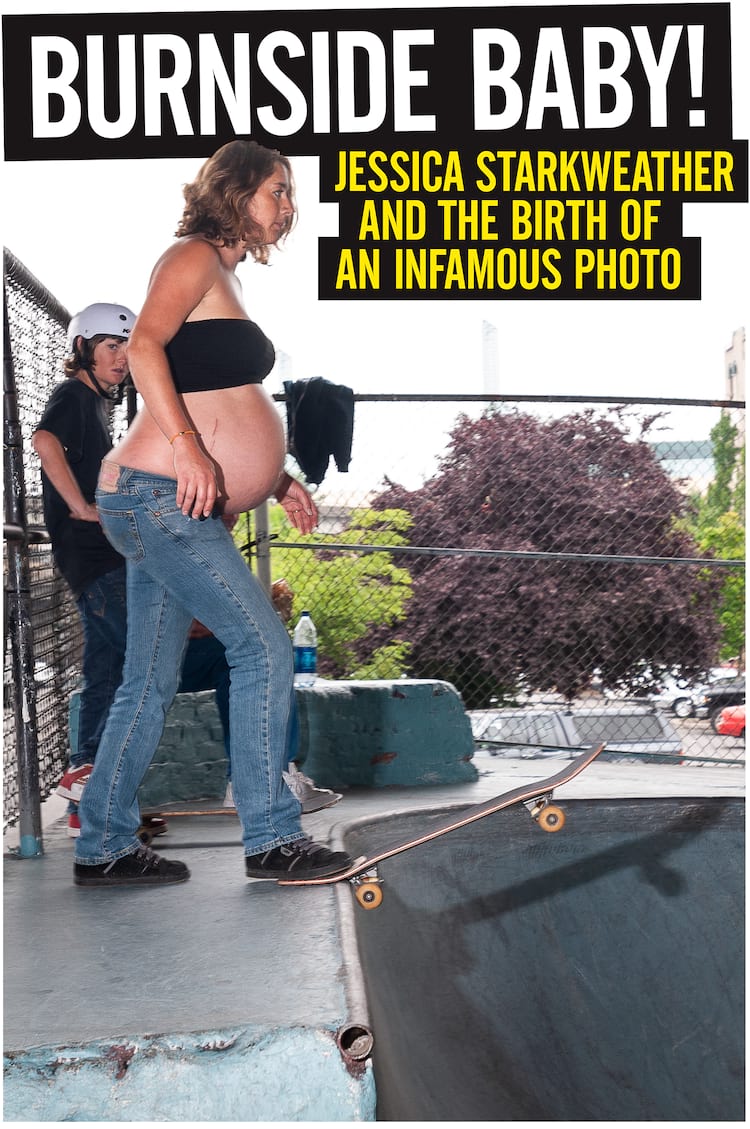 JESSICA BECAME an early viral sensation when photos of her skating Burnside while nine-months pregnant hit the airwaves. What the gawkers could never know is that she’s one of the strongest most resilient women I’ve ever met. From taking slams on concrete or being slammed in cyberspace, her confidence shines. Whatever the case, she’ll finger it out. —Ashley Trujillo


Where are you and what are you wearing?
I’m in Upcountry Maui and I’m wearing my Skate Army shirt my girl Chloe made.

Sounds pretty beautiful. Where’s your go-to spots around there?
We just got a new skatepark in Pukalani. Grindline just came out and re-did the Kihei park which isn’t open, but I jump the fence to skate it. Grindline also came out and built a huge park in Lahaina and one in Hana. Super sick.

You once told me how your stomach would rumble before pulling up to Burnside. What year was that?
That was like 1995-96. The summer of ’95 I was living with some of my best girlfriends in tents on the Sandy River in Welches, Oregon. We went to Windells snow and skate camp and my friend Kristi was skating. I was super inspired. Scott Stamnes gave me an old school board and showed me how to pump back and forth. I remember Scott told me I had good fakie control. His words meant so much to me and that lit the fire! I started driving from Mt. Hood to Burnside. I would be so nervous by the time I saw the Lloyd Center exit I would have to stop at Produce Row and take a shit. At that point my passion for snowboarding switched to skateboarding and I moved back to Portland. Burnside and the crew were wild in those days. It was a special time under the bridge. 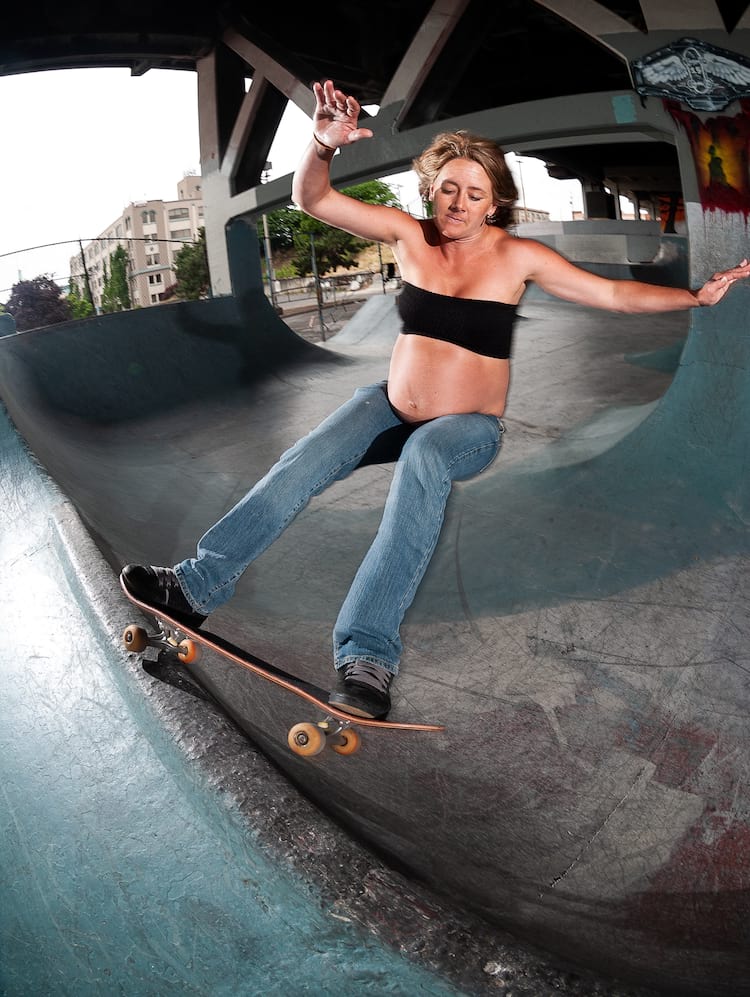 I remember my first time pulling up to Burnside and being scared shitless. You have two daughters, Sophia and Lucia. They were your crew you would take everywhere. When was Sophia born?
She was born September 1998. The summer of ’97 I rolled up to Seattle with Sage and some other guys. We went to the West Seattle big bowl and that’s where I met Mike Swim. He killed that bowl and is a really good guy. I moved to Seattle, we got a house and a few months later I found out I was pregnant. We moved to Southern Oregon where I grew up. That’s right when Dawkins had gotten the Talent skatepark job and Mike got on the crew and helped build all those parks. Then we went on the road with Dreamland/Grindline when they were still one company.

Rad. Then you moved back to Portland and you were skating every day. You were, like, nine months pregnant with Lucia when Hammeke shot a photo of you skating Burnside that caused a lot of controversy. How was that reaction?
That was 2006. The photo ran in Thrasher and I’m sure some people were shocked, but most people I knew were supportive. It wasn’t until about five years later it went viral.

I saw it as a fail on Chelsea Handler’s page. That’s when I realized she wasn’t down or funny.
Yeah, she had it up and Tosh 2.0 had it on his page, and that’s when the negativity came at me full force. I read some of the comments. Most were pretty horrible, but Dave Duncan and some others wrote comments fully having my back. I just turned my phone off for a few days and stopped reading the comments. I really don’t give a fuck what middle America thinks about me. Of course dropping in on the elbow at Burnside looks crazy to people who don’t skate. I’ve dropped in on the elbow more than anywhere else. I’ve done it blacked-out drunk barely able to stand up. When I found out I was pregnant with Lucia I went into training mode. I was hiking Mt. Tabor and doing the stairs almost every day. I was eating organic whole foods and I was in killer shape. I kept swinging by Burnside and would take a few cruise laps early in the day before the session would fire up. I felt super solid on my board. I ran into Hammeke on the fourth of July and said I wanted to get a couple pregnant shots. We met up on the fifth to shoot the photos and Lucia was born on July 12th. I didn’t jump off or bail once. I knew I had it. I am not going to allow other people’s ideas of what’s possible to set limitations on what I am capable of doing in my life. Yeah, maybe your chick had trouble getting off the couch at nine months pregnant, but I was preparing to go to birthing battle. My friend Kristi who got me skating was my midwife. Both my daughters were born at home all natural in water. I remember listening to Indian chanting music and feeling the deepest connection to women from thousands of years before me. It was a very spiritual experience I would have never had in a hospital. My daughters were born with the brightest eyes. Drugs are for partying, not labor.

Yeah, you’re in charge of your body. You can and will do whatever you want.
Yeah, like Bethany Hamilton just released her new documentary, Unstoppable, which is phenomenal and so inspiring. It shows her surfing Pipeline pregnant. Pipeline is known as one of the deadliest waves in the world. Almost any ding dong who can drop in could skate Burnside. I surf almost every day and am in no way ready for Pipeline. Maybe in a few years on a small day—maybe.

Talking about gnarly shit, you recently lost a few fingers in a lawn-mowing accident. What the fuck happened?
I had gone to check the surf and it was small. I decided for once to not blow off responsibilities and get the lawn mowed—should have blown it off. I was doing the fence line and some vines had wrapped around the front wheel. I grabbed them and yanked really hard expecting them to come loose but they stuck and the momentum took my fingers just under the side of the mower which was running. I looked at them and knew I had fucked up bad. My first thought was, No surfing. Luckily my mom was able to come out for two weeks and take care of me. I want to say thank you to Hang Loose Lounge and Da Babooze Bar where I bartend for raising money and holding my jobs for me. If anyone is ever on Maui come buy my favorite customer, Dirty, a beer and support the best dive bars on Maui! 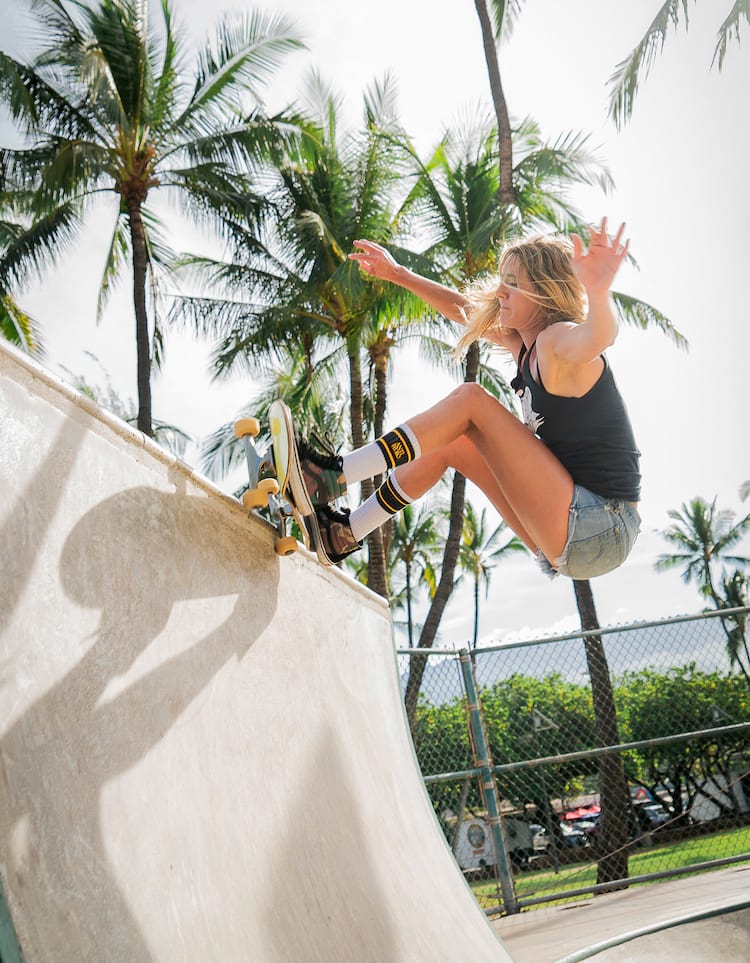 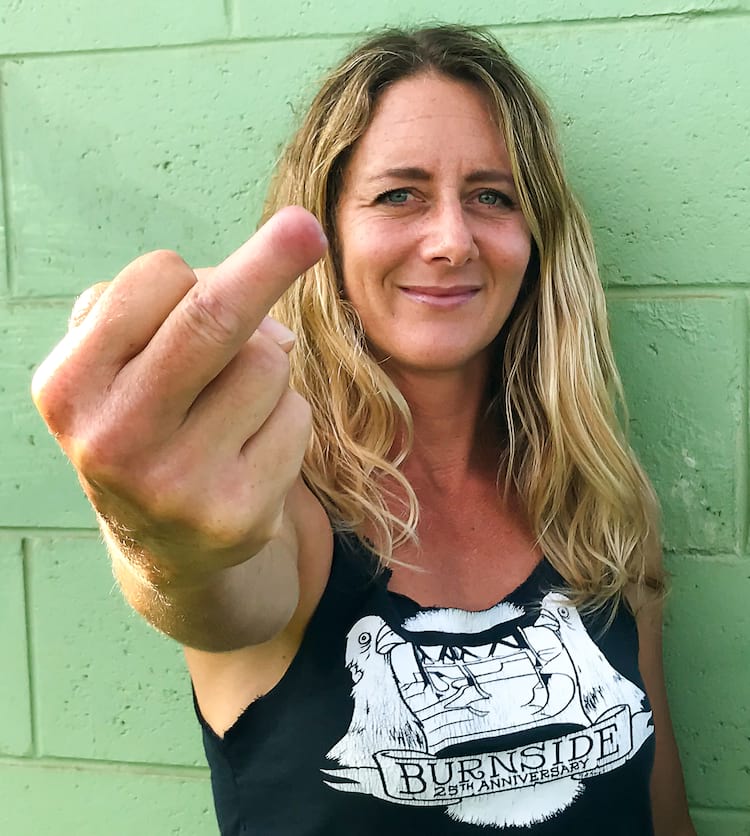 That’s awesome! Speaking of bars and booze, you’ve been off the sauce for a bit, right?
The end of January will be three years. Skateboarding has a pretty heavy party scene and Portland goes hard. I had some rough years with drugs and alcohol and tried multiple times and multiple ways to stop using. Alcohol was the thing that always released the beast and got me back on drugs, so I had to cut it out. It was about two weeks after I had stopped everything but weed. I was sitting on my couch still feeling like shit looking out the window at the sideways 38-degree rain, and I asked Austin and Lucia if they wanted to move to Maui. It was a unanimous enthusiastic “YES!” We didn’t even visit, just made a leap of faith. We moved out here and started surfing almost two years ago. I love the feeling of sketchy late drops. It feels like dropping in on a backyard pool and slamming on water fucking rules! It is pretty amazing to have found something in my early 40s that gives me the same feeling I get from skateboarding. I am an adrenaline junkie and surfing is my new drug of choice. I will always be 100-percent skateboarder at heart. I hate hearing people say they are too old to skate. If you want it and take care of yourself, you can do it forever. Keep grinding
for Hubbard, P-Stone, Dorfus, Kyle and Phelps.
© 1981–2021 High Speed Productions, Inc.