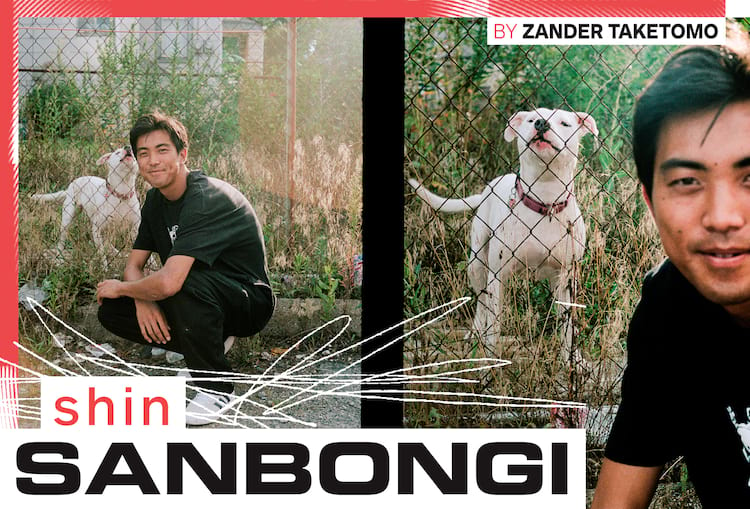 It’s not every day that a Japanese skater gets their name on a shoe, but Shin Sanbongi isn’t your everyday Japanese skater. Before traveling with the naturally-talented surfer and skater while filming for his new part SHIN, I was under the impression that he’d done this before. But somehow, this is his first video part. I think this observation speaks loudly for Shin, even though he tends to be on the quieter side. Yes, he’s a man of few words, but not because he has nothing to say or because he learned how to speak English on skate trips. After getting to know him, it has become clear that he is very intentional about what he puts into the world and he stands by it. He may not be one for small talk, but his skating speaks volumes. Luckily, I was able to get him to open up about his process while filming for his part and growing up in Japan.

Interview and photos by Zander Taketomo

Hey, Shin, you currently live in Chigasaki, right? Is that where you were born?

I actually was born in Tokyo, but I grew up in Chigasaki. It’s directly south on the coast.

So what is Chigasaki known for?

Surfing is really popular here. It’s the birthplace of surfing in Japan. 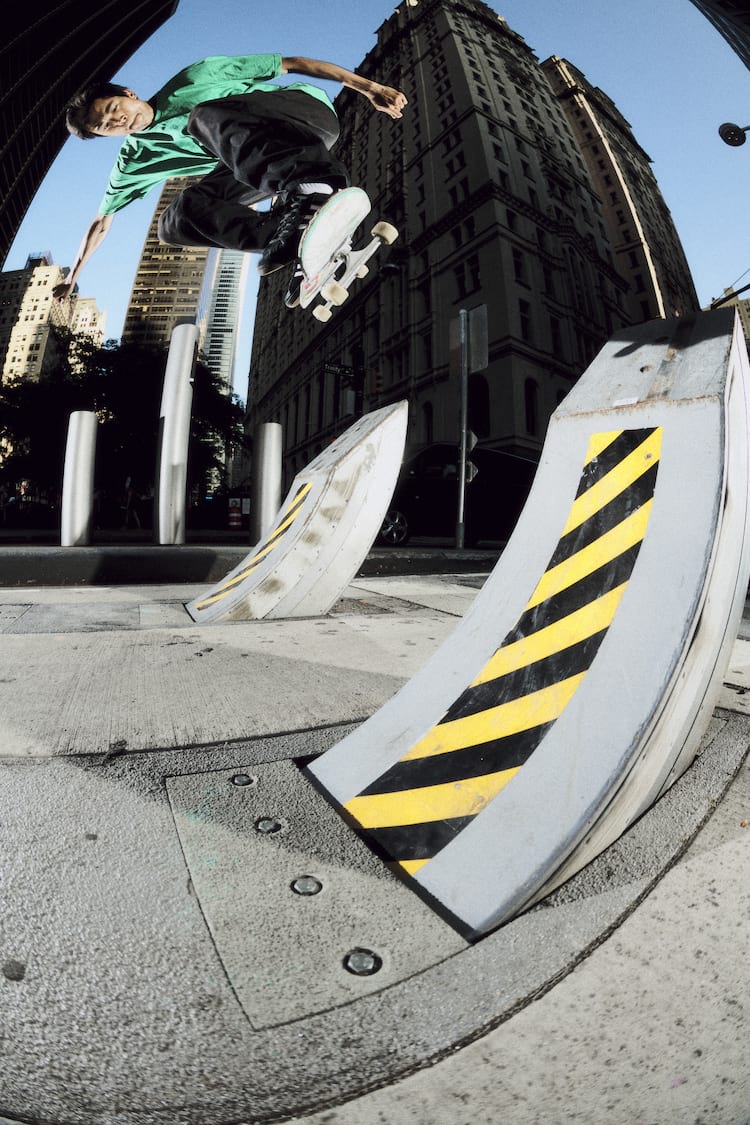 Filling the gaps in the conversation with a streetstyle channel hop

When did you start surfing?

I started around 15 years old. My friends were already good so I was thinking, There’s already so many good surfers here, maybe I’ll focus on skating. I like how surfing influences the feeling of skating. The culture is really strong here, too. Even though it’s passed through generations, it stays very local. People aren’t traveling the world to do it—they surf purely out of love and have normal jobs.

Is that how you first got into skating? Growing up, what was the local skate scene like there?

When I was little, my dad taught me how to surf and one day I saw him skating in front of my house, so he got me into skating as well. We still go out and cruise sometimes. The skate scene has some influence from surfing, but there’s also technical skating happening here. 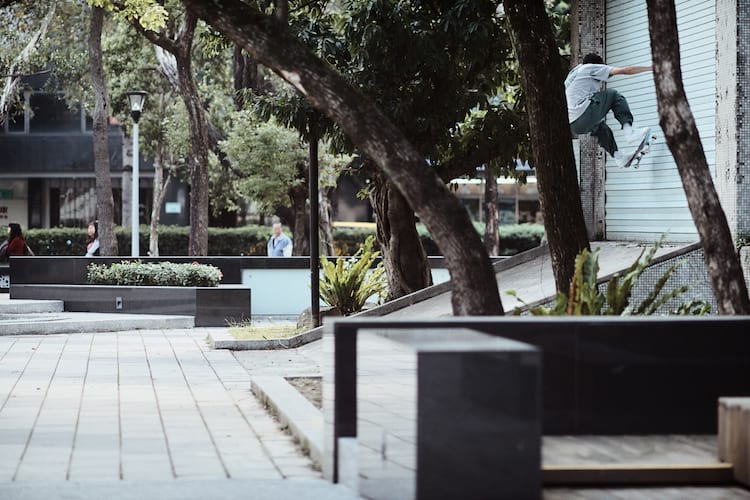 So what do your parents do? Are they into your skating?

They’ve always been very supportive of me skating. My dad always has done something different. He changed jobs a lot while growing up. If he wasn’t interested he’d change what he was doing—always loving life. Right now, my father is a gardener and my mother is a company employee.

I feel like you have a strong appreciation for food when we’re on trips. What would you say is your favorite bite while out skating?

Inari sushi, which is marinated tofu pockets with sushi rice inside.

Did you grow up watching Japanese skating?

I didn’t really watch Japanese skate videos, mainly the bigger ones coming from the States. I was really into Antihero. I’d skate transition, mini ramp, not really street skating, so I’d always watch hesh videos like Shotgun. But one of my all time favorite parts is Jake Johnson in Mind Field—creative and simple. 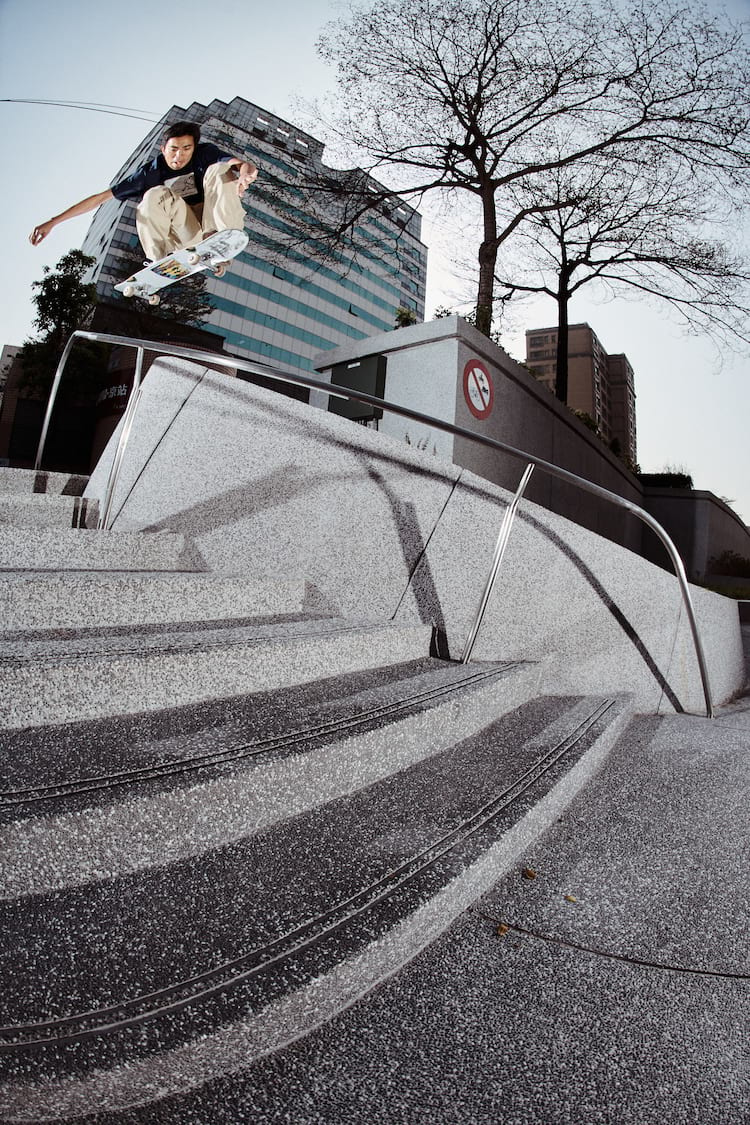 Catching air off a full speed wallie? It's no wonder Pontus likes this kid

Tokyo has always been known to be strict against skating. What do you think the reaction will be after the Olympics next year? Will Tokyo ease up?

I think people will definitely be more aware of what it is, but at the end of the day, I don’t think it will change the way people react to it.

What about you? Are you into the idea of it?

I’m mainly excited because I think my teammate Oski will be in there! Tokyo is building up the city a ton and I’m sure new spots will be made so I’m looking forward to that.

You learned English through skating, right? What was that like?

The first time I went abroad on a skate trip, I didn’t speak any English. I’d be with the locals and didn’t know what they were saying, but I’d feel it out and responded through body language when I didn’t know the words. Once I started going on more trips, I gradually felt what other people were talking about and was able to understand a little more and more. I think skating itself has filled in the blanks a bit when communication is harder. 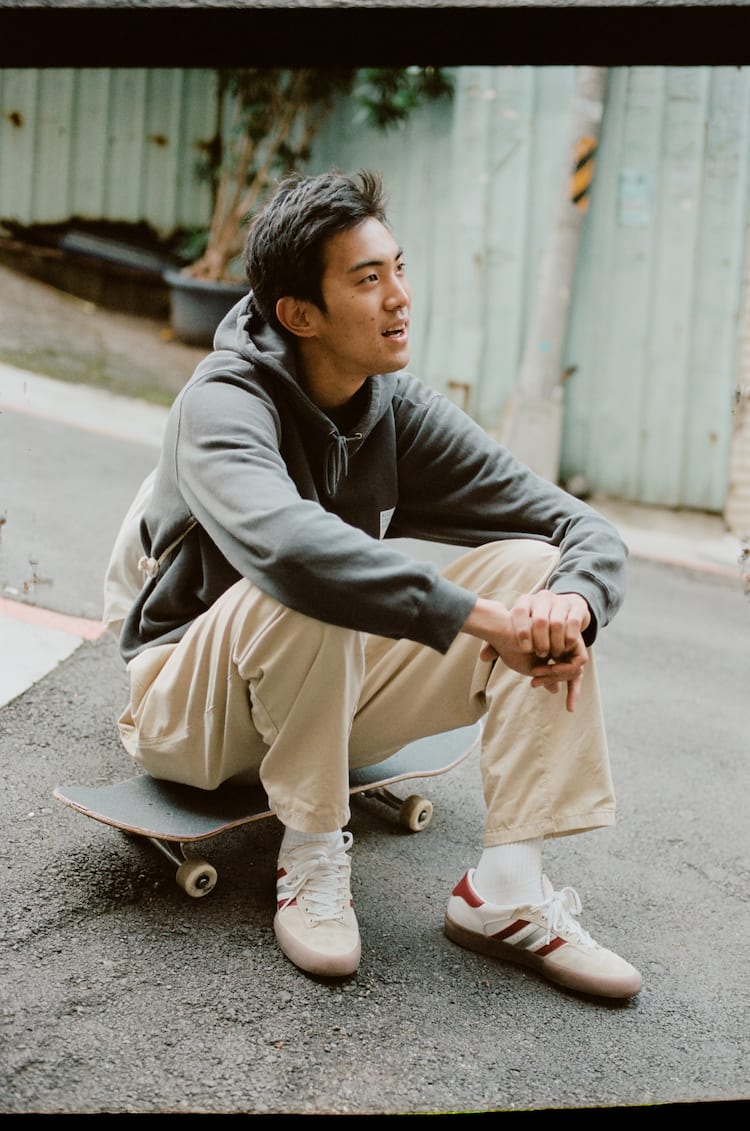 Did you finish high school?

No, I quit when I was 16 years old. I worked part-time making Udon noodles for a while. I wanted a flexible schedule to surf and skate.

Did you have any other jobs?

I built walls for gardens so I could learn concrete and use that knowledge for skating and building DIY spots. So now I know how to use concrete pretty well. I only did it for a year, but learned enough to do what I need. It’s also really satisfying, because I now have a better appreciation for where I live and how things are built. After that, I did construction. I learned how to build a house, starting with the wooden structure. It’s really hard work. I got that job from a friend of my father who skates, too. He was actually at the park the first time I ever went skating with my dad. When I started traveling more for skating, I told him that I was maybe too busy to continue and he understood. 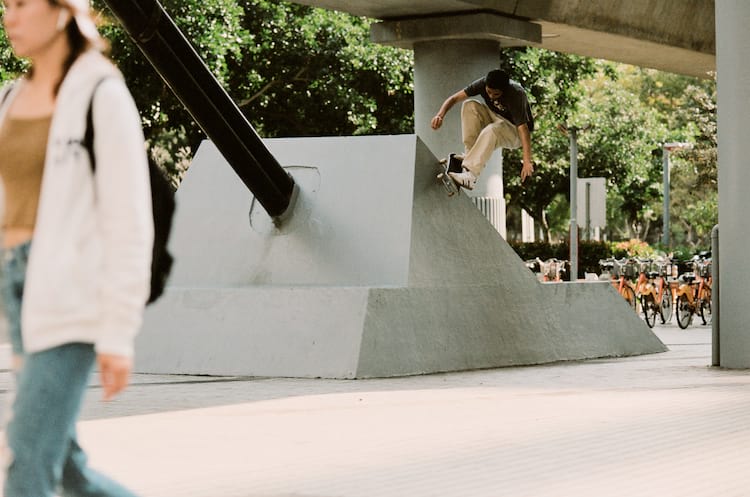 Who cares if he could only say hello? Good style is an International language, which Shin speaks fluently—frontside roll in

Is there anywhere you haven’t traveled that you’d like to go?

I’d like to visit all of the European countries and then Brazil and Argentina.

When you go to a city for the first time, how do you approach it?

I begin looking at the flow of the city and flow of the people. Once I understand that, I just enjoy it and feel comfortable when I skate. If there’s any planning, I’ll usually look for the bank and wave spots, mainly because they’re fun.

You traveled so much this year. You’re always on a trip. Do you try to film when you’re at home?

Yes, I traveled so much! When I am at home, I just skate with my friends and enjoy taking pictures. But I still film a little, too.

Your sponsors are very internationally located. How did that all come together?

A few years ago, I went to Sweden with Uru from Kukunochi distribution. We went for one week and he wanted to introduce me to Pontus. He’s always supported me—not sponsored but gave me boards and advice. Him introducing me to Pontus at Polar is an example of that. He’s always used his connections to help Japanese skaters. 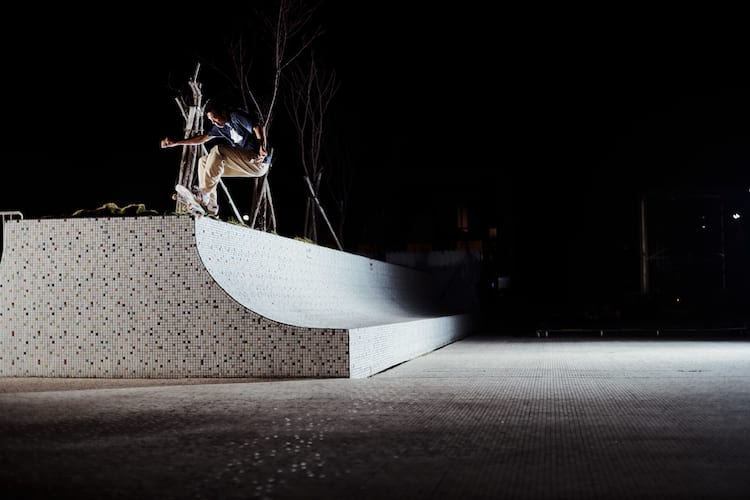 When did you go on your first Polar trip.

The first trip was to Paris, about two years after we first met. I went to Sweden every summer since I met Pontus. One of those trips was a month long and I was planning to stay in the Polar office. There was some confusion, and when I arrived I learned that Pontus was leaving for Paris a few days later. So I was in Sweden and he wasn’t going to be there. Shortly after this news, he told me Hjalte hit his head really bad in DC while filming the part with Bobby Worrest and couldn’t skate. So then there was room for me to go. I got really lucky even though it sucked that Hjalte got hurt. So that’s how I met the whole crew, on an unexpected trip to Paris for ten days.

What projects have you been working on?

Currently, the two projects I’m focusing on are a Polar video and an adidas project.