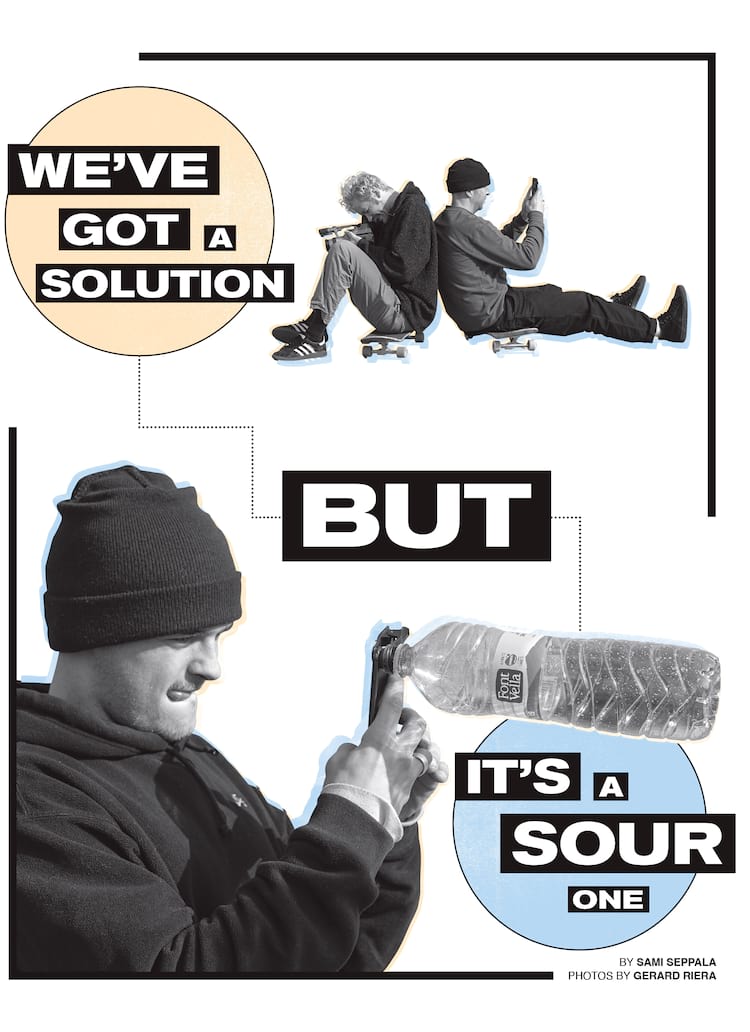 I’m on a flight. I wasn’t supposed to be, but here I am. I got a hair-whitening call from Bjorn and once again had to leave my serious adult life behind. Apparently the company card had been used beyond repair. Too many pizzas and chupitos for not much footage and Thrasher needs an article right away. And, yes, bring a charger for the camera, too. I land in Jerez. Sour Solution is kind of based in Barcelona, but for the past few months they’ve rented a house in the southwest region of Spain to finish off their third full-length, aptly named The Sour Solution III.


An instant classic, Gustav and the crew achieve the rare threepeat with their newest full-length

I say “kind of based in Barcelona,” as their physical presence is rather fluid. Oscar flies in from France. A bunch of dudes come in from Sweden; some drive from Barci. Snape, originally from New Zealand, has relocated to London after his visa burned and Barney comes from wherever Barney happens to be. Simon is probably lost in the woods or meditating with the reindeer while spot hunting. Sticking to its mismanagement standards, everyone is landing at different airports at different times. But what the hell, after COVID lockdowns and general bullshit it’s good to be here. And as I join the party, it has been going on for some weeks. 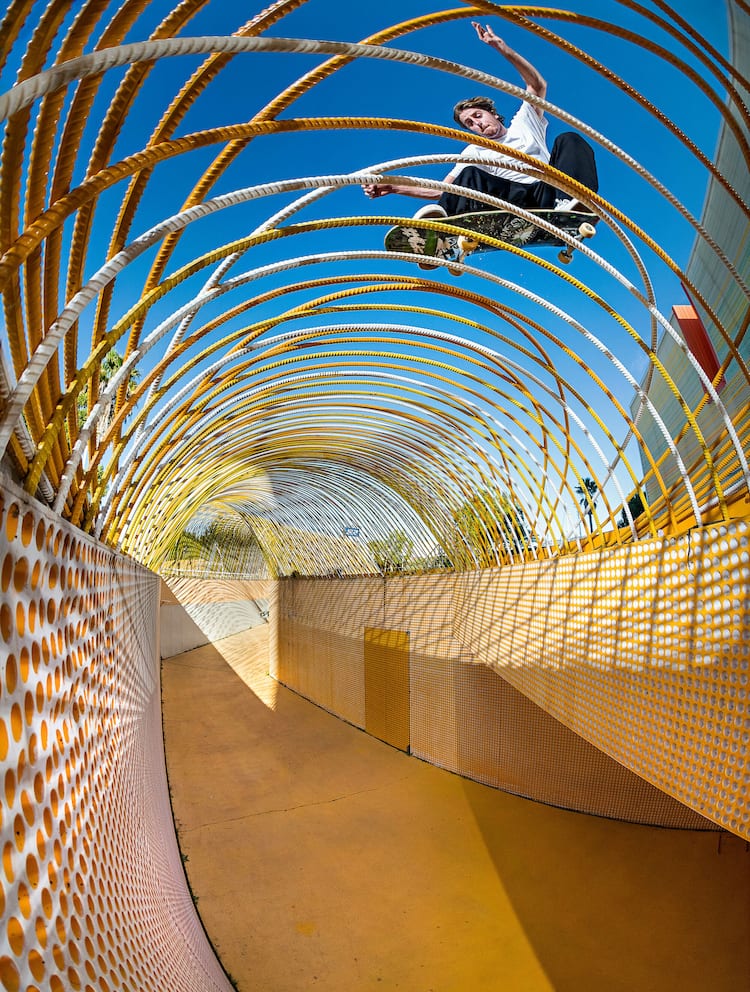 Will the rail survive? Nisse Ingemarsson crooked grinds a rainbow after downing too many meatballs 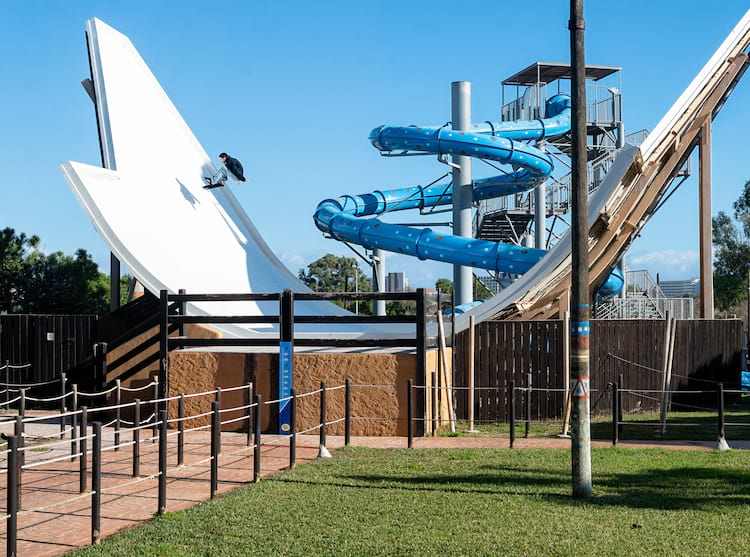 Snape hates this photo. Not sure why. Frontside flip in the waterpark. Maybe that’s why 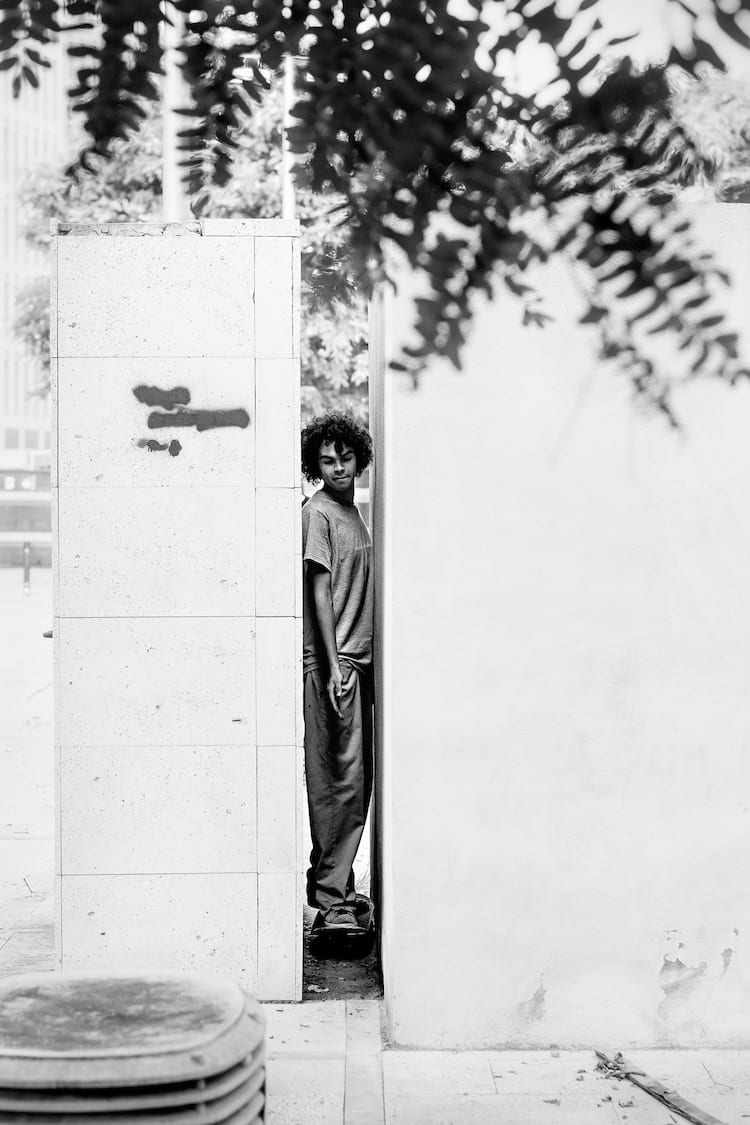 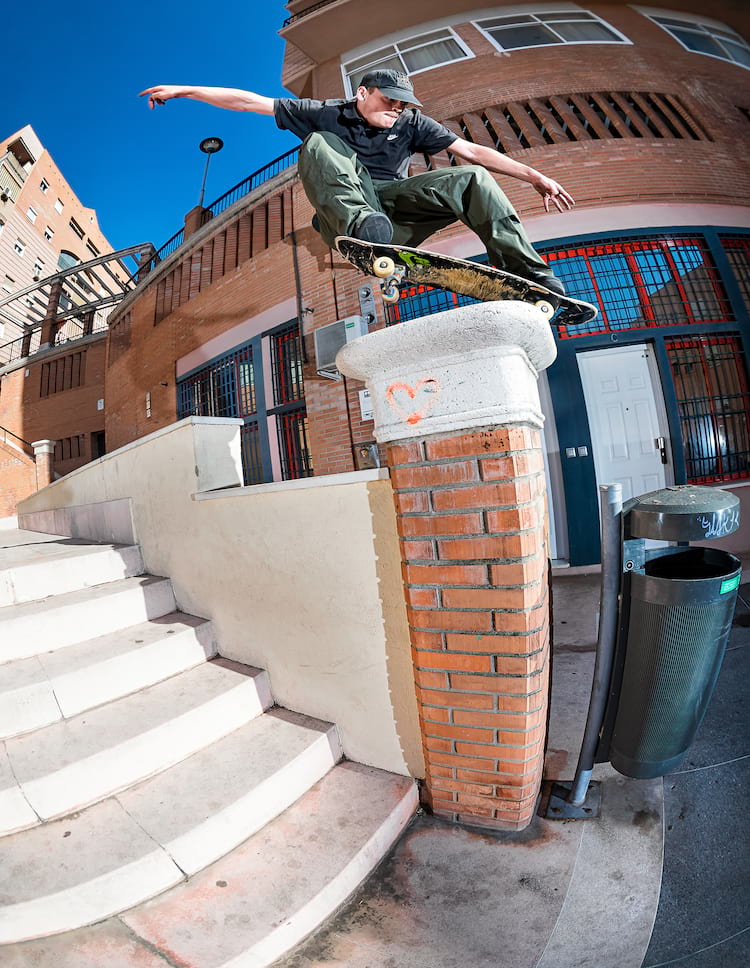 It’s Friday night and the sight in the house is one of utter chaos.
In the living room, the music is blazing.
Axel “the new guy” is slamming cards on the table and Josef is screaming insanities.
Meanwhile, Gerard is touching up photos in the corner. Burnett is giving heat from Thrasher and the stress troll is lifting its head.
On the other side of the room, the setup is slightly more intelligent, but the chess board on the table doesn’t tell much of the IQ of the situation.
The electricity goes off once again and the feeling is one of joyful intoxication and confusion.
The van is waiting outside to head to Malaga where Nisse will be landing in a few hours. Ah! But his plane is broken and delayed. Chill.
Now it’s Marre’s turn to move. He looks smart but I doubt if he is.
Lomar moves back.
And the clock runs out.
Lomar loses. 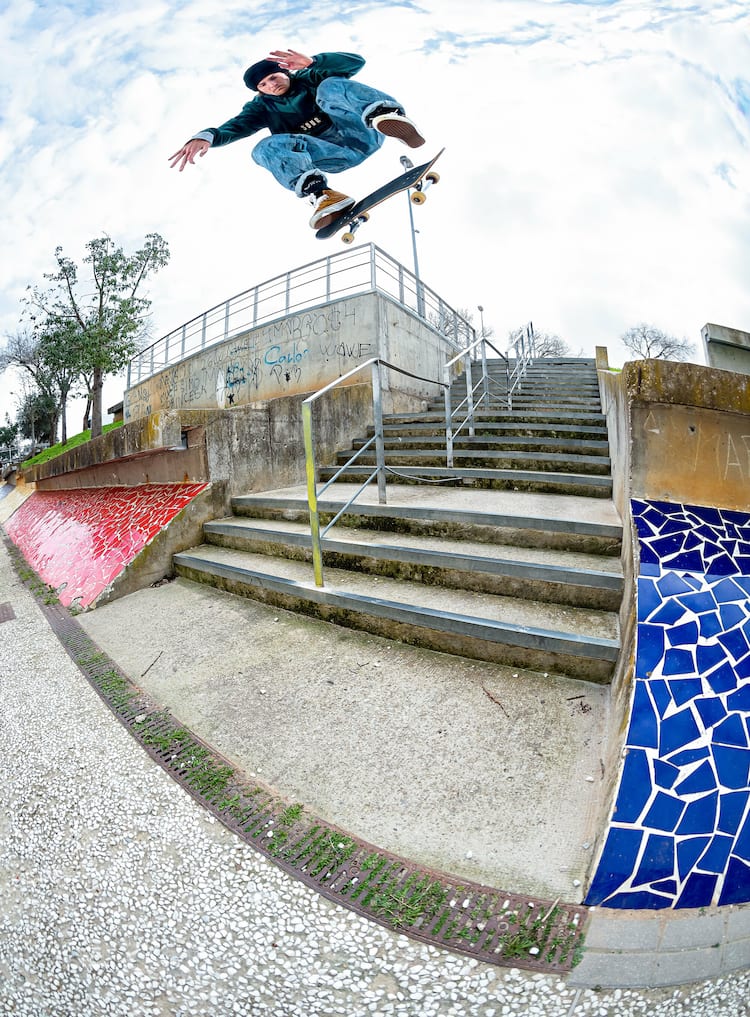 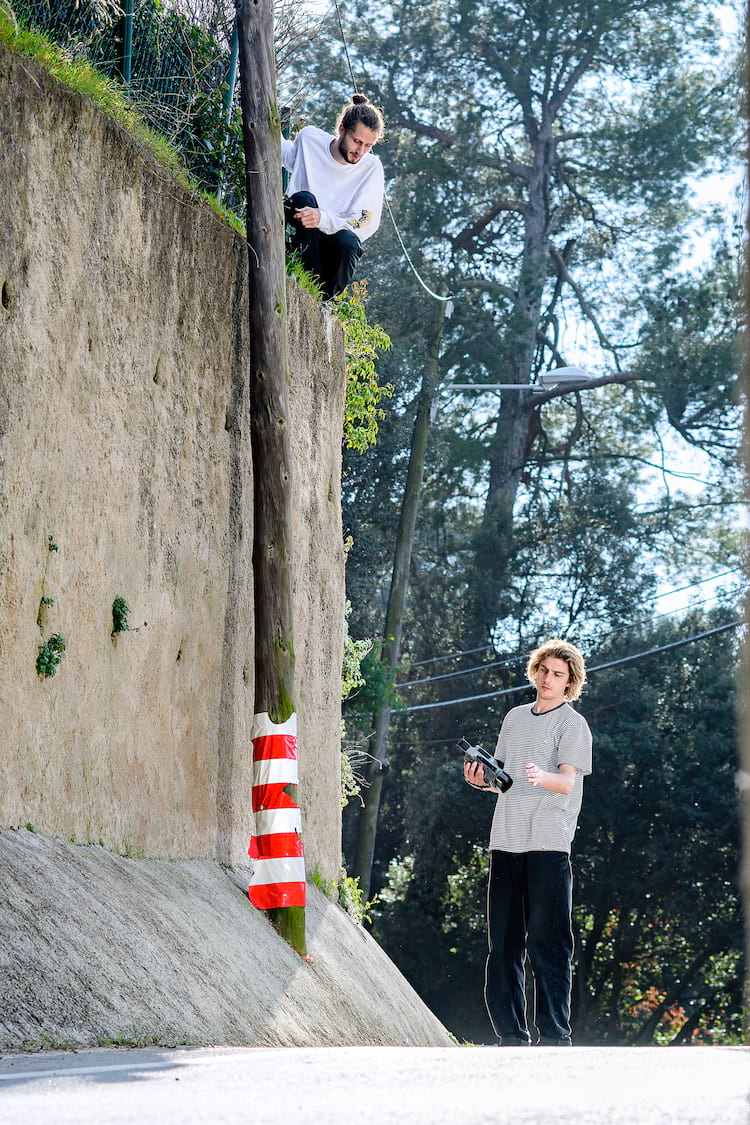 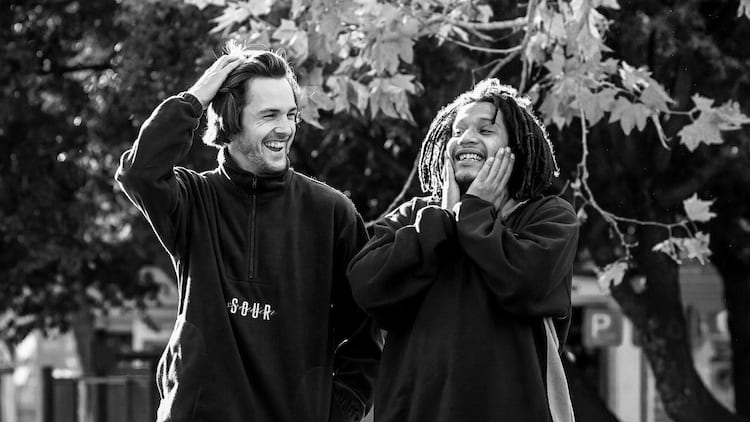 He gets up and stumbles up the stairs to the terrace. I ask Lomar—the resident art über god—what does he think of it all: the trip, being back behind the lens after some years? There’s a lost gaze in his eyes, a deep emptiness within. There’s too much art inside of this one to make much sense of what is actually going on around his axis.
Lomar: “You know how everyone always talks about the good stories from a trip? Well, maybe you should just talk about the bad stories.”
So what would that be? Write about Josef’s downhill slam? Tell how he ate shit and slid 15 meters on his elbow and screamed in animalistic joy. Tell how Gustav gets up early to play Call of Duty: Warzone and how Josef has the late shift. Who the fuck are these guys?
A bunch of humble weirdos hovering all over the spectrum with the entire alphabet in use: OCD, ADHD, Judas Priest, Pink Floyd, Leila K, introverts, extroverts, messy, tidy, chaotic and everything in between is represented here.
And in the middle of it all you have the zen-like presence of Gustav—not too bothered by anything, having his own way in his own terms, in his own time zone. 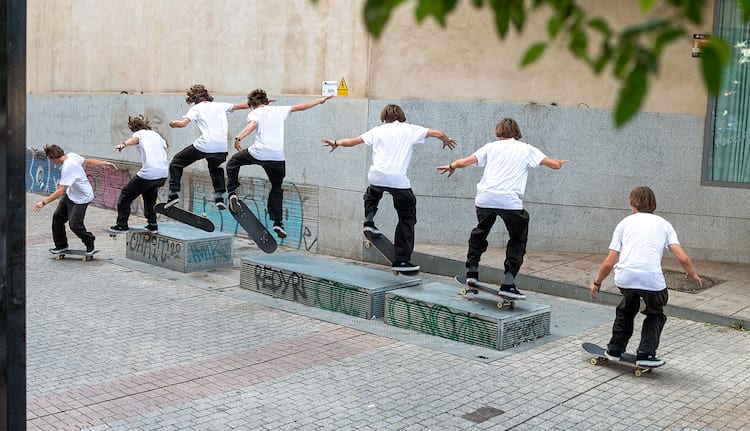 Gerard, can you please fax us the missing frame in this sequence of Albert Nyberg? Ollie, ollie, half flip, half under flip tailslide to fakie

Albert is drinking beer.
And why is this house H-shaped?
Fuck, Alex is playing the stereo too loud.
What ya saying?
Saying about what?
About Sour.
It’s Axel’s first trip with the boys.
Axel: “Drum and Bass.”
Josef: “Terrible. Nasty.”
Axel: “Talk about the toilet downstairs. Murder, stinking murder.” 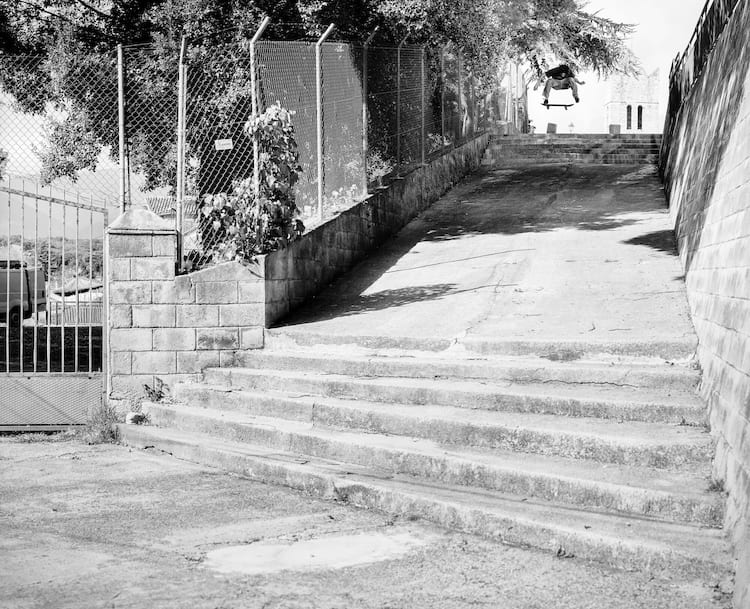 And as I look deep into my glass I wonder, How did it all happen?
And from out of a light bulb comes a fairy and tells the story:
Around the mid-last decade, the boys followed the self-appointed messiah Bjorn—along with his utter madness and naivety—and took the plunge. They went all in on the independent-skate-company struggle and everything that comes with it. They carved out the first DIY office (nicknamed The Cave) into the moist, cockroach-filled walls of Barcelona.
Somehow the company managed not to collapse at the starting line.
It found its fledgling feet, gathering strength and momentum with every passing month. It improved bit by bit while they made shitloads of mistakes along the way, learning to eat angst for breakfast. 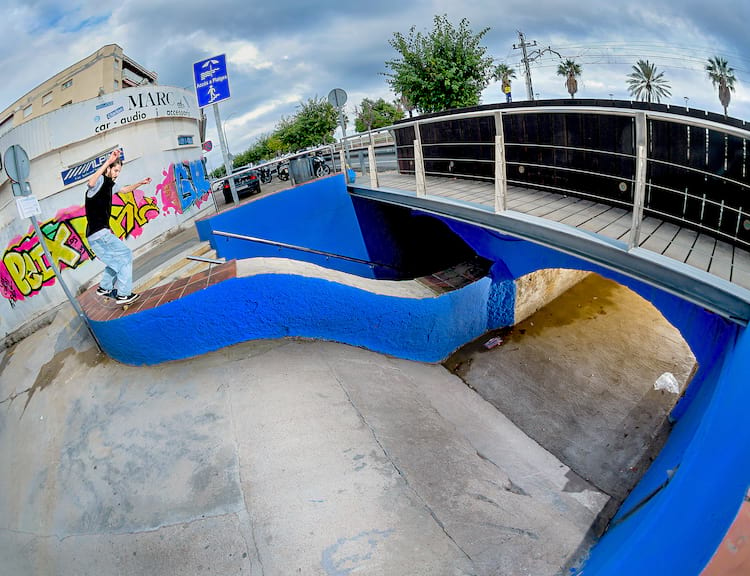 Simon Isaksson hoping to see the light at the end of the tunnel. Nose manual into the wave 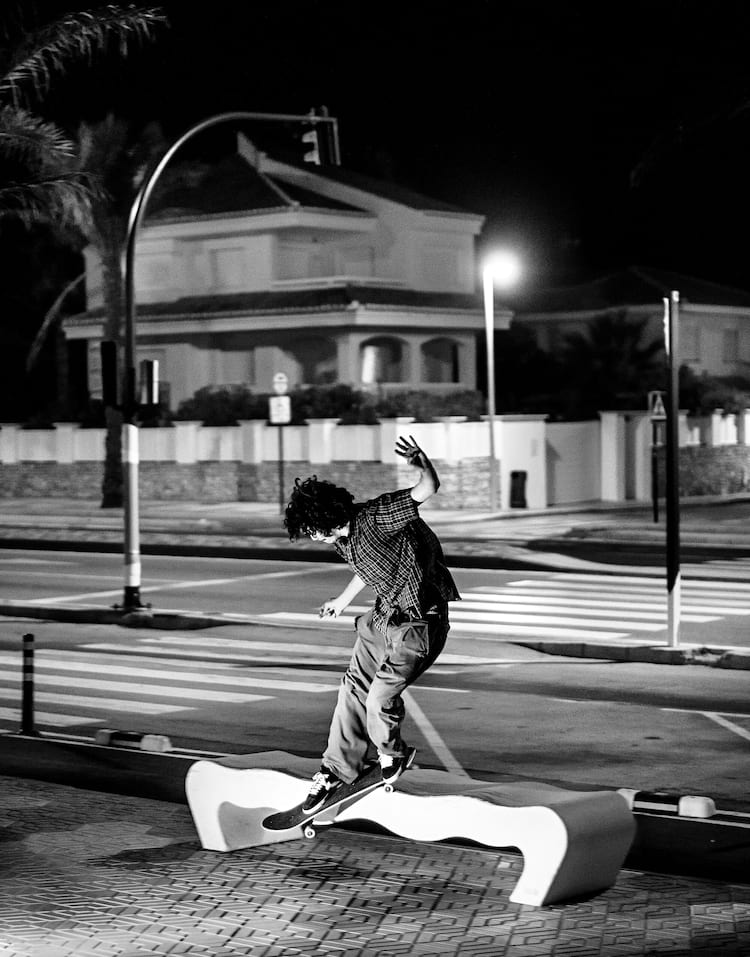 Vincent with the lowest back Smith ever published 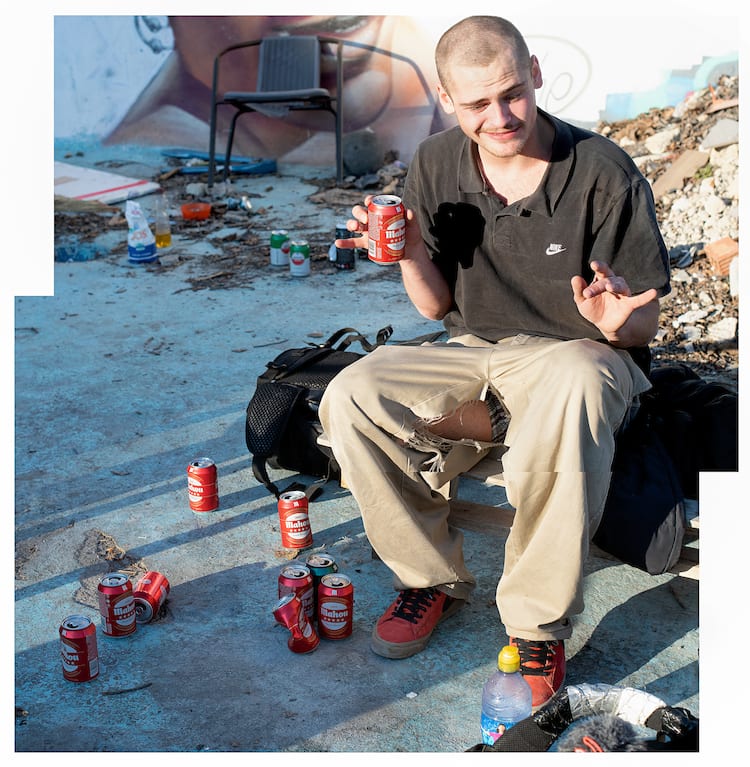 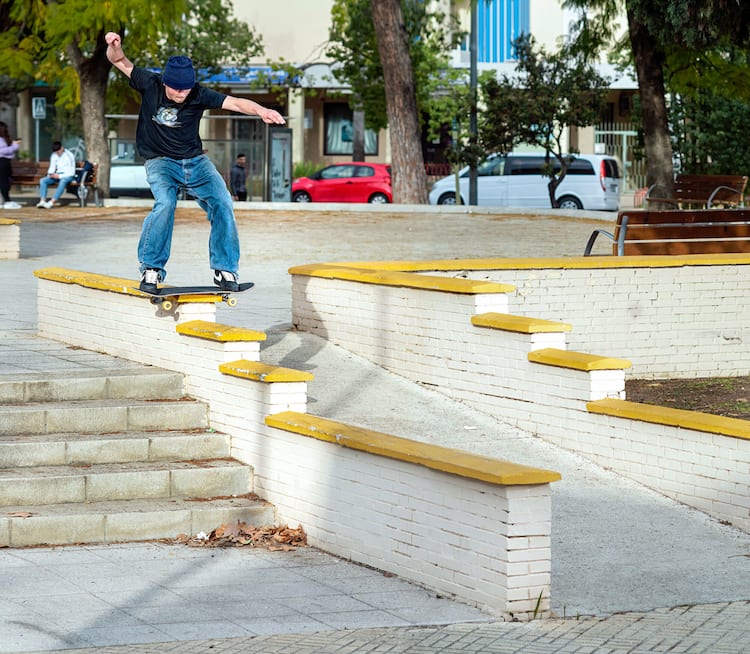 Lomar shot and edited the first video, then decided to leave for Norway to attend a high-class film school that only admits a select few applicants. Gustav took the filming reins, informing everyone that he wanted to make a video (it was his first full-length). He put together the second offering in immaculate style without compromises. 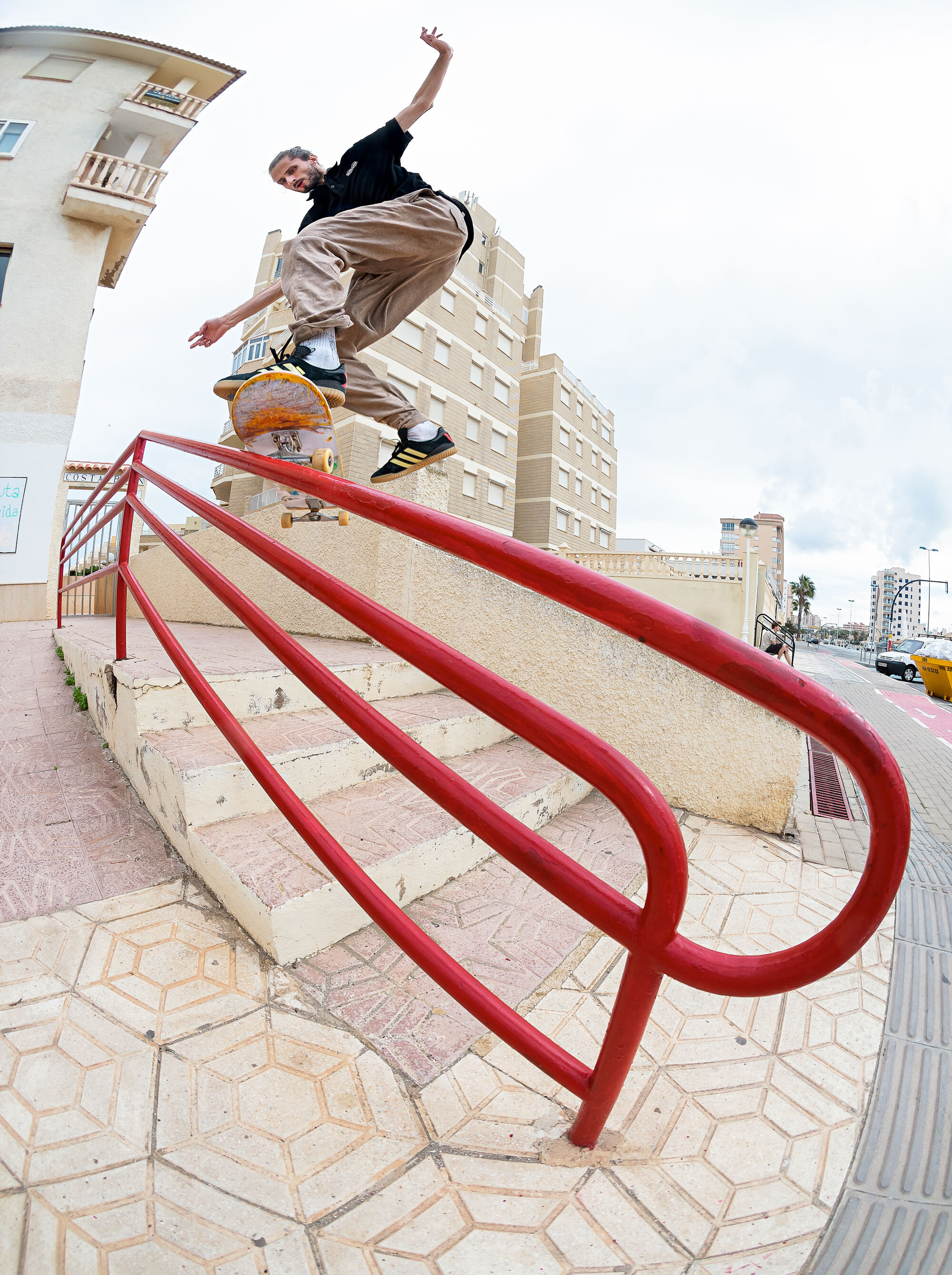 Tønnesen gets away with a three-stair bigspin front nose. Or does he? 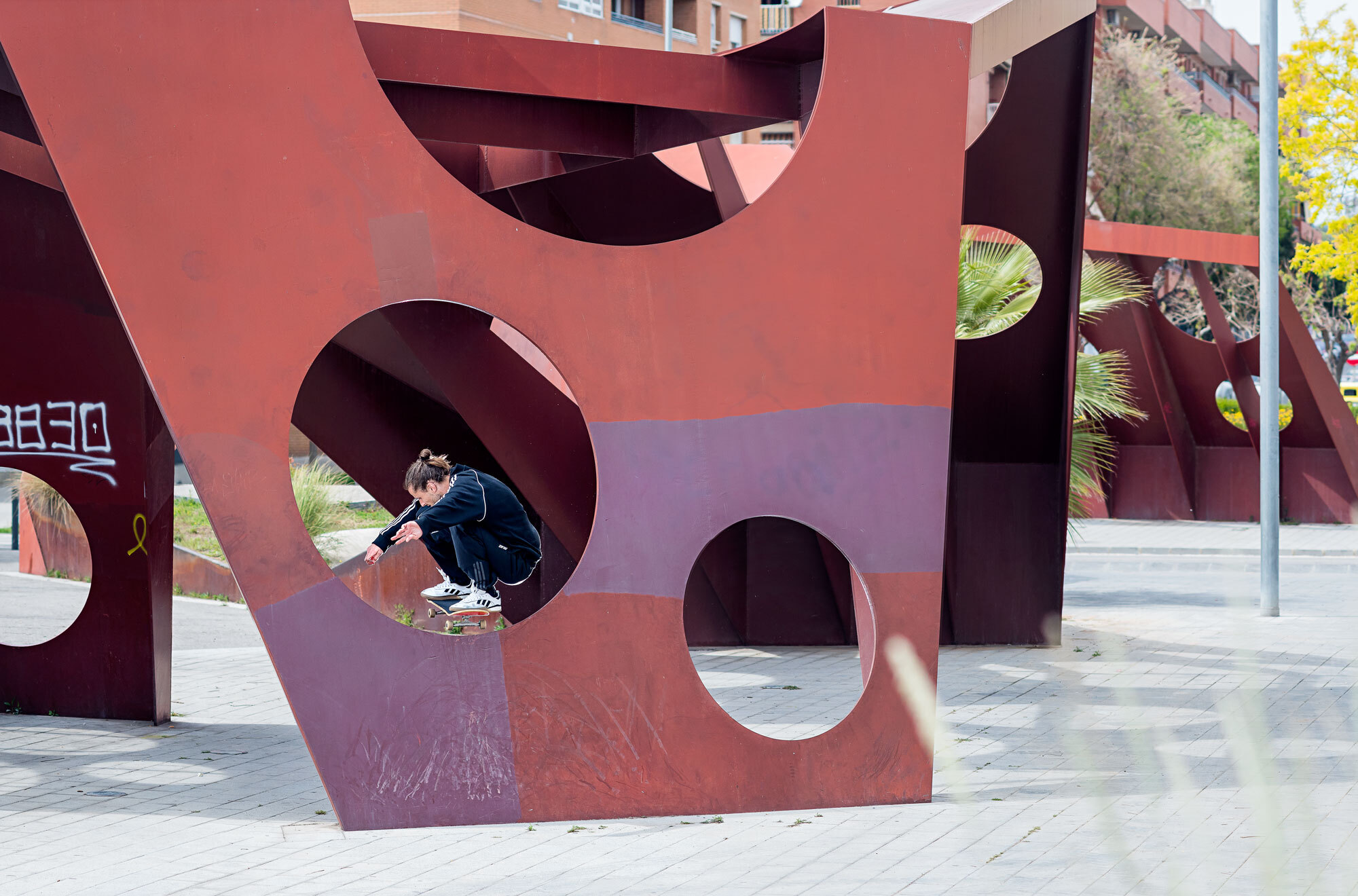 Some of the swiftest feet on the planet, Gustav goes backside no-comply to Pupecki grind

Indeed, it was the experience of making the second video that really glued the team together—made them trust each other’s madness and unique qualities, made them respect each other’s shortcomings, while taking the piss out of themselves and not being too serious about it.
And somehow this utter mix of personalities work.
Everybody has the same end goal in mind, but they’re taking completely different routes to get there. And somehow they keep improving and evolving as they do.
Laughing to yourself is the best laugh. And Sour are the masters of it. Self-irony is a strong tool. That much you learn from growing up north. 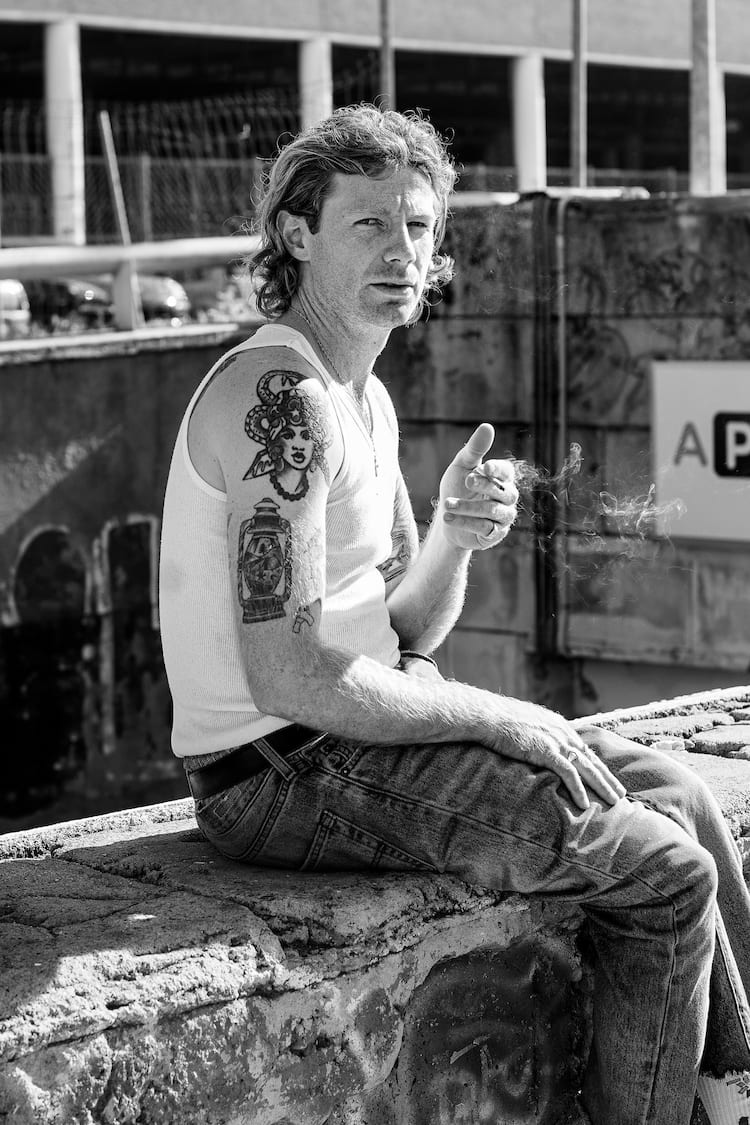 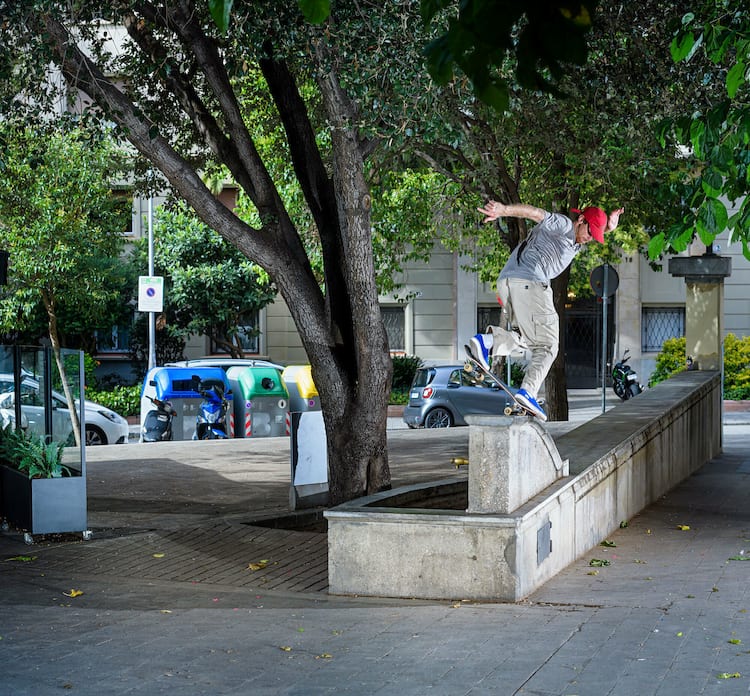 How can you keep a relaxed mental attitude and still run a successful show?
According to the business analyst in me, Sour Solution is a modern-day company where the chain of command and the pyramid of hierarchy is turned upside down, sideways and shaken a bit to the utter confusion of everyone involved.
Yes! Sour is like a social democratic skate company where nothing and everything works, and everyone yet no one has a say—least of which is Bjorn. 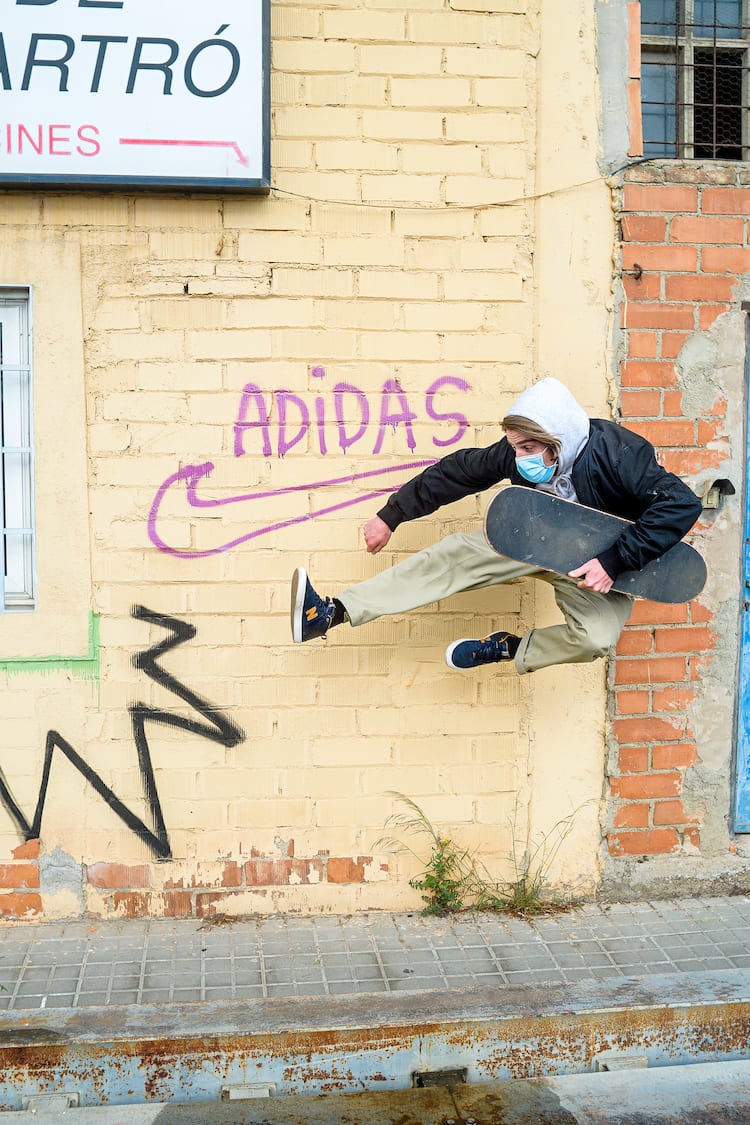 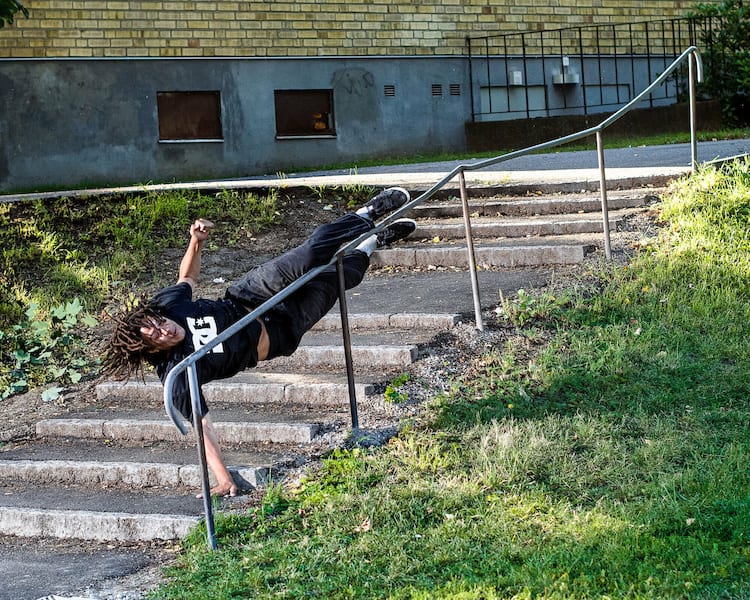 I ask Tyler Surrey how he would describe Sour. A day later I get a message:
“The Sour team is every aspect of a perfect storm—from the calm
in the eye to the chaos and confusion it generates.”
I then ask Oscar Candon, the prince of France, how he sees Sour.
He sends me a picture of a shipwreck on a sandy beach.
Sour, a vessel drifting aimlessly at the sea. But so far the drift had been kind. And the accidental genius sometimes happens. 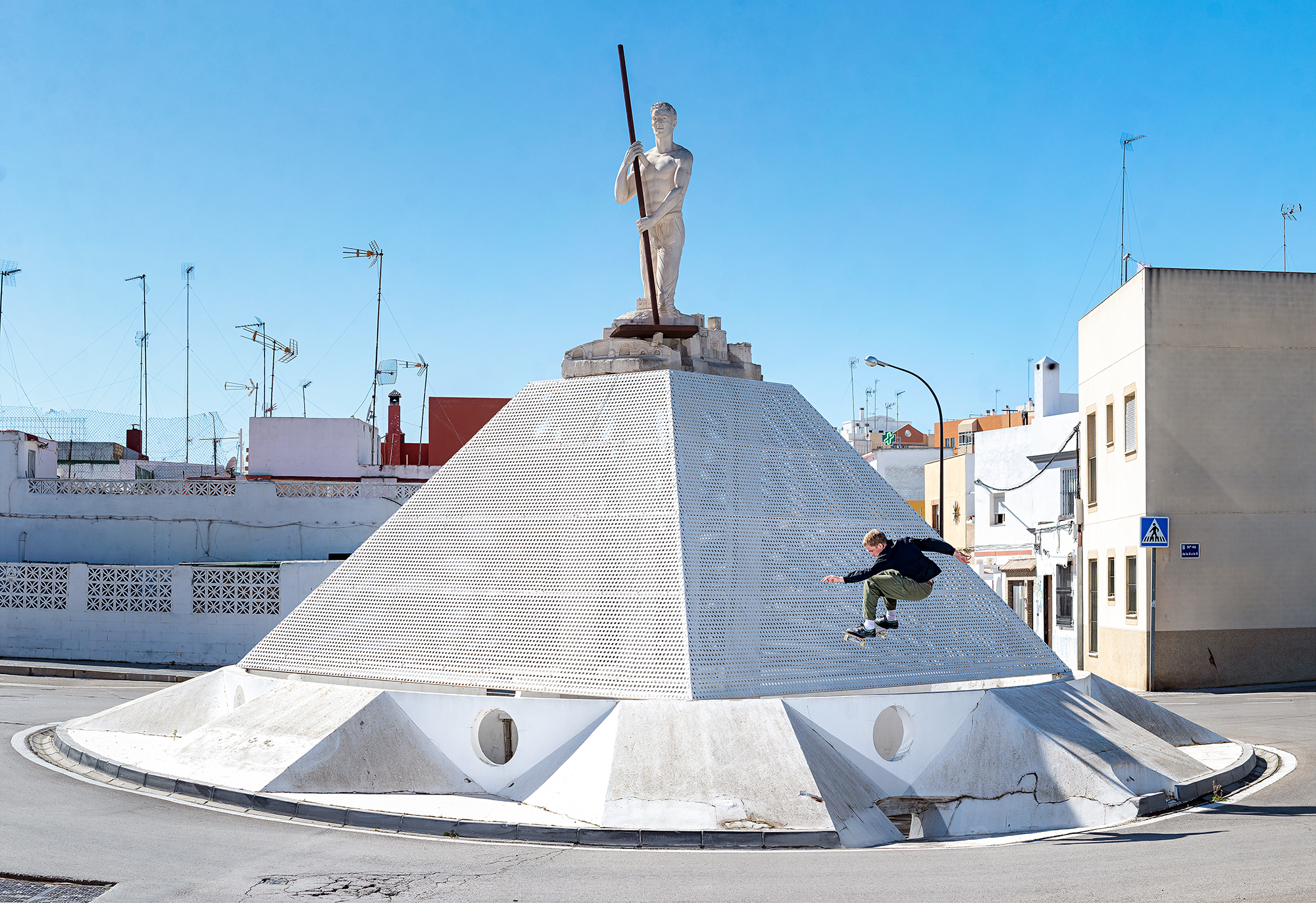 And here they are—some slightly damaged, overweight, over fried, but loving it and hyped and grounded as ever.
Or maybe they are just insane? 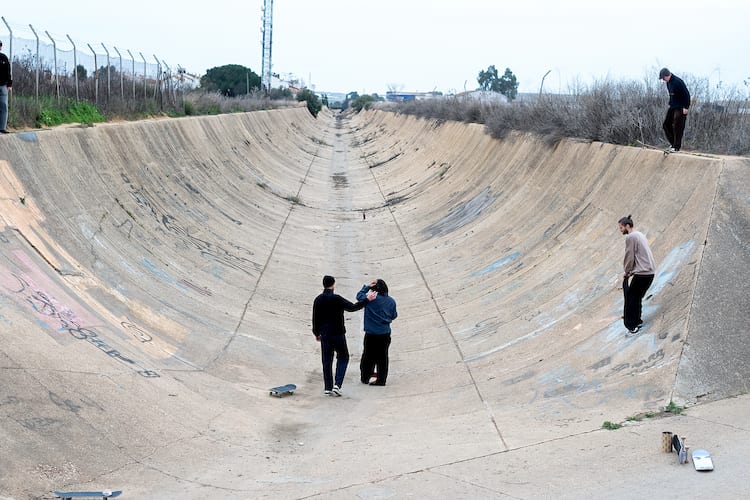 Snape had a close call following up an appendicitis misdiagnosis and ended up in ER, which just added to his massive list of injuries and accidents along the way: broken hand whilst being robbed and fighting back, stepping on a rusty nail while rope pulling in the dark without shoes. The man is a walking trouble magnet.

And back to Tyler: How would you compare these European idiots to a USA modus operandi?
Of course the European modus operandi is different. In Europe, the cities are generally more concentrated and the architecture more abstract, so you cover less ground and look at everything more scrupulously. It’s not easy to come up with new spots and ideas in a small-ish city like Barcelona that has been finely combed by thousands of skaters for over 20 years. Yet the Sour guys are really good at pulling it off. The saying “one man’s trash is another man’s treasure” comes to mind when thinking about the Sour team’s approach to skateboarding. The way they adapt to spots and make them look on camera is unique. I’m talking about things you might not even register as a spot at first glance. And at the same time you have classic, stylish skaters like Snape and raw, gnarly skaters like Josef. I guess what I’m trying to say is they satiate the full palate of skateboarding, regardless of what your taste is as an observer.

Yet I can’t help but ask myself: How many Sour riders does it take to make one functioning brain? It’s a true renaissance team.

Nisse emergences with a guitar and blazes out, “Light as a feather, covered in leather,”—yet another Sour classic.
Everyone joins in.
Vincent arrives tonight.
Smoke fills the air.
Gimme a cold one.
Amen. 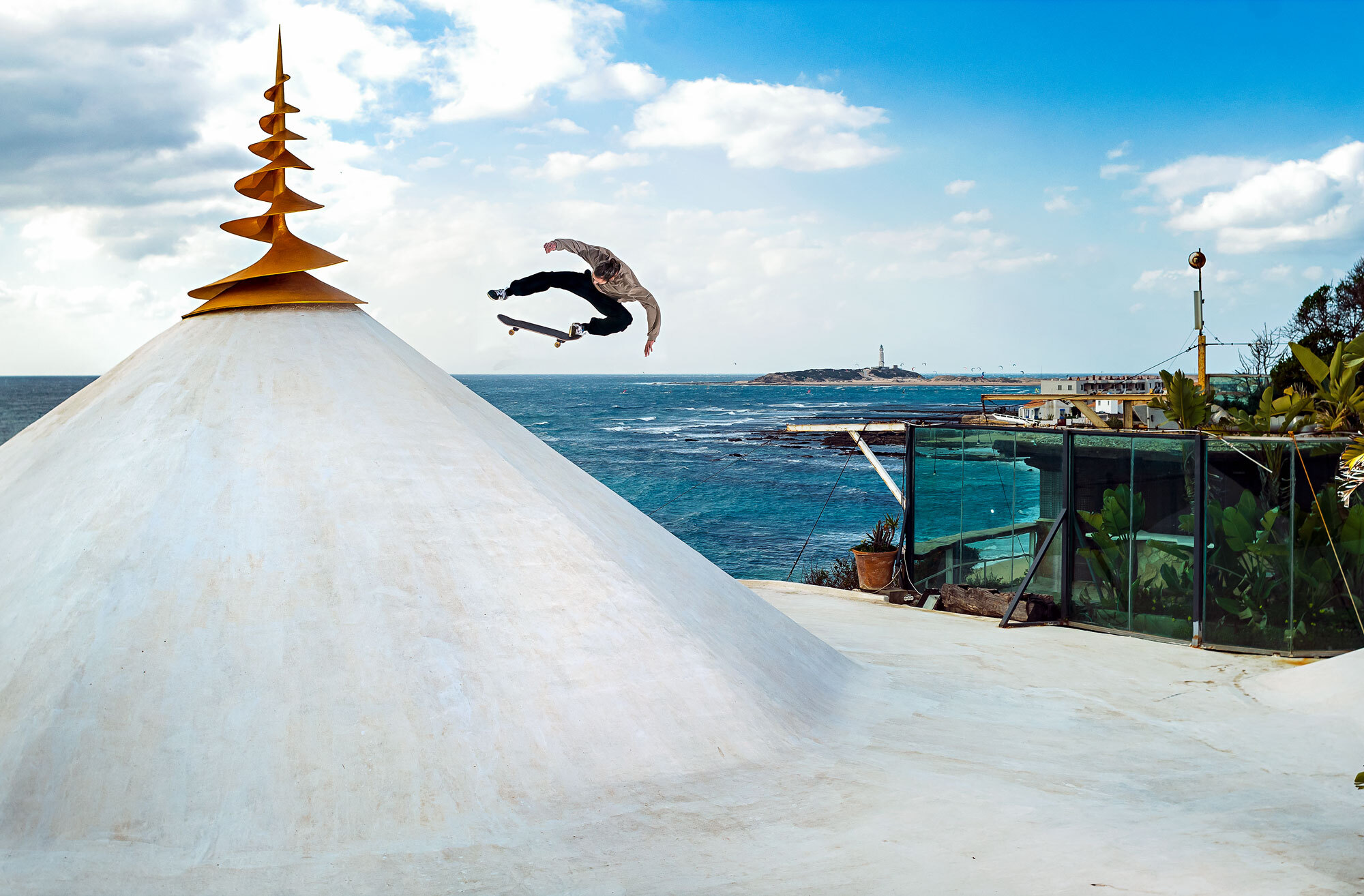