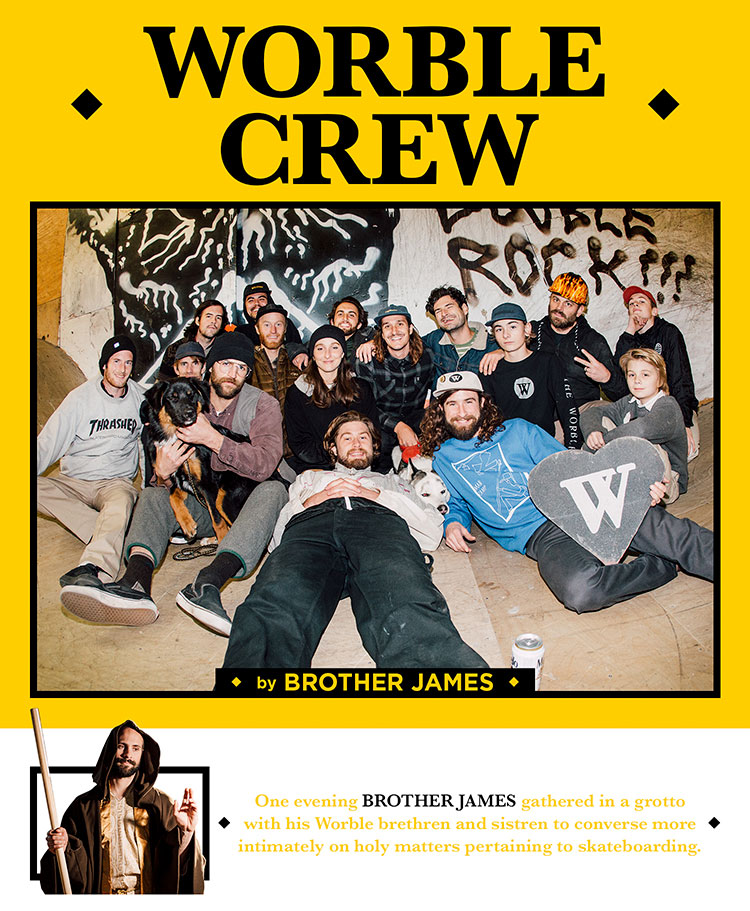 Brother Steve, until recently you were flow for a cult called Welcome. What was it like to receive relics from an occult realm? Did they impart any powers?
Steve Mull: Ha! Yes, I skated their sticks for a few years and loved it. They put a lot of care into each board, and you can feel that under your feet. As far as powers go, I learned how to make it three years without paying for a skateboard. Is that a power? Thanks, Jason, Shane and Richie. 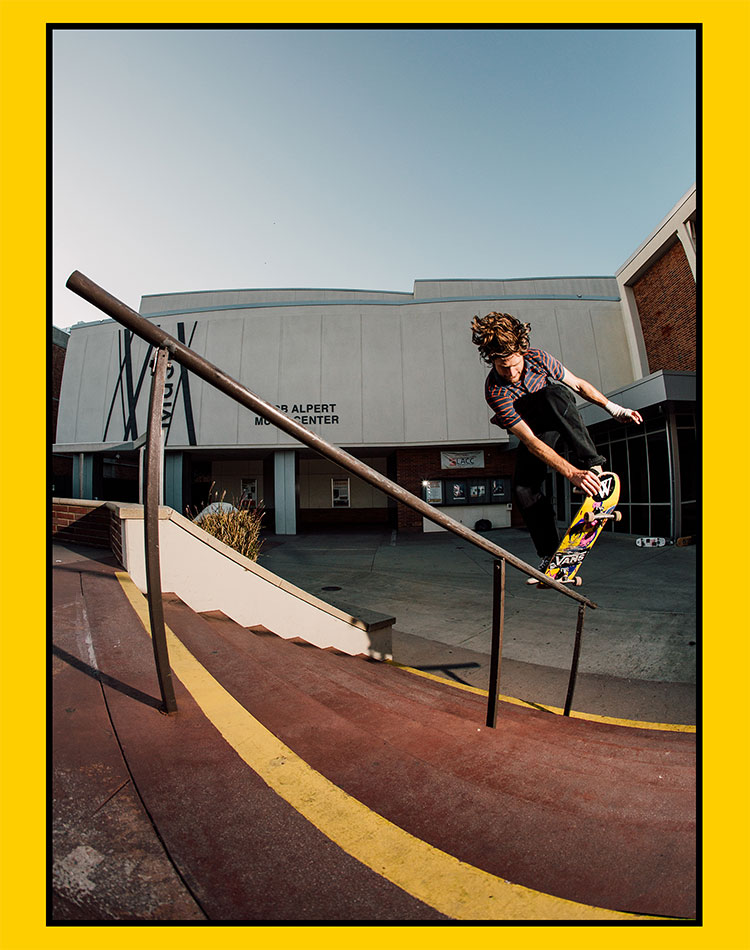 The way is long and narrow, unless you find your own. Steve Mull, backside 180 to fakie 5-0 crail     Photo: Zorah Olivia

But now it seems your crew is being called to be fishers of men (and women). The Worble is making skateboards. Will these boards catch many fish? And by fish, I mean heathens swimming in a saturated board market of, like, 50 brands. (And by swimming, I mean shopping.)
S: You said it! We’re making boards. We’re taking the plunge. We’re quitting our sponsors and sponsoring ourselves. Except Cookie—we haven’t stolen him from Element yet. It’s exciting; it’s fun; it’s terrifying. There are a ton of brands out there but damnit this just feels right and we can’t ignore that. Skateboarding has given us so much and it’s time to give back. A few people in the industry have told us participation is low and that it’s an oversaturated market. Anyone sensible wouldn’t jump into a pond like that. But honestly the feedback we hear all the time is, “your videos got me back into skating” or, “I don’t skate but your videos make we want to learn.” So yes, I think we have a few more fish to convert. 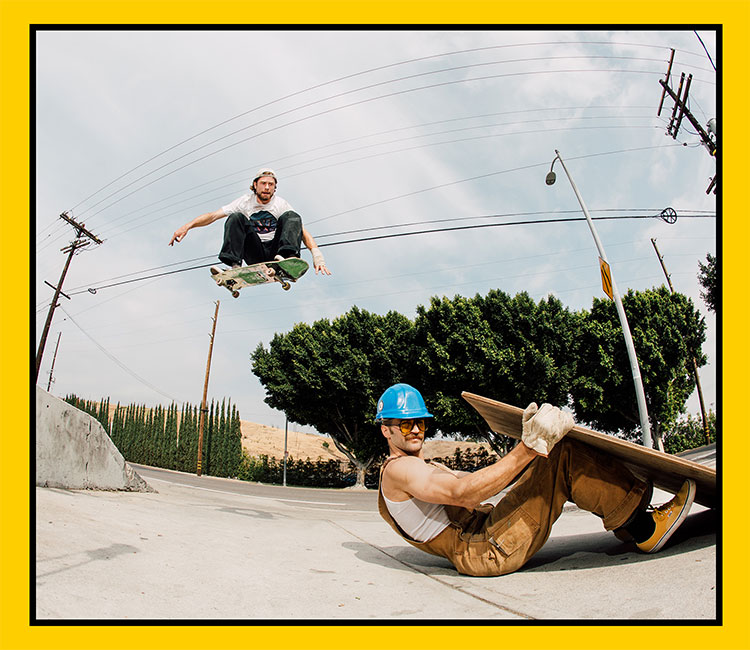 Do you fear the wrath of those that say starting another board brand is polluting the temple of skateboarding?
S: For sure! But honestly I think it’s just a natural phase of the market. There are some rad board brands out there, but equally as many boring brands. People are ready for what’s next. Brands will pop up left and right but when the dust settles skateboarding will have what it needs. The temple will get what it deserves.

Brother Bert, thy board has seven layers. So does hell. It seems you have been through some of these layers. Do you have a favorite layer?
Alex “Bert” Farrara: Yes, actually. My favorite layer is just after the ice cream and just before the cake. 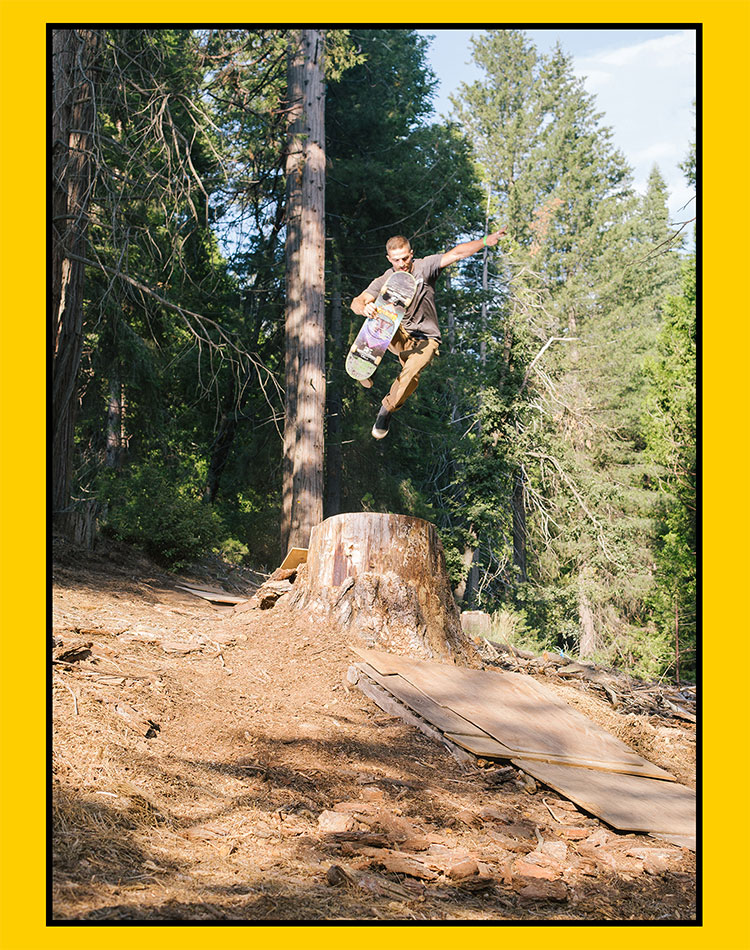 If Bert bonelessed in the woods and nobody saw it, did he land it? Yes, but only after a few slams     Photo: Remy

Hell sounds a lot like heaven. Anyhow, who is the Devil Dog and what sins has he committed?
A: Oh, the Devil Dog? That’s Frank. He was born biting his way outta the womb. He’ll draw in his helpless victims by his good looks and chocolates and then he’ll pounce on them when they least expect it. Quite the sight.

Brother Cookie, I hear that you are a doer of the Dew. I too drink dew daily from the high mountain meadows. You won something called Am Street at Dew Tour Long Beach this summer. Tell me, how do you do such long and original runs?
Chris “Cookie” Colbourn: One trick tends to lead to another no matter what, so when contests come into play I try to forget about everything else and just skate. It’s important to have fun or at least make an effort to, because I’m sure whoever’s judging is tired of seeing the same back to back runs of am shuffles. It was a great feeling to win a contest put on by Mountain Dew, having been sponsored by Dew for almost ten years, and to simply have fun on my board for a minute.
 

Are your runs planned?
C: I try and plan out the first three tricks to get the special meter up, then anything after that will hopefully come naturally. 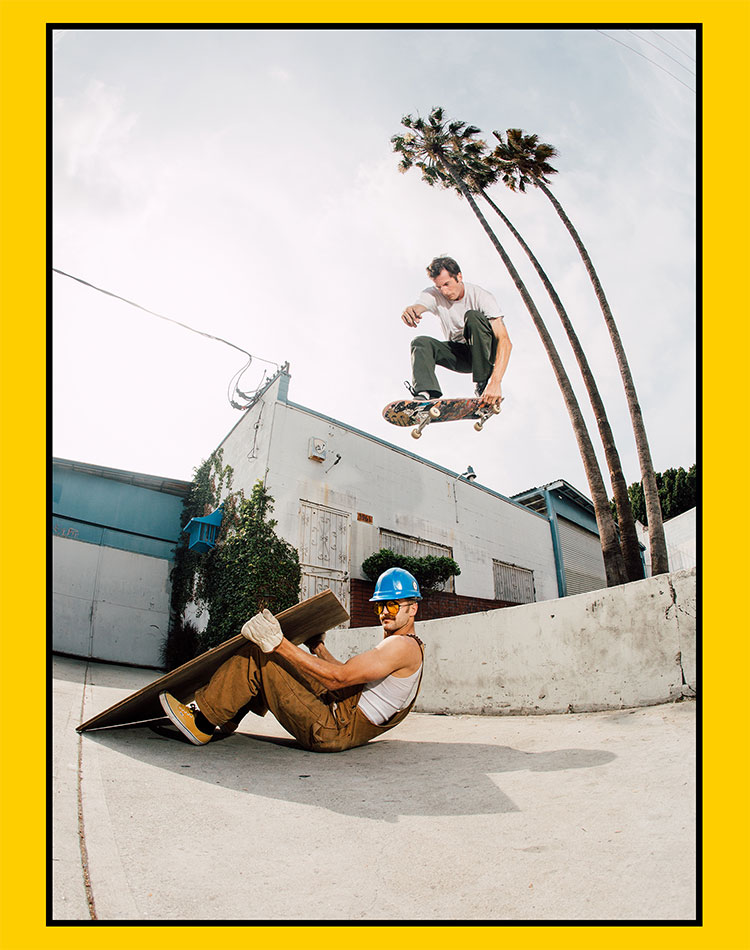 Brother Manramp, you are a man of the people and have made it your life’s work to lift up in praise your fellow skateboarder. That takes strength and stamina. What’s your workout routine like? Do you wear your helmet to the gym?
Manramp: I’m here for my brothers and sisters so I have to be in somewhat decent ramp shape, ya know? I don’t quite do the gym thing. I’m sure I’d get a lot of strange looks working on my functional plywood strength, so I like to keep the exercises in my backyard—the ol’ stomping ground. That’s also where Steve and I practice our dance moves. He’s damn good at dancing, tell ya what. Especially at BBQs. 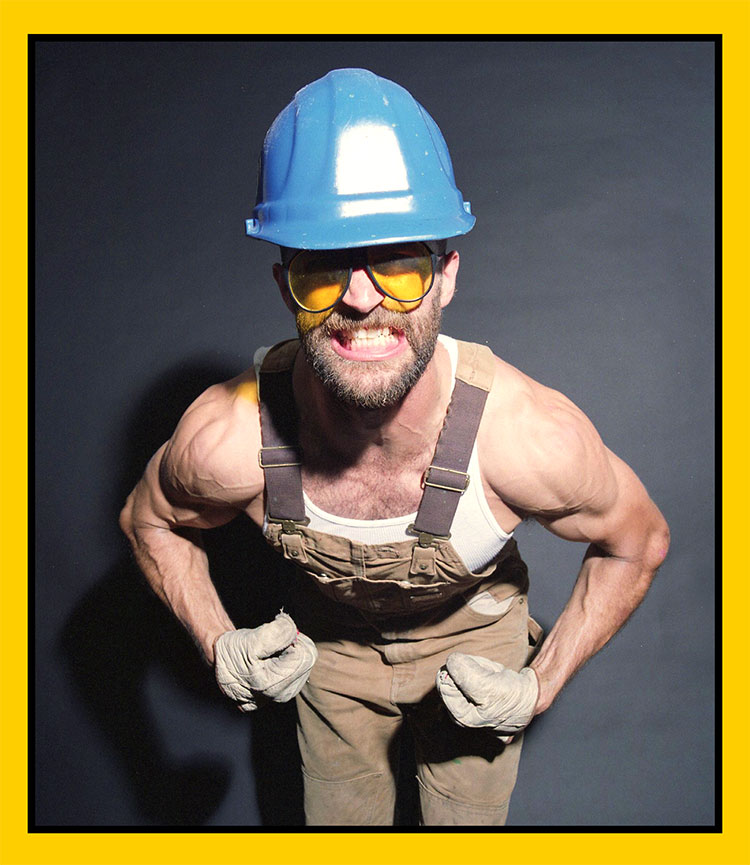 Manramp plans to start his own gym that consists solely of ramps     Photo: Zorah Olivia

What do you ponder while beneath your ramp?
M: I guess I’d compare it to those yoga people, the way they stretch and hold poses and whatnot. That’s where they’re most at peace. So yeah, being under the ramp is pretty meditative for me. 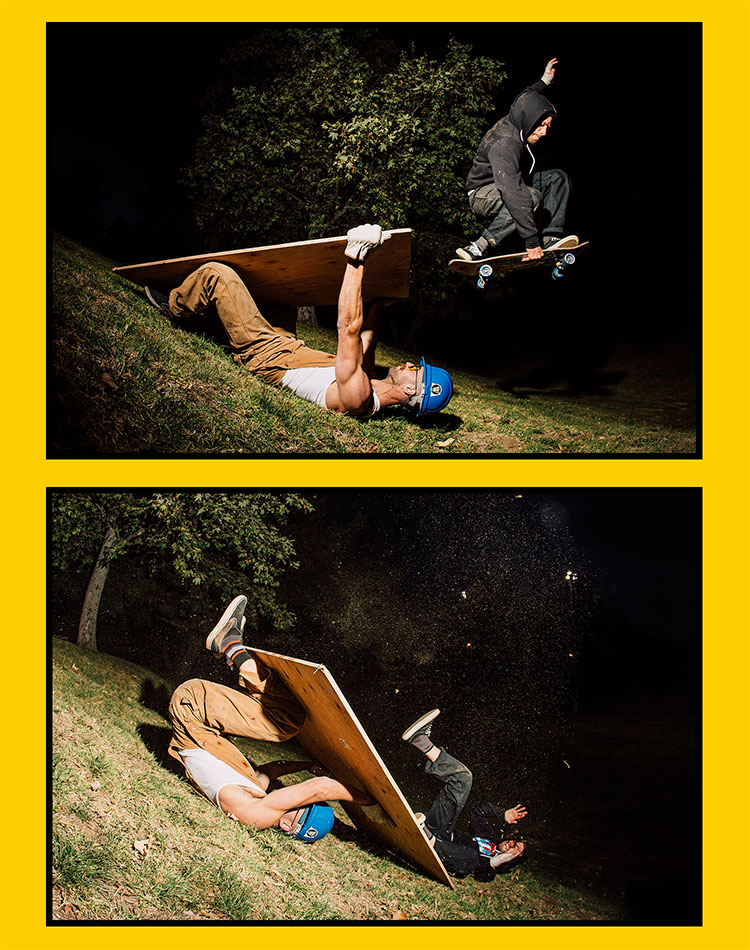 Sister Zorah, you make blind beggars see with your photography. Pray, tell me, what first drew you to taking pictures?
Zorah Olivia: Both of my parents were photographers! When I look back on my childhood, there always seemed to be a camera in sight and I remember having one around my neck at all times—the rest is history. Skateboarding and photography are my greatest passions. I couldn't be more thankful to be able to combine the two and I'm especially thankful that my photography led me to the light of The Worble. I hope to see you come back down the mountain one day soon! 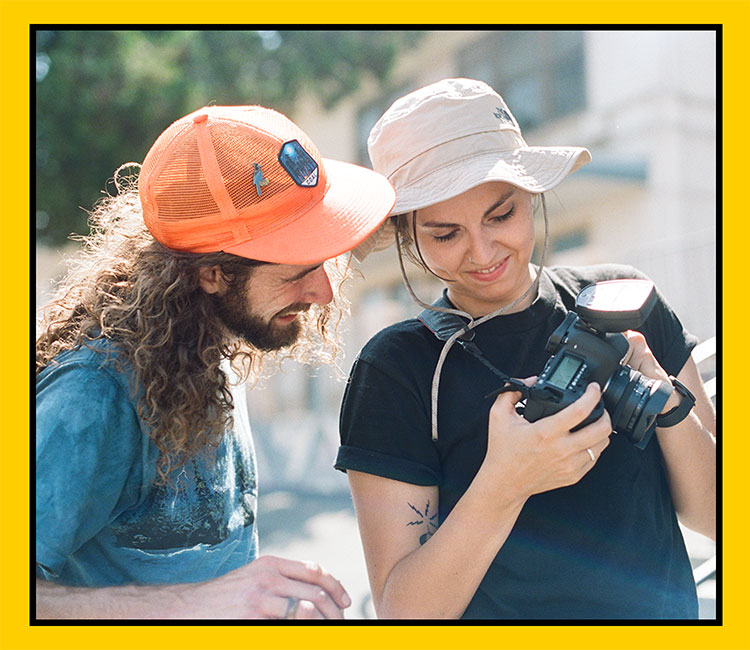 Brother Dave, it seems like you like birds. What bird calls do you have on lock?
Dave Mull: The calls of the Common Loon shake me to my bones. I hear them in my head while trying scarier tricks. Familiar southwestern bird calls for me are Bushtits, California Scrub Jays, Red-tailed and Red-shouldered Hawks—there are tons. Sometimes all I need to commit to a trick is hearing a familiar bird call just before trying it. 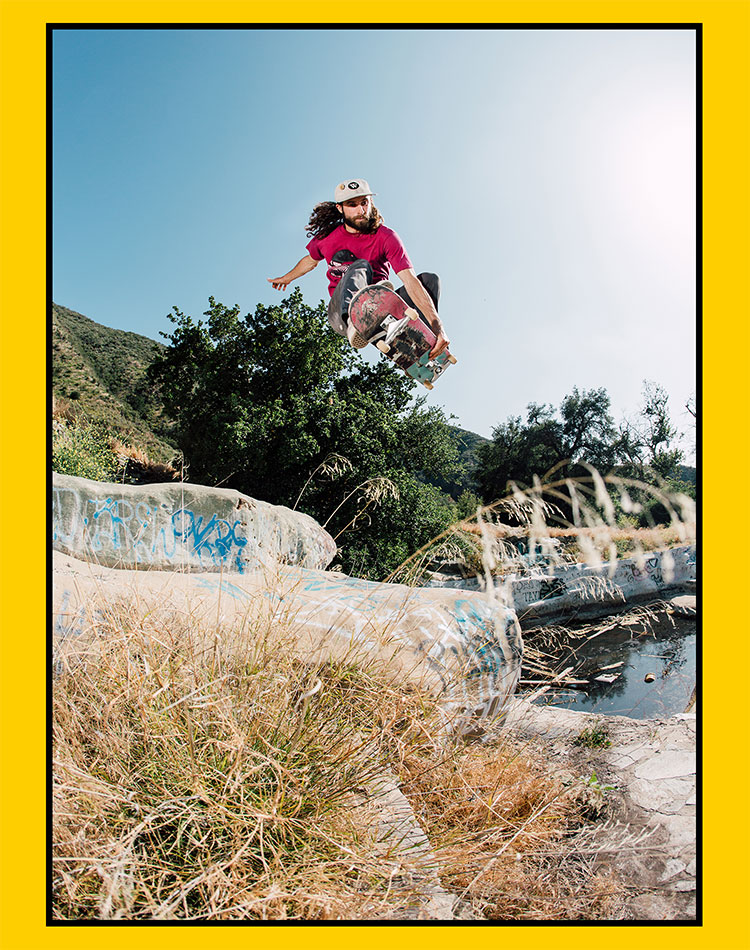 The sidewalk has cracks in it. So do we. What cracks have riven thy frame lately?
D: There’s a 16-stair rail near Franklin High in Highland Park. I bailed on a lipslide, slammed and my finger went into a sidewalk crack. Got some stitches in my finger but my shoulder was the worst part. Tore a ligament that put me out of work for a month—I’m broke.

Broke in the wallet and broke in the body, but not in the soul, Brother Dave.

The sidewalk has cracks in it. So does Dave’s finger     Video: Tom Mull

Brother Tom, you have shown me that the kingdom resides within thy board. How will you maintain this kingdom when I am gone? What more will The Worble do?
Tom Mull: The Worble will go wherever the wind takes it. Sorry, trying to come up with an answer as poetic as the question. We have a couple projects planned out, but honestly, half of the work is being patient, waiting for opportunities and ideas to arise. I’d like everything to be as organic and as fun is possible. That’s the reason we all started doing this stuff in the first place. But yeah, I’m particularly excited about a ridiculous Manramp project. Just started shooting, so y’all are gonna have to be patient with this one.

And also with you. 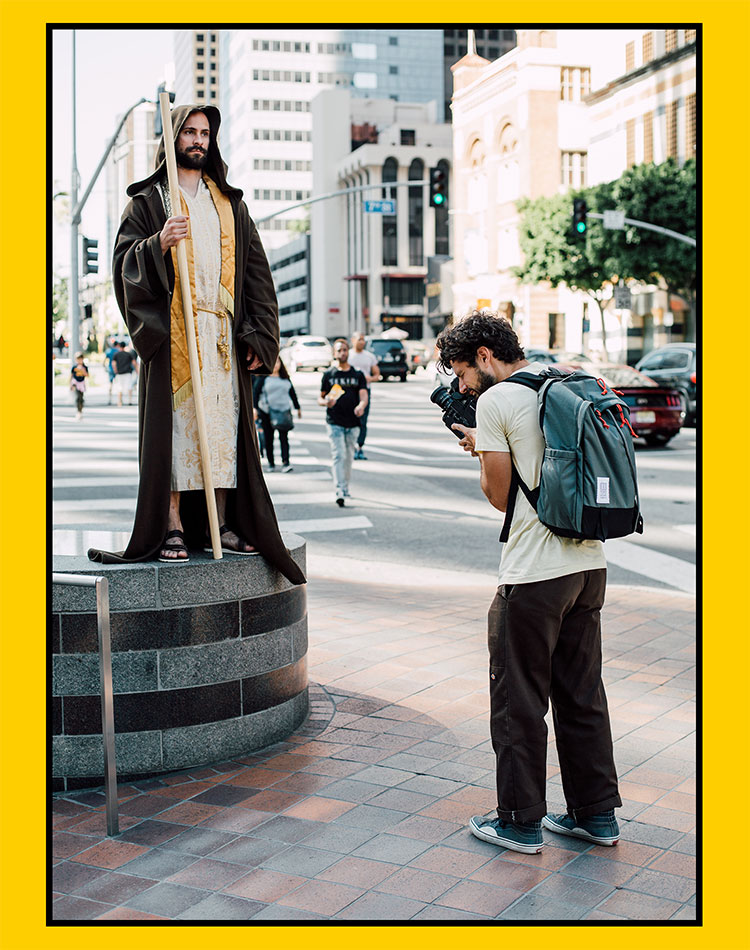