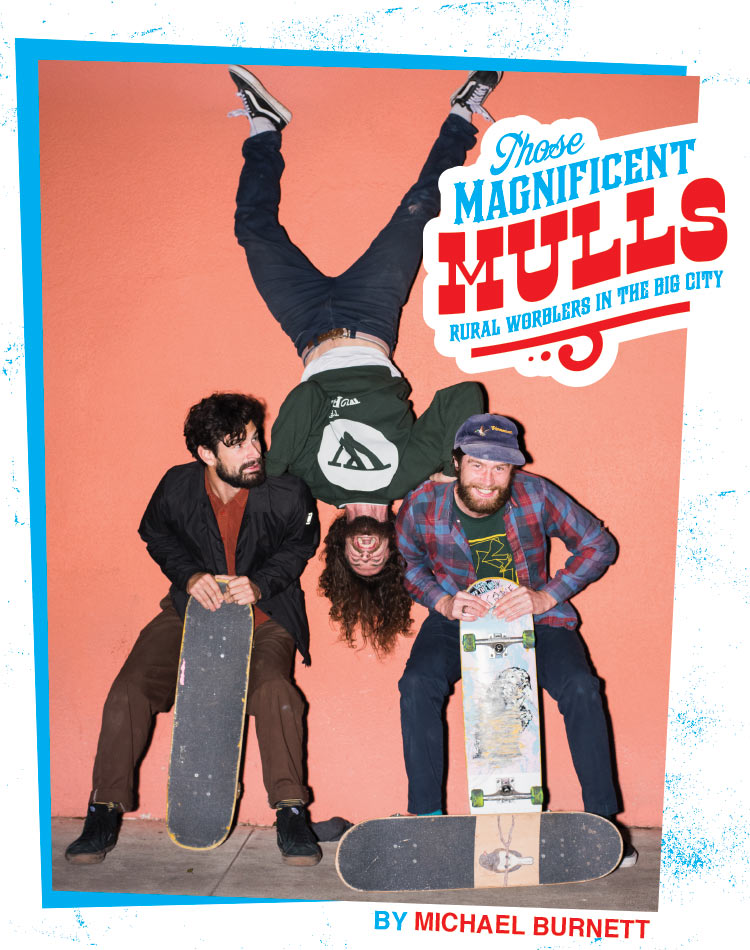 When Dave Mull was a child, his family were resigned to the fact that he would probably spend his life in jail. “I was a pretty violent kid,” Dave, now 28, admits.

“We had this deck ten feet off the ground,” youngest brother Steve explains, “and I was lounging on the railing, laying down on it and Dave opens the door and comes out and pushes me off the side. I fell off and landed on my back on a rock! All of our best memories involve Dave hurting us or inflicting pain. But yeah, he takes the anger out on skateboarding these days.”

Of Vermont’s Mull brothers, Dave may be the one you’ve heard of, or at least seen his stuntwork. Remember that third-story drop-in boardslide down the mountainous metal-capped hubba? Yep, Dave was the longhair piloting that foolhardy mission. And while jumping out of trees and off of roofs might be keeping him out of the pokey, it’s Steve who the brothers say is the true crash-test dummy of the family. Or more like the guinea pig (as his NBD no-comply flash ‘n’ roll in this article will attest). 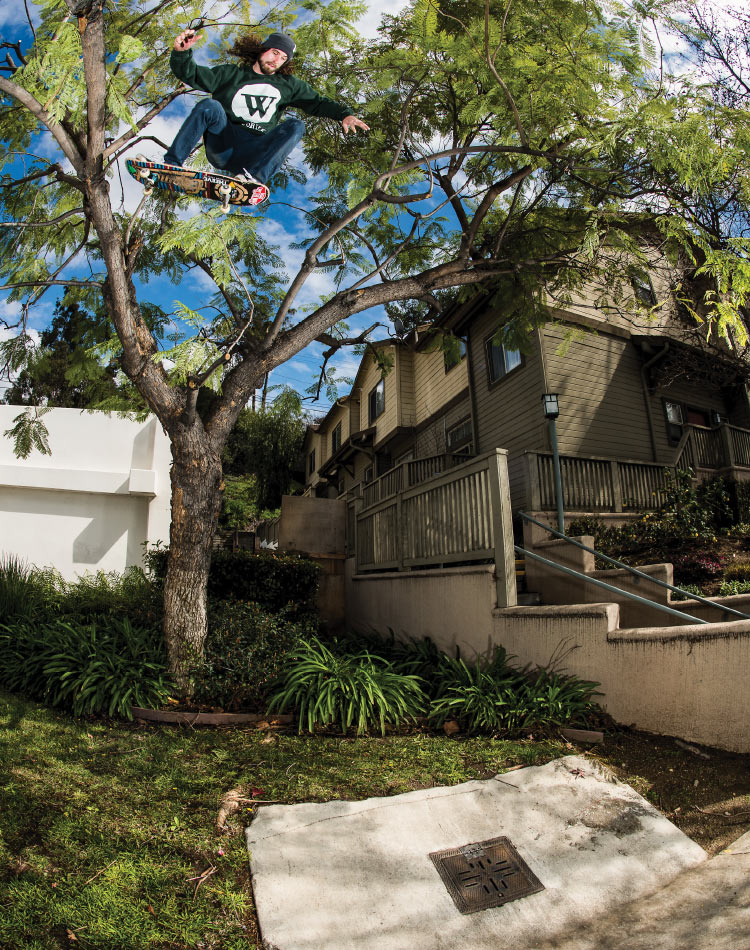 “If there’s something that no one else really wants to do they usually give the job to me,” says Steve, 25. “I always end up skating some weird spot with a bunch of plywood or a tree rail or whatever. I’m usually the first one to try it but the last one to land it.”

And it was Steve who first got the brothers off of their BMX bikes and rollerblades (which they often wore on one foot only, having only two pairs between them), and onto skateboards full time.

“We basically discovered this old 80’s board, like, no concave or anything, in our garage,” says Tom, 26. “It belonged to Charlie our oldest brother and Dave and I were just messing around with it. We had heard rumors of how to ollie and I remember Dave saying something like, ‘If I could just get this off the ground I’m never gonna stop!’”

But why should anyone care? Doesn’t everyone have childhood stories like these? Well, because unlike most kids who get sparked by skating, the Mull brothers didn’t stop. Further, they’ve made their rural skating roots into a mission—part Thoreau-inspired environmental transcendentalism, part skate and destroy even if you gotta skate a rock—with a beefy friend named Manramp thrown in for good measure. Under the name The Worble, Tom has been capturing, carousing and creating video magic with Steve, Dave and friends for several years, not just for the sake of wackiness, but to explore new kinds of radical, the type of which pokes at the rules of stair-counting and acceptable terrain. 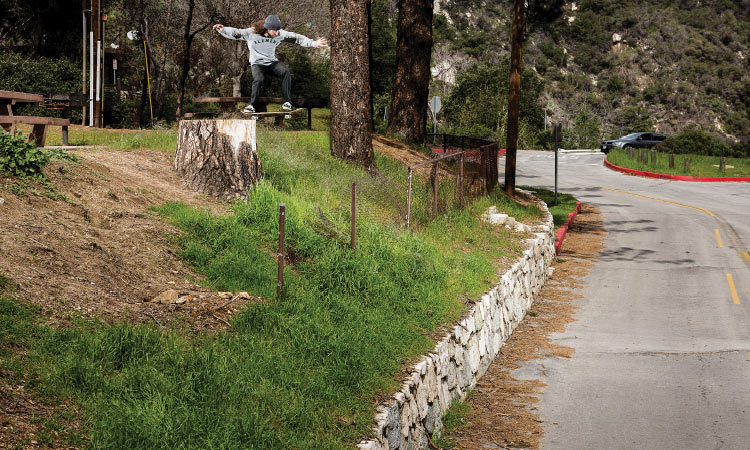 Out of spots? You can’t stump the Mulls. Dave skips and drops across old growth     Photo: Bleckley

“The first video that really inspired us was Welcome to Hell,” says Steve. “We watched it, like, every other day; just obsessed with it. Jamie Thomas was all of our favorite skater. But at the same time when you grow up in a small rural community you learn to work with what you have and it just wasn’t so realistic to be doing the biggest rails around. I mean, Dave will find the biggest drops around, jumping out of trees and whatnot, but yeah, I think skating what we skate was something that just sort of developed naturally.”

Leaves, ice, rocks, propped-up plywood and dirt were some favored Mull terrain and they split their time between skating and exploring the woods behind their house. Their love of backwoods ‘boardin’ eventually resulted in the Worble’s excellent Surfaces video series and their desire to keep things interesting prompted a recent move west.

“LA was kind of the next thing,” says Tom. “Even though we love Vermont it was like, ‘Alright, rural skateboarding is underrepresented so we can move somewhere where we can meet the right type of people who support us and collaborate.’ The philosophy we’ve adopted in Vermont is in effect in LA.” 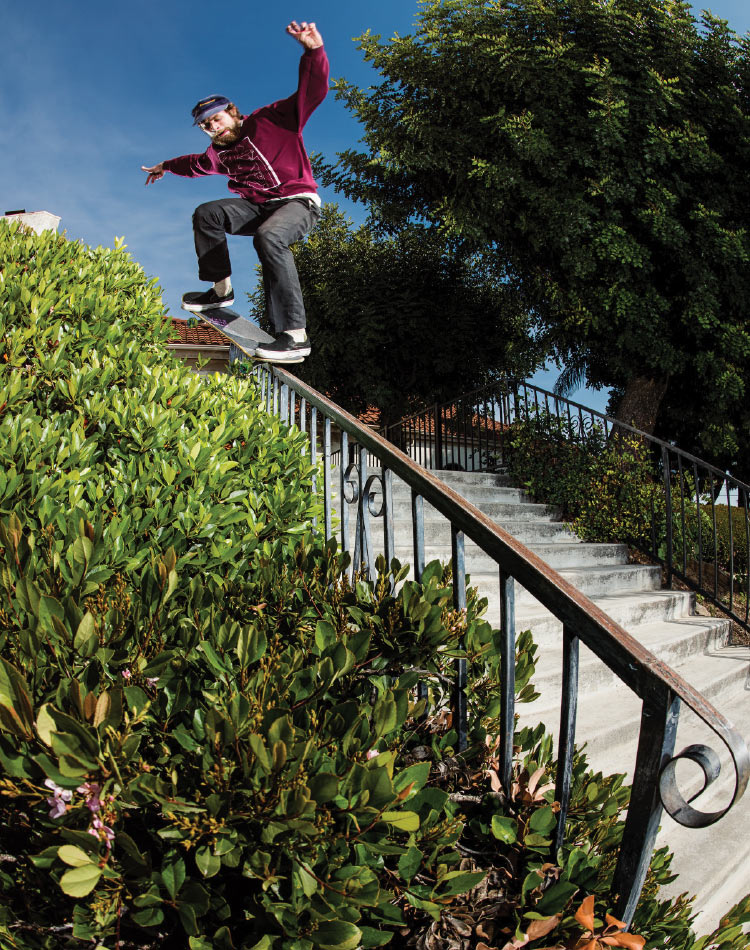 “You’re skating across private property,” Steve explains. “You’re traveling somewhat wildly through the landscape just because it appeals to you, you know? There are rules and we try to kind of blur out rules and laws and privately owned borders and all that stuff that kind of limits you as a person, as a human, as an animal.”

In addition to making amazing and often hilarious videos, the Mulls work with the Elemental Awareness non-profit, teaching underprivileged kids survival skills and doing demos at Indian reservations. But it’s the videos at the heart of the Worble and their move to LA comes during a zeitgeist moment for non-traditional skate videos.

“Pyramid Country, WKND, Welcome, Fancy Lad, they’re all pretty big influences and kindred spirits,” says Steve. “Pyramid Country, like, we’ve always really dug their work and recently they came and crashed at our place when they did a trip to LA. We’re fortunate enough to have a small house and we crammed 15 of those dudes on our living room floor and that was awesome because you could just see that these guys wanted to do the same thing that we want to do so it was amazing to do it together! And then they clogged our toilet.”

Ride Manramp’s coattails? Yeah, after they demolish his spine. Move along. Nothing to see here     Photo: Bleckley

But even the Mulls acknowledge that some of the so-called “creative” skate videos miss the mark, lapsing into overt wackiness or sometimes trying too hard. “I’d say there isn’t really a fine line,” says Dave, “but somehow when that line is crossed you know it. I’m not really sure what defines that or what is actually crossing the line but I will say something about the motion of skateboarding, like, the actual movement of gracefully gliding from point A to point B is really attractive and that’s what I think brings out more natural style in a skateboarder. So if something, not to dis Rodney Mullen because he invented a lot of the best things and he’s one of my heroes, but I’d say if people are stationary too much or do too many foot plants… it’s blurry but for some reason when you see it you know it.”

“No complies can be a cliché,” Steve admits, “and part of that is just me pushing myself to see where I can take it. But it’s always hard because I feel like I am overdoing it.”

Given that he no-comply boardslid Hollywood 12, nobody can say Steve isn’t sincere in his cliché-busting ambition.

So where does a skate crew with some clever ideas and growing notoriety go from here? For the Mulls it seems loftier than a reality show or shoe collab. It might even take them back to the woods.  “We talk about where we want to end up in the future and it’s somewhere in the forest making a cabin or treehouse, connected by a pathway of skateable bridges and tree rails and anything you could imagine,” Steve says. “I just want to take that to the extreme with my friends and just build my livelihood and maybe throw a brewery in there too to make some money.”

“I don’t want to make a bunch of money but I want to make the Worble something that’s sustainable and that can take us around the world and take us on trips—a vehicle for collaboration and more videos,” Tom explains. “All of us just want to be creating things in skating. The Worble has been that force so far and we’re very grateful and stoked on that because we never had any plans for it and we still don’t exactly. But basically at this time we’re trying to ride Manramp’s coattails to the top! So we’re gonna invest everything into Manramp and see how that goes.” 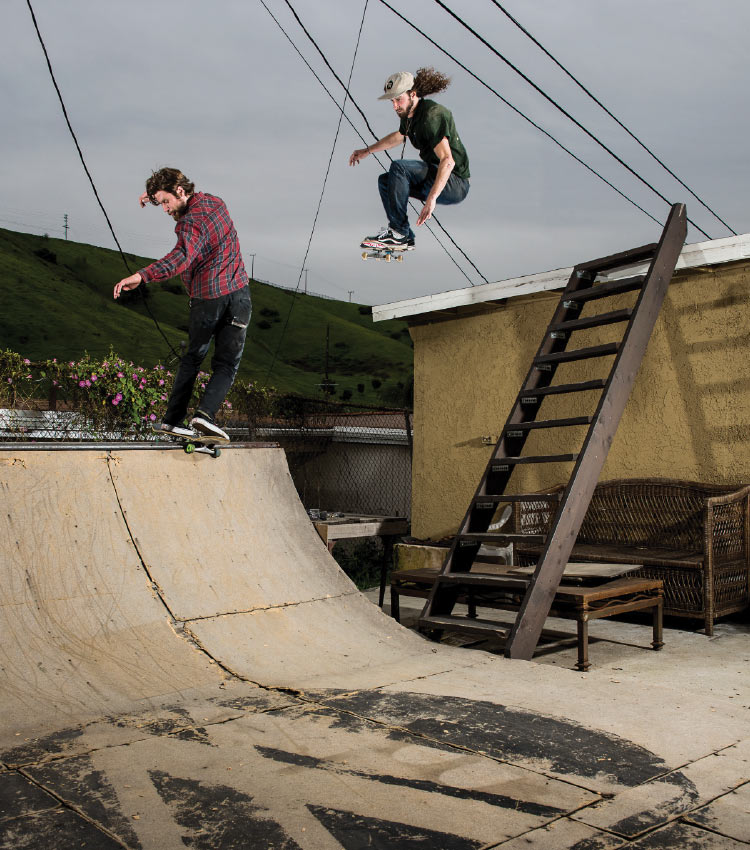 While Steve rocks gently, Dave once again comes in for the attack     Photo: Bleckley

And if that doesn’t work, they’ve always got their upcoming video New Driveway, which, once again, points back to their humble roots, shredding whatever they had. “We have a shit ton of home videos when we were kids in the driveway and we’ve been trying to collect similar home videos from everybody else, just kind of emulate the fun we’re still having,” says Tom about the video which will premier next month. “We feel like we’re still doing the same thing we were doing when we were, like, nine and ten. We’re still going out and we’re still skating with each other; we’re still doing weird things and that’s how we want to keep it. If you live with people you skate with and film with all the time and you know they’re gonna be there for the rest of your life, there’s no option to really quit.”