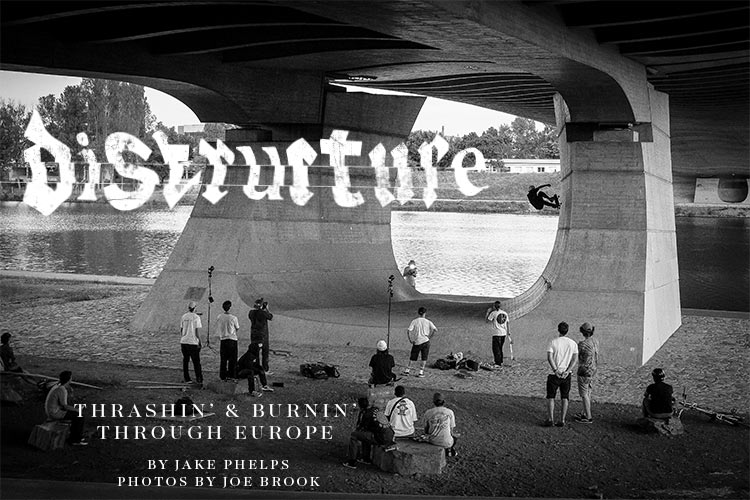 When you can slap a bottle upside some cabbies head and walk, a FSO on some rough-ass shit is a couchwalk. I mean cakewalk. Bronze

Five years ago, we did Grant’s SOTY trip in OZ. We wanted to do the same trip again, give or take a few heads. We didn’t get them all, but we got Grant and Couch, so that was a start. Everyone was excited to jump in the van and we were ready to roll. Destructors! We started in Germany, which is basically a right-wing country. Raven hit a cab driver in the head with a bottle. The cabbie called the cops. They showed up to our hostel with all of us lurked out and decided to take three SOTYs to jail. That may be the future of skateboarding. We don’t know. They came in like gangbusters and roughed up GT pretty good, but it wasn’t like he was gonna die or nothing. Daan woke up handcuffed, which is actually a pretty good name for a song. When I got up the next day and found out what happened, I said, “We gotta go get them outta fucking jail!” 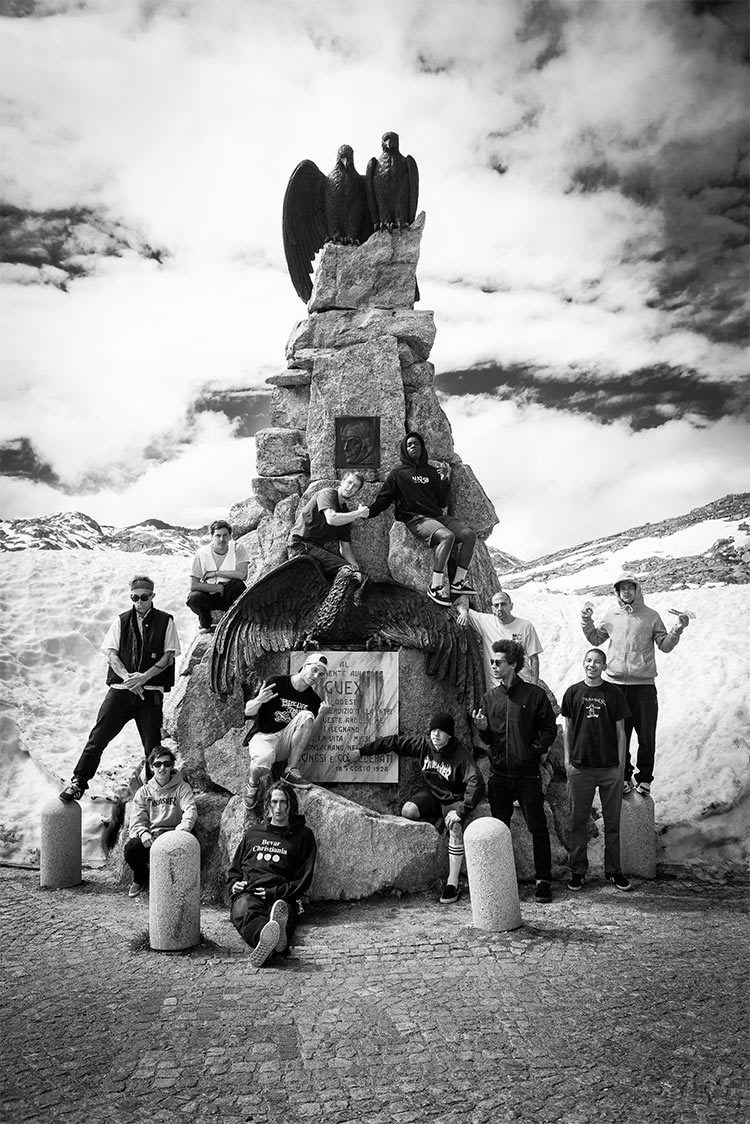 Most monuments are built to show where people made bad decisions. We are down 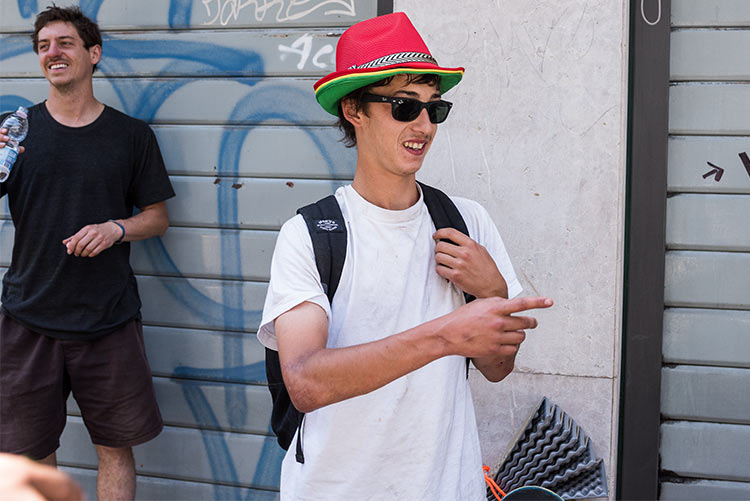 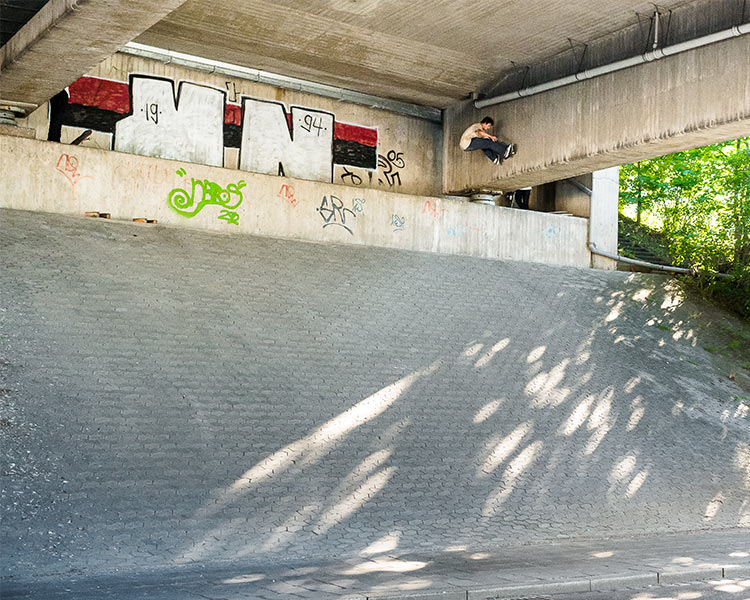 Under the bridges, under the stars, that’s where we live. DVL never backs down, off there to a stinkbug surprise. On it 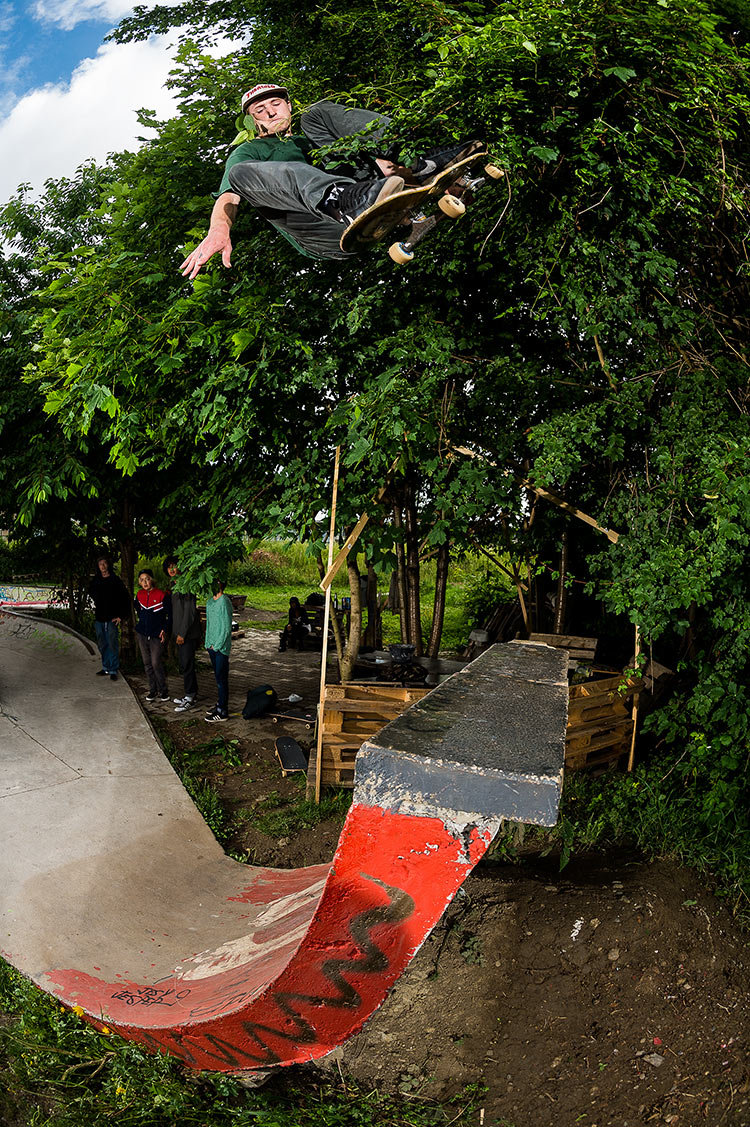 Grant’s always schralpin’ some big shit and with the right ‘thane, you up in the trees 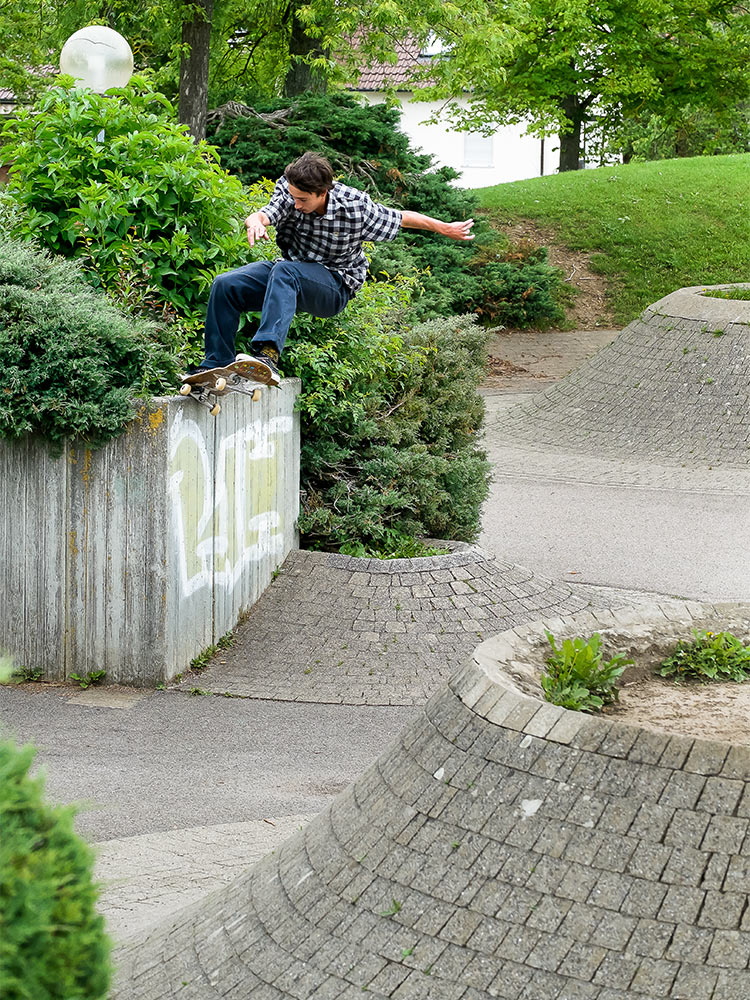 Just understand, there’s no expectations on these trips because we’re not a team and we don’t have to produce. That being said, when you get to a spot and get out of the van with 18 heads, shit’s gonna get down. You can’t put the fire out. Even if it was fucking raining, one of our guys was like “I got that,” which is why I find myself addicted to this shit and find myself in the van standing next to people who see things that don’t even exist. I’m a classically trained nowhere skater. But with the advent of more people and more tricks, shit’s going to go down. And the fact that there’s no expectations, I think that’s the most important thing that makes people understand how special these “athletes” are. We had the sickest stacked deck. I couldn’t believe it. These fucking dudes, they’re down. 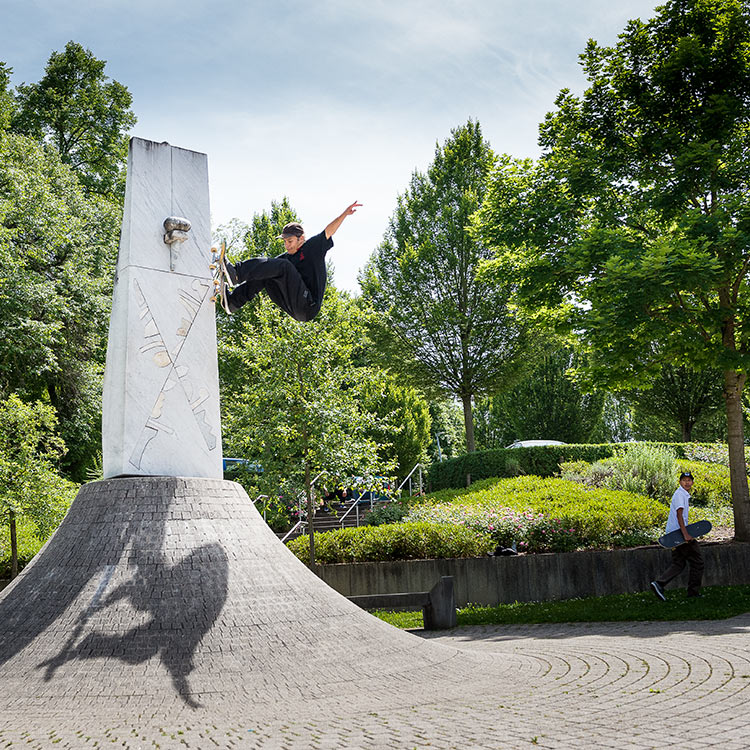 Nice person Oskie goin’ off in some bullshit town. At least he didn’t early grab it 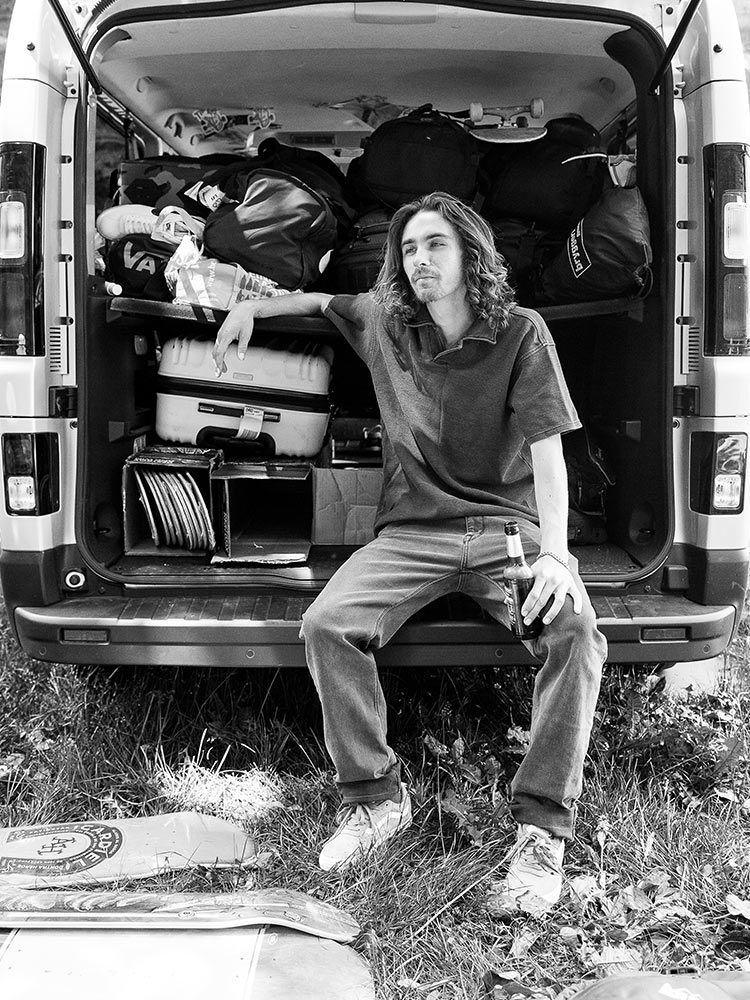 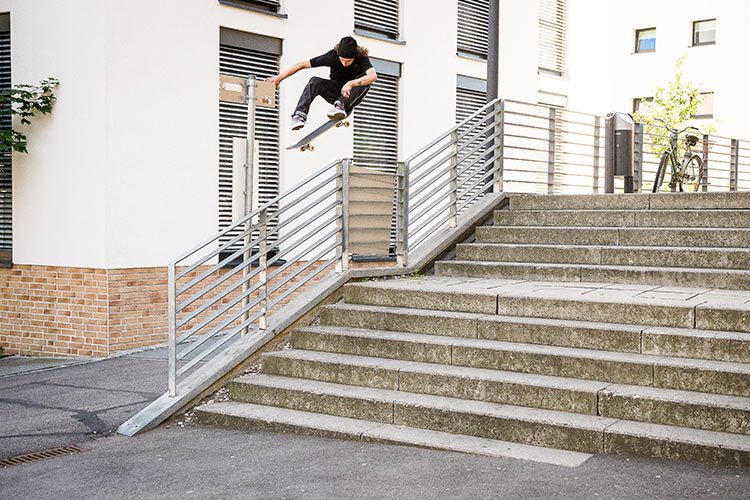 The reining SOTY, K-Walks, was putting on a show the whole time. Over the bar kickflip 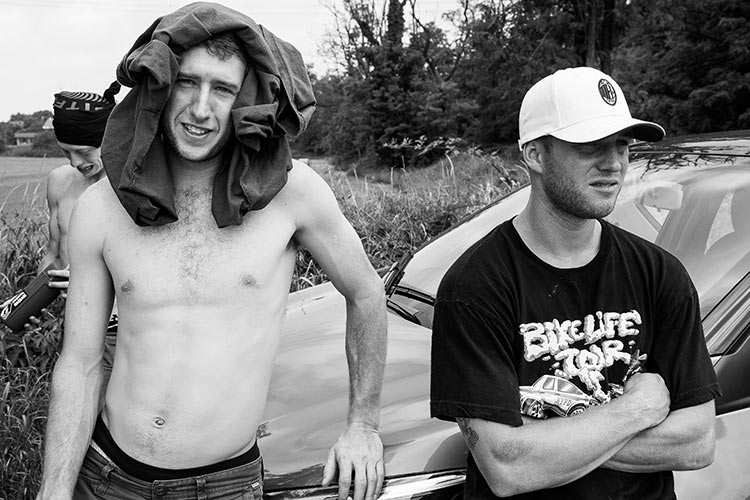 We’re waiting for the van and the next thing you know these hags show up with some boxed wine, ready to party. Frank’s always down to have some fun. Hey, we’re living out there in the cities. It got a little aggressive, but no feelings got hurt. It was a pretty epic moment on the way out of Milan.

Box wine and street dancing add up to straight ridiculousness

Zion comes up to me and says, “You want tickets?” I go, “tickets for what?” He goes, “To the gun show!” Zion Rizzle is the new leader in control. 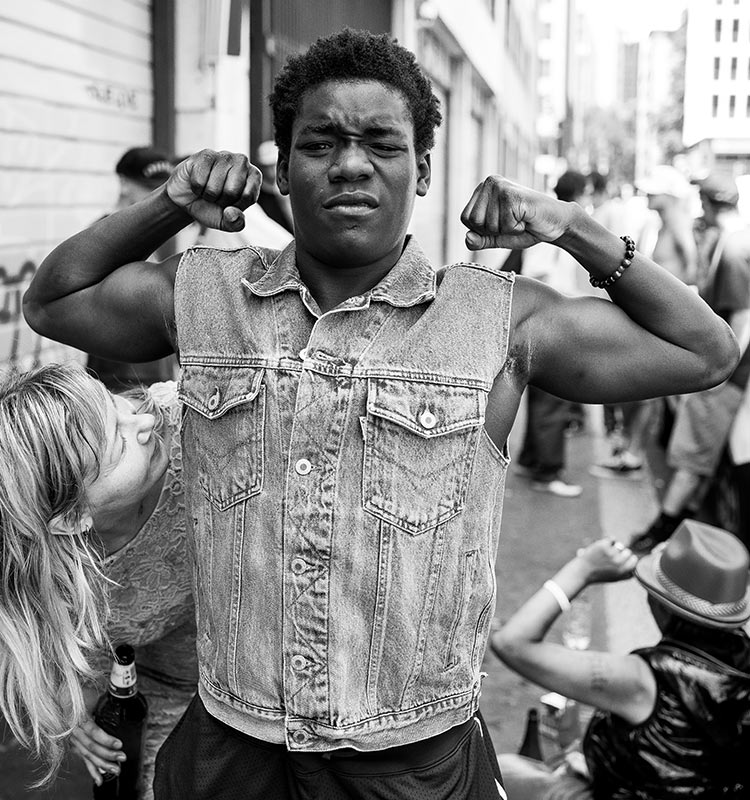 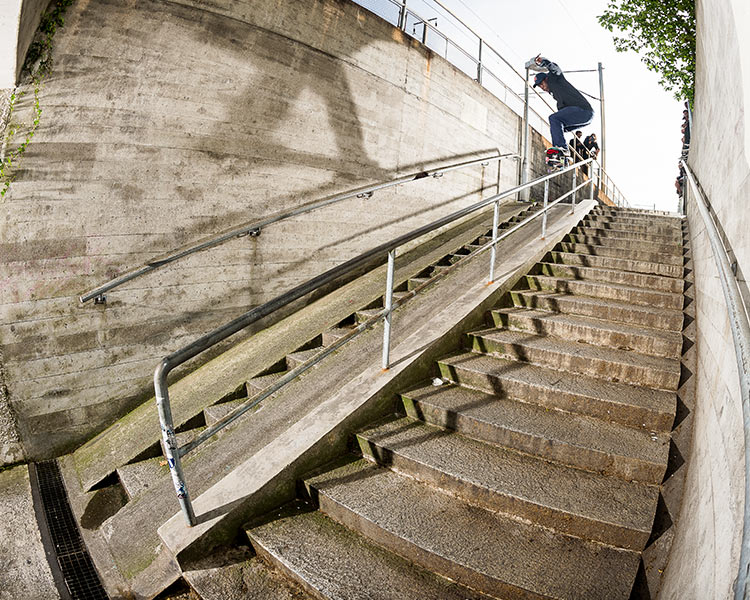 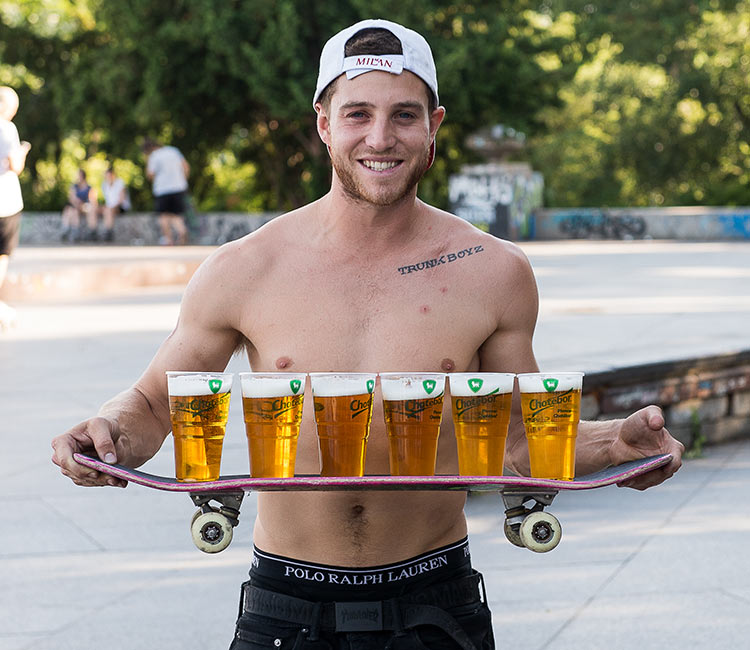 The distributors took us to this industrial wasteland and told us to have a good time, but they wouldn’t even jump the fucking fence. There was this lot lizard that had no teeth and was offering head jobs to anyone that wanted one. It was like Cops but in fucking Italy. I was, like, “I’m gonna sit outside the fucking fence. Fuck this.” It’s one of those things where there’s no flatbottom, so you either have your shit or don’t even fucking go in there. But Raven’s, like, “Ah—alright. You know, I’ll step up. Should I?” Yeah, pretty much. We were walking through trees and fucking pricker bushes with thorns in my fucking legs. Yeah, we went out there and I was, like, “Yeah, this isn’t a Phelper spot. I don’t think I can hit this right here.” 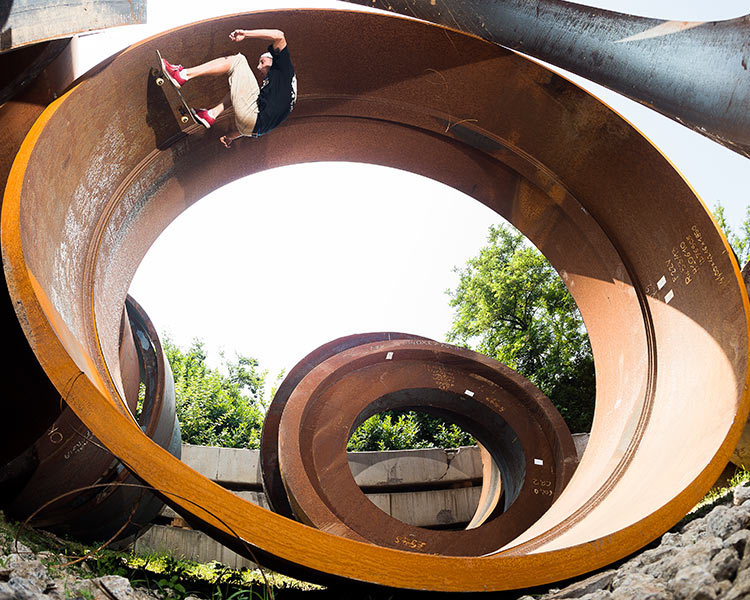 Industrial wasteland? Yeah, that’s where skating is real. Couch FSO all up in the upper quad 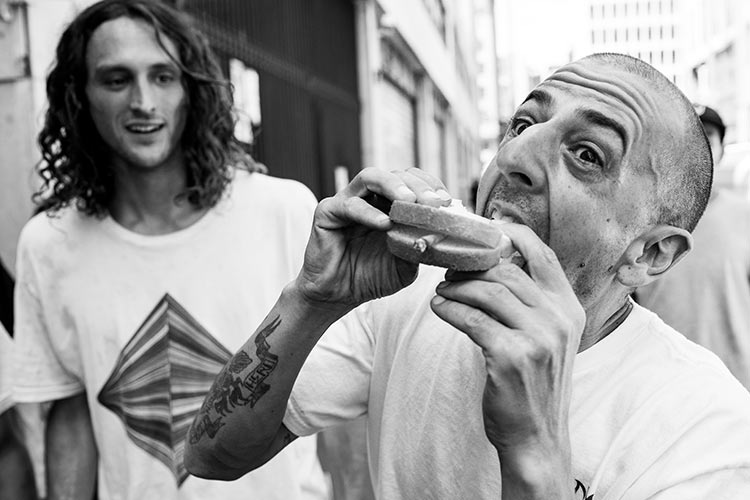 We saw this double set. It was big to begin with. You could ollie it or kickflip it, but to land on the second rail was some 1995 Chris Senn shit from the fuckin’ Acme video. But DVL, he looks kinda like Lizzie Armanto but with a little mustache, but he’s a little kid and he can fucking fly, trust me. That’s gnarly. It wasn’t just a nosegrind, it was like a crooked grind on the side. He handled that shit. 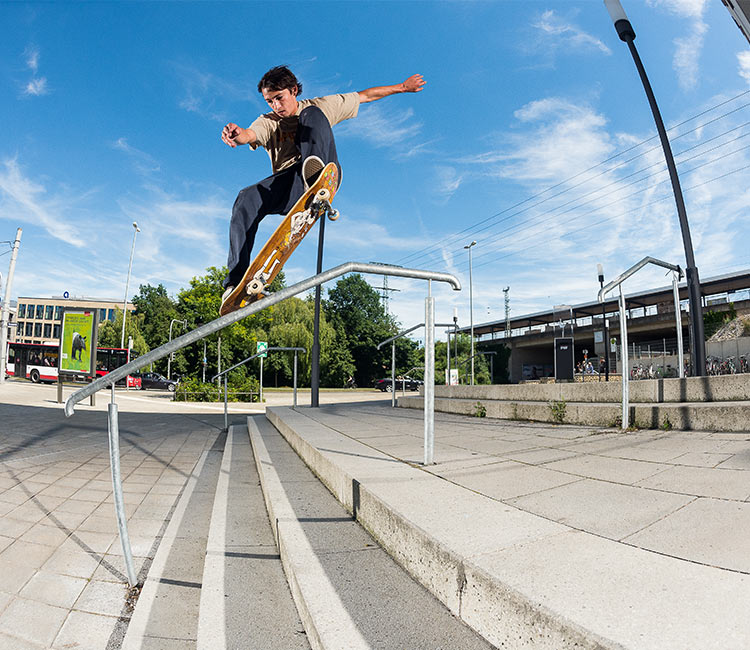 Double-set donk? Daan all in

Cory Kennedy is one of those silent ripper dudes that you won’t hear yell “This place fucking sucks!” Fuck no. This place rips and he was fucking down. That bridge Smith that he did is a rollercoaster and he was trying to grind that whole thing all the way to the fucking end, which is pretty phenomenal. And the 360 backside O’ switch front pivot? Nice costume choice there, kids. Like it. 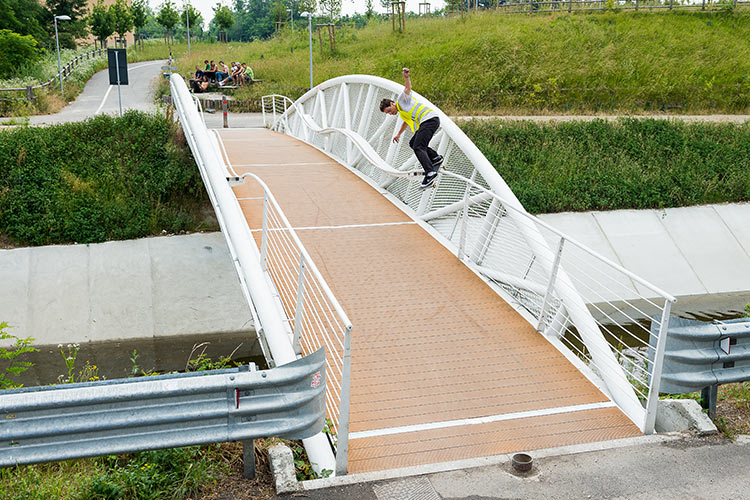 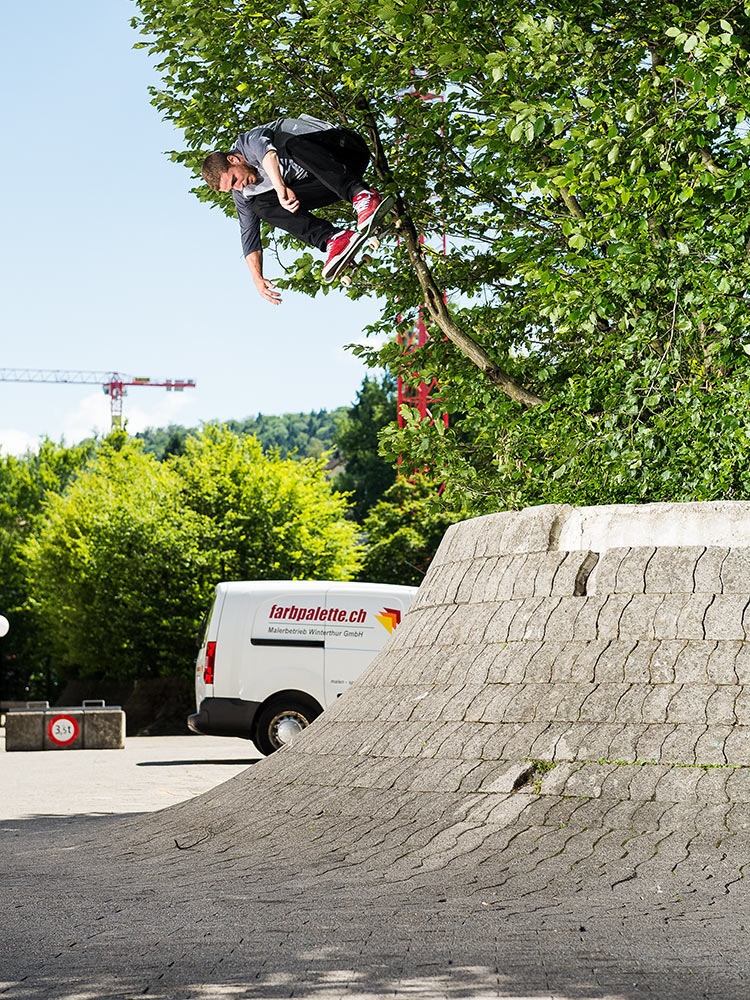 Another volcano, another time. Raven out there getting backside O 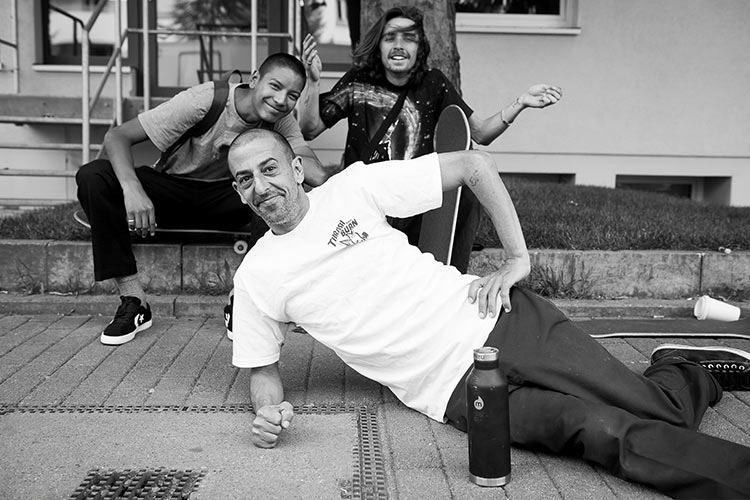 Daan Van der Linden got the switch heelflipper Kilty McBagpipe. Look at that costume choice. Thrasher. Looks like we’re doing alright, selling some shirts. Look at the control on that shit. Jumped through there, bonked it—the whole shit was all messy and he just landed there and fucking rolled away.

DVL, switch heel McBagpipe. Hey, I get shirts for free

This ramp was just finished the day we happened to show up. I asked Grant if had that frontal. Personally, I couldn’t even grind that shit. Me and Frank could throw some wheels out to it, but these guys went to work on this shit. And that frontside, I was, like, “Just fucking make it, Grant. Just fucking make it!” 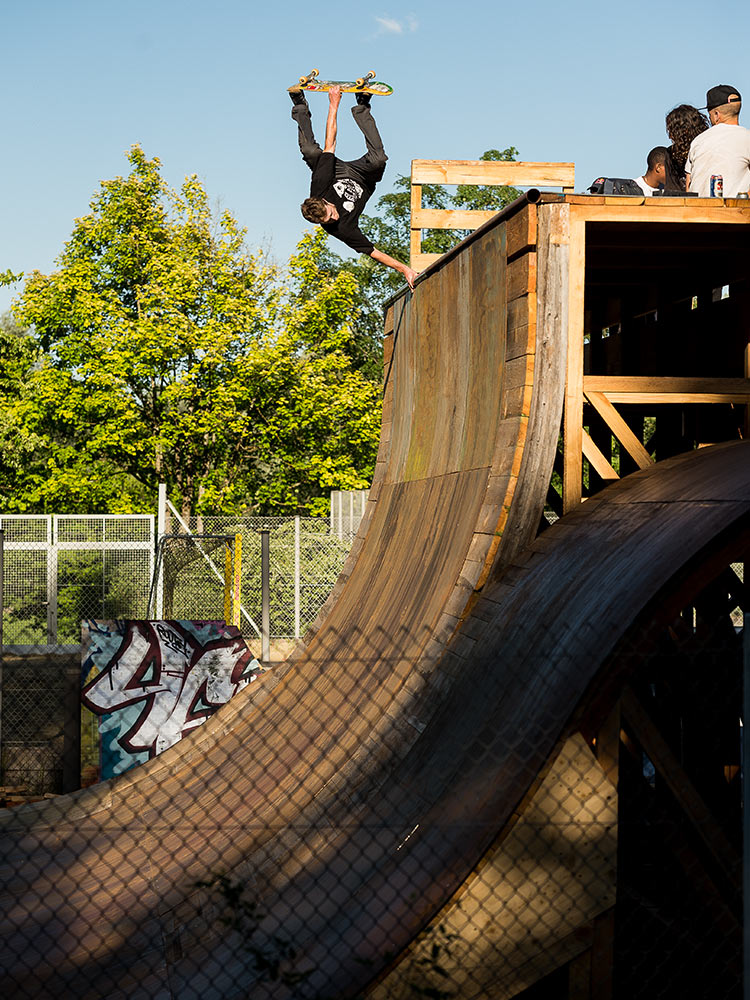 Chris Pfanner, mid-management. This is our guy. One minute he’s got the clipboard, talking about it, next thing you know he’s lipsliding the big shit. You wouldn’t even fucking look at this rail and not think about your nuts. He’s got mad snap and he gots it like that. Get the right stickers and it might slide all the way. 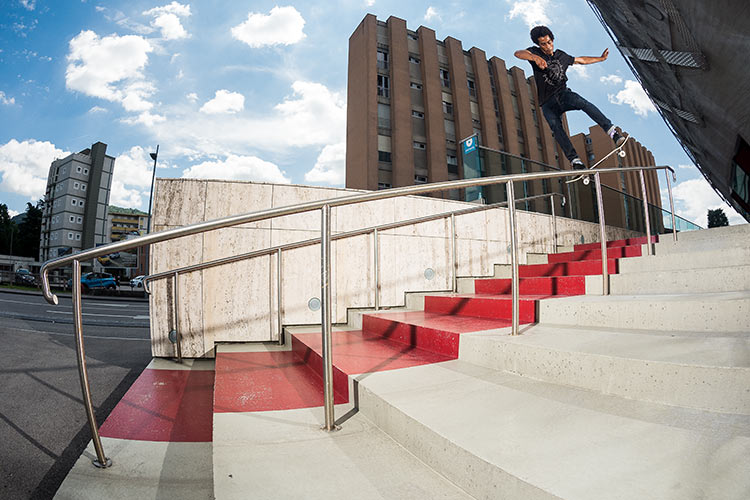 Louie Lopez is one of those silent assassins. Everyone was done at the end of the trip and Louie’s, like, “I’m gonna crooked grind and take it to the bank.” Over that fuckin’ grate? You wouldn’t do that shit. Trust me. 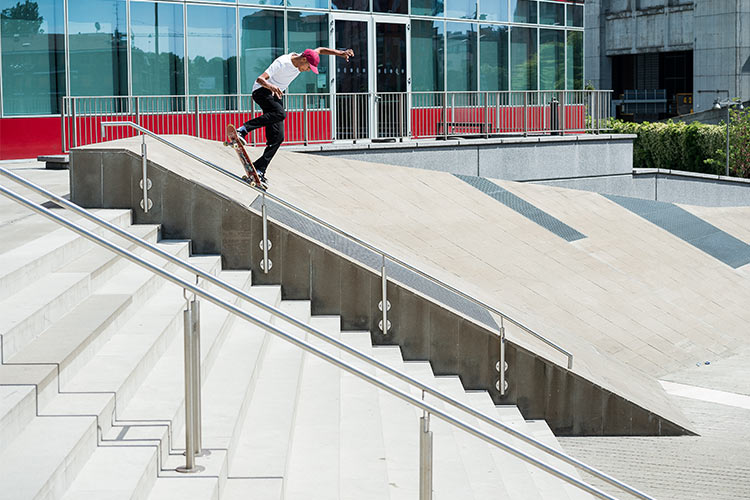 FC Milan? Great team, but team sports are wack. Luigi crooks into the bank. Must be nice 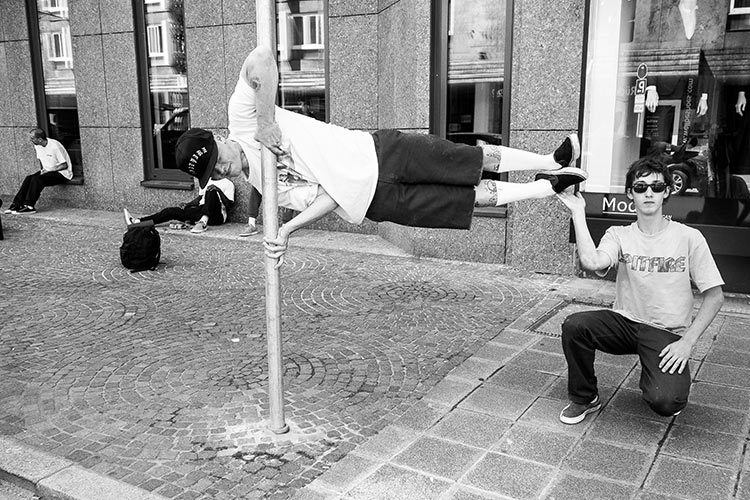 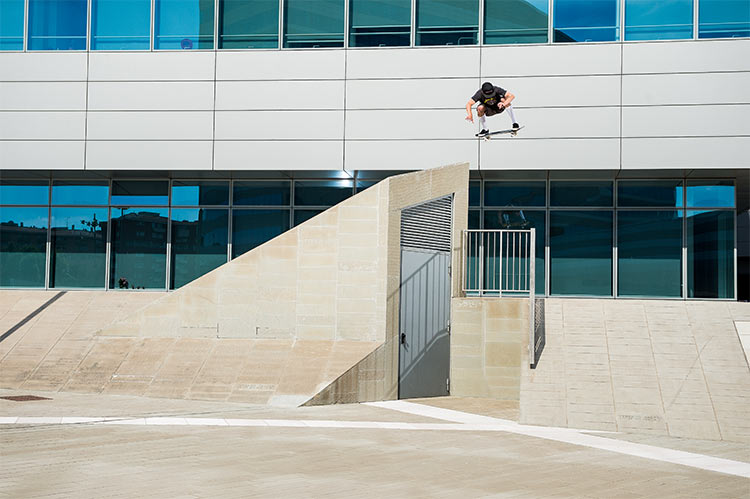 These guys bonded together as a family, but not like Gilligan’s Island, not like we’re shipwrecked! But getting that crew together with the stacked deck that we had was top shelf. We’re friends but we fight the whole time. That’s the nurturing aspect of it; that’s the whole fucking gig. E-commerce is taking over skateboarding. The whole idea of going to the shop and getting heckled is a dying thing. But that’s where you have to learn the social echelon of skateboarding, which is one of the most prestigious parts of it, because nobody just shows up and busts. I remember looking at photos of Claus Grabke when I was young and saying, “This guy’s pretty good,” and I saw him skate and I was, like, “This guy fucking sucks.” I wanted to punch him. I mean, he had good photos in the mag; he could do airs and shit, but who you skate with is the crew that you run with and that’s why skating is alive forever. Thrash N Burn is the collab. of Thrasher and Spitfire. You know; just burn it down. There’s no expectations. The concept is just having the sickest road trip. When Kyle Walker went on the first one, he saw how we did it. He stepped up his game and became SOTY five years later. It shows you the nurturing process that we work with.