If you're a fan of skating and drawing, chances are you're familiar with Henry Jones' work. Me personally, I love the shit out of both of those things so I hit up Henry to talk about skate trends, art and Internet haters. —Michael Sieben

I think of you as a political cartoonist for skateboarding. Do you see yourself that way? If not, how would you describe your art to somebody who's not familiar with it?
Yeah, I sort of see myself that way or at least as someone who likes to satirize all the different weird expectations and norms that skateboarders impose on themselves. If I were to describe it to someone who doesn't skate or hadn't seen it, simply put, it's just cartoons that poke fun at myself and the goofy culture that is skateboarding. Or sometimes it's as simple as just a drawing of a guy doing a trick because I think it looks cool. 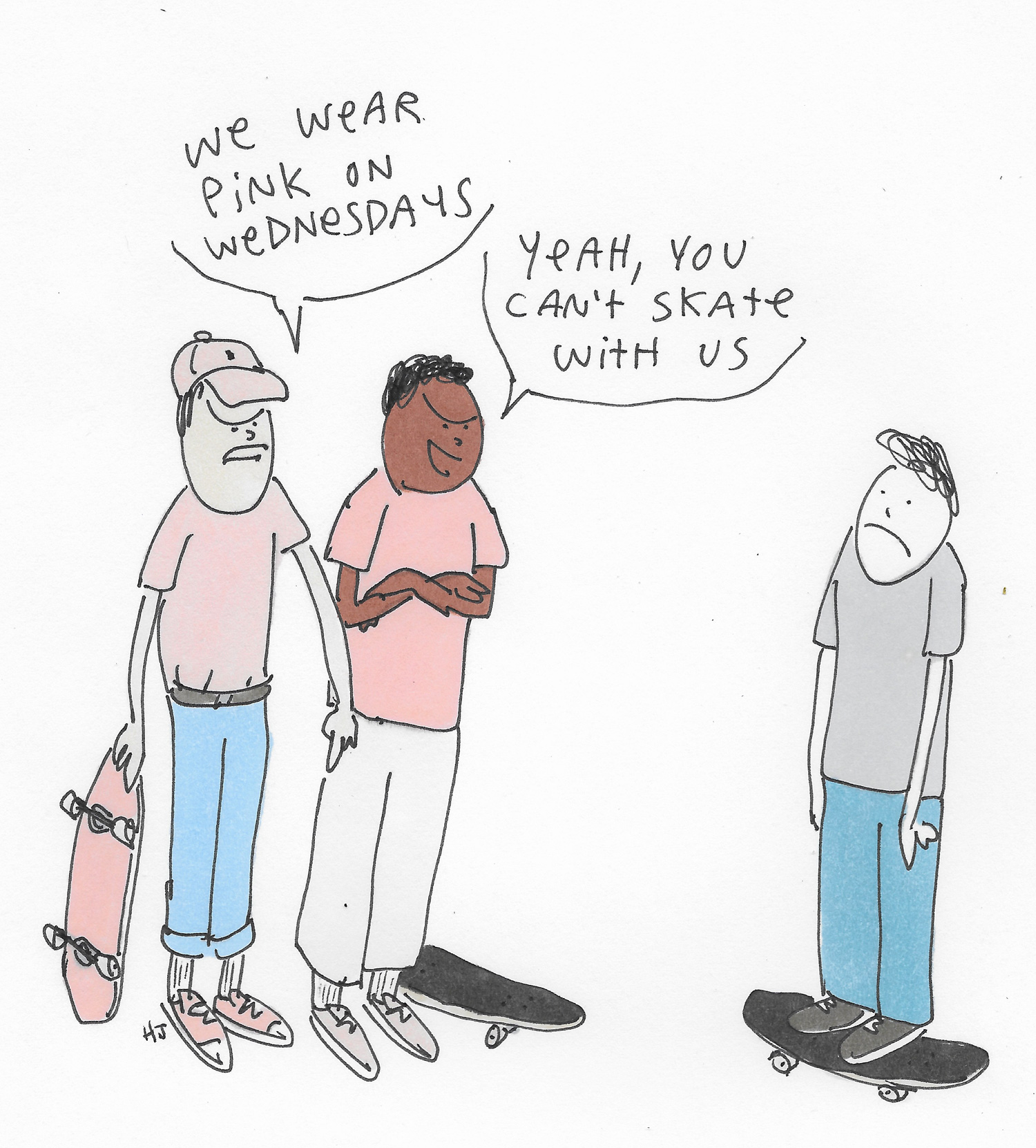 Do people ever get mad when you make fun of certain aspects of skating? What's the craziest comment you've gotten from somebody taking your drawings too personally?
Yeah, I definitely rub a decent amount of people the wrong way with some of the shit I post. Usually skateboarders seem to take a lot of it in stride, like if I make fun of dad jeans or whatever is currently trending, they know it's all in good fun. However, any time I say something about scooters or longboarders I always get a shit storm of hate. One time I made a post about how longboards, Penny boards, land paddle boards and all that kooky stuff aren't "skateboards" and this one pro longboarder wrote a whole story about my post and the ensuing comments. It was pretty funny to see people get that bent out of shape about it. Other than that, there's definitely a few people that will always tag me in stuff or comment on something to call me a hater, liberal pussy or something along those lines. 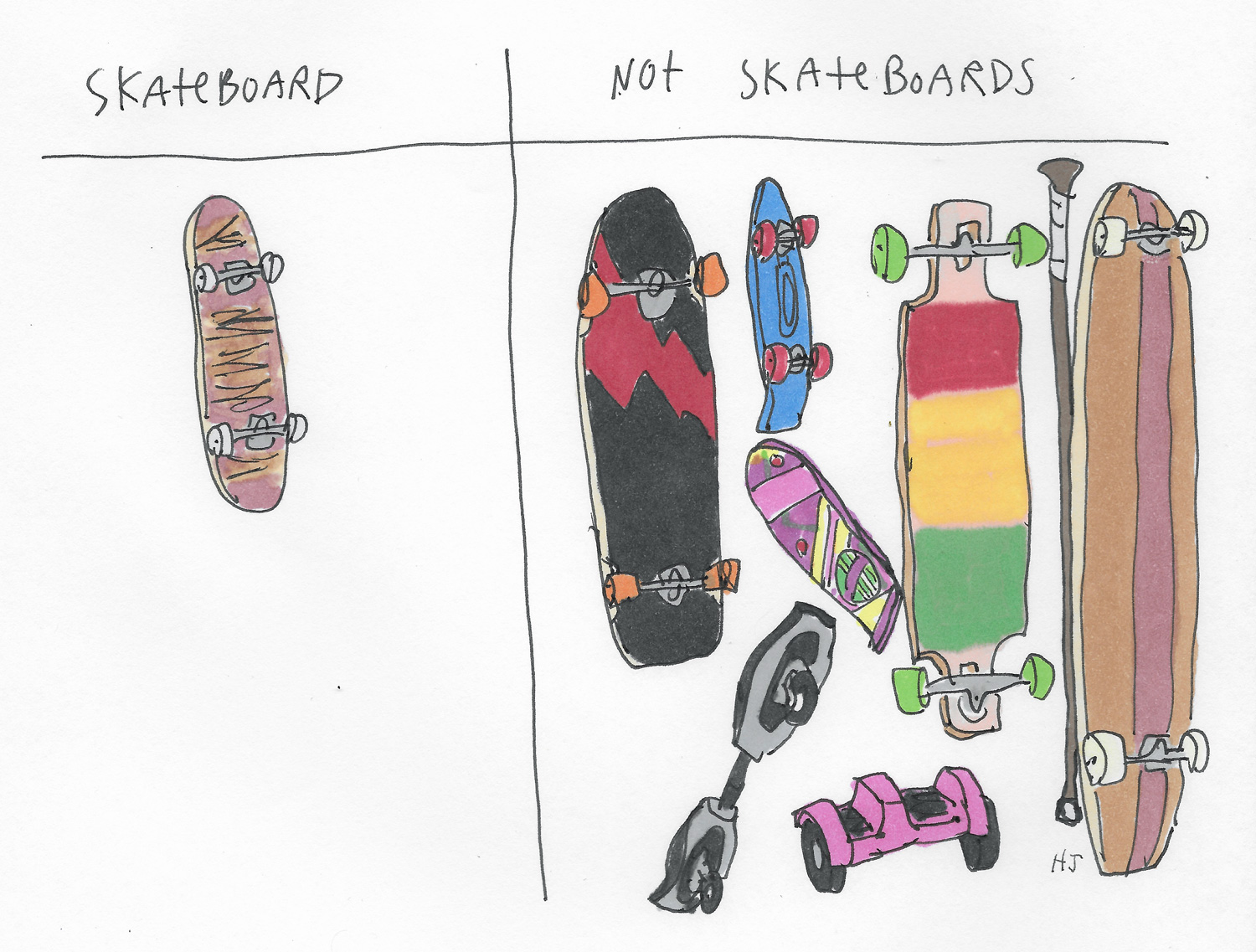 Good humor, in my opinion, should be polarizing, so I'd say you're doing something right. When you make fun of certain aspects of skateboarding, do you ever feel like you're policing the sport? Do you ever feel like you're making yourself an authority on what's acceptable and what's not?
I don't think I ever feel like I'm policing skateboarding as much as I feel like I'm just observing different aspects of skateboarding that come and go and finding the comedic value in them. I'd hate for people to think my opinion should influence what they do or don't do because that's not what skateboarding is about. If someone feels offended or targeted by something I draw, maybe there is some merit to it?  And if that's the case, what's wrong with having a little laugh at yourself every once in a while?

What do you think the worst trend in skateboarding is right now?
Not being yourself.

Looking back, what's the lamest trend you bought into as a kid? Any embarrassing or regrettable wardrobe decisions?
Nothing too terrible. Some questionable band hoodies here and there. Definitely had a stud belt and some spiked wristbands for a little bit in the very early 2000s. I managed to avoid the whole tight pants thing back then which I will forever be grateful for. 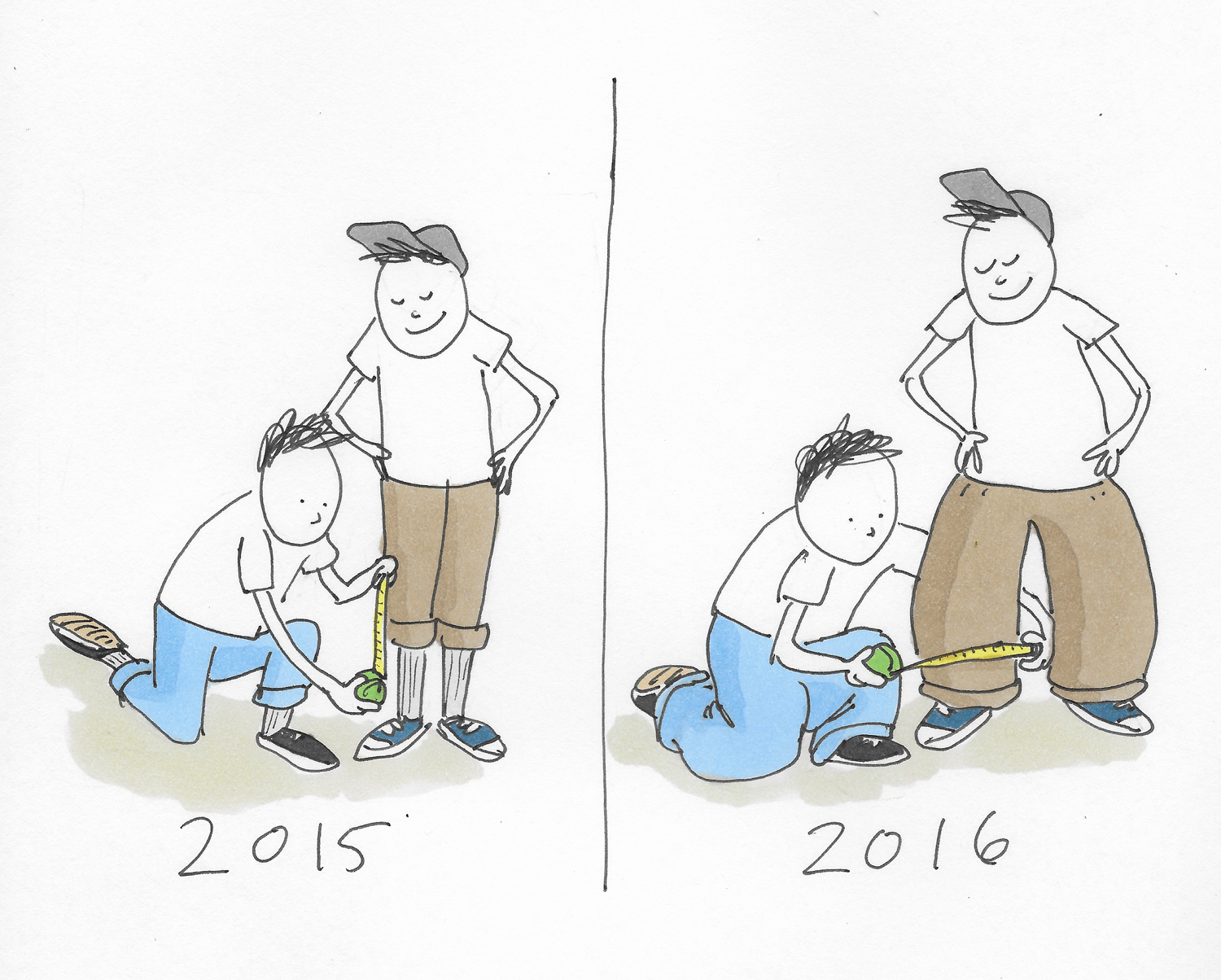 Did you grow up being super stoked on skate graphics? What's the most memorable graphic from your youth?
Yeah, I started skating when I was, like, eight or nine, so around 1999/2000. My local shop was basically just a side room of the local hunting and fishing store, Gordon's, but they were always stocked with all the Blind graphics, all the Wet Willy and Flame Boy stuff, Hook-Ups boards. As a kid, all those really appealed to me because I really liked drawing too. The James Craig "Ice-Cream Man" graphic sticks out a lot for me. I remember saving up for weeks to get that and when I finally set it up it was way wider than what I was riding. I didn't care, though. I just bought it for the graphic.

What's your opinion of the current state of skate graphics?
I think I hold a lot of nostalgia towards what graphics were like when I was younger, so I'm not as excited about graphics as I used to be, I don't think. But there's still definitely a lot of companies and artists that put out some really cool stuff so it could be worse. Some brands seem to kinda just cop out in the art department, but I guess you gotta pay the bills somehow.

What's your favorite brand out right now?
I don't know if I have a favorite but I'm stoked that Sean Cliver is doing art for Paisley Skates. Definitely looking forward to seeing more from them.

What would be your dream company to collaborate with?
I've always thought it'd be cool to be able to do my own rendition of the Spitfire Bighead logo just because it's so iconic to me. Pipe dreams.

Are you considering starting a board brand? Is that something you'd want to do at some point?
It's always been something that I've kind of thought about, but then again, I'm not really even sure what my brand is at this point. It might happen in the future but it's definitely not something I'm putting all my focus into right now. It'd be cool to be able to release a few boards, though, in a sort of way that's not really establishing myself as a board brand, more of, like, an art thing, I guess.

You designed some decks for Sk8mafia not too long ago. Were those the first decks you've designed? Have you worked with any other brands?
I actually did a graphic for Foundation last year for an artist series they were doing around J. Grant Brittain's "The Push" photo of Tod Swank. Other than that, I've done a few shop boards for Fairman's and some other shops. I'll do a board every once in a while for my friend Angel's brand Terror of Planet X which is always fun. 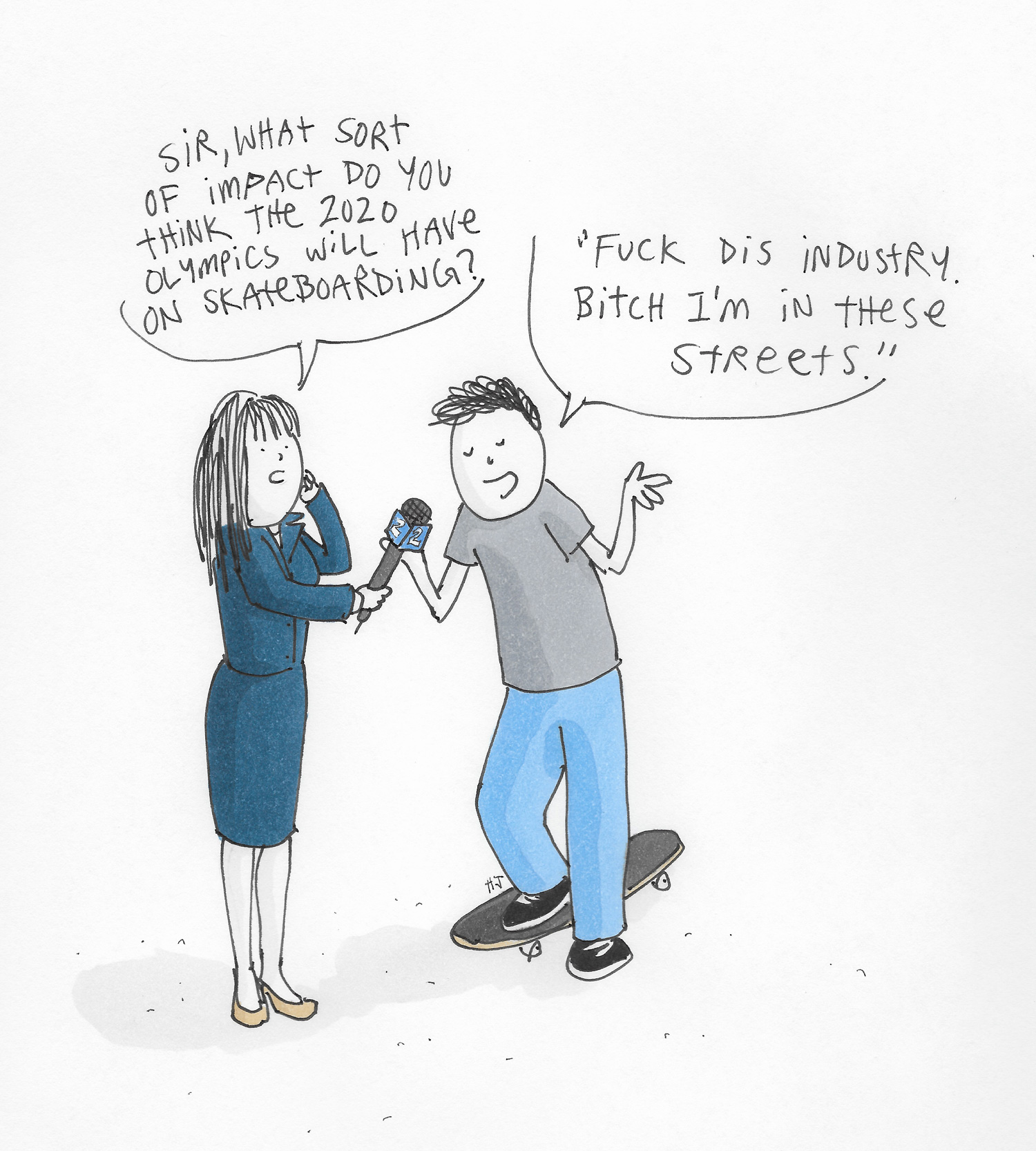 When you were a kid, did you dream about being a pro skater? Was there ever a moment where you were, like, "Maybe I'll be an art dude instead"?
I think the idea or dream of being a pro skater when I was younger didn't really last too long. It might've been a reason for me to get into skateboarding but I think I realized pretty quick that I didn't, nor would ever, have the stones to jump down anything bigger than, like, a ten-stair or mess with handrails. I've always done art, though, even before I started skateboarding, so it's kind of just natural to draw about skateboarding since it's all I've really known for the past 17 years.  So, yeah, I think I've always been an art dude and there was a time when I thought, "Maybe I'll be a skate dude instead," and just never stopped doing either. 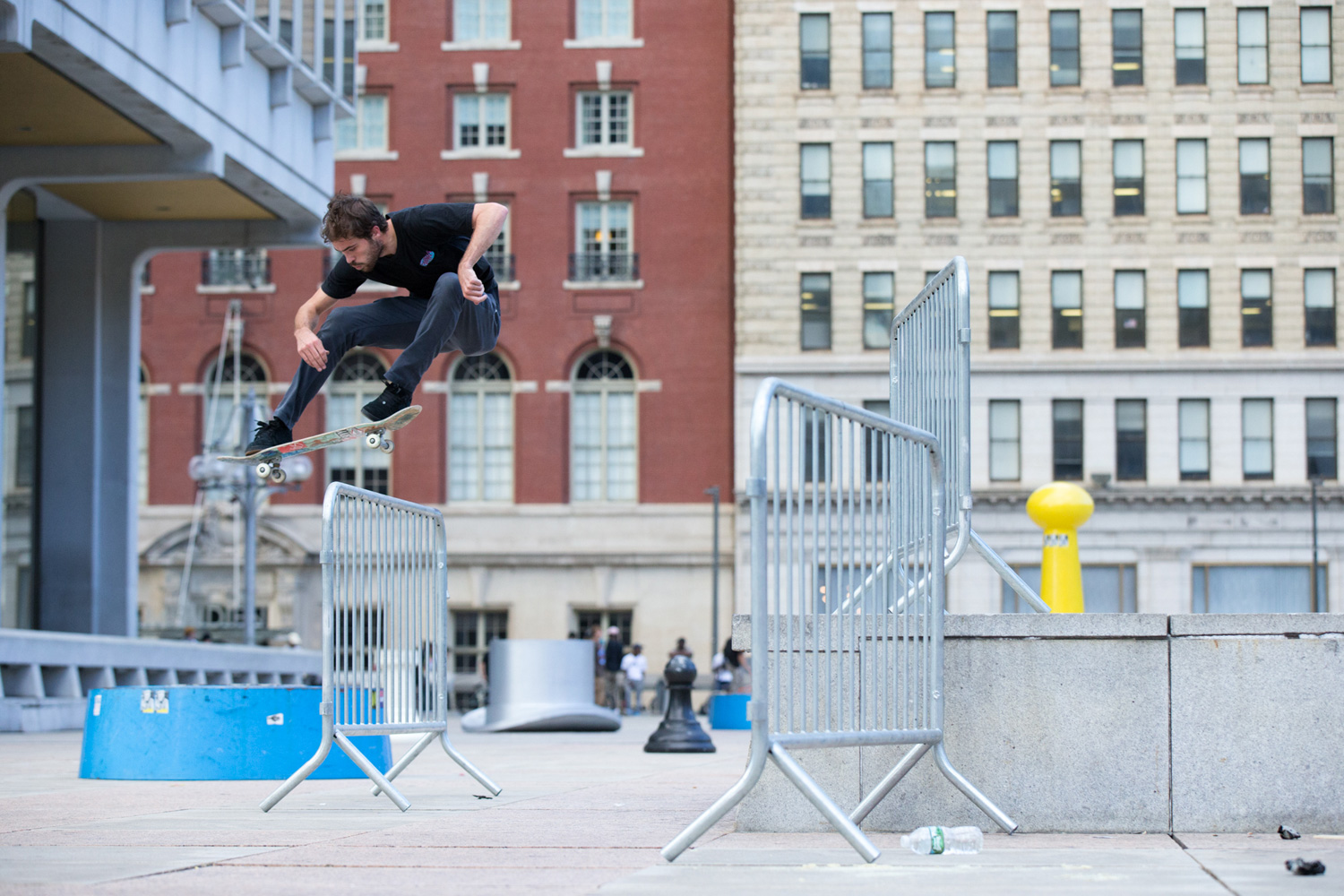 Who are some of your favorite artists?
I really like Ralph Steadman's work a lot.  Hayao Miyazaki, Jean Jullien, Mark Gonzales, Sean Cliver, J Strickland, my mom, Todd Francis—the list goes on.

Do you follow contemporary art or do you mainly just pay attention to skate-related stuff?
Mostly just skateboarding stuff. I'm kinda shitty about knowing what's actually going on in the contemporary art world.

Do you credit most of your success or popularity to Instagram? What do you think your career would be like without the Internet?
As much as I hate to say it, yes. I'm super good at procrastinating and just being unmotivated in general so I don't think I could've achieved the reach that I have without the help of the internet. Thank you, Al Gore. 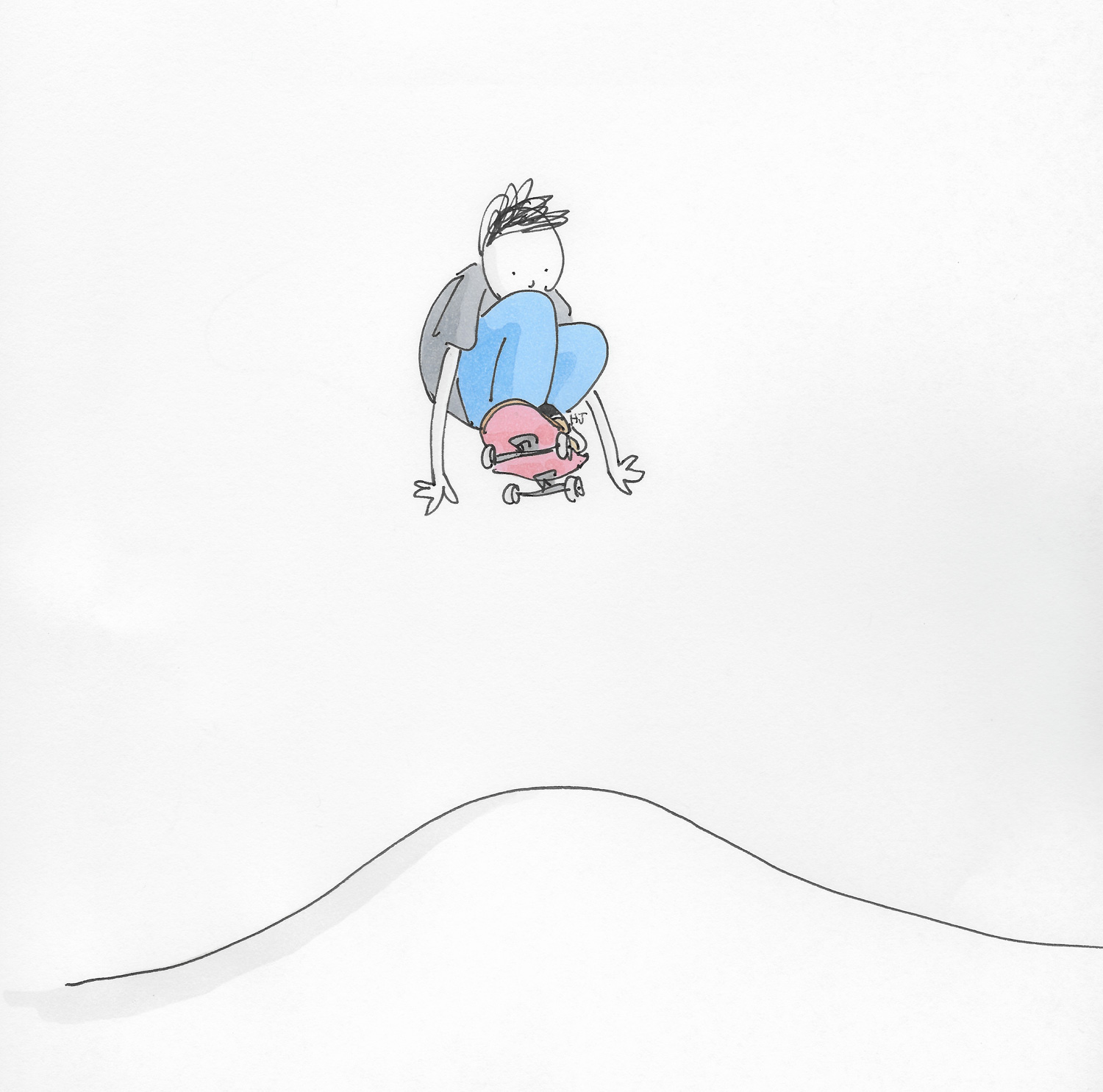 What do you think you'll be doing in five years?
Well, I recently stopped working hourly at Fairman's in West Chester so I could just focus on art and finishing college. I do a lot of freelance work, sell prints and t-shirts sometimes and that's all been paying the rent. So if I can keep working for myself at building a brand of sorts and just become more efficient in the process, it'd be pretty cool to still be doing that in five years. Unless someone wants to give me a job with full benefits when I get my Liberal Arts degree—

What are you working on right now?
Nothing too crazy right now. Mostly just trying to get better at what I'm already doing with my t-shirts and stuff. Probably gonna put something on a sweatshirt soon and maybe do some hats. Besides that, just freelance stuff here and there. Who knows, though, some pretty awesome opportunities have fallen into my lap before, so I'm excited to keep contributing to this industry in whatever way I can.

What's your advice for the young art kids out there?
Make art because you like making art. Also, take a figure-drawing class if you ever get the chance.

Any last words for the Internet viewers?
Stay in school. 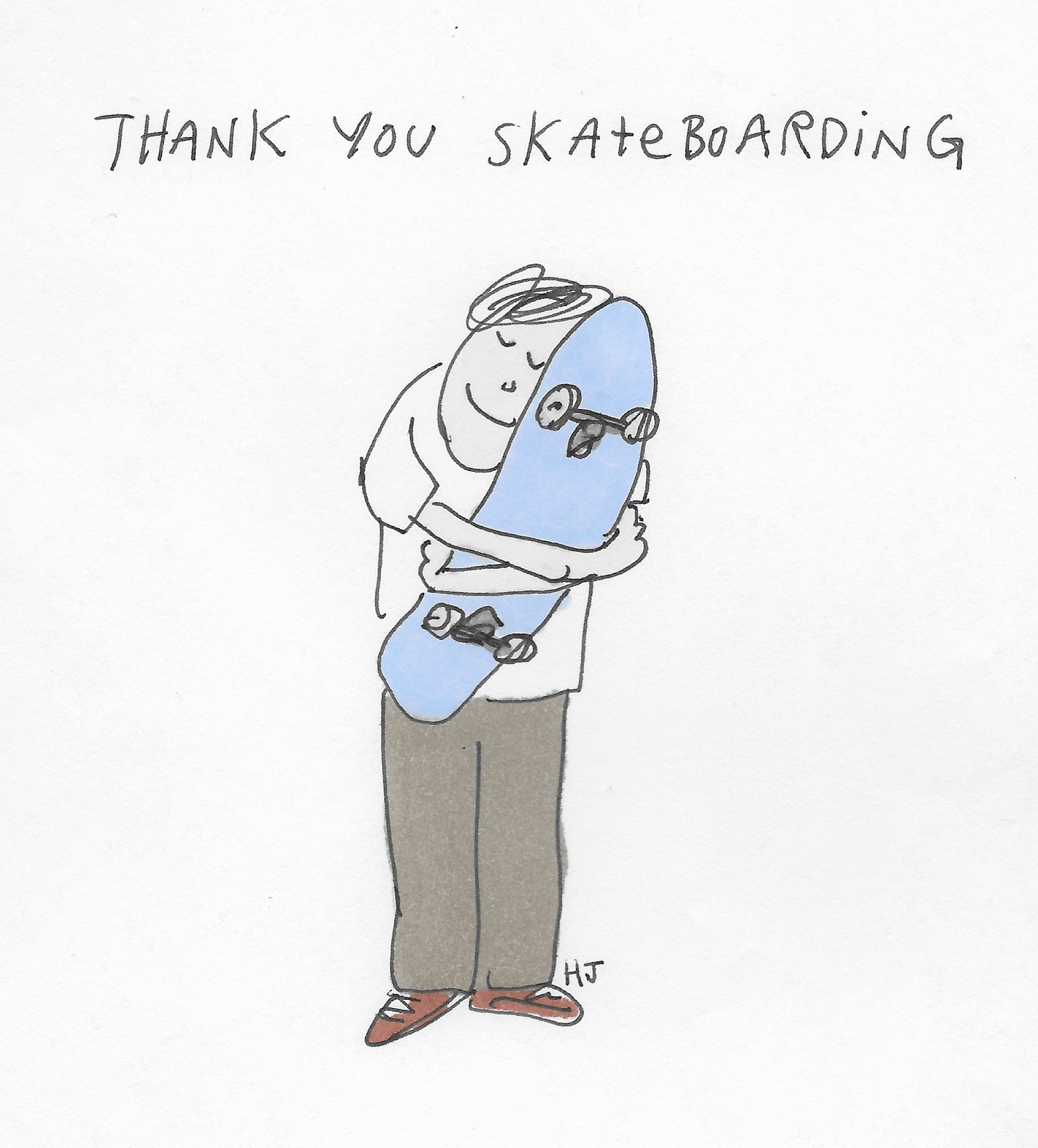