It’s about time Tucson got some action, luckily Darren Navarrette and his fellow the fiends rolled through to hype up the Tumble at the Santa Rita Skatepark. Not only is it a perfect time for a Sonoran session, but this particular park also boasts some of the regions best bowls. Skaters from Tucson and all over the Southwest came out of the woodwork see some of the cob webs and coping get kicked off the old bowl. And rumor has it, the city is looking into expanding the skate park but first wanted to see if there was an interest. Sure enough, there was plenty of interest with a little extra to go around! There were a few rainstorms throughout the day, but that didn’t slow the sessions down one bit. The concrete must’ve still been hot from Chris Russell’s frenzied runs. —Rhino 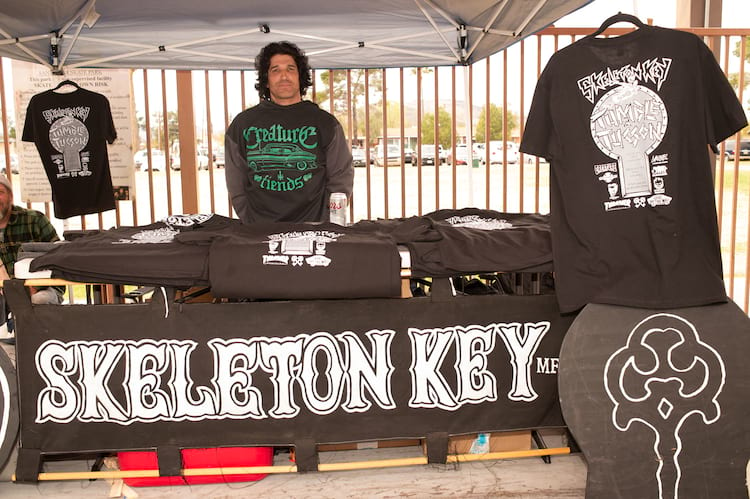 Before the main event, Darren Navarrette started the expo by holding it down at Skeleton Key tent 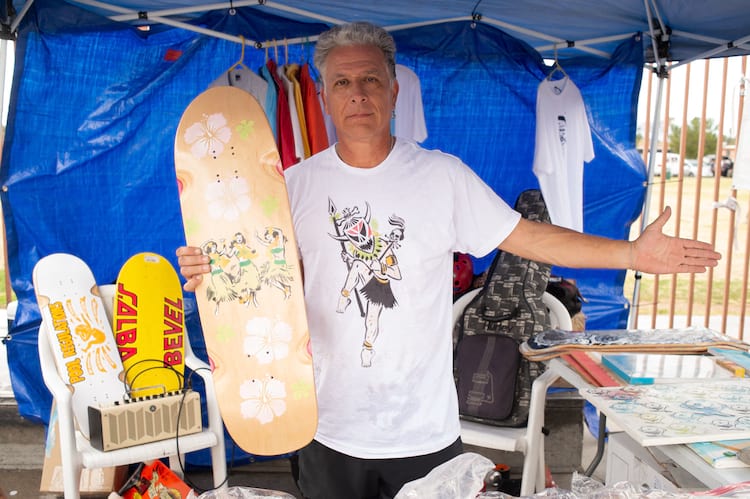 Salba was there there too, staying covered while slinging some art, decks and t-shirts 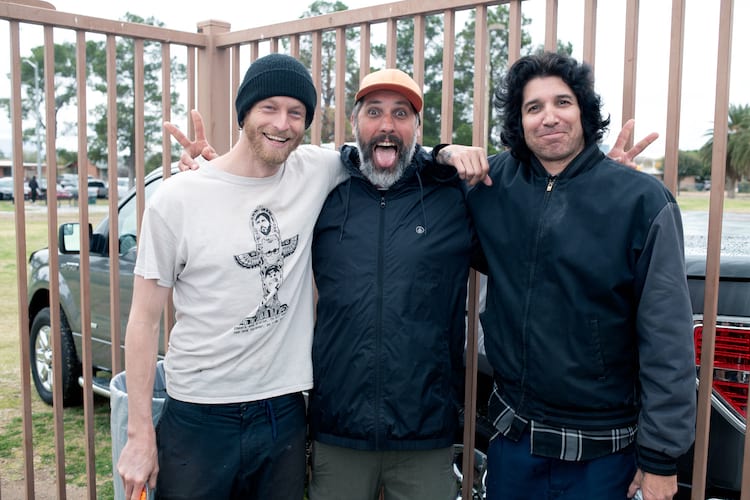 Staple of the Tucson scene, Aaron Suski gave the event his stamp of approval 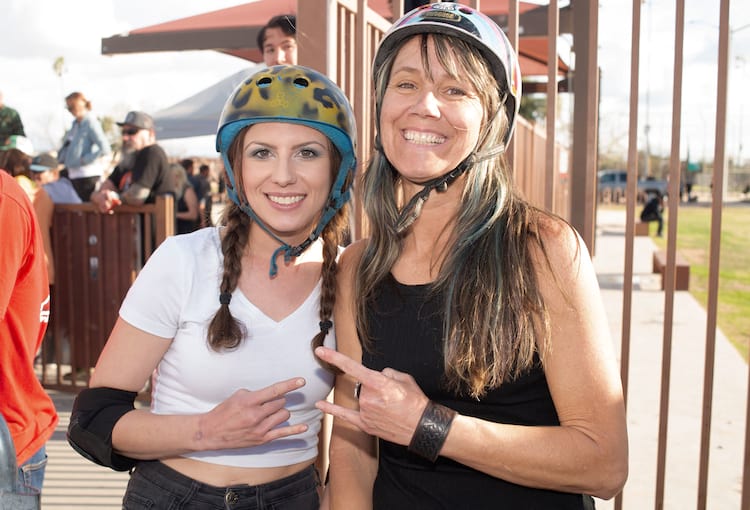 While these two held it down by the bowl! 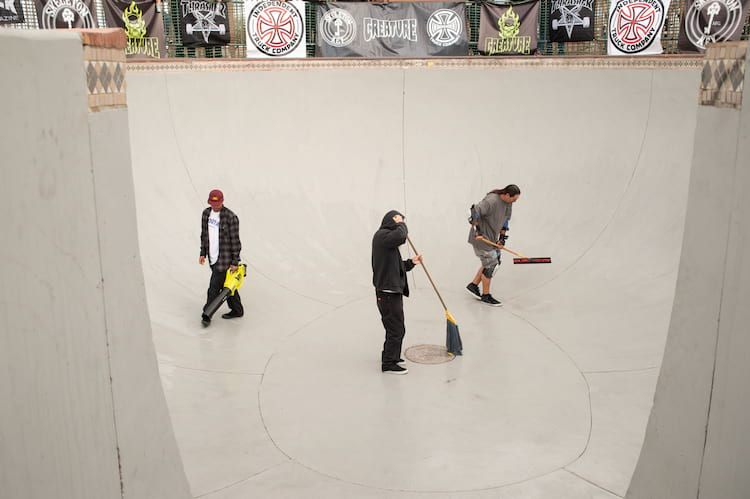 And after a random rain storm rolled through, the crew saved the day by moving quickly, drying up the bowl 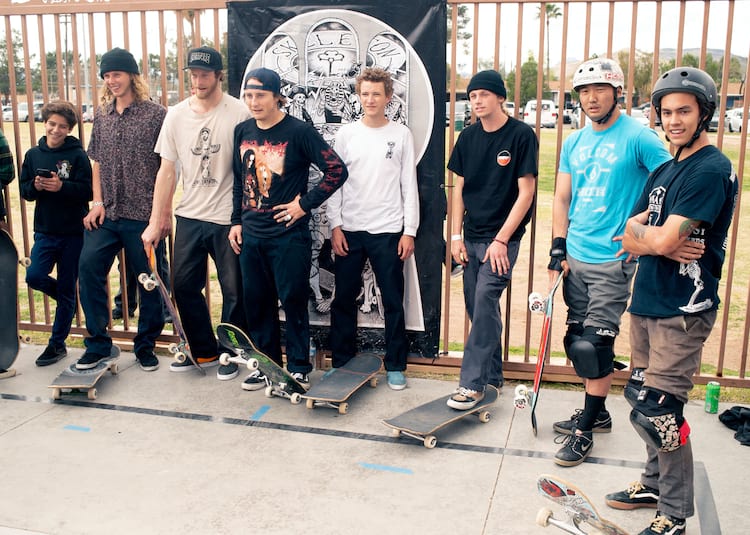 Just waiting for the last wet spots to dry… 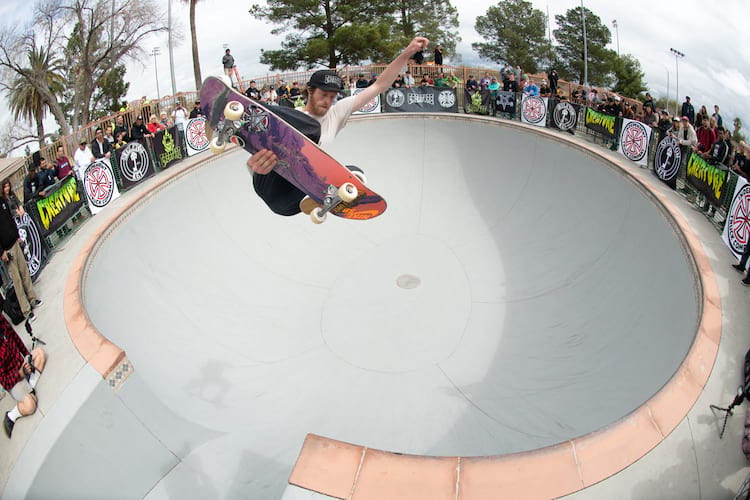 First up, Willis Kimbel sends a stale over the gorge where astream was running just moments before 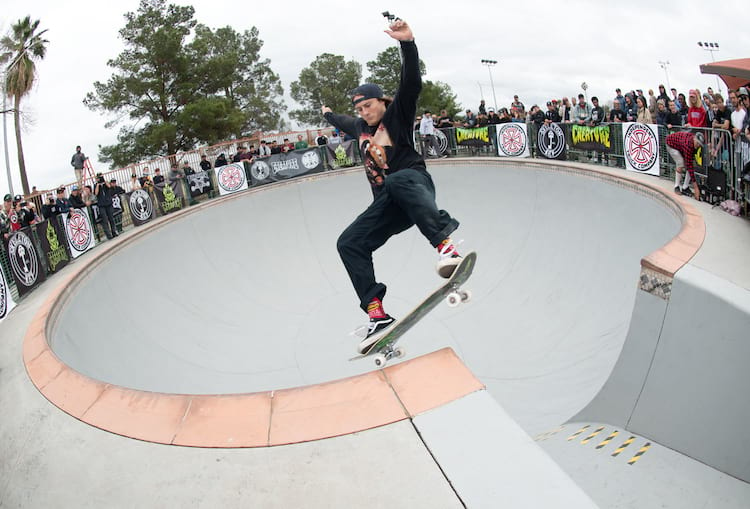 Then Chris Russell, seen here mid-flight on a lipslide revert, started to really heat things up 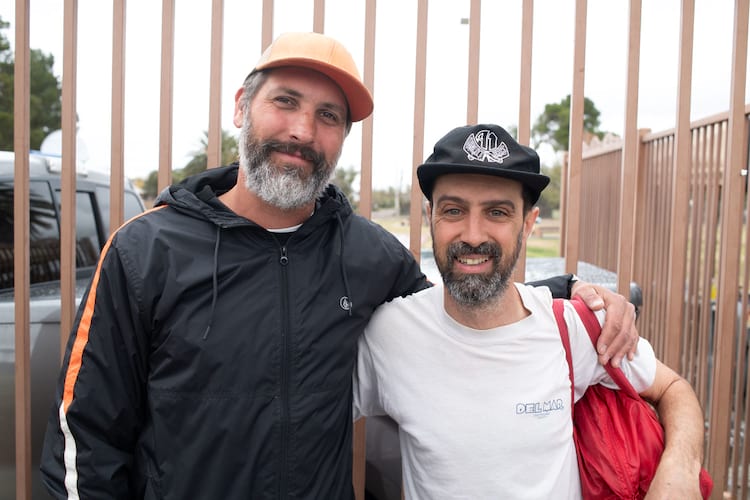 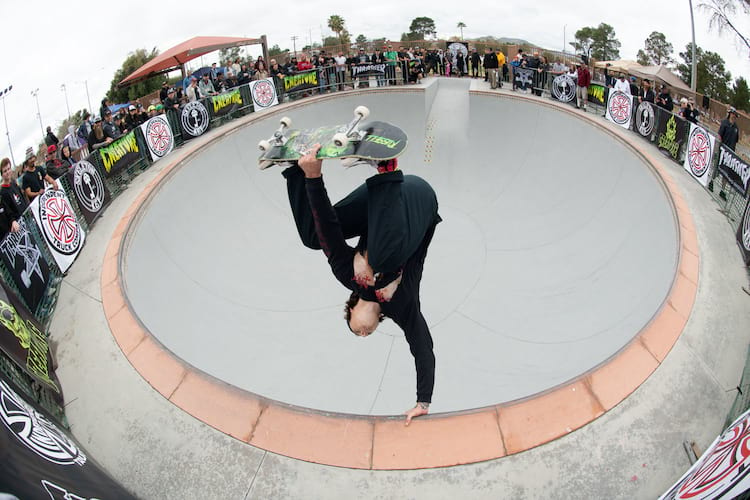 The Muscle eggplants on the face wall 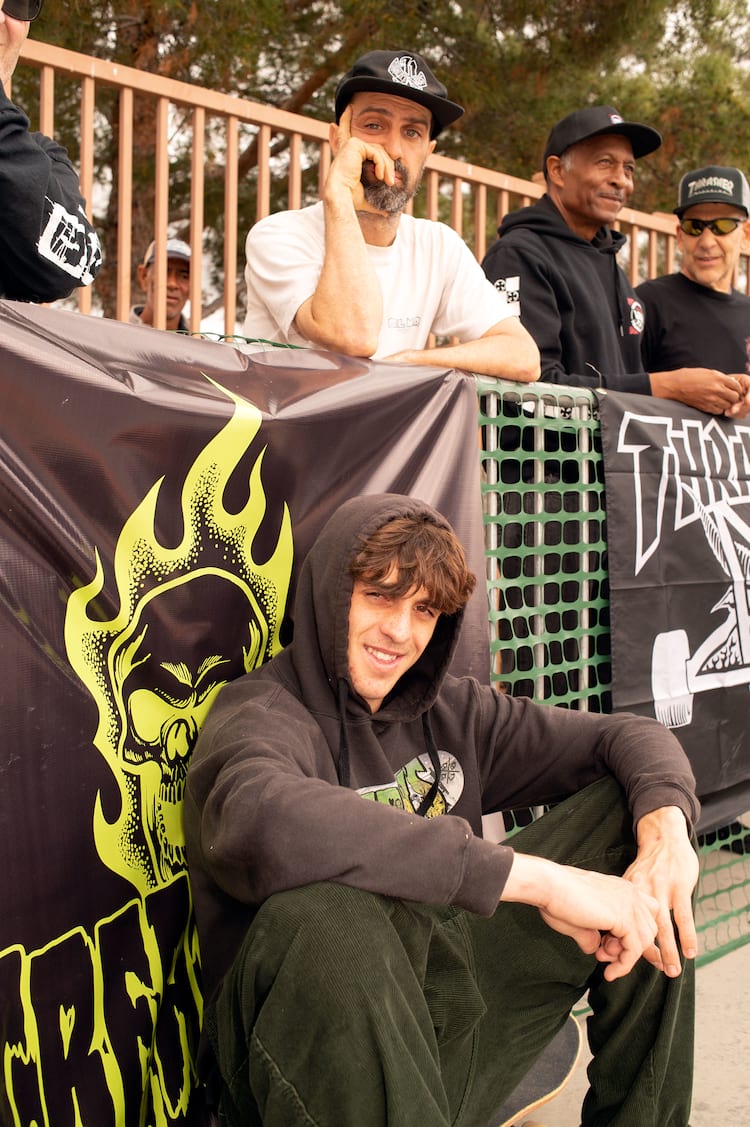 Worlds collide as Cory Juneau and Puleo watching the action 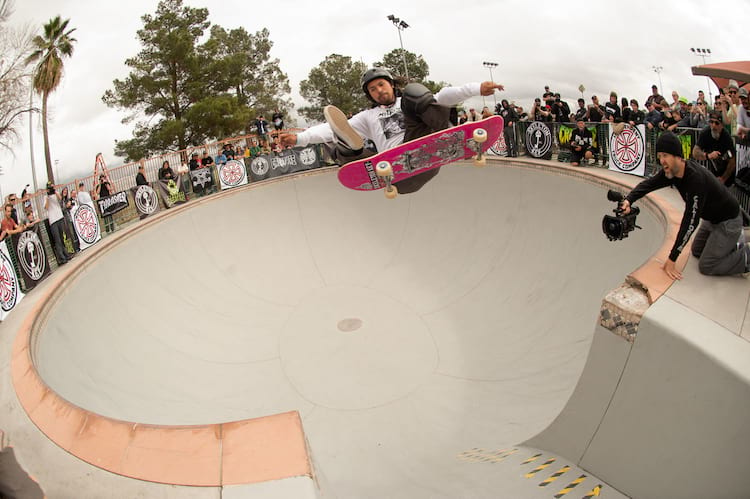 Josh Rodriquez throws a one footer over the channel 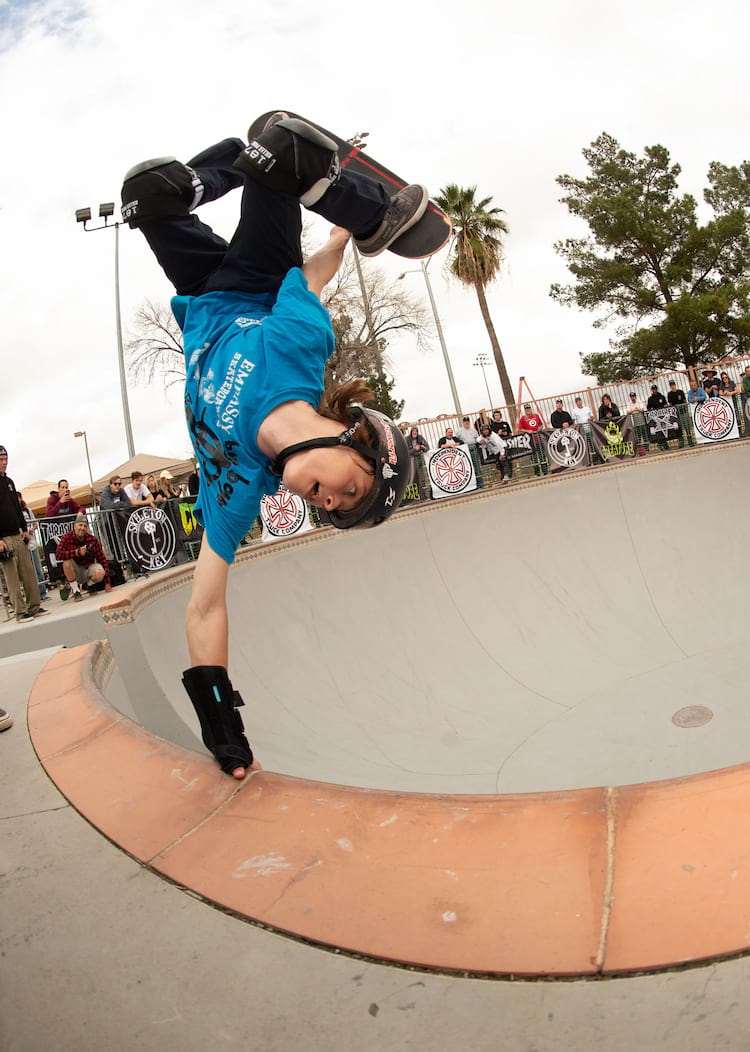 Allen Midgett’s son Nathan shows proper from on the andrecht 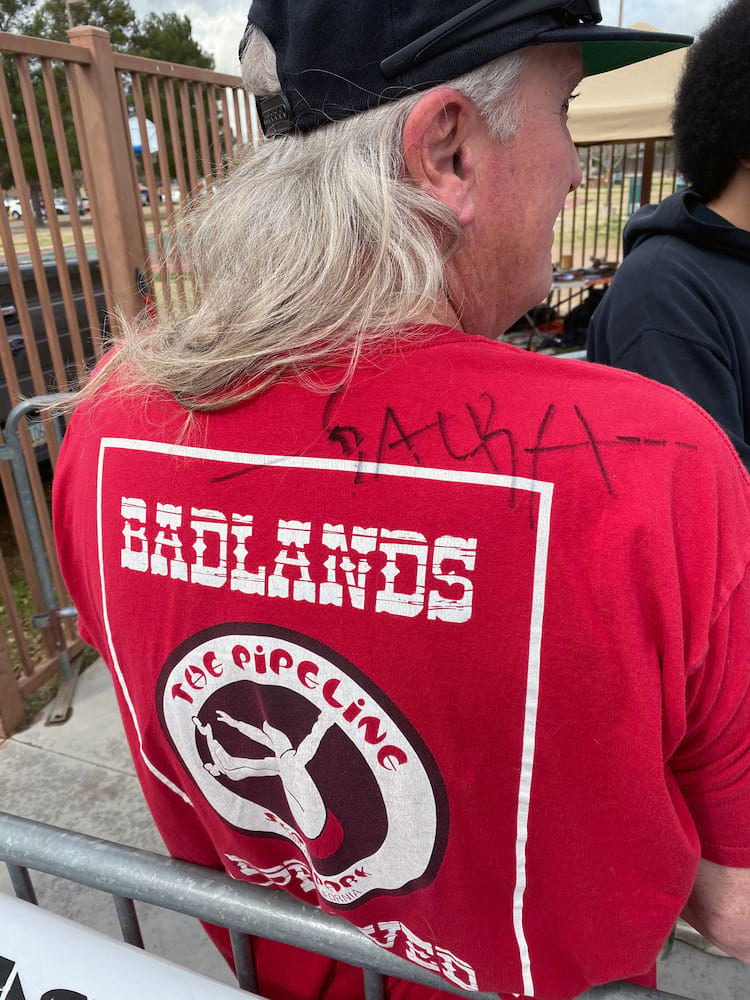 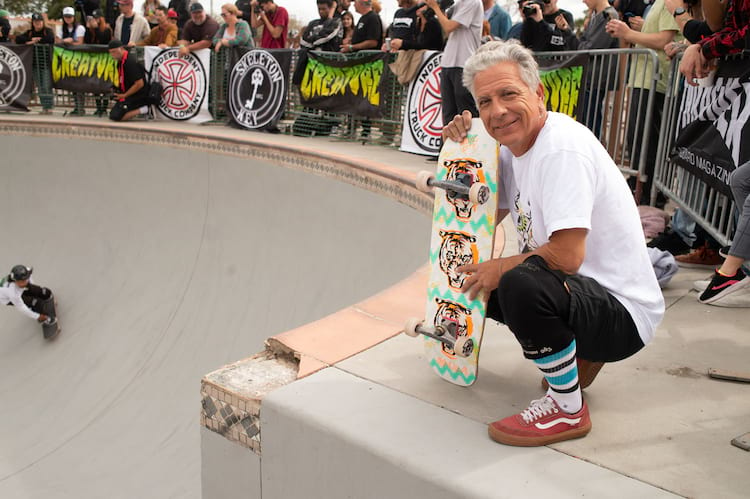 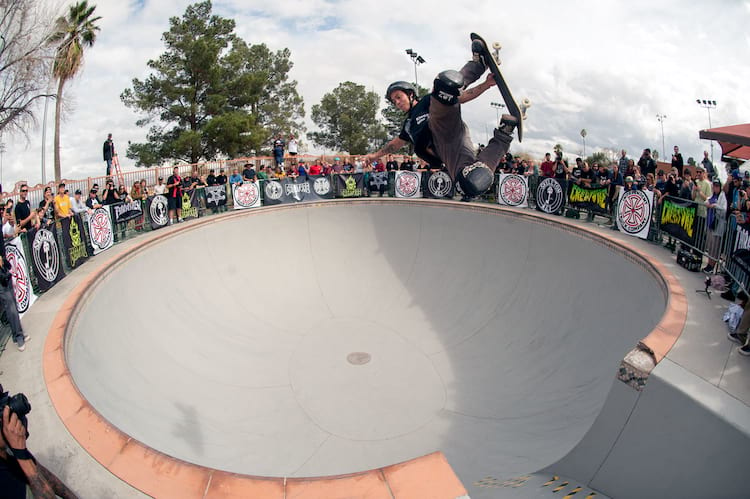 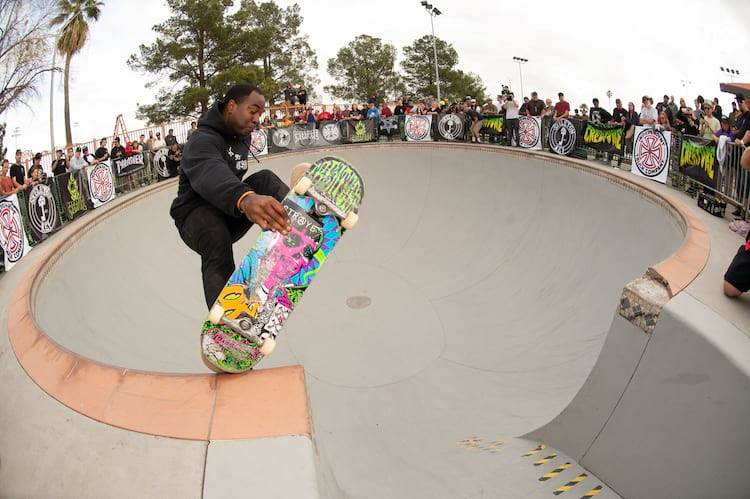 Jay Fairman catches a heela monster on the edge 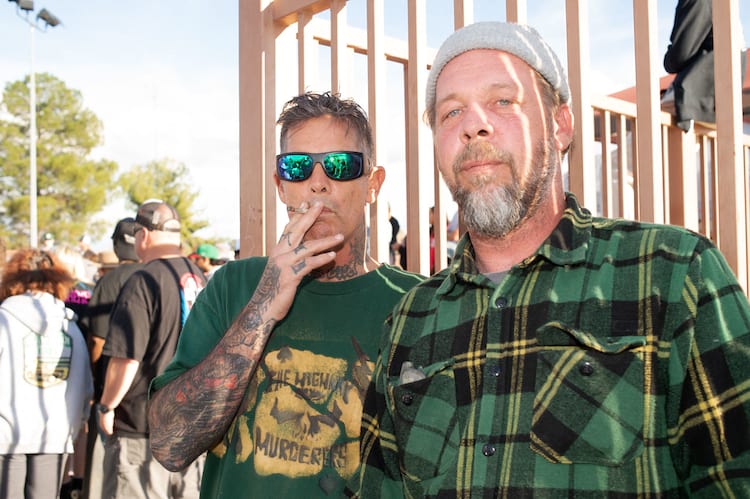 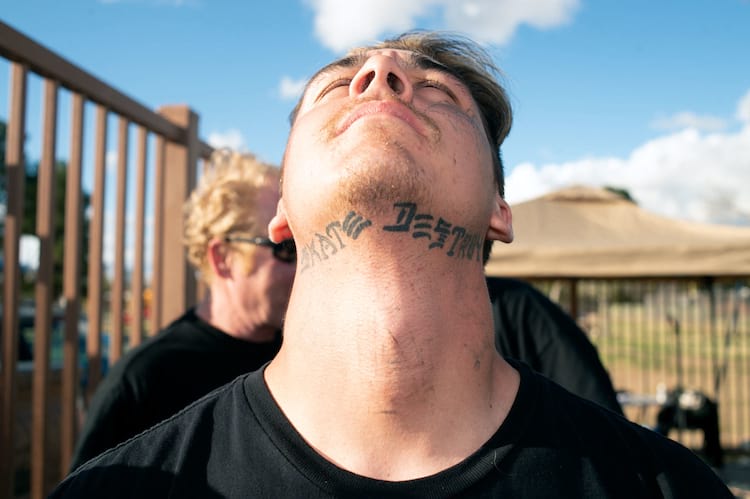 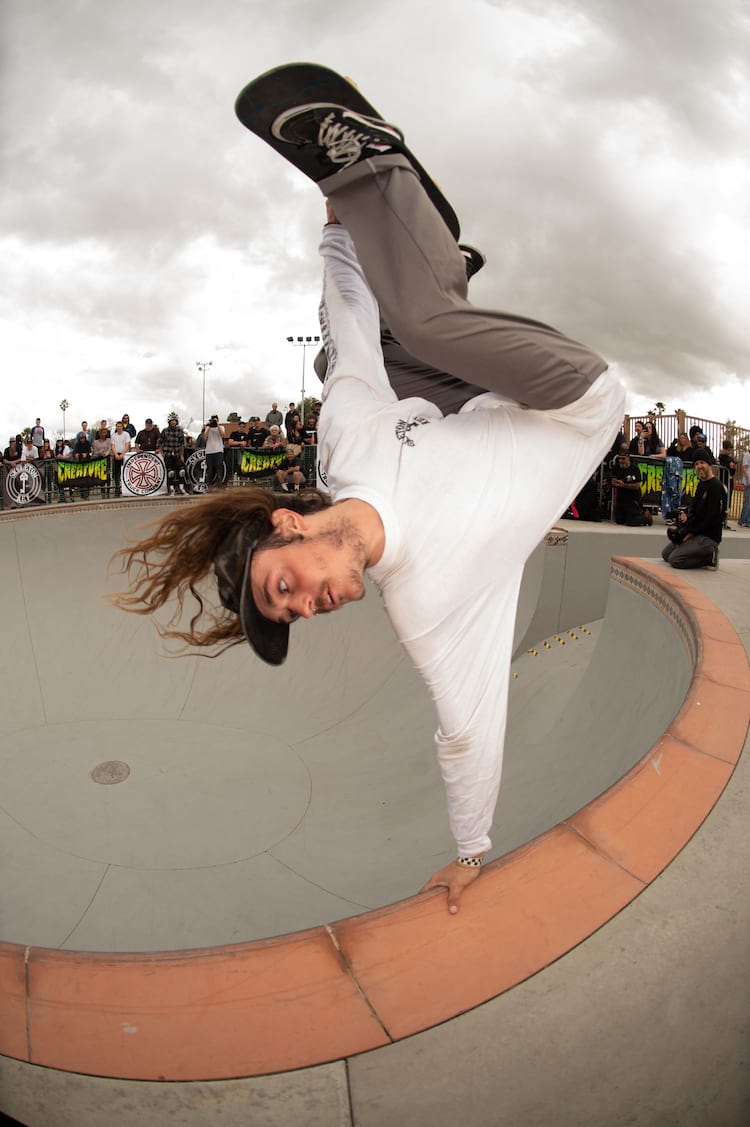 Team Pain’s Charlie Martin knows a bowl inside and out. This frontside invert was almost a given 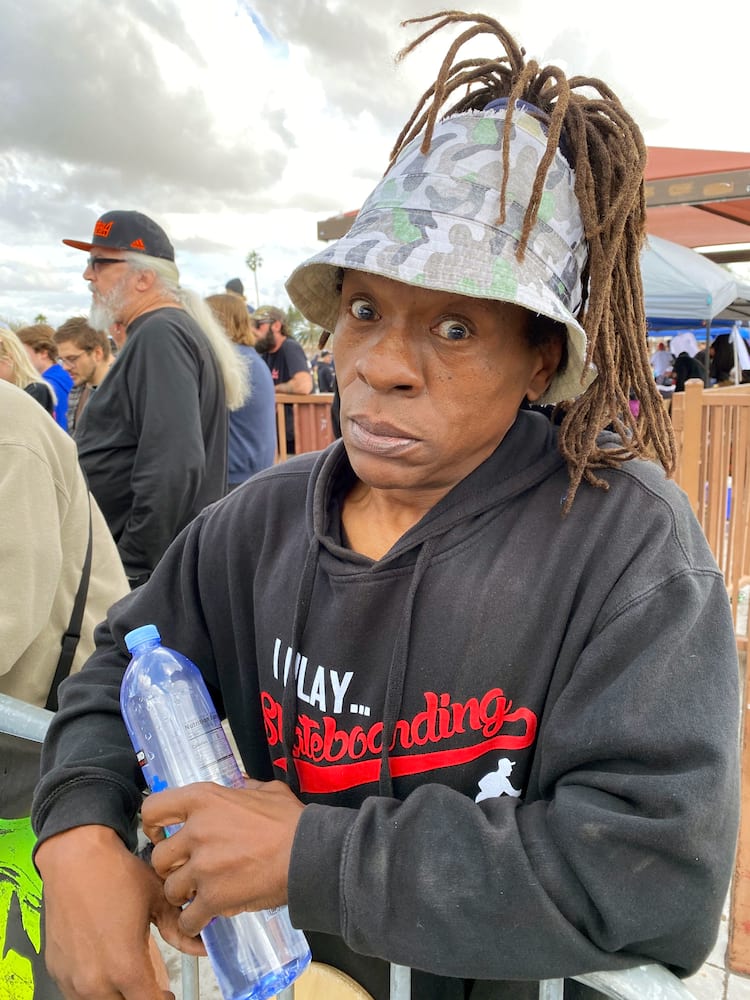 What?! Ron Allen showed up! 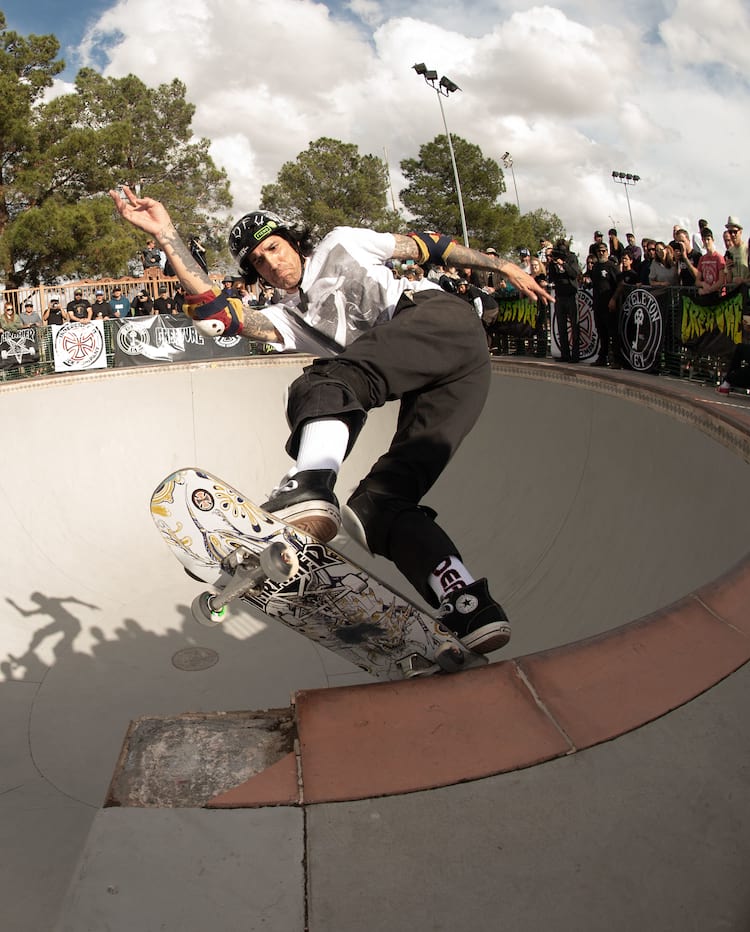 After manning the booth, Navs had to at least splash around a little. Here he is taking a dip with a pivot fakie 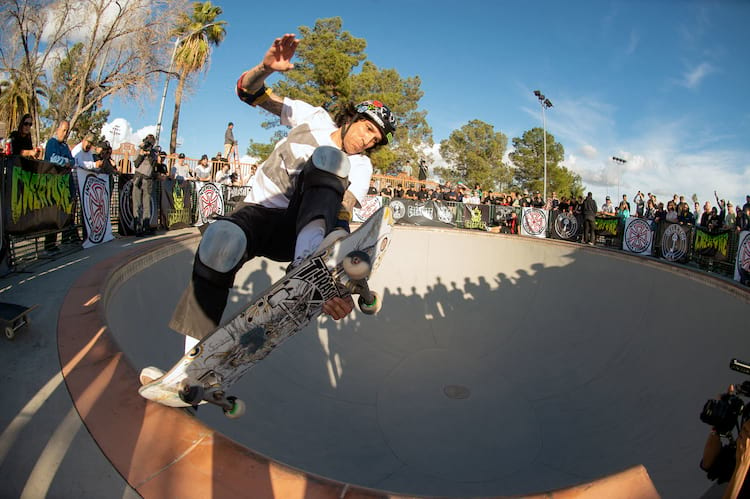 And following up with a stylish lien tap 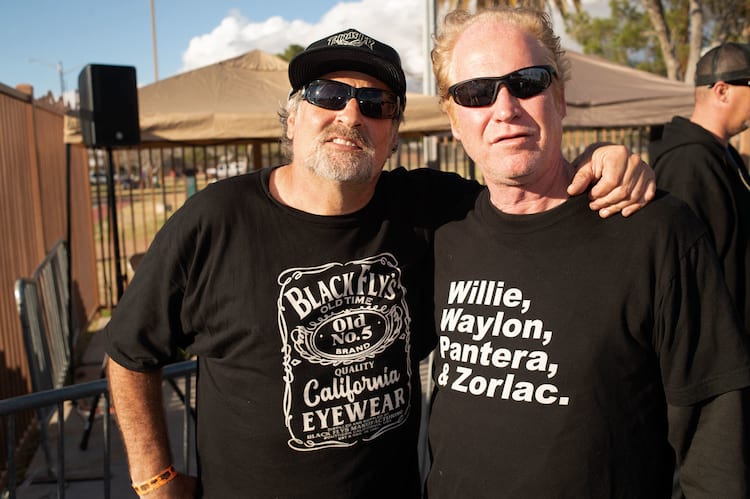 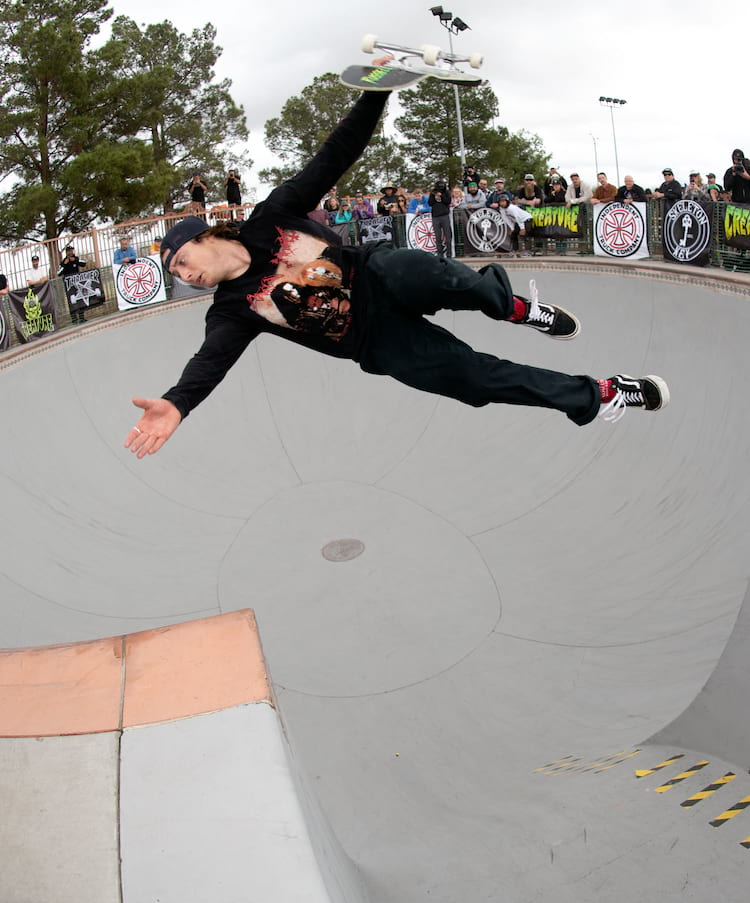 Back in the bowl, Russell's on another level... 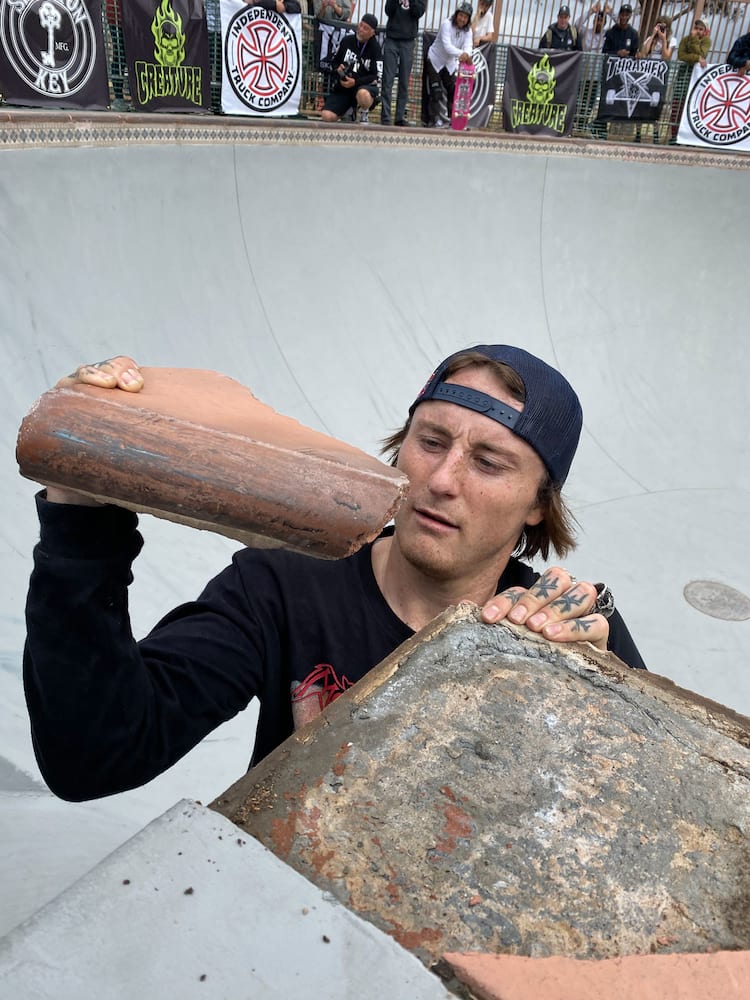 His secret is beefing up by eating coping for breakfast 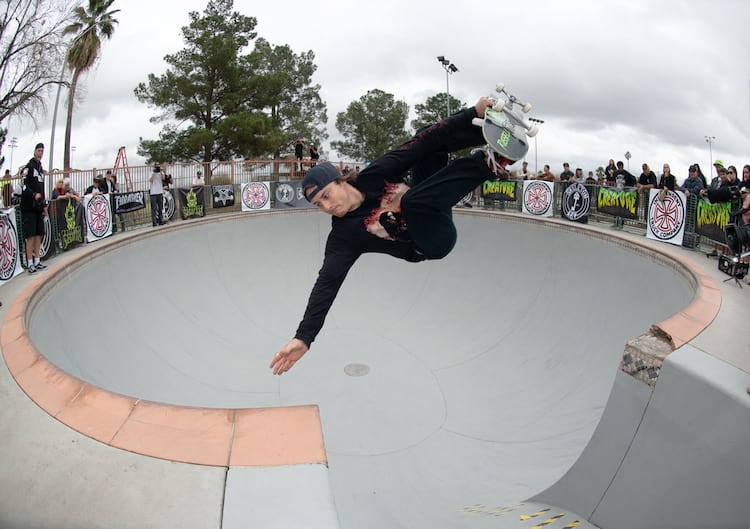 Then muscling through a session-closing frontside invert for lunch. Now you know

Thanks to all the sponsors and the skaters who showed up to rip, let's get it going again next year!
© 1981–2023 High Speed Productions, Inc.