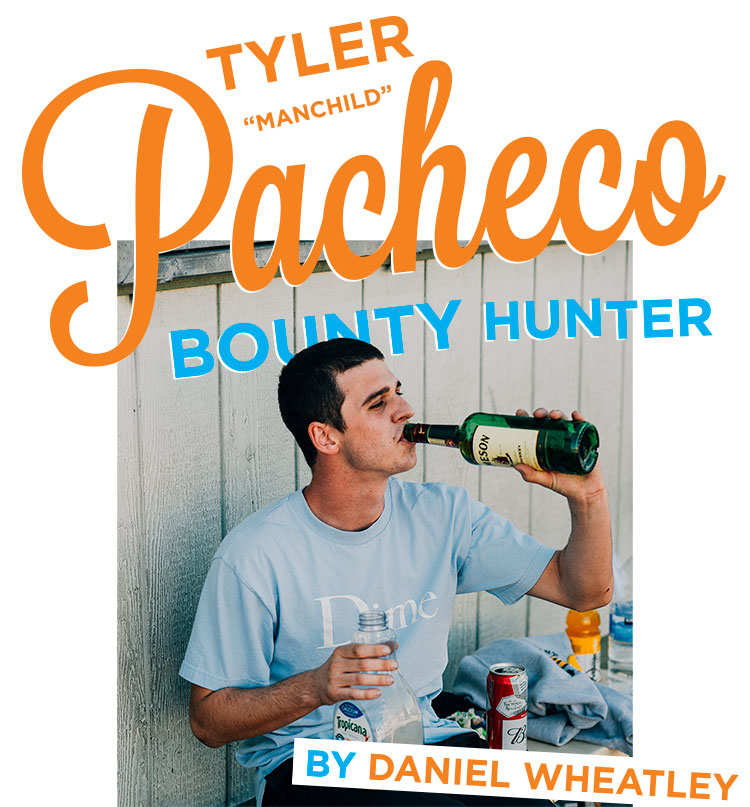 What’s been going on, Tyler?
About to play Mario Kart.

Is this your first Thrasher interview?
Pretty much.

So with The Flare coming out so soon, your first video part in a big company video ever, all kinds of firsts for your skate career, Thrasher wanted to know one thing.
What’s that?

Tell us why you gave up the dream of being a professional bounty hunter.
Ha! 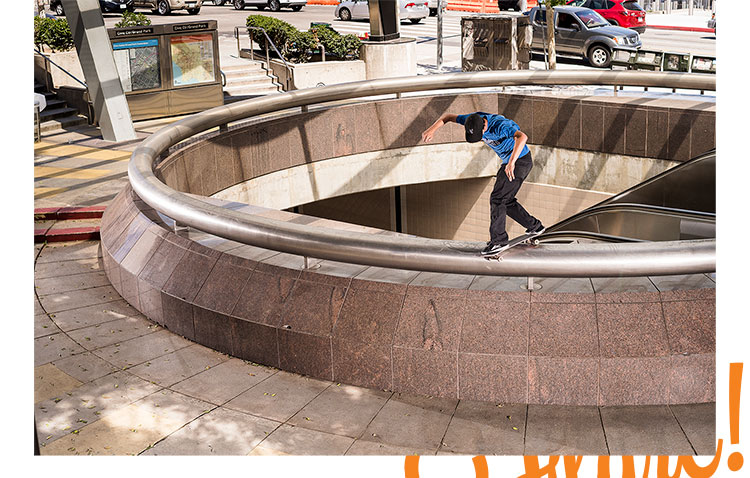 Manchild the bounty hunter has a sick ring to it. Oh well—frontside hurricane DTLA     Photo: Hammeke

This is the best story I’ve ever heard  you tell, and you tell some epic stories. Give us the full rundown. You actually went out and tried to bounty hunt someone, right?
So I was working. My friend’s mom got me a job watching this guy’s two dogs. I was watching them for 100 dollars each. He was kind of a scary fuckin’ dude who just got out of jail. Then when he got out, instead of being hood and doing hood shit, he decided to start catching the hood dudes.

Wow.
Pretty much. And then fuckin’ I would watch his dogs while he would go out bounty hunting. And then one day he’s, like, “I’ll give you 500 dollars if you go with me this weekend to get this dude.” So we frickin’ drive to Santa Barbara or some shit and he phones the police and tells them, “Yo, I’m a bounty hunter. I’m here to pick up so and so. It’s me and my accomplice,” and his accomplice is me, and I’m like fuckin’ 15. We get out of the car and he hands me a bulletproof vest that says “Police” on it and a Taser and a flashlight. So he’s, like, “You get in the backyard and I’m going to bust through the front, and if he tries to run out the back you gotta get him.” So I hop this guy’s wall and walk toward the backyard. Then, all of a sudden, he’s got these two fat pitbulls. The bounty hunter asks me if I’m in position—

So wait, are you guys on walkie talkies?
No, he just yells this to me. And then tells me to run in the front with him. The bounty hunter kicks the front door in and we walk in. It’s like a fuckin’ family and shit and he goes upstairs and gets the dude. The dude’s yelling, “Nah, I don’t want to go!” So the bounty hunter says, “Yo, it’s either my way or the highway. Nah, fuck that. It’s my way. You’re coming with me!” Some gangster shit. 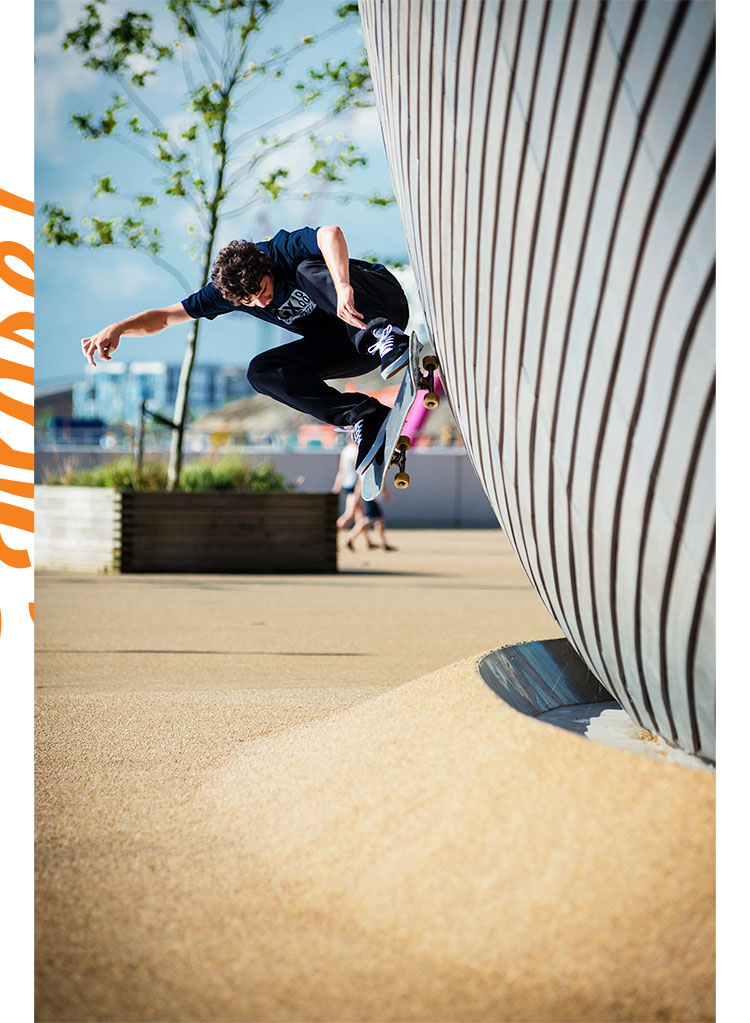 Tyler smashes some nose on a bank to ball—way chiller than giving a child molester your phone number     Photo: Zaslavsky

What made you decide not to do it again? Wasn’t the money good?
It was too sad. I never wanted to experience that again. To see the whole family crying and shit. Yo, fuck that story; this is the one we should use.

Okay.
So another time the bounty hunter said “I’ll give you $800.” This was the big one, the big score. So the bounty hunter tells me, “There’s this dude who’s a child molester and the way he covers it up is he says he’s a talent scout.” So this guy says he casts kids for commercials and shit. So the bounty hunter makes me hit this dude up on my Facebook, like, “Yo, I’m Tyler.” It was the weirdest shit. He told me to tell the guy I’m an amateur skater and I’m trying to get a role in something. This is before I had any sponsors.

So how old were you?
This was all when I was, like, 15. So I hit the molester guy up, tell him I want to pursue a career in acting and all this shit. This guy hits me back right away. He’s, like, “I want to meet you in person. Can I get your number so I can contact you easier?” So I tell the bounty hunter, “Fuck no, I can’t do this.” And the bounty hunter is, like, “If I’m giving you 800 dollars you have to give this guy your number.”

Oh my God, dude!
And the bounty hunter is this big-ass motherfucker! Dog, this guy is scary as fuck. So I’m like, fuck it. Eight-hundred dollars for me at that age was, like, “I’m rich.” So I start talking to this child molester again and he tells me, “I want to meet up with you and help you out, but don’t bring your parents.” So off that shit alone, you know the motherfucker is sketchy.

Completely.
So I tell him to meet me at this diner. So he goes, gets there, gets arrested, but I never hear about it for, like, years. And this is long after I stopped working as a bounty hunter. Dude, years later I get a text message saying “Is this Tyler?” I say, “Yeah, who’s this?” It’s the fucking guy! He had just got out of jail. He’s yelling at me, like, “You fucking snitch, you sold me out! You sold your soul to the Devil! Fuck you!” And I text him back, “Yo, I’m still trying to kick it if you’re down.” 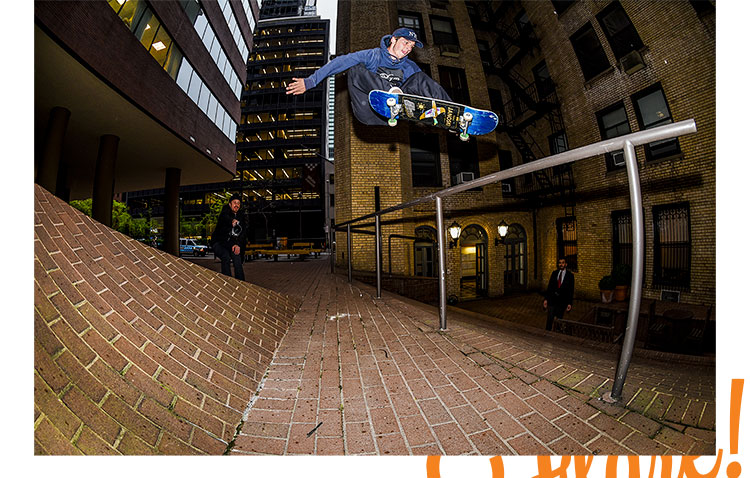 Security lurks while Manchild leaps. Off the bank and over the rail in NYC     Photo: Mehring

No way!
Yeah, and that was the last I heard from him.

That story is unreal, dude. Did you ever think you might have been seriously injured trying to bounty hunt?
Well, fuck. The first time I did it I didn’t even know what bounty hunting was. I don’t know what I was really thinking about it. I just heard how much money and was, like, “Fuck, dude, I’m down. I’m only making 100 dollars a dog, might as well go make 800.”

Does your mom know that you were a bounty hunter?
I don’t know if I’ve ever told her. I don’t know if I ever mentioned the whole child molester thing. Nah, I for sure have never told my mom this, because she would trip the fuck out. For all she knows, I was watching dogs the whole time.

What would you tell someone looking to get into the bounty-hunting game?
You better run fast! Dennis Busenitz would be a good bounty hunter, I think. 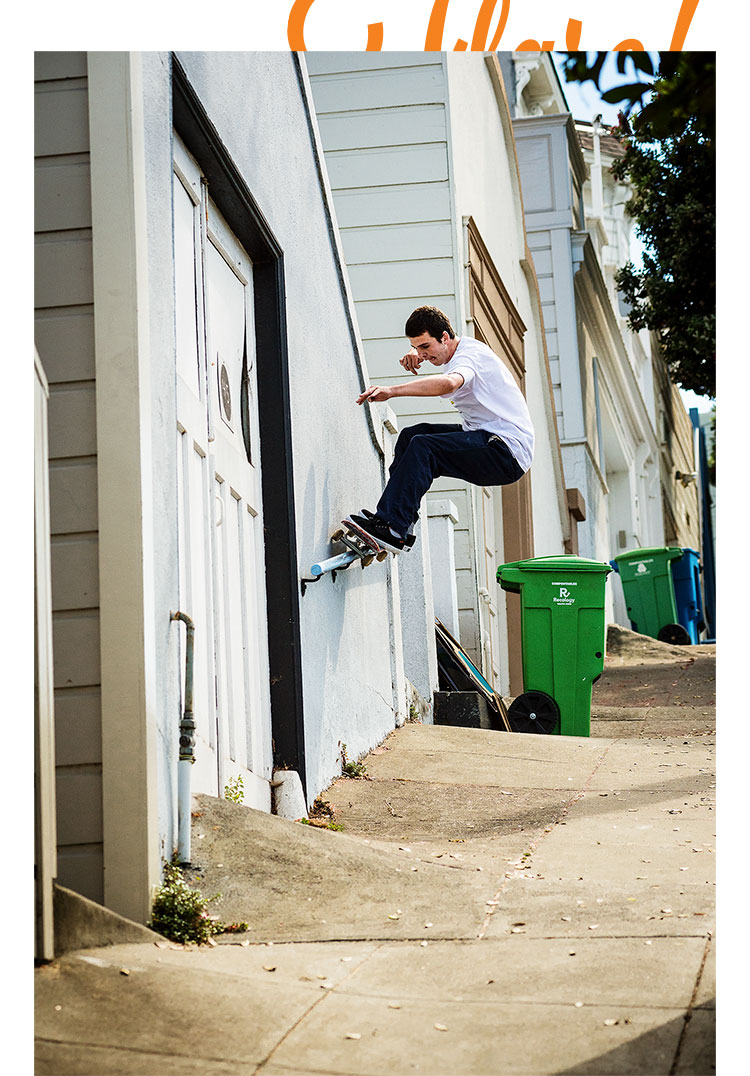