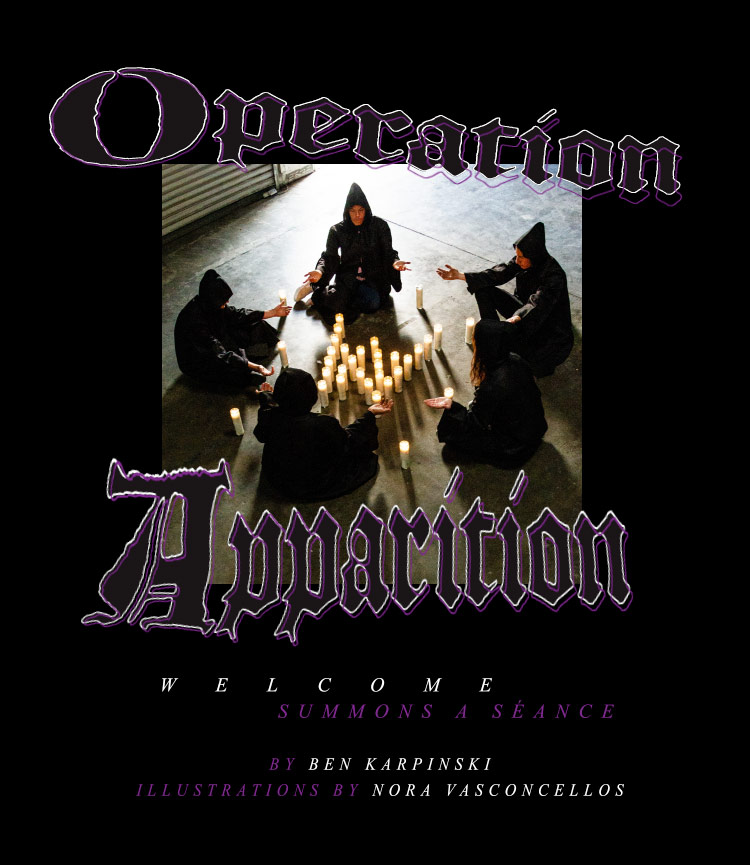 Do you believe in the afterlife? Are you haunted by things that go bonk in the night? Are you living with one foot in the real world and one in the paranormal zone? If so, perhaps you should join Welcome on their journey to summon a Séance? Let’s lift the veil to the spirit realm and conjure up something spooky in the name of skateboarding. Light a candle, grab your robe and hold tight! It’s about to get otherworldly up in this MF! Don’t say we didn’t warn you. 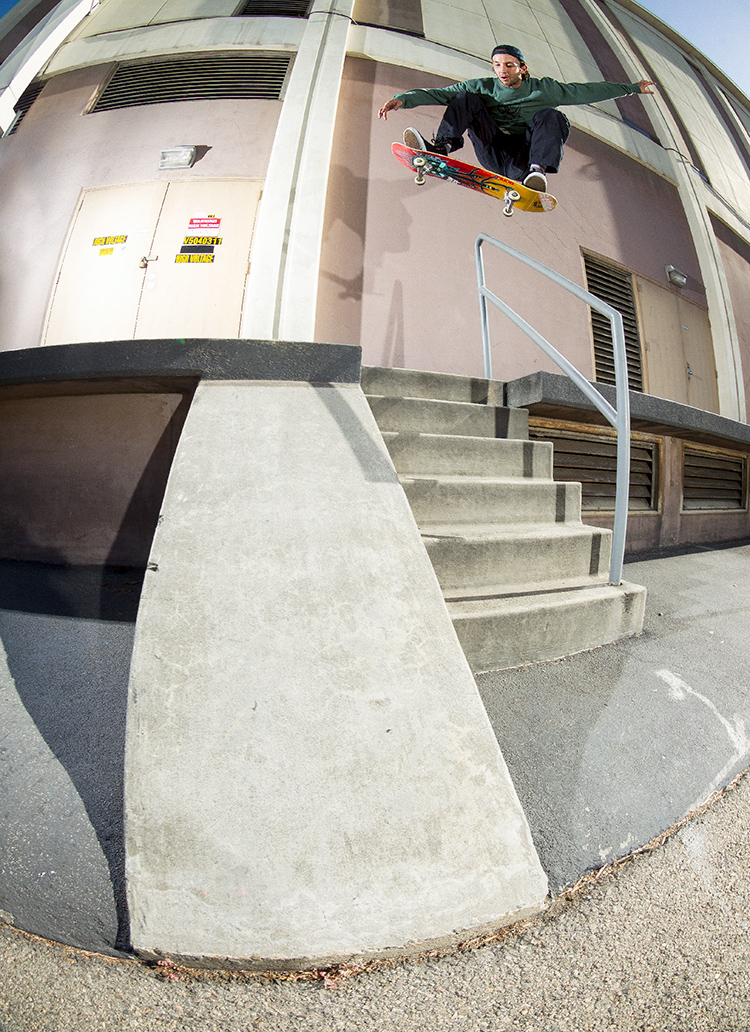 Ancient alchemists sought to create an elixir of immortality. Ryan Lay knows all you need is skateboarding to stay forever young—switch 180 into the bank 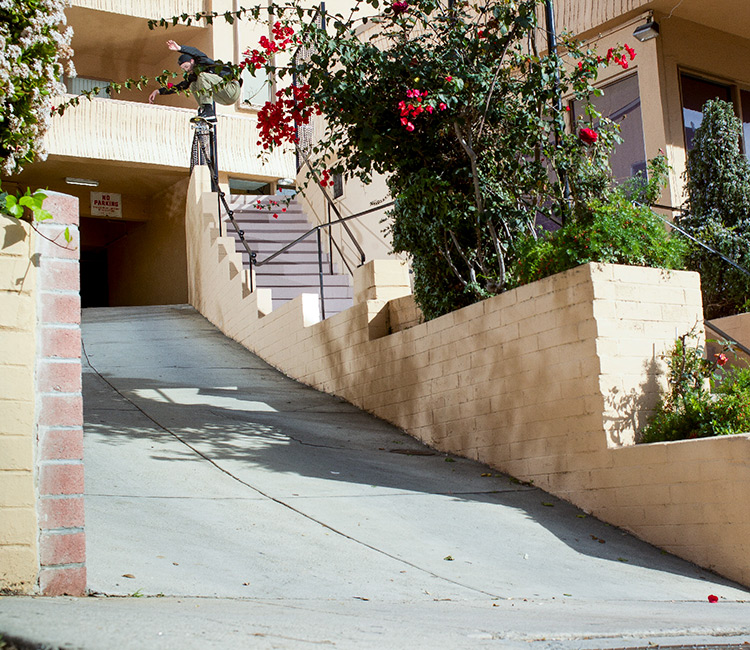 A nagual is a human being who has the power to transform either spiritually or physically into an animal form. That explains how R-Lay is able to soar like a bird—nagual-powered ollie 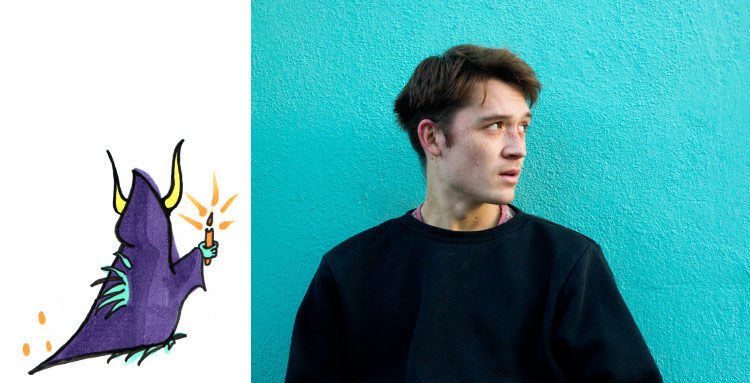 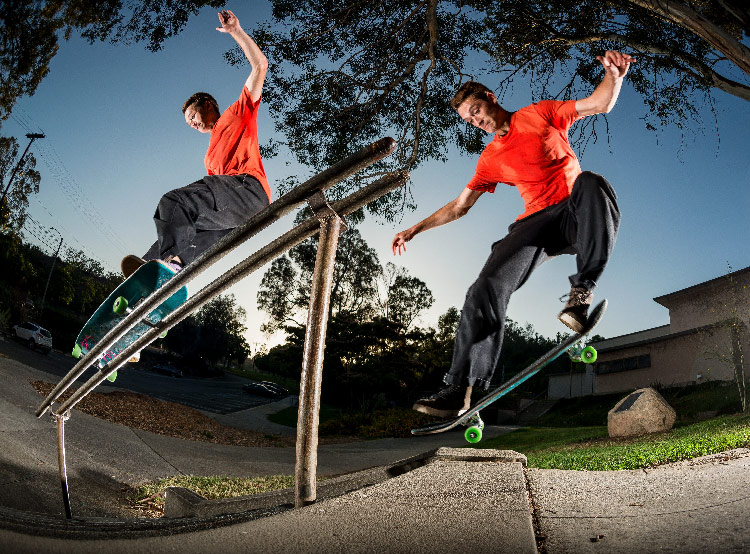 Despite his claims to the contrary, Jason Salillas’ wheel bonk to 50-50 is a classic example of supernatural levitation     Photo: Seidler

Bend, Oregon—Jake Selover’s hometown—was on the path of totality during the 2017 solar eclipse. Side effects of those who witnessed the phenomenon include skating corners of skateparks that don’t actually exist. Floating kickflip to fakie at Irregon, OR. Thanks, Monk 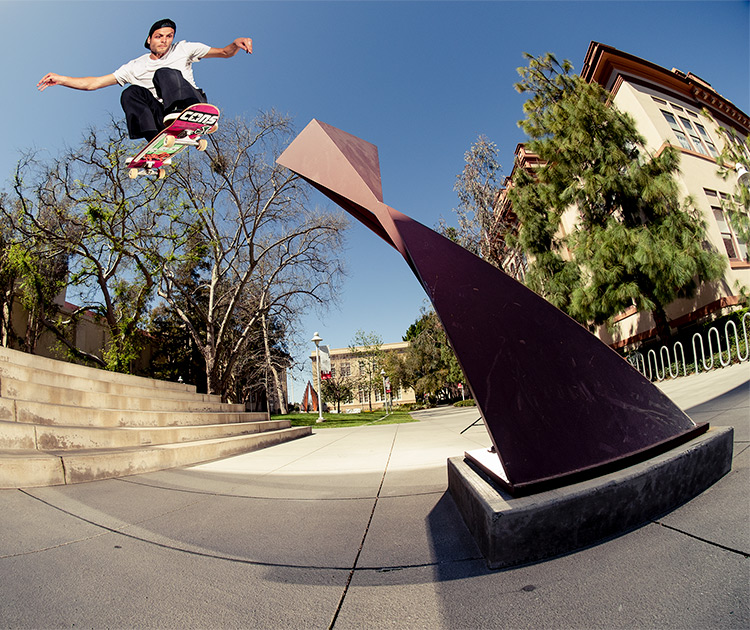 If Ryan Townley had sliced himself in half on this ollie to sculpture ride, the séance could’ve been with him 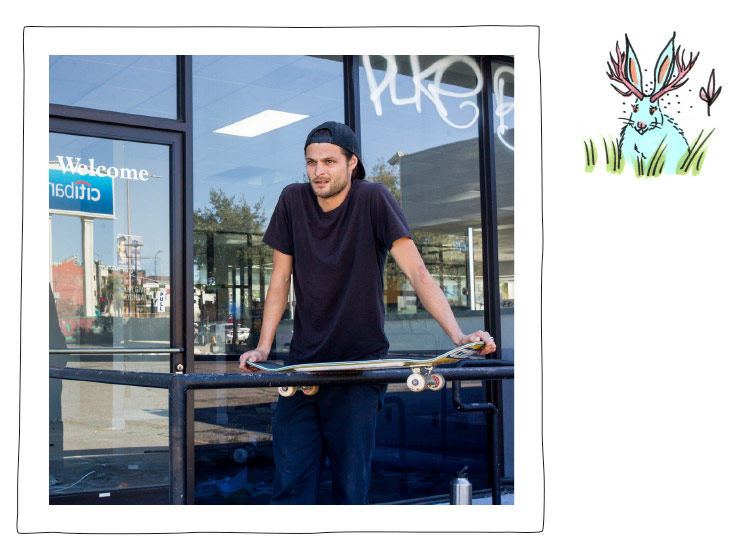 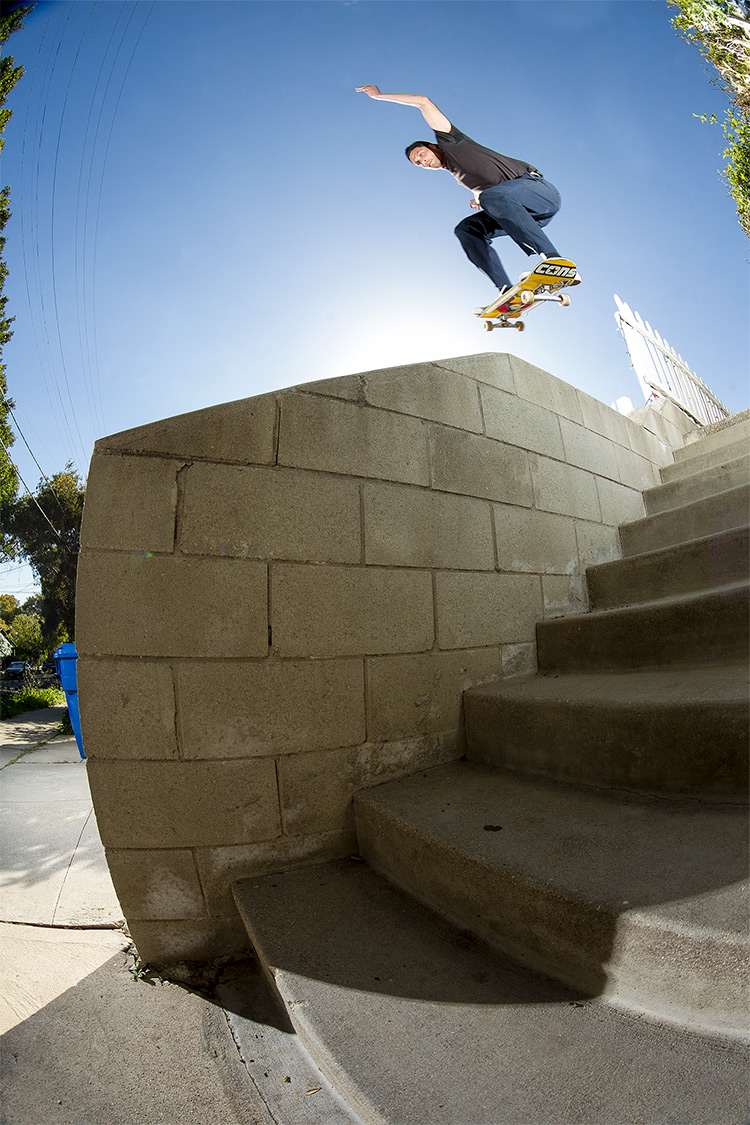 Cross over, Ryan. All are welcome. All welcome, go into the light. There is peace and serenity in the light. Gap to lipslide

It’s impossible to think about Welcome without envisioning their graphics and atypically-shaped boards. We hit up Jason Celaya, Welcome’s Minister of Magic, to see what’s good with their wood. —Michael Sieben

A lot of Welcome graphics deal with the occult. Do you believe in that stuff or do you just think it looks cool?
I believe in science. I’ve just always been attracted to that type of imagery because of my mom. She was always really intrigued by dark stuff and the supernatural so I grew up with it and there’s a certain sense of nostalgia to seeing that stuff and putting it out there.

Did your mom believe in ghosts or otherworldly things?
Yeah, she was definitely all about it. I had lost my brother at a pretty early age so I think that was one way for her to hold on was to pretend or believe that his ghost was still around. She was Christian but she believed in all the other stuff on both sides. 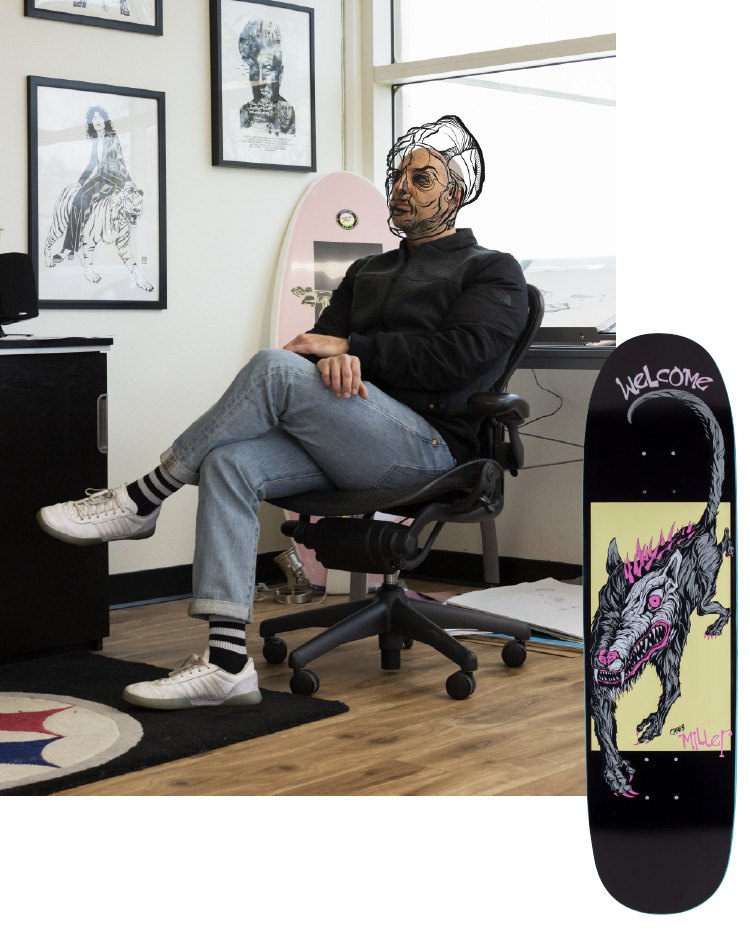 Is it true that you hadn’t drawn anything since high school but began drawing again after starting Welcome?
That’s true. With the exception of one angler fish that my son asked me to draw at some point. I would also doodle on whatever was in front of me whenever I was in meetings for work. That said, no serious attempt at something that wouldn’t be thrown away when I was done with my notes.

What was the first Welcome graphic that you drew?
The owl graphic. It’s got a little pocket on it. Actually, all of the owl graphics I’ve drawn have that on them, I think. I remember a lot of the first graphics were done with a Sharpie because I didn’t know what to use to make graphics.

Have you noticed your drawings getting better over the years?
Yes, definitely. You can’t even tell it’s the same person in some instances.

Why do you think kids are so drawn to Welcome’s aesthetic?
I think because I have not grown up mentally from the time I was 16—a least in my aural and visual tastes. 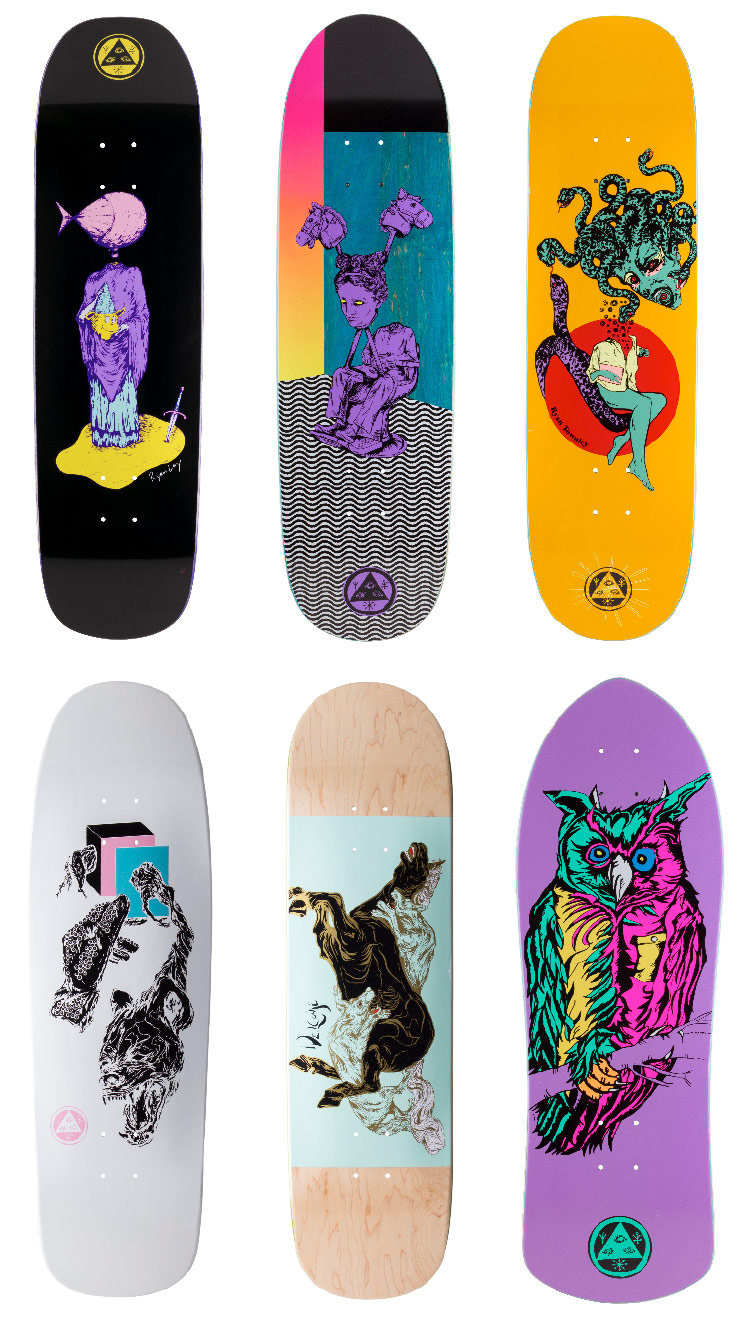 What’s been your favorite graphic to date?
Probably something new. Let me look at our website. Actually I’m looking at it now and I don’t like anything. It’s terrible. Ha! Just kidding. Actually, I like the 20 Eyes board and the Ryan Lay Light-Headed graphic.

What’s wrong with popsicle shapes?
Nothing. They’re fully functional but everybody’s got them so why would you need one from us? We actually made them in the beginning, which is really funny and most people don’t know that. We made them along with the shaped boards and had a hard time selling them so from that point on I was like, I’m not gonna make them. And as we kept growing it was, like, if it’s not broke, why fix it?

What’s your favorite non-Welcome graphic?
Anything from Stefan Narancic—the guy from Polar. He’s my favorite artist, for sure.

What do you dislike about most contemporary skate graphics?
I really don’t like the fact that everything is collaged graphics and that everyone sees one thing that sells and they all do the same thing. Not many brands have an individual style anymore, it seems.

So you don’t believe in the occult, but what’s your advice for finding a little bit of spirituality in this bleak world of ours. How do you keep your head above water?
Focus on doing things that create good energy in the world. 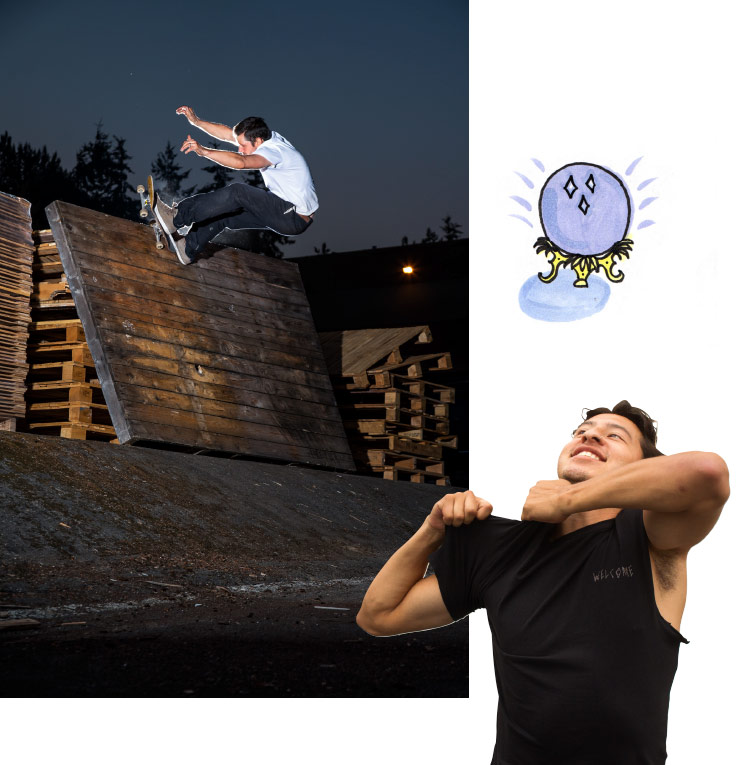 Jordan Sanchez performed an incantation on this palette, transforming it from a piece of junk into a skate spot—frontside 5-0     Photo: Valdez

Like his UFO footage, without video documentation of Daniel Vargas’ body varial to tailgrab nosegrind, skeptics will say it never happened 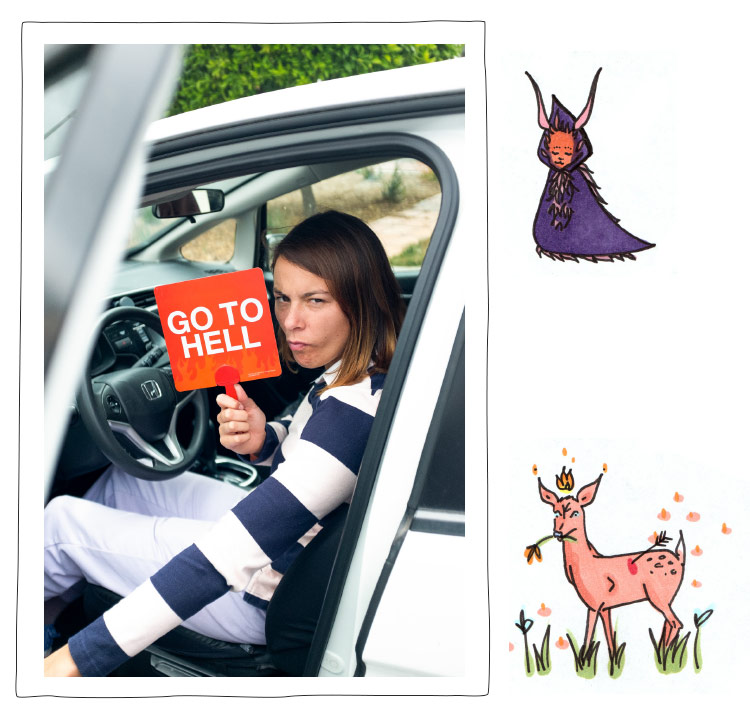 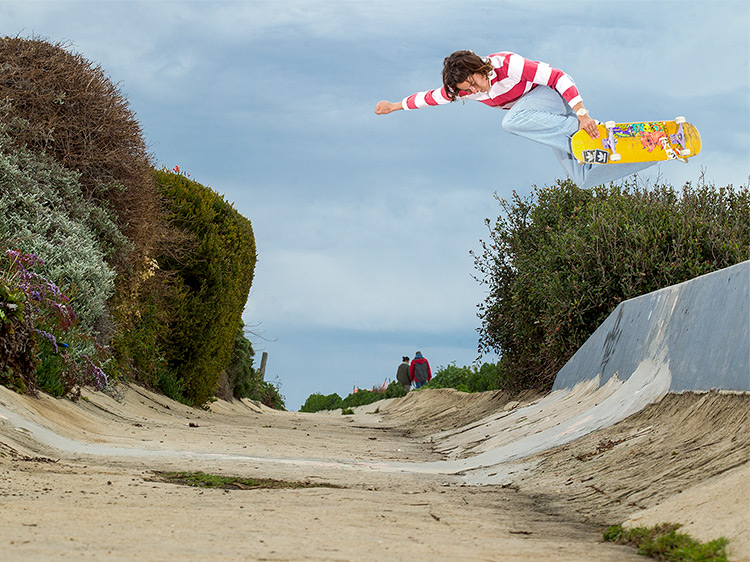 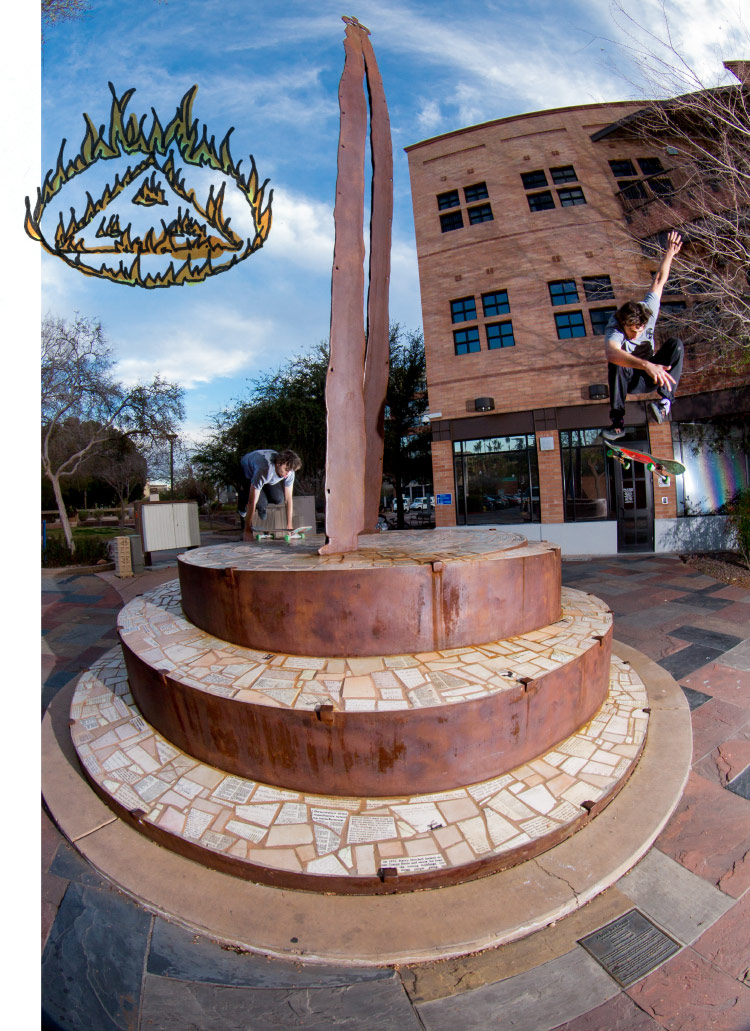 A frog hop to hardflip is a totally sufficient offering to the chalice too. Will Blaty fills the cup 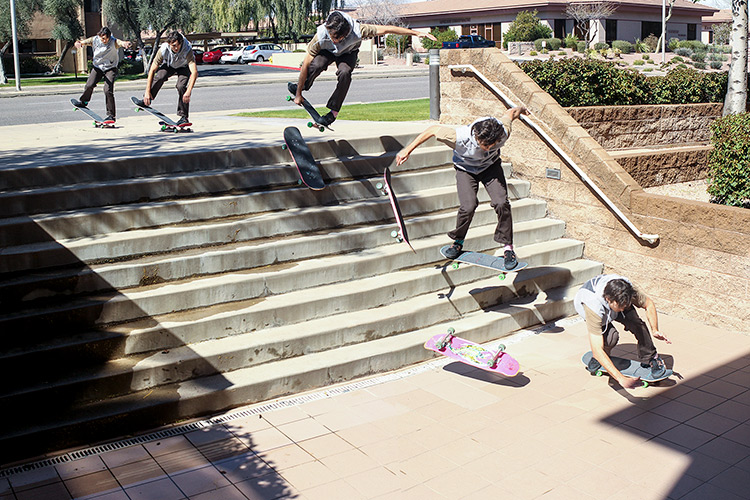 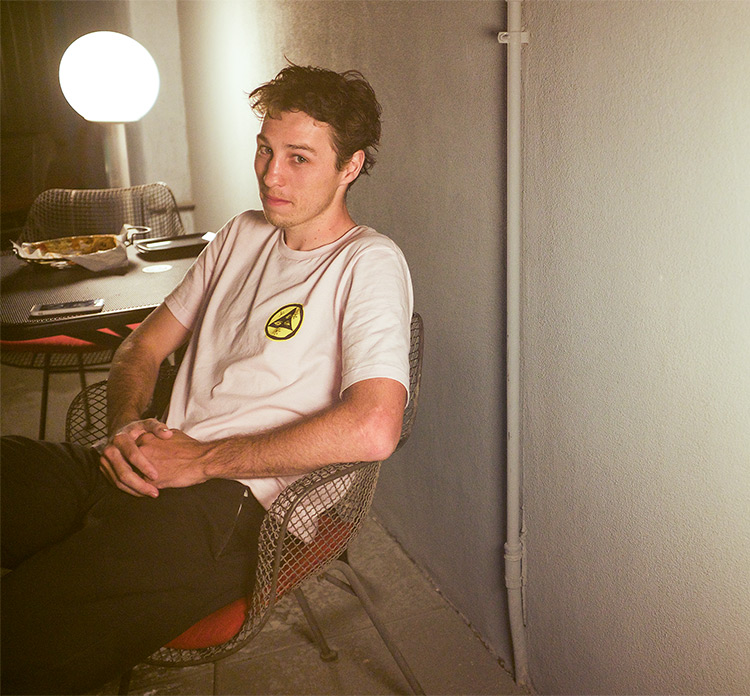 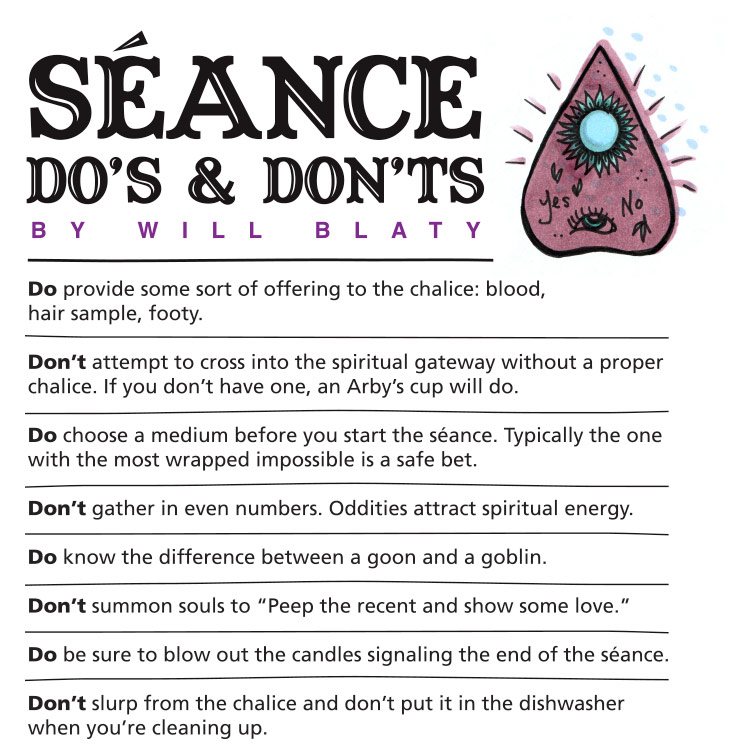 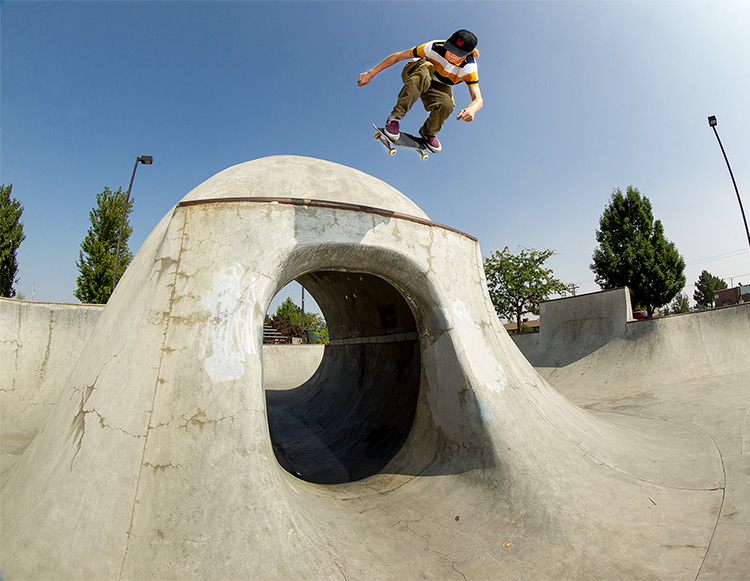 Roman is taking this whole channeling thing a little too literal. BSO over an interdimensional portal in Irrigon 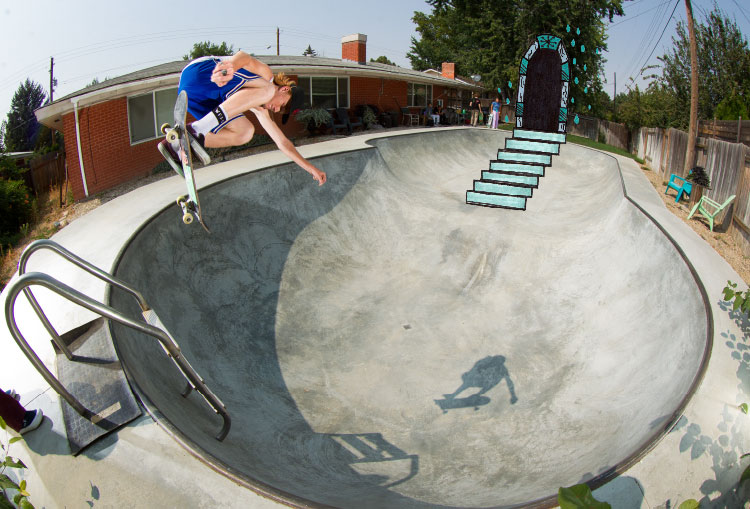 Summoning the positive vibes of the spirit world, Roman Pabich gets high with backside pop shove it over the ladder at Boise Blake’s 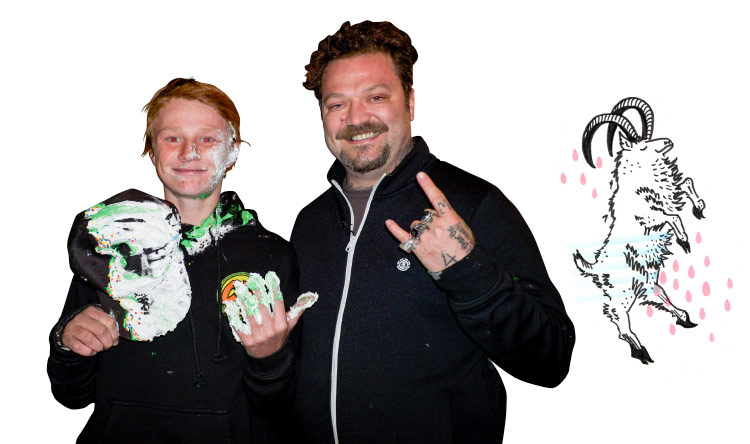 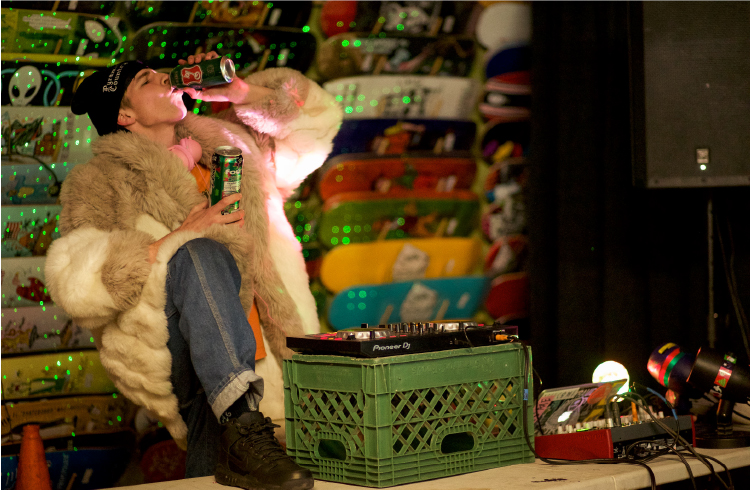 In addition to being a desert-dwelling skate rat, Aaron Goure is a prolific rapper, producer and DJ. We hit up Doctor Thraxxx to find out what’s popping off in Tempe.

Have you ever been in contact with the spirit world?
Not necessarily, but I did shit my pants in a Spirit Halloween store a couple years ago.

Spooky enough. If you could pick one person to talk to on the other side of a séance who would it be?
Nate Dogg.

What would you ask him?
I’d probably ask him to hit a hook on this track I’m working on. 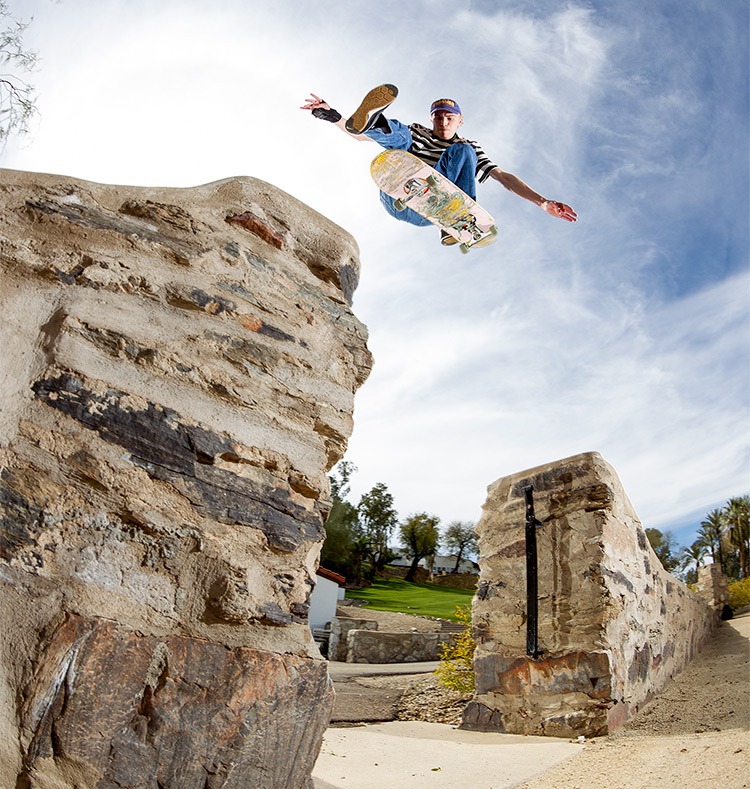 You gotta be one of the most prolific rappers to ever grace Tempe, AZ. Can you give me a rundown on all the different titles you have recently put out?
I’m going to have to correct you on that one. Although I do appreciate the compliment, Big Fat Hikaru is definitely the most prolific rapper Tempe has ever seen. I’m very lucky to have got him signed onto the Thraxxx City Entertainment label before he really blows up. But that aside, some of my favorite Thraxxx tracks include: “No Lights, No Camera, Just Action” featuring Buck Einstein. It’s a straightforward baby-making soul track. My favorite Buck Einstein lyric from that one is probably “Use your tonsils as a punching bag, with my hairy nut sack.” Another classic Thraxxx track is “Battery Pack” featuring the Bakery Boys—aka the Welcome team. That track’s basically about the bad decisions you make after taking down a three-pack of tall cans—a battery pack. And then you got a personal favorite of mine, “Dick Doctor.” That one is pretty self explanatory, I think.

Have any of the tracks been in skate videos? How do we find them?
A couple of my beats got used in one of the Pyramid Country Igloo Mixtape videos, but other than that not really. It’d be sick if someone did skate to one of them, though! Most of them are on my Soundcloud. If you search “Dr. Thraxxx” it’ll come up. They’re all pretty hectic. Basically I just started bringing my recording equipment on skate trips and recording all of the homies who are least likely to rap and then I just try to make them sound as good as I can.

Which skaters have surprised you?
Kevin Braun, the most beast skater and he has crazy bars. He might be one of my favorite rappers in general—skateboarding or not. Brockel is hilarious too. He gets real fired up. We have a track with both of them and Big Fat Hikaru called “Moisture Piece” that goes off.

Who has the best rap name?
Buck Einstein is probably the most fire name in my opinion. That’s Jackson Casey’s.

How many aliases do you rap under?
Well, Doctor Thraxxx is my main one for producing. I also have Lil 6 Shot Shooter for our Trailer Trap songs. Which, for the record, we made “Giddy Up” before all these other rappers hopped on the country vibes. And then DJ Freako is my DJ name. Some of my close friends also call me Thraxxximundar.

Do these personas come with their own wardrobe or do you always leave the house in a fur coat?
I just like to wear a lot of random stuff so any excuse to throw on a cowboy hat or a fur coat sounds good to me.

You went to school for this, right?
Yeah, I went to this trade school for audio engineering out here in Tempe. It was pretty sick. My laptop and recording equipment were included in the tuition so I just started recording the homies when we’d be kicking it and it ended up becoming my favorite thing to do besides skating. I would love to branch out and have some people who actually rap jump on some of my beats. So if anyone out there trying to fuck with some Thraxxx, hit me up! 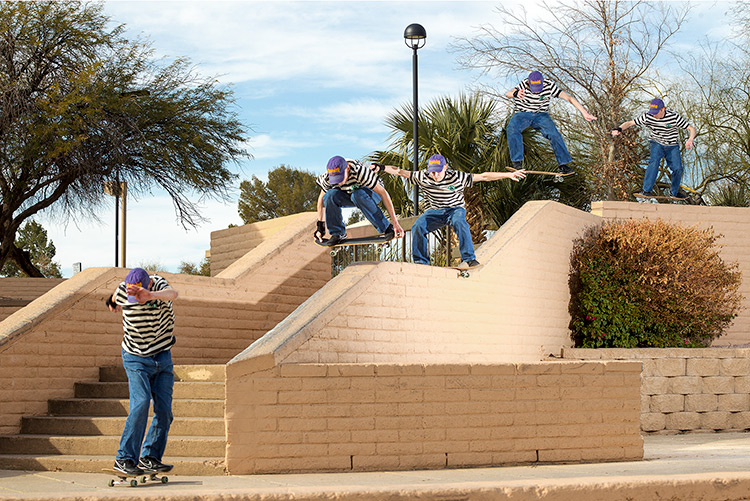 Not a hoax! Goure summons the powers of the Skate Gods and conjures up some magic at The Wedge—ollie to boardslide to cannonball hop. The Séance was a success!