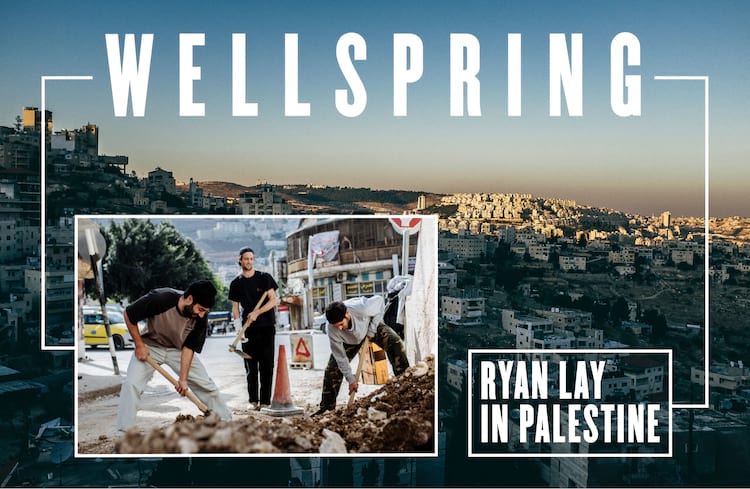 From inside the hospital, we heard muffled, agonizing screams and one by one patients walked out with beads of sweat on their foreheads. After I finally made my way into the doctor’s office, a few brief words in Arabic were spoken with my friend Aram Sabbah and the doctor began wrenching my bone like Play-Doh until my broken finger was mostly set straight. 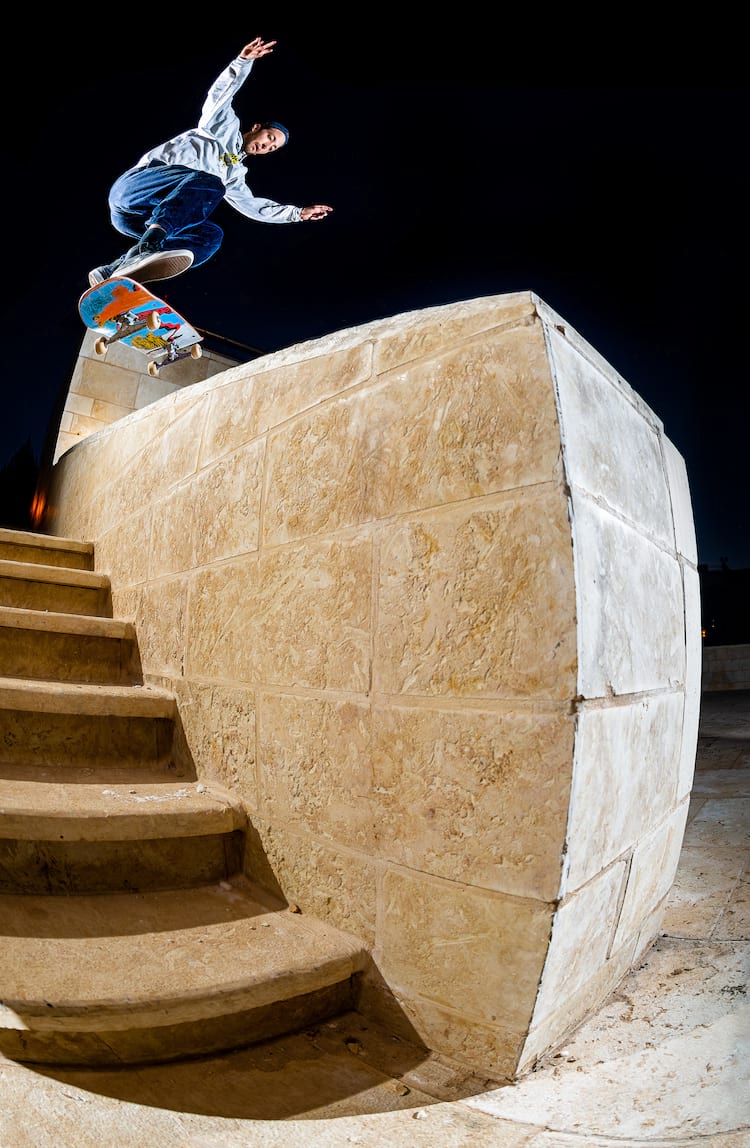 Switch shove 50-50 on one of many perfect, unskated hubbas in Palestine     Photo: Seidler

Let me rewind briefly—midway through our trip to Palestine, we found cover from an evening rain at an indoor shopping mall with a perfect marble double set. Not only did nobody care that we were pushing around, but one of the shopkeepers even turned the lights on for us, unfolding a chair and taking a seat as if he were don of the double set. This kind of unknown generosity from strangers was shown to us multiple times a day in Palestine and it’s really impossible to overstate how disorienting and rad it felt. So we had our go at the double set and too many tries into a switch tré flip I found myself lying at the bottom of the stairs, my pinky finger bent all the way back into my chest. After the standard freak out (having never dislocated anything), I mostly popped it back in and we headed to the hospital. 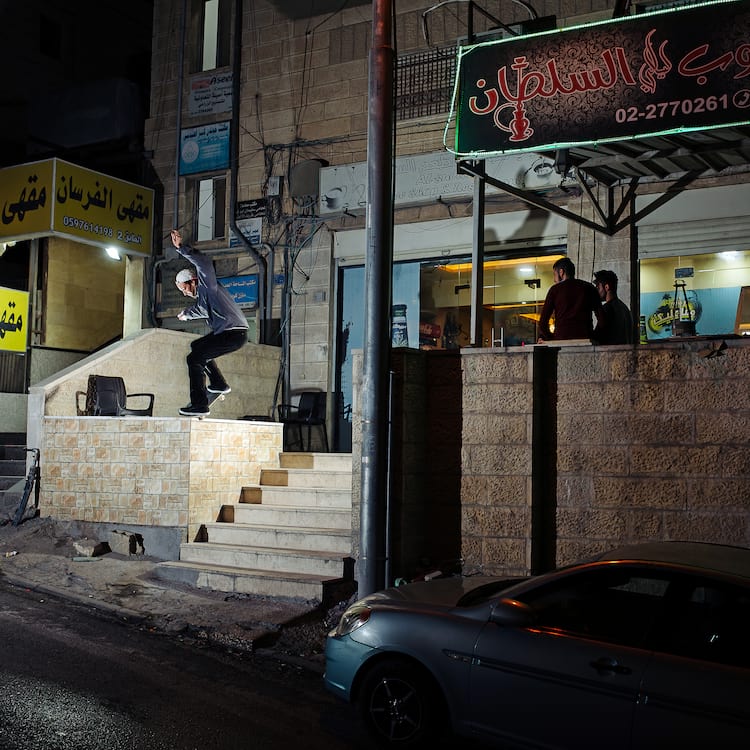 Skate to the bar? Nah, skate through the bar. Nosegrind with the help of some Palestinian hospitality. Try that in the States     Photo: Le Gall 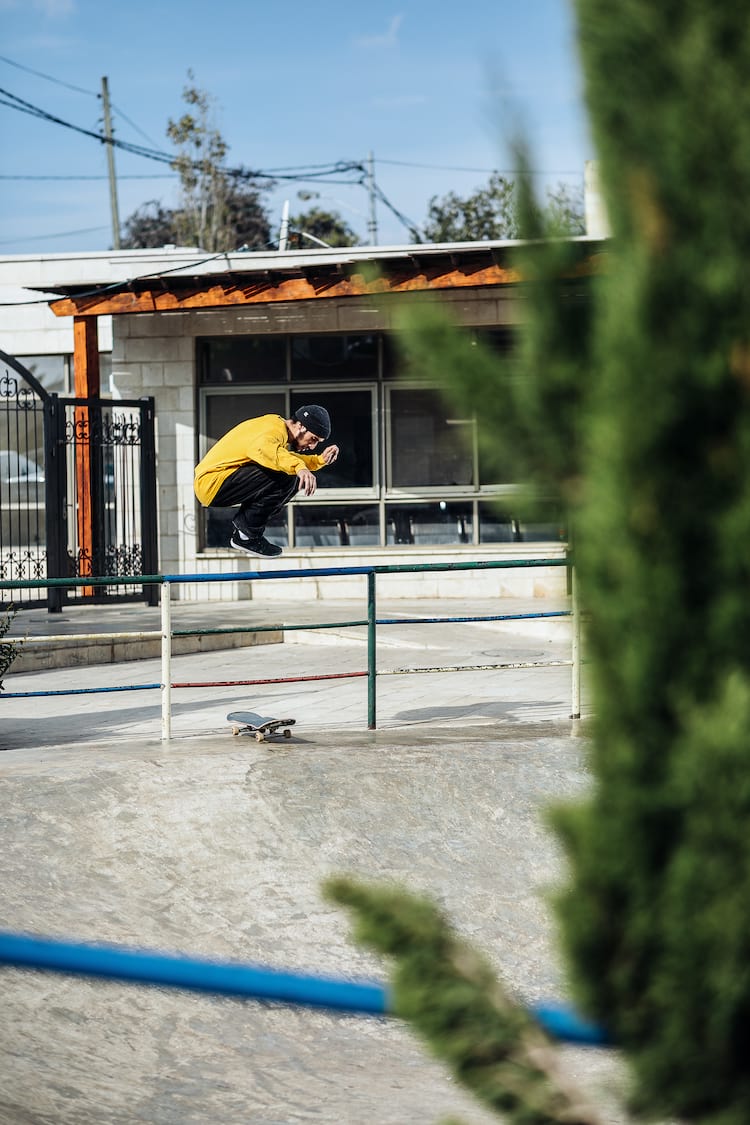 All the younger skaters in Palestine took cues from Aram who can seemingly hippie jump anything in his path     Photo: Seidler

Honestly, although excruciating, this experience was much better than the slow wait and anticipation I’m used to in ERs back home. We paid roughly $30 for an x-ray, set and cast and then we were on our way. I spent the next two weeks trying my best to channel Salman Agah and make the most of our trip to Ramallah, checking out the growing scene in a place where skating didn’t even exist 15 years ago. 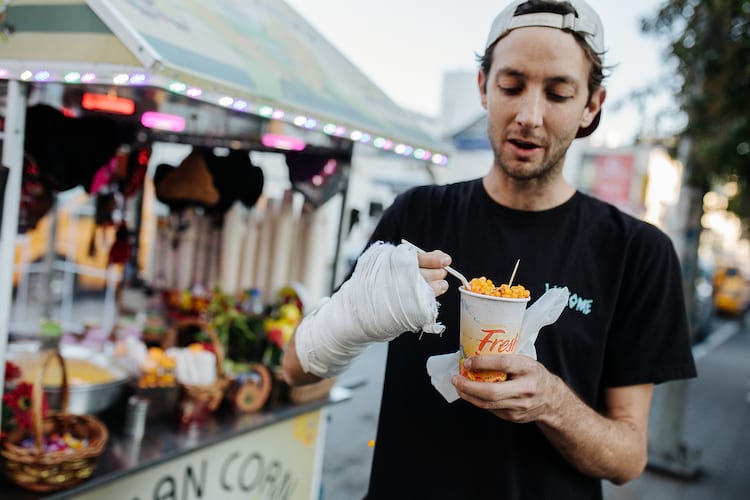 Chanelling Salman and Making the most of it     Photo: Le Gall

This was my second trip to Palestine. I first came here in 2018 out of my own selfish curiosity. I wanted to connect with skaters engaged in liberatory movements, to see what role social skate projects could play in that struggle, and mostly just to learn and take inspiration. That first visit really shook me. It left something nagging in the back of my mind. I had made some incredible friends and, honestly, skating felt like a fresh spring here that you could just tap into.

On both visits I linked up with some skaters who run a nonprofit called SkatePal, including Maen Hammad and Aram who were our skate guides on this mission. The organization’s goal is to support the youth of Palestine, enhancing their lives through skateboarding. Maen encapsulated their ethos by telling me, “Palestinian skateboarders are pushing borders, reclaiming freedom of movement and prioritizing the development of a healthy self for their collective in the face of further sidelining. Its importance is far from a fluffy liberal claim like ‘skateboarding is going to free Palestine.’ Palestinian skaters, including myself, would not buy into this. However, there is truth in the power that skateboarding can very much be a part of Palestine’s collective liberation.” The work they are doing is exhilarating and full of hope and I have nothing but gratitude for them and the inspiration it’s given me. 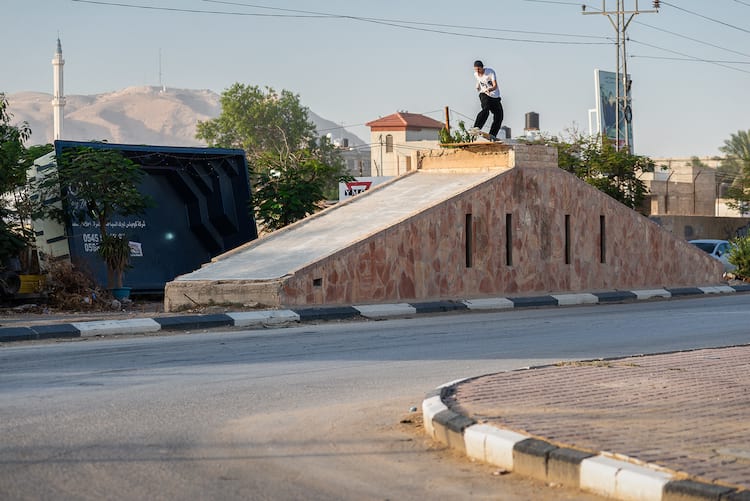 No clue what this structure was actually built for, but it's in the middle of the highway on the way to the Dead Sea. Some carpenters nearby hooked us up with wood and stone to help with the run up for 180 to fakie nose wheelie     Photo: Seidler

It’s hard to describe what a miracle skateboarding feels like in Palestine. One of street skating’s very best qualities is its unique ability to give new and meaningful context to our surroundings. There are few places more emblematic of that process than the West Bank, where a new scene of skaters is currently popping up. Getting into the West Bank from Jerusalem as a tourist requires a bus trip through a military checkpoint—a massive cement wall built by the Israeli government, and a kind of no-man’s land separating Israel from the occupied Palestinian territories. Most Palestinians, including many of the skaters we met, are rarely granted the permit needed to cross over, and few have seen the sea just 60-or-so miles away. 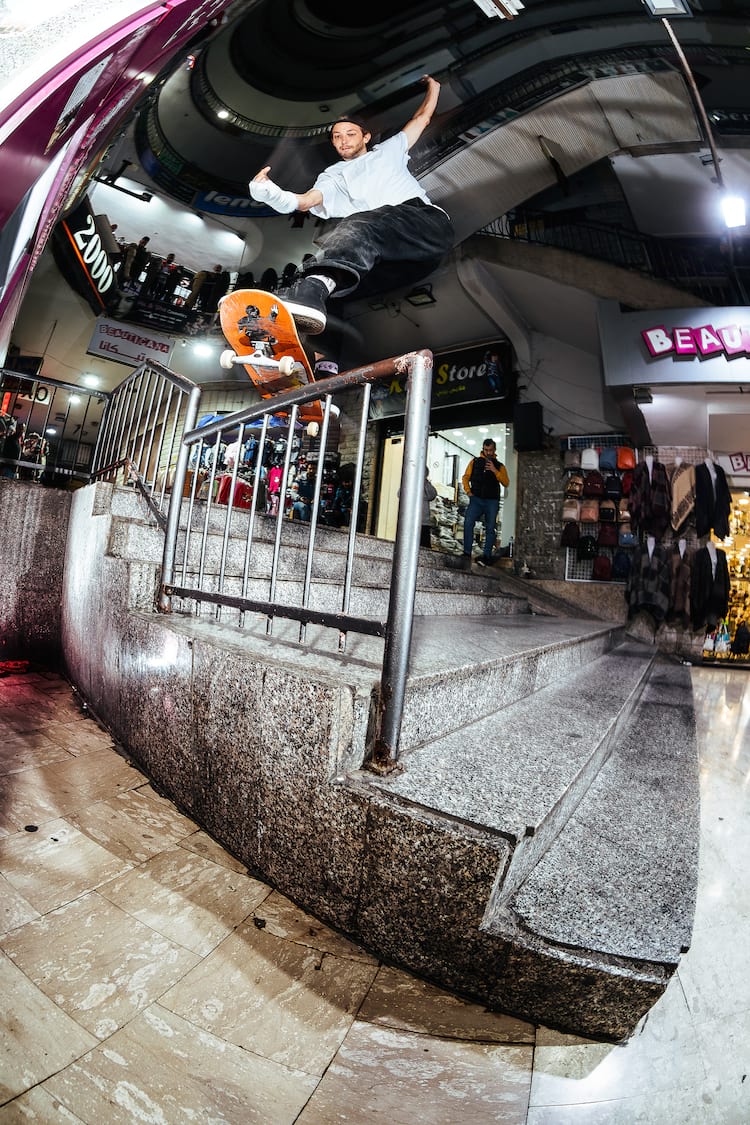 The storekeeper, who had seen me break my finger the prior week, turned the lights on for the double set and helped us clear the runway so I could get this nollie front board. Definitely preferred the hospitality to the hosptial     Photo: Le Gall

This is the reality for skaters like Aram of SkatePal, with myriad daily inconveniences such as limited water and frequent power outages. With over 100 Israeli settlements—essentially heavily-guarded gated communities—scattered throughout the West Bank, a simple drive to neighboring towns often results in frequent detours and checks by armed Israeli Defense Force soldiers. If you think dealing with rent-a-cops is bad… 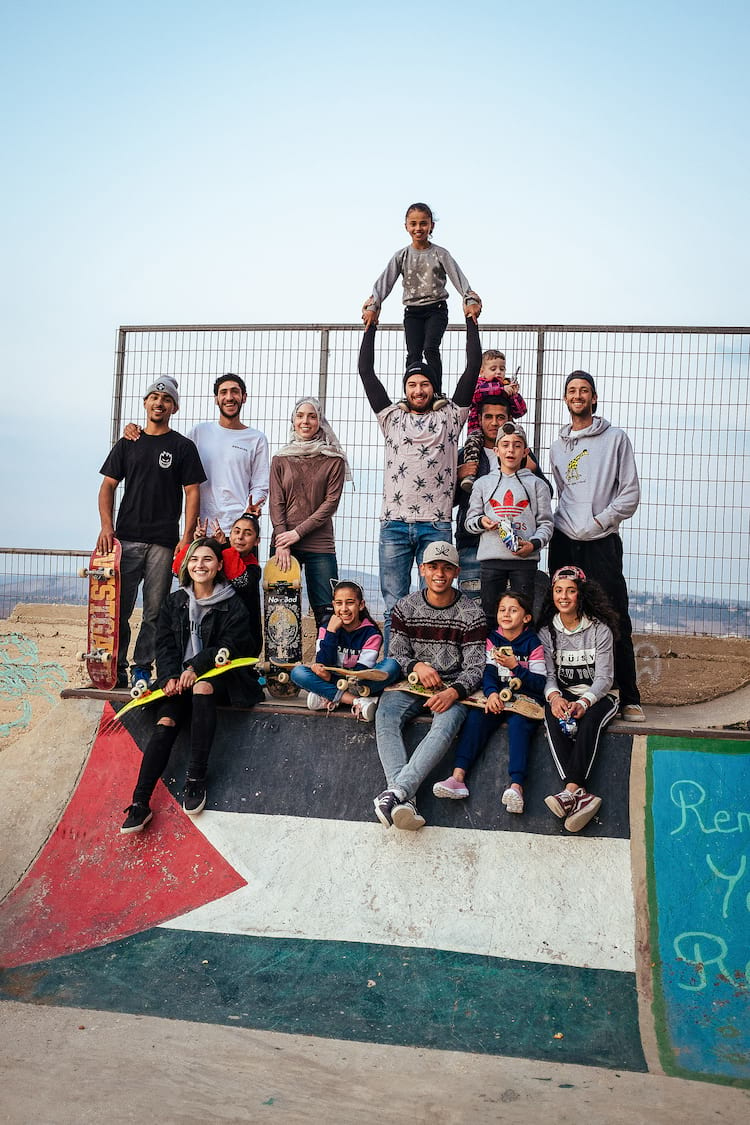 Just a small fraction of the amazing volunteers and participants at SkatePal      Photo: Le Gall

Aram and Adham Tamimi were among the very first Palestinians to start skating less than ten years ago. Since then, with the help of SkatePal, a couple of skateparks have been built in the villages of Jayyous and Asira ash-Shamaliya and a small program at a basketball court in Ramallah has popped up. The purpose of the parks and volunteers, according to Aram, is to build a skate scene—not train kids how to skate. There are now dozens of skaters scattered throughout the West Bank. 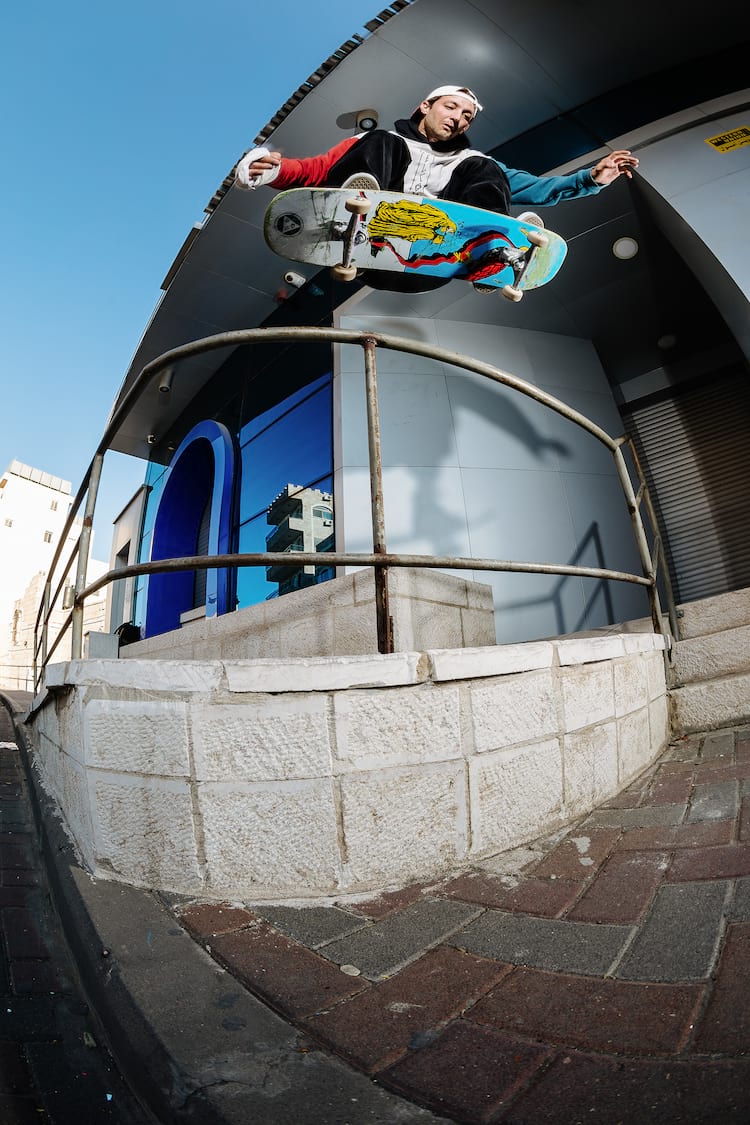 Bethlehem, birthplace of Jesus and also home to a decent bump to bar for a nollie     Photo: Le Gall

Our trip, with the help of Aram and Maen, mostly consisted of searching for spots, on foot, on the crowded and hilly streets of Ramallah. I was here doing the same shit I’ve done everywhere else—making some new friends and skating new spots per the advice of Aram, who encourages people to come to Palestine not just to volunteer, but to go skate–that’s the goal.

As a huge surprise to anyone who’s tried to skate private property on a weekday in the States, we were often met with general curiosity and enthusiasm. Multiple times throughout the day, shopkeepers would help us carve out a space to land or run to a friend’s shop to find a piece of wood we needed for a runway. In Bethlehem, the owners of a hookah bar literally let us skate through their bar to get to a perfect out ledge—all while Aram smoked hookah and watched for cars. 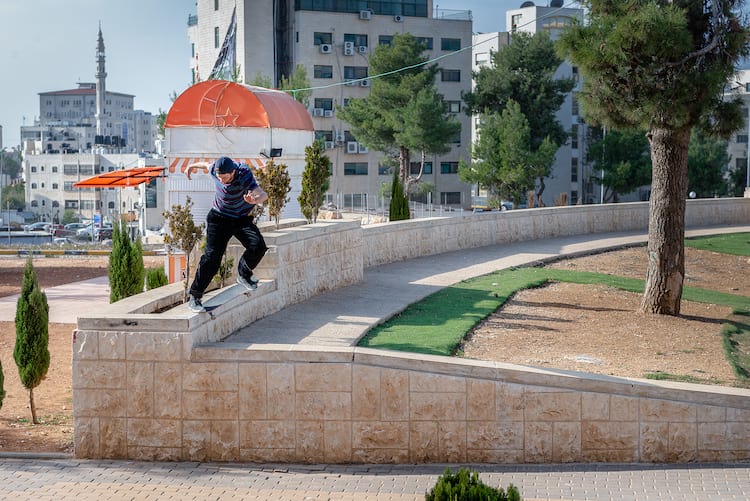 These perfect off-white tiles are everywhere in Palestine and are a friend to all nollie 180 switch crookers. But don’t trust me—go visit and see for yourself!

For most of us, skating begins in childhood with an explosion of excitement and possibility and we spend years letting the obsession slowly mature. But then life happens (school, work, kids, etc.) and the flame doesn’t so much fade as it does take on new forms. Skateboarders are uniquely bound by nostalgia, throwing on an old skate video just to get a little dose of our childhood. Chasing that feeling can lead you to all sorts of weird places. 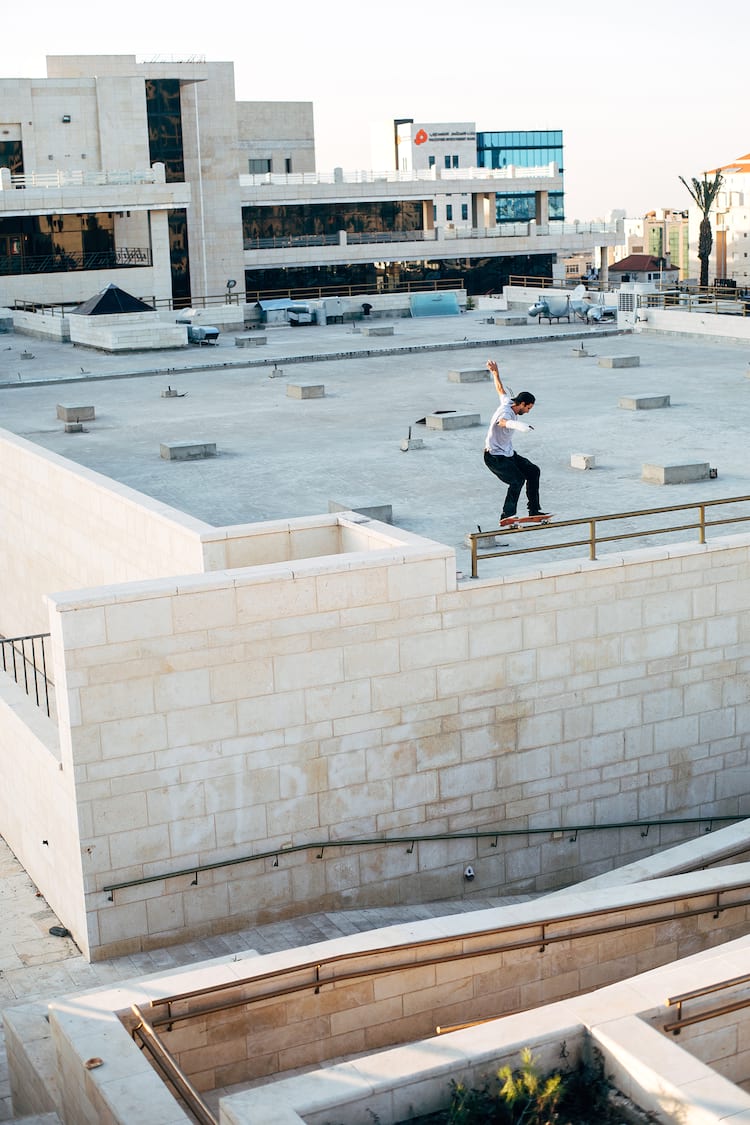 The very last day of the trip, the photographer gifted me with a nice spot. All it takes is an eye     Photo: Le Gall

The skate scene that people like Aram, Maen and others at SkatePal are building in the face of adversity is about as pure as it comes, something that feels special and unmistakable—it’s untethered nostalgia. Don’t get me wrong, they spend an equal amount of time bickering over who deserved SOTY and getting stoked on a GX hillbomb clip, but there’s a sense that they’re at the forefront of something new, an explosion of skateboarding throughout the Middle East and North Africa; the EMB moment of the Ramallah plaza has yet to arrive.

If you get the opportunity, I strongly encourage you to visit, volunteer or find a way to support them in their efforts. Or just go and skate with them. Being on the ground floor of nostalgia is a pretty cool place to be. 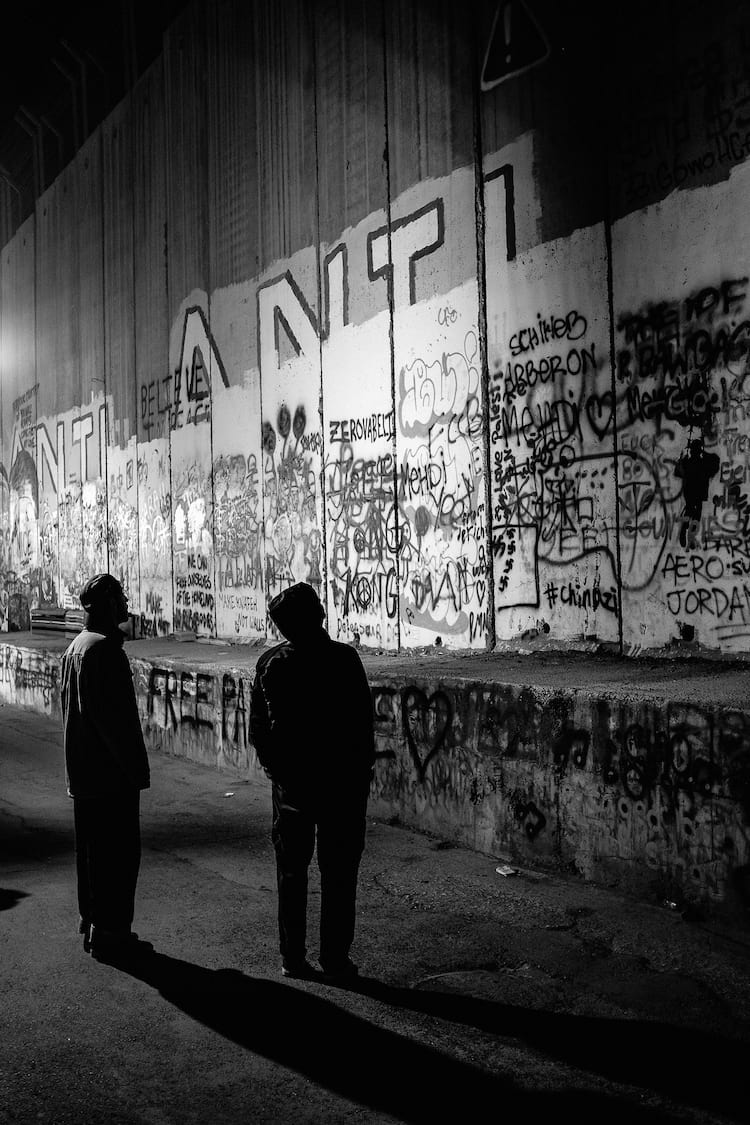