We're not sure why this shirt has outlasted hundreds of other Thrasher designs over the years, but she still stands tall. To celebrate, we want you to send photos of the closest resemblance or the most creative portrayal of the shirt. Extra credit for getting people to re-enact the whole scene, but teary-eyed portraits alone are fine. You can also fire up Photoshop and get weird with the art below. Best one over the next month gets a free Thrasher package. Send pics here. 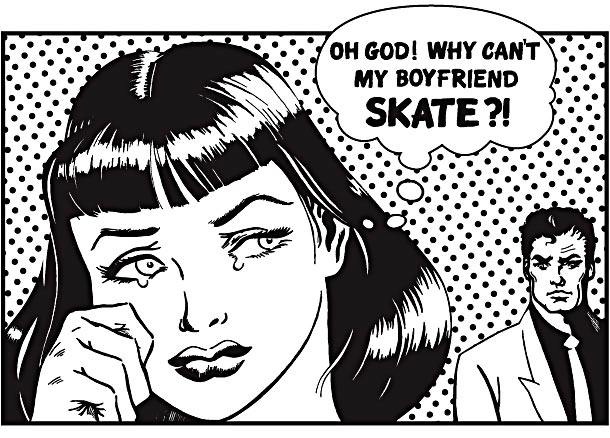 START OFF with a young woman drawn in a 1950’s comic-art style. Give her some sorrow and serious bangs. Then throw in a mysterious and kind of bug-eyed dude rocking a white tie in the background. Top it off with a tweaked line of soap-opera dialogue, and what happens? You get Thrasher’s longest-running T-shirt design (not counting the mag logo, dummy). Clocking in at 22-years, the Boyfriend shirt’s longevity is a twisted mystery, even to us. And we're not talking random "Limited Edition" re-prints. It's a shirt that's been in every mag, non-stop, for the past 273 issues. Does this forlorn female counterbalance the hell-spawn Skategoat through cosmic Yin-Yang action? No one knows for sure. Jeff Klindt came up with the design and it’s one small part of his considerable skate legacy, which includes riding for H-Street, working extensively with Thrasher and DLX, and being a musician in Wonderful Broken Thing and Joaquina. Jeff passed away in 2004, so many details of the shirt’s creation are lost in time, but he never could have guessed that this snapshot of emotions and haircuts would still be charging forward. So, straighten your white tie and console any nearby sniffling Betty as we salute this bizarro design which took on a life all its own.