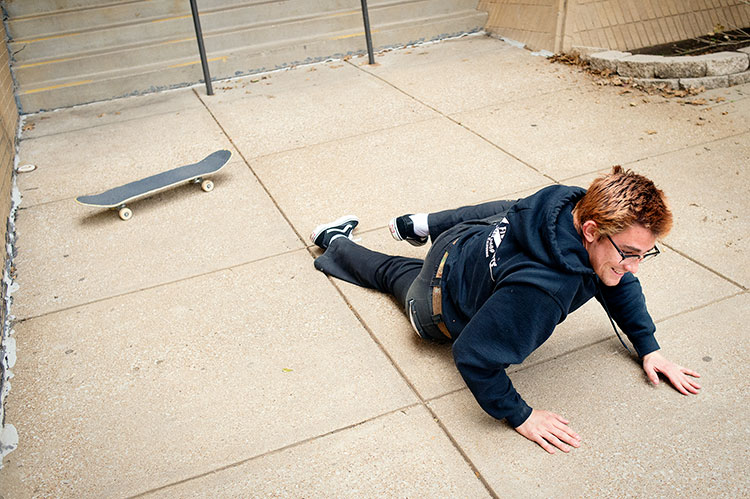 Within the first five minutes of this Texas trip group chat, Diego sent a photo saying he was going to take down this chick he was with. Right off the bat I knew he was gonna be one of my favorite dudes on the trip. This four-eyed speed freak loves a solid Tinder match, ordering pizza while doing interviews and might very well be a SOTY contender this year. I assure you, you’ll be seeing a lot more of Diego Todd. —Rye Beres

How was your first SXSW experience? Your Tinder game was on point while we were there.
Yeah, that was so fun. Me and ET were killing it.

If there was $100 on the line, who do you think would get more girls, you or ET?
ET has Tinder Gold so he’s ahead of me by that—and he’s foreign.

He must have good pick-up lines then.
He would just match with so many girls and be like, “Hey, you wanna get your back blown out tonight?” 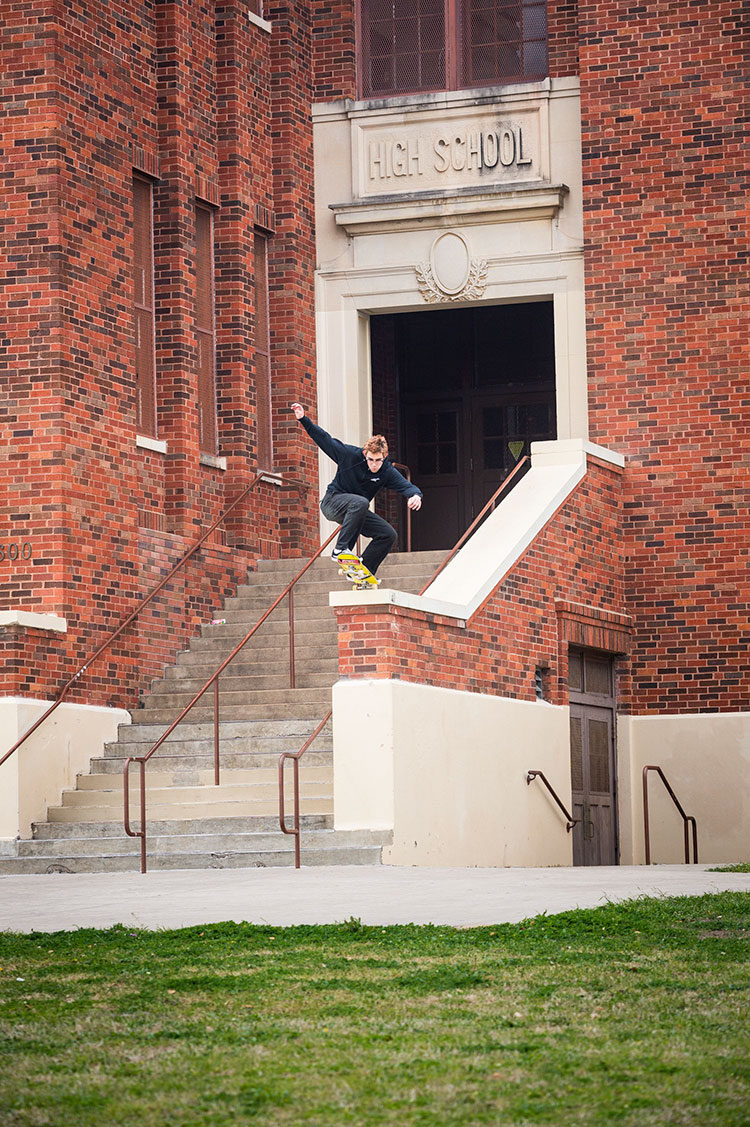 Dropped acid once. White dude sold it to me

Didn’t you guys go to the ICP concert?
No, that was Leon and Bob LaSalle. I’m pretty bummed I missed that.

How did this trip compare to a Hockey trip?
It was just a lot more rail skating and I had never seen people skate rails like that. It was cool to see someone like Tyson noseblunt that rail or his back Smith. I had never seen stuff like that and it blew my mind.

But then there was that Ducky slam.
That would’ve been me if I tried to hop on that thing. He got so worked. 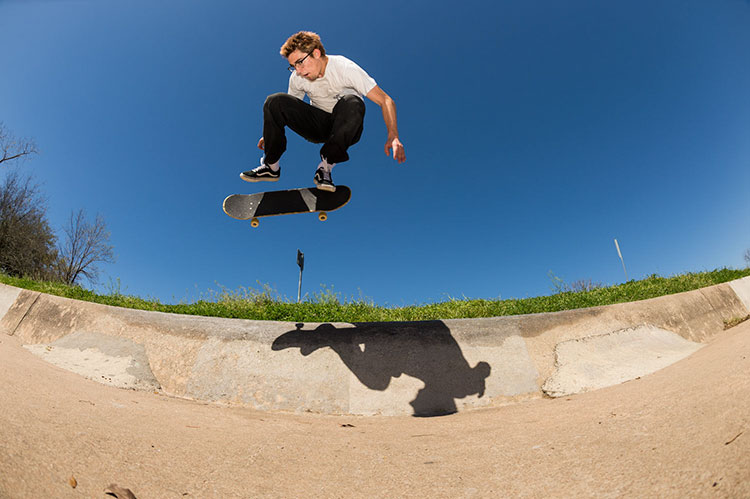 Your skating is more free thinking and fun. Where do you think that comes from?
I’m not sure if I was just pissed off and wanted to get clips all the time and it wouldn’t work. I just have to enjoy it and then maybe something will happen. I just like to skate around and hope something happens.

Does it trip you out skating with AVE?
It used to at first but now it’s just so fun. I love it.

You’ve never done an interview, right?
I did an online one with Jenkem and it kinda sucked. They asked the worst questions and they were just trying to get me riled up. I’m kinda bummed I did it. 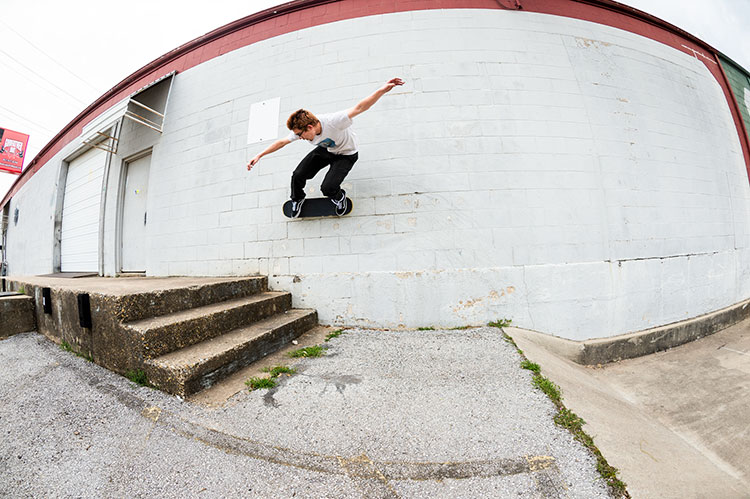 DFW ABD, thrown up for the sheer thrill

Was skating on the trip hard since we had 15-20 dudes at times?
It’s hard because you wanna go to a spot everyone can skate, but everyone is trying to just get photos and stuff. That’s why I’d just skate around and find a spot I could get a line at. It’s kind of overwhelming but it’s all good.

I feel like Justin was good with picking out spots and making decisions.
Dude, Justin was killing it. The trip was so long I forgot he was on it. He was fucking it up.

You said you wanted to go to back to El Paso and then Paris this year.
There was shit in El Paso we didn’t get to touch. There were sick house spots but it’s, like, impossible to skate with 15 people. 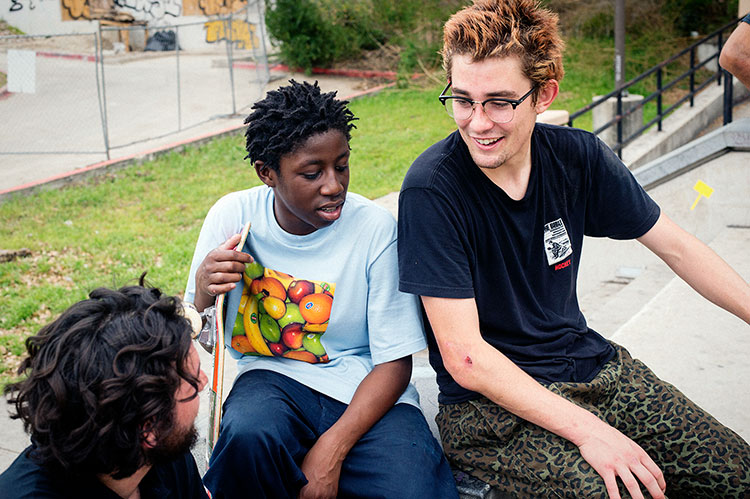 How was your first Death Match experience?
It was sick. I got to see bands I wanted to see. I’m not much of a mini-ramp murderer but it was still a blast. But it was sick to see dudes like Raney skate in person.

If a girl wanted to hook up in the porta potty at Death Match, would you?
It depends.

Was it weird to see your teammate Na-Kel on stage?
It was really sick to see him up there because he loves it so much and he has such good energy up there. 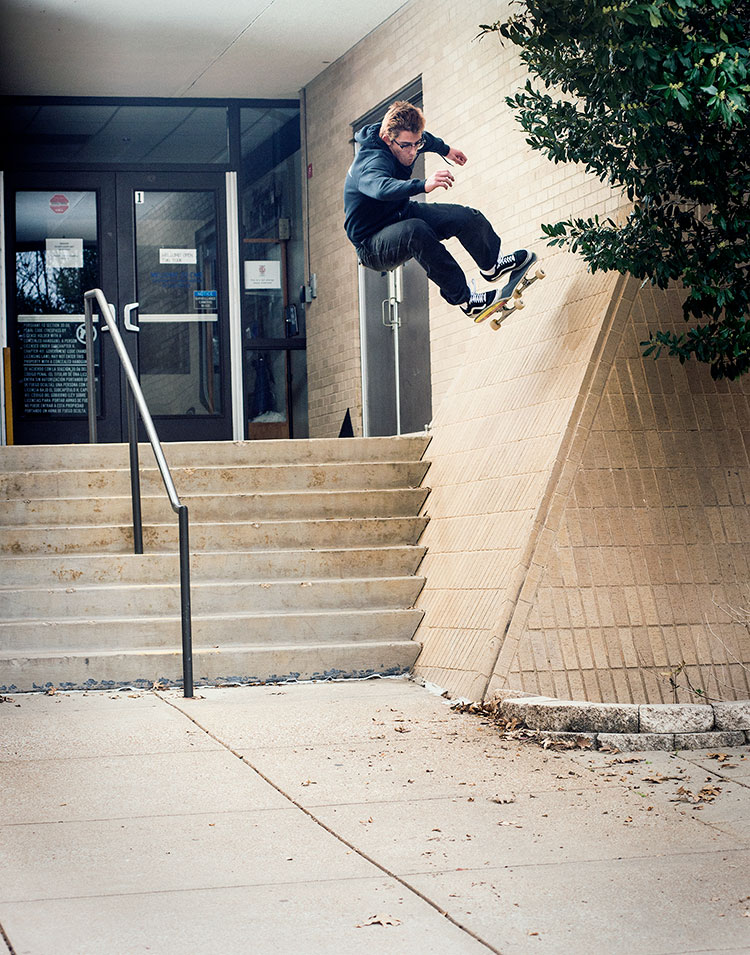 Frontside hopper. Thanks Zach and Keegan

Ronnie wants to know if he or Tyson were more intimidating.
Oh, Ronnie, for sure. No, actually Curren was the most intimidating.

Why, because he’s so handsome?
He’s all feminine; he’s all cute and smooth.

What’s been stoking you out lately?
Just skating with friends and getting these clips. Clips are life!

How come you don’t rock the sport strap for your glasses?
It’d be sick, honestly, but they don’t really fall off.

Fuck it. Just get goggles.
It sounds cool but they’d just fog up and that’d be bad, mid-line with no visibility. 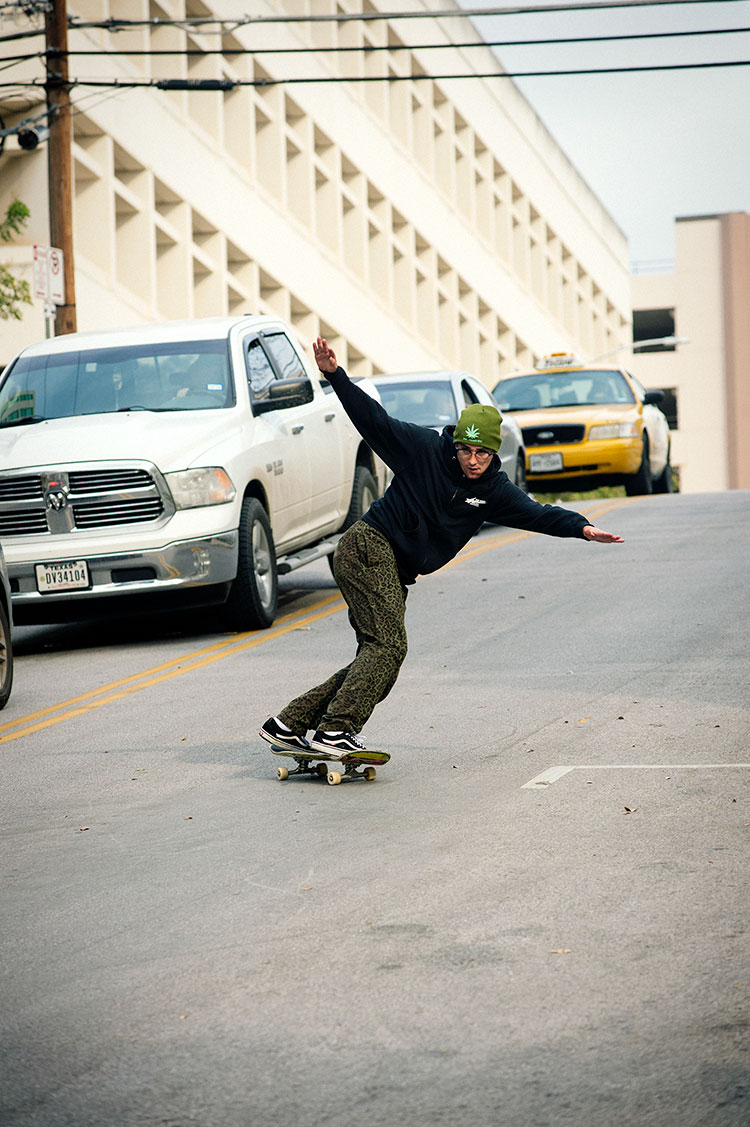 Were the leopard pants making you skate faster?
Definitely not. If anything they made me slower.

Do you think people skate better when they have a good outfit?
No, not really. People could look cool but be ass and it doesn’t matter.

What skaters are you stoked on right now?
I’m stoked on skating with Nick and ET right now. They’re sick. I also like Niels Bennett right now. His skating is incredible. 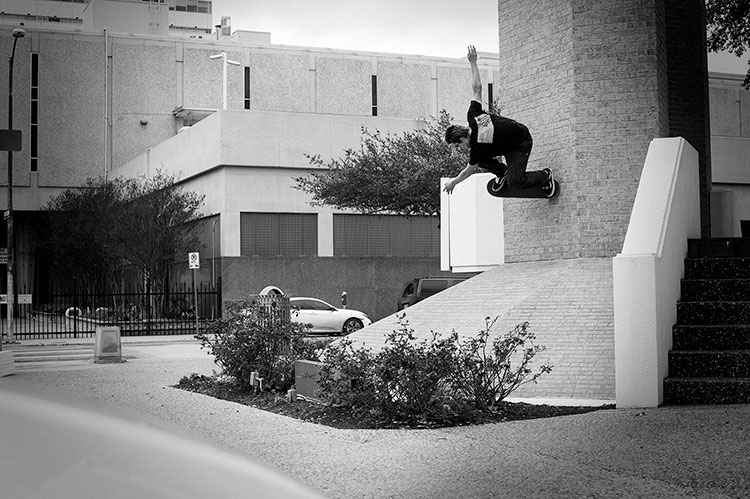 You never know, dude.
I’ll definitely be a contender. Vote for me, bitches! 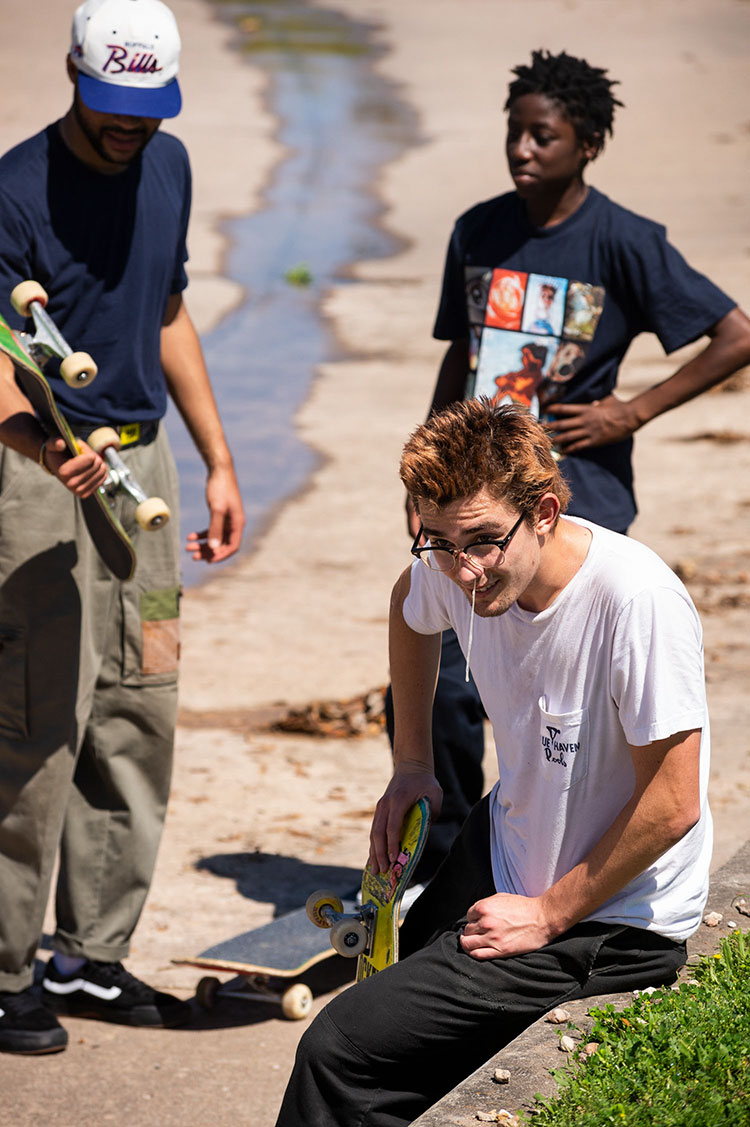