If you're a big fan of skateboard graphics and you haven't picked up a copy of Agents Provocateurs: 100 Subversive Skateboard Graphics, then you're probably not really that big of a fan. I hit up the book's editor, Seb Carayol, and asked him to name his five favorite graphics in the book. Luckily, he didn't mention either of mine; that would have been embarrassing. I also asked Seb to name his all-time favorite board not included in the book. Get your scroll on. —Michael Sieben 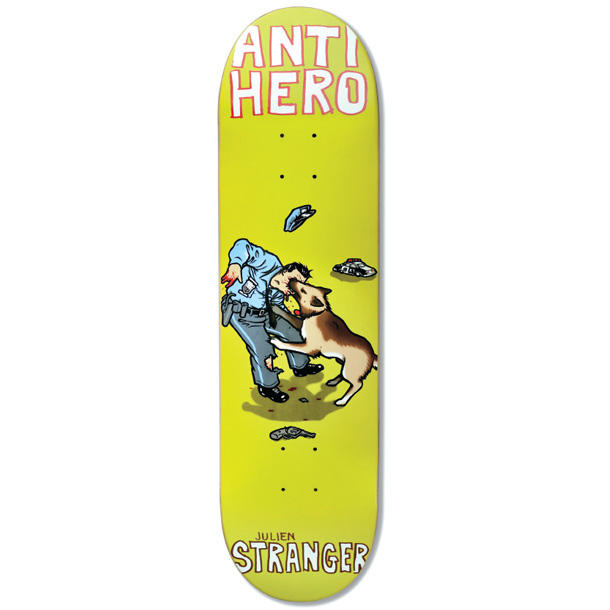 Nature’s Revenge Series
Antihero - Julien Stranger  (1996)
Artist: Todd Francis
Eighteen years old and sadly still a topic very much in the current news. I love how Todd Francis, who initially wanted to become a political cartoonist, has that ability to tell an entire story with one image. This deck was part of a series inspired by those horrible when-animals-attack-style VHS shows that were in heavy circulation pre YouTube. “With Antihero,” Todd says, “The stuff we did wasn’t about controversy. It was more like making people laugh, but sort of a thoughtful, bummer of a laugh. I like to think that the stuff we do with Antihero isn’t easy. Maybe it was one step too far, but it’s never the easy step too far. It has to push the envelope, but in a way that’s intelligent.”

Day at the Beach
World Industries - Chico Brenes (1994)
Artist: Sean Cliver
I could have picked any number of Cliver boards, but I chose this one because it's actually Sean's favorite. "It's the marketing equivalent to shooting yourself in the foot," he told me. "I mean, what 17-year-old kid would be stoked about having naked old dudes and ladies with saggy boobs and dusty old '70s bushes on the bottom of his pro-model skateboard?" Even funnier is that Chico and Sean didn't discuss the idea before, after, or since. Perfect. 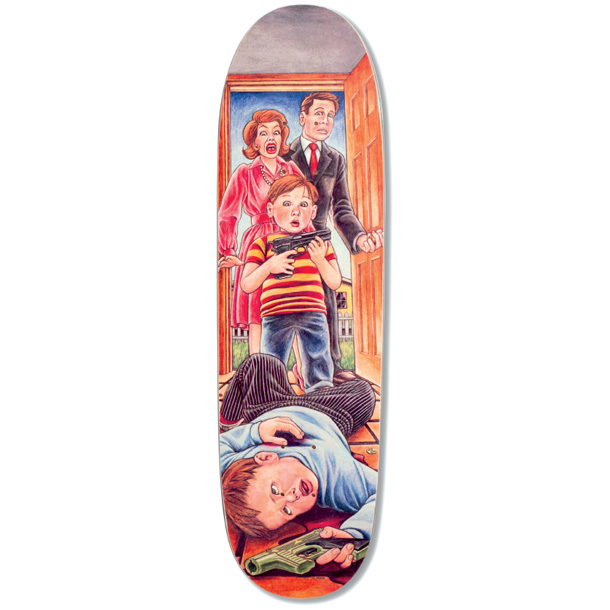 Accidental Gun Death
Blind - Guy Mariano (1992)
Artist: Marc McKee
I could have picked a more obscure one out of Marc McKee's catalogue, but this one's too classic to be passed. And to this day it is still Guy Mariano's favorite graphic. I like that it came out right when skateboard graphics had become really kid-friendly with all types of cartoon stuff. World and Blind were doing a lot of Dr. Seuss, Burger King and Super Mario-style rip-offs and then—BLAM! "I’d bring home my new boards," Guy told me, "and my mom would be, like, ‘Oh, that’s cute,’ or ‘Oh, that’s cool.’  And when she saw this one, she was just, like, 'I don’t like that one.' But she wasn’t that mad.”

The Tank Deck
UNbelievers (2003)
Artist: Jeremy Fish
Also known as "The Irak Board," this one of the more adult, political decks that came out of the Scott Bourne/Jeremy Fish camp over at UNBelievers skateboards in the early 2000s. "Scott is one of the only pros I ever did graphics for who was smart enough to have powerful messages to express," Fish says. "I was lucky enough to do boards for a guy who had a shitload to say." Personally, I always liked deck companies that addressed, even in a basic way sometimes, political issues/current affairs, so I wanted to make them a central part of my book—so it's not just violence and penises (which I do enjoy as much as the next guy). 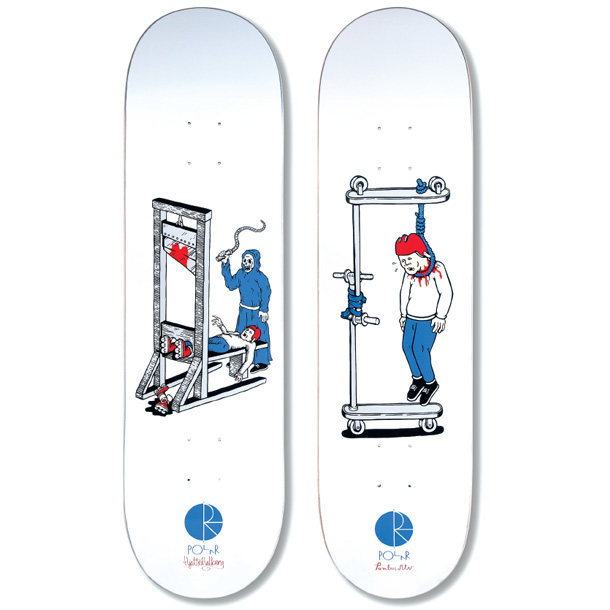 S/T Series
Polar (2012)
Artist: Jacob Ovgren
Not to toot the Euro horn too hard, but as an arrogant Frenchman I enjoy believing that a lot of the resurgence in the let's-actually-think-a-bit-before-just-printing-a-huge-logo-on-a-deck mentality has to do with the rise of small European companies (Cliché, Antiz, Yama, Trauma, Palace, Magenta, etc.). To me, the epitome of fun/serious/weird/cool is just what Polar does. Sure, there are more political companies out there but hey, as their artist Jacob Ovgren says: "Maybe some ideas we wanted to develop with Polar were a bit over the top… But nothing worse than reality.” 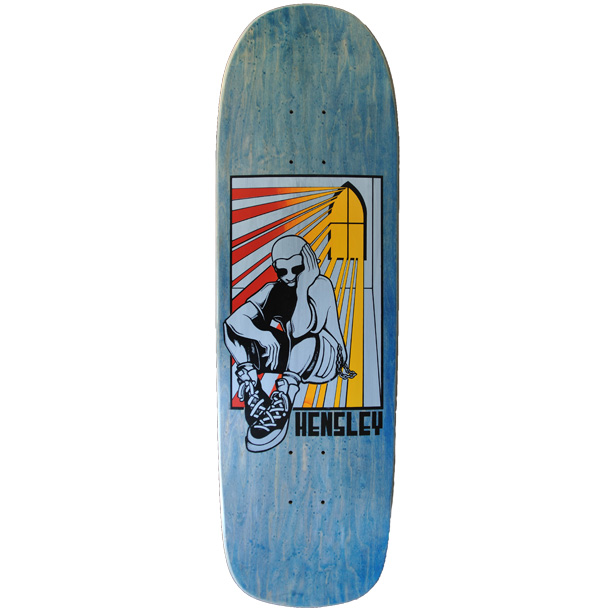 Church glass
H-Street - Matt Hensley
Artist: Jeff Klindt
This was the fourth deck that I ever owned, but the first one I was truly stoked on. The deck I had before this was a Zorlac Danny Myhre model. I hated it. A friend advised me to buy it because it had a pointy nose which was allegedly "better for no complies." I found out later that the shop was desperate to sell that deck, and I was the sucker they were hoping would walk through the door that day. Anyway, I really loved the wood grain on this Hensley deck and the subject matter resonated perfectly with my atheism. I'd love to find the original drawing that was later reworked by Jeff Klindt. I wonder if it even still exists.

If you're in LA, check out the Agents Provocateur group art show at Subliminal Projects that runs through February 21st, 2015.

And if you want to pick up a copy of Agents Provocateurs: 100 Subversive Skateboard Graphics, copies are available through Gingko Press.