Thomas Campbell’s new film Ye Olde Destruction premiered on Thursday, March 28, at The Ritz Night Club in San Jose, CA (Corey O’Brien and Louie Barletta’s spot). Y.O.D. captures two groups of skaters hitting the road in cool old cars, riding whatever DIY spots they can find—or just making their own, many times using the cars themselves as obstacles. Don’t try that on your mom’s Subaru! Documented over a couple of years in California, this black-and-white 16mm film is an art piece featuring an eclectic crew checking out spots in towns such as Bakersfield, San Jose, Treasure Island, Davenport and the South San Diego area, all set to some some heavy guitar-riffed ambient rock. At the premiere, DJ Duffel spun some 45s before the show and afterwards Tommy Guerreo played his chilled-out street chicken rock guitar with fellow mellow skate groovers Chuck Treece on drums and Matt Rodrigues on bongos/percussion. It was a rad night in SJ. Thanks, T-Moss, for another feel-good film and thanks to everyone who came from close and far to give their support. —Erik Olsen 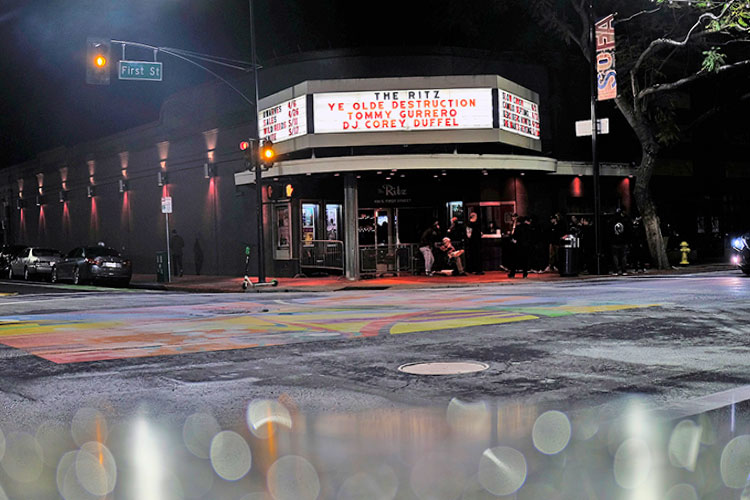 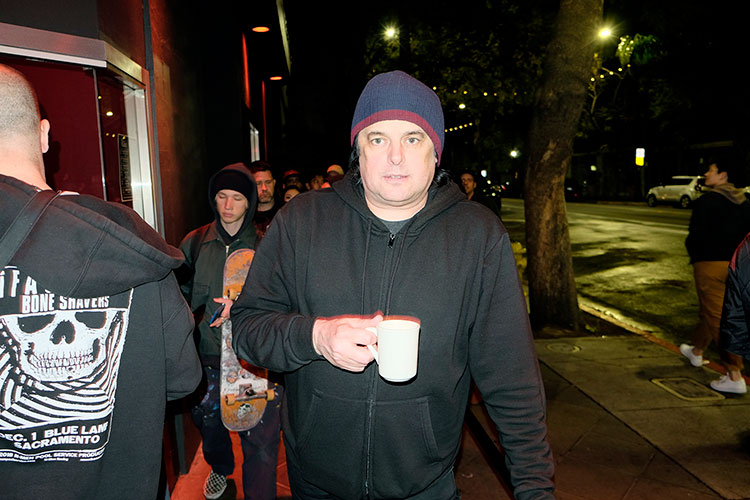 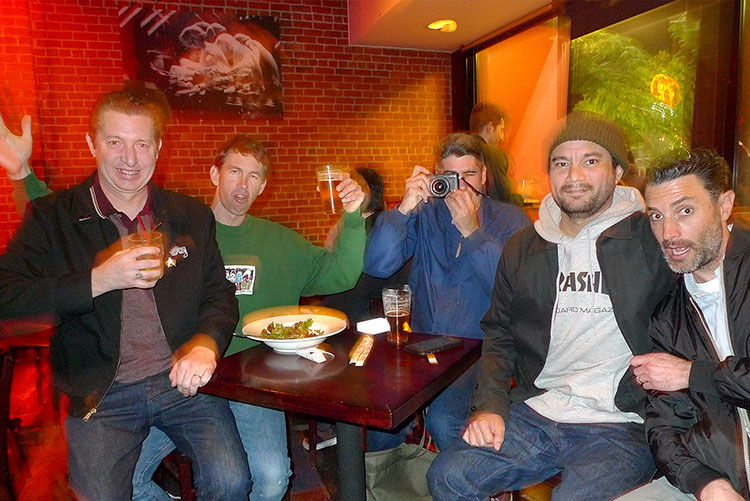 Before entering The Ritz, San-Jo-area old-time legends Jason Adams, Israel Forbes, Jai Tanju, Matt Eversole and Mark Whiteley were getting warmed up across the way at Cafe Stritch 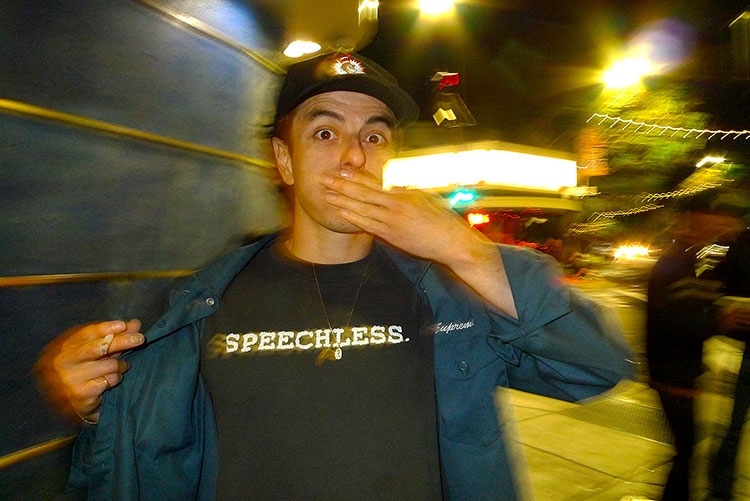 Out front, Daryl Angel was speechless, which seems like a good idea 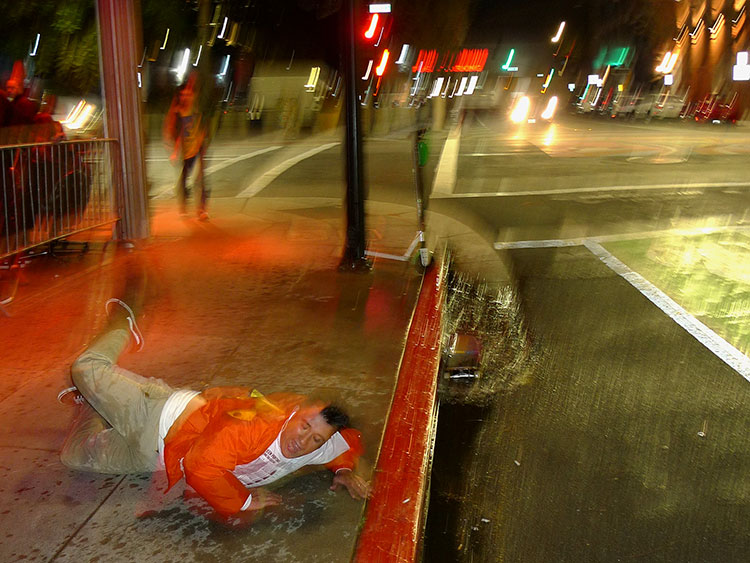 I can’t decide if Zarosh is a skateboard purist or just wants attention. Either way, he was trying to frontside slappy this wet red curb right in front on the venue and was eating shit over and over 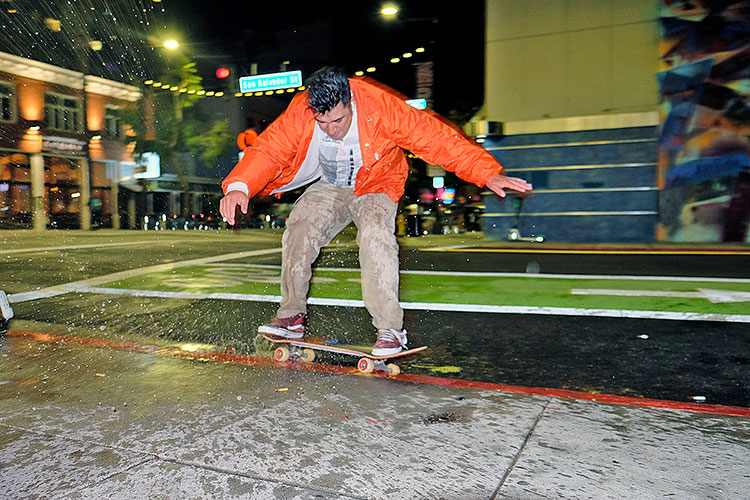 He nailed the slappy, which was sick, and possibly could have gotten 1986 Corey O’Brien to crack a smile 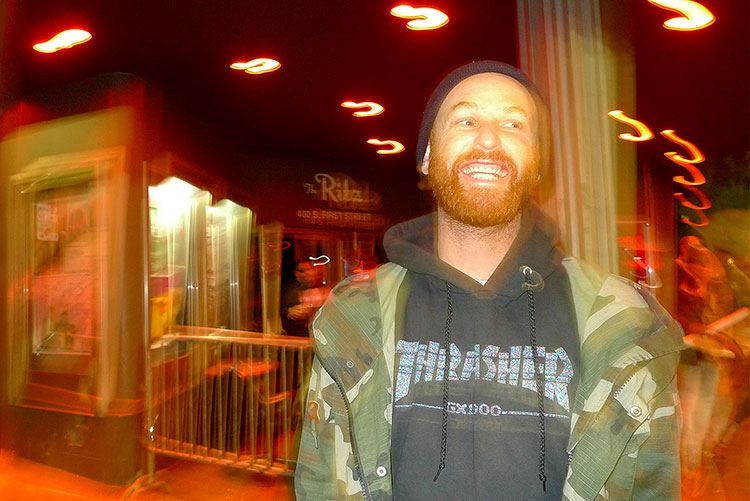 Mike Kershnar was all smiles as usual 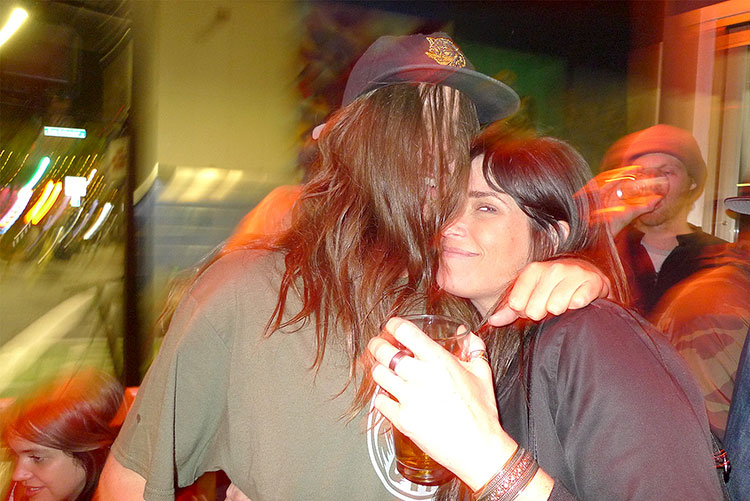 Trevor Morgan’s hair and his much better half, the lovely Stephanie 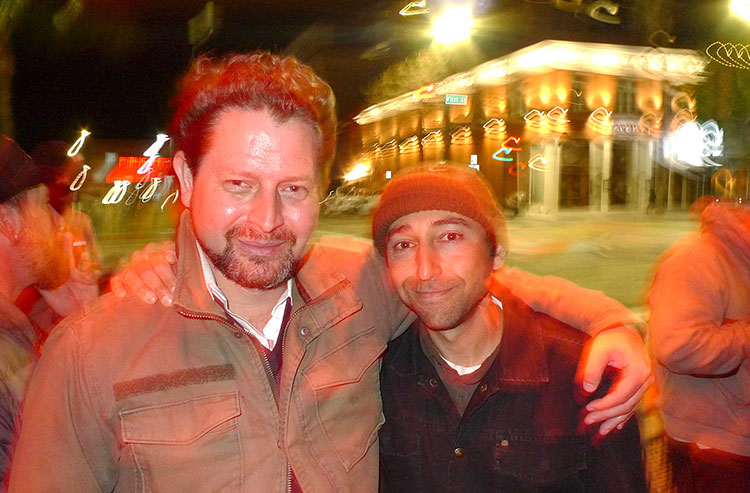 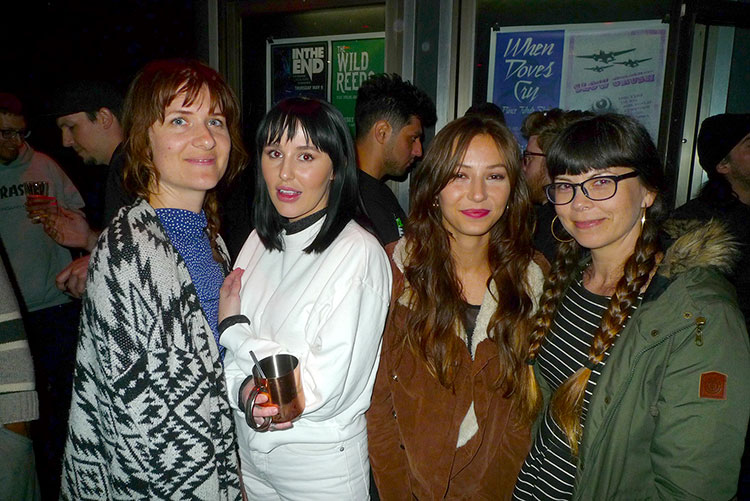 This is the only group shot of the ladies, ‘cause we are in Man Jose. Black hair, white shirt, white pants, Cadillac, that girl’s a time bomb 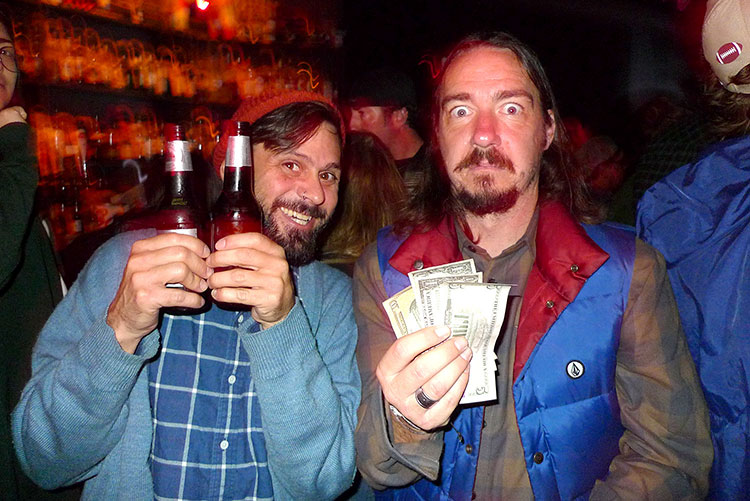 Louie gets drinks for free ‘cause he’s the boss. But two for him and none for Cas? Well, that’s not Berry nice. Caswell is willing to pay. What gives, Lou? 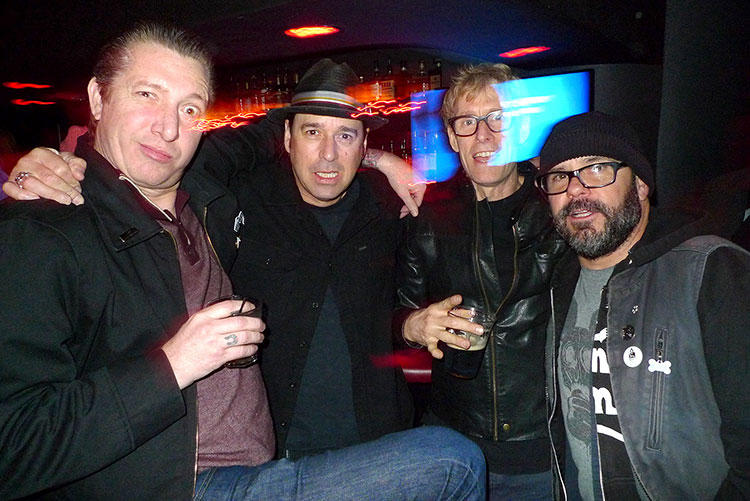 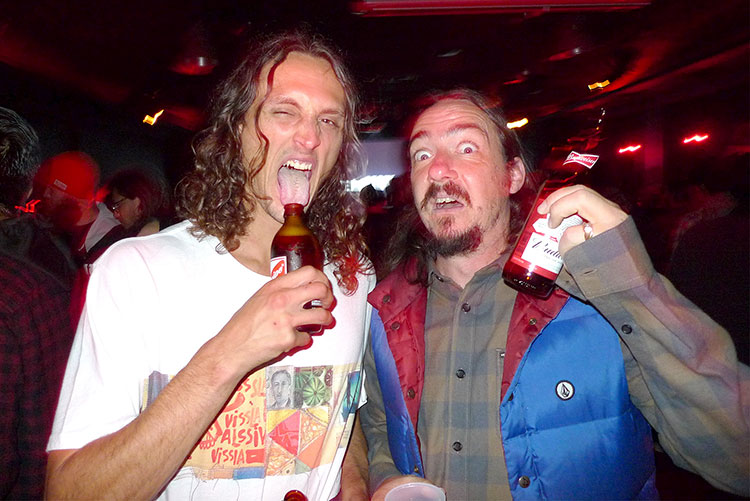 Evan Smith, with a Thomas Campbell shirt, trips balls while Caswell finally gets that beer! But Cas looks as though he may have had a stroke 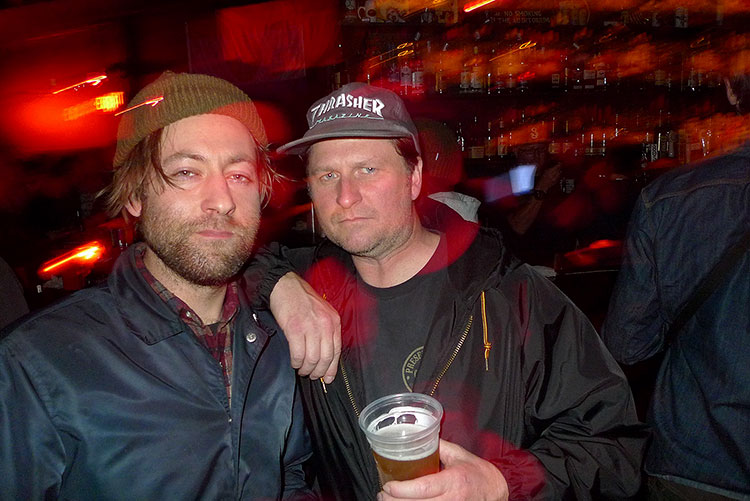 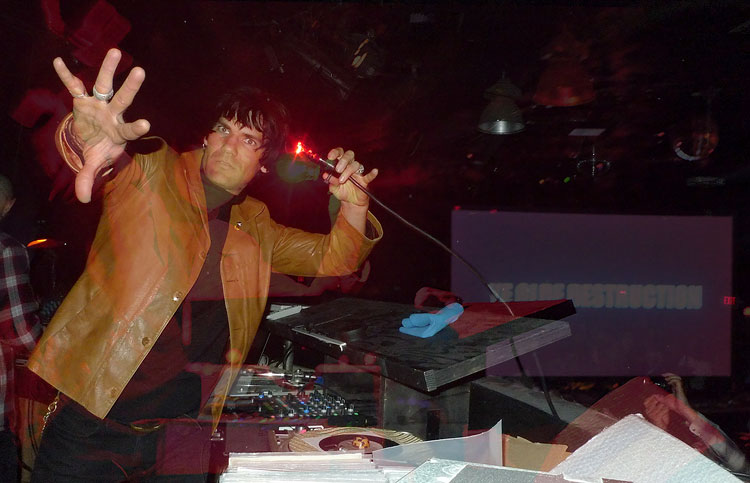 Corey Duffel getting spooky for the crowd with some record spinning 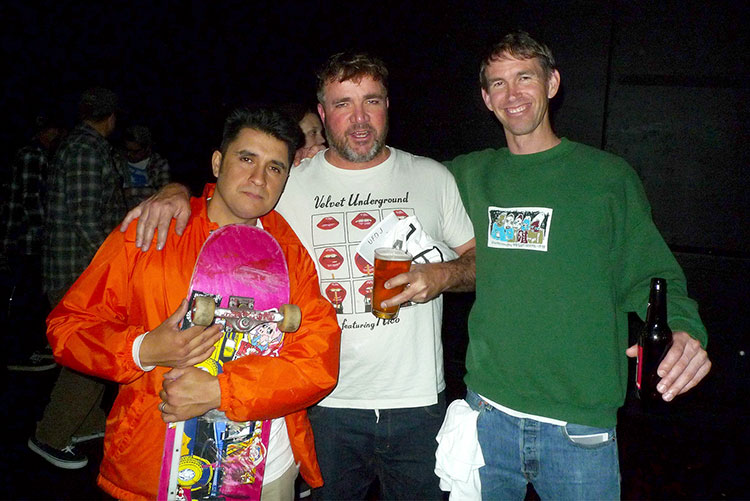 Zarosh (who carried his board around all night, apparently), Thomas Campbell and Israel Forbes (with an OG SMA T-Moss sweatshirt from when he was on the team) 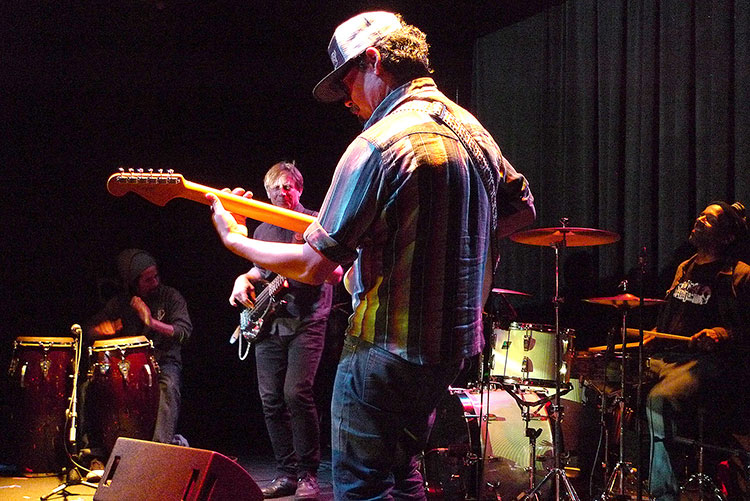 Tommy Guerrero and company were dope. With musical greats like Stereo Sound Agent Matt Rodrigues on the bongos and Chuck Treece on drums, you simply can’t go wrong 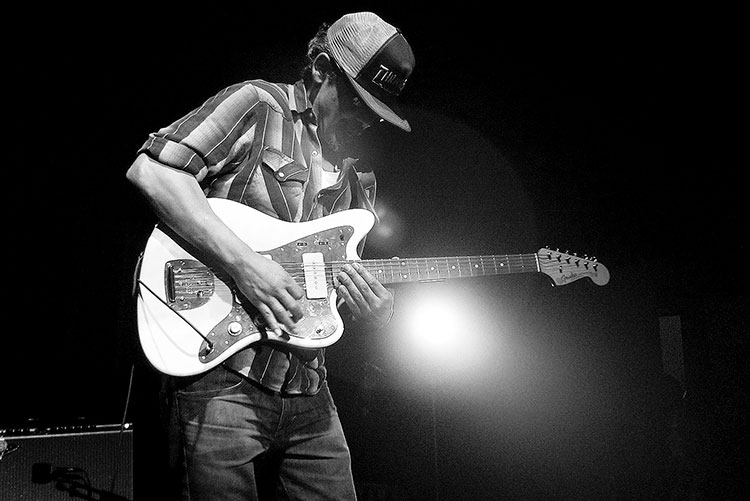 TG belting out some riffs for the all the San Jose street chickens was a great way to end the night. Congrats on Y.O.D., all ye destructors!
© 1981–2023 High Speed Productions, Inc.