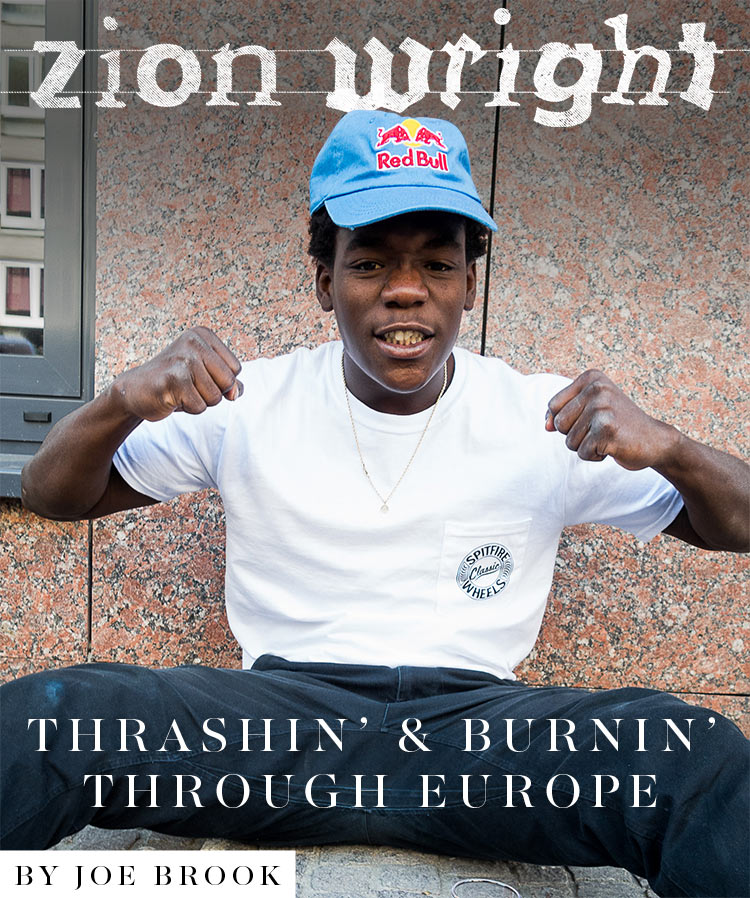 How was it rolling 18 deep?
It was crazy. Honestly, it felt comfortable knowing no one’s gonna mess with us being 18 deep.

No one’s gonna fuck with 18 people.
Nope. Two vans deep? You fuck with the first van, the second van pulls up. Skrrrt!

What was the best part of the trip?
For sure that Animal Chin-style ramp we went to in Germany. That was amazing. Being able to skate something like that was super sick. Got to watch Grant, Raven, Raney, Oski and all the boys skate it. 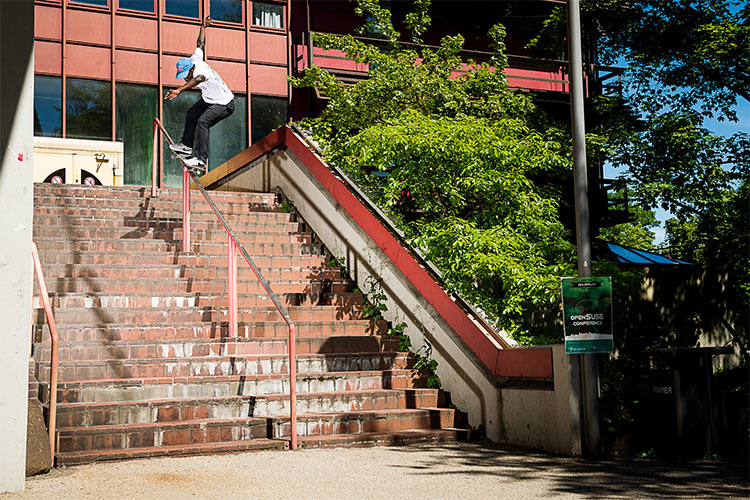 One stair for every dude on the trip, Zion double trucks down an 18. Yeah, we're counting that shorty at the bottom

What about having Phelps on the trip?
Dude, Phelps is always a pleasure to have on a trip. He’s always revving it up, firing it up.

How was it skating spots with that many people?
Honestly, I feel like when it’s a squad it’s sometimes a little bit better ‘cause someone out of the squad is gonna skate something, you know? Or say it’s something we all like, everyone's gonna skate it, which makes it more fun.

What was the worst part of the trip? Was there any point where you were just, like, “Fuck, this sucks.”
I didn’t really get hurt, so I wouldn’t say there was a bad part of the trip for me. But for sure towards the end I was kind of anxious and ready to go home, ‘cause I was already on a one-month trip prior to that. So it was getting pretty hectic.

What was up with the grasser you did down the 18 stair? What happened?
So we pulled up to the 18 stair and I guess Pfanner ollied it in a line. Cory was, like, “I got 200 Euros on whoever does it,” and Kyle was, like, “Are you serious?” He just went back and ollied it real quick, then I was, like, “Alright, shit, I want to ollie it. Let’s get it.” So I tried the street grab on the first one, kinda stuck it and was, like, “Woah, that was hectic.” Went back up, tried a melon and I felt like I over tweaked it because I was falling more down to the floor and I was, like, “Ah, I’m just gonna splat.” So I literally splatted and broke the nose and tail of my board.

I’d never seen anyone break a board like that before.
Yeah, it was hectic.

Did it hurt your ankles at all? I thought you broke your ankle at first.
Dude, I rolled my ankle for sure. But yeah, it was hectic. That was a lot of impact.

Dude, I was tripping. I thought, “Oh shit, Zion just got hurt.”
Yeah, when it happened everyone literally just stood silent. I look up and I’m, like, “I broke the nose and the tail.” Everyone was, like, “What? Dude, we thought you were gonna say you broke your ankle or something.”

Yeah, dude, you were flying through the air.
I had angels with me.

What was up with that demo in Zurich?
Oh, dude, that thing was sick. That skatepark is massive. There’s a street section and then over the bridge there’s a big bowl. That was the first demo we did and it was super sick. A lot of people showed up.The demo was four hours long. We had fun.

It was like the Woodstock of skateboarding.
Dude, yeah, it was gnarly. I don’t think I’ve ever seen that many people at a skatepark.

That’s cool, man. That’s a good trick. It was a crowd pleaser. People love that shit.
Yeah, literally the whole squad was just, like, “Zion, where’s the 540? You gotta rev it up.” It was funny. 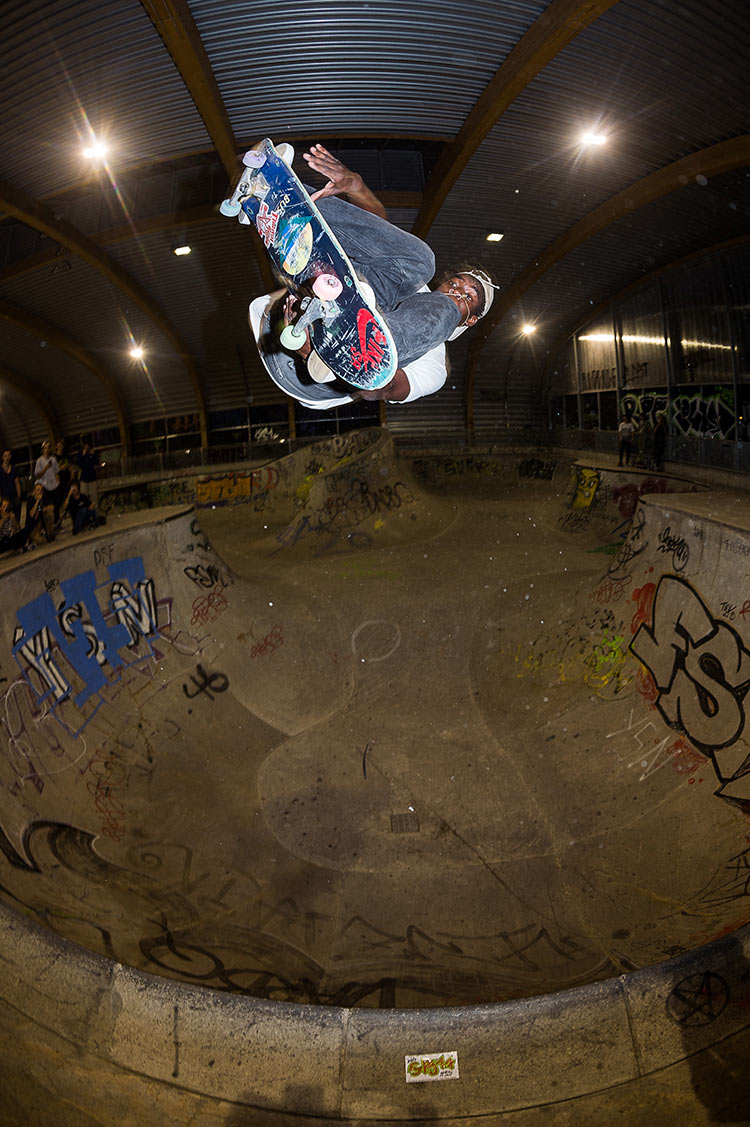 The five is alive! Zion, backside 540 on a round wall

What was up with all of the police drama?
Oh, dude, that shit was hectic.

Did you dirt skirt it? You weren’t even part of it, huh?
Yeah, I’m glad I wasn’t a part of it. I’m glad I didn’t get involved with that, because it got really hectic.

What’s the most important thing to bring when you’re on the road?
I would have to say some headphones, f'sho. Need that to be able to nod out and do your own thing for a sec. Because it can get hectic being with 18 people. Sometimes people are not on the same tip and some people are gonna bump heads, so it’s cool to just have that little me time, a little alone time to just chill and not really talk.

What’s up with that waterfall spot? That place was sick.
Dude, that place was amazing. It was crazy, ‘cause it felt like we were driving for two hours, but it really wasn’t, it was like 30 to 45 minutes.

Who did you kick it with the most? Who were your go-to dudes?
I would say Kyle and Ishod. We were kicking it deep with all the bros. Yeah, there were times where we’d be in the car and we’d be separate, but we would still be with each other. When we were at the spot, we were just all ganged up.

I feel like we barely even slept on that trip.
Oh, dude, for sure. That was crazy. I felt like Alden was really a trooper for dealing with all that shit. He was taking it mellow. He wasn’t super crazy, like, “Get in the van!” You know, he had to boss up when he did. But yeah, Alden rules!

What was up with that dude in Zurich who was the local filmer? What happened to him?
Oh yeah, he got super drunk and slept in the lobby of our hotel. In the morning, the people at the front desk called an ambulance to take him to the hospital! Thrash N Burn melted his mind!

The skating was so gnarly that it melted his mind.
Did we ever get those clips from him? 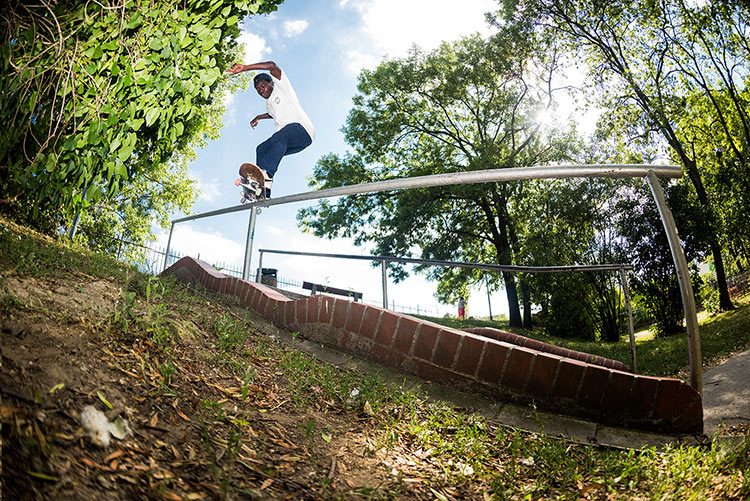 Zion surfs a feeble backside 180 out above a brick wave. Shaka, Mr. Wright

Did you even get a chance to watch some of the demos or did you just skate the whole time?
I think at the second demo I missed some shit, ‘cause I went to the van to get some water or to change my shirt and all I’m hearing is the place just erupting. It literally sounded like they were knocking the place down. It was fucked up. But yeah, everybody was killing that shit. Grant was fucking it up, fuckin’ Oski, Kyle, Louie, all the bros were getting it. Raney and Cory would sneak in there and get some little action in too.