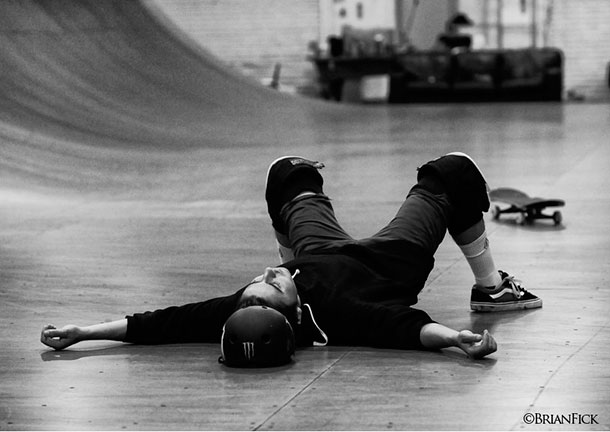 Alex Perelson is probably the best vert skater of his generation. He's also a uniquely strange person. At first he was the shy kid who never talked, then all of a sudden everything you'd hear about him was some sort of outrageous tale of late-night weirdness. Through it all, Alex has been ripping to an insane level. And though you may catch glimpses of his powers in a contest clip here or there, his recent Snow Blind video is the closest he's come to truly showcasing his style, skill and outright fearlessness. So much of this stuff is truly death-defying! Concrete, Skatelite or Cayman Island grit, Alex floats through it all with grace and Yousefpour-like power. Plenty more to come from this kid, provided he can stay home after 10 p.m. –Michael Burnett

First of all, Alex, let's catch the kids up with who you are and what you're all about. How old are you, where do you live?
I'm 23. I've got a place in Vista.  Elliot Sloan lives close. So do Mayer and Sergie.

Who are you tight with?
I hang with Jimmy Wilkins, Sam Beckett, and Mitchie Brusco most days. Mayer and Pierre too.

Who are your sponsors these days?
Real, Vans, Thunder, Spitfire, Skeleton Key, Paradox

What's your schedule?
I like to stay up late watching Law and Order SVU or making music. I go to bed around 5am. Wake up at 2 or 3. Often Jimmy will come in my room and wake me up to go to lunch. Then we'll go skate depending on the day. 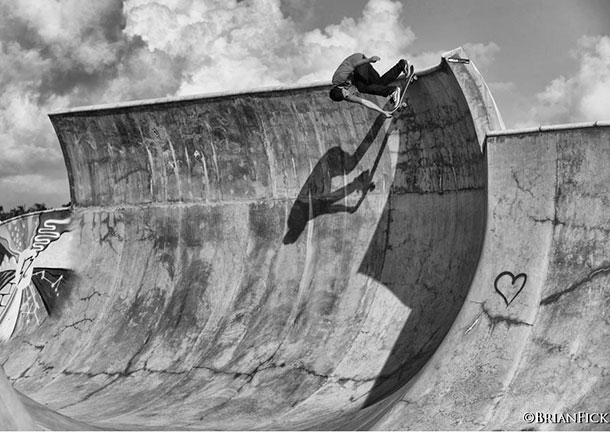 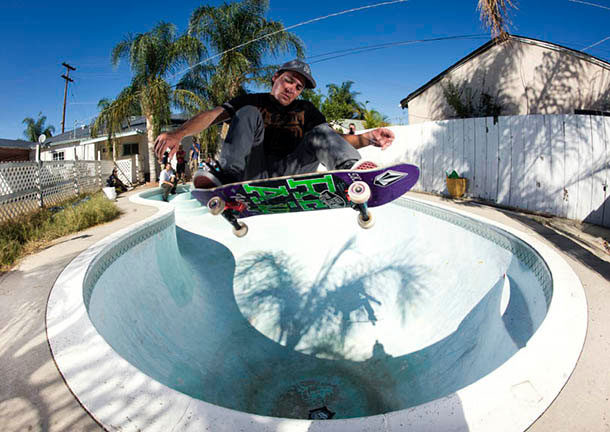 How long can you go without skating?
I like skating three times a week if I'm filming. Bailing the same trick over and over again halfway down the ramp leaves your knees sore. If I have something else going on I sometimes take a week off, but I miss it a lot.

Speaking of, this video is crazy. How long have you been working on this thing?
Three-plus years. It was supposed to be for two other things before Thrasher wanted to do it.

Well, we're glad we got it. It's bonkers. Do tricks come easy for you?
I can kind of tell on the first few tries if something is going to work and how long it might take. If it's too far away I forget about it and move on. Other tricks might work right away and I'll try it for a week until I feel the right one because I'm scared.

How long will you drill a trick?
The longest in this part was probably a good ten two-hour sessions. It was the fakie frontside half Cab flip. It's an awkward one.

What trick in this thing was a real bugger?
The back crail at Cayman was the most frightening. Kickflip 5-0 on the oververt at Faelledparken took a few days, too. 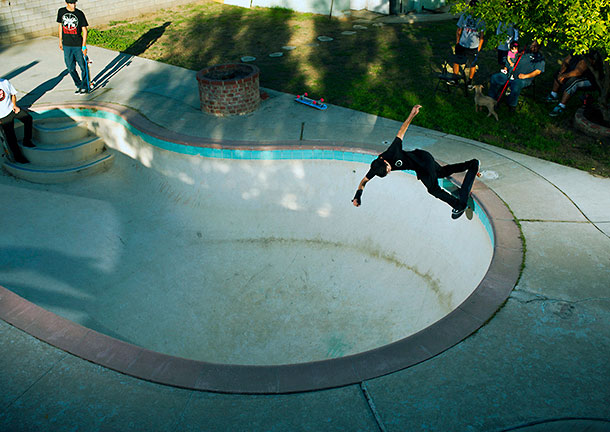 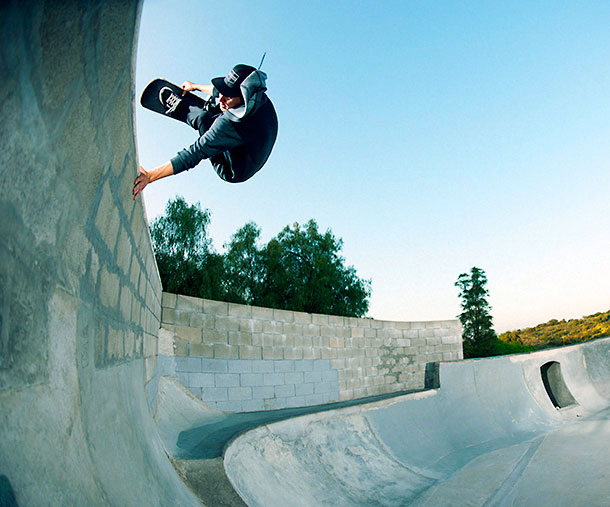 What's the one that got away?
I really wanted to get a hoho for the novelty of it. I grabbed it coming in and wanted to do it really bad but it didn't happen. I swear that trick is harder than any other trick for me!

You have any close calls on that extension of the Monster ramp?
Not really. Sometimes I'll drift to the edge but I know how fucked up I would get if I fell off that onto the concrete so I avoid it.

What is your favorite terrain?
Vert ramp with a couple extensions and a roll in. Then a backyard pool.

If you could only skate one specific spot for the rest of your life what would it be?
The old Clairemont YMCA vert ramp. 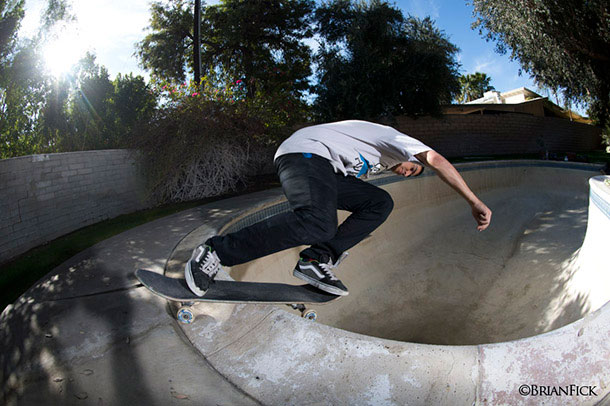 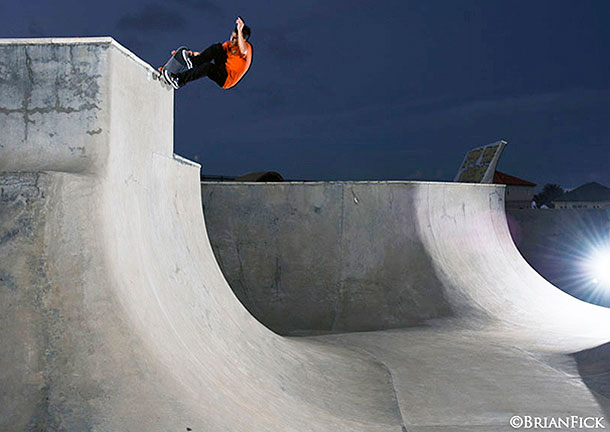 Do you Mega Ramp anymore?
Yeah I skated the step-up recently.

What's your best flip trick on flat ground?
I made a switch tré a few months ago. Ha-ha!

What's your take on padless vs padded?
It depends on the person. Someone like Grayson doesn't think about it. I won't try to do a vert run in a bowl without pads.

Are there any trends in transition skating you find dumb?
900's.

How do the people you skate with effect your skating?
I like skating with people who I think are better than me or I admire. Jimmy is unique and Mitchie has amazing natural talent. Navs is so fun to skate with. Colin is crazy to skate with, too, some of the stuff I see him doing is hard to understand. Bob is one of my favorite people to skate with. Basically anyone who will hype you up when you're close to something. 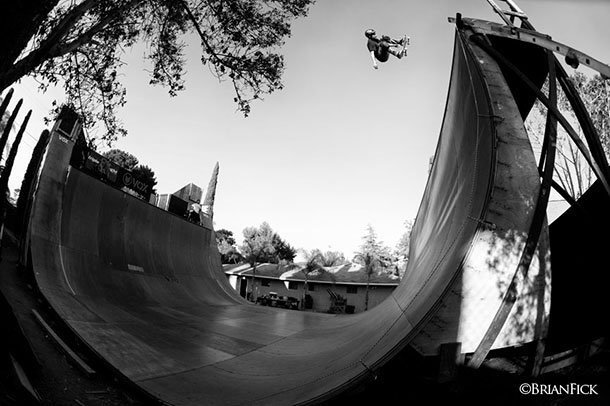 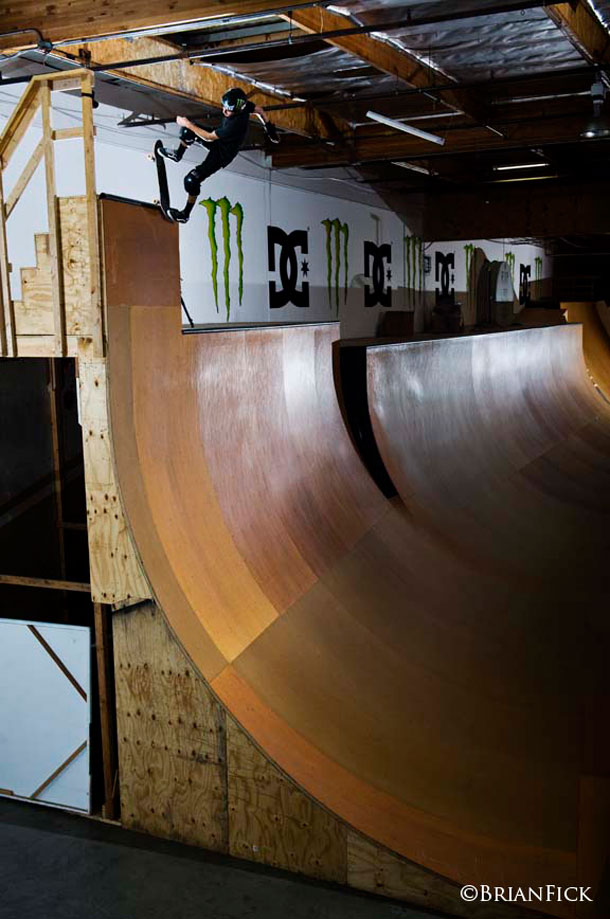 Tell the story about crashing into Pierre's car.
I did a 50-mph drift from the front gate of DC to the garage door. My tires were bald and my brakes needed replacing. I saw I couldn't stop and had to squeeze between Pierre's car and this dude from ESPN's truck. Honestly I think I reacted pretty well. My car is pretty much fine aside from some dents in my door and the dude's truck just had a little scuff on it. Pierre's car was pretty bad. He was about to kill me!

Are you reckless behind the wheel?
No I've never been in an accident outside of drifting on private lots or dirt roads.

Is there pressure on you to win these contests?
Pretty sure people don't expect me to win. Sometimes I do well but it's flukey. I really want to focus and do well in comps next year.

Are there any of these new air babies that you're backing?
Tom Schaar.

Do you like to skate a session with little kids?
Yeah they remind me of myself before I got more into the older dude's world and I'd like to be able to help them in whatever small way I can. 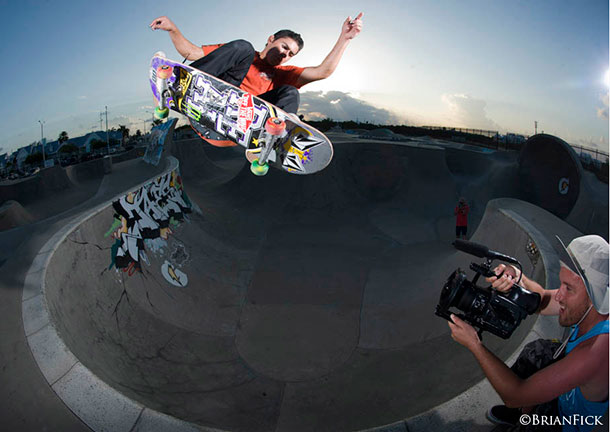 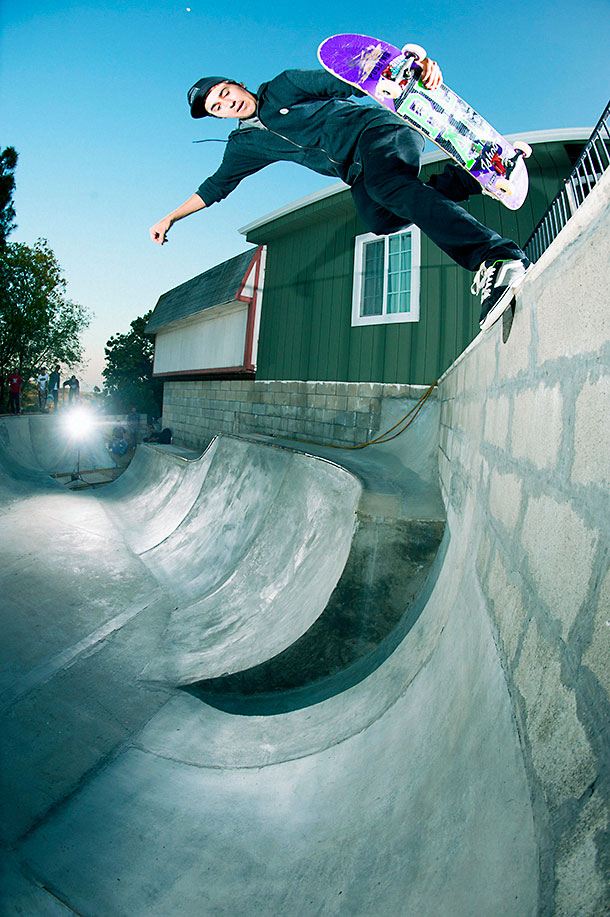 How closely do you follow the pro skate scene? What did you think of the Cherry video?
I don't know anything.

You've lost some sponsors recently. What happened? Are you blowing it?
I'm trying to learn from it. I'm always skating and trying to learn new stuff and skating is my reason for living. I'm also impulsive and easily distracted and don't always try my best to succeed in whatever the situation. I've learned lessons for sure.

What's your stance on drug and alcohol use?
Nothing good ever happened after 10 pm.

If it came down to it, are you more likely to move in under the vert ramp or into Gentry's trailer?
Under the ramp with Jake Brown.

Like Jaws and Dakota, you prefer robot music. What are some robot jams the kids should know about?
Trust is really good. Fever Ray is also one of my favorites. I think Thrasher actually did a write up on her. 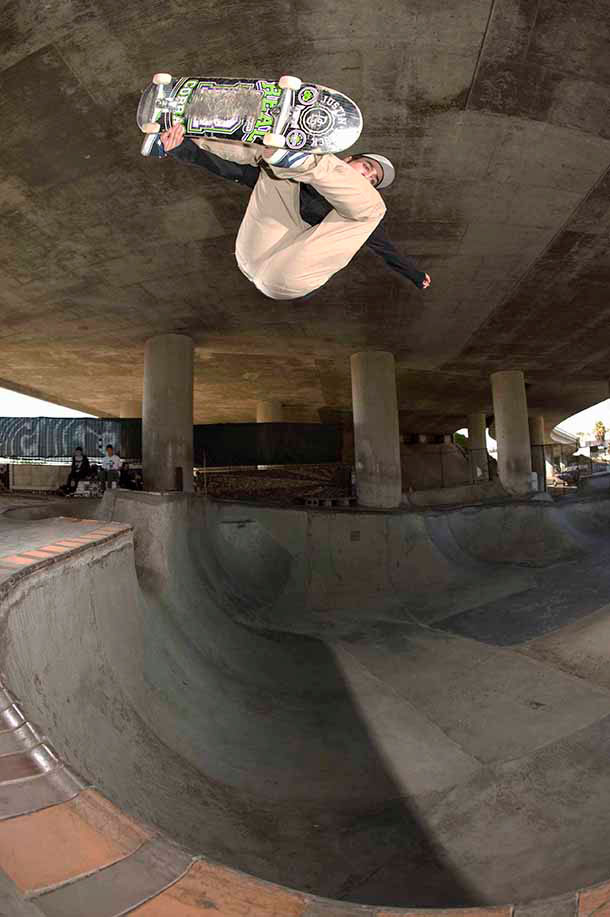 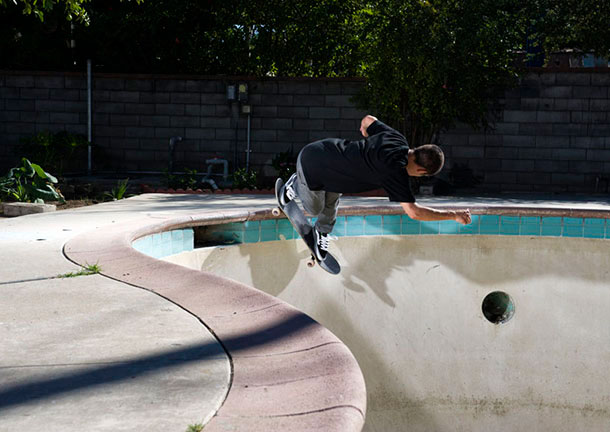 Who's the greatest vert skater of all time?
Bob, Danny, Colin, Rune, Jake, Jimmy, Hosoi, Gonz, Miller. I can go on for awhile.

Who's the greatest black vert skater of all time?
PLG

You ever worry? If so, what do you worry about?
I do. I have some weird quirks. OCD rituals and stuff. I feel grateful for everything I've experienced in my life. I always think of people that have lived a life of suffering and feel guilty for being able to skate and travel.

What are the top three weirdest things you've ever done?
Nothing immediately comes to mind. I'm weird.