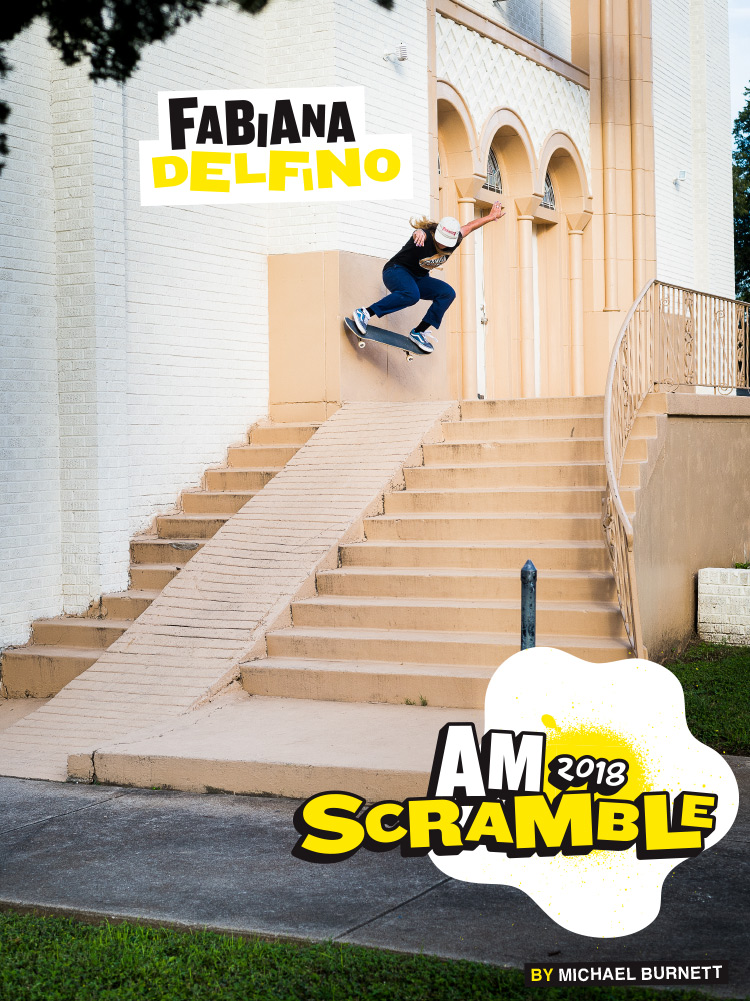 Are you back in Florida right now?
Yeah, I’m back now. I’ve been traveling the last few months but I guess I call Boca Raton my home still.

But you’re moving to Oceanside near San Diego, right? Why O’Side?
Being in Florida it’s hard to keep track of traveling and all of that and I feel like being in California and Oceanside is kind of the best move to get things going.

Are you a skatepark kid?
Yeah. I’m a heavy skatepark kid. It’s only recently I started skating street and DIY stuff. For the most part I grew up skateboarding at the parks.

Is getting kicked out of spots a new thing, too? Running from the cops and jumping fences, all of that?
I mean, somewhat. When I was younger I’d  go around street skating with my brother.  I was more of the filmer. I would never really skate but I remember him and his friends used to cause fucking chaos and piss the security guards off. I was running along with that, but recently I’ve been the one getting kicked out by the security guards but I try to remain respectful.

Do you ever feel stupid when you’re getting kicked out maybe for the second or third time and you know that you’re just being a complete dick?
Oh yeah, 100 percent. My friend who films lives up in Orlando so I went up skating for the weekend and there’s a trick I wanted to get at this parking garage and literally we were kicked out three times in that same day. The third time we ran down the stairs and the security guard was waiting for us and it was the fucking scariest moment, like we were trapped. But it’s also fun, like, that’s what makes it fun. 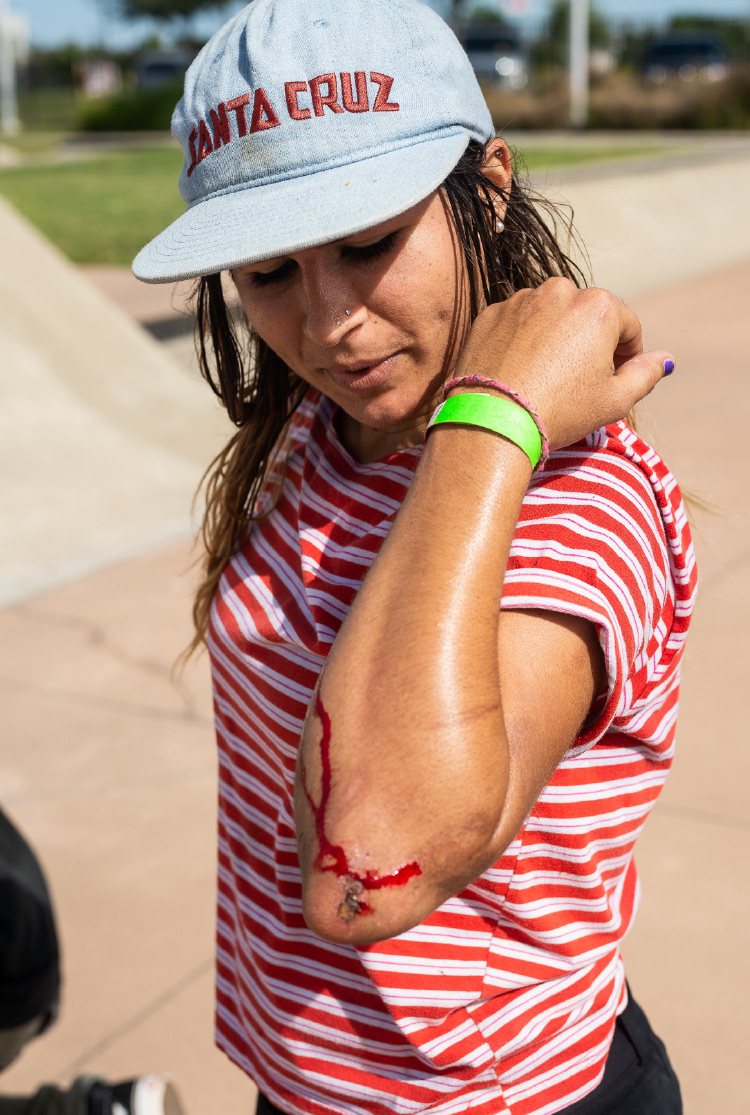 So what do you aspire to skate? Are you expanding your horizons beyond the parks?
I’ve always wanted to skate street. I’ve was kind of confined to the skatepark as a kid just ’cause it’s the safest thing. I guess that’s what my parents would say. But right now I’m trying to be in the streets as much as possible. I’m finding all these cool, unique spots that go with my skateboarding. So it’s just been so fun to find those spots. It’s been great.

What are your parents’ feelings about you guys skating?
Right now, dude, they’re completely head  over heels. They’re so stoked, which is rad because it just makes my brother and I super happy. As long as they’re happy we’re just so stoked. We’re traveling and having the time of our lives.

Your parents are from Venezuela, right?
Yes, they were born in Venezuela.

So your parents must know hardly anything about skating.
Yeah, they don’t really know too much, just the things that we’ve told them. But my dad is really into surfing so he kind of sees the parallels of it and gets his insight through surfing.

They weren’t always stoked on your skating, but now they’re coming around?
Oh yeah, completely. They’ve always liked that we’ve done things to the limit, but now they’ve fully embraced the opportunity that’s come along for us.

So how has your life changed in the last year?
It’s been so crazy. I’d like to say that my dream has come true. It’s picked up a lot just seeing all of these new places and meeting really rad people. It’s just been fucking so sick. Skating with Thrasher magazine? Like, that’s the ultimate.

What’s the meanest thing your brother ever did to you?
Probably not hitting me up to skate these really epic spots when we were younger.  He’d just go and not tell me. I guess there’s worse stuff but I have to think.

Do you get scared when you see Pedro knock himself out like that?
Yes. For sure. Even on the Am Scramble trip I’ve noticed myself not wanting to watch him skate directly. If he’s doing some crazy shit I’ll probably grab my phone and watch him skate through the video. I think that’s the only way I can watch him skate the crazy stuff. Those knock outs are no joke.

Have you ever knocked yourself out?
No. Knock on wood.

Were you scared when he grinded the big white hubba?
Oh God. The 18? I couldn’t watch that. I kind of set myself up to where I could see him grind the hubba but I couldn’t really see the landing spot. But it was sick; I saw most of it. It’s terrifying, but he’s got it. He’s a beast.

Now that you’re on Santa Cruz and you’re starting to travel more, is it different traveling with a bunch of dudes? Is a Skate Witch’s trip different than a Santa Cruz trip?
I wouldn’t say it’s too different ’cause you are out there skating and filming, but I guess these trips with teams are more focused on getting clips. So I guess it is a bit more serious. It’s a little different. I haven’t really been on too many trips with other girls but for the most part it’s the same. I guess you can let loose more with friends that are girls in some ways.

Was it intimidating when you first got on the trip with everybody?
Not really. I’ve always been around guys my whole life. The most intimidating part I guess would be how buck everyone was getting. It was, like, Holy shit, I’m in this van right now with the heaviest dudes. They were all super sick and super nice to me so it wasn’t bad.

Walking a body varial to sugarcane revert over the door at the massive Spring, TX, park

What’s been the biggest challenge thus far to get to where you are now?
I guess showing my legitimacy ’cause people don’t really understand the women’s realm of skateboarding or skateboarding in general. But I’ve kind of gotten over that bump and I’m just cruising at this point.

Who was your favorite skater as a kid?
Probably Elissa Steamer. She always stuck out to me big time.

Did you know she was from Florida, too?
No, I probably didn’t find that out until maybe five years ago. But yeah, when I found that out I thought that was so sick. I felt super connected with her, so it was rad. I haven’t met her yet.

Oh, she’s cool. You’d love her. She’s super nice. On this trip we saw how different people dealt with doing these tricks and the pressure and stuff. You had some guys that kept it real cool—you could see that Gabbers was really emotional and there was that moment when Kader crawled under the rail. Do you ever get that stressed out about skating or tricks? Have you ever been in those situations?
Yeah, I think so. I haven’t really reached that certain level of filming in the streets yet but I’ve been in situations at my local park or just skating, getting super pissed knowing I could do something and I guess not being able to put it on paper as they say. I guess I’ve gotten super frustrated and broken a board but never to the ultimate—I’ve never really cried from a trick yet.

Have you ever dealt with sexism in the skateboarding community?
Yeah, definitely.

Is it common?
I think it is common but it’s changing and it’s evolving. I think people are starting to realize that there shouldn’t be double standards for women. I mean, women still face it every day it’s just not as harsh, I guess. Like, there’s ways around it.

Who do you look up to as a role model as far as how they conduct themselves and how they skate—how their career is and how they hold themselves? Is there somebody out there in skateboarding that your really admire like that?
I guess it’s super cliché but seeing what my brother’s been doing for the past two years, where he is now and where I think he’ll be in the future, I really respect his work ethic and the relationships that he’s built with other people. That’s something that I kind of want to do as well. He definitely influences me a lot so I guess I’d say Pedro.

Who’s your 2018 Skater of the Year pick?
I’d probably say Grant Taylor or Jamie again. I don’t know. Pedro,  I guess? Am I allowed to say that? And Nora’s been killing it all year,  so she definitely deserves Skater of the Year. 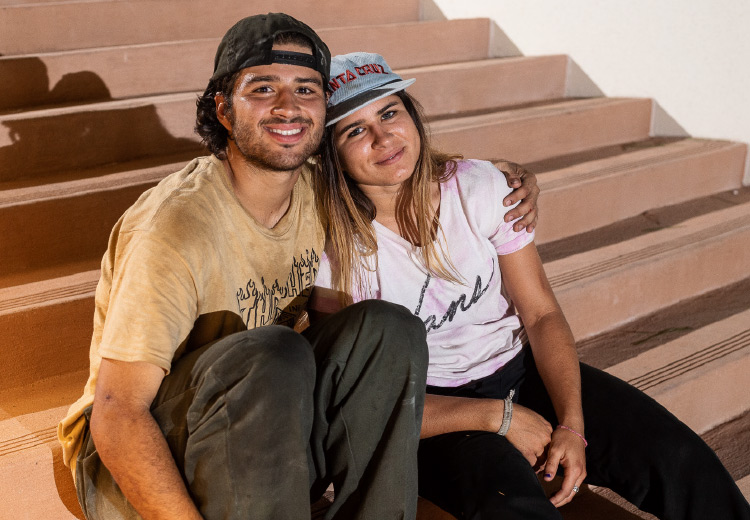